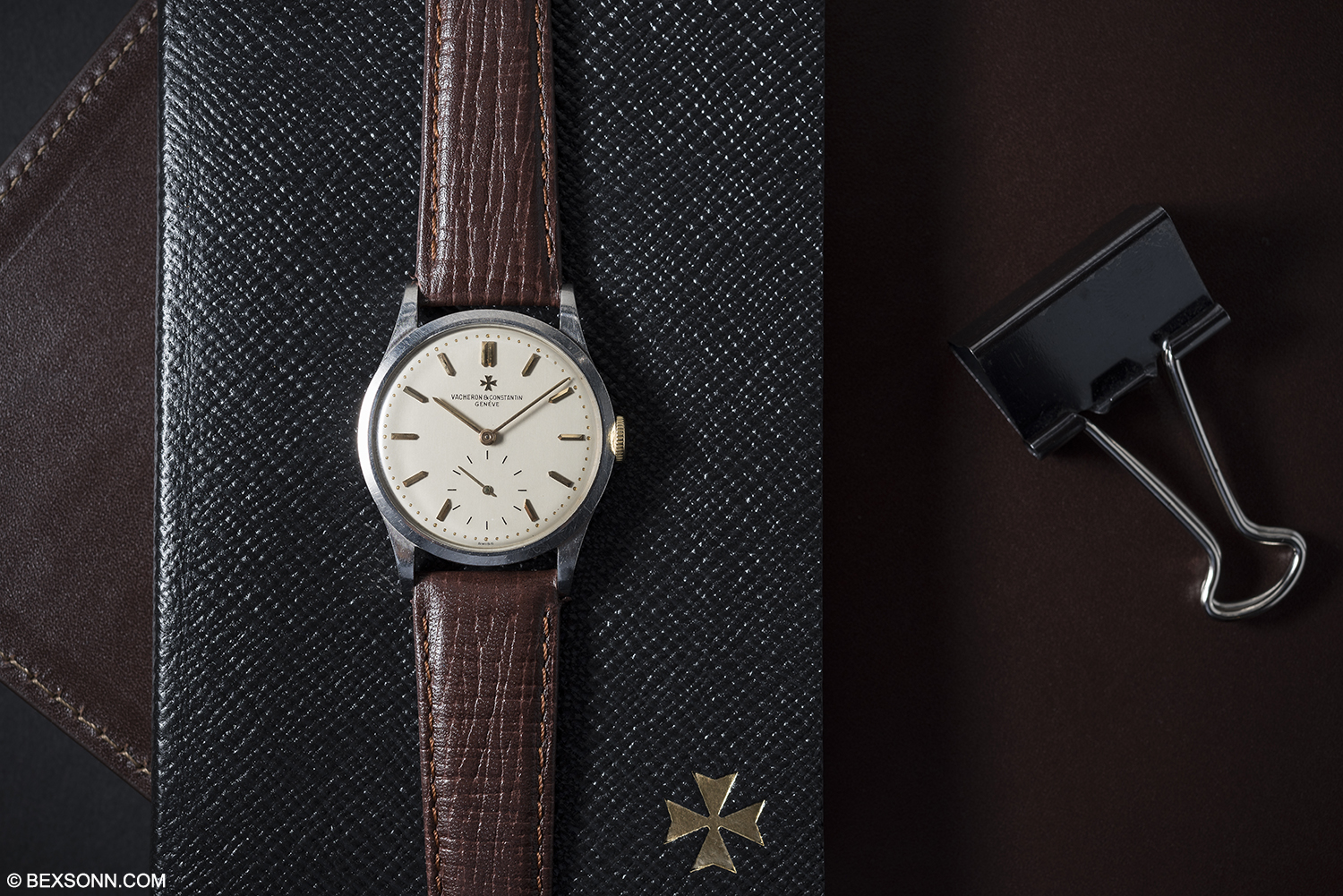 Watches of Knightsbridge June Auction: Like always, we recently spent some time over at 64 Knightsbridge to get up close with some of the timepieces in the upcoming June auction on the 20th. So we decided to round-up some of our favourite lots from the upcoming auction. The timepieces we highlight consist of: a rare Longines chronograph, the iconic Omega Railmaster, a seriously rare Rolex Chronograph that isn’t a Daytona, a Rolex Submariner that always gets noticed, a seriously cool Tudor Submariner and an absolutely stunning Vacheron Constantin. 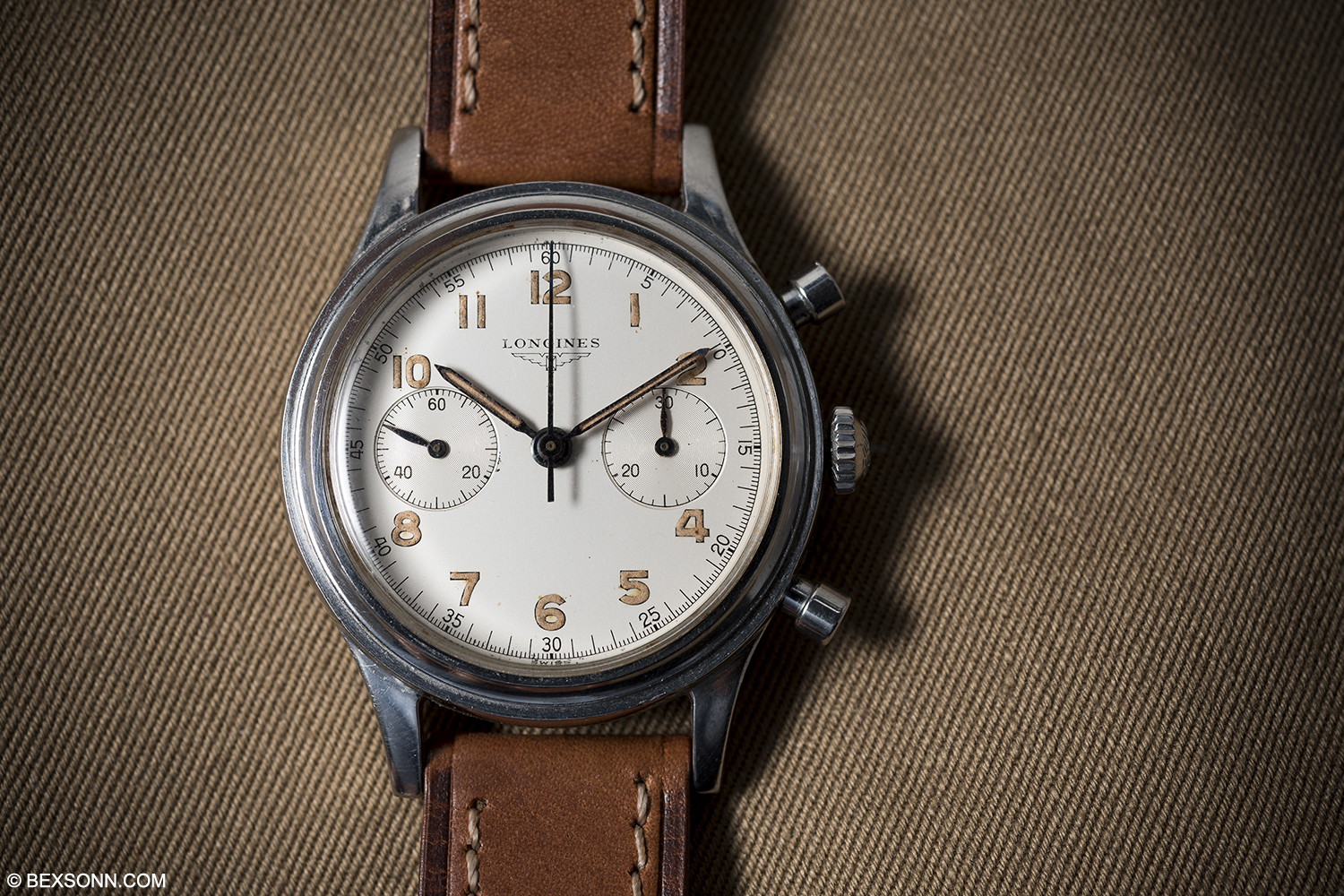 Lot 207: By now if you don’t already know, Longines are synonymous for creating excellent chronograph complications. In the mid-1930s Longines introduced one of the most extraordinary flyback chronographs, the calibre 13ZN that till this day is regarded as one of the greatest chronograph movements ever made, which has had a huge impact on prices today. However, in the late-1940s Longines also created another flyback chronograph that is also just as revered: the calibre 30 CH. Regarded by many as one of the finest and most beautiful wristwatch chronograph movements, it was sadly Longines last complicated in-house movement.

This rare and beautiful 1950s Longines ref. 6474-7 features a lovely aged, creamy dial with applied luminous Arabic numerals. Two subsidiary dials, recording minutes and continuous seconds. The stainless steel case measures a rather large for the time 38mm, with a screw-down case back. As mentioned above, beating away at the heart of this reference 6474 is the caliber 30 CH flyback chronograph, which is signed and numbered by Longines. This rare Longines Flyback Chronograph ref. 6474-7 is up for auction at an estimated price of £8,000 – £10,000. 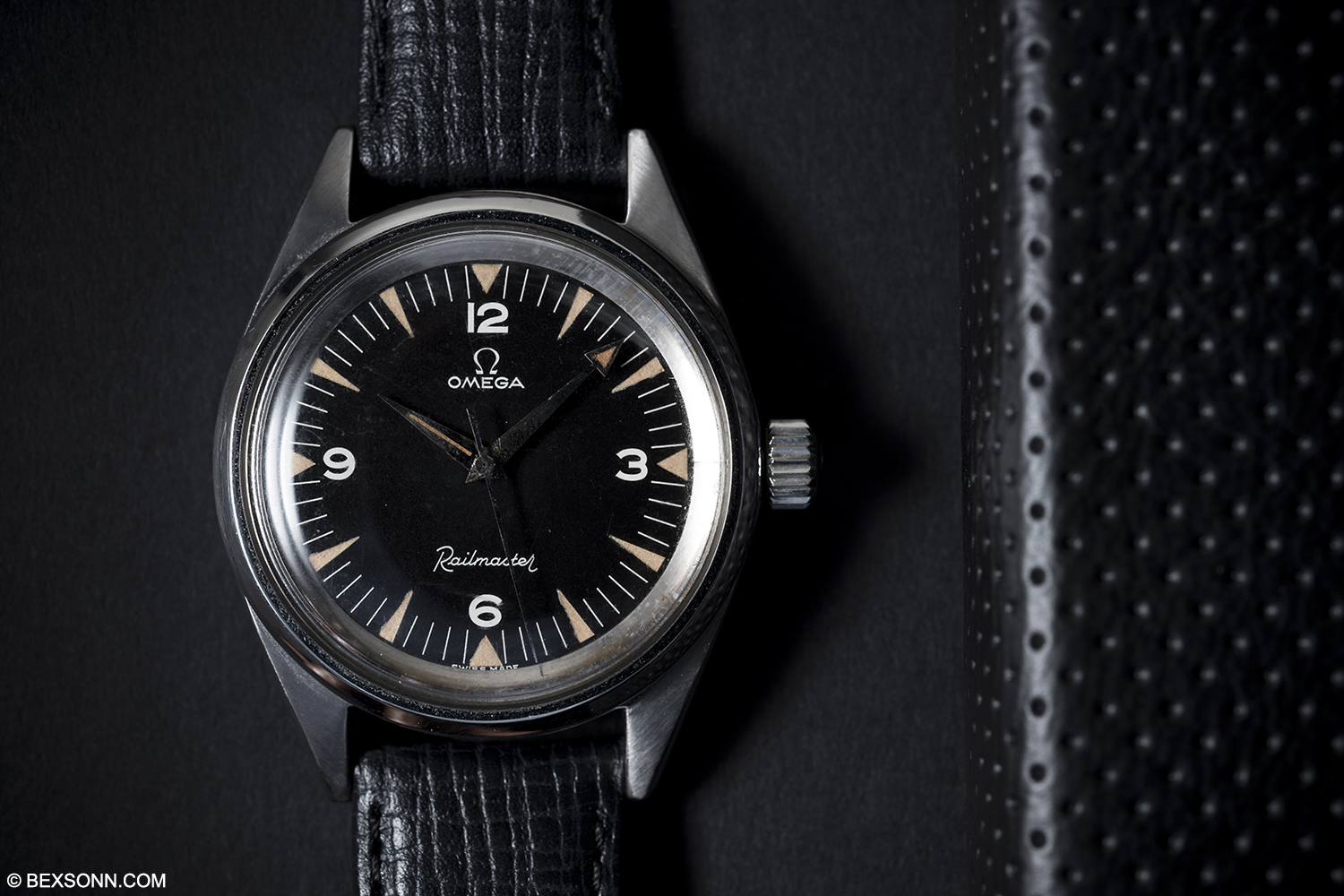 Lot 299: We’ve highlighted a Railmaster before: the CK2914-5. However this ref. 135.004 SC is a slightly later iteration. Probably not as well-known as its siblings it was released alongside the Seamaster CK2913 and Speedmaster CK2915. While the purpose of the Seamaster was made for professional divers and the Speedmaster made for car racers and those who needed to measure short periods of time, the Railmaster had a more interesting functional use; it was made for those who were working in strong magnetic field areas. It has a double housing case and a specially designed dial, it was made to withstand around > 1000 Gauss.

This 1960s Railmaster Ref. 135.004-63 SC features a matte black dial, which has aged perfectly and sports luminous inset markers and applied Arabic numerals at 3, 6, 9 and 12, with steel hands were only the minutes hand features a small arrow. Ticking away inside is the calibre 286 17 jewelled movement, signed and numbered by Omega. The 38mm stainless steel case sports a large Omega signed winding crown on a black leather strap. This Railmaster is up for auction at an estimated price of £4,500 – £5,500. 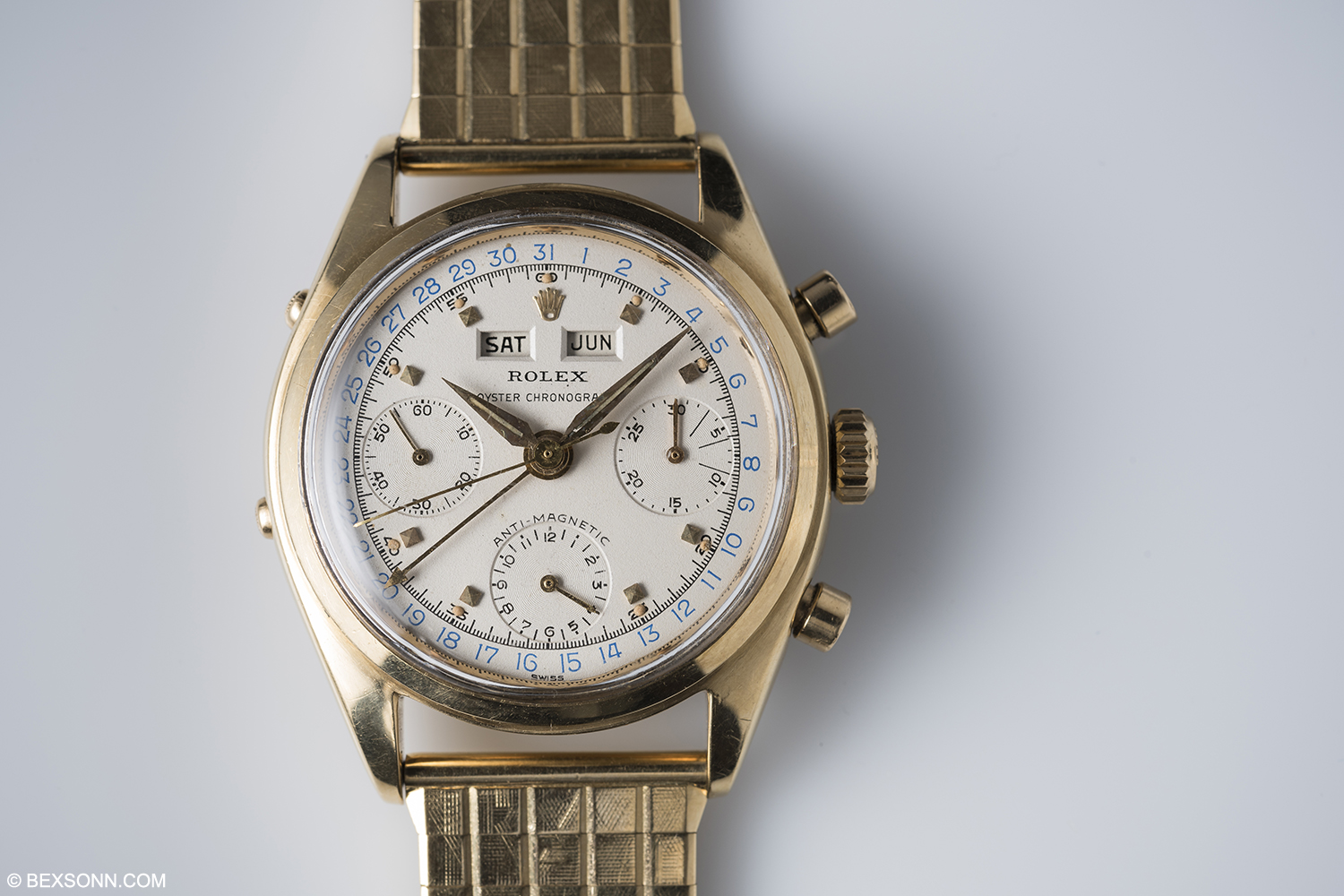 Lot 324: Just last month we highlighted a Rolex “Jean-Claude Killy” ref. 6236 from Phillips Watches Geneva Auction One. This month we are highlighting another Rolex “Dato-Compax”, however in the shape of the earlier ref. 6036 in 18-carat gold. As mentioned before the so-called Dato-Compax is the only Rolex Oyster model to have ever featured a full calendar and chronograph, which famed Olympic Skiing champion and Rolex ambassador Jean-Claude Killy just so happened to wear. In production for approximately 20 years, from the mid-1940s to the mid-1960s, during its lifespan only four references were made: the 4767, 5036, 6036 and the 6236. 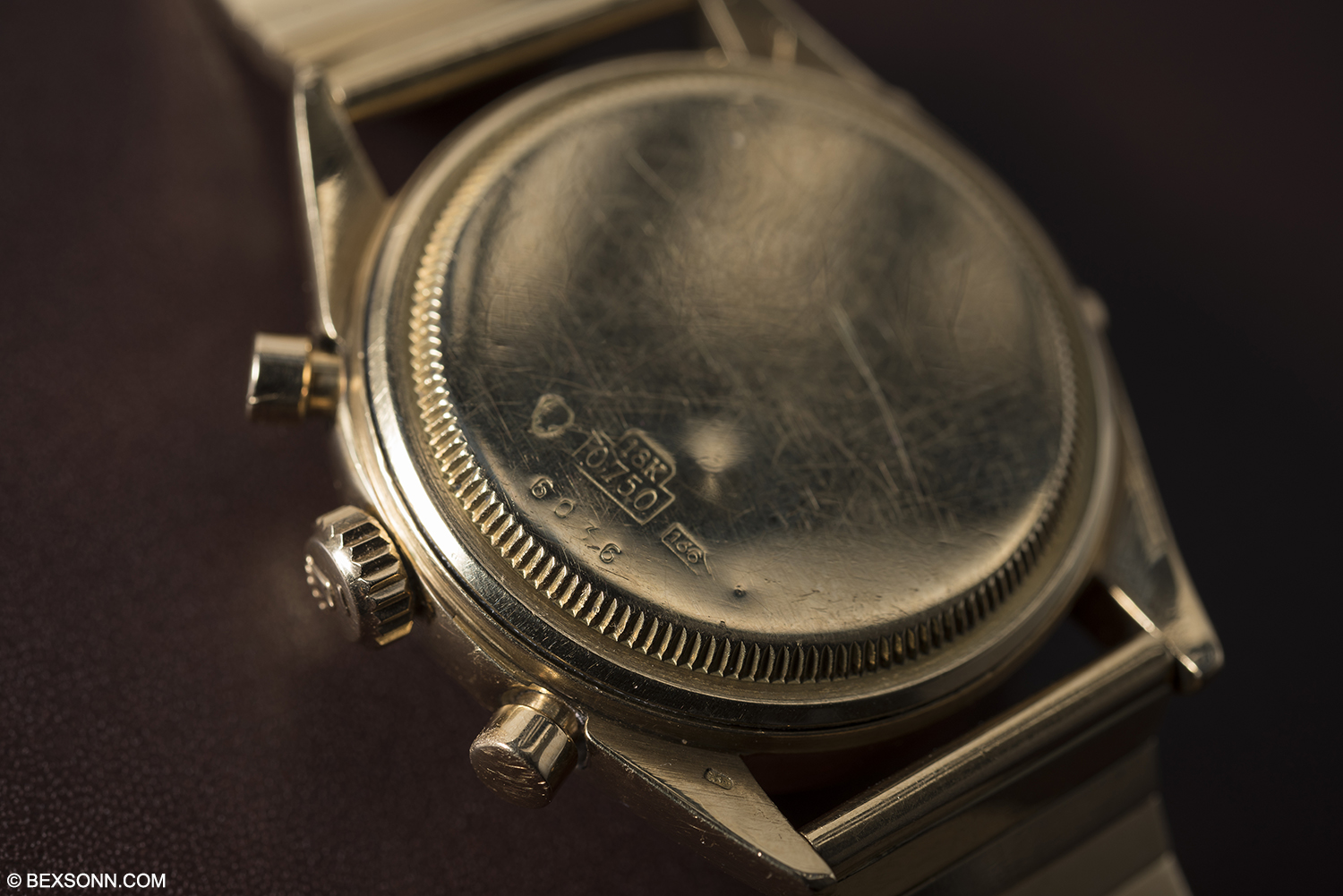 This 1950s Rolex ref. 6036 was consigned by the family of the original owner and features the original English calendar discs. The lovely aged matte white dial has gilt pyramid-shaped hour markers with lume plots too. The dial features 3 subsidiary dials at 3, 6 and 9 o’clock recording minutes, hours and continuous seconds. The dial features a blue 31-date scale, with date apertures either side of 12 o’clock and gilt Alpha hands. The case measure 36mm and inside this beauty is the Valjoux 72C, which comes on a rather unusual original Rolex armadillo 18-carat bracelet. This rare Rolex “Jean-Claude Killy” ref. 6036 is up for auction at an estimated price of £80,000 – £120,000. 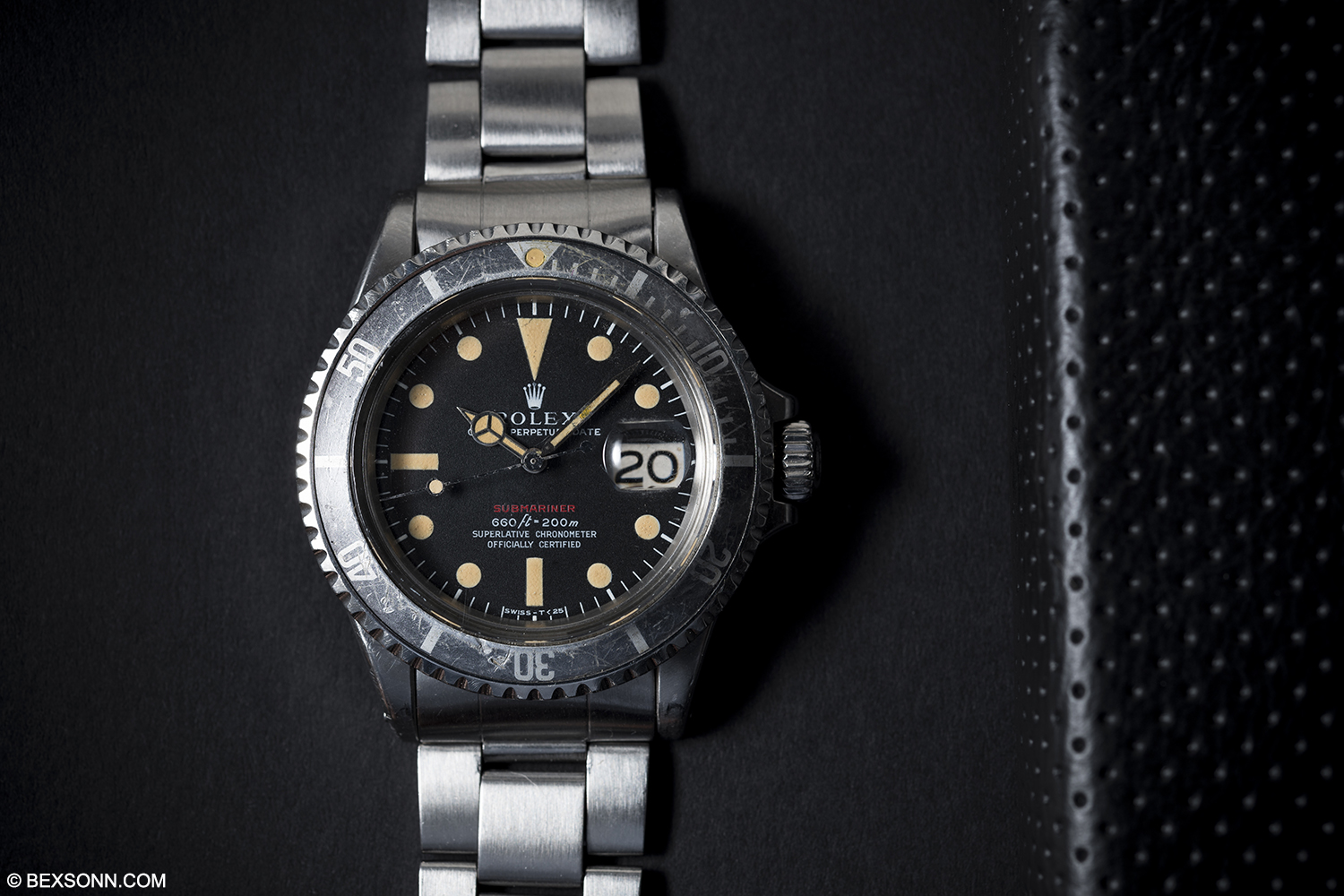 Lot 340: If you are into your Rolex then you’ll know what kind of price tags are attached to double red Submariners or Sea-Dwellers and it is these rarer pieces that collectors and aficionados like to have in their collections – they are after all grail Rolex timepieces. You see, the 1680 was the first Submariner which had a date aperture but while most were produced with Submariner written in white, there were a very small number of them that bore a single line of red writing instead. It is unclear as to why Rolex did this but I have been told that this was done early on to signify it features a date function.

This 1970s Rolex ‘Red Writing’ Submariner Date Ref 1680 features a matte black dial with applied luminous markers, date aperture at 3 o’clock and matching Mercedes hands. The 40mm Oyster case is in pretty good condition and has a faded rotating bezel that is quite sought after, and of course a Rolex triplock crown. Inside is the 26 jewelled automatic chronometer movement calibre 1570. This Rolex Submariner Date is up for auction at an estimated price of £7,000 – £9,000. 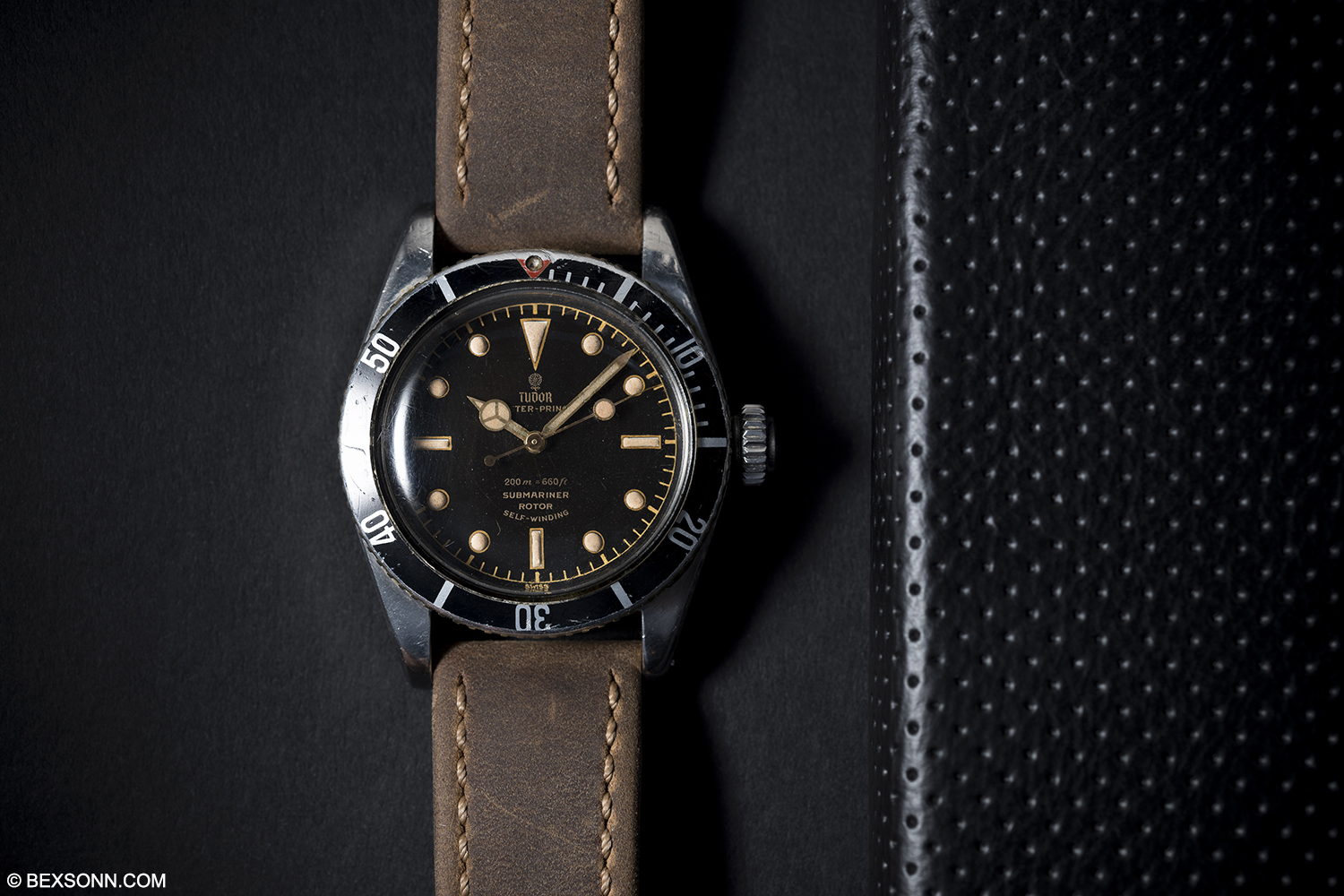 Lot 475: Just a couple of weeks ago I wrote an in-depth post on the Tudor Monte Carlo. I also mentioned that I’ve been immersing myself in the world of vintage Tudor timepieces and as it just so happens another gem has surfaced for the June auction. This stunning Tudor Submariner ref. 7924 “Big Crown” is arguably just about as good as it gets when it comes to vintage Tudor Subs. Dubbed the “Big Crown” by collectors due to its rather large 8mm winding crown, the 7924 looks rather similar to its predecessor the ref. 7923. However, with double the maximum immersion depth rating, the 7924 3mm case was made thicker and was also equipped with a thicker Plexiglass crystal that could withstand greater pressure.

This circa 1959, Tudor Submariner ref. 7924 features a black matte dial, with luminous markers that have age perfectly, a gilt chapter ring as well as font. It features the famed Mercedes hands, with a lollipop seconds hand. Ticking away inside is the self-winding “auto-prince” calibre 390 movement. As mentioned before the 38mm case has its original large Rolex Brevet crown and comes on a brown leather strap. This Tudor Submariner ref. 7924 is up for auction at an estimated price of £15,000 – £20,000.

Lot 489: Last but certainly not least is this Vacheron Constantin. There is nothing quite as cool as a stainless steel vintage Vacheron, though this particular piece also features a smidgen of gold but this all adds to the effect. The 4073 is the quintessential Vacheron Constantin Calatrava. Made in 18-carat gold, stainless steel and a bi-metal of both materials – there are a few variations to choose from. As you would have heard me mention before, dress watches made from stainless steel by Vacheron are somewhat rare and this particular example is in great condition.

This 1940s Vacheron Constantin ref. 4073 19, features a silver dial that has a warm, creamy patina. The dial also features gold ingot-style hour markers, gold lance-style hour and minutes hands and a subsidiary seconds’ dial at 6 o’clock. Inside is the, much revered, manual wound calibre P453/3B, signed Vacheron Constantin. The case measures 34mm in diameter, which is in-keeping during that period of time and it comes on a brown leather strap. This Vacheron Constantin is up for auction at an estimated price of £4,000 – £6,000

The Watches of Knightsbridge auction will take place on the 20th June 2015, make sure you visit the official website for this month’s full catalogue.