Heads-up on the Watches of Knightsbridge March Auction 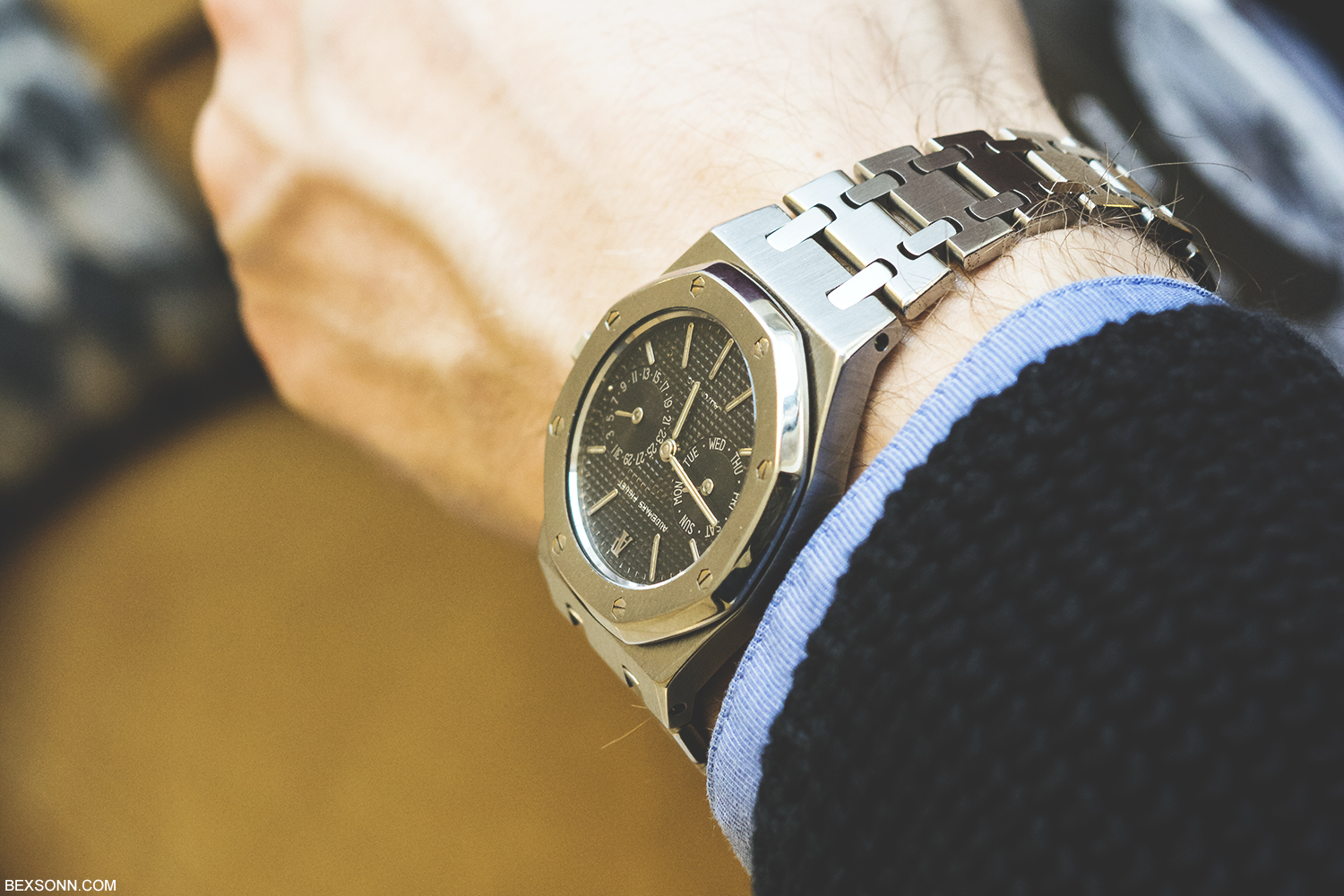 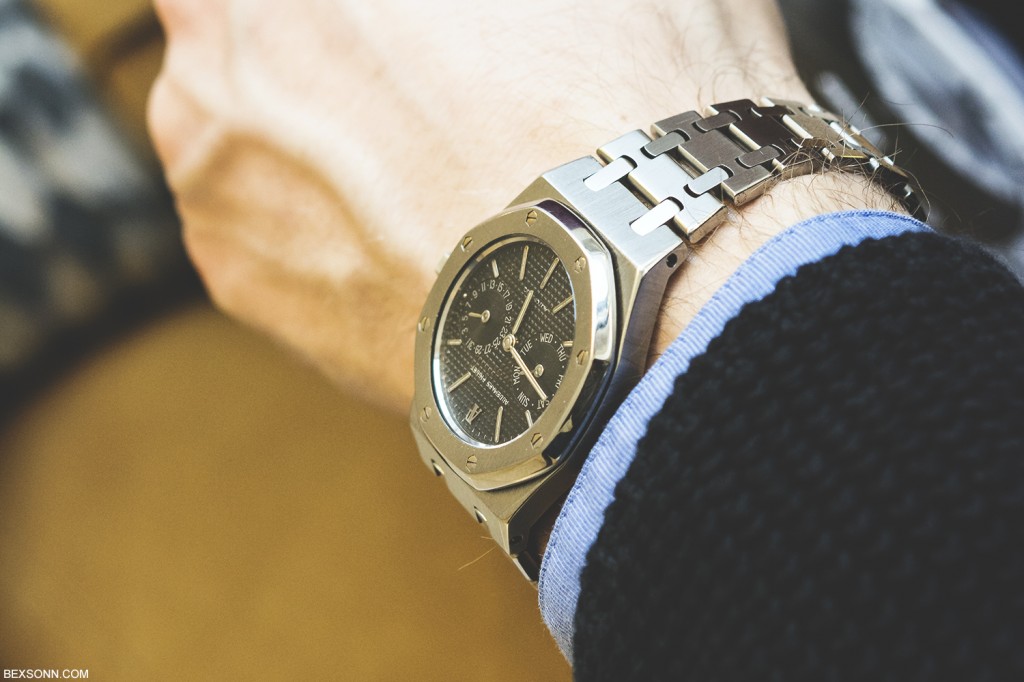 Last week we spent some time over at 64 Knightsbridge to get hands-on with some of the timepieces in the upcoming first auction of 2014 this March. There are quite a few, I’m sure, that many of you wouldn’t mind adding to your collection.  We have highlighted some of the more interesting pieces below consisting of; a 1980’s Audemars Piguet Royal Oak Day Date, a ridiculously cool 1945 18K Solid Gold Longines 13ZN, an awesome Rolex Submariner with pointed crown, a beautiful 1970’s Mark 1 Rolex Explorer II 1655 and a rather rare and sleek 1940’s gentleman’s Universal Geneve Tri-Compax Moonphase Triple Calendar Chronograph.

Lot 34: Up for grabs is this discontinued, beautiful and quite rare gentleman’s stainless steel Audemars Piguet Royal Oak Day & Date ref. 25572ST. Also known as the ‘Owl’ among AP aficionados because of the resemblance to the eyes of an owl but in my opinion it is one of the most beautiful Royal Oaks ever made, only second to the 5402ST of course. Originally launched in the early 1980s, this lovely 36 mm reference was discontinued in the early 1990s and later replaced by ref. 26330 fitted with a larger case measuring 39 mm. The dial on this Royal Oak Day & Date ref. 25572ST still features the ‘petite tapisserie’ with an AP logo at 12 o’clock and this early example of the Audemars Piguet Royal Oak Day & Date ref. 25572ST comes with a blade folding clasp like all Royal Oaks made between 1972 and the mid-80s. The clasp comes with the traditional flip-lock bearing the AP logo. 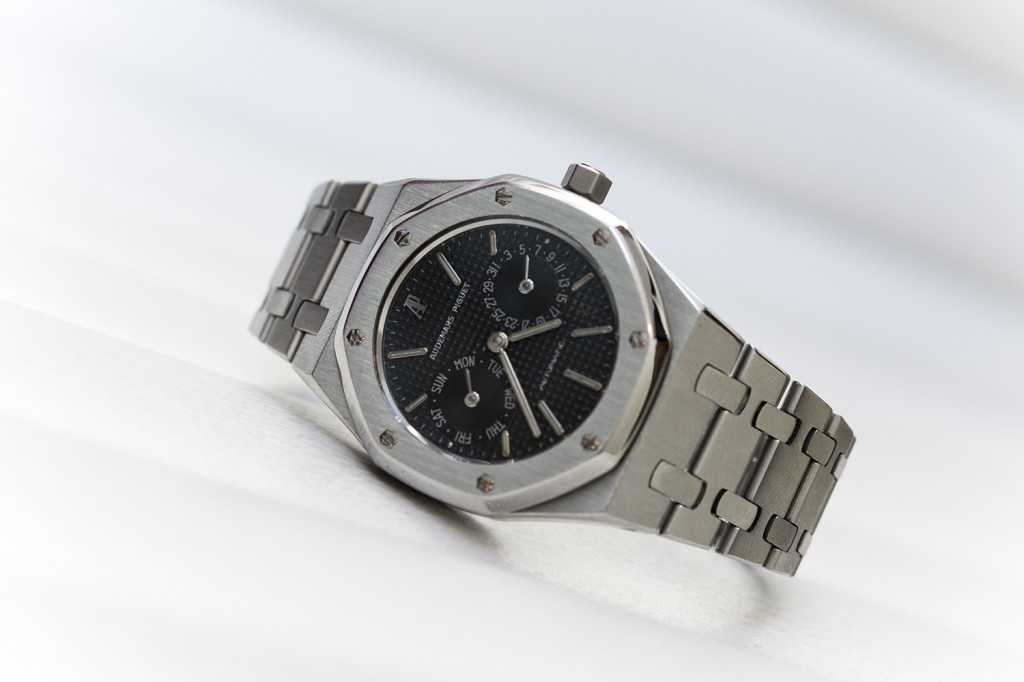 The movement inside this reference is the Audemars Piguet calibre 2124/2810. The first four numbers refer to the calibre itself and the last four to the day-date module used on said movement but be prepared to spend a small portion of your time setting the day and the date on ref. 25572ST as it is fitted with the rapid-advance feature but not with a quick-set mechanism. A trend for vintage Royal Oak’s hasn’t quite erupted as yet but I’m sure it will very soon and this may just be one of the rarer pieces that would be good to snap up now while possible. This classic Audemars Piguet has an estimated price of £4,200 – £5,200. 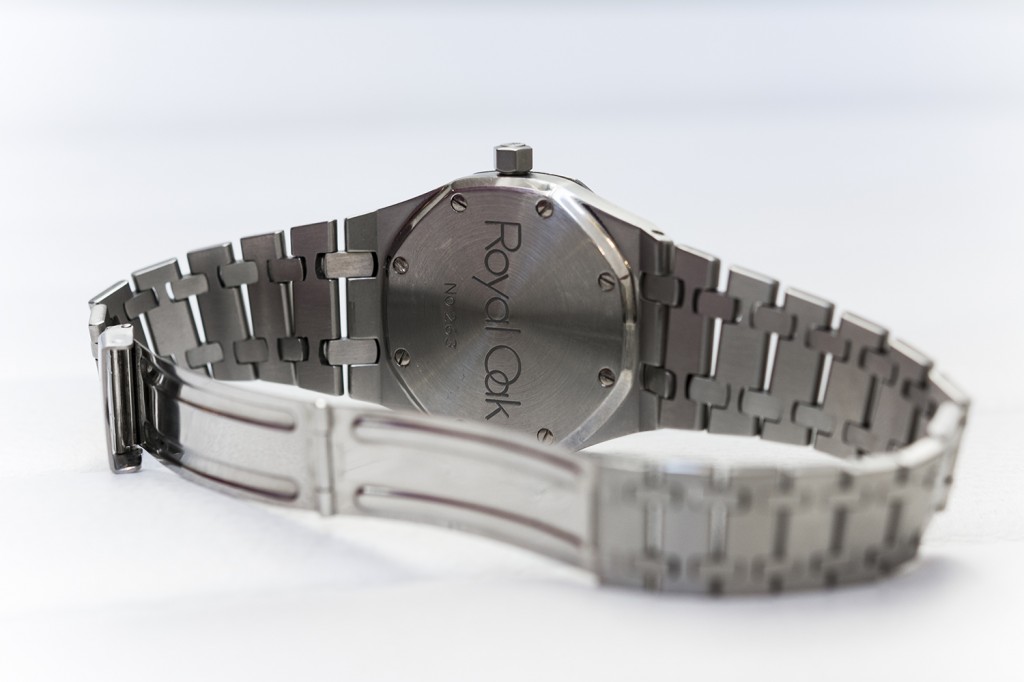 Lot 246: Next up is this ultra classy, vintage 1940’s 18K Solid Gold Longines 13ZN Chronograph. This Gold 13ZN features raised gilt hour markers, double subdial registers recording minutes and continuous seconds, with an outer base 1000 Tachymetre scale. Featuring the legendary 13ZN Longines signed movement with snap-back caseback. Measuring, at  a rather large for time, 38mm, you’ll find it doesn’t look out of place in this modern era of timepieces. This vintage Longines 13ZN is up for auction at an estimated price of £3,500 – £4,000. 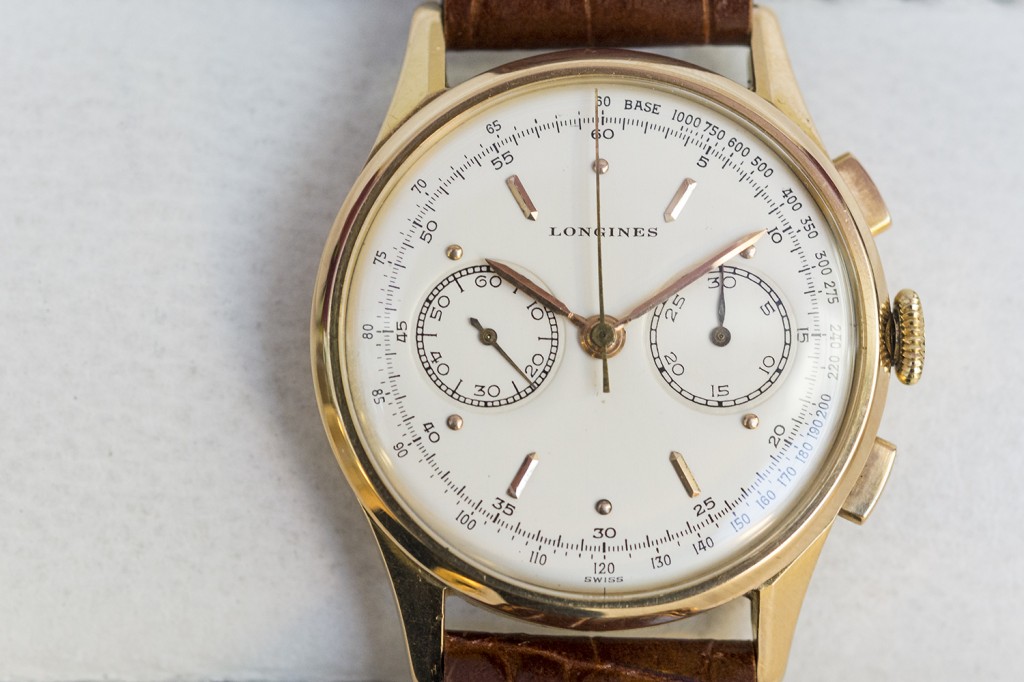 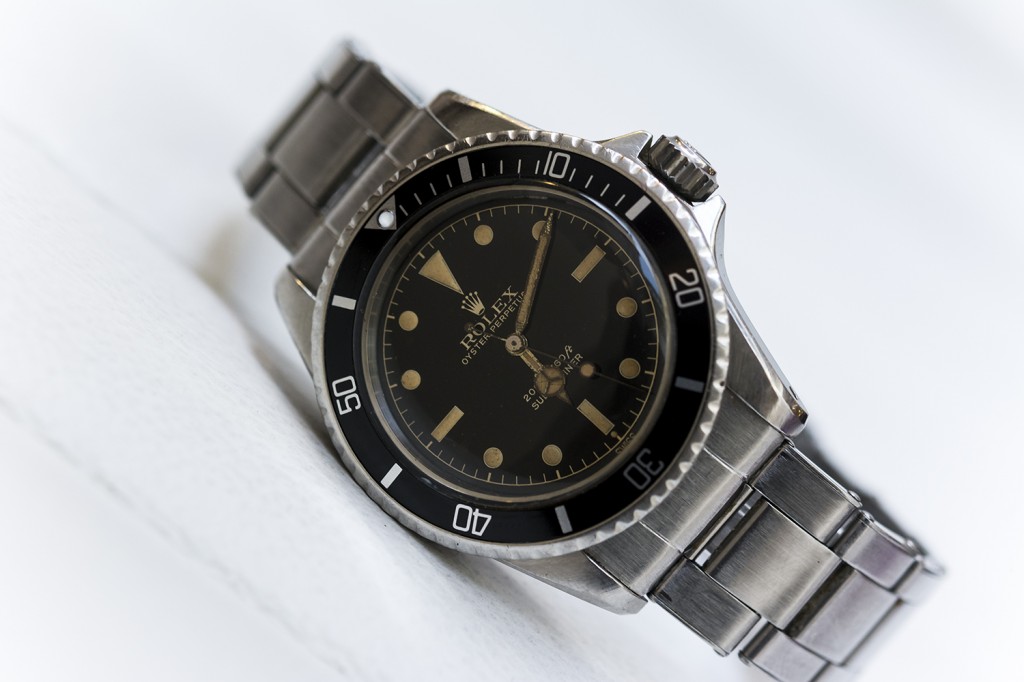 It also features a Meters first, Gilt as well as an exclamation point dial with chapter ring and these might seem like small details but these small details make up its rarity. At 39mm in diameter and on its original riveted Rolex bracelet, which is in excellent condition and has all the links, you’d be correct for guessing it will have quite a hefty estimated price tag attached to it. This Rolex Submariner has an estimated price of £5,000 – £7,000 but I’m sure it will exceed this amount. 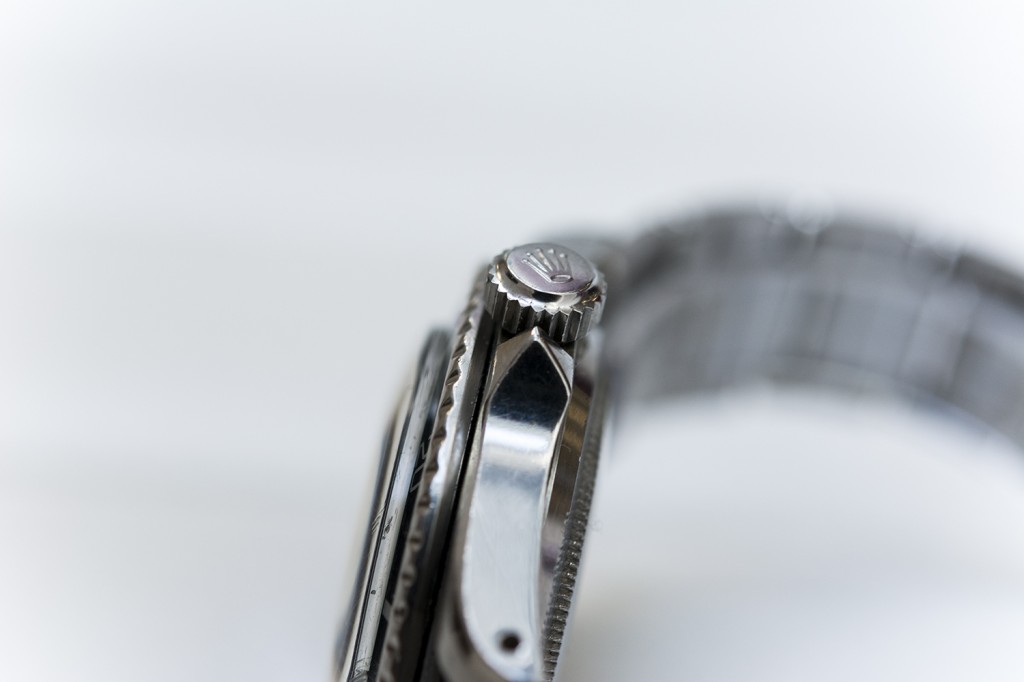 Lot 425: Another marquee Rolex, a 1971 Explorer II ref. 1655, with straight seconds’ hand. Now, these babies always get snapped up fast and I can’t see it being any different with this excellent example. Known to many as the “Steve McQueen Rolex” despite he is mostly pictured wearing his non-date Submariner? This Mark I has a straight seconds’ hand which is only found in the earlier examples, it also comes complete with original box and papers. It is quite difficult to find the earlier examples in this condition and for this reason, it makes this particular timepiece quite special; so be expected to pay a premium for it. This Rolex Explorer II 1655 has an estimate of £7,000 – £9,000 but I’d be surprised if it goes for less the £10K? 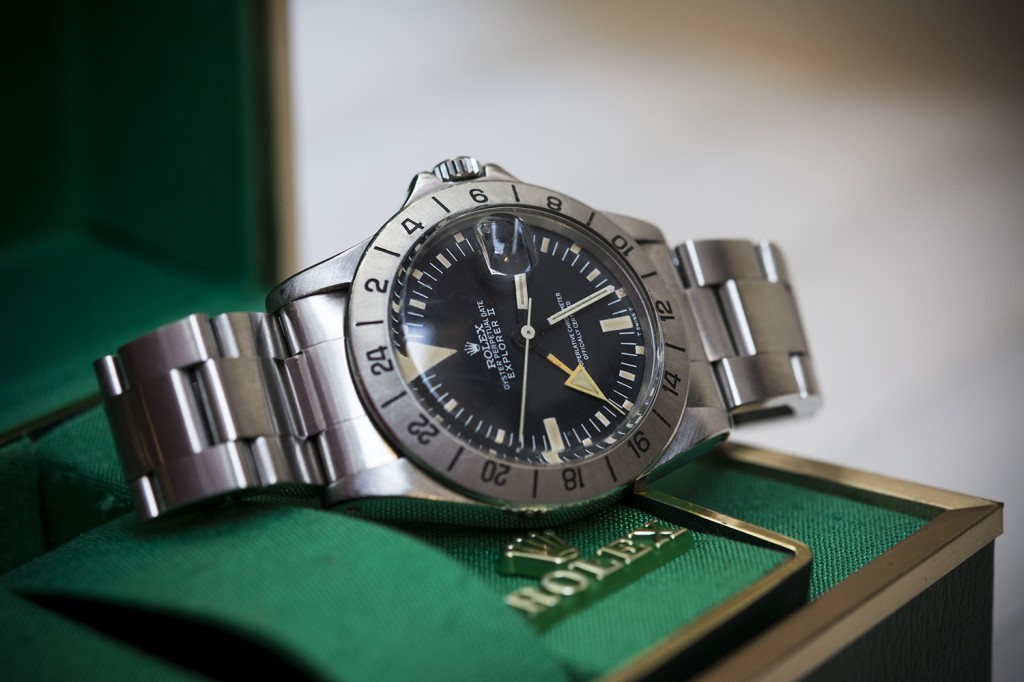 Lot 443: Last but certainly not least is this beautiful 1940’s gentleman’s Universal Geneve Tri-Compax Moonphase Triple Calendar Chronograph ref. 22250. A brief insight into Universal Geneve: In the 1930’s Universal Geneve came to prominence with the dual push-piece chronograph and chronograph wristwatches with a 12-hour register, which brought about quite a significant change in chronograpic functions. This innovation was followed by the “Compur” range and, in 1936, the “Compax”. In the space of only a few years, Universal developed a succession of prestigious models: The “Uni-Compax”, the “Dato-Compax”, the Medico-Compax and in 1944, marking their Golden Anniversary, the “Tri-Compax”; which was officially presented at the Basel watch fair in 1944. 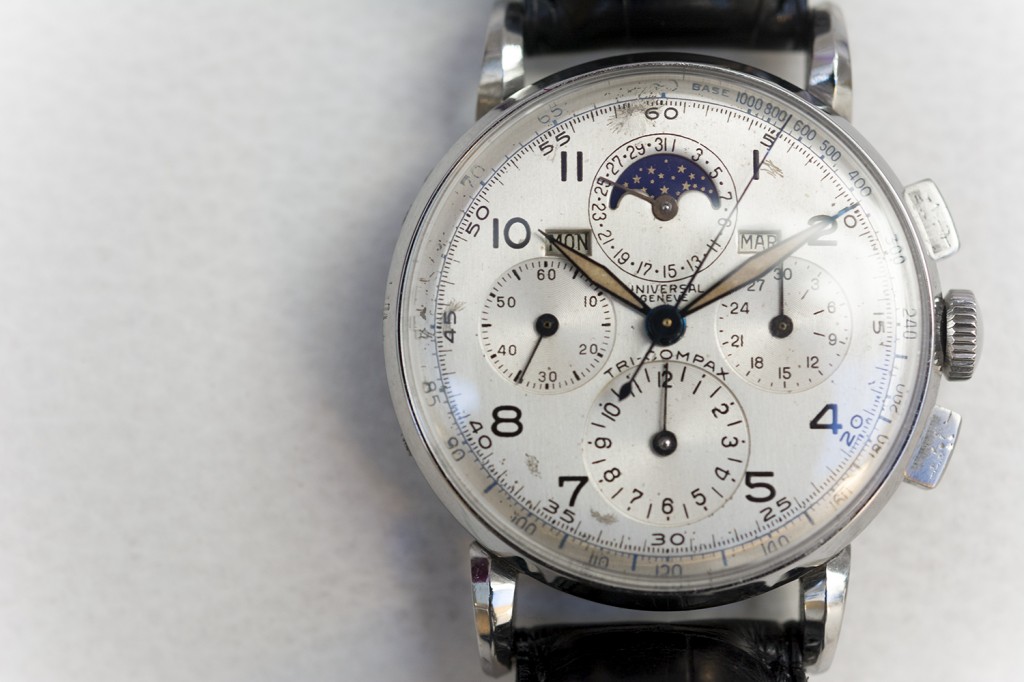 Now, it is very rare to find a watch of this calibre in such immaculate condition. It features a silver dial, with Arabic numerals and four sub-dials; recording hours, minutes, continuous seconds and a displaying date with moonphase, as well as day and month apertures at 10 and 2 o’clock respectively. It also features unusual bombay-styled lugs and inside this timepiece is a manual wind Universal Watch Co. signed 481 calibre movement. As it is from the 1940’s the case may be a bit on the small side for some measuring 34mm in diameter. This Universal Geneve is up for auction at an estimated £1,500 – £1,800, which in my eyes is an absolute bargain considering what you are getting. 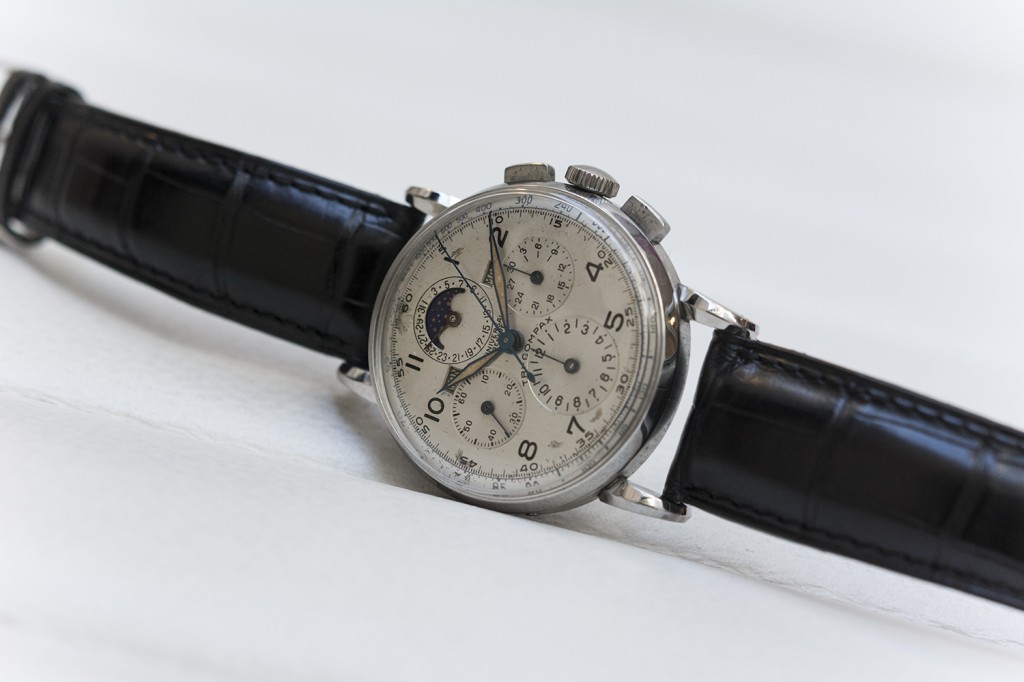 The Watches of Knightsbridge auction will take place on the 15th March 2014, so be sure to visit the official website for this month’s full catalogue. 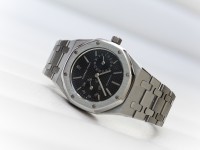 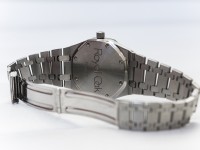 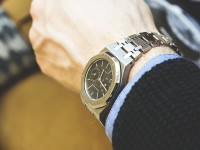 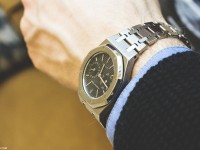 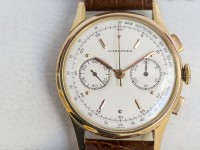 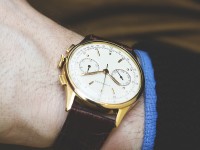 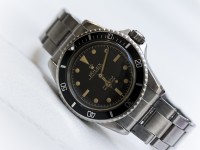 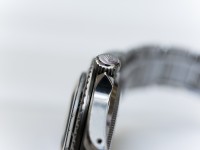 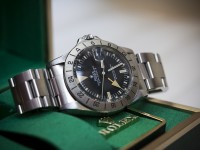 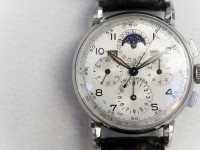 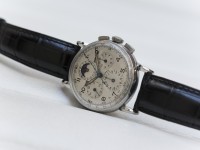