Watches of Knightsbridge September 2015 Auction: Last week we spent some time over at 64 Knightsbridge to get hands-on with some of the timepieces in the upcoming September auction on the 12th. Like always we decided to pick out some of our highlighted lots and share our thoughts on them. The timepieces we highlighted consist of: a must have iconic Omega Speedmaster 2998, a Rolex Daytona with a so called “Patrizzi Dial”, an extremely rare Rolex Dato-Compax “Jean Claude Killy”, an ever-growing rare Rolex Explorer 1016 and a seriously old rare Rolex Datejust. *Updated* with a seriously cool British Military Issued Omega Seamaster 300. 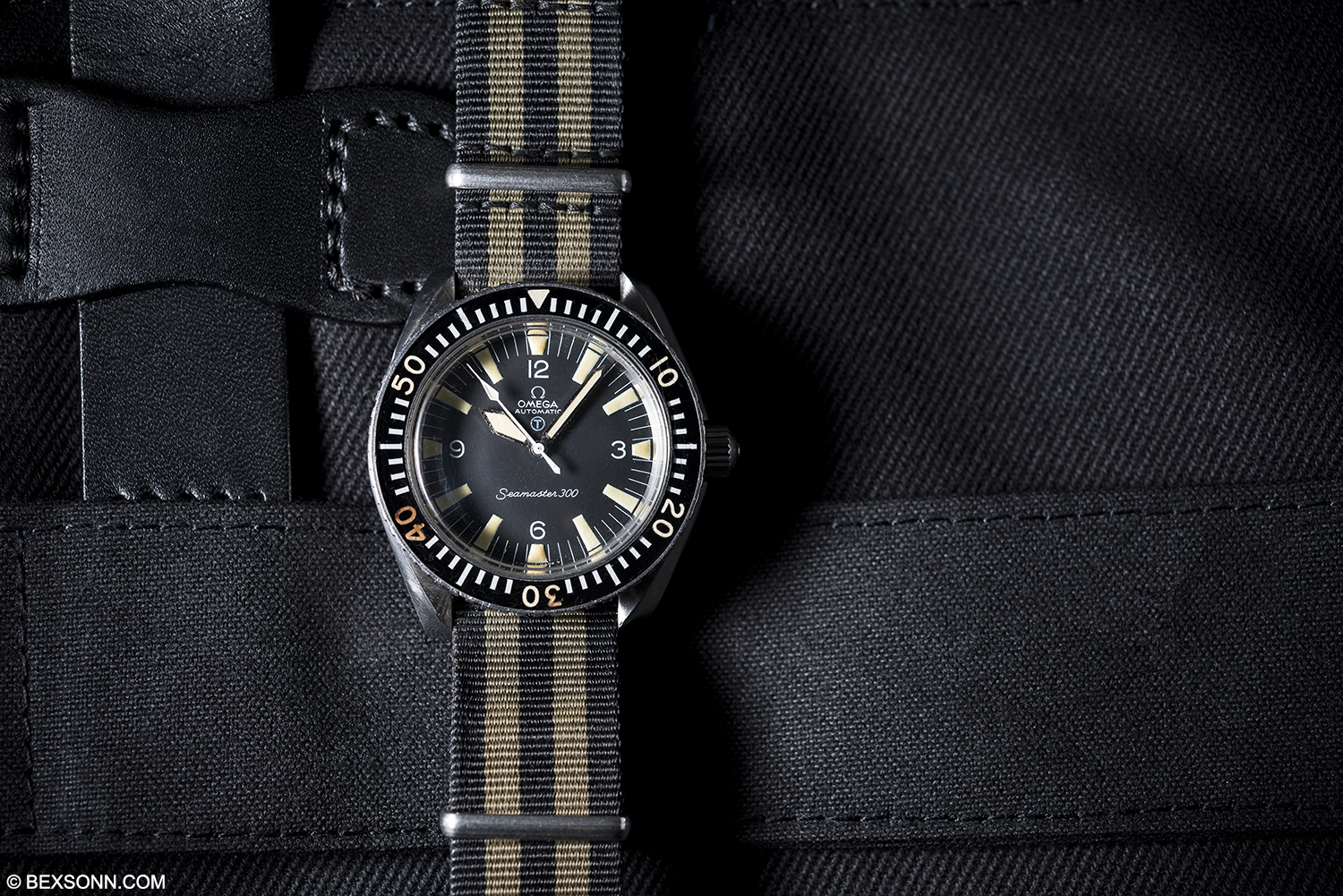 Lot 210: We’ve never really touched on the subject of military timepieces before, so this is in fact a first but it is as good of a place to start as any. Why? Well of late, Military Seamaster 300’s have come into their own and have been gaining quite a bit of interest, this may have something to do with one that was recently sold by Bonham’s? Whatever the reason these watches are cool, perhaps not as cool as the CK2913’s in my opinion, but these bombe lug variants still demand respect. The first Military Seamaster 300’s were introduced in 1967 with a standard dial and sword hands. Some featured Naiad crowns, which was Omega’s version of the triplock crown. All military SM300 wristwatches featured engraved numbers on the back, the letter ‘T’ in a circle on the dial (denotes the use of Tritium) and fixed bars. 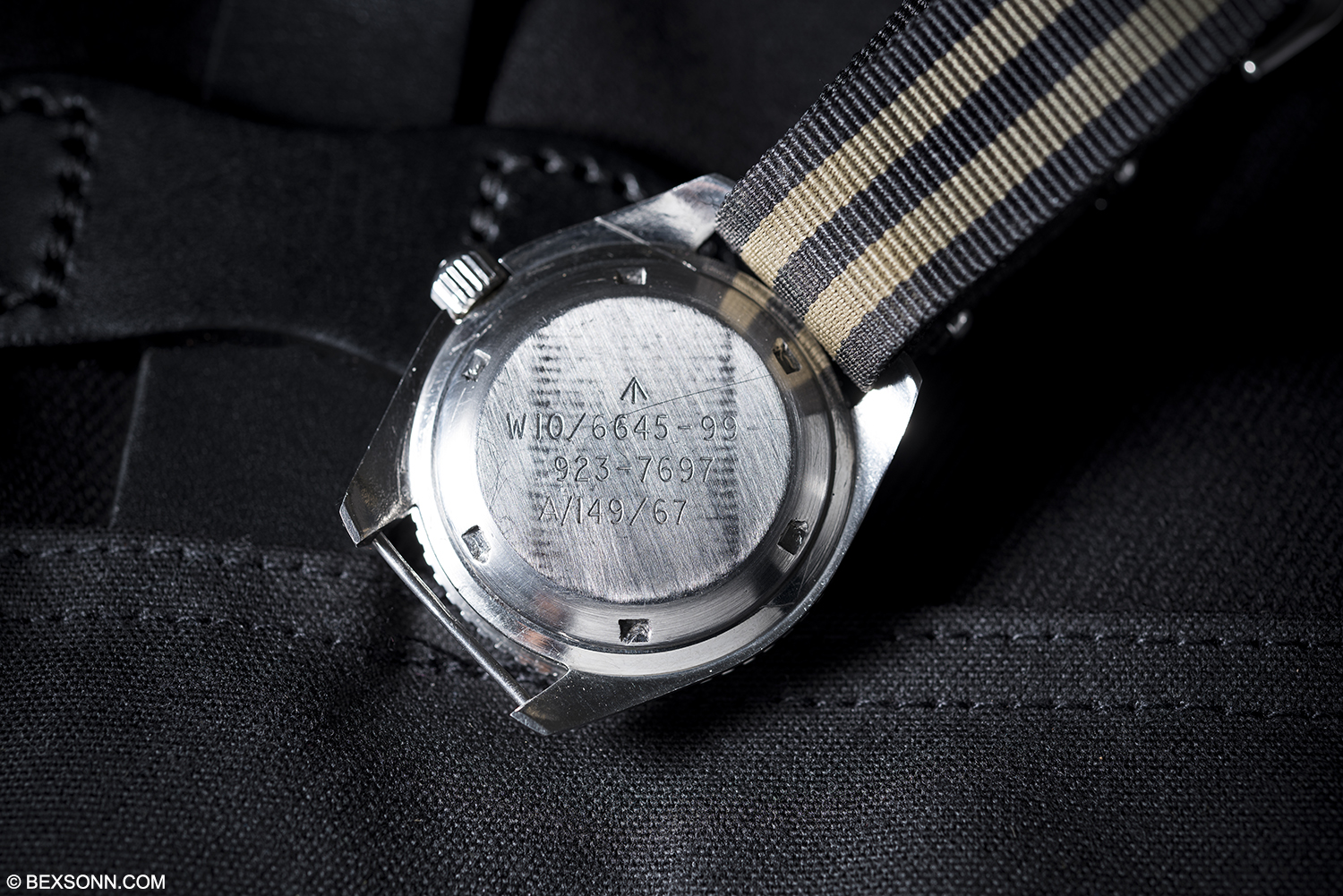 This rare Military Seamaster 300 from 1967 sports a black matte dial with Arabic numerals and tritium hour markers. It sports steel sword minute and hour hands. Inside is the , 24 jeweled, calibre 552 automatic movement. The 42mm Military case is fitted with fixed lugs and features a screw down crown and a 60 minute rotating bezel, where the 3 of 30 and the number 40 have discoloured, which adds a nice touch. Of course being a Military issued Seamaster 300, on the case back are issue markings, which you can see in the image above. This rare British Military Omega Seamaster 300 is up for auction at an estimated price of £7,000 – £9,000. 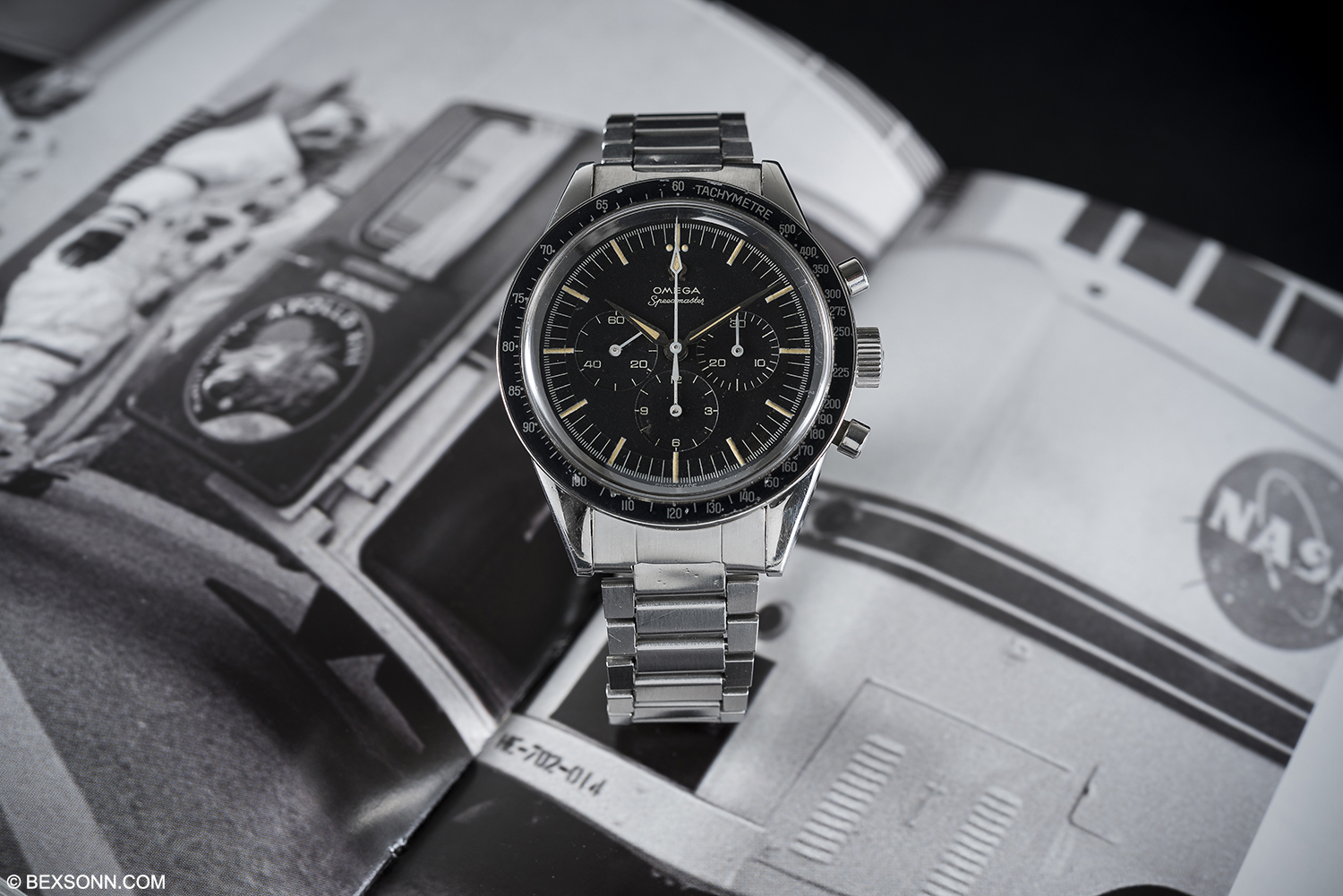 Lot 236: If you didn’t know by now that we (I) like a good Omega Speedmaster, then this is probably your first time in reading such an article here on BEXSONN.com. There is just something about them and in all honesty, these are becoming much, much harder to find in this condition. I would probably go as far as to say CK2998’s are just as rare as Rolex Daytona’s from the same decade, or even more so. The CK2998 is one of my favourites from the pre-moon era of Speedmaster’s and is in fact the first Speedmaster to be worn in space by Walter “Wally” Schirra during the Mercury program’s sigma 7 mission.

This rare Speedmaster CK2998-62 is the 4th and last variant of this reference. It sports a black matte dial with luminous markers, three subsidiary dials, recording hours, minutes and continuous seconds. As the last variant, it features steel Alpha minute and hour hands and white matchstick sub dial hands. Inside is the revered caliber 321 movement. The 40mm case is fitted with a black Tachymetre bezel that is not period correct but still has the desired look. This rare Omega Speedmaster reference CK2998-62 is up for auction at an estimated price of £6,000 – £8,000. 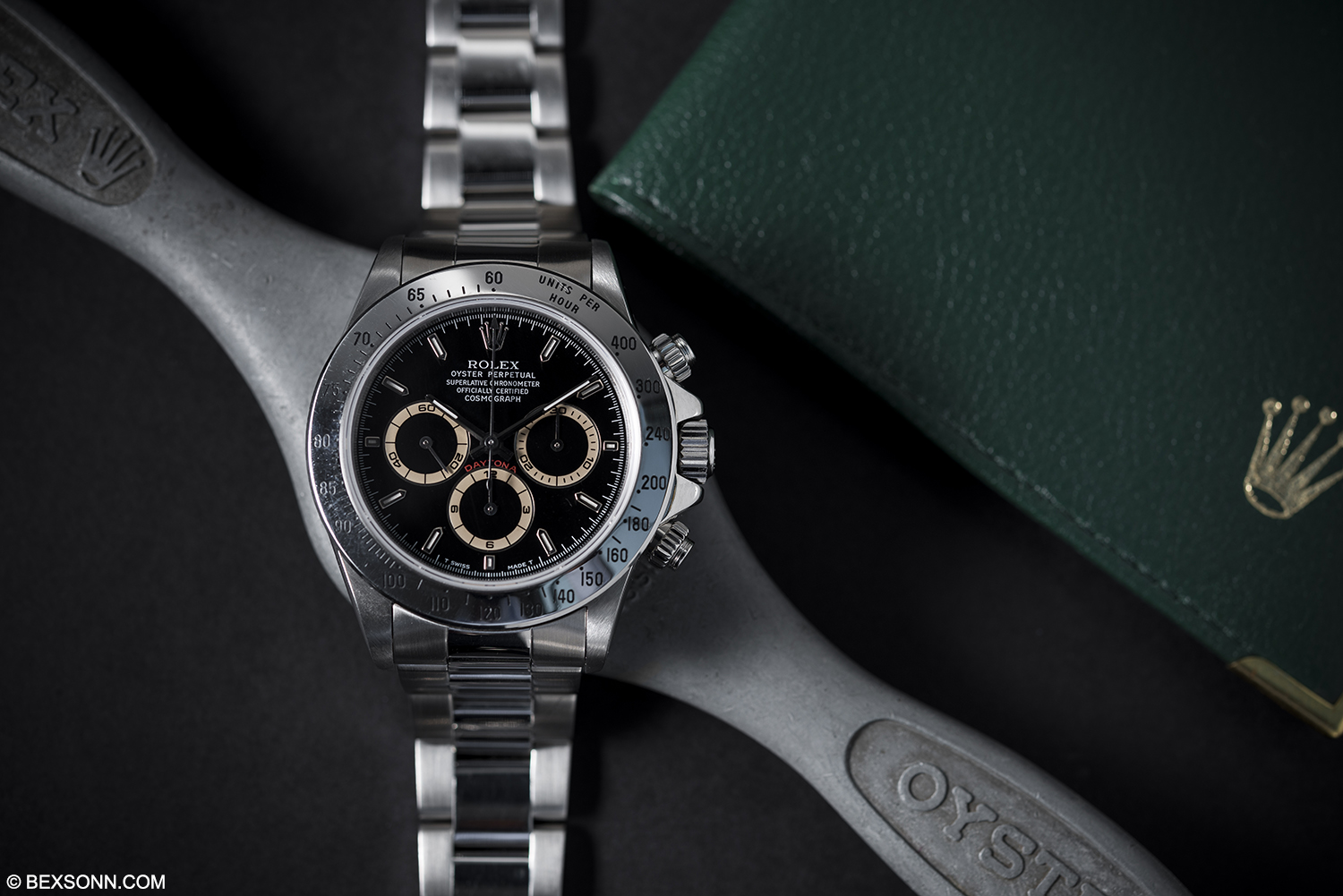 Lot 284: I don’t usually highlight Daytona’ from the nineties but this one is so well worth it. Daytona’ have changed massively over the years and probably the most significant of them all was the move from manual-wind to automatic movements. It was in an era when Rolex didn’t produce any in-house automatic chronograph complications, so they sourced one of the greatest of them all: the Zenith El Primero. Ordinarily this wouldn’t be anything to shout about but this particular Daytona features what is know as a Patrizzi dial but just what is that? If you look closely at the three sub dial registers you’ll see that the chapter rings have turned an off-white cream and in some cases can even turn a dark brown, but why the name? Well, it is said when Rolex collector Osvaldo Patrizzi sold a large portion of his collection it included a Daytona, which sub dial chapter rings had discoloured due to exposure to ultra violet – hence the name.

This 1995 Daytona ref. 16520 features a black gloss dial with luminous inlaid white gold batons, the aforementioned discoloured triple subsidiary dials, recording hour, minutes and continuous seconds. Inside is the El Primero based calibre 4030. The 39mm case on this particular example is in excellent condition. This Rolex Daytona “Patrizzi” is up for auction at an estimated price of £7,000 – £9,000. 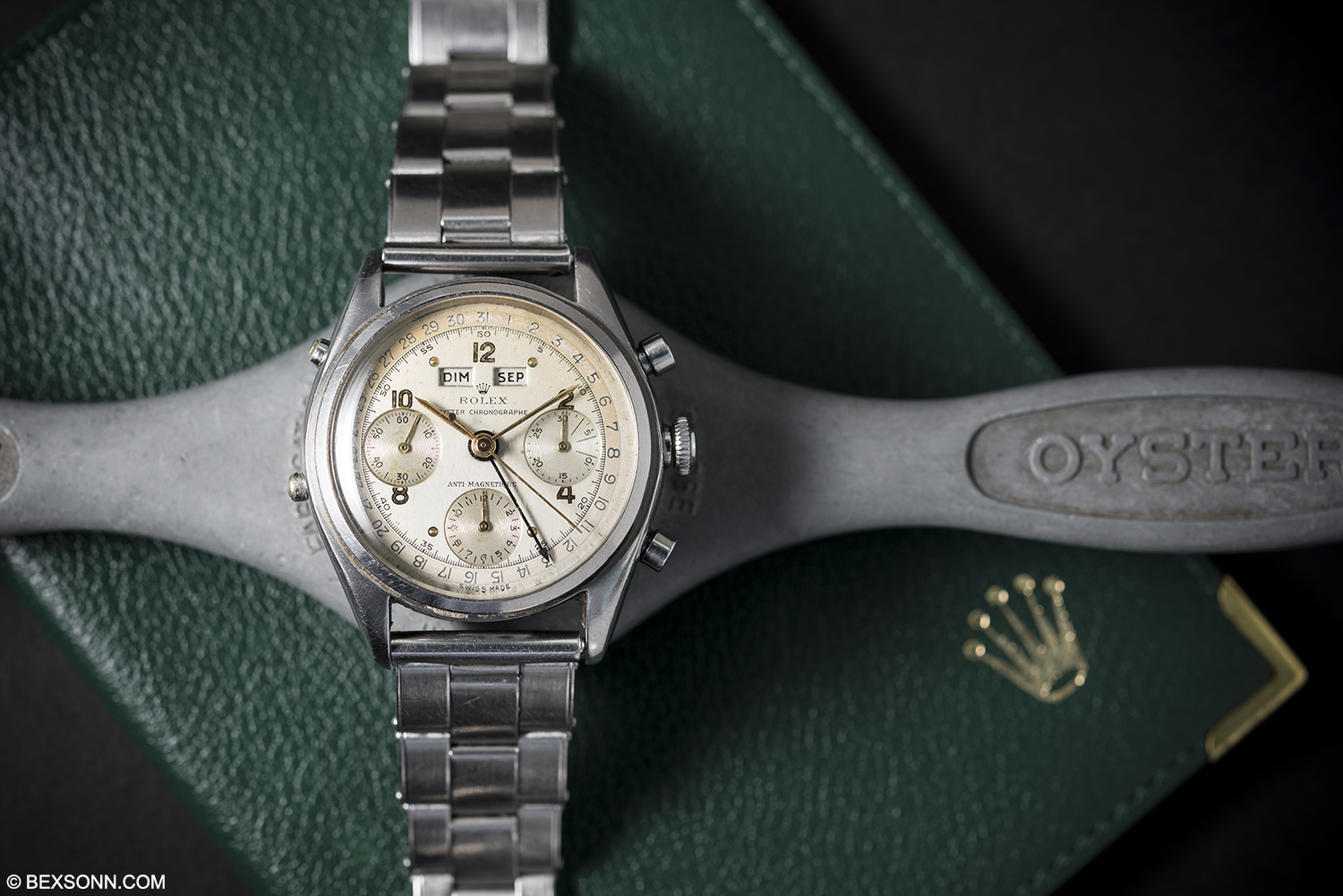 Lot 289: It would appear these rare Rolex Dato-Compax’ are like buses – you wait for one and three come along. A few months back we featured a 6236 from Phillips Auction One and at the last Watches of Knightsbridge auction in June we featured a 6036. This month we are highlighting another Rolex “Dato-Compax”, however, in the shape of the very first ref. 4767 in stainless steel. As mentioned before the so-called Dato-Compax is the only Rolex Oyster model to have ever featured a full calendar and chronograph, which famed Olympic Skiing champion Jean-Claude Killy just so happened to wear. In production for approximately 20 years, from the mid-1940s to the mid-1960s, during its lifespan only four references were made: the 4767, 5036, 6036 and the 6236. It would now appear we are only missing a 5036 to make it a full house of Dato-Compax’. 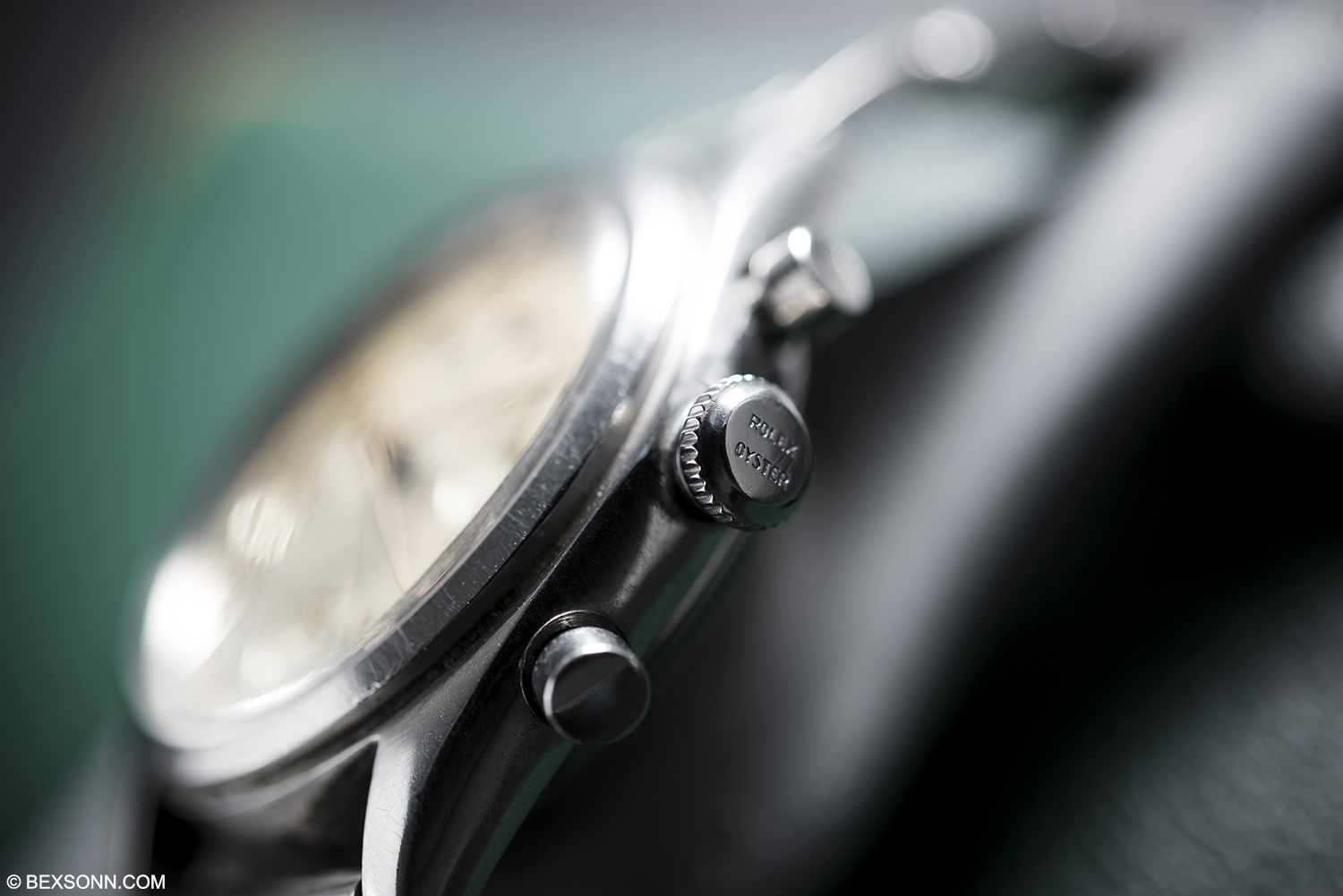 This 1940s Rolex ref. 4767 features a two-tone silver dial with bi-hourly Arabic numerals & dot markers. Three subsidiary dials recording accumulated hours, minutes and continuous seconds. It sports day and month apertures in French, as well as an outer date calendar, with a steel-blue arrow hand and also gilt hour, minute, and chronograph hands. Beating away at the heart of said timepiece is a Cal. 13”’ 17 jeweled manual-wound movement, which is signed by Rolex. The 36mm case is nicely complimented by a later Oyster expandable riveted bracelet, which in my opinion is rather fitting. This rare Rolex “Jean-Claude Killy” ref. 4767 is up for auction at an estimated price of £60,000 – £80,000. 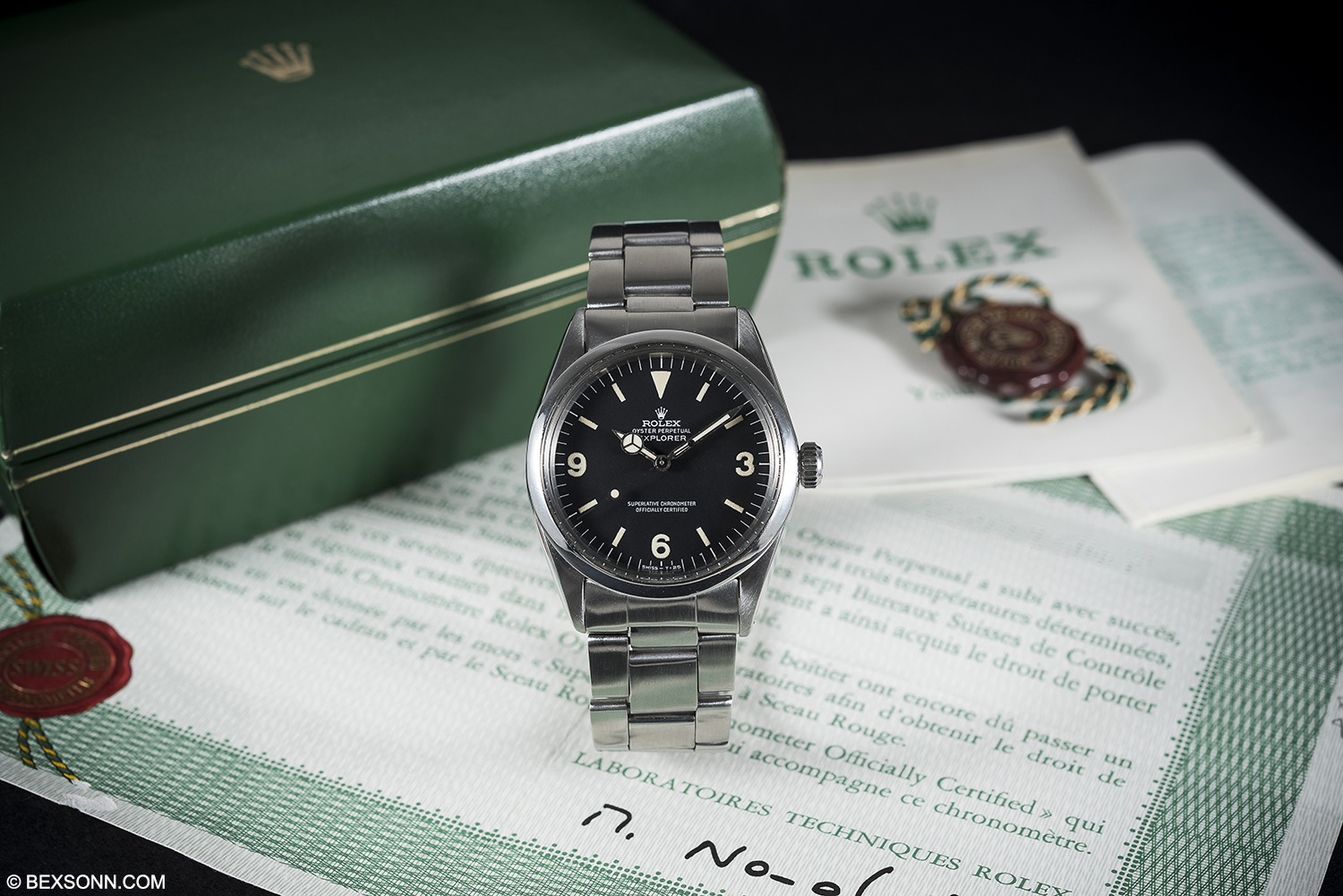 Lot 314: You are probably wondering why I highlighted this Explorer 1016, well it would appear these are getting harder to find in this kind of condition and this particular example comes with box and papers. I am a massive fan of the Explorer but it has to be vintage and this particular ref. 1016 is an excellent example. The Explorer ref. 1016 is the most common series made and was in production for over 25 years and I think it is just one of those classics that every Rolex fan should have in their collection.

This circa 1969 Rolex Explorer ref. 1016 has a matte black dial with applied luminous markers, 3-6-9 Arabic numerals and Mercedes hands. Inside this Explorer ref 1016 is the 26-jewelled automatic calibre 1570 movement, signed Montres Rolex S.A. The case measures a classical 36mm, which is in good condition and sports a Rolex Oyster bracelet. As mentioned this ref. 1016 comes complete with box and papers. This Rolex Explorer reference 1016 is up for auction at a price of £5,000 – £6,000.

Lot 322: There are Datejust’ and then there are Datejust’! This my dear readers is the latter. When you think of Rolex, undoubtedly you automatically think of the Datejust. It is a timepiece that Rolex have been producing for many, many years before any other serially produced timepiece from their range. You see the impact the Rolex Datejust had on the 20th century watch market was immense. It was an automatic, waterproof timepiece, with instantaneous jump date aperture and this particular piece was given the reference 4467 and so named the Datejust. There is just something about these early reference Datejust’ that make them so downright cool; the absence of a Cyclops, the roulette date disc and the inscription of ‘DATEJUST’ written in red – these little details make all the difference. 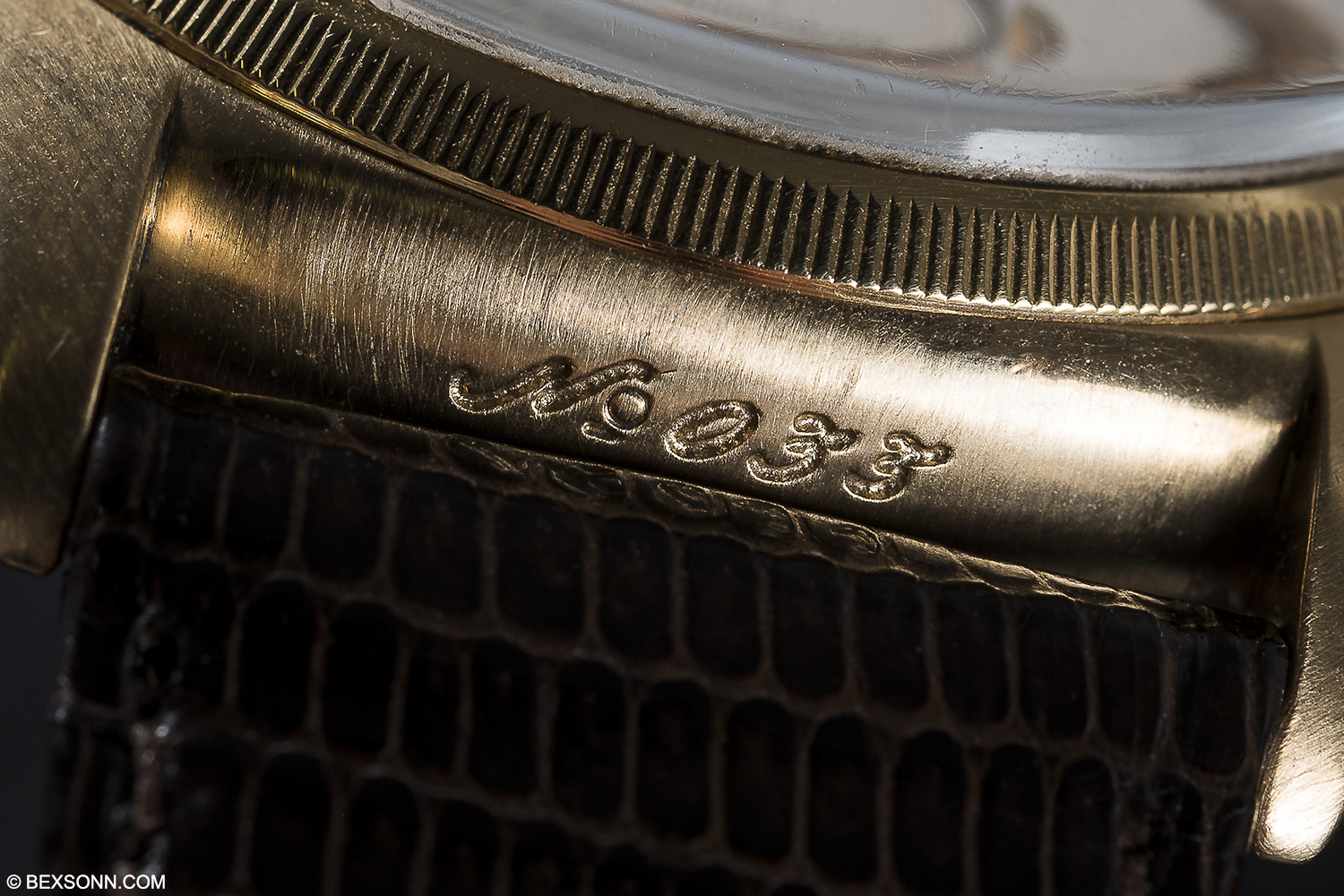 This circa 1945, Rolex Datejust ref. 4467 features a silver dial with gilt batons, which displays signs of ageing. It sports dauphine hands, a red and black roulette date wheel and as mentioned the inscription of ‘Datejust’ written in red. Inside is an automatic ‘big bubble back’ movement, signed Rolex. The 36mm case features Oyster crown and the iconic finely fluted bezel. The Datejust is presented on a Rolex leather strap with matching pin buckle. It is thought that this particular example is one of the first 350 ever produced and therefore sports an unusual number engraving between the lower lugs of No.33. This Rolex Datejust ref. 4467 is up for auction at an estimated price of £10,000 – £14,000.

The Watches of Knightsbridge auction will take place on the 12th September 2015, make sure you visit the official website for this month’s full catalogue.