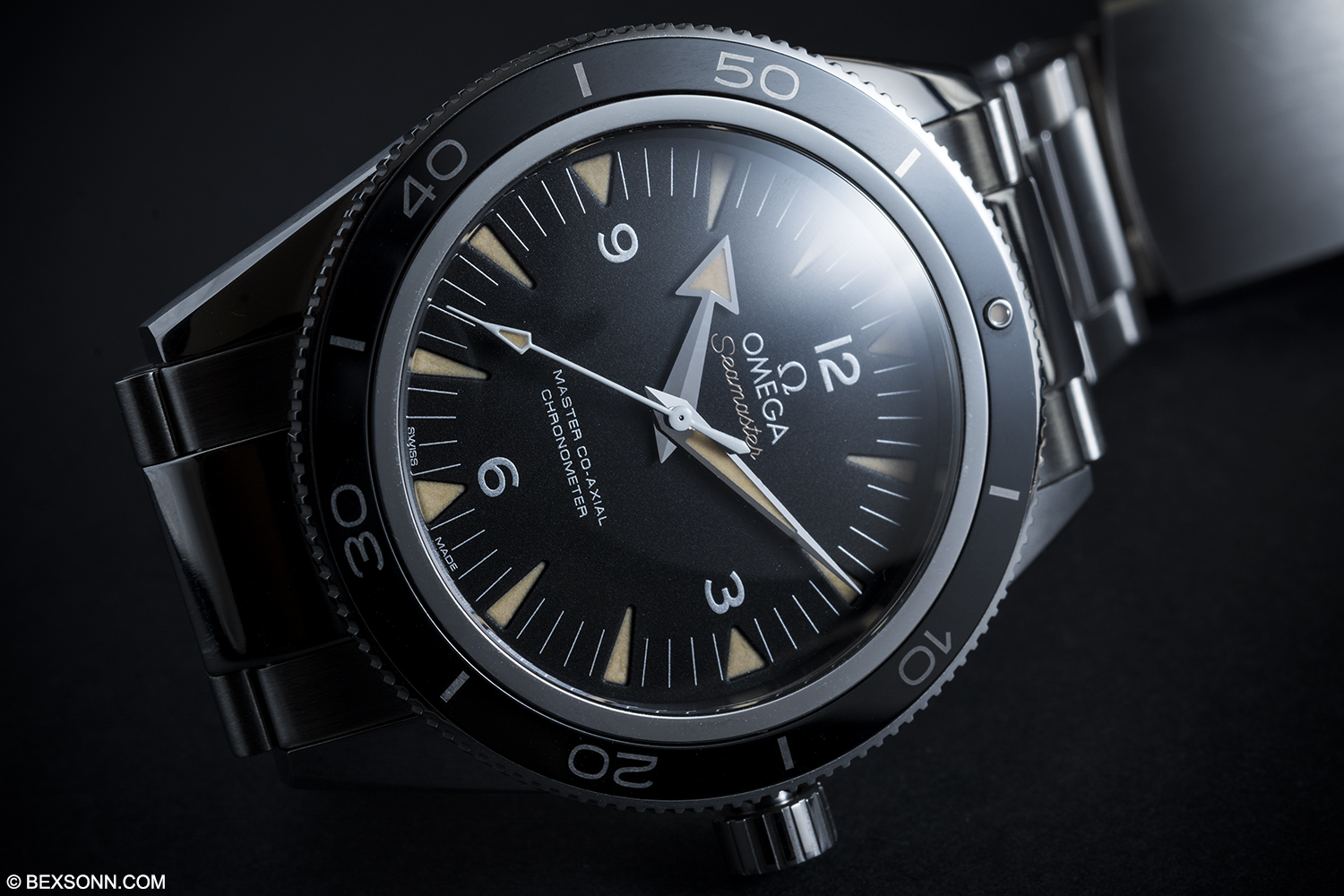 When we first got to this year’s Basel watch fair, one of the first timepieces we managed to get a look at was the hotly anticipated Omega Seamaster 300 Master Co-Axial. While Omega had posted image teasers via Facebook and Twitter, fans of the brand had quickly figured out exactly what timepiece they were teasing us with and as mentioned before this did diminish the surprise somewhat – it almost felt as if someone had told you that they were planning a surprise party for you – so you still act surprised and admittedly we still were. At the beginning of July the guys over at Omega kindly sent us a shiny new Seamaster 300 Master Co-Axial to get our mitts on for a few weeks and we were quite impressed. 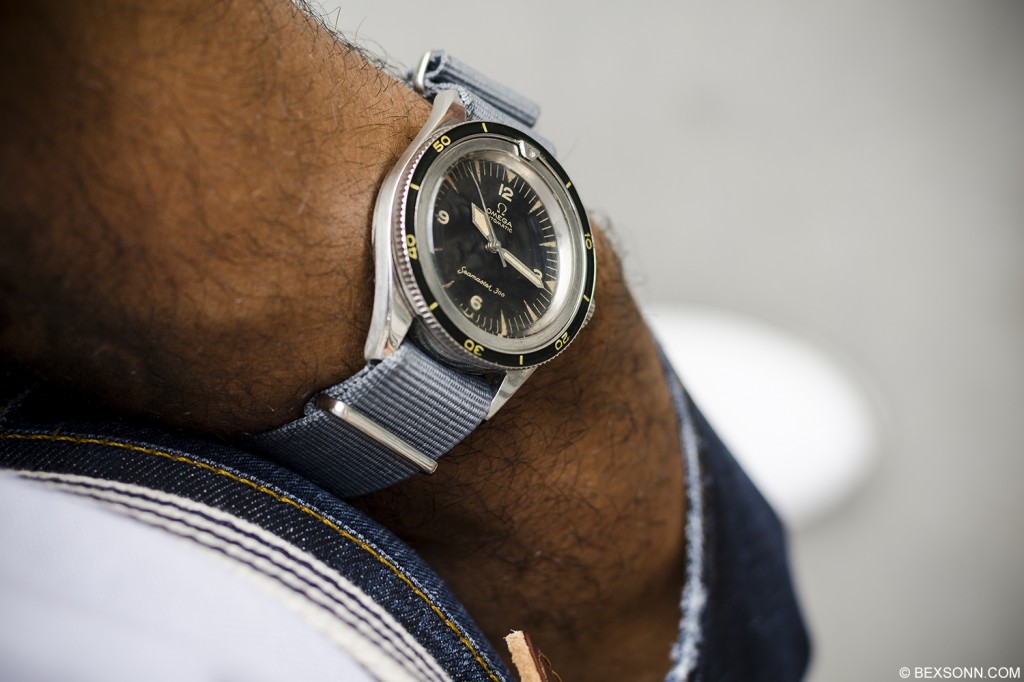 The original Seamaster 300 ref. CK2913 was introduced in 1957 along with another famous timepiece from Omega’s collection, the CK2915 (Speedmaster), the Seamaster 300 even shared the same ‘Broad Arrow’ shaped hands as the Speedmaster too. Beating away inside the Seamaster 300, was Omega’s tried and tested, hassle free, cal. 501. Known as the mother of all Omega diving watches, the Seamaster 300 was pretty much Omega’s answer to the Rolex Submariner and aesthetic similarities can be seen. However, the Seamaster 300 never really got the fame the Submariner received but among its faithful fans it was/is an absolute gem. (image above is of a CK2913 F.A.P)

In 1960 the Seamaster 300 received a new case reference of CK14755, however, this time inside was the automatic cal. 552 but the Seamaster retained its initial looks. In 1962 the CK14755 was replaced by the ref. 165.014 ST, which also introduced Omega’s new reference syntax, though this time round the ‘Broad Arrow’ hands had been replaced with straight hands, which kind of took away some of the initial impact of the Seamaster 300. In 1964 the Seamaster ref. 165.024 ST was introduced and though it still sported the cal. 552, this was the point that the Seamaster would pretty much change forever, as the case had grown in size and now sported the twisted lug design, new dial and sword shaped hands – that was until now…. 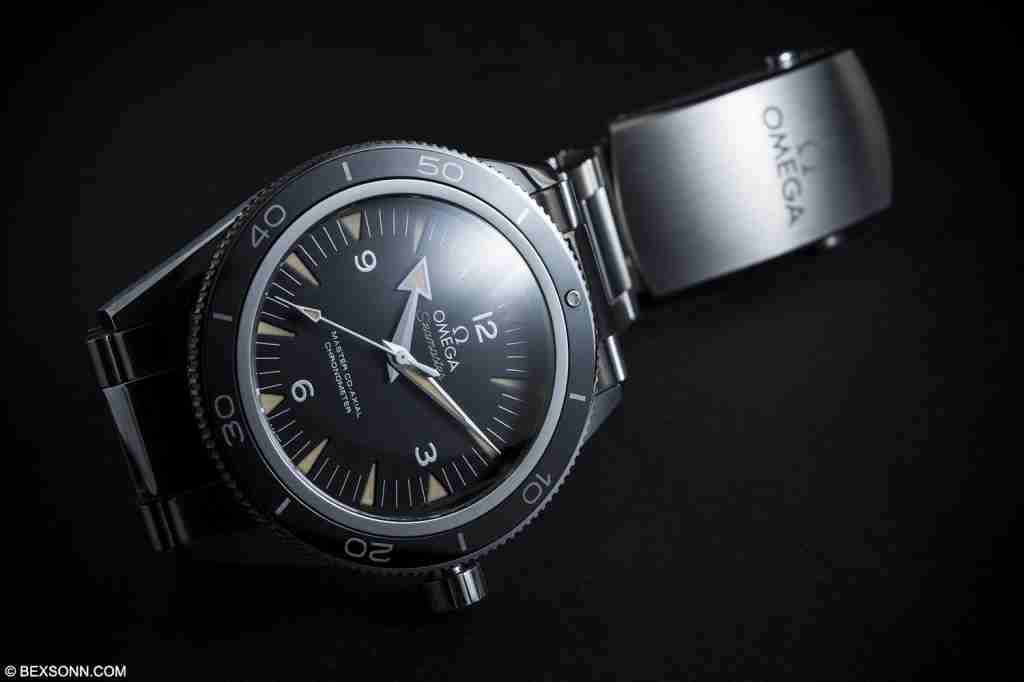 As mentioned in our previous article on the Seamaster 300 Master Co-Axial here. It is based on Omega’s original divers wristwatch, the Seamaster 300 CK2913 from 1957. Omega introduced this awesome new take on a vintage model with some vintage aesthetics thrown in there for good measure, which will please some and I’m sure will annoy others. While the case has been designed to look the same, it is not quite identical and it has also been upped in size to 41mm, to comply with modern larger watch demands.

When first released there were a few questions about the use of “Master Co-Axial” on the dial. The Master Co-Axial as mentioned before is an evolution of the Co-Axial movement, invented by the great late George Daniels, introduced in 2007. In 2013 Omega introduced the > 15’000 gauss movement in the Seamaster Aqua Terra – the Master Co-Axial is a combination of this movement and the original Co-Axial which Omega have introduced in 69 new timepieces with 8 different calibers that will feature this anti-magnetic movement. These aforementioned developments, not only makes the movement anti-magnetic but Omega also boasts that it is even more accurate than its predecessors. 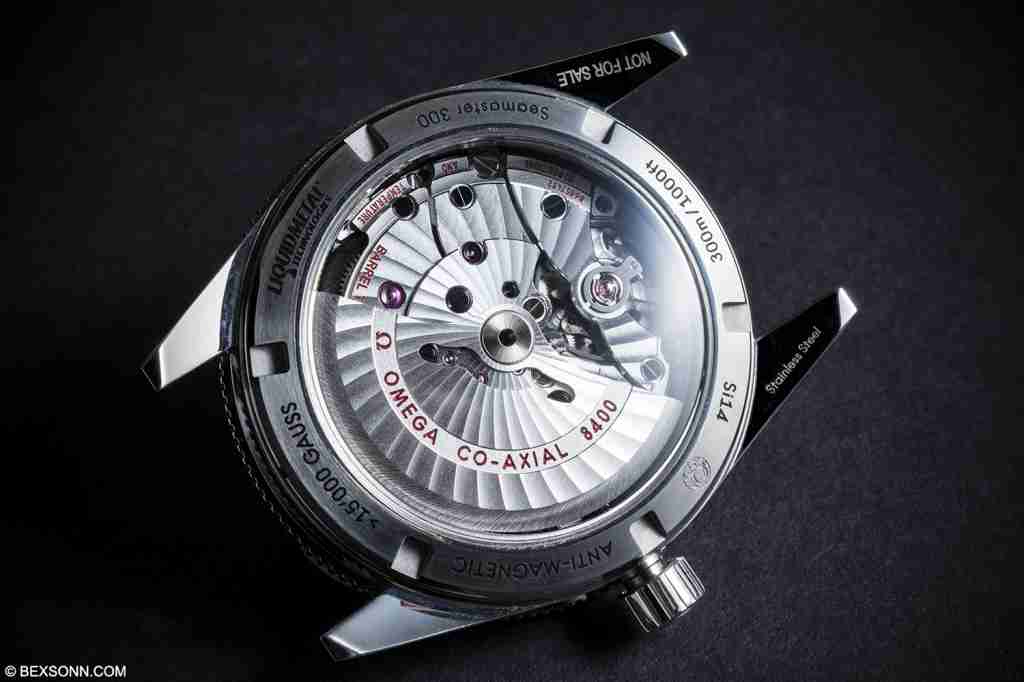 Inside the Seamaster 300 is the calibre 8400 movement that can be seen through the sapphire crystal case back, though this may seem a bit of a novelty (there is also a movement which features a red-gold rotor, that is the 8401 caliber). This is one of the new 8 calibers that Omega will use from now on (you can see one here inside the new De Ville Trésor) and as you can see from the images on the case back it bears the engraving “Si14”, “ANTI-MAGNETIC”, > 15’000 GAUSS. The self-winding calibre 8400 utilises a free sprung-balance with silicon balance spring, with two barrels mounted in series providing a power reserve of up to 60 hours. The bridges and oscillating weight have been decorated with exclusive Geneva waves in arabesque.

In recent years we’ve seen the introduction of what many refer to as ‘faux patina’ and admittedly sometimes it works and sometimes it doesn’t but that said many people often just don’t like it. This vintage patina is referred to by Omega as “vintage” Super-LumiNova and in my opinion works very well with the vintage aesthetics of this SM300. The luminous markers, like those that can be found on some Panerai’s, are actually sandwiched between the dial, which does actually give the effect that they are in fact raised but it is all part of the illusion. 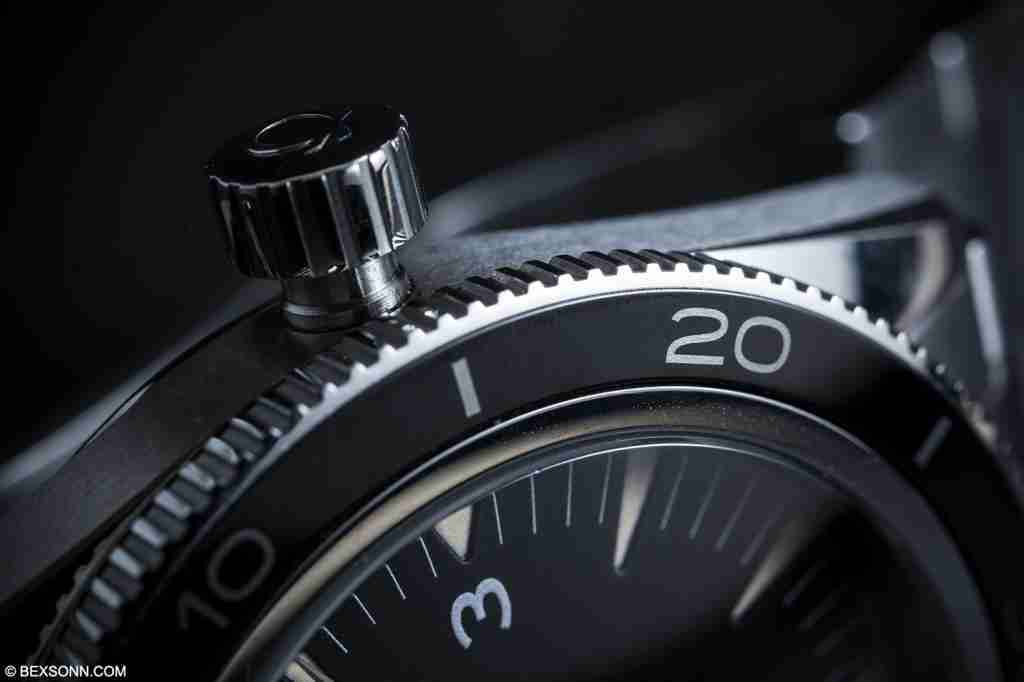 The new Seamaster 300 Co-Axial features a beautiful, sand blasted finished ceramic dial that further aids this timepieces vintage matte look. Just like the CK2913, absent from the dial is a date window and the classic makers and numerals are present at 3, 6, 9 and 12. Though the only thing that may slightly detract from the vintage appeal is the bright white seconds hand but the use of ‘Broad Arrow’ hands completes the look. The dial, for me, is very consistent and in keeping with original SM300 CK2913. 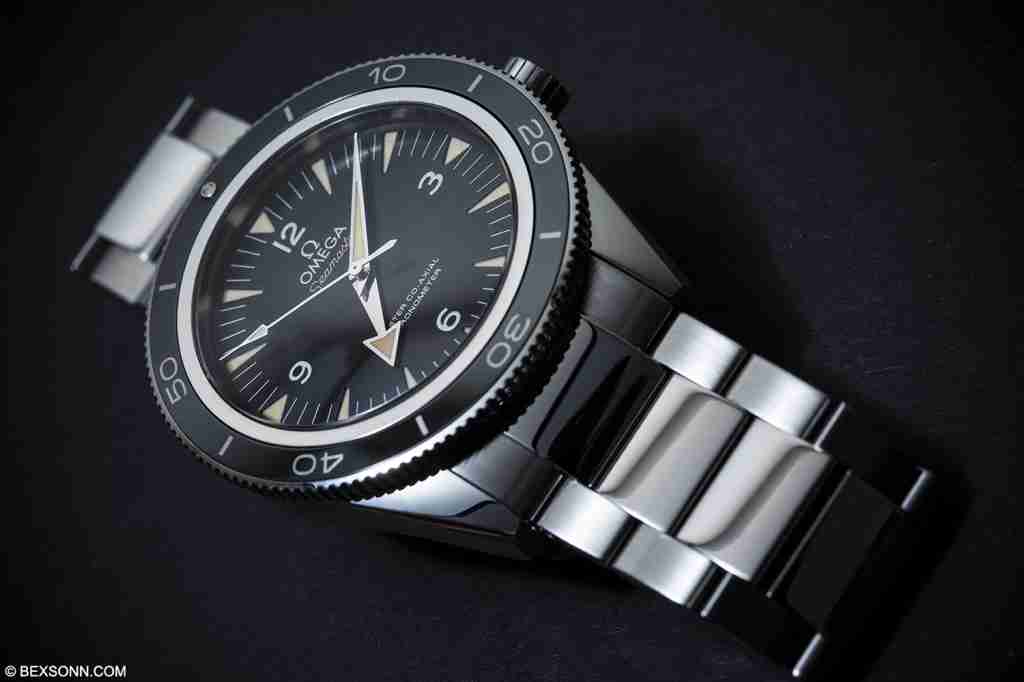 The Seamaster 300 Master Co-Axial we managed to get our hands on was the stainless steel version, though there are other variations of titanium, gold, platinum and various bi-metal combinations of: steel/gold, titanium/gold, you can’t beat a bit stainless steel. The Seamaster 300 features a 41mm case with a unidirectional, polished black, ceramic bezel ring with Omega’s patented Liquidmetal diving scale. The symmetrical case (for me) is just on the right side of perfect at 41mm though on the wrist it does wear a little bigger. 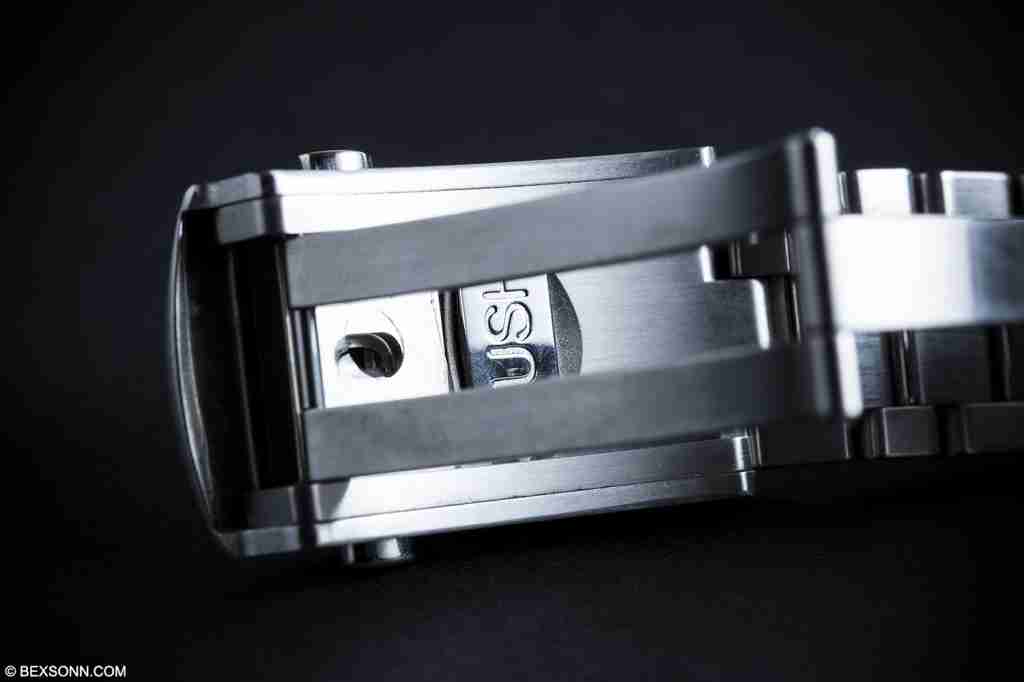 It features polished lugs with brushed sides that are also in keeping with its 1957 historical predecessor. Covering the dial is domed, scratch-resistant sapphire crystal with anti-reflective treatment inside. Being the SM300, it is naturally water-resistant to 300 metres. The bracelet sports the same classic styling as the case with brushed outer links and polished centre links, with Omega’s patented rack-and-pusher clasp. Omega have managed to produce an easy-to-use resizable, patented rack-and-pusher clasp with 6 different positions. You will only need to open the clasp, press the ‘push’ button and slide the inner clasp to the desired fit. 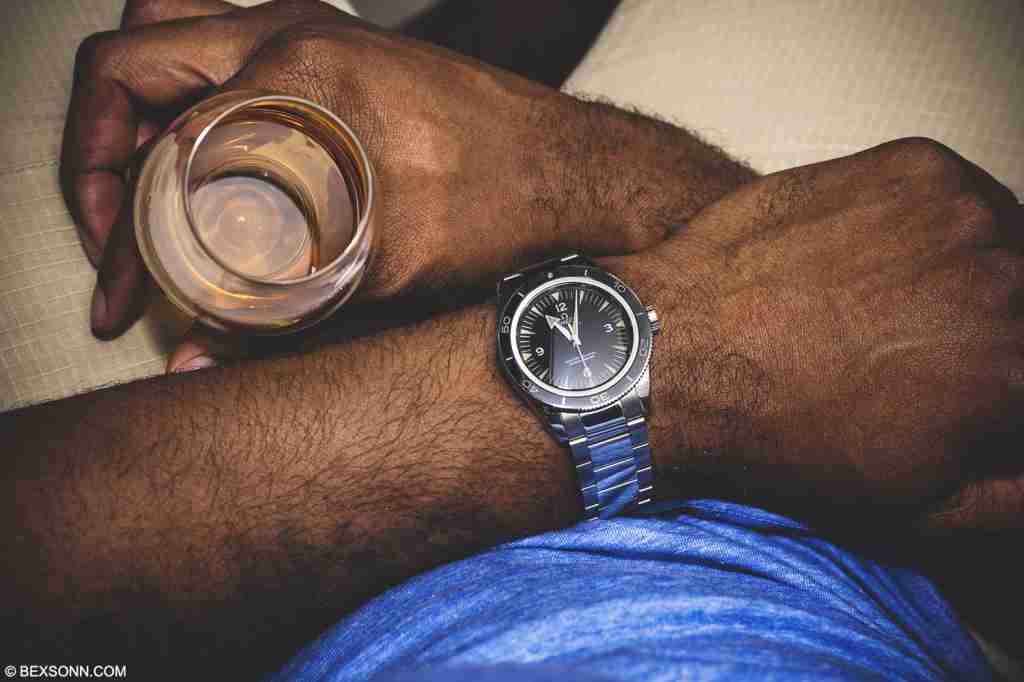 When we initially saw the new Seamaster 300 during Basel world this year, we were very impressed and perhaps couldn’t wait to get our hands on one for an extensive review. After wearing the opted stainless steel version for a good couple of weeks, while we were impressed – we were also a little disappointed too. You see, the new SM 300 is around 80% highly polished and if you are anything like me you’d know this type of finish is easily marked with smudges and very, very fine scratches – so I constantly found myself polishing it. As mentioned the case measures a respectable 41mm and comes on a bracelet too, however, this does add a bit of heft to the watch. I wouldn’t say it was uncomfortable heft but I did find when the watch wasn’t precisely fitted to my wrist it felt a lot heavier. Though we also fitted it with a NATO strap, we also agreed it didn’t look quite right. 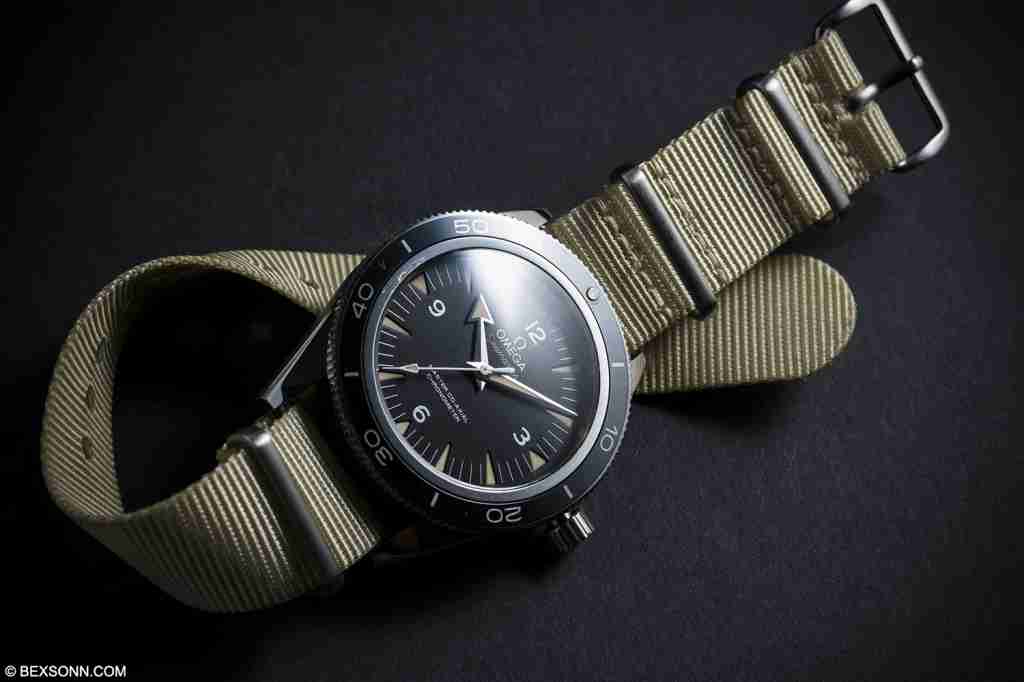 The only other thing that marginally irked me was the bezel and while this may sound trivial (which it is), the fact it uses Omega’s patented Liquidmetal causes a couple of issues. When at an angle or in direct sunlight the bezel transforms into a mirror where the numbers can no longer be seen, however, whether this will be an issue under water I can’t confirm. Make no mistake this is an absolutely stunning timepiece from Omega that has somewhat recaptured the original CK2913.  Would I buy one, for sure but I’d rather have an original CK2913, there is something just that more rugged but yet delicate about it at the same time. That said, the price you’d pay for an original is at least three times more than this new Seamaster 300 Master Co-Axial in stainless steel and that, I’m sure, is a price many could live with.

The new Seamaster 300 comes in 6 different versions as mentioned before. Stainless steel, titanium and various bi-metal combinations: steel/gold, titanium/gold and it is also available in gold and platinum (limited to 357 pieces) – with the added option of blue or black dial. The stainless steel version with black dial and bezel, that we managed to get our hands on, has a £4,170 price tag, which in my opinion is very much worth it when compared to diving watches of the same ilk. 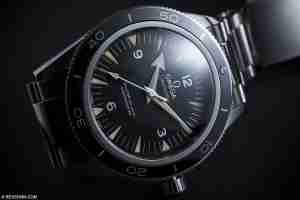 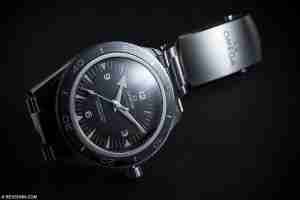 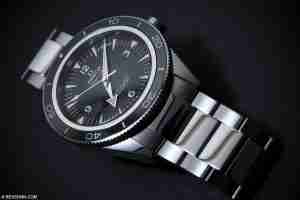 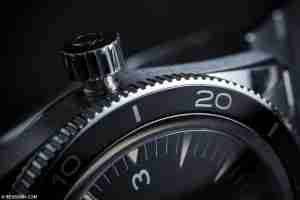 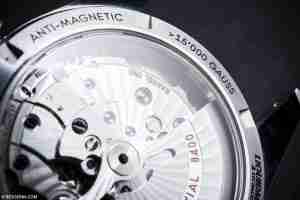 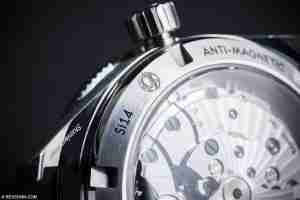 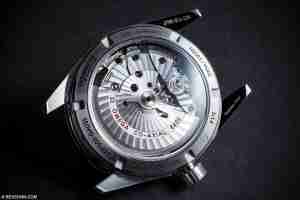 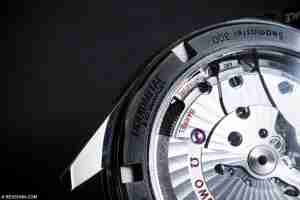 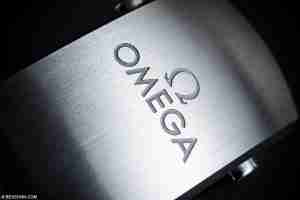 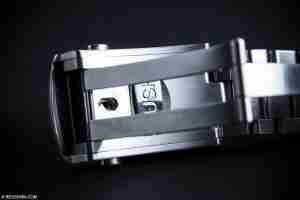 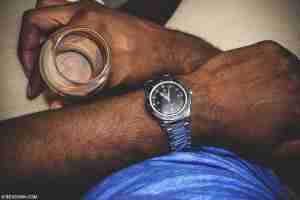