Seven Notable Lots From the Watches of Knightsbridge June Auction 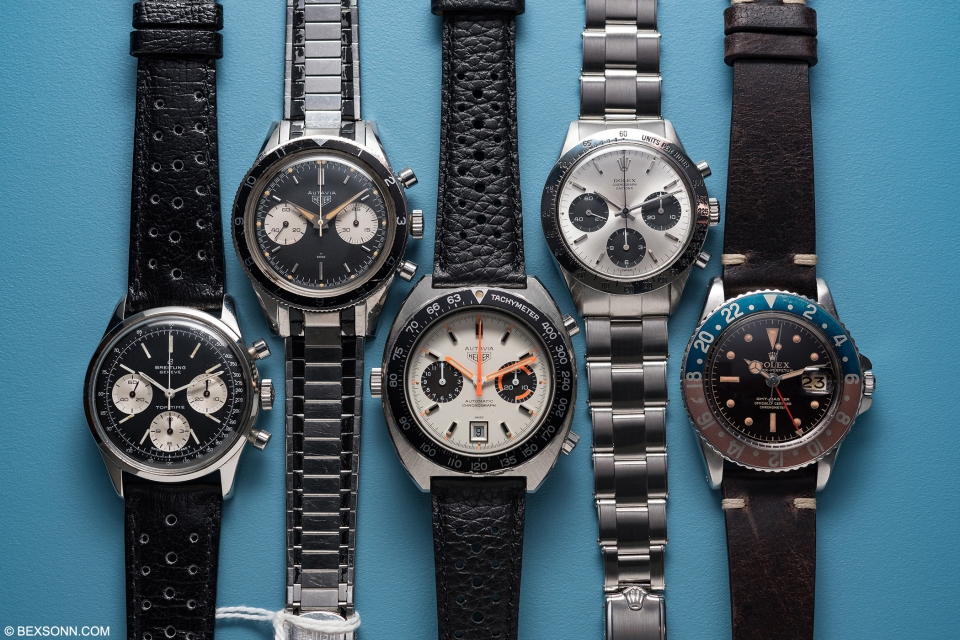 This weekend marks Watches of Knightsbridge’s second London auction of the year and third overall, when including their Dubai auction way back in January – okay it wasn’t that long ago but time does pass quickly. It perhaps goes without saying that we would inevitably highlight some of our favourite lots. That said, and I believe I’m not alone in saying this, flicking through the pages of the auction catalogue, I truly believe this is arguably one of their finest catalogues to date. There really are some unbelievable stunners in there but of course we picked just a handful to give you a taste of what is to come this weekend. We’ve been covering the Watches of Knightsbridge auctions for many years but, as mentioned, I really think they’ve outdone themselves this time. 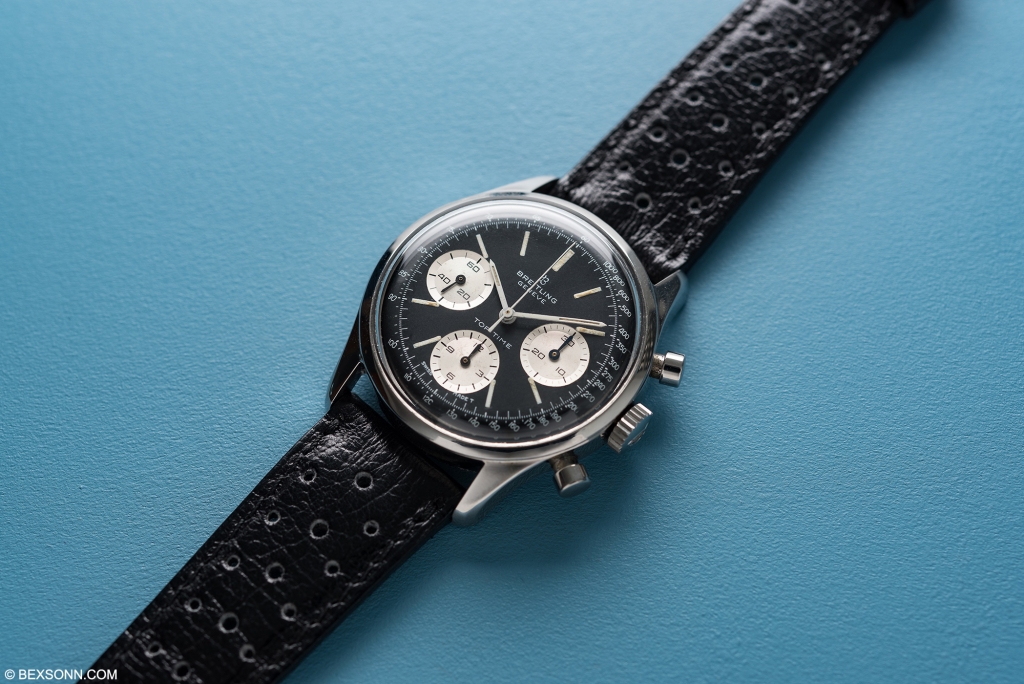 Lot 60: There’s no denying that right now the Heuer chronographs receive the major share of plaudits and collector desirability but if there is one watch brand that could perhaps rival Heuer in the desirability department, it would have to be Breitling. A brand, that of late, have come to the fore in terms of collectible vintage chronographs. Breitling’s are often largely ignored by collectors for some reason, however, I believe the Breitling Top Time 810 not only offers great value for money but it’s simple, clean, and sporty design is a great combination. 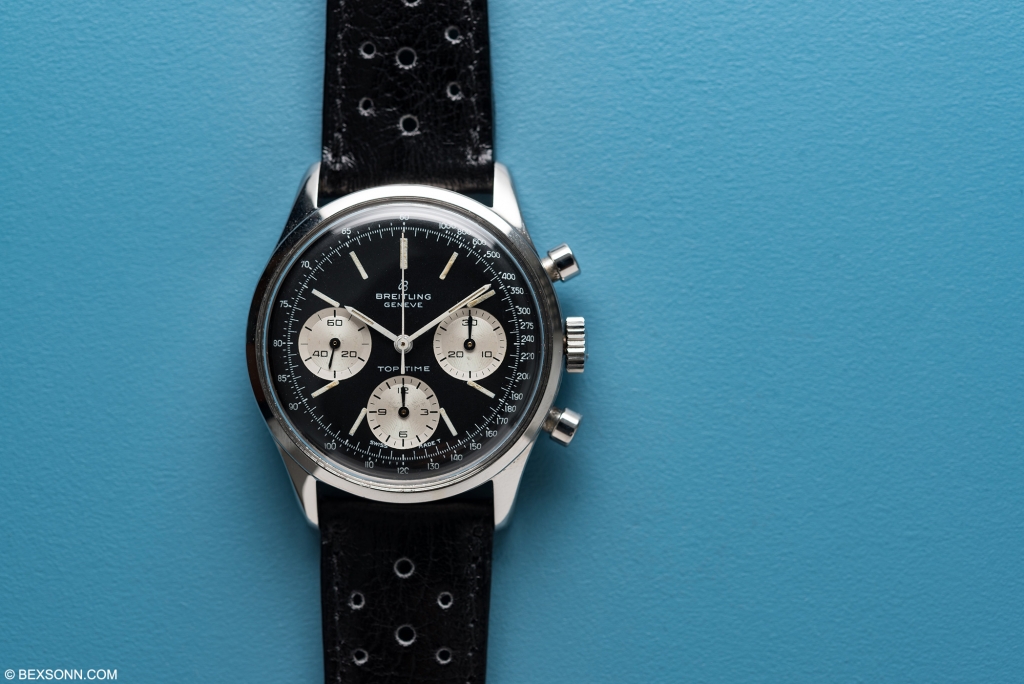 We highlighted an 810 from their last auction but as mentioned that example featured the less desirable Mk2 case. This Mk1 with ‘monocoque’ EPSA case is just perfect and the way the lugs greet the 38mm case, adds to the overall effect and allure. It sports a matte black ‘reverse panda’ dial, with three white registers, baton markers and period correct hands. Beating away inside this Top Time is Breitling’s preferred chronograph movement, which is a true workhorse: the Venus 178, that of course was used in the Navitimers and Cosmonautes. This particular example is up for auction at an estimated £3,500 – £4,500, which is in-keeping with today’s market prices but also indicates vintage Breitling’s are still on the rise. 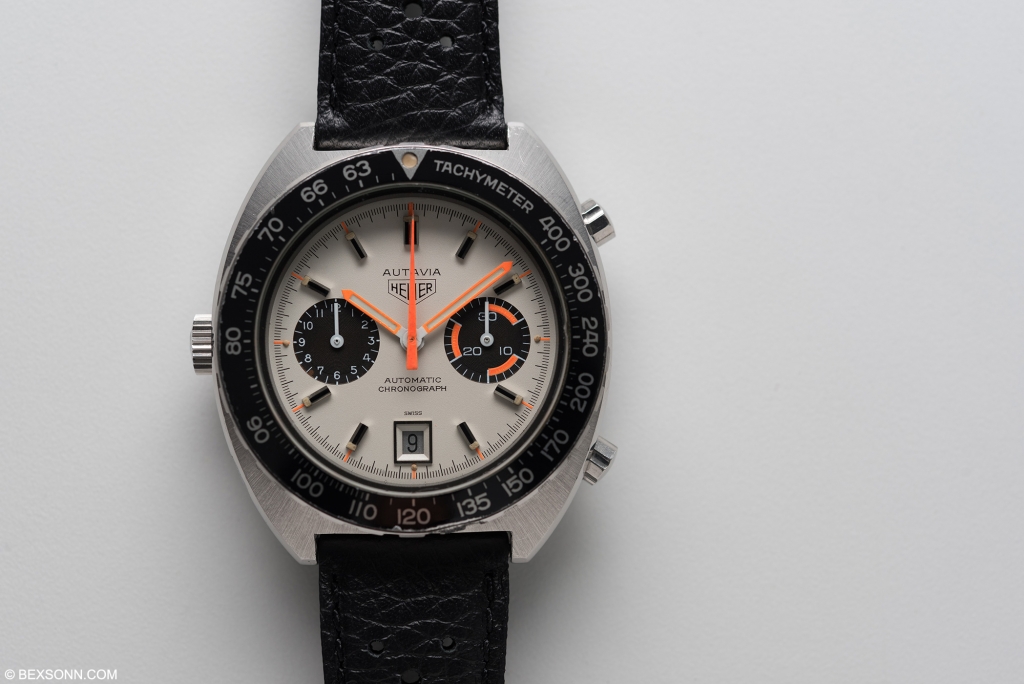 Lot 137: It is of course not uncommon for us to highlight at least one or two Heuer’s when it comes to our Watches of Knightsbridge picks. However, this example is arguably a little off piste, even for us. That said, the rarity alone of this watch cannot be ignored. 70s Heuer’s exude a more kind of love or loathe attitude, let’s face it watches made during the 70s featured some questionable designs – as you may be aware, there was something of a quartz crisis going on and for some reason or another watch designs became a little more extravagant, to say the least. The Autavia, just like the Carrera, fell afoul of this too, with both not only featuring a tonneau-shape case but both now also sported an automatic movement (a development inherited from the Monaco). 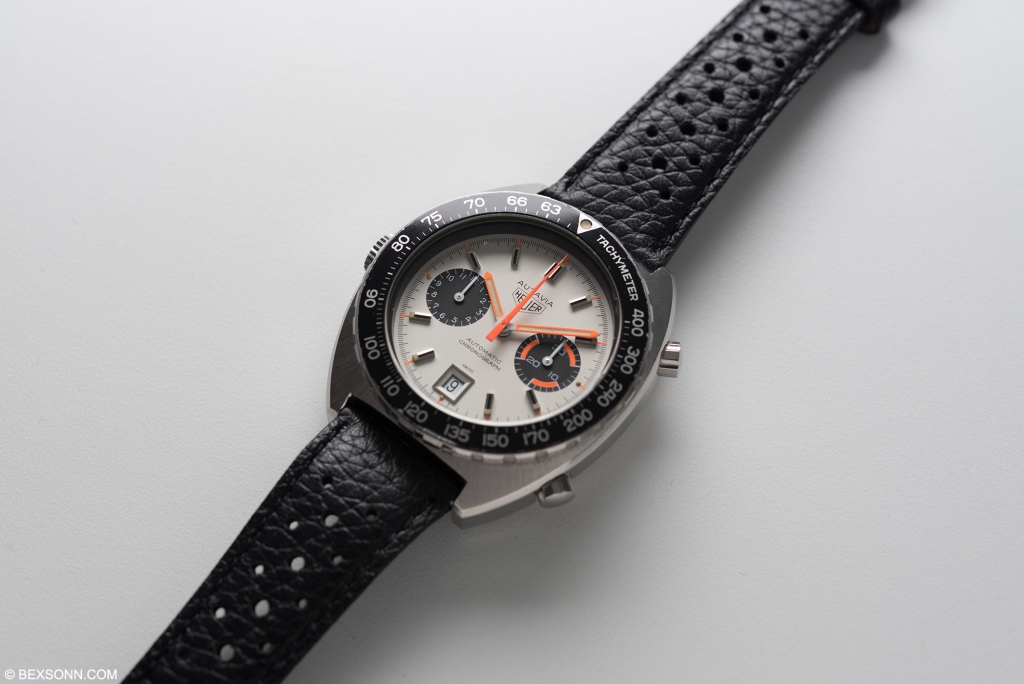 Nonetheless, the most important topic in this case (no pun intended) is that of the dial. 70s Heuer’s featured rather colourful dials, with some featuring orange hands and indices, earning them the nickname of “Orange Boy”. This very rare example cases a dial which has been named the “White Orange Boy” for very obvious reasons. That said, according to authorities on vintage Heuer’s, it is thought that only 10 examples, such as this have surfaced – making this piece very rare. But one thing must be said, while this piece is extremely rare, as you know rarity alone sometimes is not enough and you need the perfect storm to create a frenzy. Perhaps one ingredient this Autavia lacks in my opinion, in comparison to its earlier siblings, is desirability but who knows? There is no doubt this lot will perform rather well but just how well is the question? This Autavia ref. 11630 ‘White Orange Boy’ is up for auction at an estimated value of £8,000 – £12,000, so I’m sure many Heuer enthusiasts will be intrigued to see how it performs, as will we. 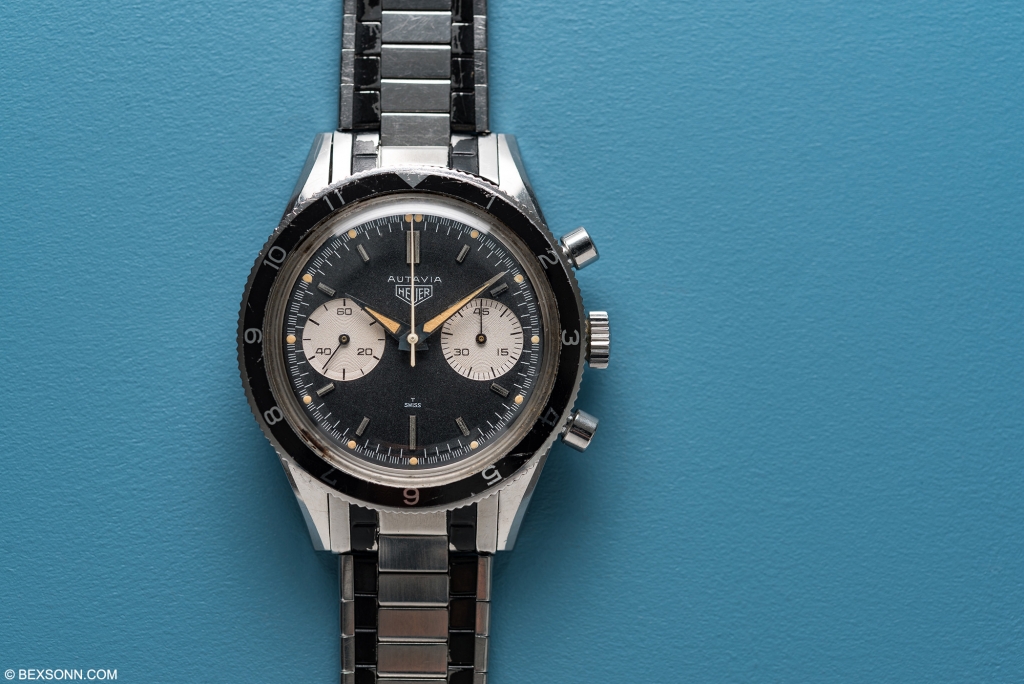 Lot 145: Another rare bird of a Heuer is this Autavia 3646, with second execution case, dial and hands. We have written quite a bit about Autavias and a little about the history of it all too, so I won’t go into the minutiae of it all again. Though what is evident is that the Autavia was certainly the line that propelled the Heuer name into the world of racing-inspired chronographs. With its highly legible dial and muscular sporty case, it is no surprise that it was the choice for the likes of Mario Andretti and Jochen Rindt. Furthermore, it was the first line of watches released by Jack Heuer when he took over in 1962 and the Autavia range has largely come to represent his successful tenure at the manufacture.

When it comes to vintage, collectors tend to value earlier iterations just that little bit more. The first and second execution cases were smaller at 39mm and the second execution dial on this is distinguished by the steel Dauphine hands and the separated minute and second markers. The earlier Autavias with two sub registers such as this one used a higher quality column wheel Valjoux 92 movement as compared to the later iterations that used a more economical workhorse Valjoux 7733. 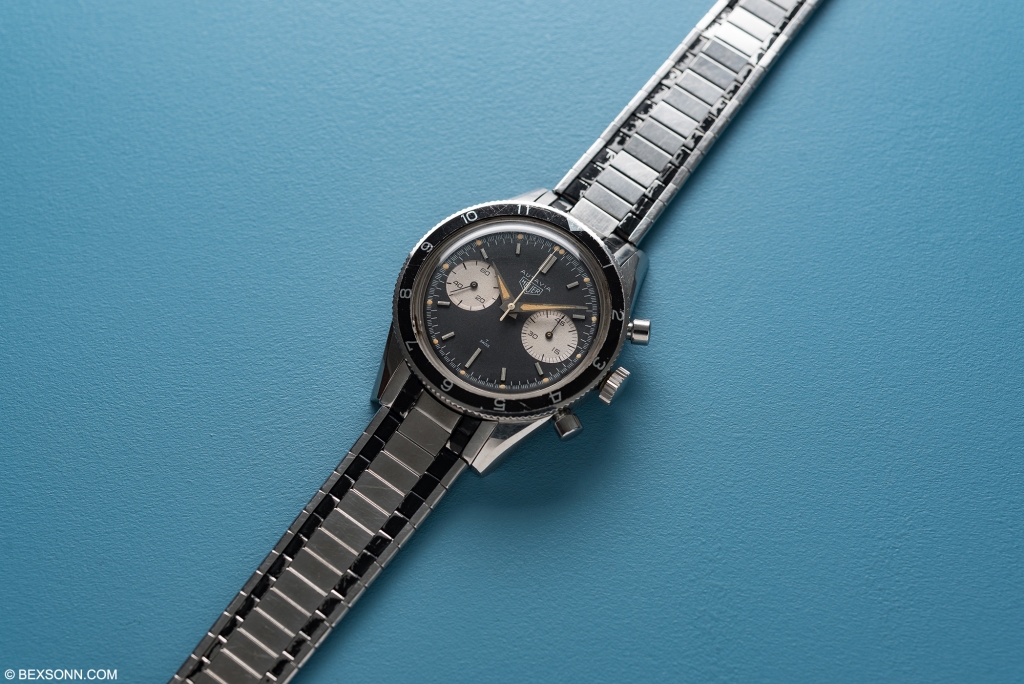 The dial of this example is in excellent condition, with thick and even lume plots and no visible tarnishing. Furthermore, the bezel is very well-preserved. There is one more detail of this watch which arguably makes it more interesting: the bracelet. It comes on a very unusual but original Heuer black enamelled “flat link” bracelet that adds more intrigue. However, condition and rarity is everything when it comes collecting vintage and this piece has just that. What is the estimate of this rare and beautiful example? Between £18,000 – £24,000. 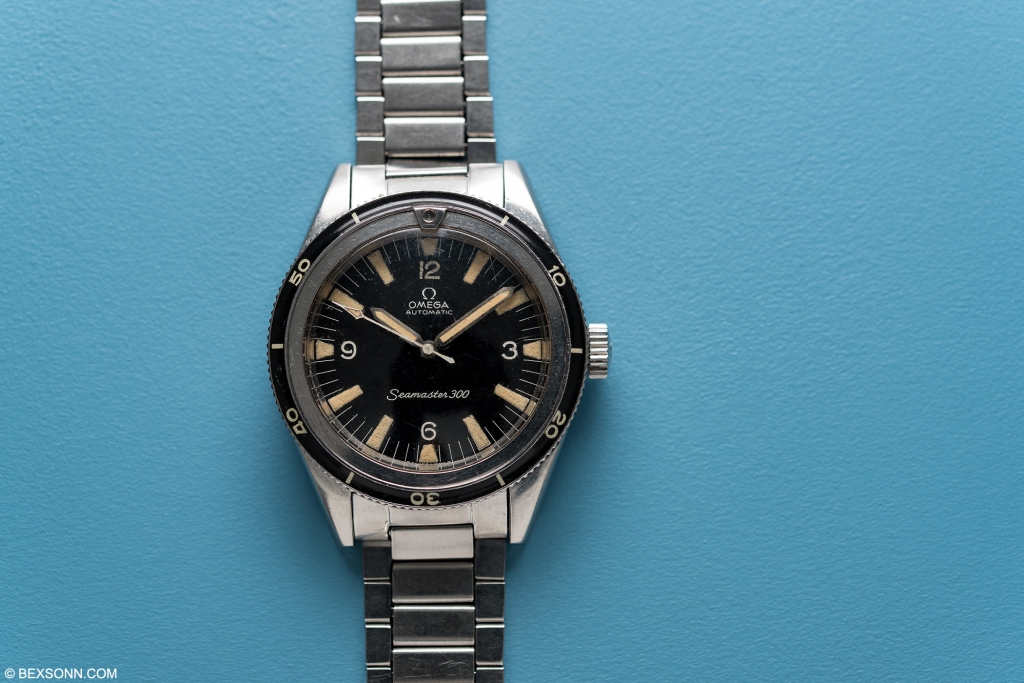 Lot 235: 2017 has seen a handful of watch brands celebrate anniversaries but one that possibly evoked more nostalgia than any other was Omega. 1957 saw Omega introduce a trio of tool watches, made especially with professionals in mind – you have to remember back then watches were made with a particular purpose in mind and not just for the bon vivant gentleman. Omega introduced the Seamaster 300 (CK2913), Railmaster (CK2914) and the Speedmaster (CK2915). Fast forward to 2017 and of course you have the 60th anniversary of all three models that we spoke about right here. That said, something interesting always seems to happen when a watch manufacturer celebrates an anniversary and re-issues models made in the past; collectors become more aware of the original pieces they were inspired by.

Finding a CK2913 is a task in itself and even when you do, be prepared to pay a hefty sum. However, this ref. 165.014-64 Seamaster 300 presents not only a very worthy alternative but also a more attainable option too. Like the CK2913 it sports the very same kind of bezel and case, with the only differences being the hands and dial. I think if you were going to compare it with like for like period changes, I’d perhaps say it is the Ed White of Seamasters and as such a very attractive one too. The estimate of the Seamaster 300 is between £8,000 – £10,000, as mentioned, making it an attractive alternative to the Ck2913. 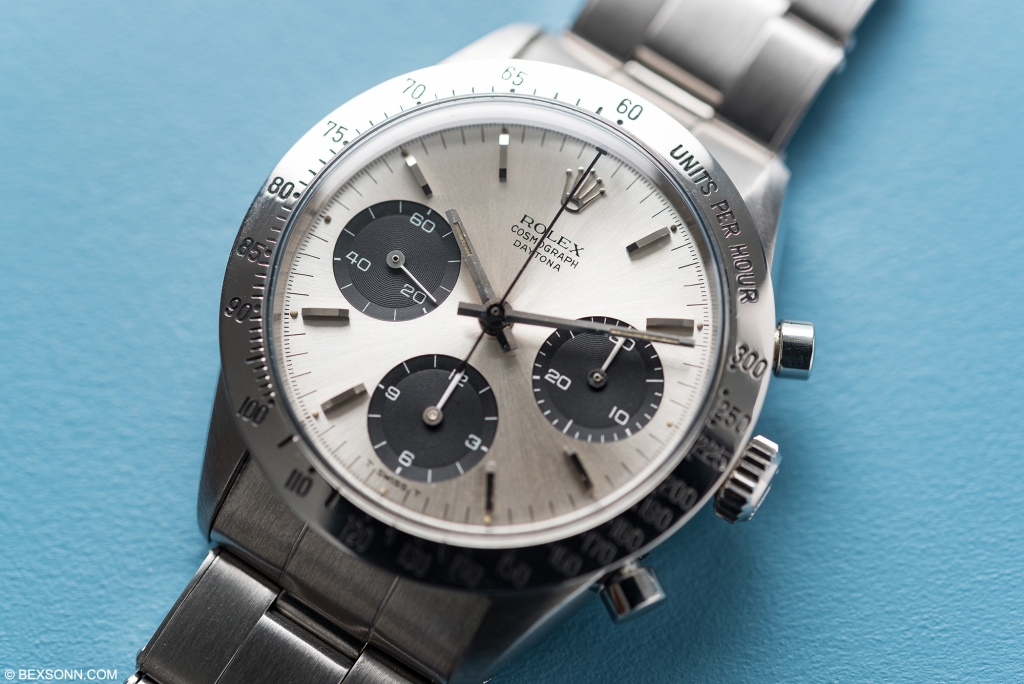 Lot 288: The reference 6239 is the first Daytona ever produced by Rolex, even though the watch had yet to be formally named as such. Introduced in 1963, the iconic chronograph timepiece for the first time featured an external tachymetre scale on its bezel. This early example features an early bezel calibrated to 300 units, while this is not the extremely rare MK1 bezel which features hash marks instead of dots, it is still quite sought-after. Moreover, this lot not only features a case that is in exceptional condition but also a dial that makes it just that little more desirable. 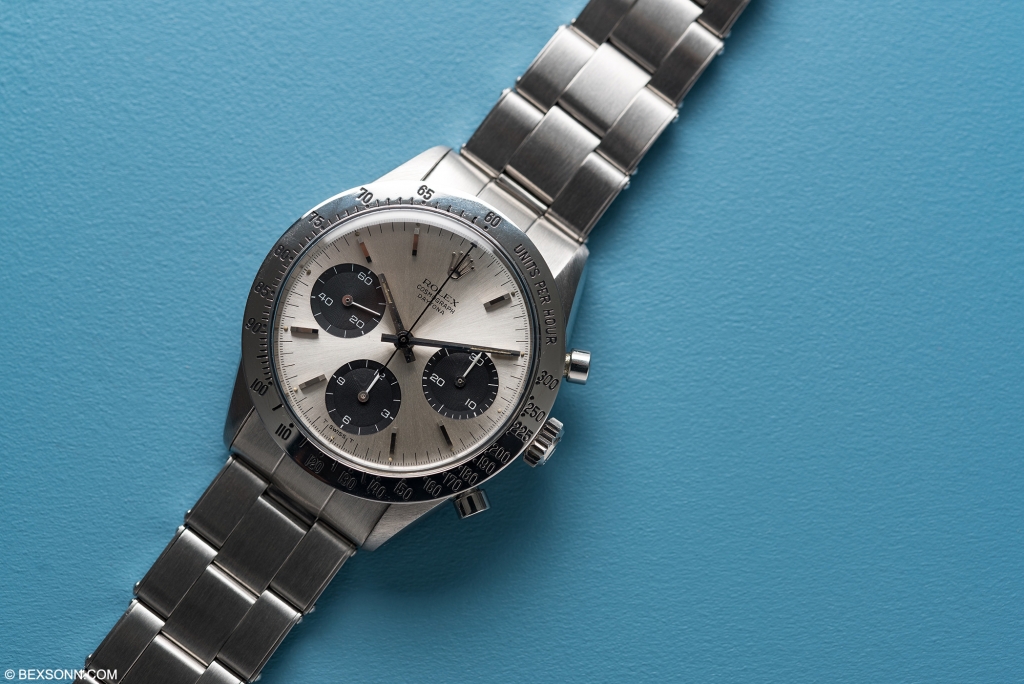 It sports a ‘small font’ Daytona dial, something only seen on early 6239s. Before 1963, Daytona’s never featured the wording ‘Daytona’ dial, this name was only given to the Cosmograph after 1964. The rarity of this ref. 6239 Daytona, coupled with its well-preserved dial and case makes it a lot that should be taken note of – these early ‘small Daytona’ 6239s in my opinion are just so beautiful. But what does one have to pay to obtain such beauty? Between £22,000 – £26,000. 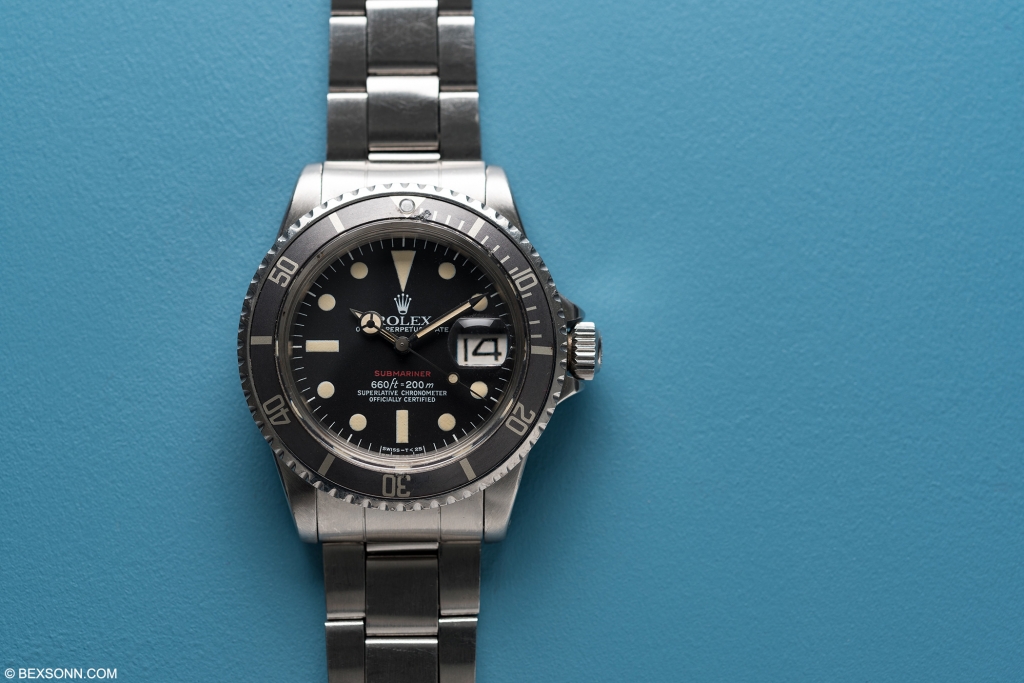 Lot 295: The Rolex Red Submariner was produced from roughly 1969 to 1973. It is entirely possible that many of you reading this may well have seen a Submariner Date but this one has a minute difference, which makes this example highly coveted: it’s the first Submariner with a date. Today it may not seem like such a big thing, considering that a large percentage of Submariner’s you see on wrists feature a date aperture. The Rolex Cyclops actually started out years back in 1953 on the Datejust (some say it was the Turn-O-Graph), however, what you need to remember is that it didn’t begin life on the Submariner Date. 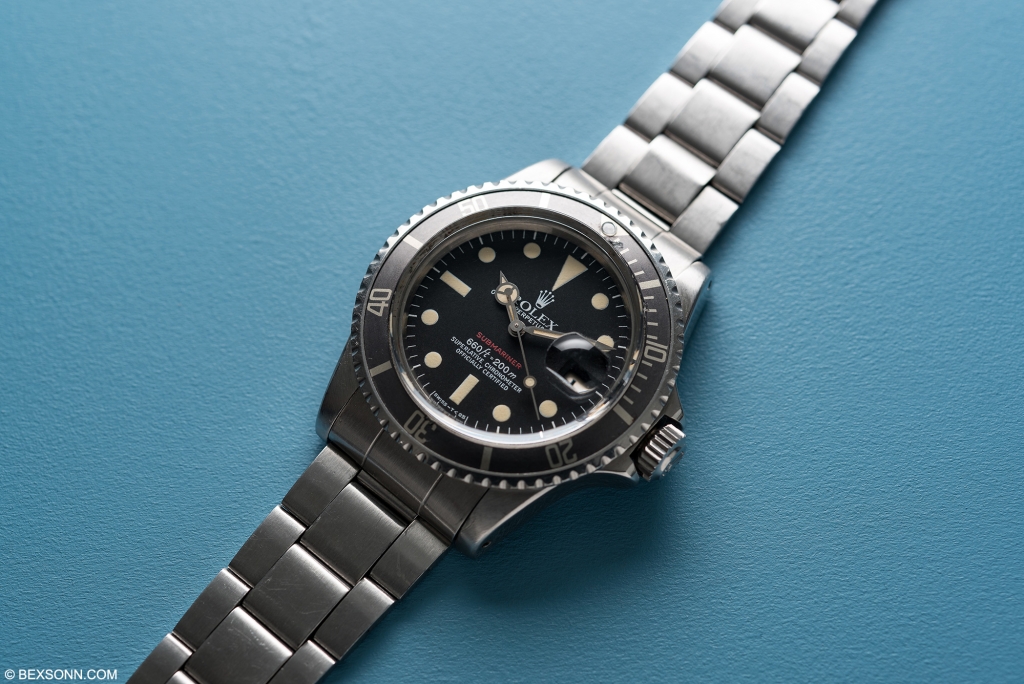 Inside this reference 1680 Rolex Red Submariner beats the 26-jewel calibre 1575 movement. The reference 1680’s 40mm stainless steel case offers wearers 200 meters of water resistance, which is more than adequate for the majority of real-world applications. Due to their limited production numbers, Rolex Red Submariners are considered quite rare, and generally sell for significantly more than their equivalents with white text. Additionally, their rarity has only increased over the years, as it was a standard practice for Rolex to replace damaged Red Submariner dials with white-text, service dials when watches were sent in for servicing. Moreover, this example is in excellent condition as well. With an estimate of £8,000 – £10,000, how will it perform? Who knows, but it does have rarity, condition and desirability on its side. 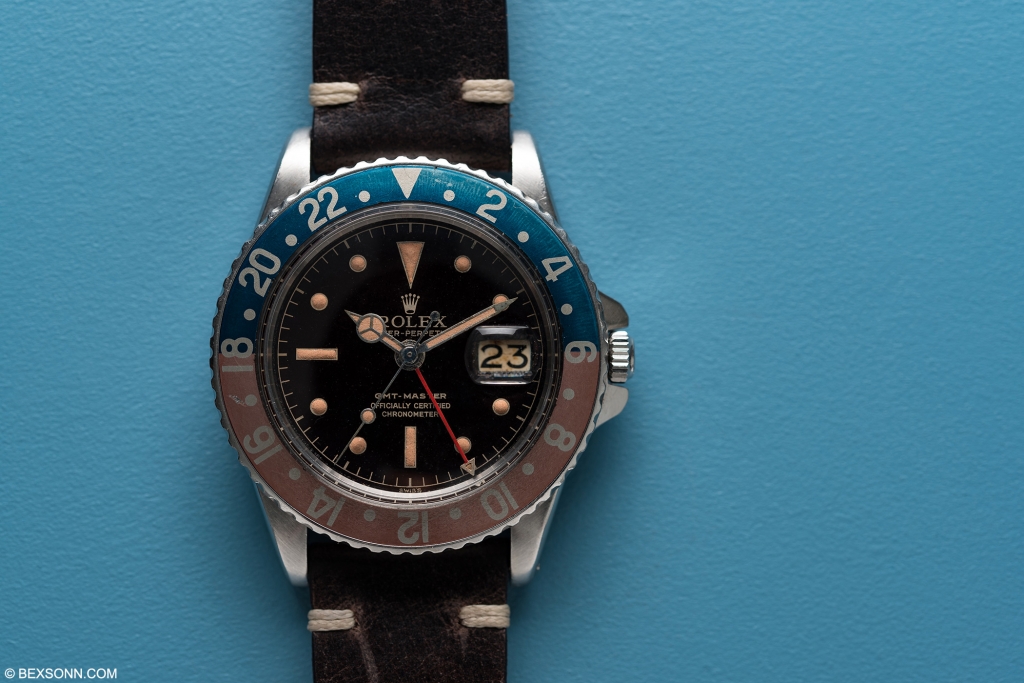 Lot 302: I’ve said it before and I’ll say it again, the Rolex GMT-Master is, arguably, more likeable than the Submariner. Why? Perhaps the actual everyday usefulness is much more appreciated and there is also the point of, when you have a GMT, you just kind of have a GMT; not to say there aren’t subtle differences between them but each one just seems to be appreciated for what it is. This rare and early GMT-Master is a beautifully aged example, featuring its original black glossy dial with chapter ring and gilt print – reading “Officially Certified Chronometer” (OCC), which was later replaced by what is more commonly seen today (COSC, or Superlative Chronometer Officially Certified). These early examples have become truly collectible in the world of vintage Rolex. 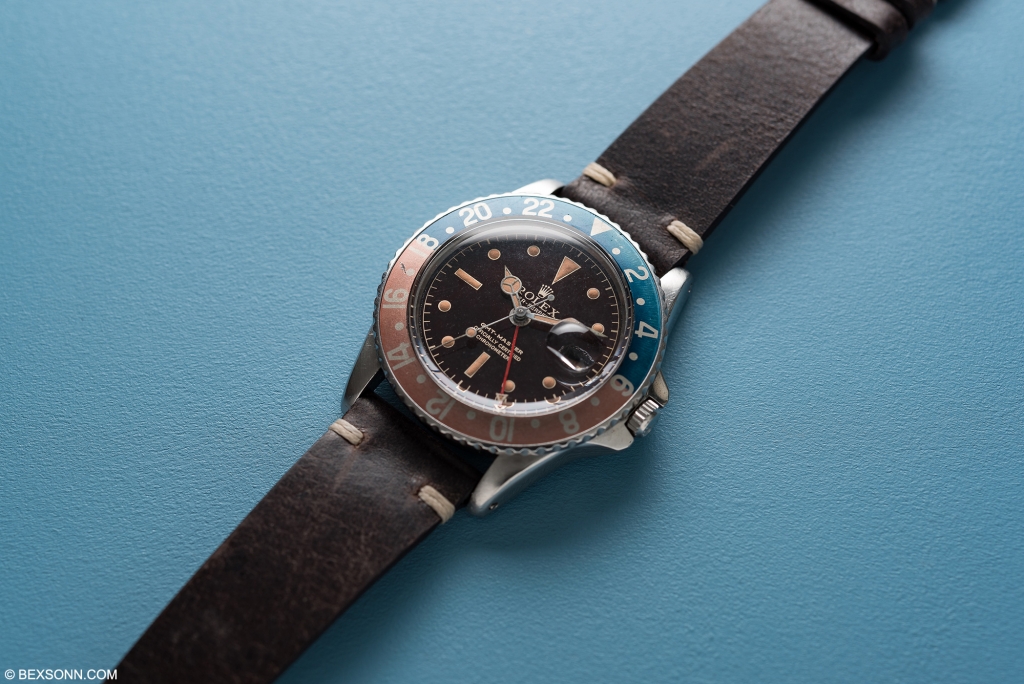 That said, perhaps the only thing age-wise that really stands out on this example is the edge around the date aperture. If you look closely, you’ll seen that the cyclops, coupled with the sun, has caused a little extra ageing – though this all adds to the originality and authenticity of the dial. Inside is the automatic calibre 1560 with “butterfly” rotor, signed Rolex S.A. The Oyster case, as it should, features pointed crown guards, with a nicely aged “fat font” Pepsi bezel. This early GMT-Master ref. 1675 OCC is up for auction at an estimated price of £10,000 – £15,000 but I wouldn’t be surprised if it went for more.

The Watches of Knightsbridge auction will taking place, this weekend, on the 24th June 2017 – make sure you visit the official website to view the full catalogue.