The Omega Railmaster: The Forgotten Master of the 1957 Trilogy 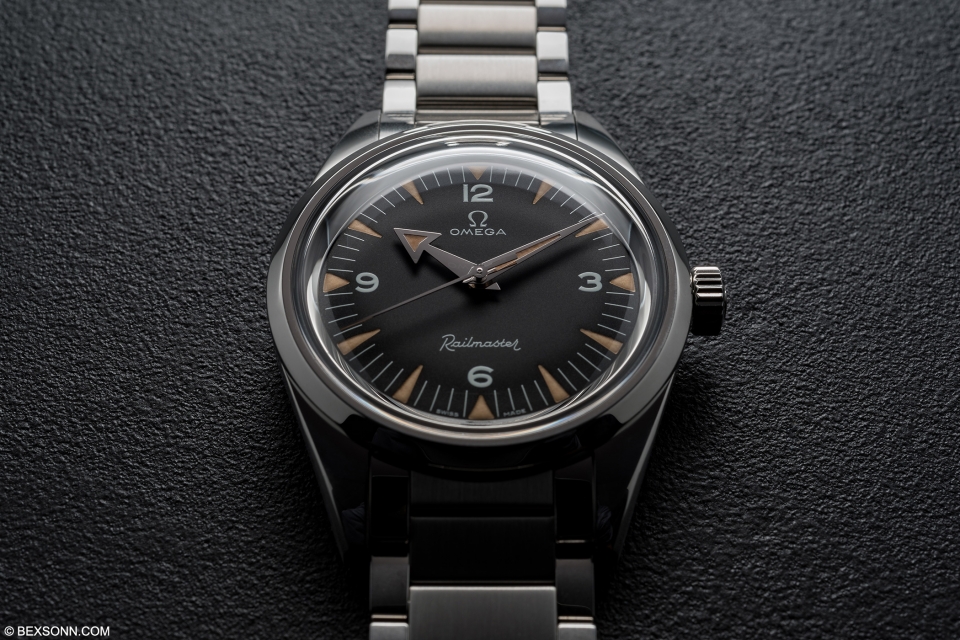 1957, the year that saw Omega release three watches that would go on to become not just famous but household classics among the watch collecting fraternity. The Seamaster 300, Railmaster and of course Speedmaster. These three watches all represented 3 various fields for use. The Seamaster, by virtue was destined for divers of the like, the Railmaster, while perhaps not as evident, was made with scientists who worked in environments of high magnetism in mind and finally the Speedmaster, which was originally made with racing drivers in-mind but we all know where that story ends up. Being the 60th anniversary since all three watches were produced, Omega saw it fit to honour this trilogy by introducing a limited edition of all three pieces at this years’ BaselWorld.

The Seamaster and Speedmaster are something of legends, even amongst those who aren’t as watch savvy as some. They are well-known pieces but the Railmaster is perhaps the least known pece among the three: it is the forgotten Master. The Railmaster was a highly anti-magnetic watch, which is incredibly rare, even more so than its famous counterparts by rival watch brands (you know, that one from the brand who wears the crown…).

Magnet fields are all around us and are/is one of the major causes of a watch to become inaccurate. Magnetism has been quite a significant issue throughout the history of watchmaking, just as gravity has, because it simply plays havoc with a watches accuracy. And if that wasn’t more, watches worn by the likes of people in the medical and scientific field become even more vulnerable. Though, in 1957 Omega released the Railmaster, which had a specially constructed case, dial, movement and dust cover using materials to shield against magnetic activity. The movement was copper finished and protected by a special double case and iron dust cover making it Omega’s first 1000 gauss anti-magnetic watch. 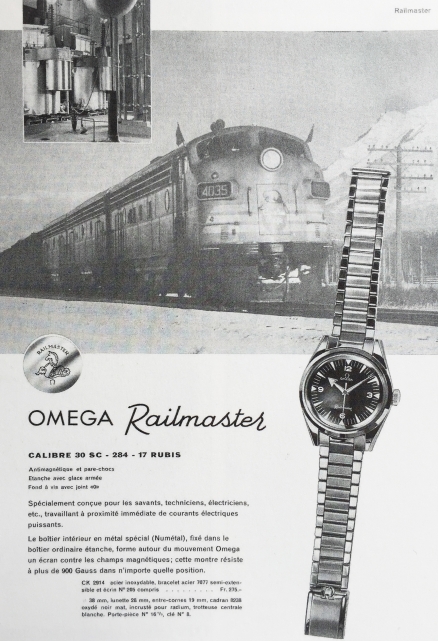 While it appeared that the Railmaster from Omega was late to the game, by 1957 the Milgauss ref. 6541 and IWC Ingenieur ref. 666 had already hit the market, they had already been testing RAF issued watches to resist magnetic fields, such as the CK2777-2 back in 1953 – it was these pieces that would form a stepping stone towards the CK2914. 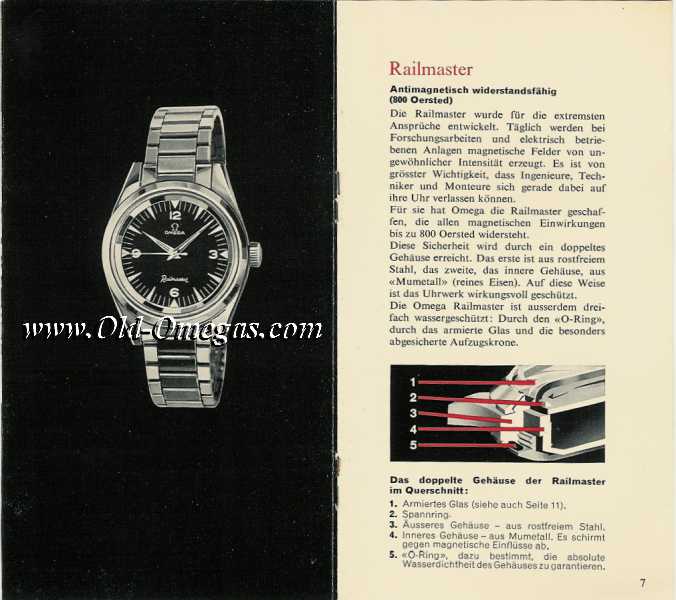 The Railmaster at the time could resist a magnetic force of up to 1000 Gauss or 0.1 Tesla, thanks to the Faraday Cage protection. By placing a MuMetal (a branded name for soft iron) plate on the case back, Omega were able to protect the movement inside from magnetic fields. Omega chose to use 30T2 base movement for the Railmaster which would be renamed the calibres 284, 285 and 286 throughout its years of use. However, one thing that maligned the Railmaster, was its relatively short production run, of course starting in 1957 but ending in 1963, something that didn’t affect its trilogy counterparts. Because of its somewhat short production run, this makes the Railmaster one of the rarest pieces of the trilogy and by virtue, one of the most collectible. 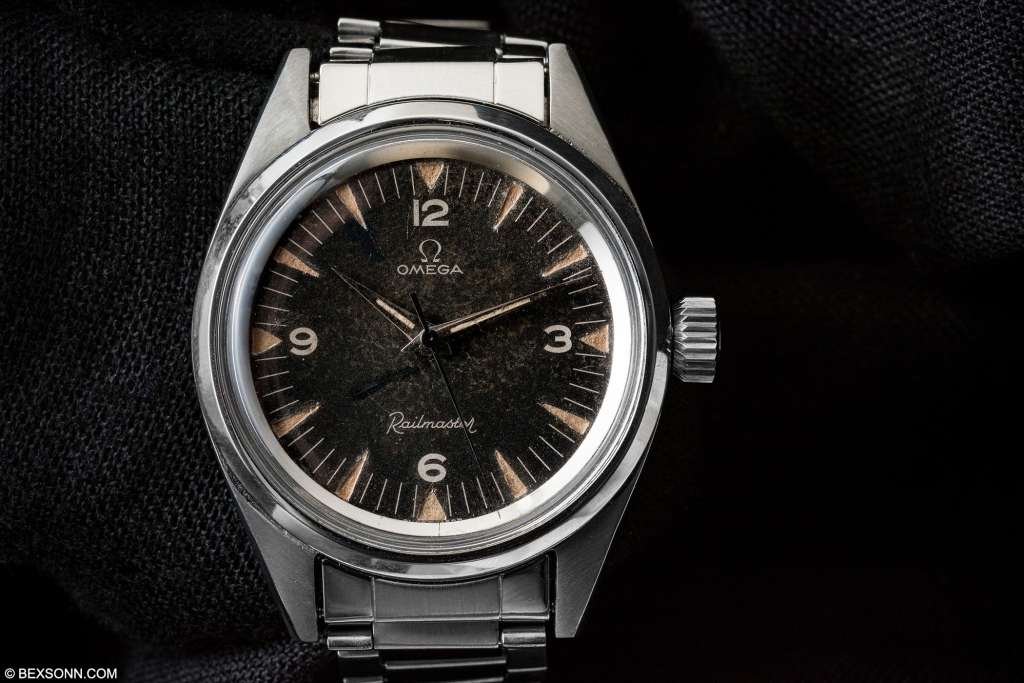 The Original Railmaster CK2914 was very similar to the Seamaster 300 at the time and both cased near identical black dials, which featured 3, 6, 9 and 12 with triangles marking each of these hours and elongated arrows marking the rest of the hour marks. Both also sported “Broad Arrow” hands but the key differentiator being the dial thickness that was just 1 mm thick as opposed to the normal 0.4 mm thick, an element of its anti-magnetism. Oh and of course the inscription of Railmaster on the dial. 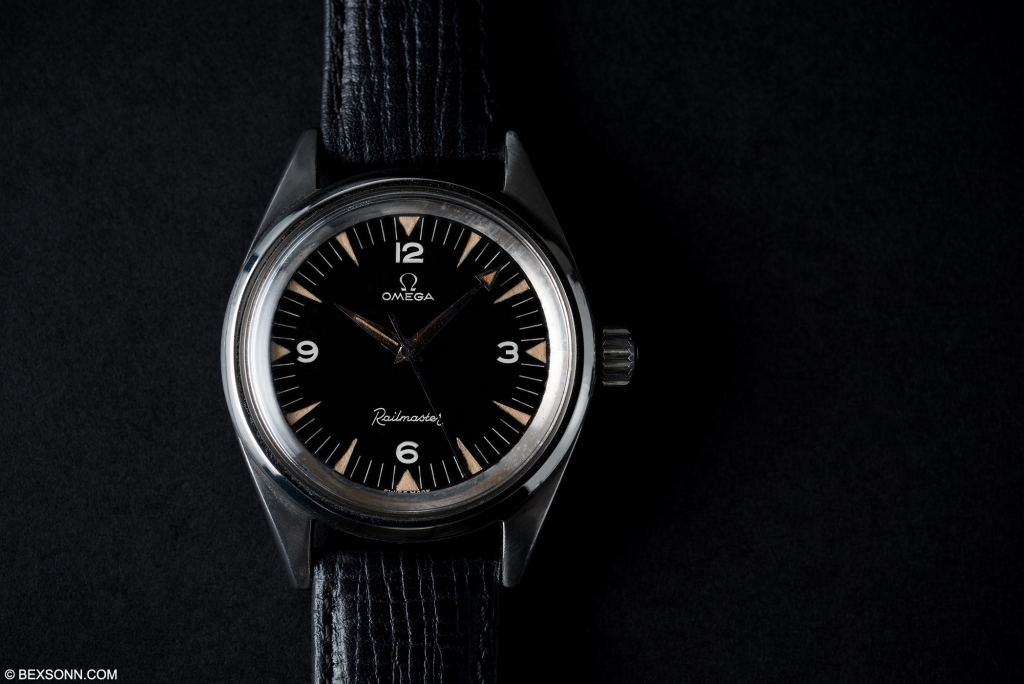 There are few variants known of the Railmaster, the original one that featured “Broad Arrow” hands, one with Dauphine hands even one with Baton hands, which co-inside with reference numbers from 2914-1 through to -6, and even 135.004 (pictured above). There were even uber-rare variants made; the elusive military versions, of which there are two. One that was produced for the Pakistani Air Force (PAF), though this actually bore the words Seamaster on the dial but still had the Railmaster case and housed the anti-magnetic cage. The other, is perhaps a little rarer and was produced for the Peruvian Air Force (FAP) and while these also featured the case and movement of a Railmaster, it bore the inscription Flightmaster on the dial.

Even though Omega introduced a new version in 2003 dubbed the Railmaster Co-Axial Chronometer and another in 2012: the Railmaster XXL Chronometer, none have quite lived up to the original made in 1957 – until now that is. This 60th Anniversary Railmaster is everything you could want and more. 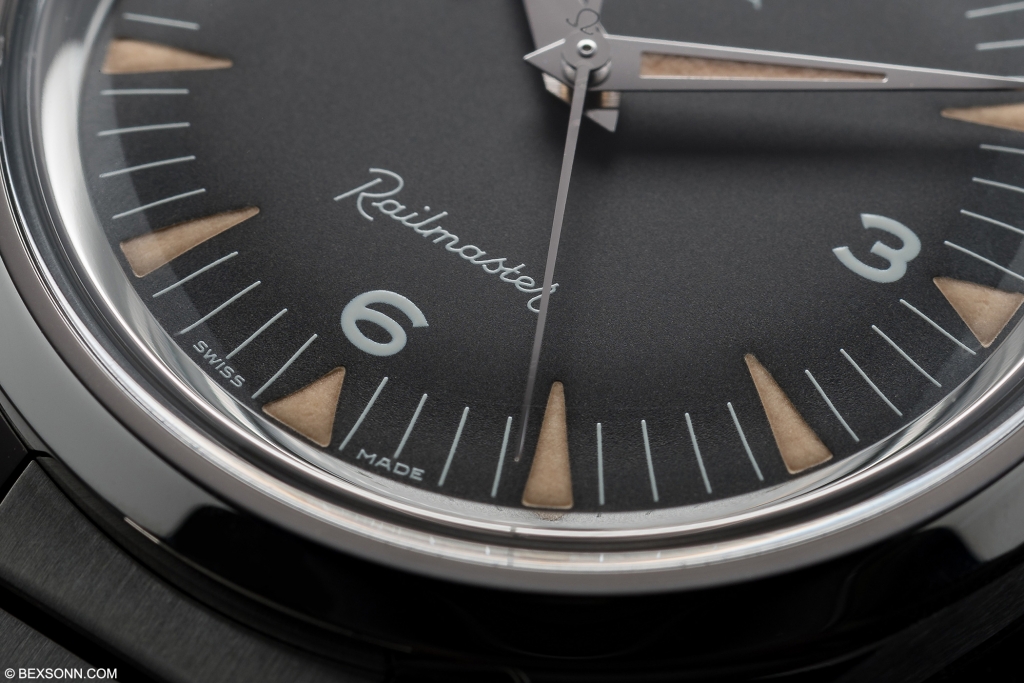 As mentioned, the original Railmaster ref. CK2914, was designed as a tool watch; it was simple yet elegant but had a particular purpose. The double-case anti-magnetic watch was specially designed for scientists, technicians or anyone who worked close to electrical fields. The original’s unpretentious style has been carried over into the 2017 model. The indices have been filled with faux vintage Super-LumiNova, which many have frowned upon, however, I think in this instance it would have looked a little strange to see white lume. 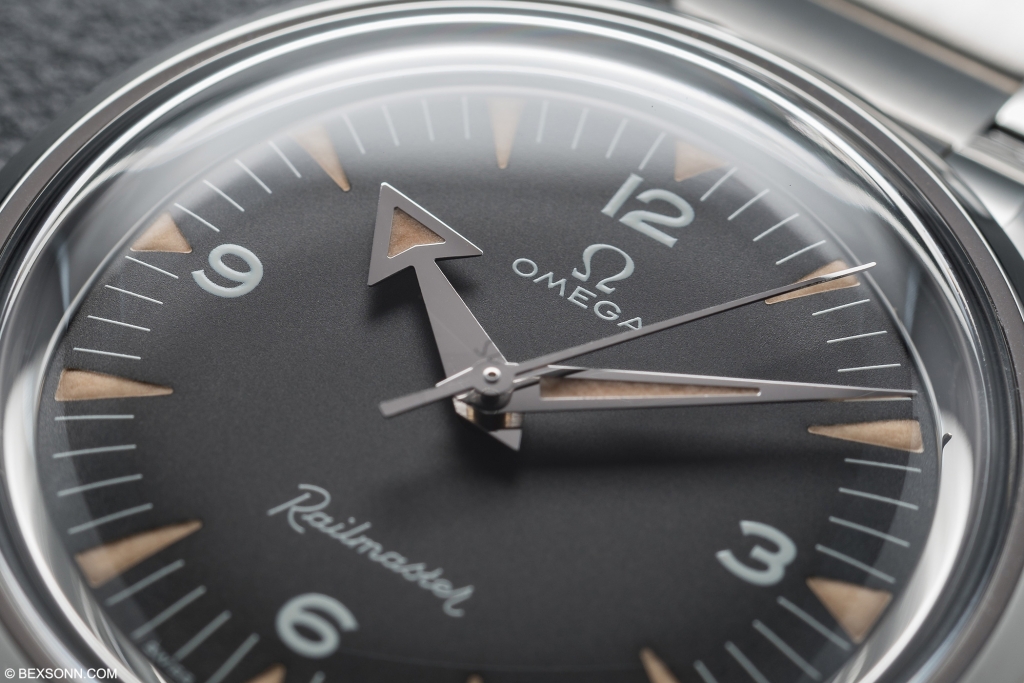 This faux vintage look is also carried over onto the “Broad Arrow” hands, which completes the vintage look, albeit induced. The dial of course sports 3, 6, 9 and 12 Arabic numerals, with triangles marking each of these hours and elongated arrows marking the rest of the hour marks. The dial features the old-style Ω, as well as text; these are the minute details collectors alike drool over (myself included) and it is this attention to detail that has made these trilogy pieces very special. 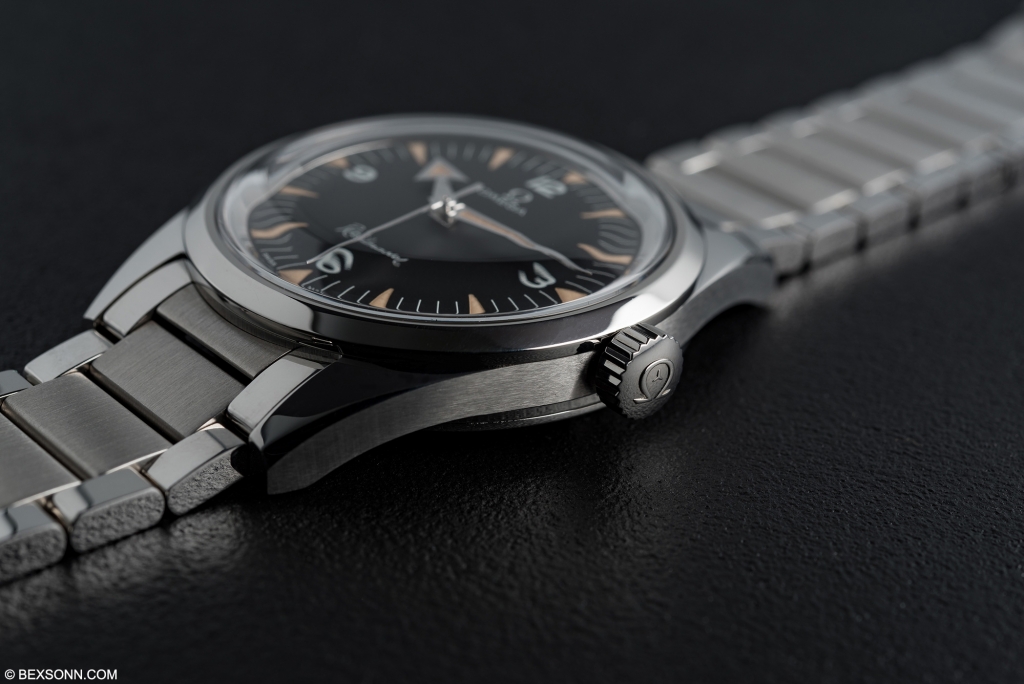 The case has been carefully and expertly reproduced. Omega used a unique digital scanning technique for the first time, which provided the Swiss watchmaker with accurate representations of all three original watches. These minute cross-sections and dimensions, along with drawings of the original models, served as design templates for the new watches, with subtle updates bringing them into the 21st, yet allowing them to remain true to the originals of 1957. All angles and facets have been polished to a mirror shine, with only the case sides being satin brushed. 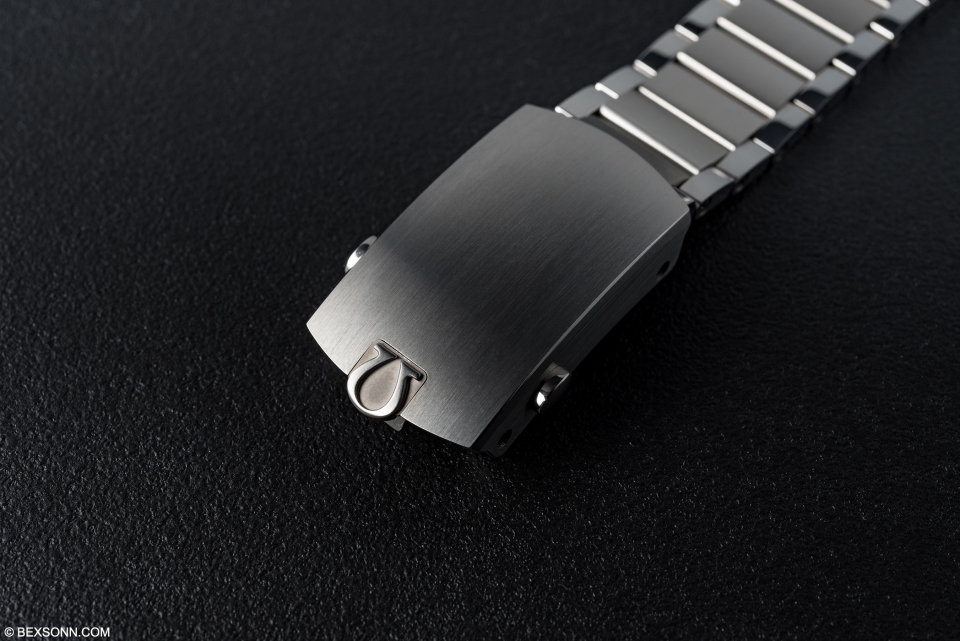 The steel bracelet has of course been updated but has been done so tastefully, with brushed centre links and polished outer links, it is a comfortable fit. If there is one thing that was perhaps jarring about the original flat-link Omega bracelets it was their flimsiness, not to mention the stretchy links that are none to kind to men with hairier wrists. While this bracelet style is nothing new, it has been adapted to these new Trilogy models but even nicer, is the old-style Ω that has been used on the clasp and in true vintage fashion, slightly overlaps the bracelet. 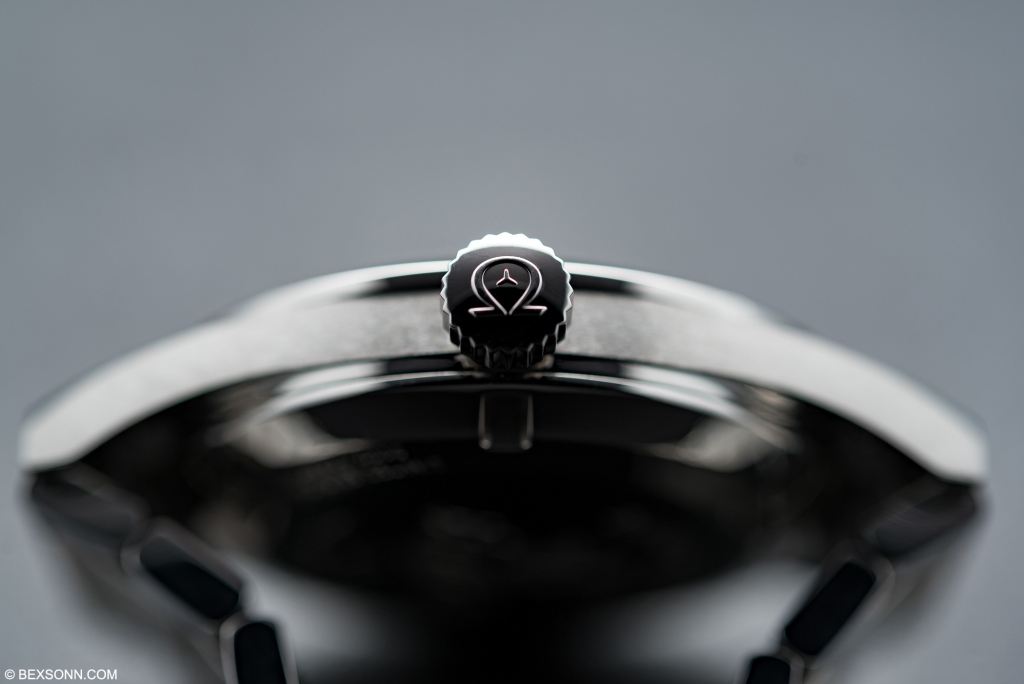 Again, Omega’s attention to detail goes even further. You’ll without doubt notice the signed crown sports the old-style Ω symbol again but look closer and what you’ll see is a symbol that looks like the Mercedes emblem. This is what is known by those in the know as a Naïad crown but what exactly does this mean? The original Railmaster used a Naïad crown, which Omega also used on the Seamaster and Speedmaster. The crown improves on the water resistance of the watch as the pressure increases the crown further seals. The fact that Omega have even included this on these 60th anniversary pieces just displays their commitment in staying true to the originals. 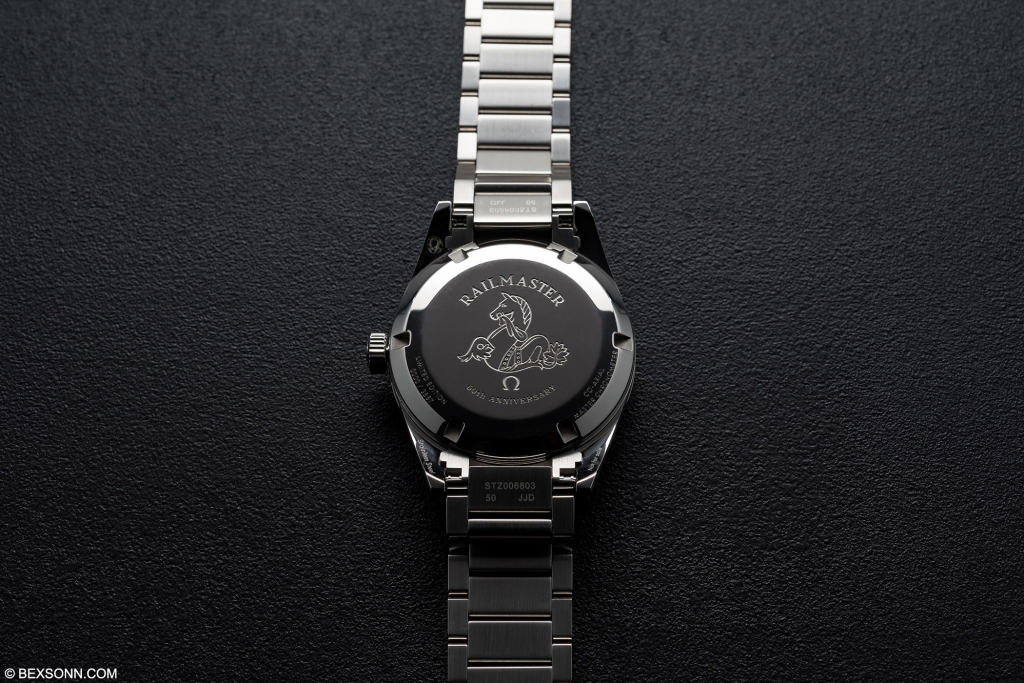 Turning the timepiece over you’ll notice there is a solid screw-down case back, with the hippocampus emblem and the arched Railmaster inscription. However, I think what is more important is what is beneath this case back. The CK2914, as mentioned, was impervious to >1000 gauss and made use of a manual wound calibre 284, 285 and 286. As you’ll perhaps be aware, back in 2013 Omega introduced a Seamaster Aqua Terra that could withstand >15,000 gauss, this Railmaster takes advantage of this feat. The watch is powered by the automatic Omega Master Chronometer calibre 8806, which can resist magnetic fields of up to >15,000 gauss, with a power reserve of up to 55-hours.

Though the likely question you may have is why did Omega choose to make it automatic (self-winding)? I had this exact same thought when I heard what movement was inside. As you’ll know, Omega adopted the Co-Axial Chronometer movement some years ago and have been using it when and where possible. While it has its immense benefits, the draw back was they were only available as an automatic movement. However, this changed when Omega introduced the DeVille Tresor, which made use of their first manual-wound Co-Axial calibre 8511. Now, you’d think this would perhaps make the perfect movement for the new Railmaster that would’ve also kept it in line with the original, no? But Omega opted for an automatic movement, why? The answer is probably simpler than one would’ve thought: the aim for Omega was to compete with that other well-known anti-magnetic timepiece from that brand we mentioned at the beginning… 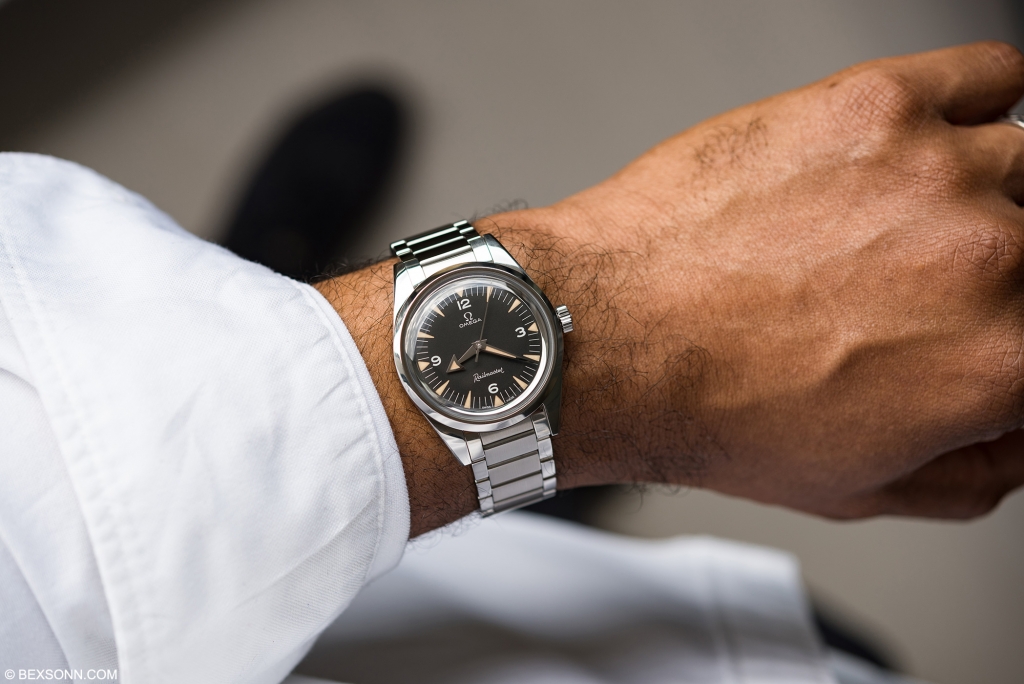 For enthusiasts who have somewhat of a soft spot for the Railmaster, what Omega have created is something really special. The 60th anniversary Railmaster has been well executed and is in keeping with the true spirit of the CK2914. As already mentioned, Omega’s attention to detail is something to be admired. Even little things such as the Naïad crown and the use of the original Ω symbol in multiple places, including on the domed sapphire-crystal won’t go unnoticed by collectors. Though, one detail that may go unnoticed is the slightly discoloured dial, which is ever-so-slightly brown – I know it’s hard to see but believe me, it is.

Of course, some may bemoan the fact the dial makes use of faux patina, to be honest I can’t see how the Railmaster or any of the other three pieces in the trilogy would’ve worked without, so this conscious decision by Omega only makes sense. The use of an overlapping Ω on the clasp is a nice touch, that said, while the bracelet is super comfortable I can’t help but think it could’ve been a little more refined – it does add some serious heft to the watch. A slightly thinner bracelet would’ve been more in-keeping with the original but also would’ve helped to make wearing it an even more nostalgic experience. 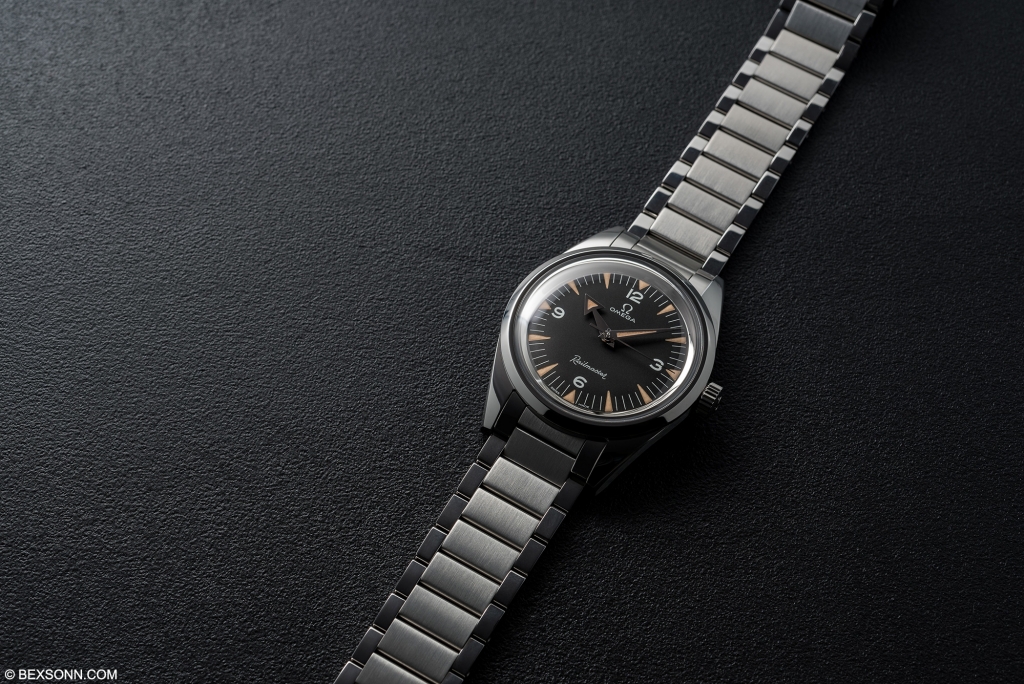 The new anniversary Railmaster is a coup de maître, so too are the others from this trilogy but I’m more drawn to the Railmaster. Of the original trilogy, the CK2914 has always been a tad easier to find, though things have changed quite a bit recently, simply because it wasn’t as popular but it’s simplicity is its allure in my opinion. Its unpopularity is also mirrored in the price department too, in comparison to a 1957 Speedmaster or Seamaster, the Railmaster is more attainable but make no mistake it will set you back about £10 – £15K and with the release of this piece perhaps even more. When timepieces like these a re-issued in limited quantities, this always triggers intrigue in the original model, setting in motion an increase in their value. But this new limited edition Railmaster presents an opportunity to own a slice of yesteryear at a much more moderate price. 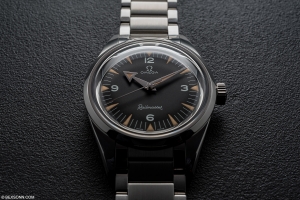 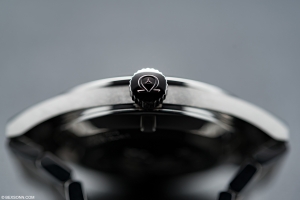 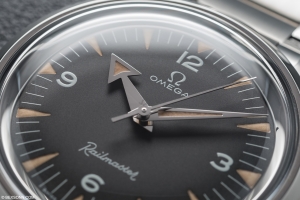 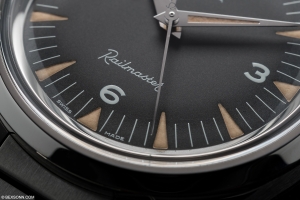 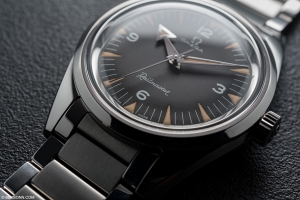 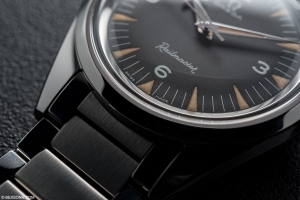 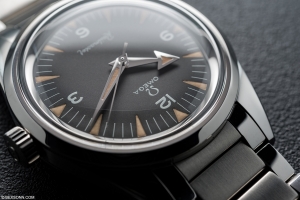 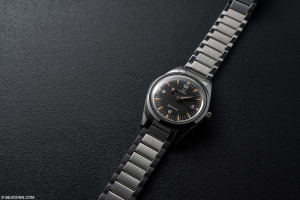 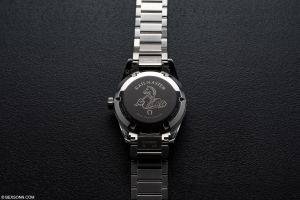 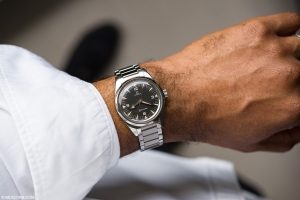 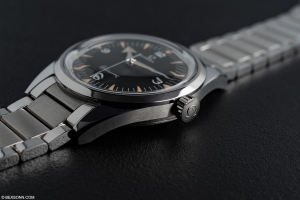 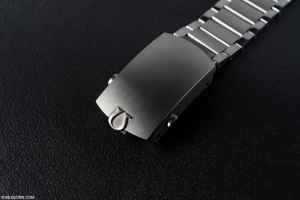