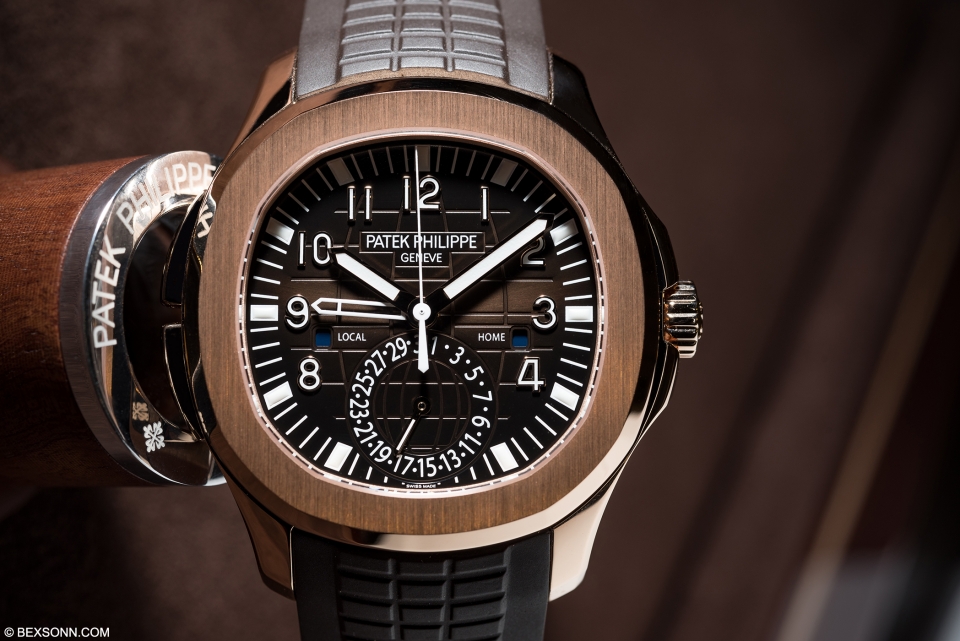 It was way back in 1997 that the Aquanaut first made its appearance and it was considered something of an oddity. It was a Patek sports watch made to appeal to a younger audience, which was something that didn’t quite make sense back then. 19 years on and while it still hasn’t been fully embraced by the hardcore Patek collector, it has indeed become exactly what Patek had hoped; a Patek for the younger audience. In 2011, Patek introduced the Aquanaut Travel Time in stainless steel, which perhaps made it one of the best all-round tool watches Patek had produced to date. At this year’s Baselworld, they introduced the Aquanaut Travel Time once again, however, in rose-gold, which as we’ve highlighted before can defeat its initial purpose. 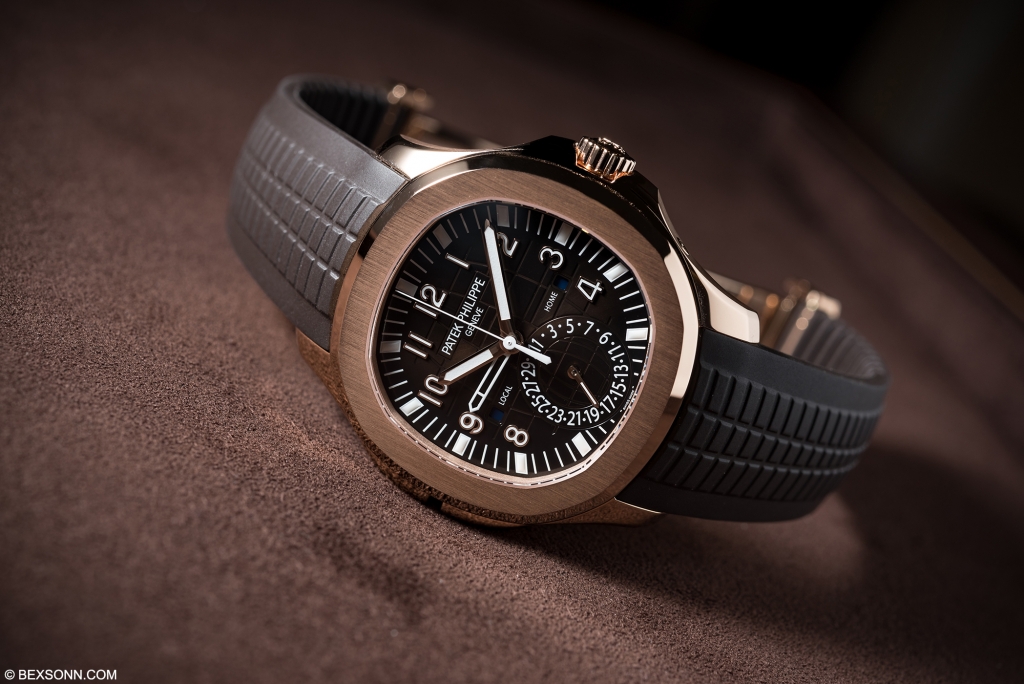 The new rose-gold Aquanaut Travel Time 5164 is not too dissimilar to its predecessor; it of course is still 40.8mm in diameter and while this isn’t quite Patek Petite, in all honesty fits snuggly on the wrist as one would come to expect. It is nicely fixed to the wrist via a brown rubber strap, which is a reminder that you are indeed wearing a sports watch. 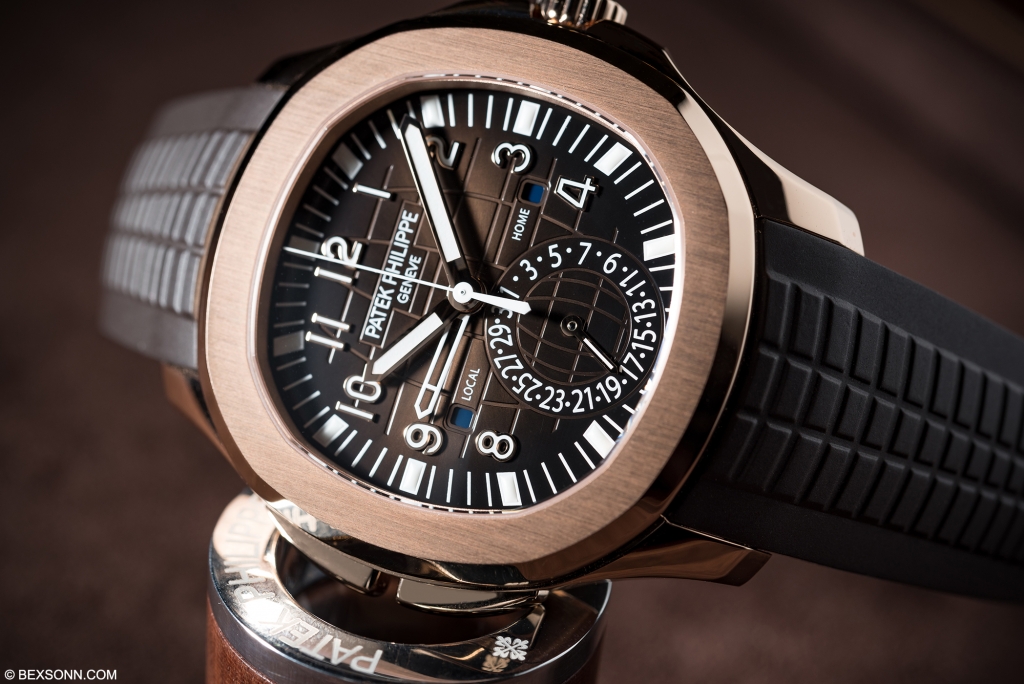 Again, like the Steel version released in 2011, the Aquanaut Travel Time utilises the same dial layout, with numerals clinging to the hour markers from 8 o’clock through to 4, you could be forgiven for thinking that the dial seems a bit too busy at first glance. But when you examine it in more detail, you begin to see that this is in fact quite the opposite. At 6 o’clock is a subsidiary dial date track and just below 3 o’clock and 9 o’clock on either side are apertures that display the local and home respectively – these are day/night indicators, which is a feature we also saw on the 5990/1A. The brown dial, which matches the “Tropical” composite strap, makes use of a grid like pattern that mimic latitude and longitude global lines, a pattern that can also be seen in the date sub dial.

The second time zone is displayed via a skeletonised hour hand; which when not in use remains hidden beneath the hour hand. The two push pieces, which smartly resemble crown guards, on the opposite side to the crown serve as the two time zone correctors for the frequent jet setter to toggle the skeletonised hour hand backwards or forwards. 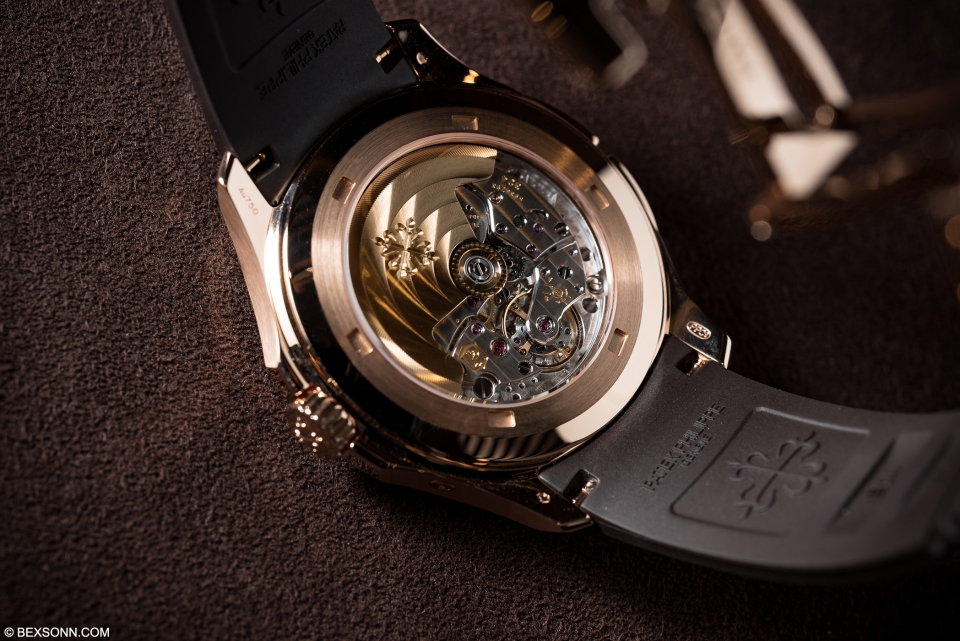 Beating away at the heart of the 5164R is the calibre 324 S C FUS. The ingenious “FUS” device actually dates back to a patent granted to Patek in 1959. It facilitates bi-directional adjustments of the local time in hour increments. It is isolated from the going train when the time-zone settings are changed, which in turn prevents damage to the balance and helps stabilise the accuracy of the timepiece. Rightly so, the movement is made visible through the sapphire case back allowing you to see the heavy central unidirectional 21K gold automatic rotor. The movement only measures 4.82mm, which is rather impressive considering 294 components make up this movement. It has a power reserve of some 45 hours and like all modern Pateks, features the PP Seal of approval. 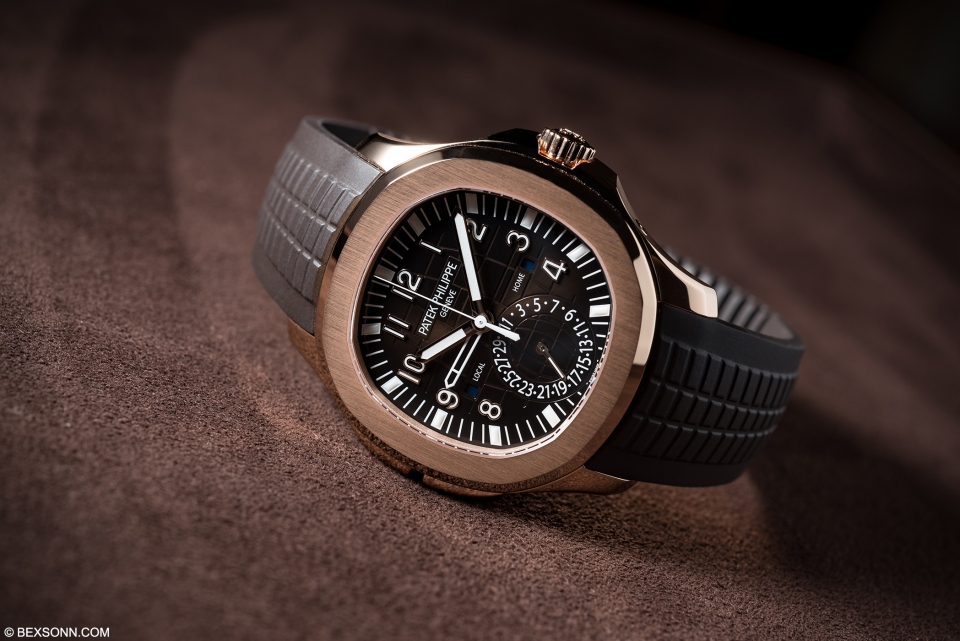 Now, it’s not often that a watch which was greeted with such skepticism over a period of time becomes a watch that many consider to be, perhaps, their ultimate wristwatch. I say this because it is a watch that not only looks the part but can also play many different roles too. It works whether you are dressed down or up, plus it has the added bonus of being able to track a second time zone. It is practically one of the best travel companions out there to be honest. It is, arguably, the perfect watch for the one watch guy – of course one that has deeper pockets than the average Joe.