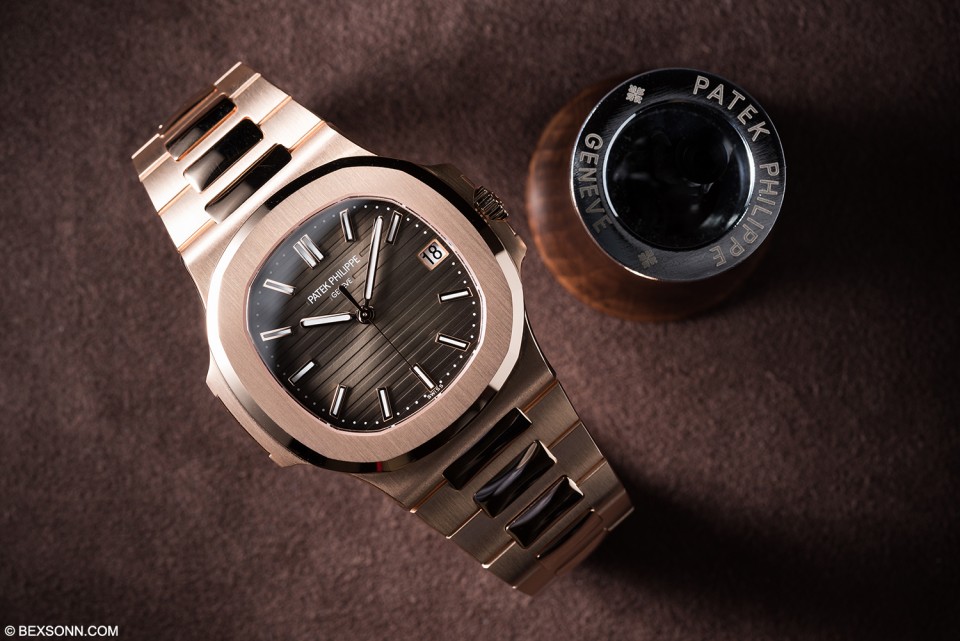 Patek Philippe Nautilus 5711/1R: A solid gold sports watch, is perhaps, horology’s greatest oxymoron. A timepiece intended for performance and usability, yet fragile and heavy from the use of gold, it is as polarising as it gets. The Patek Philippe Nautilus 5711R, is in many ways, one of the founding fathers of this peculiar phenomenon. (You know who the other one is)

The renowned Gerald Genta designed the Patek Philippe Nautilus. Released in 1976, a conservative time when there were two distinctive segments in the world of horology – the tool/sport watch, and the luxury dress watch. A few years earlier, Audemars Piguet had released the Royal Oak Jumbo, also designed by Mr.Genta, to a mixed response. Both in stainless steel, but costing the same as a solid gold watch, the public were perplexed as to how it made any sense at all, and fair enough! That being said, it is safe to say that today, that move proved to be a masterstroke as the Royal Oak and the Nautilus are as popular as ever and seen are as icons of their generation.

Today, the Royal Oak and Nautilus are seen as complimentary, this wasn’t always the case. Fresh from the Royal Oak’s release in 1972, though not seen as an immediate success, Audemars Piguet were seen as revolutionaries taking a bold risk. A statement perhaps enjoyed by them but in 1976, a mere four years later, came the Patek Philippe Nautilus. Jean-Claude Biver, who was working at AP at the time, recalls how bewildered he was when it came out and calls it the ‘first watch he ever hated.’ Don’t worry, now that he is not working for them, he loves the watch and even owns a 3700A himself. Anyway, Audemars Piguet saw it as a blatant copy, albeit an uglier version, of their iconic Royal Oak, not too dissimilar to the perception today of the Hublot Big Bang being a copy of the Royal Oak. Funny that all three of these watches are based on the porthole. Regardless, it is clear today that in the long run, the presence of two major haute horlogerie houses releasing a stainless steel luxury watch at similar times helped gain momentum and affirm to the public that this really was a legitimate thing. 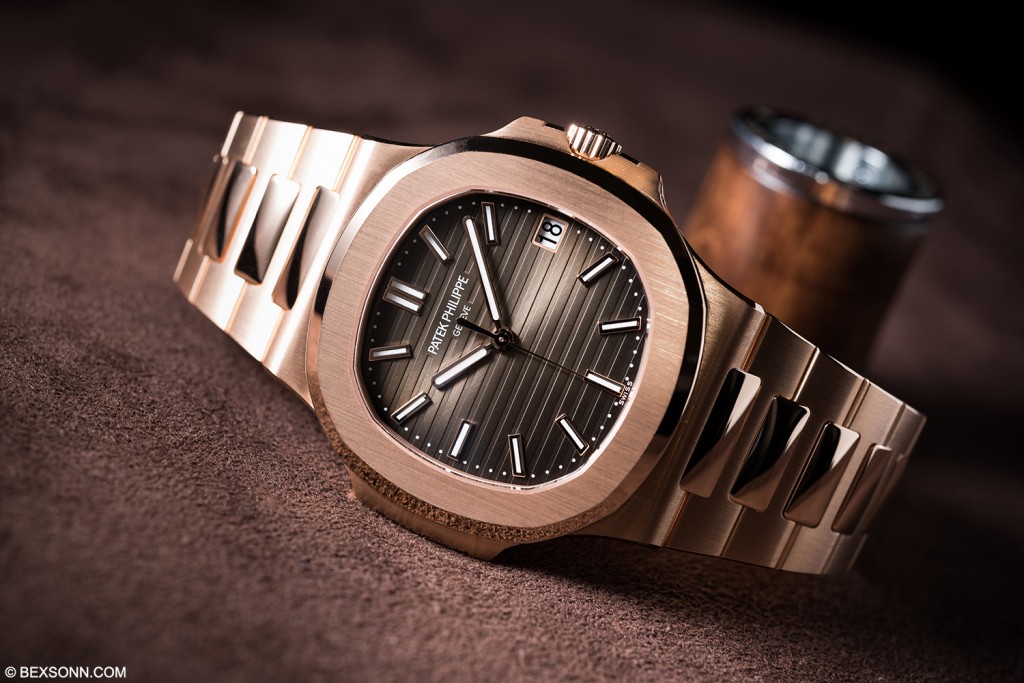 Fast forwarding to the present day, we have the latest generation of the Nautilus, the 5711. The one we are looking at today, is the latest iteration, not in stainless steel, but in rose gold with an integrated bracelet for the first time. I take cue from the purists and have to admit I much prefer the Nautilus on a bracelet rather than a leather strap, so this is something I liked from the start.

I usually start my articles with the most endearing factor of the given watch, and today for the 5711R, it has to be the finishing and details of the case and bracelet. The depth achieved from the watch through different finishing techniques is unbelievable, considering it is all made from the same material. With the mirror polished centre links and edges contrasting with the brushed surfaces, this watch screams quality. Words cannot describe the level of finishing, so I simply invite you to look at the photos and decide for yourself. That being the case, the amount of mirror polished surfaces does tend to lend its way to scratching and scuffing, but really, this casework is what distinguishes haute horlogerie from the rest, what separates the men from the boys. The word ‘superlative’ cannot be used more aptly. 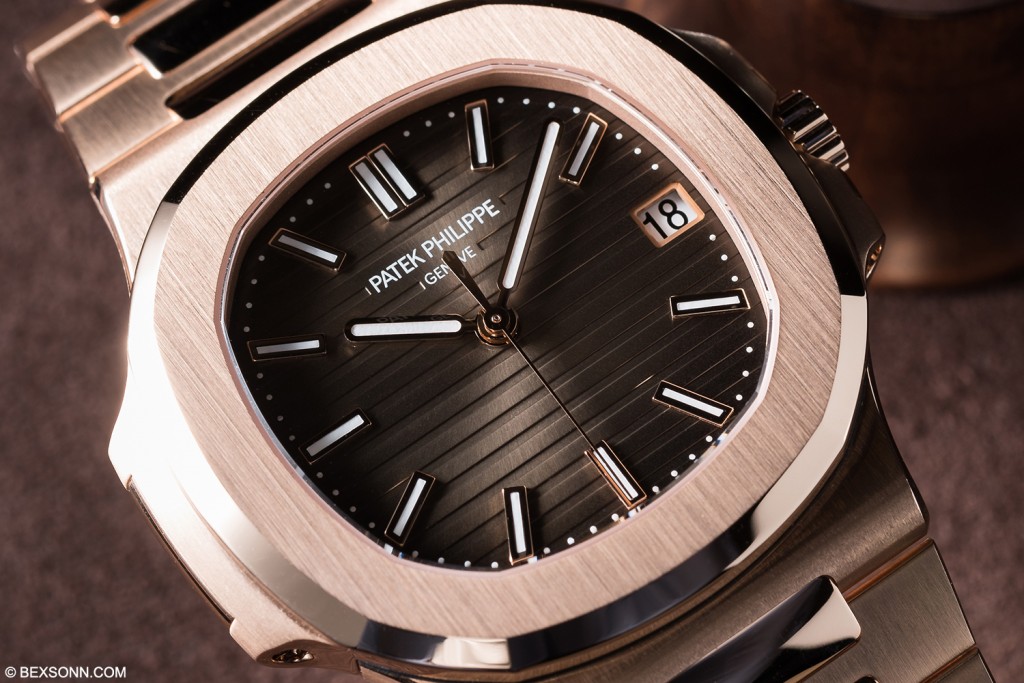 Moving on to the dial, I have always enjoyed the subtleties of a Nautilus dial, whether in stainless steel or gold. In what seems to be a classic combination, Patek Philippe has combined the warm hues of the rose gold with a new, deep and dark brown colour for the dial. With it’s classic stamped guilloche dial, the brown tones on the dial actually vary with each horizontal line, producing something that changes its tone, depending on lighting. With rose gold index markers and hands, it works harmoniously well with the case. 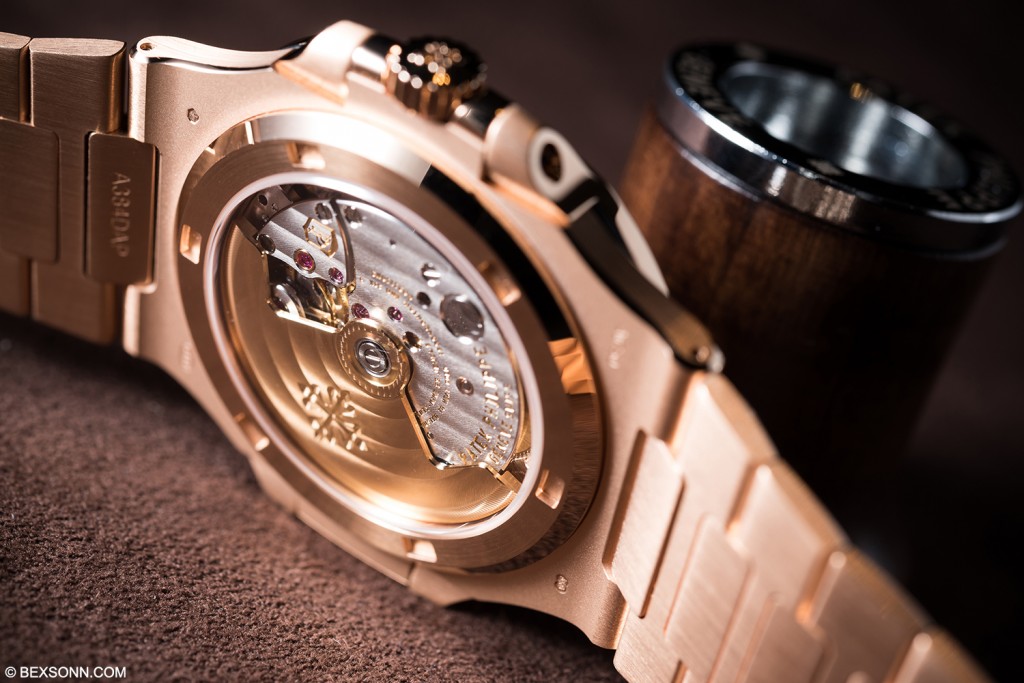 Powered by the calibre 324 SC, the Nautilus 5711/1R is an in-house self-winding movement that can be seen through the exhibition case back. It has everything you would expect a Patek movement to have: discreet but expertly hand-finished parts, a Gyromax balance and Spiromax balance spring. The watch has a power reserve of up to 45 hours and a depth rating of 120m.

I am fully aware of the apprehension some people have towards all gold watches, and it is completely understandable, considering its reputation. For one reason or another, it has become a reflection of certain negative traits and it really is a love/hate thing. This Patek Philippe 5711/1R is without a shadow of a doubt a magnificent and superbly crafted watch, but where the subjectivity comes in is from how culture has adopted a certain perception towards it. I personally love gold and would happily wear this heft of a 5711 on my wrist, albeit, it would have to be a very considered decision. You won’t see me in an all white outfit and snakeskin shoes rocking this Nautilus, but instead perhaps slightly under the cuff, in a muted and understated suit. You see, it’s all a balancing act, of giving and taking. Remember folks, it’s not what you wear, it’s how you wear it. 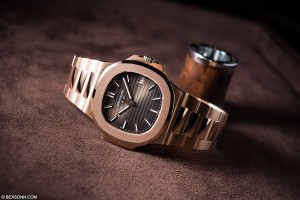 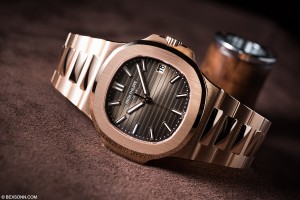 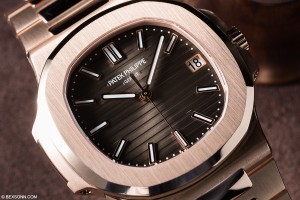 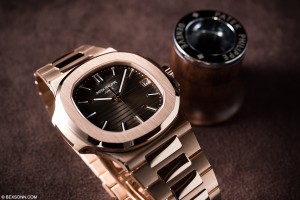 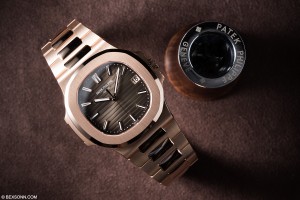 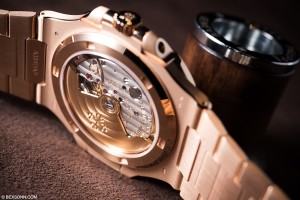 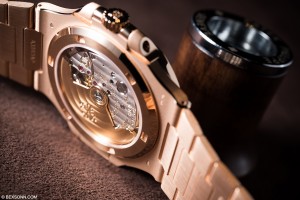