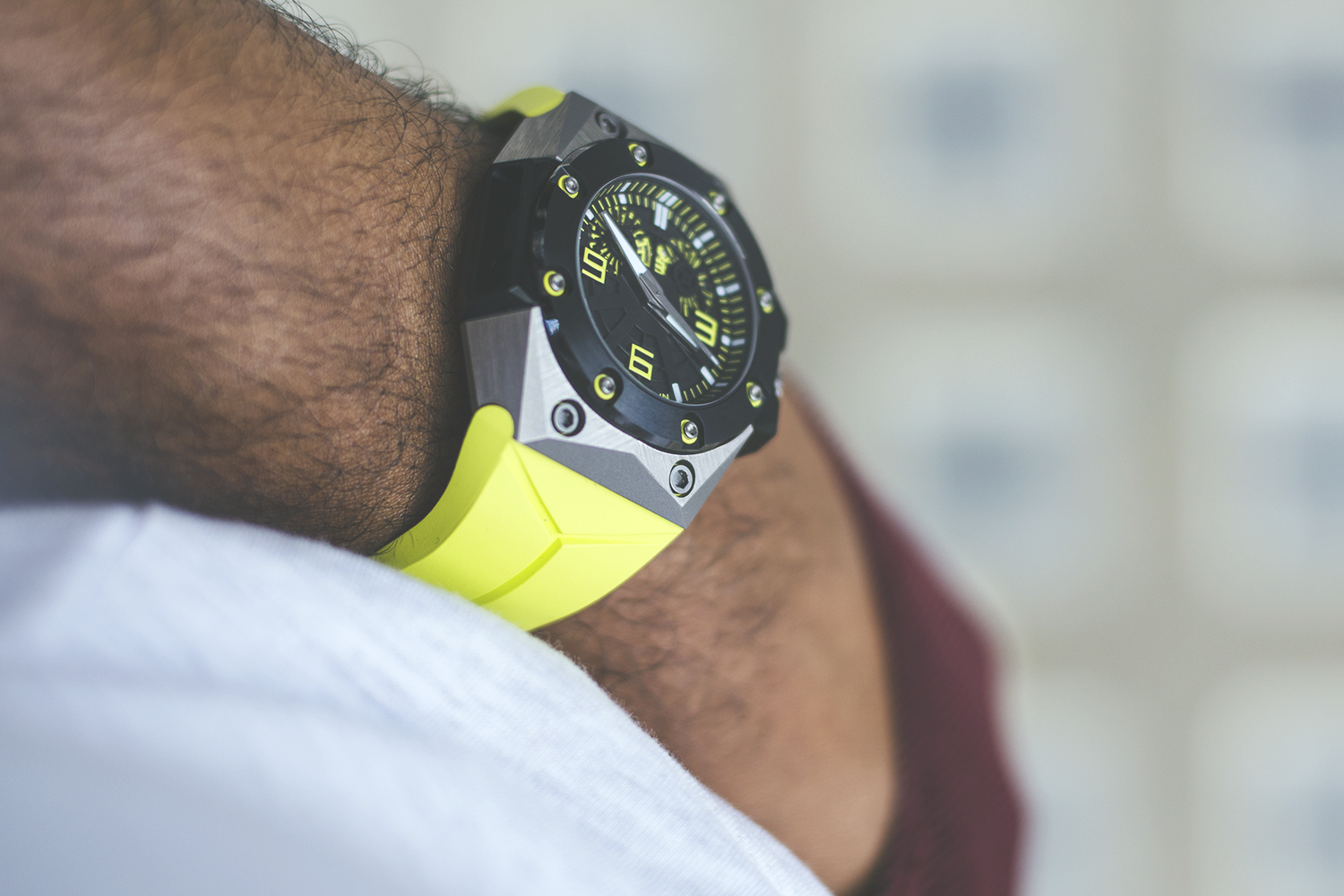 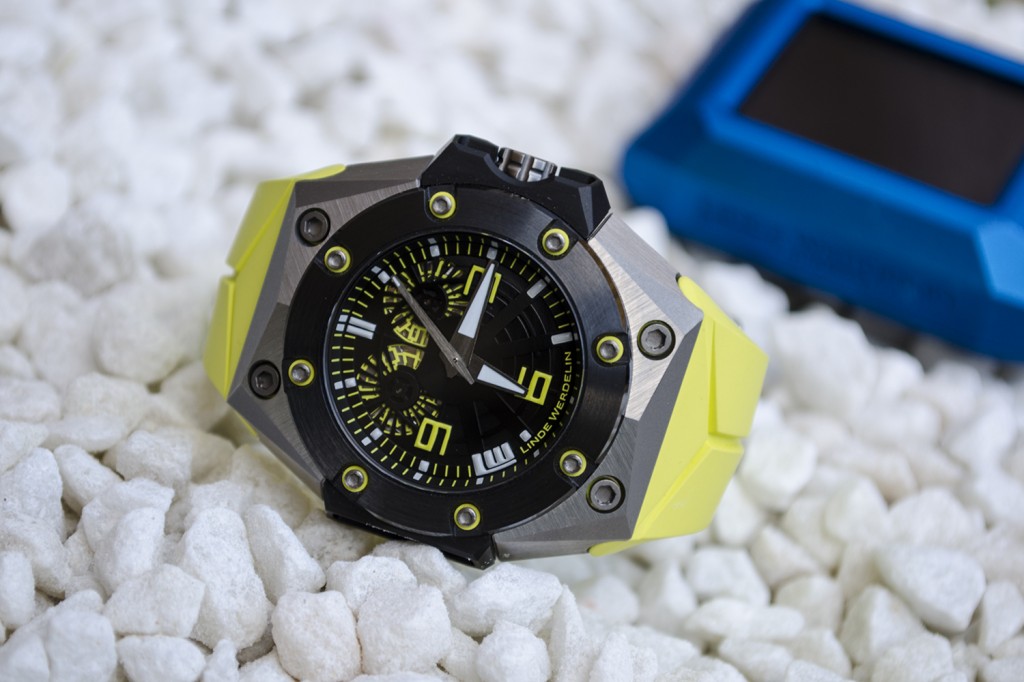 Linde Werdelin Oktopus II Yellow: A couple of weeks ago I gave you an insight into Linde Werdelin and their weight-saving Spidospeed. This week I managed to get my hands on an Oktopus II Yellow. The DNA of the Linde Werdelin case shape is clear but this are where the similarities stop. As the name suggests, the Oktopus II has been designed with diving in-mind. It may not have the traditional, diver’s watch styling you’re probably used to seeing but remember we are talking about a couple of gentlemen who like to push the boundaries when it comes to design.

The Case: has a definite visual impact and kind of reminds me of the latest Bat-mobile, with its sharp angles and stealth like looks. The design of the case may give the impression that the Oktopus II is rather heavy – however, it is quite the opposite. This is down to the case being constructed out of brushed titanium with black DLC treated notches for the Reef instrument, which incorporates nicely with the studded ceramic bezel. The case is constructed out of five parts and is water-resistant to 300M. 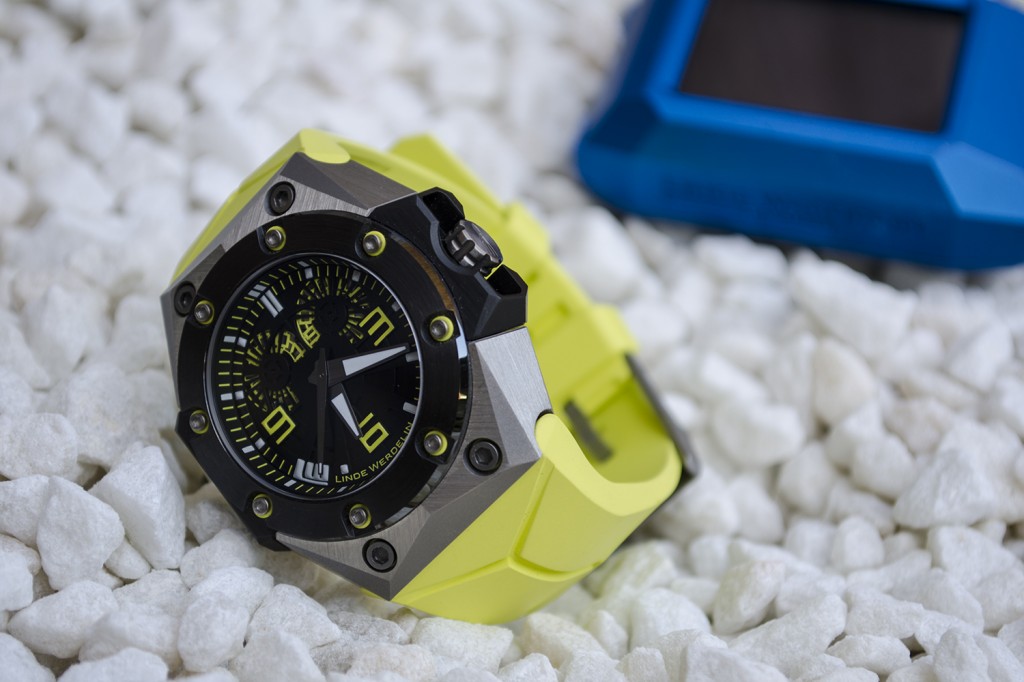 The Dial: is similarly angled and has a very industrious look about it. At 12 o’clock is an intriguing BIG date window; which is made up of two individual skeletonised discs that synchronise to display the date. However, at first glance they can seem a little difficult to read but you’ll soon get used to it. The base of the dial is made up of two black-on-black plates. The upper radial styled plate consists of an outer minutes scale, which extends to the dial flange, as well as digital styled numerals at 3, 6, and 9 o’clock, which almost appear to float. I do like the novelty that the LW logo is at 8 o’clock; you can see the attention to detail in their design.

The Movement: the Oktopus II is driven by a custom-built calibre 14580, made for Linde Werdelin by Swiss movement specialist Dubois-Depraz; which has a power reserve of up to 44 hours. As it is a dive watch there is no exhibition window, instead the case-back is beautifully laser engraved with a cephalopod. 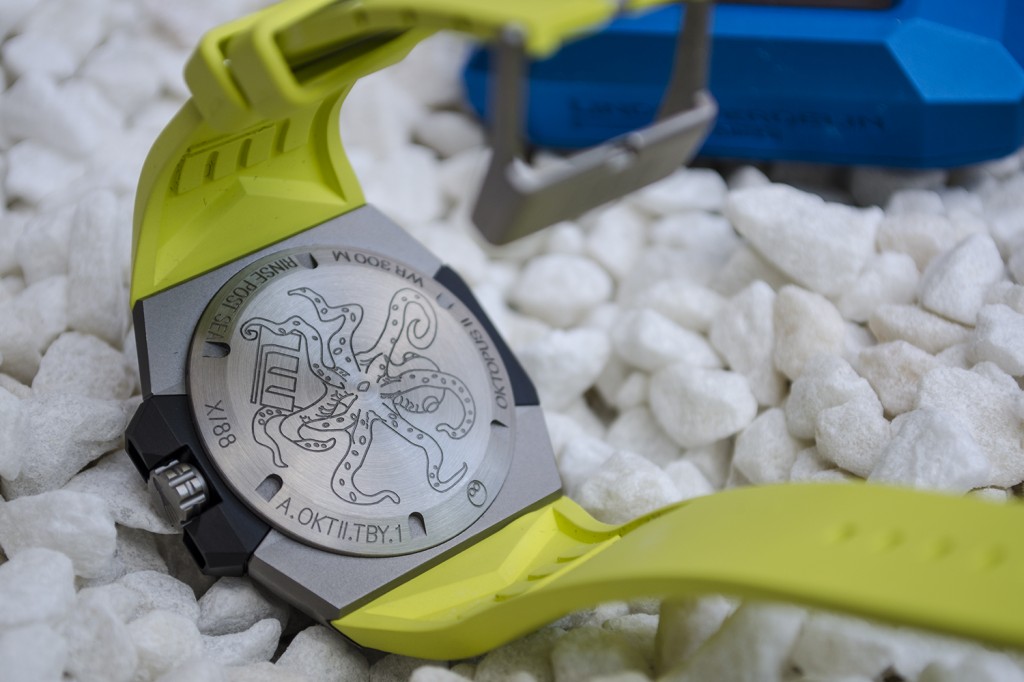 The Strap: the Linde Werdelin rubber strap is probably one of the most comfortable I’ve ever worn. It is very supple and doesn’t have that sticky feeling you can get with others when it comes into contact with a bit of water or perspiration. You may also want to order yourself an extra strap, something a bit more formal, when thinking about purchasing the Oktopus II Yellow. The hi-vis strap may not go with everything.

Conclusion: despite its cubism like design and abstract style, the Oktopus II does not grab me as a true dive watch. There are no markings on the bezel and the dial could prove to be a bit fussy to see underwater; you really don’t want to have to study your watch to see if you’re about to run out of time. This job is left to the Reef instrument, which is an after attachment and costs an extra £1,500. In my opinion it’s a nice everyday wearer and something little different from a traditional dive watch. It would be nice to see in the future a more all in one dive watch as their designs really stand out against the norm.

The RRP of the Oktopus II Yellow is £6,950 (excluding VAT). For more information, visit the official Linde Werdelin website.