Hands-On The A. Lange & Söhne 1815 Tourbillon with Enamel Dial 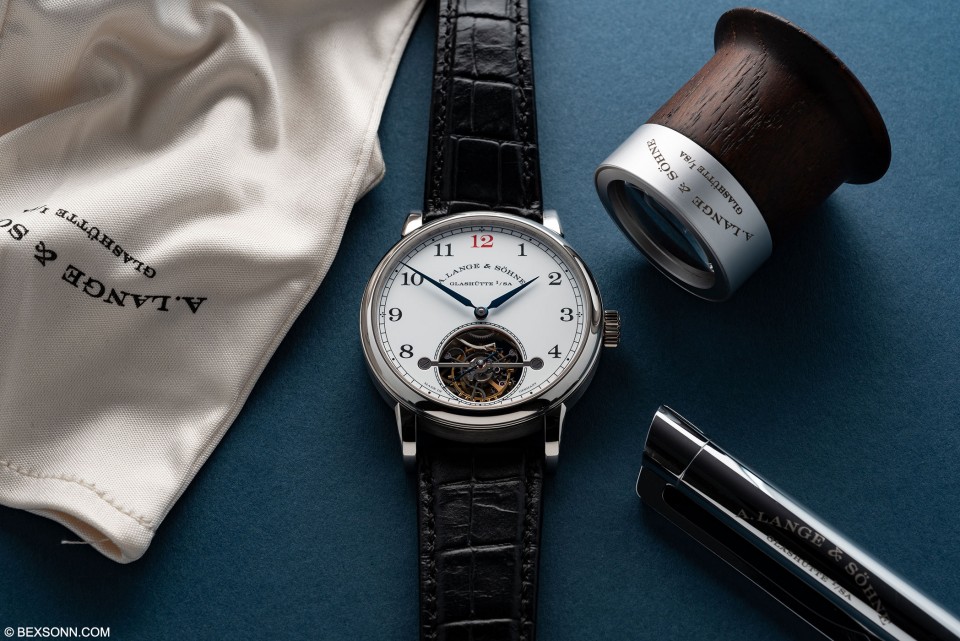 It wasn’t that long ago that Lange celebrated their 200th anniversary with the Lange 1815 Tourbillon Handwerkskunst. Of course, being the 200th anniversary we would expect nothing less from Lange than another brilliant and jaw-droppingly, gorgeous timepiece. The 1815 line is a tribute to Ferdinand Adolf Lange, so it would only make sense that the timepiece bearing his year of birth be developed into something a little more special to celebrate this occasion and my goodness it was. Back in 2014, Lange unveiled the new 1815 Tourbillon with ZERO-RESET function, which we spoke about here and two years later introduced a very special piece to celebrate the birth year of Adolph Ferdinand Lange. While this newly released piece is no Handwerkskunst, it is every bit just as special. 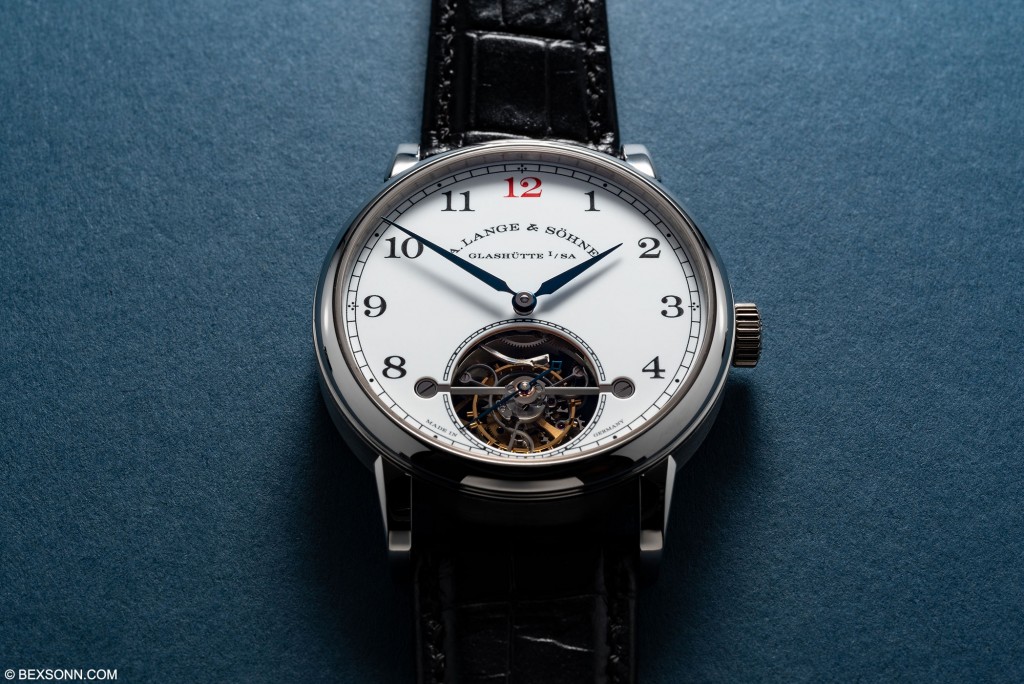 Enamel or Email (in French) is a term often thrown around in the watch industry but just what does it take to make one? Enamel is a soft glass composed of silica, red lead and soda. Mixed together with other elements, enamel is capable of creating intense hues with a subtle, magical depth. Elements used to add hue to enamel include iron which produces a grey colour, chromium which creates a green colour and iodine which makes a fiery red colour. When enamel is heated to temperatures of 800-1200 degrees Celsius, it liquefies and bonds to metal. Enamel is applied to a watch dial using a goose quill. It must be slowly built up to create the appropriate depth so that its colour attains the correct hue. 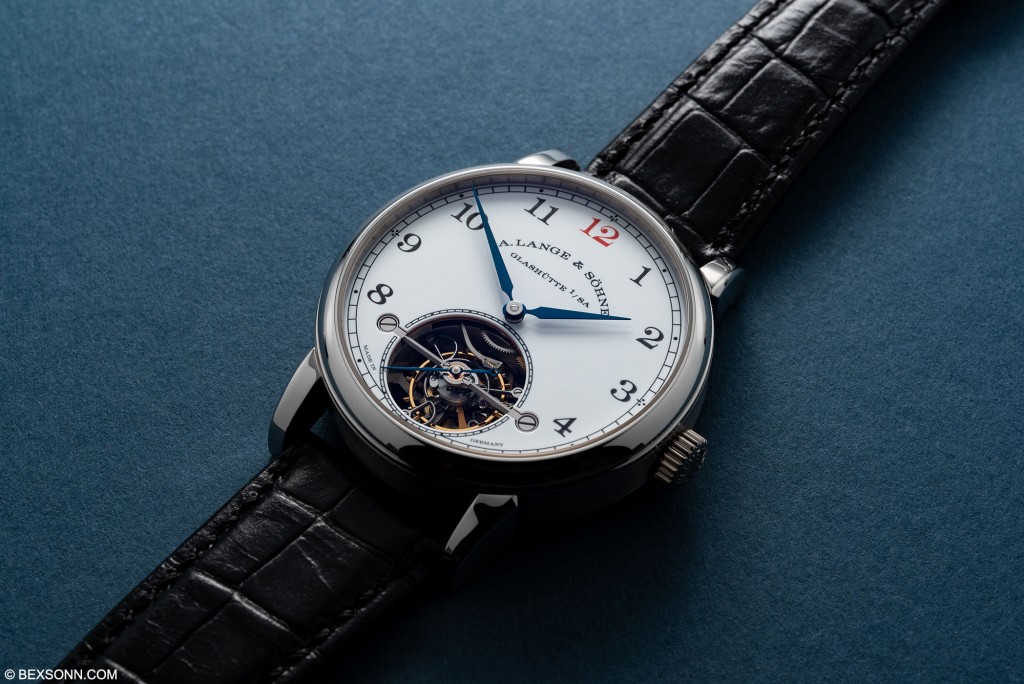 There is no “one” set formula for enamel, which is where the “art” comes in.  The enamel artist can create an infinite variety of colours through varying combinations of silica and metal oxides.  In fact, the process of creating enamel is a decorative art that requires a tremendous amount of skill and patience from start to finish. The problem with enamel is that it is incredibly hard to control and at any stage during the production of an enamel dial, it may crack, air or gas bubbles might emerge and leave tiny holes, or the resulting colours might simply not be optimal – hence the premium. 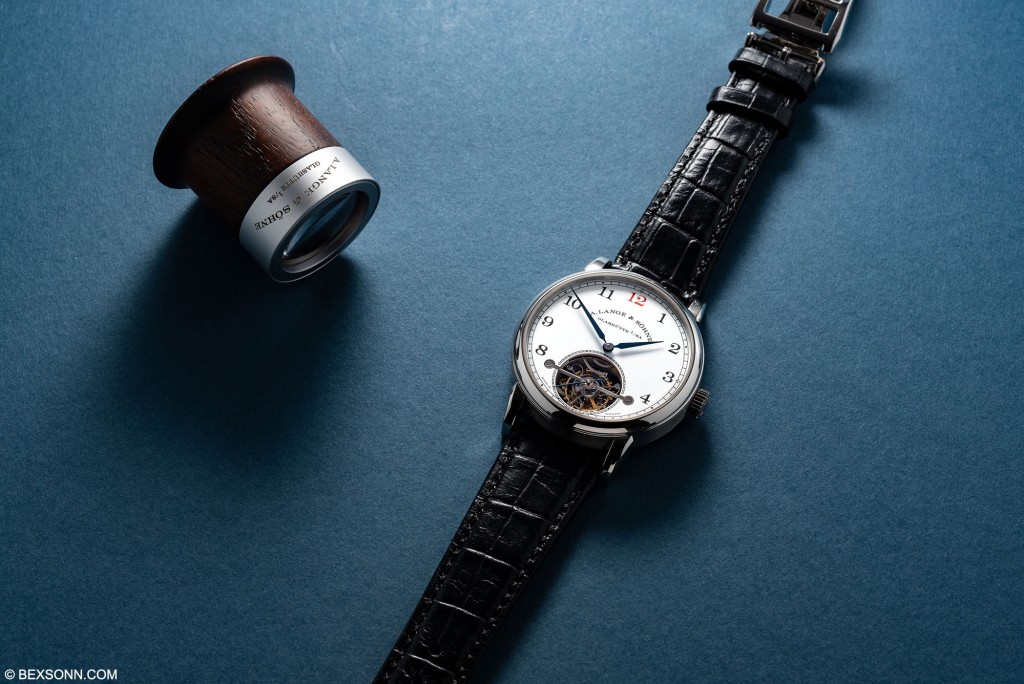 Limited to just 100 examples, the special-edition model features a platinum case with a diameter of 39.5mm. This 1815 as mentioned features an enamel dial and though this is the only real change in comparison to the original example first introduced in 2014, it is what sets it apart from the previous iteration. The crisp and shiny white dial creates the perfect back drop for the blued steel hands and black polished tourbillon bridge. The upper section of the cage is also black-polished, which is a rather elaborate but time-consuming finissage technique. 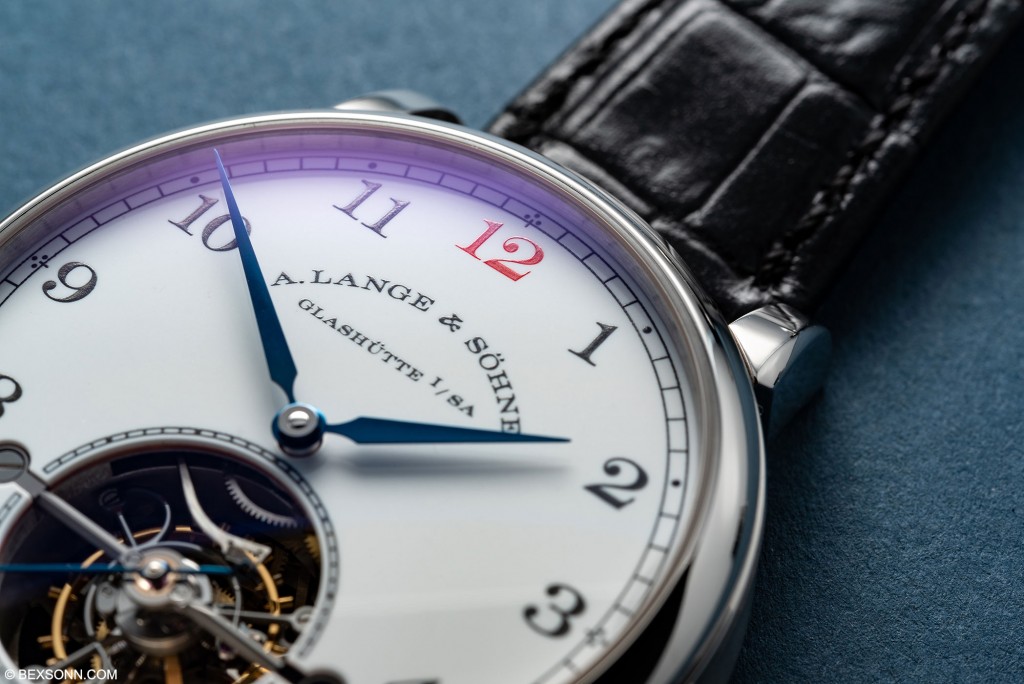 Another detail to take note of is the use of a red 12-hour marker, which interestingly enough has to be separately applied to the dial and while this may sound superfluous, it just goes to show the lengths Lange go to for these minute touches. In typical Lange fashion it features a railway track minute and seconds scale, which hugs the tourbillon aperture. While the 1815 Tourbillon is most definitely modern, one can’t help but notice how archaic the actual aesthetics are – albeit with the open tourbillon (something most definitely contemporary) – but it all seems to work rather well together. 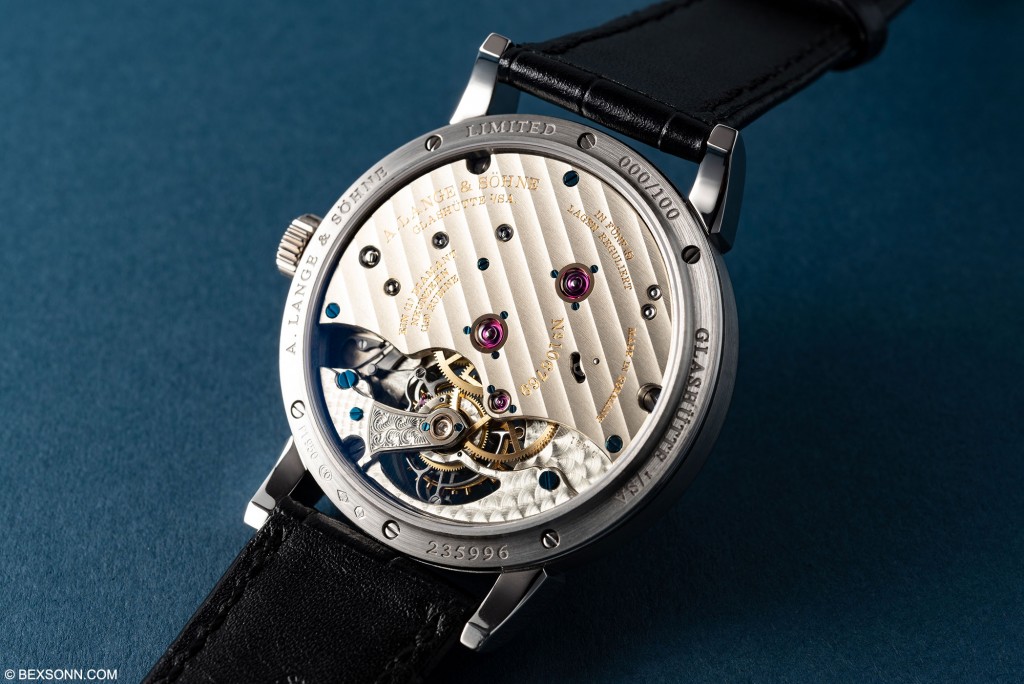 It of course goes without saying that the mechanical precision is reflected in every detail of the lavishly decorated L102.1 manufacture calibre. The elegantly curved shape of the newly designed three-quarter plate is a special hallmark. Thanks to generous cut-outs, the tourbillon with the patented stop mechanism is easily visible from the movement side along with the barrel and parts of the wheel train. 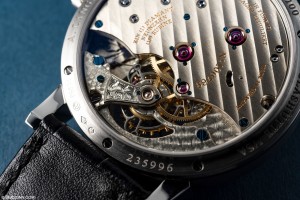 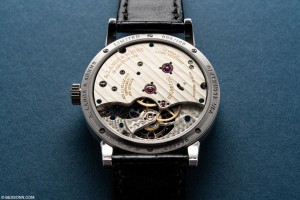 The grained surface of the German silver plate is inspired by historic pocket watches. Bevel-polishing inward angles is a particular challenge. This task can only be performed manually with a sharp, specially designed tool. The fourth-wheel bridge is pierced to provide a better view of the tourbillon. Just like the plate and the caseback, it is endowed with artistic engravings. The diamond endstone of the tourbillon vibrantly accentuates the movement decorations. 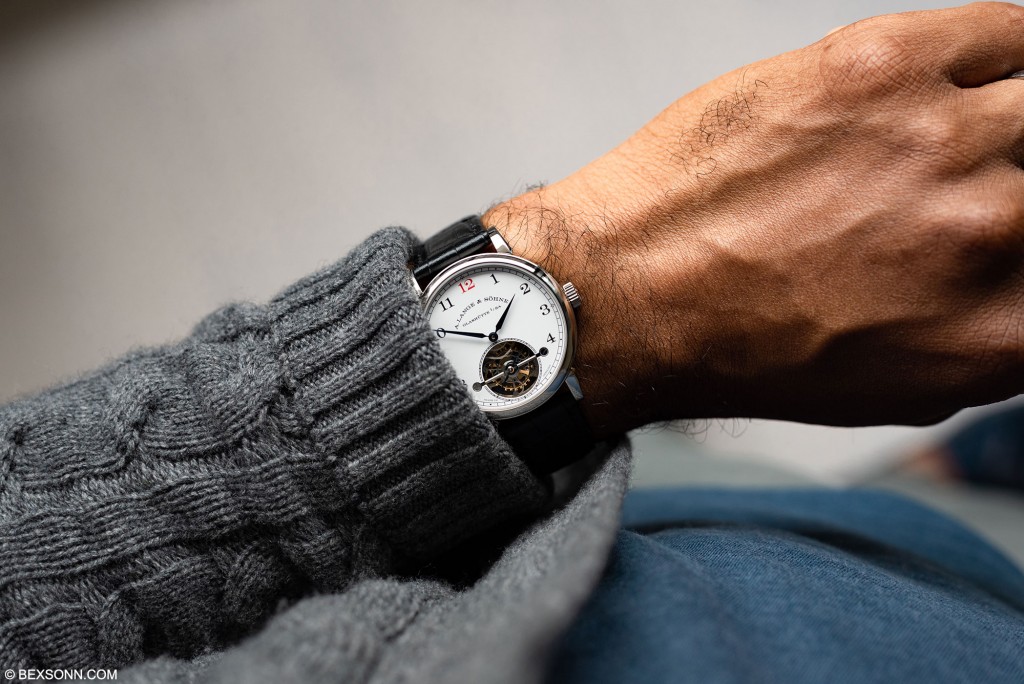 There’s no hiding the fact that Lange are one of my favourite modern watch brands, the attention to detail that is bestowed upon every watch that leaves the manufacturer is nothing short of obsessive. The invention of the exhibition case back is most certainly a huge bonus when it comes to Lange. That said, their dials also receive just as much attention to detail. The 1815 Tourbillon with its Zero-Reset function is a great feat and while its use in modern-day watches is perhaps not required, Lange has a knack of going above and beyond, defining their commitment to the term luxury. However, in my humble opinion it would’ve been nice to see the tourbillon hidden, such as it was centuries ago. Nonetheless, the 1815 tourbillon with enamel dial remains an attractive timepiece that oozes sophistication in a rather modest manner. 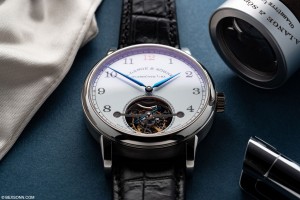 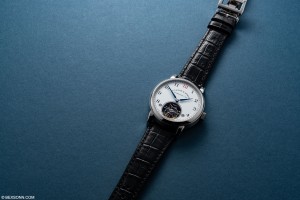 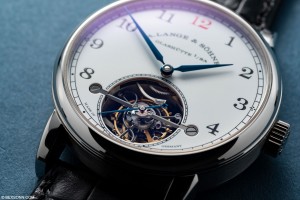 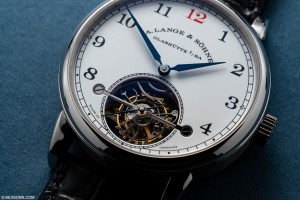 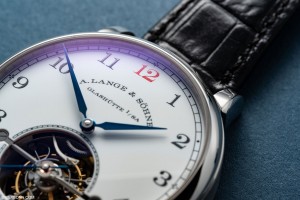 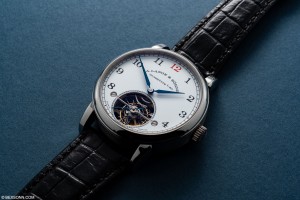 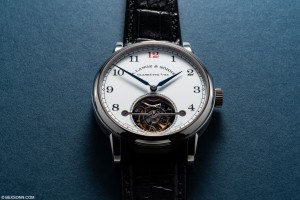 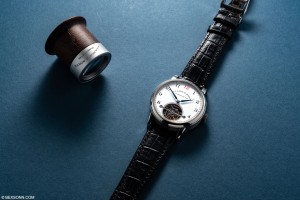 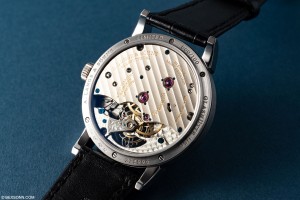 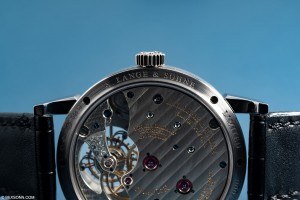 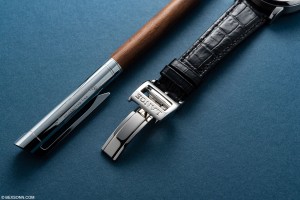 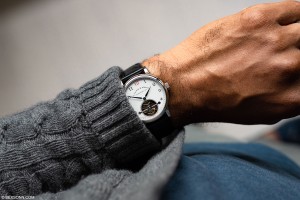