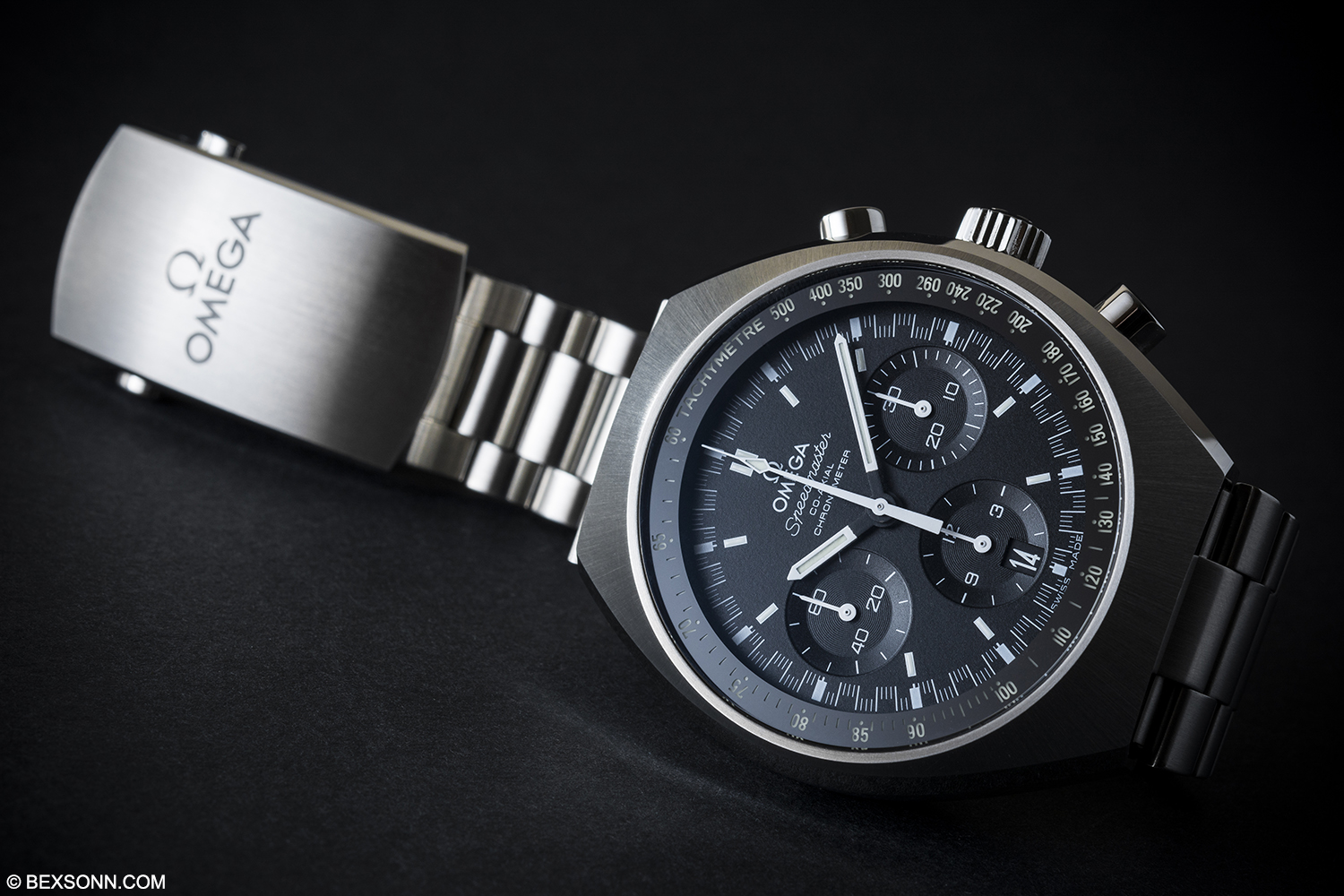 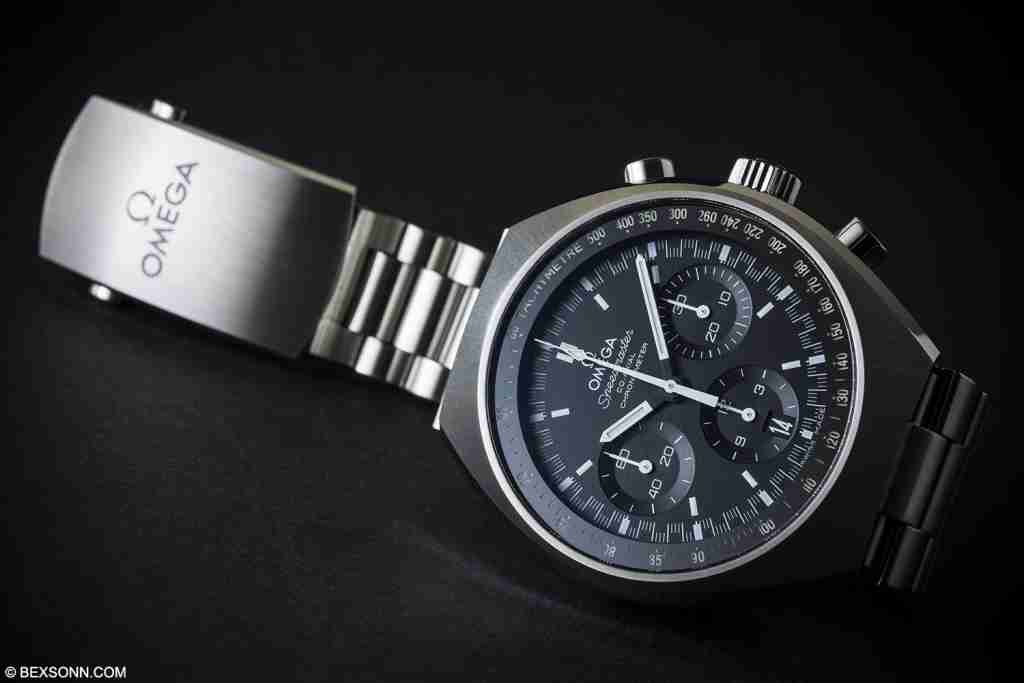 Omega Speedmaster Mark II Co-Axial: Announced earlier in the year, the Speedmaster Mark II was greeted with some apprehension but once everybody really got their hands on it during Baselworld 2014, some attitudes changed, though even I was still a bit sceptical. Fast forward to November and Omega kindly sent one over on loan so we could really get to grips with it and just see whether this new re-issue was worthy of the Mark II title.

The original Speedmaster Mark II was introduced in 1969, which marked a shift from the main Moonwatch, though at the heart of it was the same Lemania based calibre 861 movement used in the 145.022 ST. The calibre 861 had been in production for many years and was succeeded by the 1861 around 1996. The Mark series is a weird and wonderful thing. As you can tell from the barrel-shaped case, it is heavily seventies inspired and differs tremendously from the asymmetrical shape of the Moonwatch. Make no mistake, the professional Moonwatch has always been in production but this was Omega’s little way of updating the Speedmaster to accommodate this era in time. 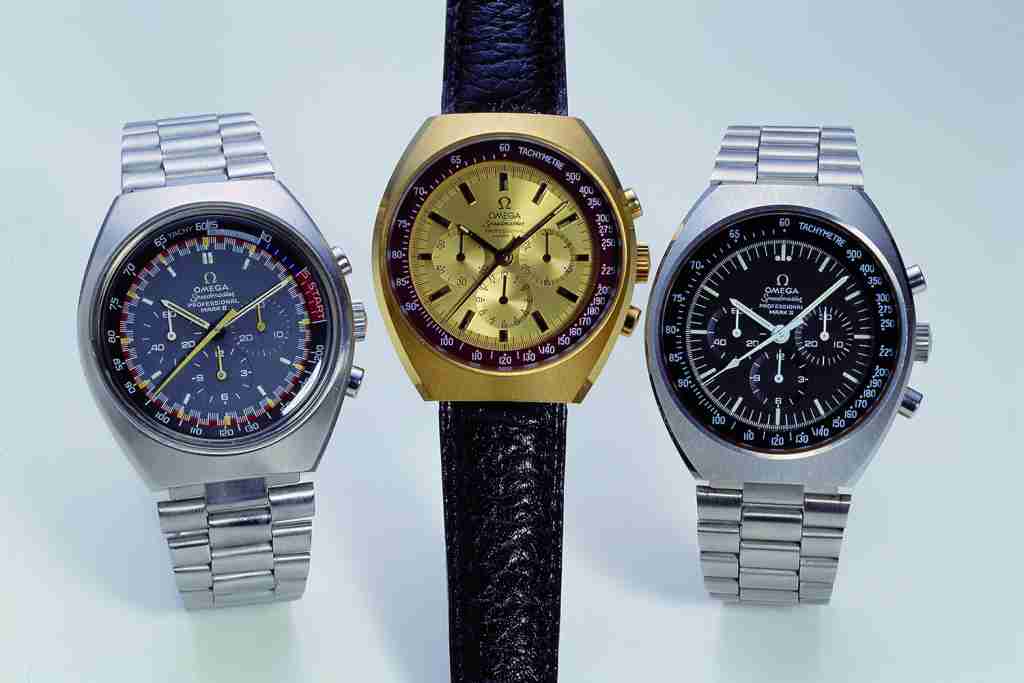 When introduced in 1969, the Mark II had three main variants: firstly, in stainless steel with black dial and white indices. Another stainless steel version but this time with a grey dial with orange and red colours along the minute track, that is also referred to as the racing dial and a gold variant with a gold dial and maroon tachymeter bezel. Though as the name ‘Mark’ suggests, there were proceeding marks too. When production stopped in 1972 of the Mark II, the Mark III had already been available to buy for a year or so. 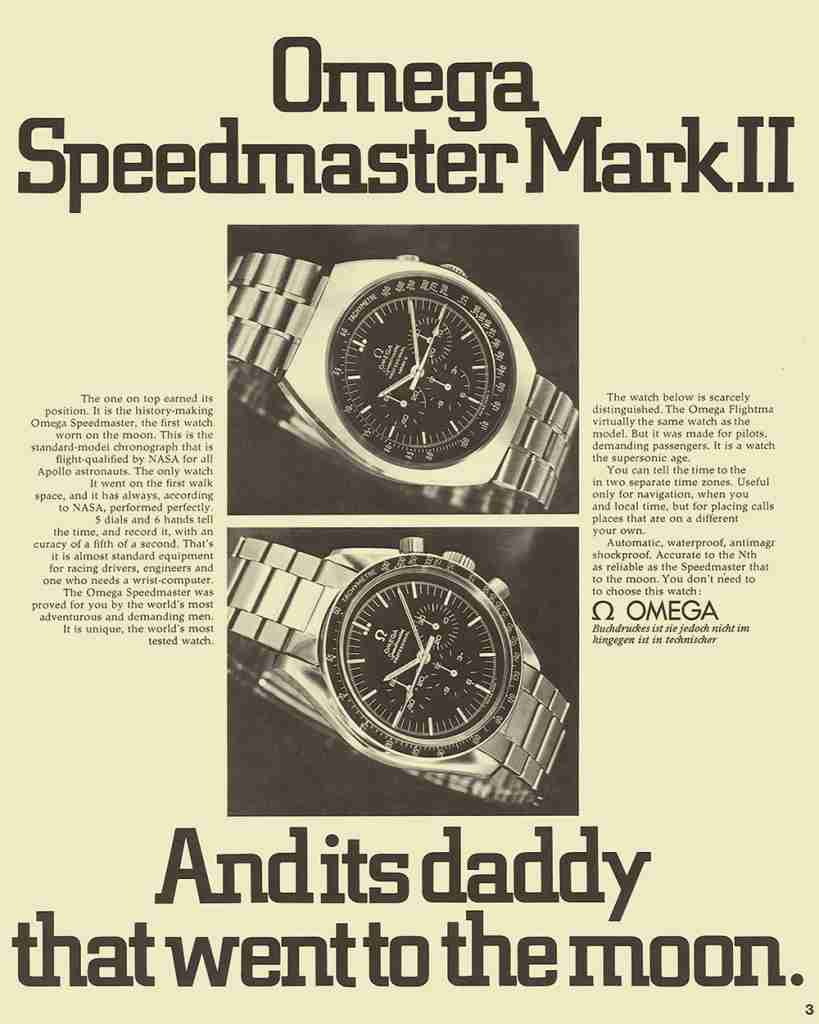 The Mark III was considered a bit of an odd bird and sported a joint venture of Omega and Lemania in developing the automatic calibre 1040a. And of course when production was stopped on the Mark III in 1973 it was preceded by the Mark IV and there was even a Mark 4.5. Finally released in 1984 and only made available to the Central European (German speaking countries) market was the Mark V. The Mark Series is a fascinating group of Speedmasters that when explored will only intrigue you further. However, it would be good to find out if Omega ever considered replacing the Moonwatch with the Mark series? 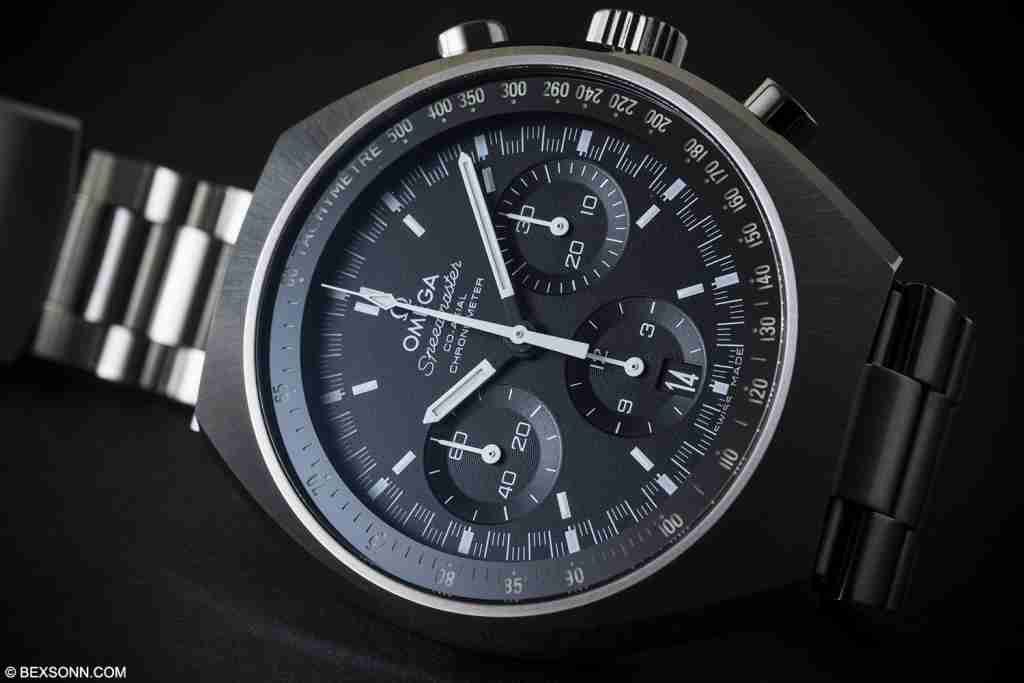 As mentioned in our brief post back in January, the Speedmaster Mark II re-issue was available in two variations, though a third was also revealed to us during Baselworld 2014 for the 2016 Rio Olympics, which makes use of the colours gold, silver and bronze around the outer track of the three subsidiary dials. As said before, Omega do like conjuring up a bit of nostalgia and what’s really cool about the re-issue is just how close Omega stayed in regards to design to the original 1969 model. But of course Speedmaster aficionados will immediately notice the inscription of ‘Professional’ is not on the dial and instead replaced with ‘CO-AXIAL’. 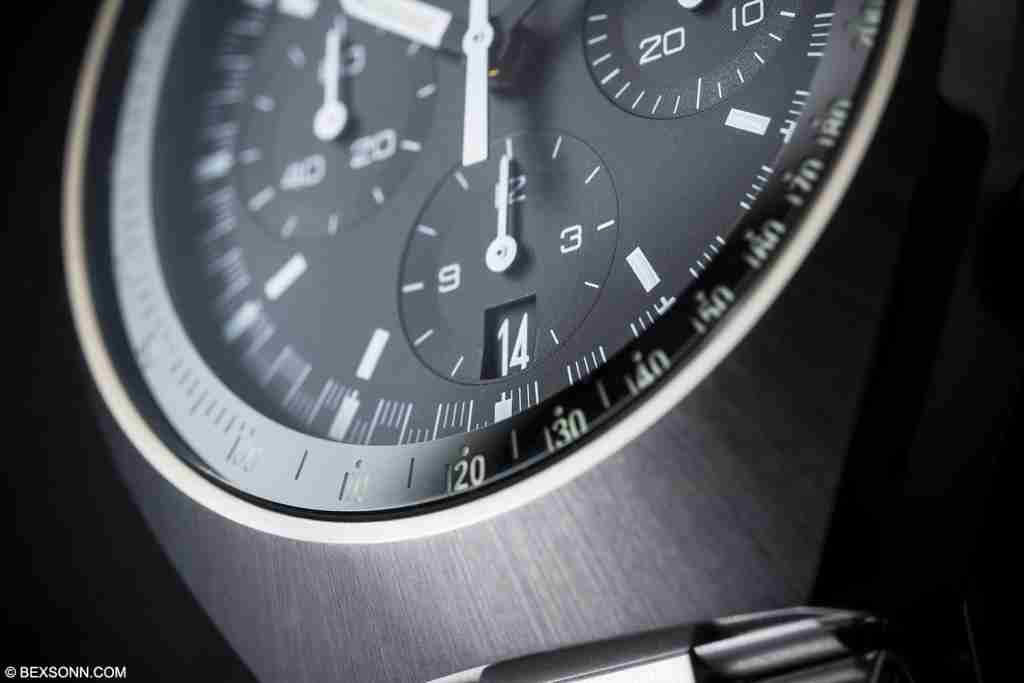 The Speedmaster we managed to get our hands-on was the black dial variant and at first glance you’ll notice the dial has some subtle differences but as you explore you’ll see just how far from the original it is, yet it still retains the same look somehow. The biggest difference you’ll notice straight away is the date window at 6 o’clock within the hour sub dial counter. The dial also uses different minute markers to the original, instead of using the same indices as the professional Moonwatch model, Omega have decided to use a racing style dial – even though this was something only originally seen in the grey dial version. 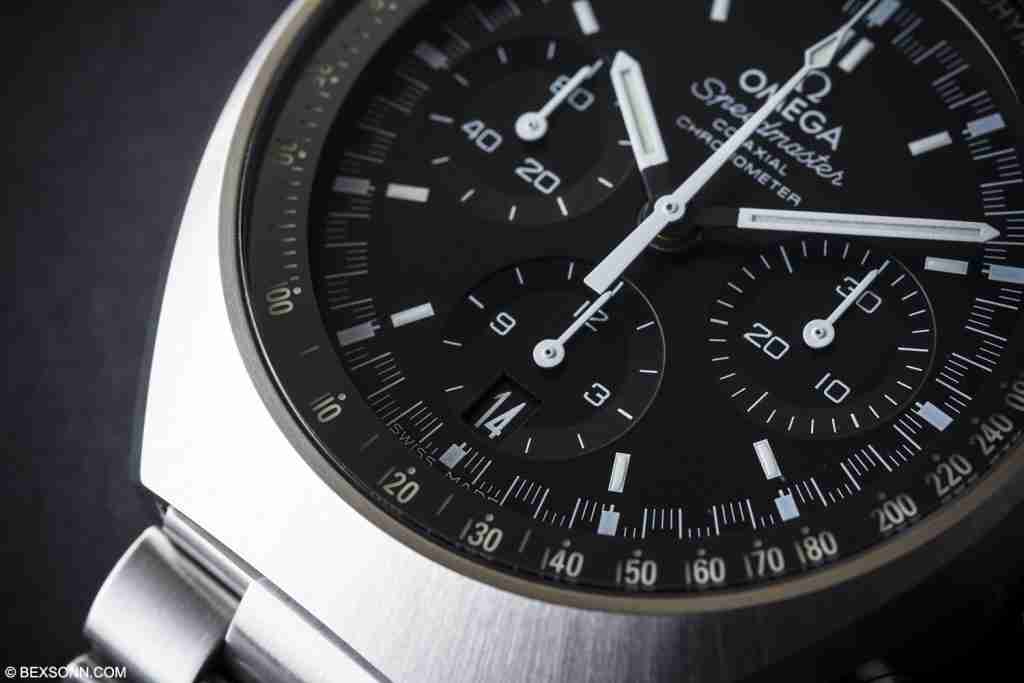 The hour and minutes hands used for all variants are styled on those from the racing dial version. Being a Co-Axial model it is nice to see that Omega have retained the triple sub dial layout, with running seconds at 9 o’clock, accumulated minutes at 3 o’clock and recorded hours down at 6 o’clock. The matte dial with circular graining on the subsidiary dials gives it a nice vintage look, perfectly balancing out the dials new additions. 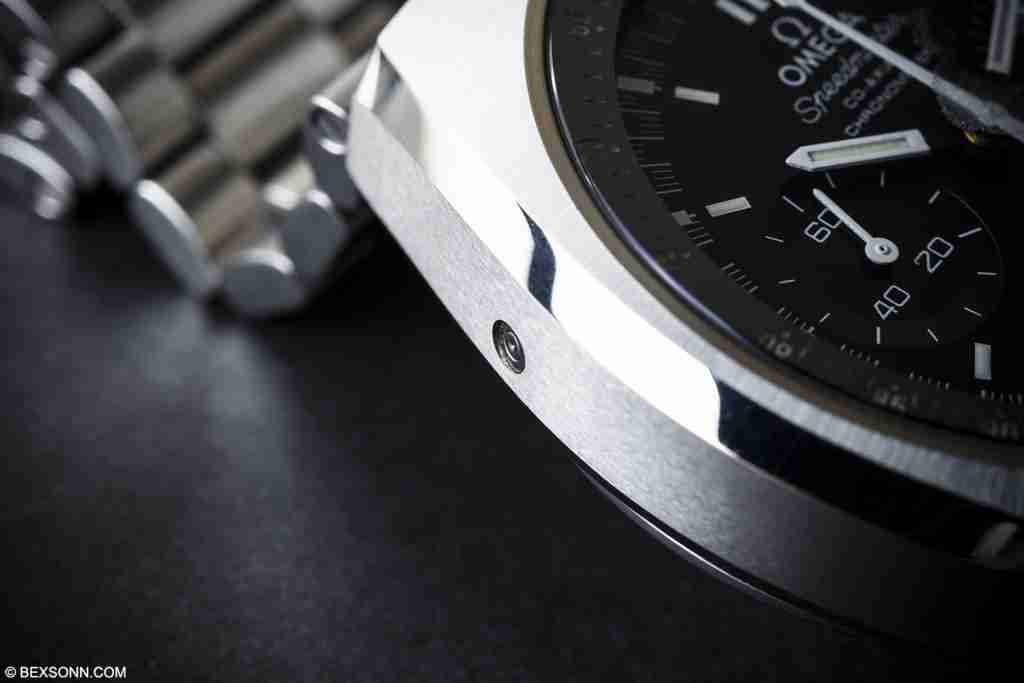 The stainless steel case of the Speedmaster Mark II Co-Axial also differs from the original. The new case measures 42.4mm x 46.2mm, while the vintage model measured 41.75 x 45mm making it a tad larger, though the size is the only thing which has changed. Covering the dial is flat, scratch-resistant sapphire crystal and like its predecessor, the tachymetre is on the inside of the of the crystal but has an added twist. The tachymetre bezel is actually luminous and therefore glows in low light situations. The transparent tachymetre scale on the sapphire crystal is in fact illuminated from beneath by an aluminium ring filled with Super-LumiNova. Though I remember thinking at the time why has this been incorporated into a Speedmaster, this is something that is better suited to the Seamaster range? The Speedmaster Mark II is water-resistant to a depth of 100m as opposed to the professional’s 50m, making it more of a diving companion. 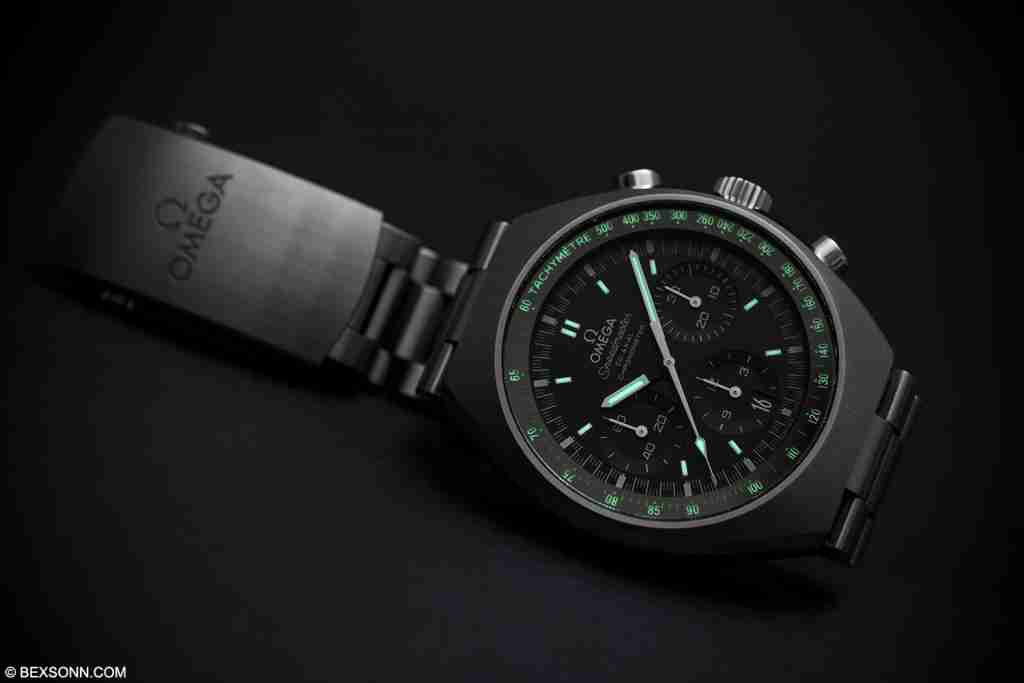 The case still sports the beautiful sunburst finish and brushed sides. On the side of the case at 10 o’clock is a recess pusher to adjust the date that is done so with the tool it is presented with. The bracelet is arguably one of Omega’s best at the moment and sports the new patented rack-and-pusher clasp. Omega have produced an easy-to-use, resizable clasp with 6 different positions. You will only need to open the clasp, press the ‘push’ button and slide the inner clasp to the desired fit. The case back is actually solid not affording any glimpses of the movement but does sport an embossed Seahorse, with an arched Speedmaster inscription. 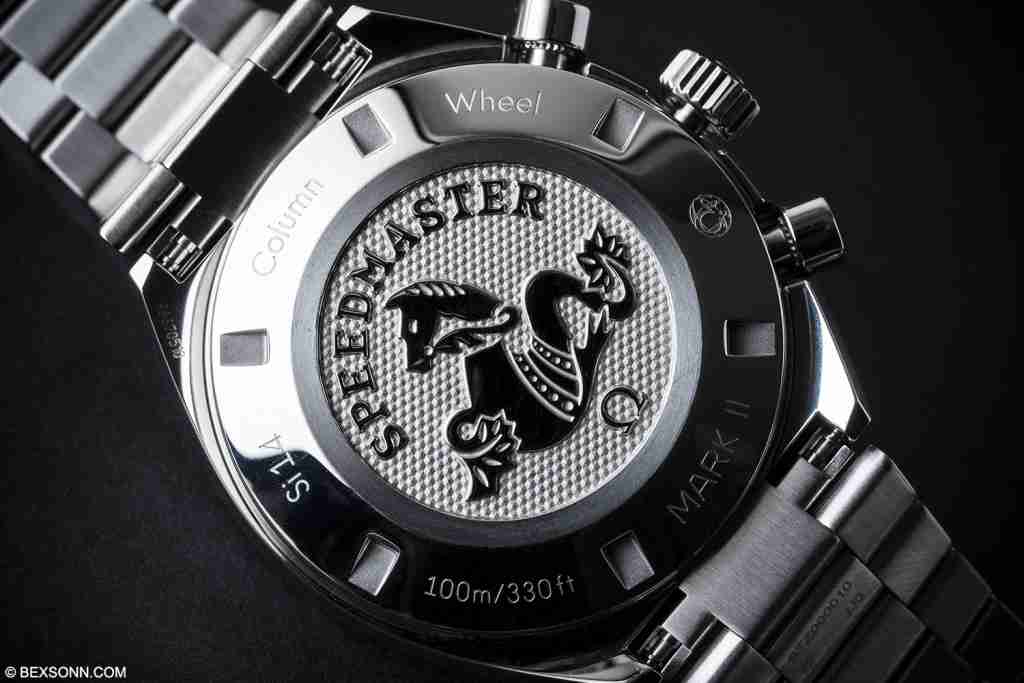 The Speedmaster Mark II houses the Co-Axial calibre 3330 and not the 9300 that we’ve become accustomed to seeing in the new Speedmaster range. The self-winding calibre 3330 makes use of a chronograph column wheel mechanism, a Co-Axial escapement, Omega’s Si14 silicon balance spring (non-magnetic so it is not influenced by magnetism) and will provide no less than 52 hours of power reserve. The mirror polished pushers, when actuated have a precise crispness about them and when reset the chronographs second-hand returns perfectly to zero every time. The two-chronograph control pushers function completely independently and there is no risk to the chronograph mechanism as a result of inadvertent manipulation.

The Speedmaster Mark II like the ’57 Co-Axial we looked at few months back will also divide opinions but I think with the Mark II it won’t be because of what’s already available, though more to do with what you can buy an original 145.014 for right now. But let’s look at what has been improved. There is the bracelet, which I for one think is more suited to not only this Mark II but it is also more in-fitting with the current Moonwatch on offer. Not to mention the useful clasp adjustment. There’s also the dial, which some may or may not agree with but hear me out. For me, the use of the racing style dial works better on the Mark II. Omega could’ve just done what they did with the original Mark II and utilise the same dial in the professional Moonwatch or for that matter the Co-Axial moon watches but they didn’t, they created something unique to the new Mark II. And then there’s the luminous tachymetre, while probably a little superfluous, adds another element to the Mark II and admittedly looks awesome in low light. 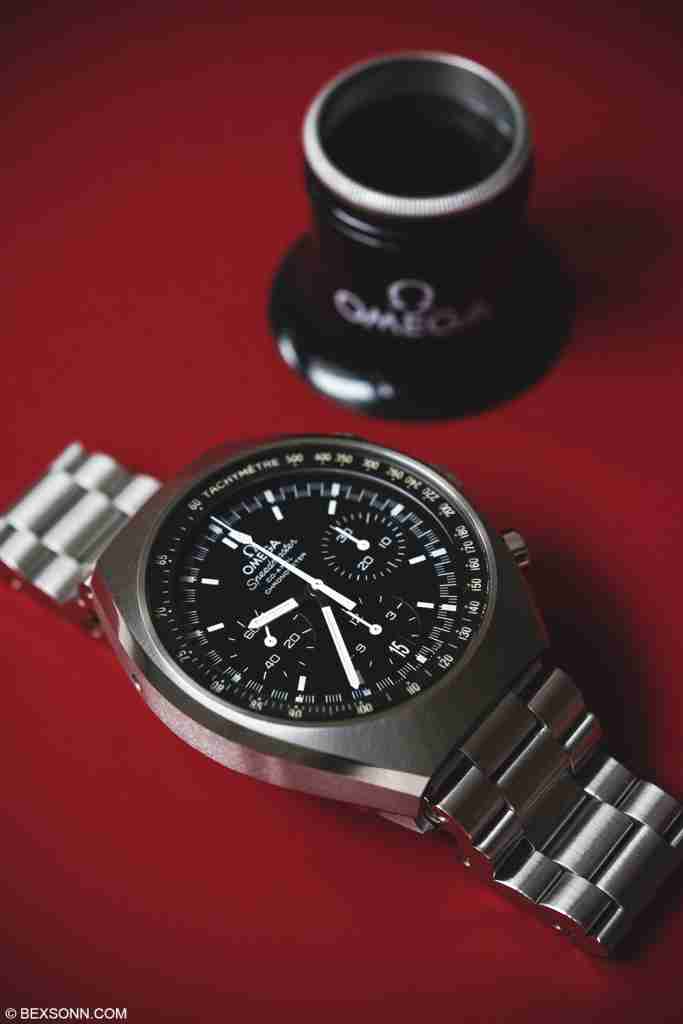 However, I think Speedmaster aficionados will look at the new Mark II and yet while they’ll appreciate it they may find the price a bit of a sticking point, considering you can buy a vintage model for less than £1,800. Some may also find the dimensions a bit on the large side, which I would be inclined to agree with but after a couple of days I soon got used to it and actually found the Mark II quite comfortable to wear. Though be aware, it does have some considerable heft to it. That said, I get it, it’s a timepiece that originally came from the 70s, its styling shows it and personally I like it. Some will wonder why Omega didn’t utilise the 9300 Co-Axial movement and in all honesty it is understandable – cost! The use of a 9300 Co-Axial in the Mark II would’ve put it in the same price range as the Moonwatch chronograph and that is not something Omega would’ve wanted to do with the Mark II, considering current original vintage prices.

Fellow watch blogging friend, Robert-Jan Broer and I came to the conclusion that the Mark II is for sure a timepiece created for those guys who loved the vintage Speedmaster Mark II on the wrists of their father or grandfather and wanted a similar timepiece with all the modern technology inside. But also the collector that likes the styling of the vintage Speedmaster Mark II but doesn’t actually want to own a vintage timepiece, which may sound a little strange but I know of a few watch collectors with this sentiment.

The Speedmaster Mark II is available in Stainless steel with three dial variations: black, grey/red/orange and of course the limited edition release for the 2016 Rio Olympics (limited to 2016). The stainless steel version with black dial that we managed to get our hands on has a price tag of £3,950. 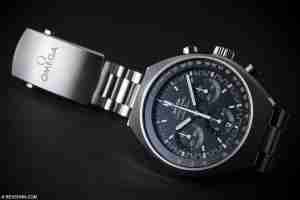 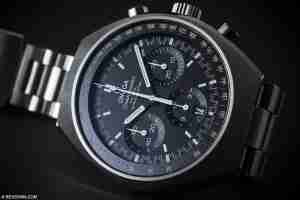 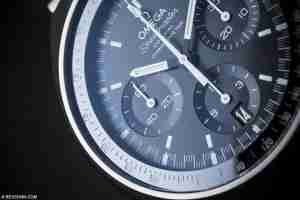 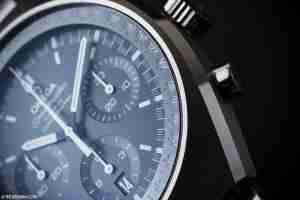 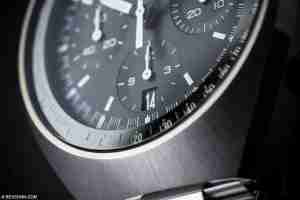 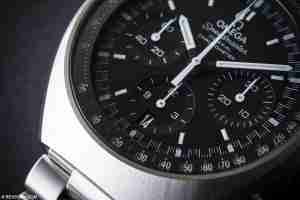 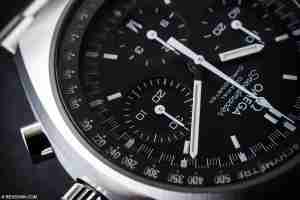 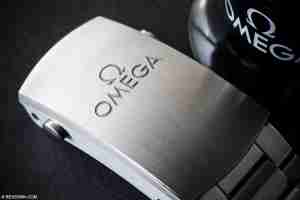 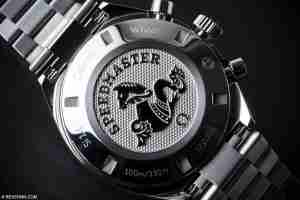 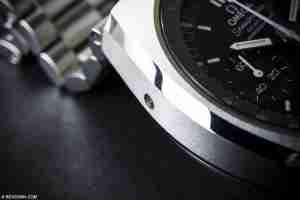 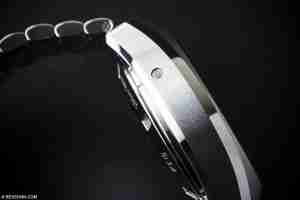 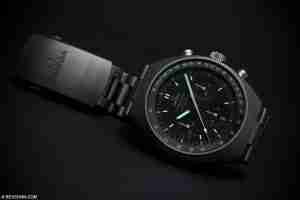 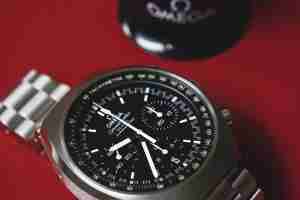 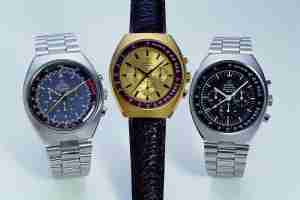 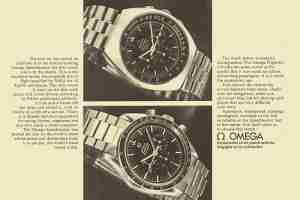