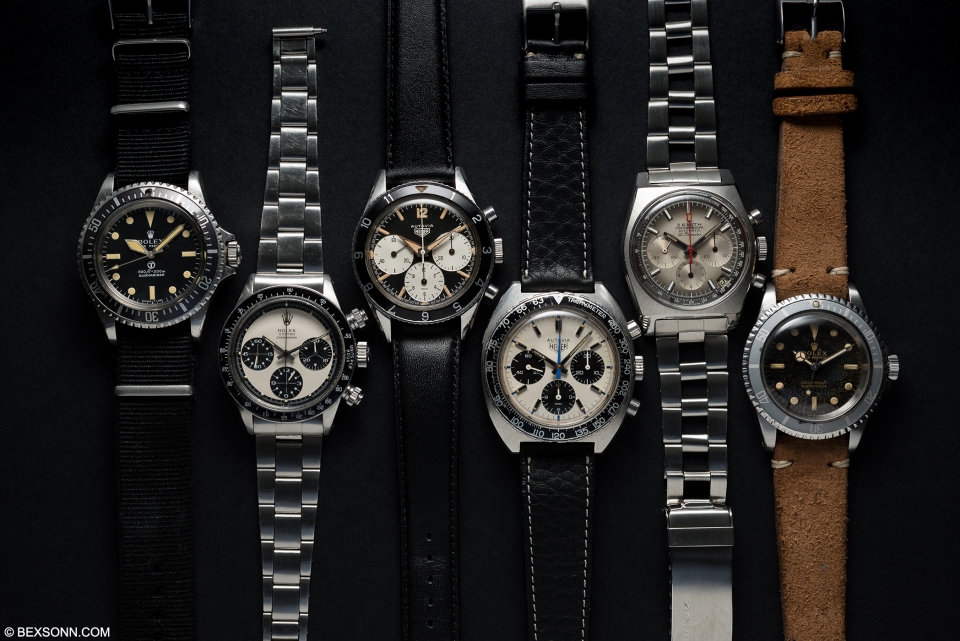 We are now just a little over half way through the year, which could only mean one thing: the summer Watches of Knightsbridge auction is upon us and my goodness they have some absolute gems in the auction line-up. Last week we spent some time over at 64 Knightsbridge to get hands-on with some of the timepieces in the upcoming July auction on the 2nd. As per usual we decided to pick out some of our highlighted lots and share our thoughts on them. 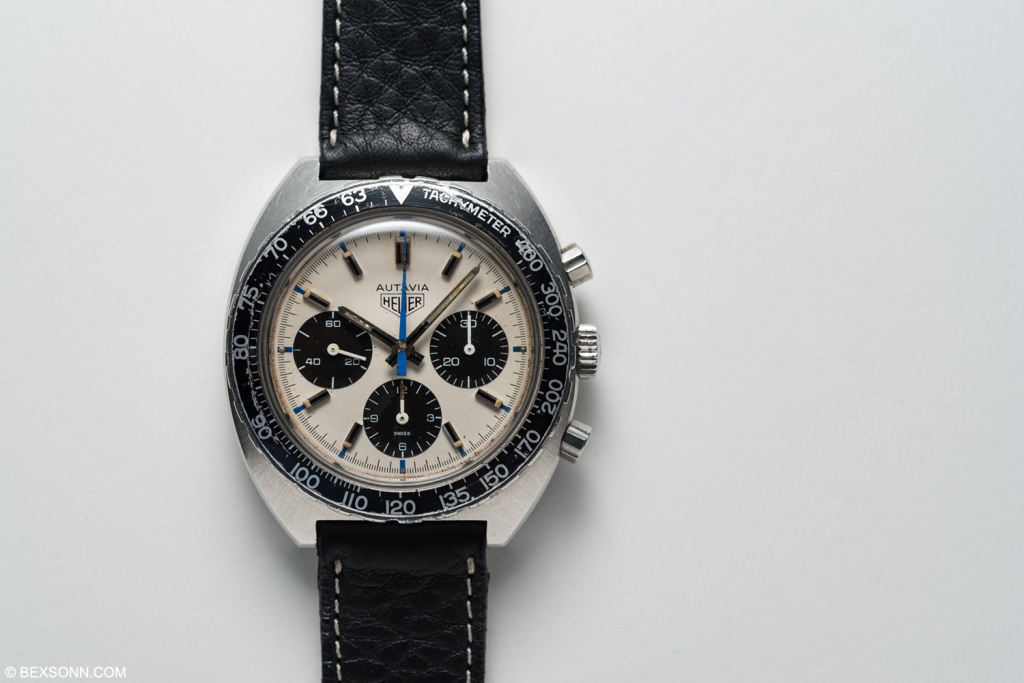 Lot 142: This reference is referred to as “Siffert Colours”, though the true Siffert was the automatic 1163T. This dial features some of the same details as the 3rd execution 1163T dial, having black stripe markers, matching black stripe steel hands. However, in my opinion this reference is more beautiful due to the always popular three contrasting chronograph subsidiary dials – referred to by collectors as Panda dials. This Autavia features part luminous black inlaid silver batons and hands, with a black outer minute track and blue hour markers as well. This contrasts well with the central chronograph seconds hand and three black subsidiary dials, of course recording, hours, minutes and continuous seconds. Inside the ref 73663, is the manual-wound calibre 7736. Being a 70s Autavia, it naturally features a 42mm tonneau shaped-case and this particular version features a tachymetric rotating bezel, and comes on a black leather strap. 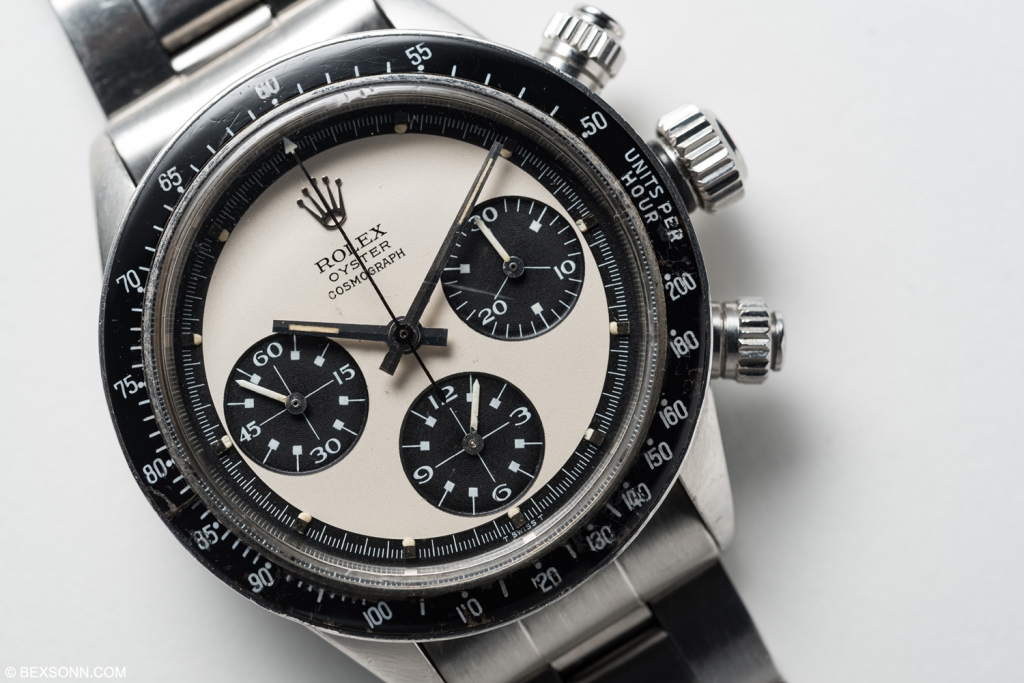 Lot 360: Now, this particular timepiece is somewhat special and when they come up for auction things tend to go a little crazy, depending on reference and dial combination. The ‘Exotic Dial’ aka ‘Paul Newman’ Daytonas are famous for one reason and one reason only. The man himself was pictured wearing one on the front of an Italian magazine. This Paul Newman Daytona 6263 could be considered more of a run-of-the-mill PN but that doesn’t make it any less sought-after. While there are rarer tri-colour 6263 dials that exist this particular Paul Newman Daytona features a two-tone white and black dial with luminous, raised silver hour markers and three engine-turned registers, recording hours, minutes and continuous seconds – again, also reffered to as ‘Panda dials’. Inside is the 17 jeweled manual wind 727 movement, signed Montres Rolex S.A. The case measures 36.5mm in diameter and features screw-down style chronograph pushers with a fragile bakelite bezel, on a Rolex oyster bracelet. 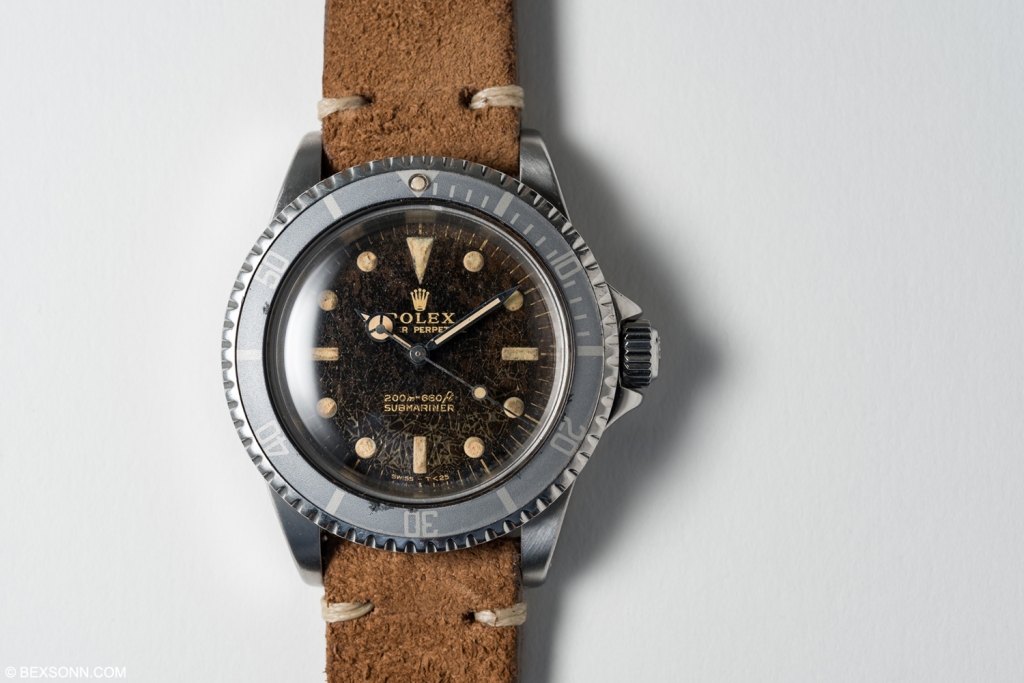 Lot 365: There is no denying that the Submariner is the ultimate tool watch and we have highlighted quite a few variations here. But there’s nothing quite like showing our readers a 5513, that will always split people’s opinions, which possess a few sought after details that make collecting Rolex timepieces so intriguing. I’m always told it’s the finer details that make Rolex timepieces interesting and this one has a gilt gloss dial, that has aged to a point where the dial has become “Tropical” or for lack of a better word, discoloured, to a point where it has become almost marble-like. Then there is the bezel, which has also faded to a point that is referred to by collectors as a “Ghost bezel”, while these traits logically may not make any sense to the unseasoned collector, it is details like this that make vintage watch collecting, and in particular Rolex, very intriguing. Also, beating away at the heart of this 5513 is the 26-jewelled calibre 1530 movement signed Rolex SA and dated II.65 (2nd quarter of 1965). The Oyster case measures approximately 40mm, which appears to be in good condition and comes on a JPM brown suede strap. 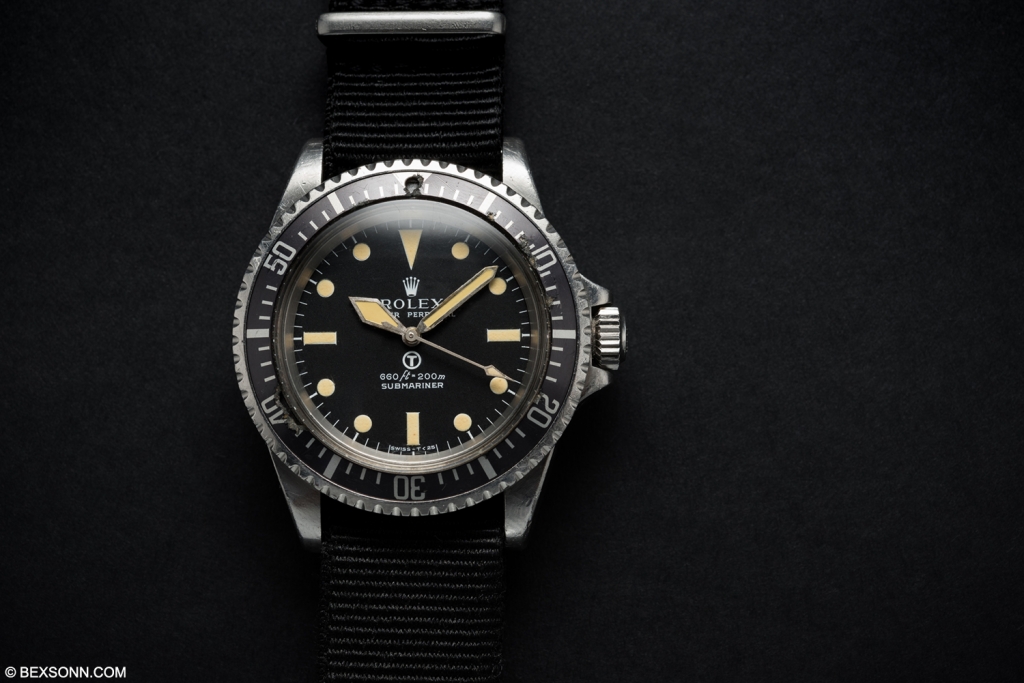 Lot 368: We’ve highlighted many Submariners before but we’ve yet to highlight, arguably, one of the most desirable watches that bears the Submariner name: The Rolex Military Submariner. It is perhaps one of the most attractive military watches ever made and if you were unaware, the majority of them were supplied to the British MoD (Ministry of Defence), with very few issued to other forces via the British Government. This particular example was indeed issued to the British military in April 1972 and comes accompanied with a letter signed by Hudson (general manager of Rolex UK) confirming this information. However, this MilSub features ‘mixed numbers’ where the case serial date differs from that of the case back date, which is not uncommon in the military watch scene, as these were often mismatched during service by the MoD – hence the low estimate. The MilSub differs from the regular Sub, so it features a matte black dial with applied luminous markers and a circled ‘T’, denoting its military significance. It sports inlaid luminous military sword shaped hands and fully demarcated to 60 minutes (instead of just 15) bezel insert, which bears some battle scars and is void of a pearl. The case is identical in size to a civilian Sub but features fixed lugs and the case back is engraved with military markings. 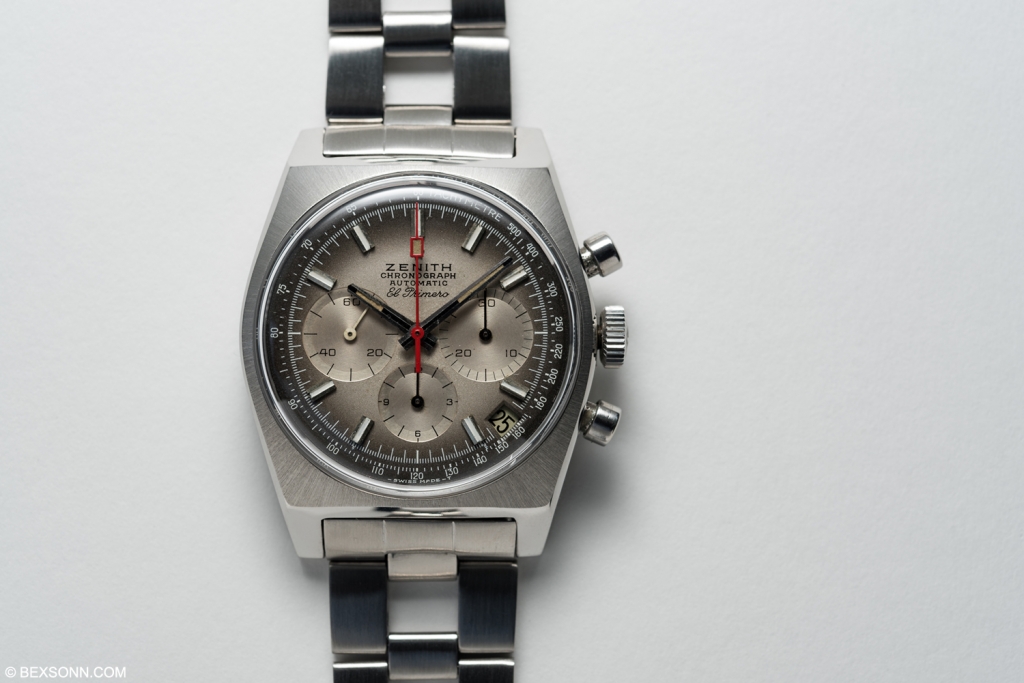 Lot 526: The El Primero is a legend within its own right but there is a much debated story behind it. During the early 1960s there was a race on to see who could create the world’s first self-winding (automatic) chronograph. There were of course a few companies that shared an interest in claiming this technological breakthrough: Heuer/Buren-Hamilton/Breitling. However, there were a couple of silent watch manufactures working on this advance too: in the Far East was Seiko, who were busy working on their own version and then there was the company from Le Locle – Zenith! While there is a debate on who was first, there’s no doubt that Zenith were first to announce the El Primero, with three different references. The A384, the A386 and of course this model, the A385. This A385, in contrast to the A386, features a tonneau shaped case but comes on the all-important, original, Gay Frères ladder bracelet. The dial sports a smoked grey finish, with inlaid silver batons, and three silver registers, recording minutes, hours and continuous seconds. 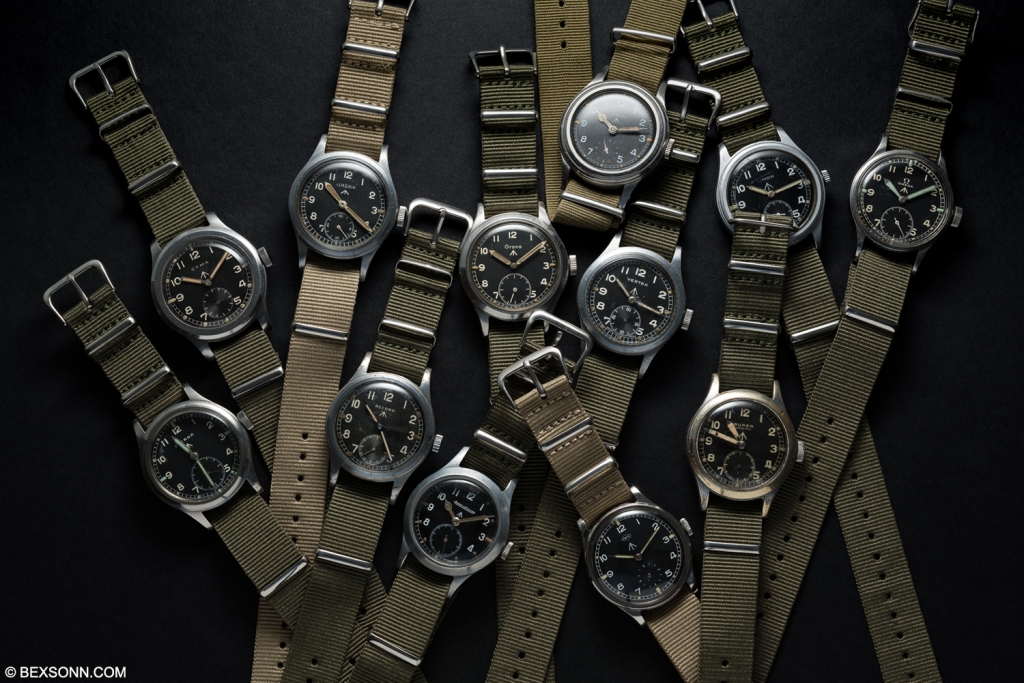 While this is not a lot pick per se, it is worth mentioning. In this coming Watches of Knightsbridge auction, there is a full-set of the dirty dozen up for sale, albeit, individually. But just what is the dirty dozen? In the 1940s, during World War II, the British Ministry of Defence, required wristwatches to issue to army personnel, as civilian timepieces just weren’t adequate. So, the MoD invited any Swiss watch manufacturer to build a wristwatch to specific MoD standards.

Twelve manufacturers were eventually chosen to fulfil this request from the MoD, that matched up to the required standards, resulting in the nickname ‘The Dirsty Dozen’. These consisted of watches from: Buren, Cyma, Eterna, Grana, Jaeger Le-Coultre, Lemania, Longines, IWC, Omega, Record, Timor and Vertex. By 1945, these timepieces were all delivered to the MoD and were accompanied with pigskin or canvas straps to fit on the wrist, as of course G10 NATO straps didn’t exist until the 70s.

What the MoD specified, was precisely what you’d expect a military watch to be – water-resistant, luminous, regulated to chronometer level and cased in something that could cope with the rigors of war: stainless steel. The dial needed to be black, with Arabic numerals and subsidiary seconds, to maximise legibility. The case back had to include the W.W.W (Watch.Wrist.Waterproof) designation, to distinguish the watch from civilian made pieces and include a broad arrow, which is the traditional marking for Crown property marking, with the dial only displaying the broad arrow. Needless to say, vintage military watches are well sought-after and having a full-set of the dirty dozen can often takes years to accumulate. That said, Watches of Knightsbridge have the lot up for sale this weekend.

The Watches of Knightsbridge auction will take place on the 2nd July 2016, make sure you visit the official website for the full catalogue.

You can also read our in-depth article on the first execution Heuer Autavia reference 2446 M right here, which is also up for auction this weekend at Watches of Knightsbridge