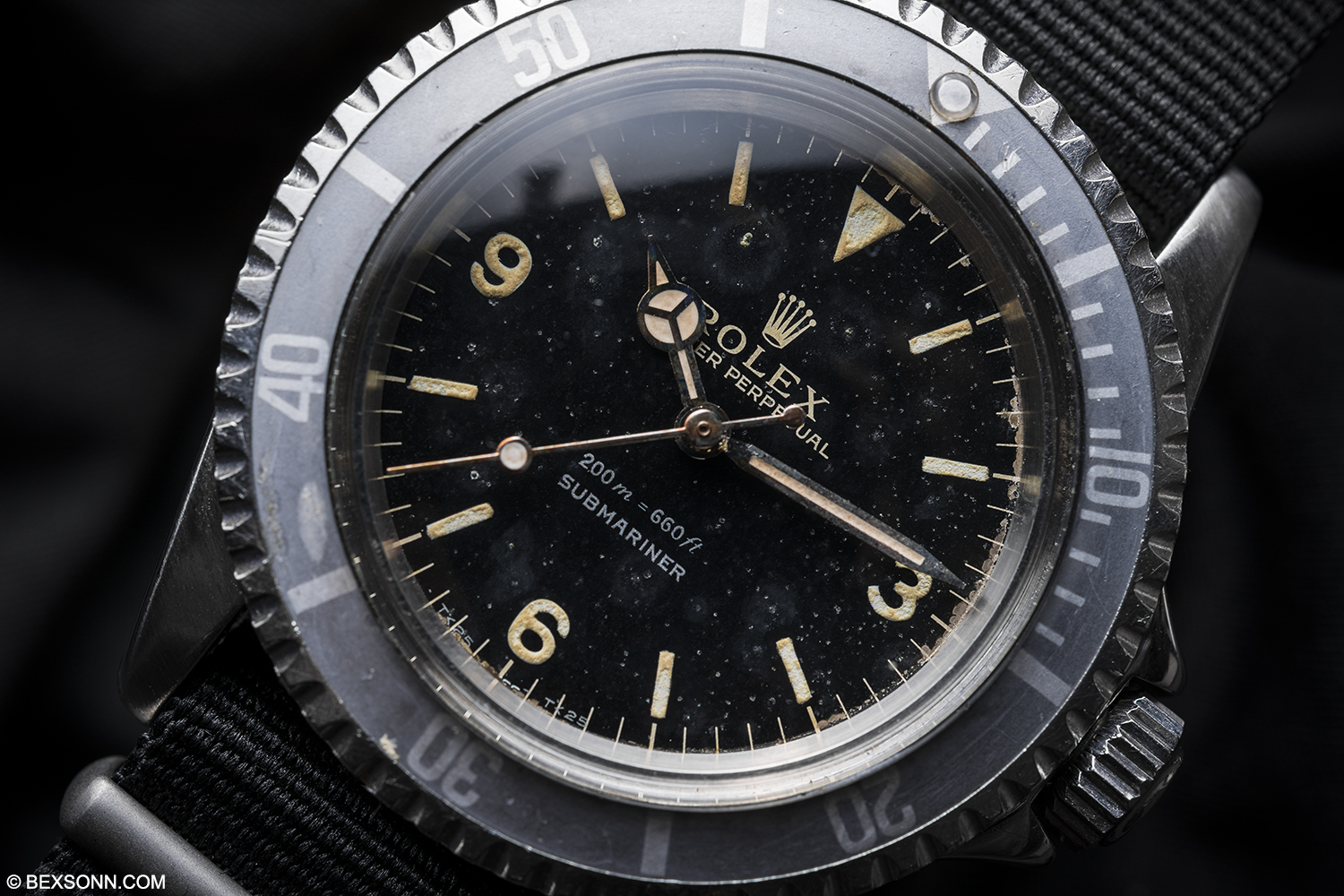 Over the weekend we spent some time with our friends over at 64 Knightsbridge to get hands-on with some of the timepieces in the upcoming November auction on the 22nd. While there were a few pieces that caught our eyes, we’ve picked just a handful of timepieces that really stood out for us. These selected timepieces consisted of; an extremely rare Omega Speedmaster, a rare gold Rolex Daytona, an even rarer Rolex Submariner, a must have Rolex GMT-Master and a lovely little Universal Geneve Tri-Compax.

Lot 266: We’ve looked at Speedmasters from Watches of Knightsbridge auctions before but this one is just a little bit special. Until this point I’d never seen or heard of a Speedmaster with a sunburst blue dial, though I’ve seen my fair share of discoloured brown dial Speedmasters. For me, this is a first and it would seem these pieces are extremely rare – though its true origins are quite unclear. I’ve even spoken to a few people who believe it’s a discoloured dial but clearly this just isn’t possible, seeing as it is a sunburst dial. According to my current Omega Speedmaster bible (Moonwatch Only) this is actually a series of different coloured dials made by Omega and is classed as a dial projects in special colours though the status of these rare dials are not yet fully known. 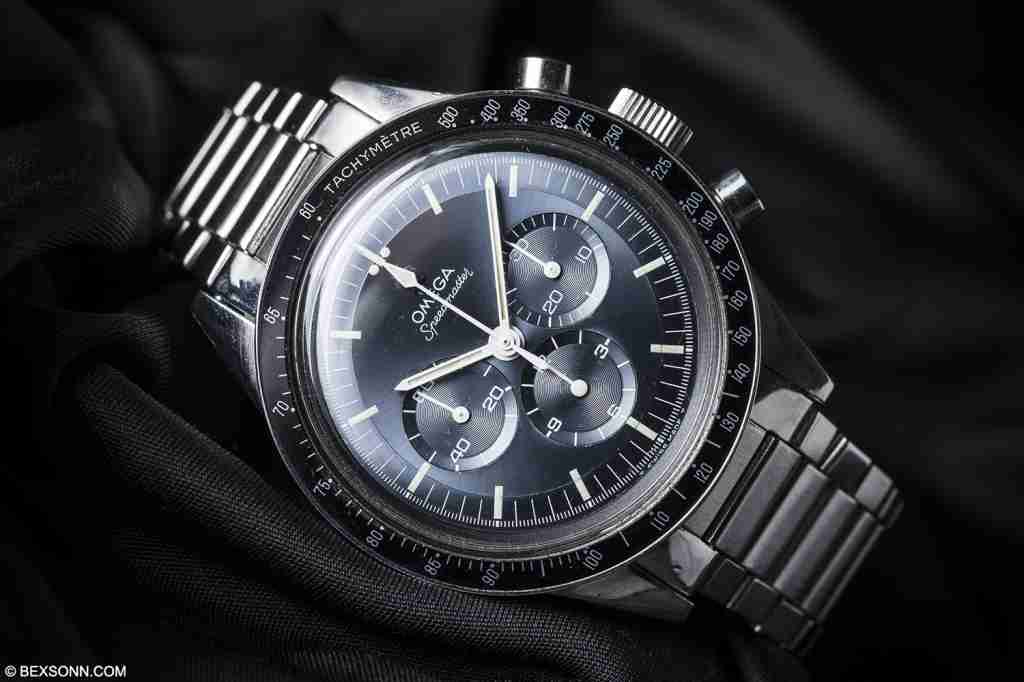 This 1964 Speedmaster ref 105.003-64 features as mentioned a grey-blue sunburst dial with applied luminous markers, applied Omega logo, triple sub dial registers recording hour, minutes and continuous seconds, with central chronograph seconds and a step dial. Inside is the infamous caliber 321 and it comes on an expandable Omega flat link bracelet which is numbered and dated. The only remark I would make is that the tachymeter bezel has been replaced. This extremely rare Omega Speedmaster is up for auction at an estimated price of £5,000 – £7,000.

Lot 367: Next up is a Daytona we’ve never really featured on here but this is the first of the automatic Daytonas that ushered in a new era in the life of the “Zenith” Daytona. Not only that, it also features what is referred to as a “floating dial”, what does this mean? If you look closely at the dial you’ll see that the wording of ‘COSMOGRAPH’ sits an extra line below the COSC inscription. While this is a mundane detail, it is details like these that make the most collected Rolex just that little bit extra special now and for the foreseeable future. 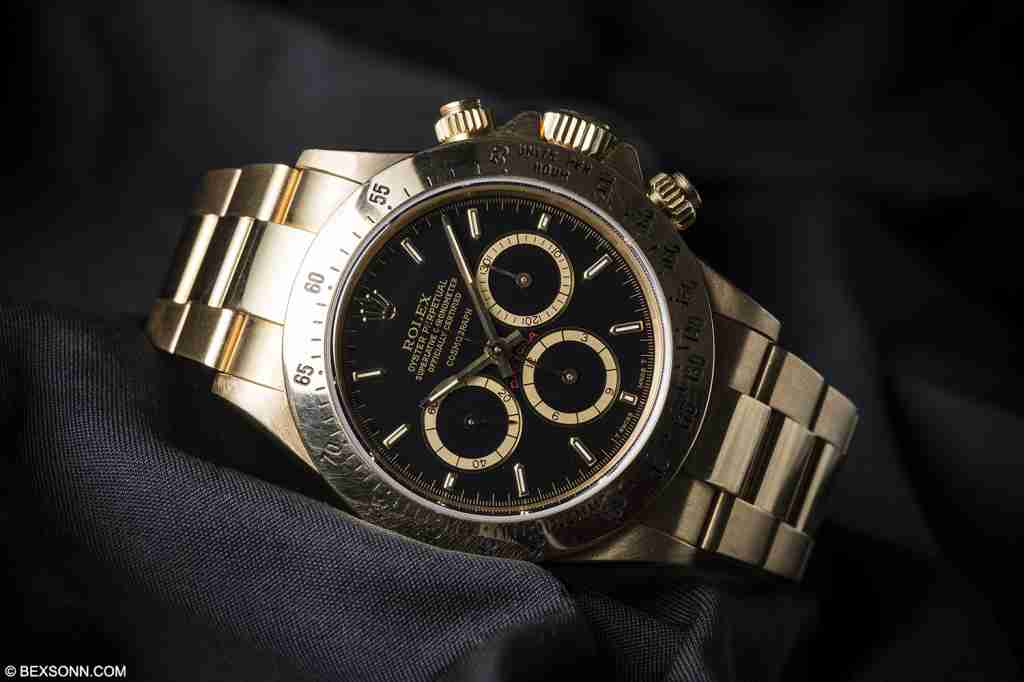 This 1989 Rolex Daytona reference 16528 features a black ‘floating’ dial with luminous inlaid gold batons, with gilt font and tracking. Triple subsidiary dial registers with gilt rings, recording minutes, hours and continuous seconds, with central chronograph seconds. Ticking away inside is the 31-jewelled automatic chronograph movement based on the Zenith El Primero calibre 4030. The 18-carat solid gold Oyster case measures approximately 39mm and is presented on its original 18-carat solid gold oyster bracelet. This Daytona is up for auction at an estimated price of £16,500 – £18,500. 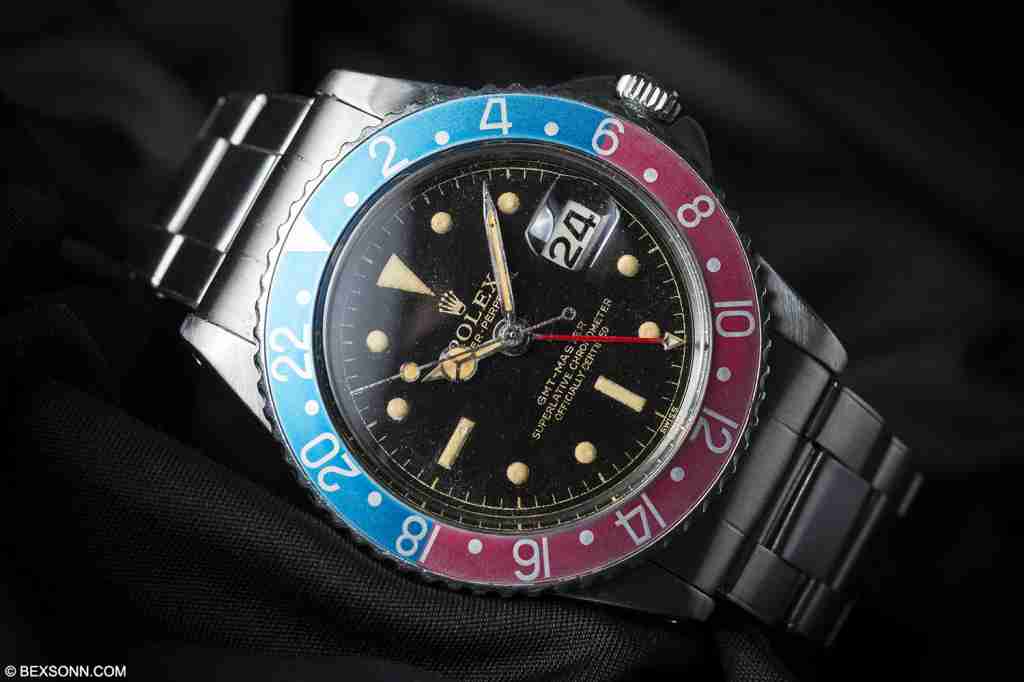 Lot 371: Another iconic Rolex, the GMT-Master but this one is just that extra special. It has all the little details, in my opinion, that make this piece very much sought after in the world of Rolex collectors. Though not as rare as a GMT-Master 6542, this 1675 has some serious character. First off it features a black gloss gilt dial, with chapter ring and small 24-hour arrow hand. Not to mention the pointed crown guards and a rivet bracelet. Being a lover of the Speedmaster and the GMT-Master, it was quite nice to recently learn that although astronauts wore Speedmasters into outer space, back here on earth for many of them their real watch of choice was the GMT-Master. 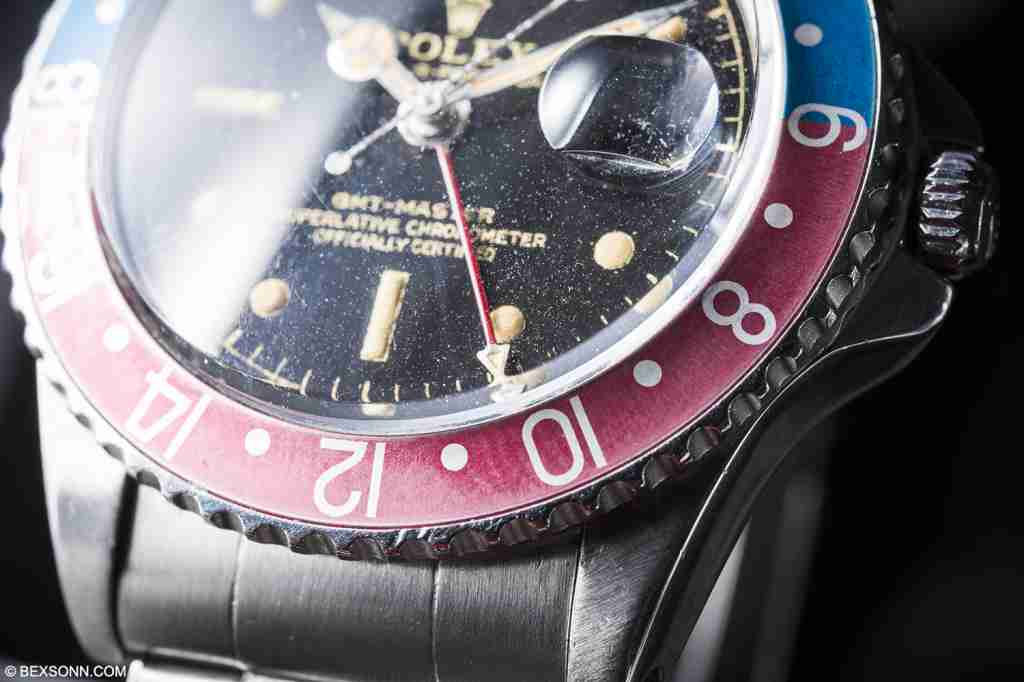 This circa 1960 Rolex GMT-Master reference 1675 features a black gloss dial with gilt chapter ring and font, and luminous markers. As mentioned above it also features a small arrow GMT hand. Inside is the automatic calibre 1560 with butterfly rotor signed Rolex S.A. and date I.60 (first quarter of 1960). The Oyster case measures approximately 40mm with its signature 24-hour “Pepsi” rotating bezel and comes on a riveted bracelet. This GMT-Master ref. 1675 is up for auction at an estimated price of £6,500 – £7,500. 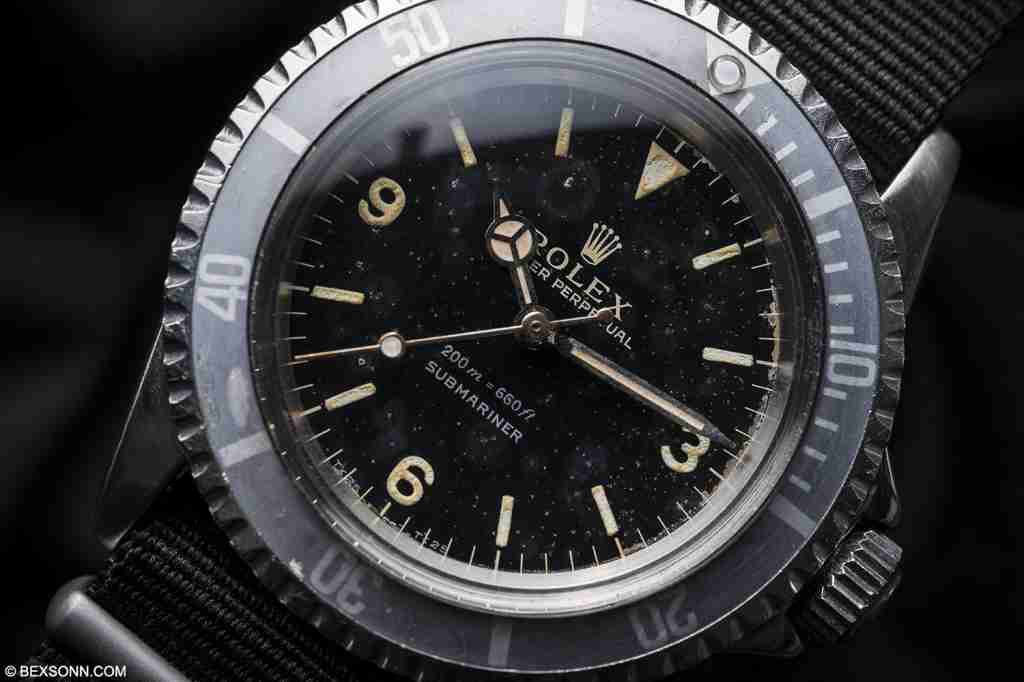 Lot 376: There is no denying that the Submariner is the ultimate tool watch and while we’ve looked at quite a few there are some varying combinations and this particular variation is one of the most coveted by collectors and Rolex aficionados. You see, this Submariner 5513 features what is known as the 3-6-9 dial, which was one of the options given to the original purchaser of a Submariner when ordering. These dials are also referred to as Explorer-style dials for obvious reasons. But while these 3-6-9 dials are rare there is an even rarer variation out there – the underline 3-6-9, though these are extremely expensive. 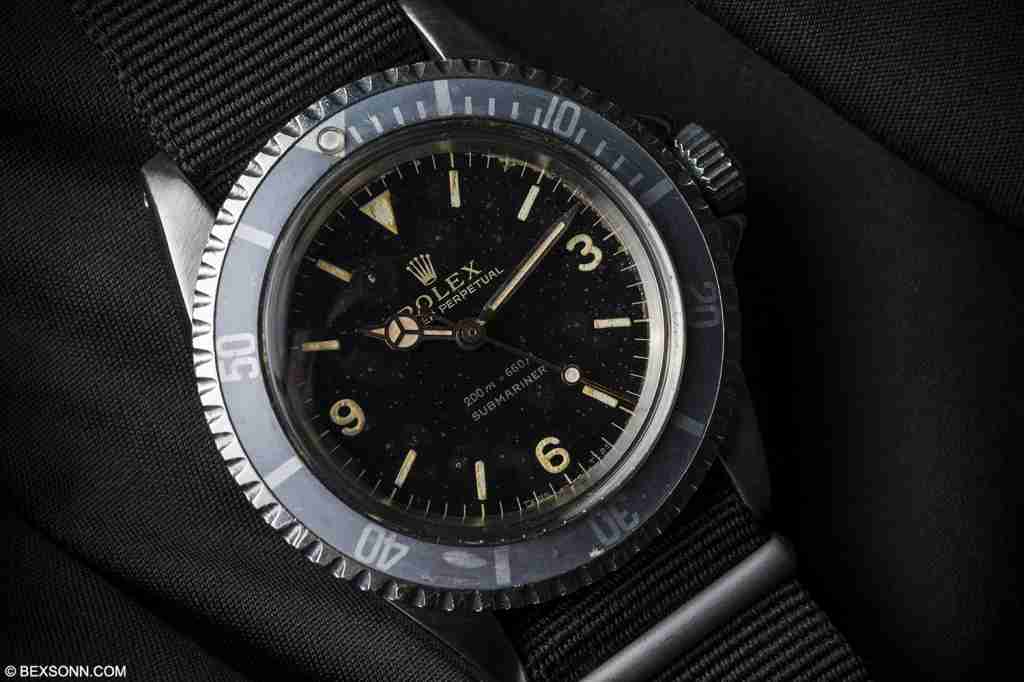 This Submariner 3-6-9 dial 5513 features a black gloss dial with applied luminous markers and of course Arabic 3-6-9, with gilt font and tracking. Inside is the 26 jewelled calibre 1530 movement signed Rolex SA and dated III.64 (3rd quarter of 1964). The Oyster case measures approximately 40mm and features a well weathered 60 minute rotating bezel insert. It is featured on a black NATO strap, which in my opinion is in fitting with the Submariner. This Rolex Submariner 5513 is up for auction at an estimated price of £40,000 – £60,000

Lot 503: Last but certainly not least is this Universal Geneve Tri-Compax that features Moon Phase, Triple Calendar function and Chronograph hence the use of tri-compax, which signifies it utilises three complications. This is sometimes misunderstood and thought to have referred to its three subsidiary dial layout. I just love these little moon phase tri-compax chronographs and we looked at one last time here but I guess you could say this is its sportier relative. 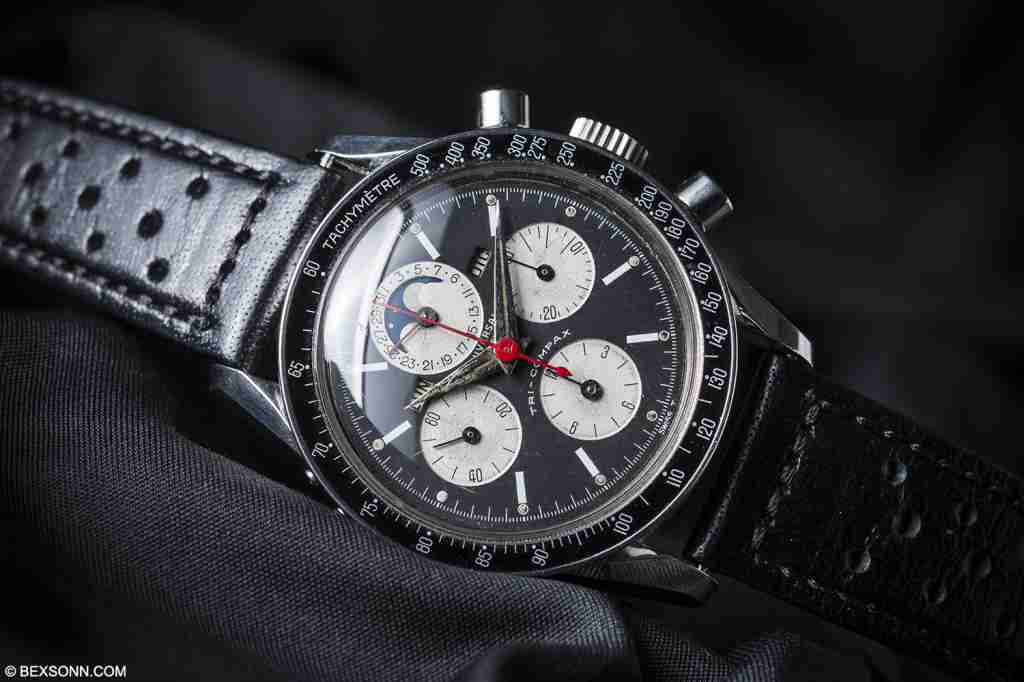 This circa 1969 UG Tri-Compax reference 881101/04 has a matte black dial with applied hour markers and 4 silver engine-turned sub dials recording hours, minutes, continuous seconds and a date calendar with moon phase display, as well as day and month apertures at 10 and 2 o’clock respectively. At the heart of this little gem is the 17 jewelled calibre 281 movement signed Universal Geneve and numbered. The 36mm case features twisted “bombe” style lugs, not too dissimilar to the Professional Speedmaster and just like the Speedmaster also features a black tachymeter bezel. This Universal Geneve Tri-Compax is up for auction at an estimated price of £3,500 – £4,500

The Watches of Knightsbridge auction will take place on the 22nd November 2014, make sure you visit the official website for this month’s full catalogue. 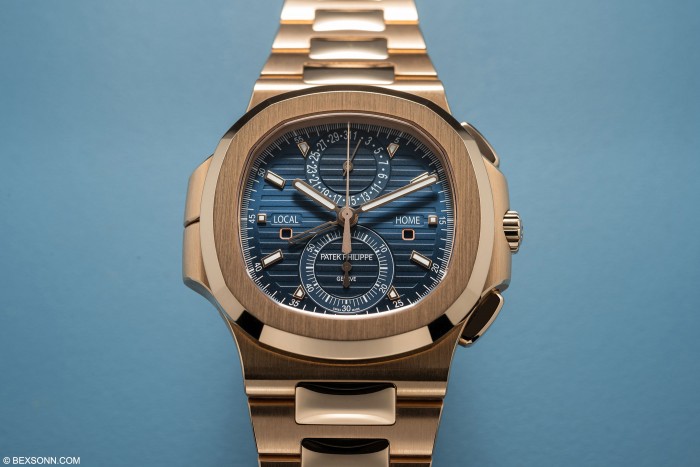