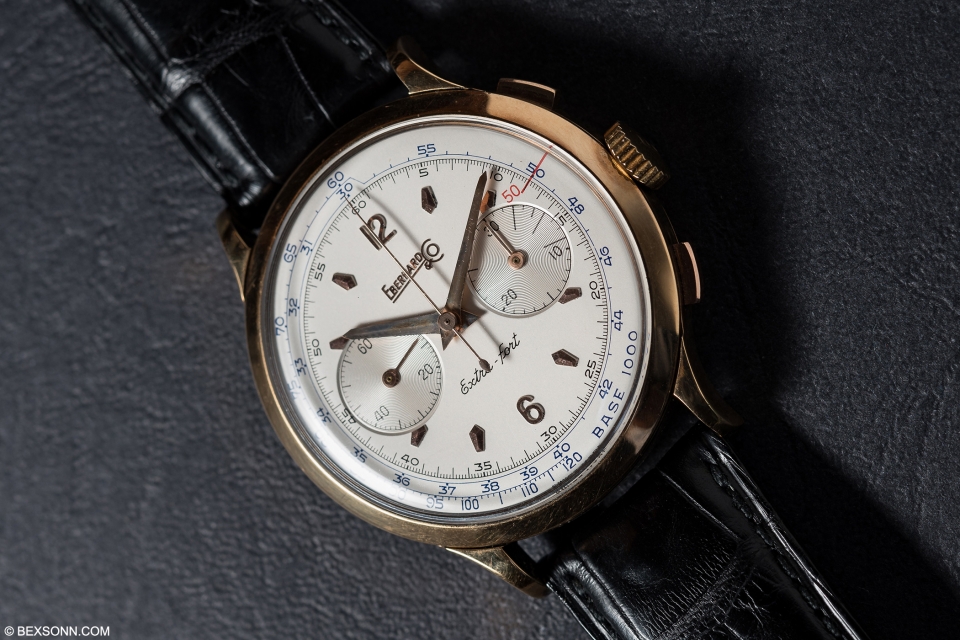 Going to Baselworld every year has become a ritual and like all rituals at some point, it’s almost like you switch to auto pilot as it’s something you’ve become so used to doing. Like most who make the pilgrimage to Basel, a lot of your time is taken up going from one meeting to the next, with little time in between to take a breather. This year, however, was a bit different for me. You see, most of the time I go to Basel I end up doing the same thing, scarcely leaving the Baselworld compound and even when I do have a bit of time, I end up in the press centre taping away at my keyboard, almost through sheer guilt that I’m not doing anything. This year, I thought I’d potter around outside the Baselworld doors and on the streets of the city of Basel during some of my spare time. It would seem this wasn’t a bad idea at all. 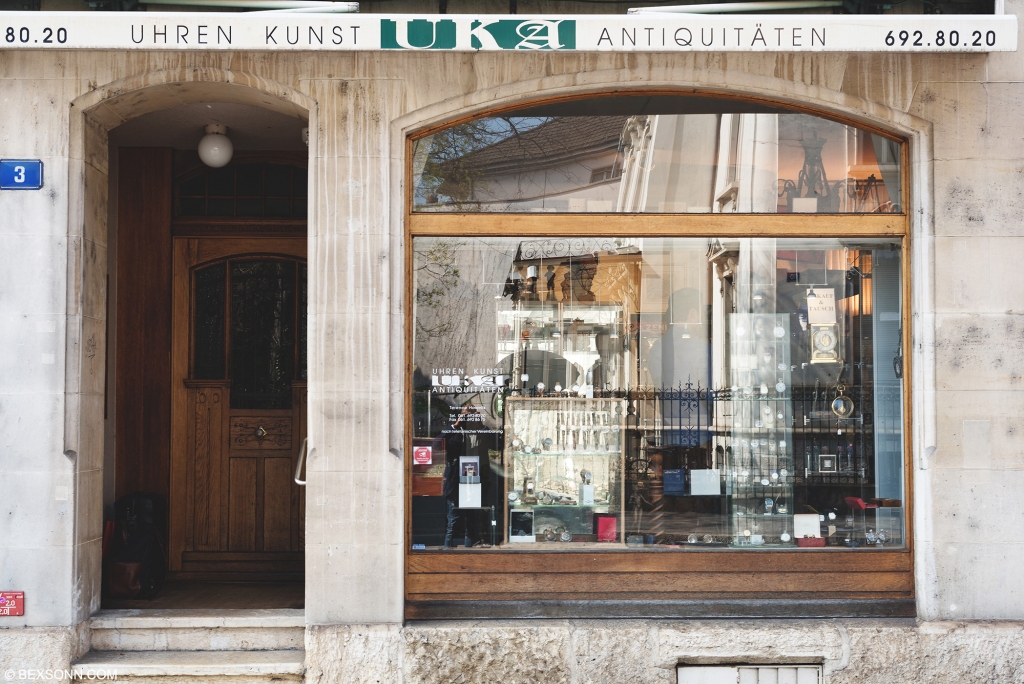 Airbnb has become a popular way of acquiring accommodation while in Basel and of course the wider world. For the first two days, during my stay it would appear I’d been taking the wrong turn and I’ll tell you why. I was on auto-pilot, and just followed the direction Google Maps told me was the quickest route to walk to Messe Platz but by day three that all changed, the blinkers were off. My very first meeting on day three didn’t take place until after lunch, so I thought I’d get a lie-in and then take a nice casual stroll towards the exhibition centre, so instead of coming out of my apartment and turning right, I went left. It would appear this whole time I was missing out on a vintage watch shop situated just below my apartment by taking the shortest route. Almost brings back memories of when I lived in Greece, pre-2000’s when all those things didn’t exist, and you just went in the direction that felt right. I digress. 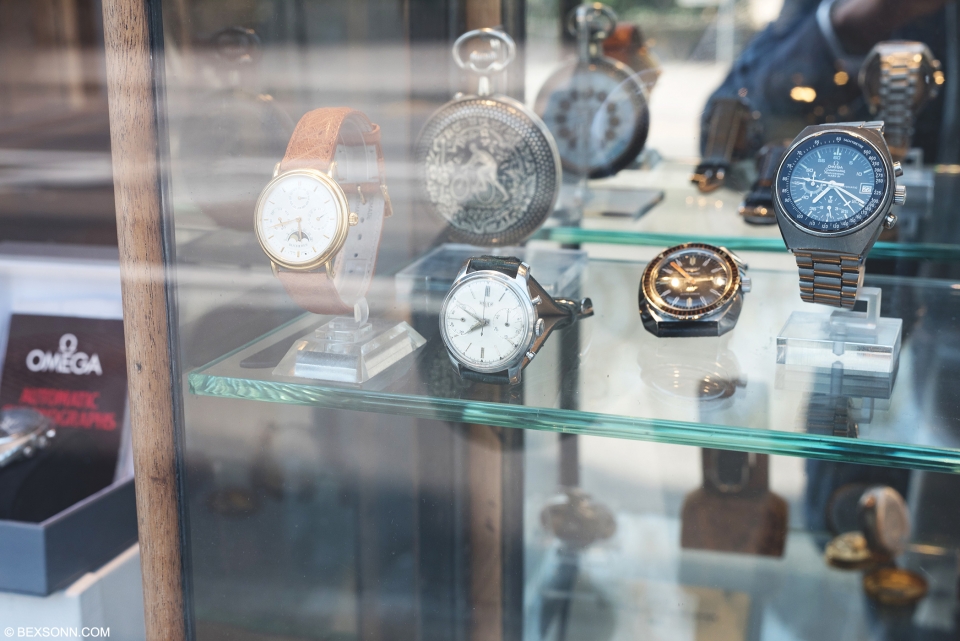 So, I peered into the window to see what was on offer and admittedly there were some interesting timepieces on show, and when I say timepieces… I mean timepieces. You see, this wasn’t your ordinary vintage watch shop but more of a hoard of vintage things, with wristwatches perhaps taking centre stage. With such an inviting window, it would of course have been rude not to drop in and say hello, so I did but I think what came next wasn’t something I’d expected. When I entered the shop, there stood two tall, thin, gentlemen having a discussion in German about a watch – my first thoughts were, “let’s hope one of them speaks English.” Luckily enough, one of them did, in fact his English was perfect and it even had a northern accent to it. Naturally I introduced myself as did he but it turned out he was the owner of the shop and hails from Coventry U.K. and has lived in Switzerland the past 20 something years, buying and selling vintage watches from all over the world. 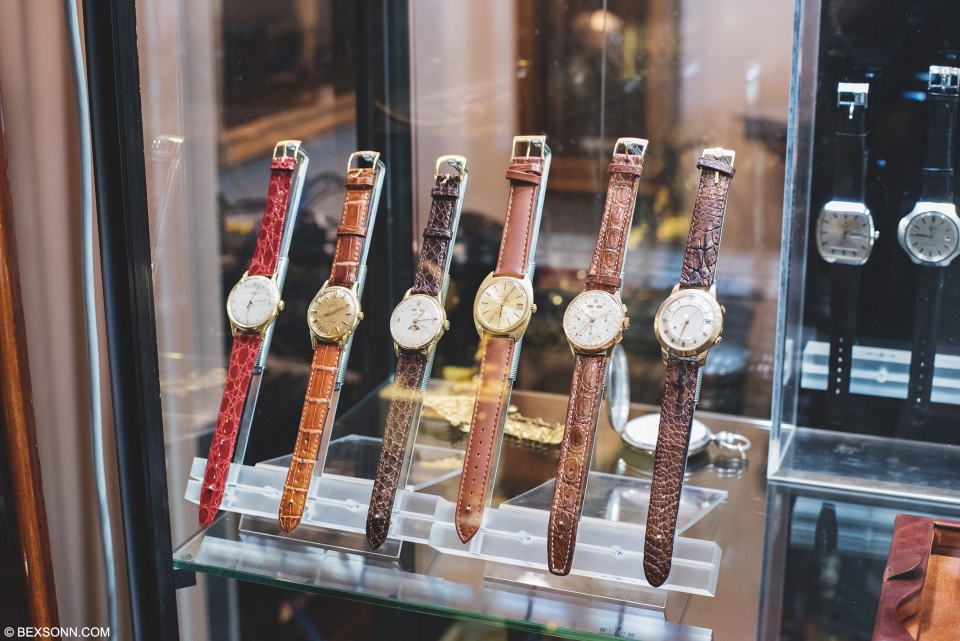 Speaking to Terrence Howells, who had the look and charm of a well-travelled man, I quickly understood that his journey to becoming a vintage watch dealer happened by pure chance. Interestingly enough the shop was also filled with vintage instruments, which all became apparent when Terrence told me that his first profession was being a musician, playing the piano & keyboards for some 17 years, before to getting into watches. Touring the world, he told me that when he came to Switzerland, he decided to settle here for the foreseeable future and this is where he wanted to be as he’d done enough travelling. In doing so, he soon took over ownership of an antique shop and started selling old English antiques, of which included old watches and clocks.

As mentioned Terrence’s shop is filled with old instruments and antiques from a bygone era but without doubt, the most prominent pieces of old vintage goods are wristwatches. Terrence also explained that “after a couple of years of still dealing in English antiques, in my current shop here in Basel, I decided to fully concentrate on just wristwatches – though I still sell the odd antique here and there but much less than before.” It would have been rude of us not to share with you some of the images we took of a handful of the watches we snapped while there. 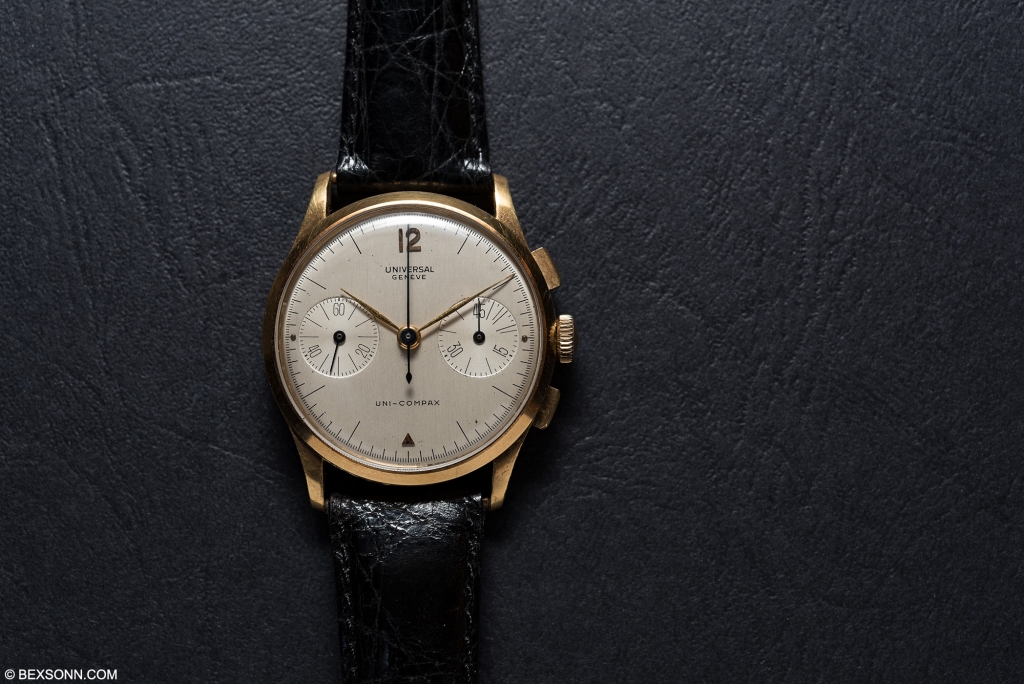 There is no doubt that Universal Geneve are perhaps more well-known for their complicated chronographs, which over the years have seen not only a huge rise in their popularity but also in their value. That said, UG also maintained – let’s say – a much simpler range of chronographs under the moniker of Uni-Compax. The Uni-Compax was designed to be a precision watch with hour, minute and seconds hands indicating the exact time of day and on top of this, a chronograph with a very simple start-stop-reset function. The main use of the Uni-Compax was to allow the wearer to record durations such as, half-times of football matches, races and of course recording the time taken to cover a certain distance. 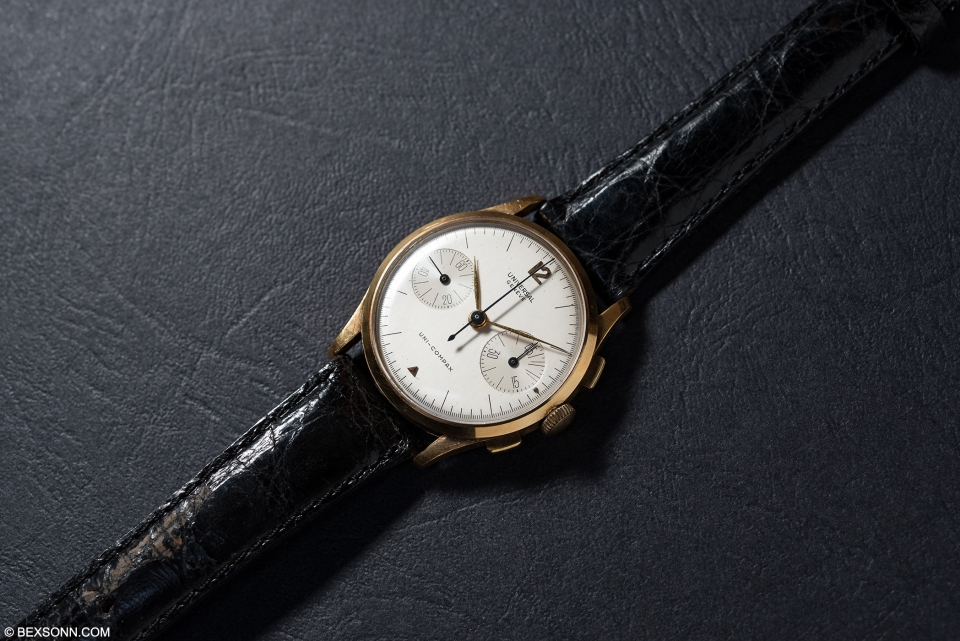 Launched in the mid-1930s, replacing the Compur, the Uni-Compax was offered with a two-register layout, which included a 45-minute counter, came with a variation of different cases, dial and hand combinations. This ref. 12245/2 sports a rather unusual dial, with beautiful elongate sub dial numerals and just the applied Arabic numeral at 12. Most Uni-Compax’s around this time either featured numerals from 12 – 6 or just at 12 and 6, and usually had some sort of measurement scale too. The silver dial on this UG is rather sparse but it is so well-balanced. While we didn’t pop it open, it likely houses the very desirable calibre 285. Just a beautiful example of a classic chronograph from 60’s. 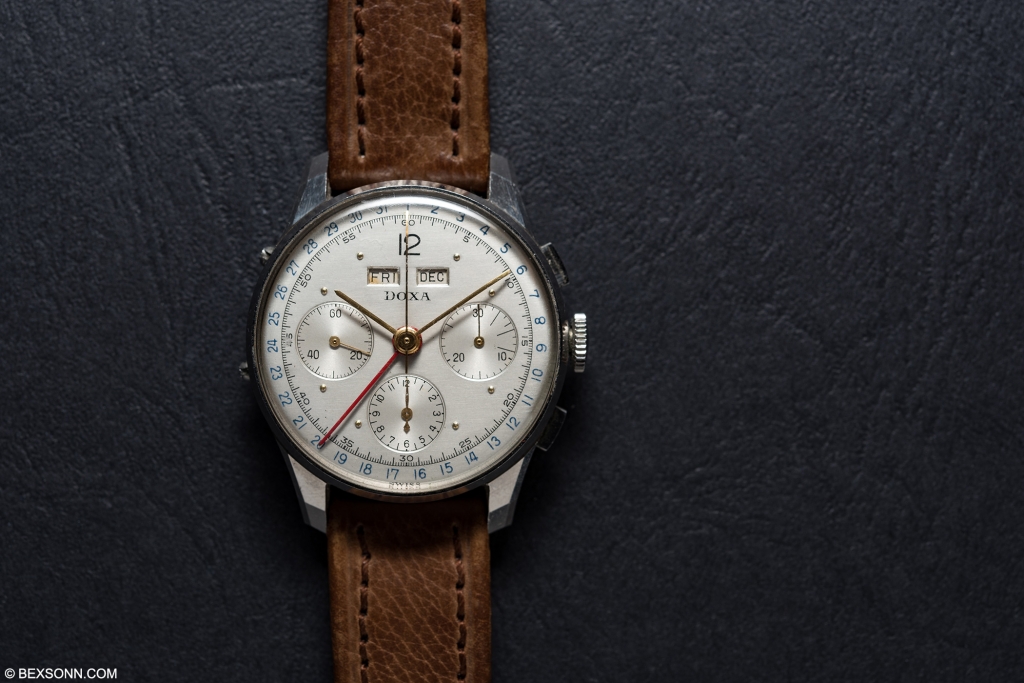 While many of you have probably heard of Doxa what you probably may not have known is back in the 40s, 50s and 60s they were creating some of the most beautiful chronographs. Doxa’s association with diver watches has been well documented but their chronographs, not so much. It also doesn’t help that back in the 1960s, Doxa’s archival information was damaged in a flood. But what Terrence had stashed away in his vault is this practical for the time and may I add, very beautiful, stainless steel Doxa triple calendar with chronograph. It is always nice to find examples of timepieces like this made in 1950s from a brand that is perhaps more synonymous today with a divers tool watch. The case on this triple calendar chronograph Doxa is in excellent condition, as is the dial – which displays some signs of wear but is still quite vibrant. Powering the calendar and chronograph complications, is the tried and tested Valjoux 72C that even Rolex have used on many occasions in their Dato-Compax models (aka Jean-Claude Killy). 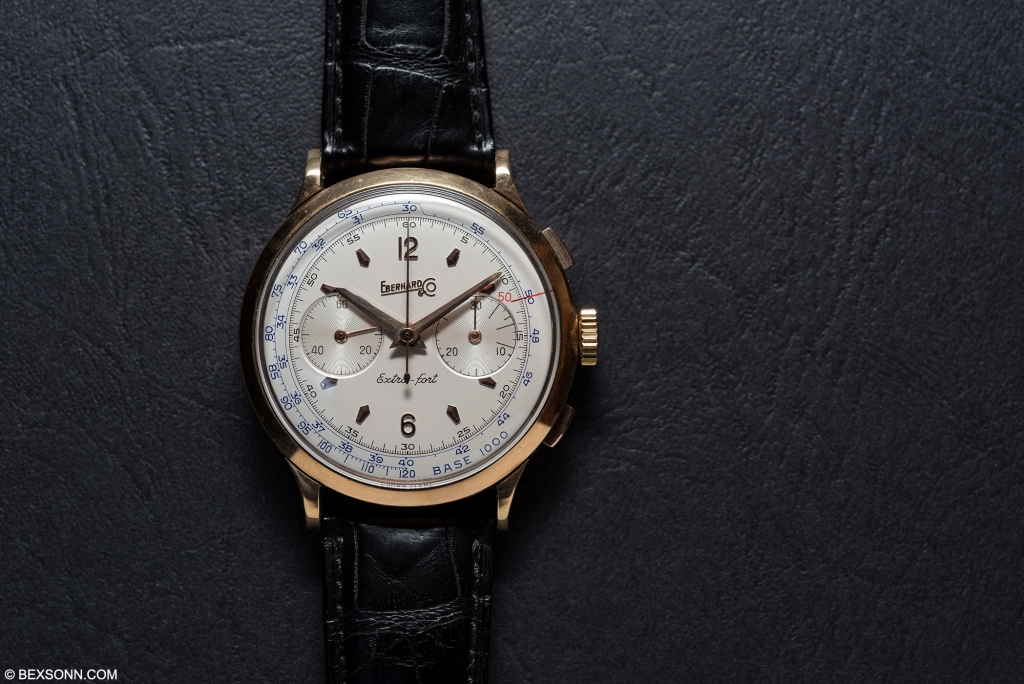 Eberhad & Co. like their watches are a rather interesting company. They launched their first ever chronograph around 1919, which featured a hinged case, with a single button push piece. Then in 1935, they introduced a two-button chronograph but this is where their chronographs perhaps become more interesting. Most chronographs that feature a two-button layout have a start-stop-reset function that is controlled by the push pieces at 2 and 4 o’clock respectively. But this is where this 1950s Eberhard and many like it differ. The chronograph start-stop-reset function is actually controlled by the push piece at 2 o’clock and what appears to be a push piece at 4 is actually a locking slide for the chronograph. Of course this Eberhard chronograph sports the inscription of Extra-Fort on the dial, however I’m told that “Pre-Extra-Fort” models are a little more desirable and bigger for that matter. Nonetheless, Extra-Fort models such as this can boast of a much improved case design  and better water and dust resistance over earlier models. 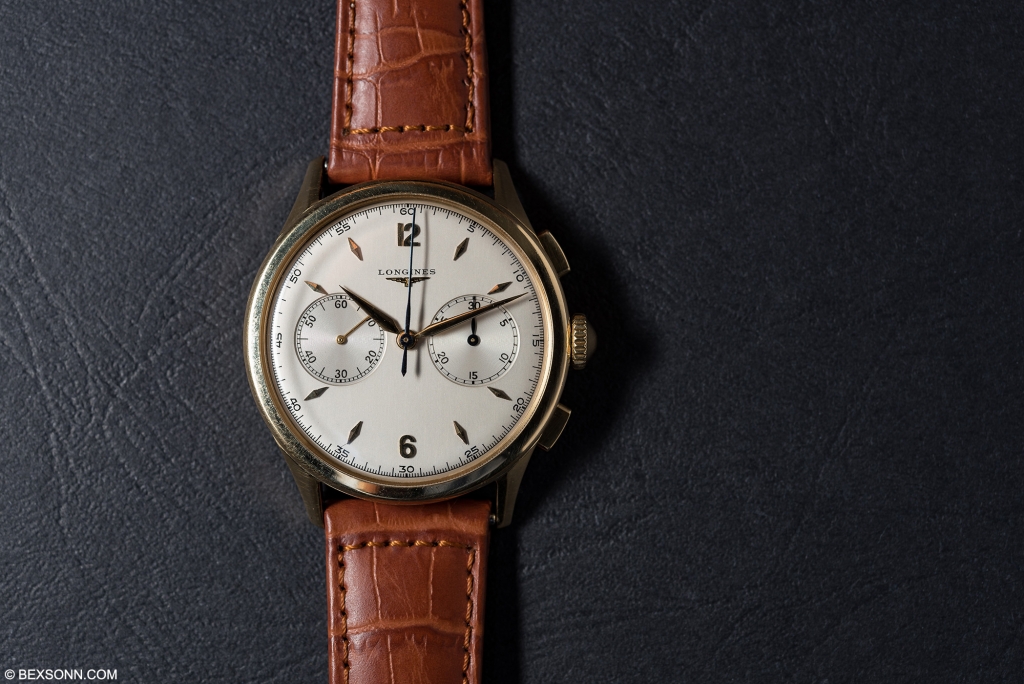 Longines are synonymous for creating excellent chronograph complications. In the mid-1930s Longines introduced one of the most extraordinary flyback chronographs, the calibre 13ZN that till this day is regarded as one of the greatest chronograph movements ever made, which in turn has had an impact on prices. Introduced circa 1947, Longines replaced the 13ZN calibre with another flyback chronograph that is also just as revered: the calibre 30CH. Regarded by many as one of the finest and most beautiful wristwatch chronograph movements, it was sadly Longines last complicated in-house movement. Pieces like this that housed the 30CH movement were designed to look a lot sportier than the 13ZN, hence the reason this example features a very large gold case, with very large sub dials. As you can see from the image, this piece has been nicely preserved. 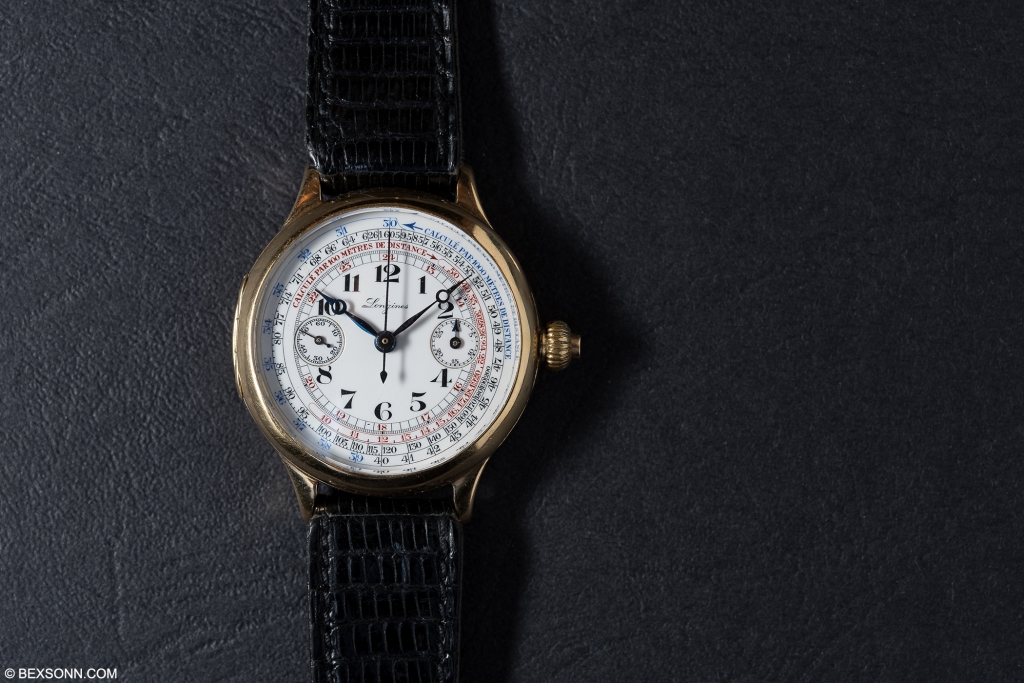 The Longines 13.33z is perhaps not as well-known to collectors as say the 13ZN or the 30CH for that matter but it is a very important watch indeed. First introduced in the early 20th century, it is the forbearer to the 13ZN, the father so to speak. It is also one of the earliest known chronograph wristwatches and while there are a few configurations, this is probably one of the more familiar examples, with the chronograph push-piece integrated into the crown at 3 o’clock. These pieces are not as collectible as the later sportier models but they are special in their own right and more accessible too (price-wise). This one has a beautiful enamel dial, which appears to be in great condition, considering its age, with bright honest font that has faded but not that much. It is a stunner! 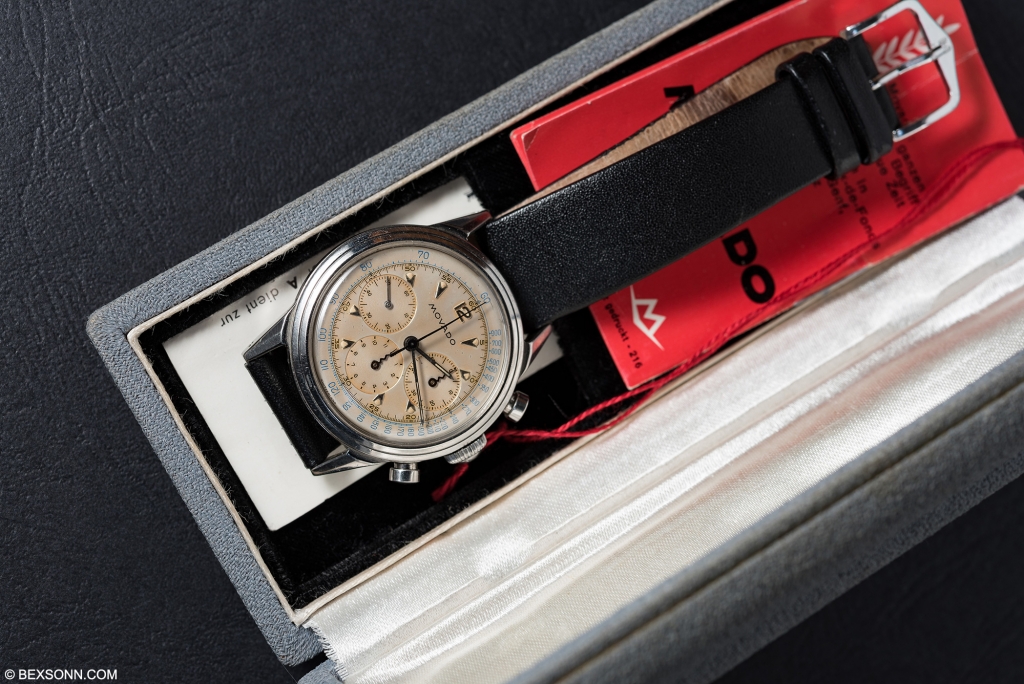 Also lurking in Terrence’s casual safe, so to speak, was this stunning Movado M95, complete with original box and hang tags. Movado are probably not the same company they used to be way back when but they made some truly beautiful chronographs in the 50s and 60s and one of them was this piece, which housed an in-house chronograph. The calibre M95 was in every sense a classic chronograph, with push pieces at 2 and 4 o’clock to start-stop and reset the chronograph. But what’s more, this example displays a Sub Sea engraving on the caseback, indicating the waterproofed 35mm case, manufactured by the iconic case maker Francois Borgel (later Taubert Frères), who famously made the case for the equally water-resistant Patek Philippe reference 1463. The dial on this seems to have taken on a kind of vignette tropical effect, adding even more character. Something I’ve always loved about these Movado chronographs are the characteristic “snake” hands in the two chronograph sub-registers, it’s so quirky. 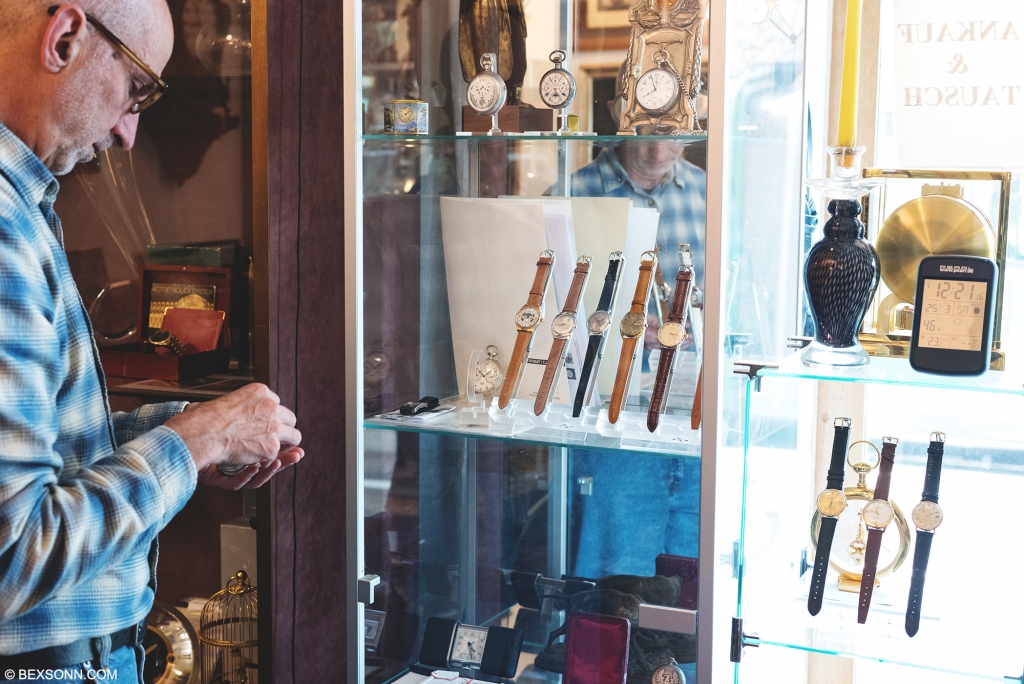 Speaking to Terrence after snapping some pictures of these pieces he told me that he’d now been in Basel at the very same shop for the last 24-years and he has no plans on moving anytime soon. Though he did say “I still have my grand piano and still perform the occasional concert, playing my own compositions” which you can see here on his other website. Something else Terrence mentioned to us during our visit to his shop is that “during the 30 years I have been dealing, the market in Switzerland has changed considerably. Thirty years ago, there were still many collectors of pocket watches and clocks but today it is 90% wrist watches.” Nonetheless, Terrence expressed “the watches and the music still give me great pleasure and I intend to continue to do both, there is no thought of retirement, life is too enjoyable to stop doing the things I love.”

We would like to thank Terrence Howells for taking the time to meet with us and show us this beautiful array of vintage watches. You may find them for sale, alongside other incredible pieces, online at antiquewatches.ch

Uhren Kunst Antiquitäten is located at:

You can also contact him via email too at thowells@antique-watches.ch