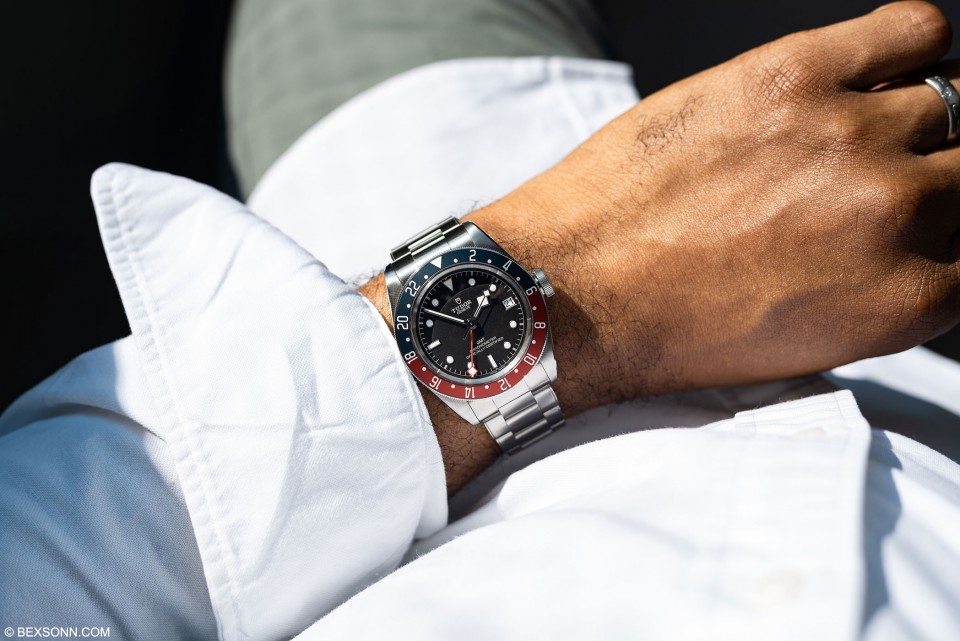 This year at Baselworld, Tudor introduce their first ever proper GMT timepiece, however, their older more expensive sister also introduced a new GMT, which left a few – myself included – thinking “has been planned?” While we were assured this wasn’t the case you can’t help but think it might just have been. Regardless, Tudor’s first GMT was warmly received it would undoubtedly be swiftly compared to the Rolex GMT-Master II. Although we managed to get our hands on it during our Baselworld meeting, we thought it would be good idea to get up close and personal with one when it finally arrived on U.K. soil. 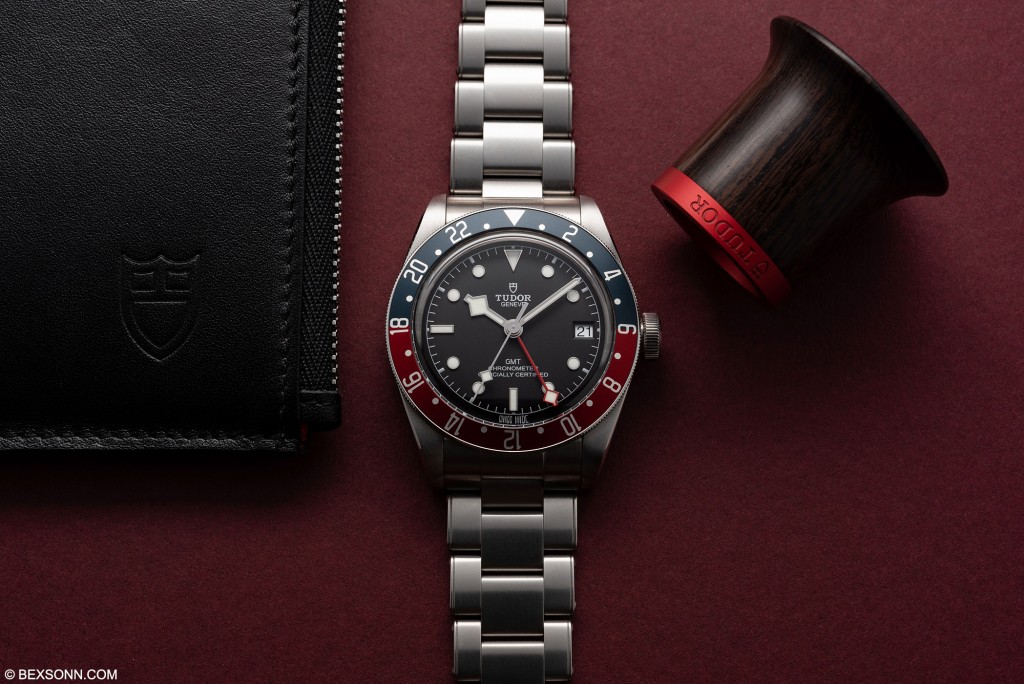 As you’ll most likely be aware, Tudor have no real history when it comes to GMT’s but of course Rolex do and that is something you’ll notice with the current design. We’ve previously gone in-depth with the various GMT-Master timepieces produced by Rolex, so I’ll not bore you with that information that you’ll find right here but as far as the Black Bay goes, let’s look at what we do know. First released in 2013, the Black Bay has seen quite a bit of success, with the range drawing inspiration from Tudor watches of yesteryear. The Black Bay is an all-round rugged timepiece that just seems to slot right into your life and can pretty much handle anything, hence the reason Tudor likely chose this model to house their first ever GMT complication, so to speak. Tudor haven’t really produced any GMT’s per se but have in the past released watches that do come in the guise of a GMT.

The GMT has stood the test of time and in my humble opinion is one the most useful modern mechanical complications. Whether you’re a regular or occasional jet setter the GMT’s functions are perhaps more apt than any other mechanical watch function available today. But just how does it work you may ask? 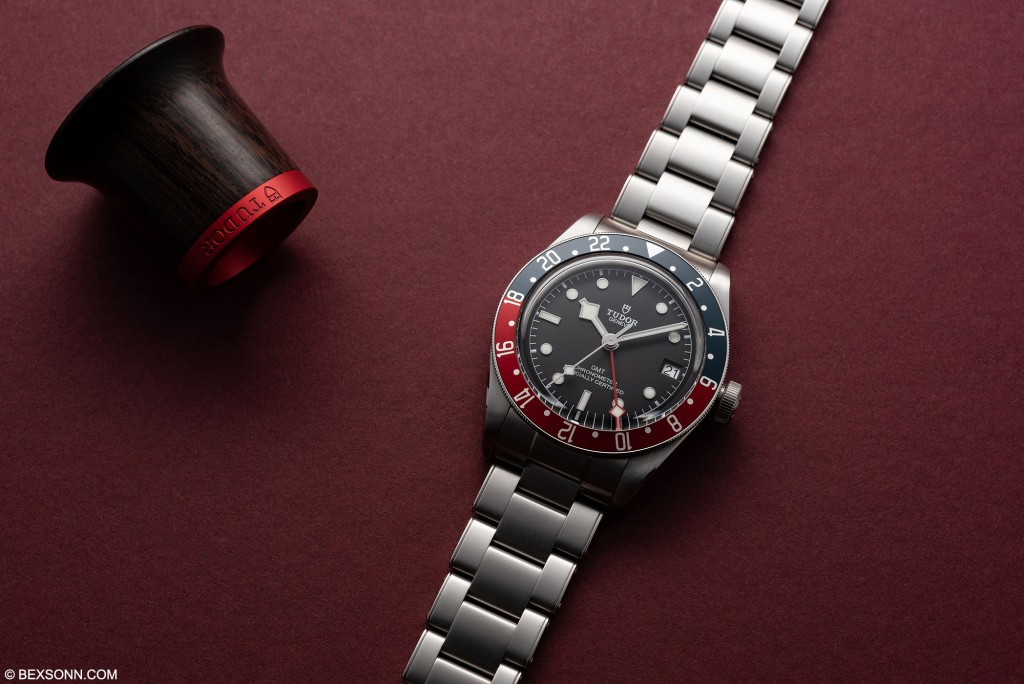 As many of you may well know, modern GMTs support a function which allows the wearer to advance the hour-hand independently from the minutes-hand (that will also advance the date to preserve both the timekeeping and date) to quick select a new local time. While the outer bi-directional bezel allows you to either track your home time or a second time zone. However, this is a function that also works vice versa – where you can use just the bezel to track your new time zone. You can also use the GMT hand to track a third time zone by using it against the main hour markers on the dial, though this requires some additional maths. This style of GMT display has is not only the most popular but has pretty much remained unchanged since it was first seen on Rolex first GMT.

Of course, the jump hour functionality is much more preferred and not too many watch manufacturers produce such a complication. We know for sure that Rolex already do but other than that, if you want a movement which supports local jumping hour, you’ve either got to heavily modify an existing base calibre or develop one yourself. Tudor went for the latter option but how much involvement there was from their older sister is something we will never know. And though I’ve asked the question before, I’m always assured Tudor developed the movement themselves – possibly true but one can’t help but think they may have had a helping hand. 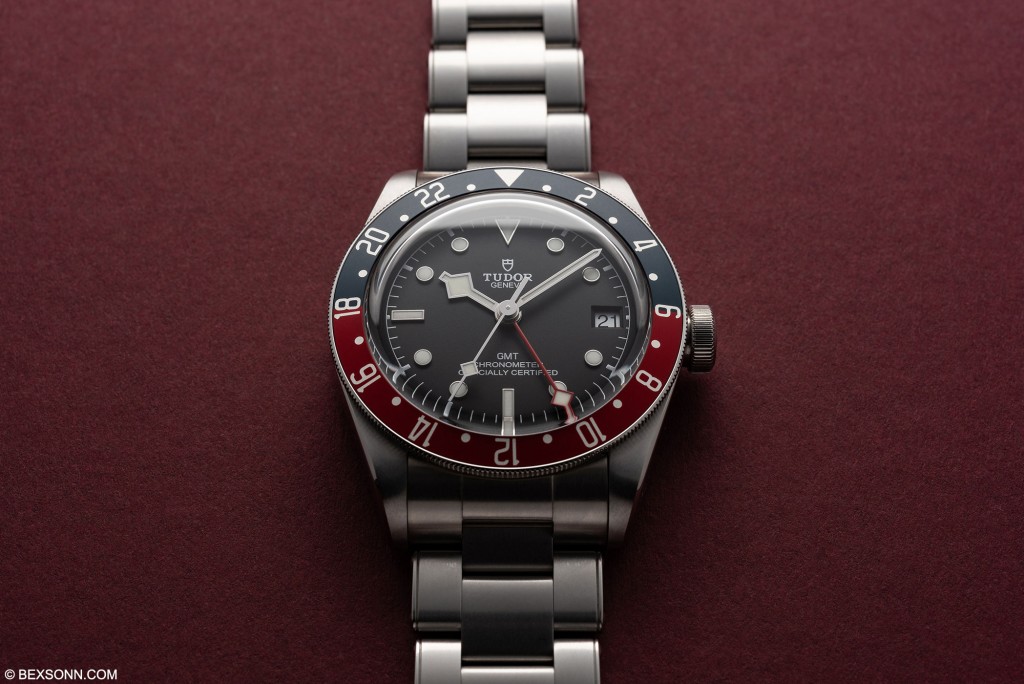 This new watch from Tudor is essentially a Black Bay with the added function of GMT. It sports a 41mm case made entirely out of stainless-steel, with a mixture of satin brushed and polished angles, and a case height of 15mm – which doesn’t exactly sound small. The Black Bay GMT is waterproof to 200 metres (660 ft) and as said by Tudor “designed to withstand the elements.” Its winding crown tube is also satin-brushed steel, something new for the Black Bay line and aesthetically in keeping with the case and winding crown.

The bidirectional rotatable bezel is calibrated for 24 hours, with the twelve daylight hours printed on the burgundy section and the night-time hours on the blue, so it’s not quite “Pepsi” colours but it’s in keeping with signature GMT look. However, note that Tudor opted for an aluminium bezel as opposed to a ceramic one – which obviously keeps cost down but also lends a more authentic GMT appearance in my humble opinion. This most likely means it will one day patina quite nicely – a detail nothing short genius. One of the standout features of the bezel that I really like are the use of elongated numeral font, that if you look closely matches that of the “GMT” text written on the dial.

The case is finished in a fashion we’ve come to expect from Tudor, with precision but retaining that tool-watch charm and likeability that has that brutish “I can handle pretty much anything you through at me” build quality. The fact the Black Bay GMT is waterproof up to 200m makes it more versatile than your average GMT, allowing you to explore greater depths than most other dual time zone watches – if you happen to be more adventurous than your typical holiday goer who only steps foot into a pool. 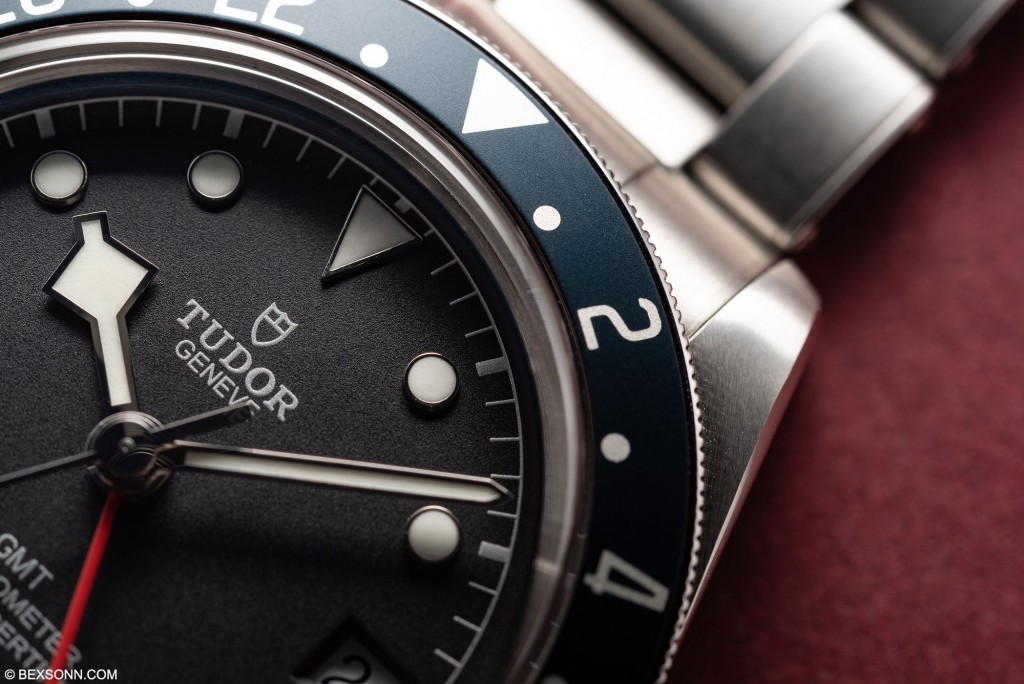 While Tudor have embarked on a new path with the introduction of GMT to the Black Bay line, the watch itself bares similarities to Rolex first ever GMT: the reference 6542. The fact it doesn’t feature crown guards is something inherited from the Black Bay line, but the specific use of a deep blue and burgundy on the bezel, not to mention the coin edge finish, is kind of reminiscent of the Rolex GMT from the 1950s. 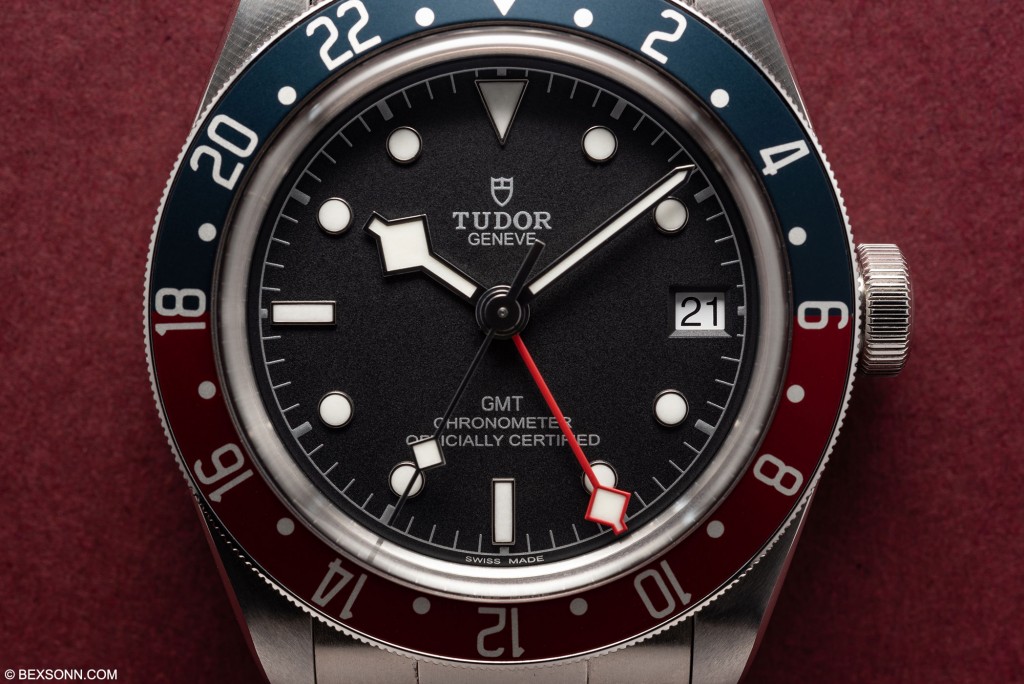 The dial is styled in the typical fashion we’ve come to expect from Black Bay; it’s a matte black affair, with large applied markers, inlaid with Super Luminova. However, it is nice to see the use of silver for all text and the minute track. The inclusion of a date window at 3 o’clock is to be expected but nothing unusual, as we saw Tudor introduce this new feature last year on the Black Bay Steel. While the use of “Snowflake” hands on a dial with round markers is still something that in my opinion doesn’t quite look right, it works and the added extra red GMT hand that also makes use of the square snowflake-like shape is indeed very, very cool. 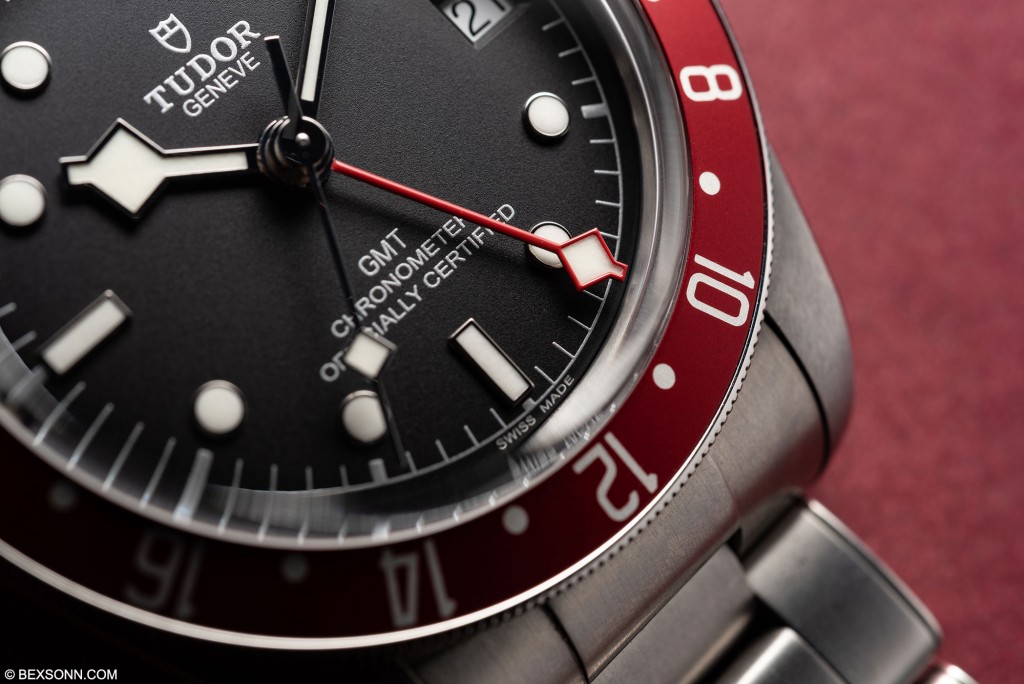 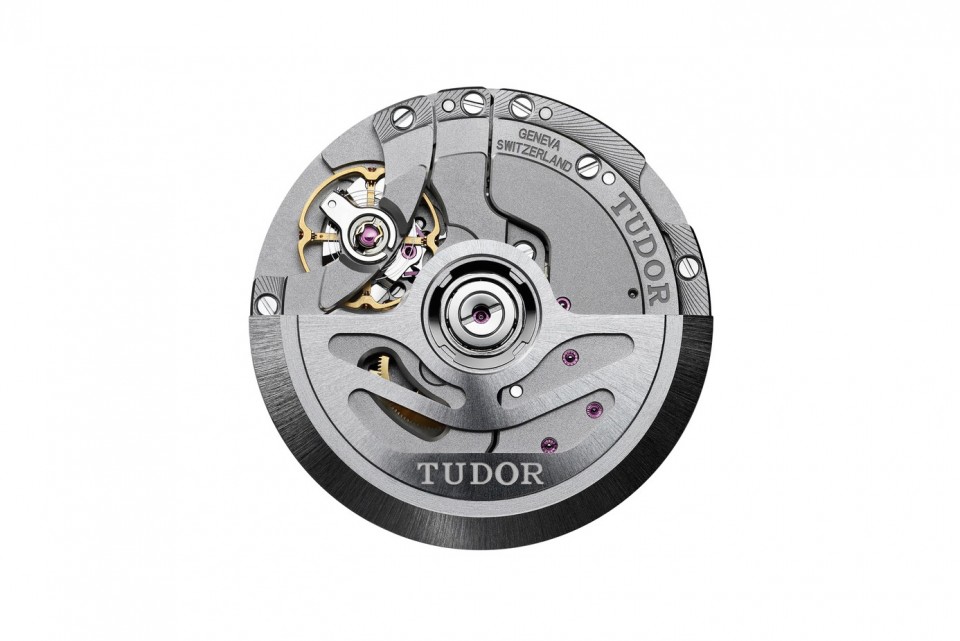 As already mentioned, Tudor developed a new in-house calibre reference MT5652 for the Black Bay GMT model. The GMT functionality has been fully integrated into the movement rather than modular, this approach has given Tudor a more flexible calibre that allowed them to keep this new movement svelte and identical in thickness to the standard Black Bay. The COSC certified calibre MT5652 offers a power reserve of 70 hours, featuring distinguished finishing on its bridges and mainplates, as well as a satin-brushed rotor all measuring some 31.8mm in diameter and 7.52mm thick. 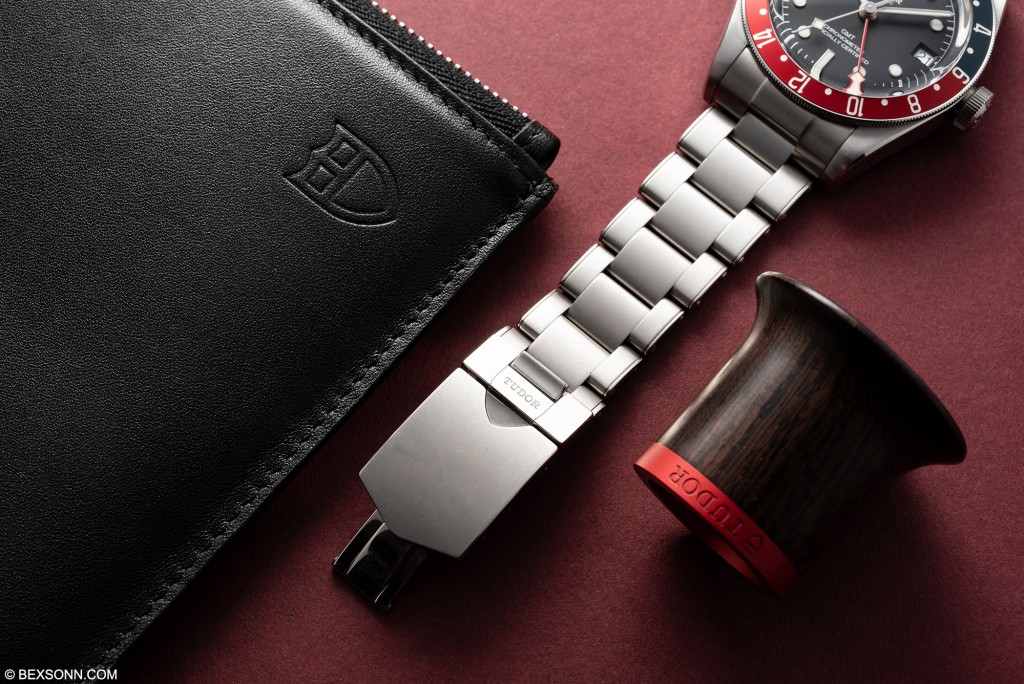 Another touch that adds to the overall aesthetics of the Black Bay GMT, is the steel bracelet it’s been paired on. We first saw this 1950s/1960s vintage-style inspired, riveted bracelet a couple of years ago on the Black Bay Black/Dark. This modern interpretation is true to form and features the very distinct stepped construction, though instead features faux rivets and modern solid links that offers a vintage look but has modern robustness.

While the vintage version of this style of bracelet featured flat links, this newer modern version uses links that have a slight curvature to them, making it much more comfortable to wear than those of yesteryear. Oh, and it doesn’t seem to pull out wrist hairs too. The Black Bay GMT is also available with a “Terra di Senna” brown leather strap with deployant clasp, or a black fabric strap with a burgundy band and pin buckle.

Yet again, Tudor introduced some brilliant novelties this year but while the Heritage Black Bay 58 was what really took my fancy, the GMT just couldn’t be ignored and on closer inspection this introduction was rather excellent. I’ve always been a fan of the Heritage Black Bay but when Tudor introduced this piece at this year’s Baselworld, I was surprised but not initially enthusiastic but it’s grown on me.

On the wrist it wears just as well as any other Black Bay would, its 41mm case has always felt a little chunky but this is part and parcel of the overall Black Bay package. As you’ve likely heard me mention before, I tend to wear quite small vintage watches, with my largest piece being around 40mm, so one millimetre shouldn’t be that much of a difference, right? To be honest the diameter of the watch isn’t the problem for me, it’s always been the height but it’s not a complete deal breaker. And moreover, Tudor appear to have mitigated some of this problem by adding a small detail in the under side of the case. They’ve added quite a large chamfer to the section of the watch where the case meets your wrist. The effect? Noticeable but not immediately. 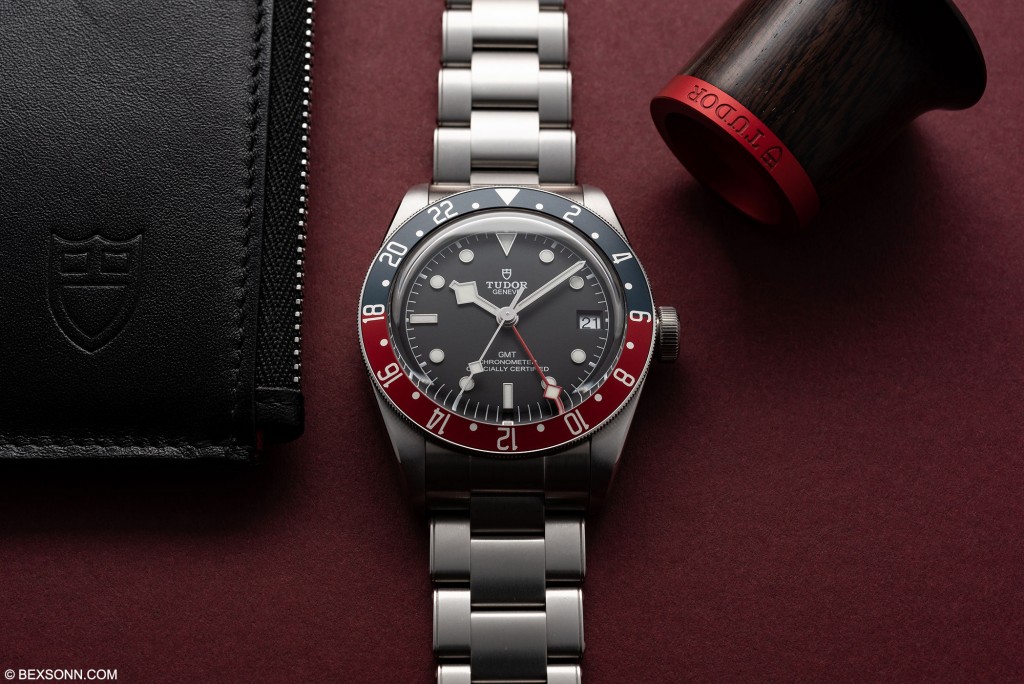 I love wearing my watches on their bracelets, so for me the faux riveted bracelet also adds that little bit extra to the Black Bay GMT but of course the one thing that can’t go unnoticed is the extra heft it adds too. That said, it still very comfortable to wear and with a few adjustments of the micro positions located in the clasp, getting that perfect fit isn’t too difficult.

Overall the Black Bay GMT is a very enjoyable watch to wear and as a tool watch has much too offer. Its rugged charm is evident, and the addition of the GMT functionality makes it perfect of the frequent jet setter too. But perhaps the thing I admire about it most is how understated it is. Unlike its shinier, more expensive and seemingly impossible to find older sister (steel GMT-Master II I’m looking at you!), the Black Bay GMT is much subtler, with its satin brushed angles and gentle hue of blue and burgundy 24-hour bezel – it all just seems to work and for that I take my hat off to Tudor.

The Tudor Black Bay GMT on the riveted steel bracelet is priced at £2,790 and is priced at £2,570 on the brown leather strap or fabric strap. For more information on visit the official Tudor website. 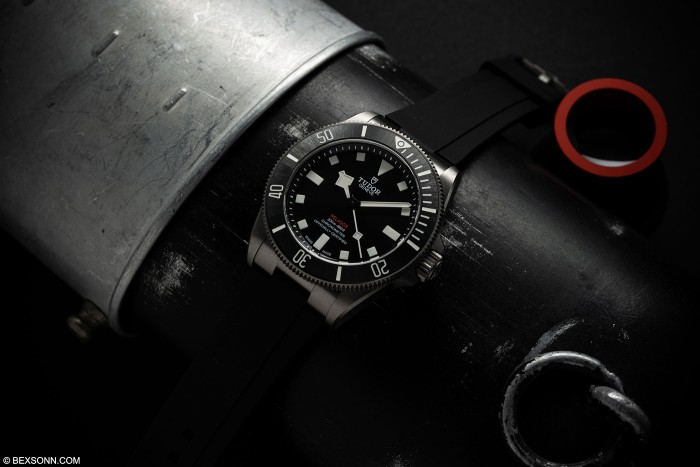