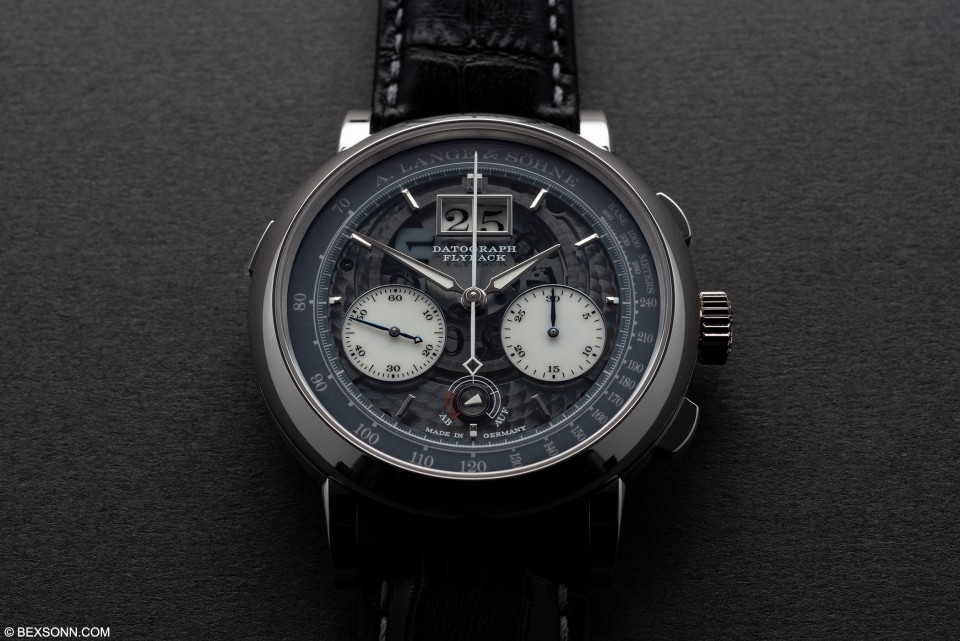 Let me begin by saying, that the Datograph would have to be A. Lange & Sohne’s most important and iconic piece in their line-up. While there are more striking designs from the manufacture such as the Lange 1 with its asymmetrical layout or the Zeitwerk with its ingenious digital display, in the context of when it was produced and the sheer quality of this timepiece, the Datograph comes in first for me. 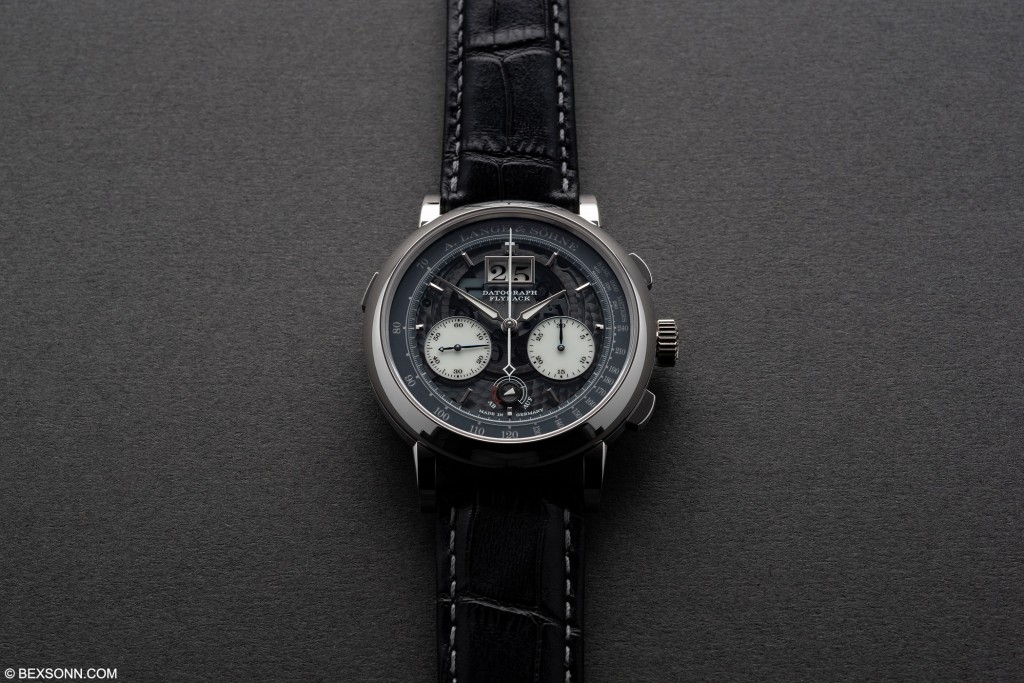 Introduced in 1999, this model has been hailed by many as perhaps the greatest chronograph of the modern era. With the architecturally beautiful and complicated movement, all finished expertly by hand, it was the first in-house chronograph of our time. Mind you, up until recently Patek Philippe and Vacheron Constantin were using Lemania based ebauches while Audemars Piguet still uses an outsourced base F. Piguet calibre for their chronographs. This is largely because chronographs are expensive to produce these days, and to produce an in-house chronograph is no easy feat. 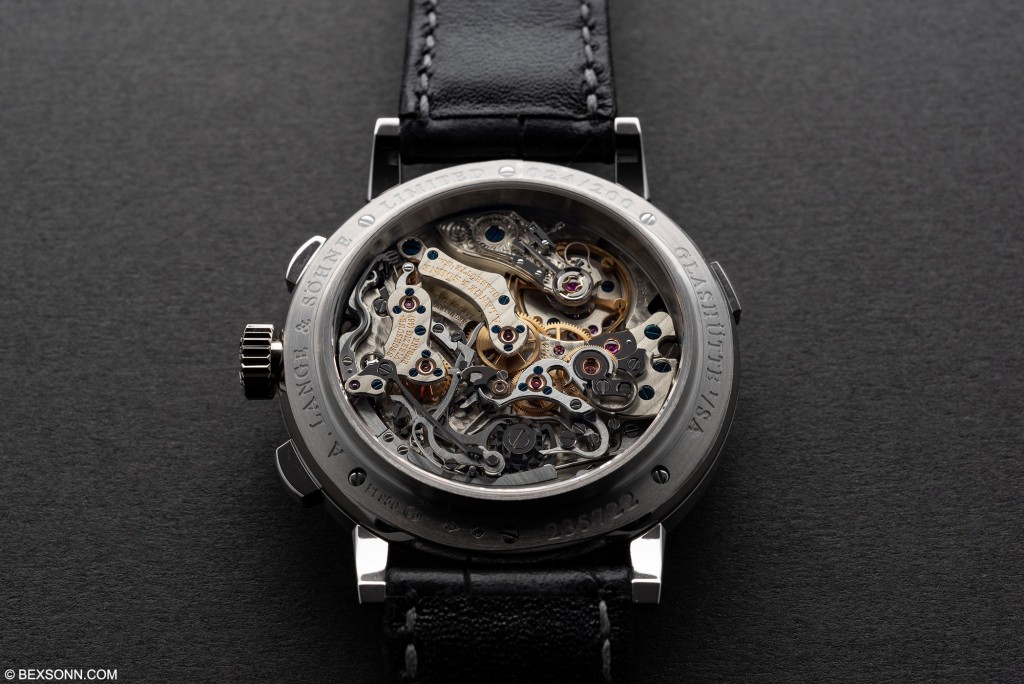 When talking about the Datograph, you can’t not talk about the movement. It features a manually wound in-house Calibre L951.7 with a flyback function. It has been tweaked slightly over the years, with updates to the power reserve up to 60 hours and an Up/Down power reserve indicator, but other than that it has largely remained the same. What is so crazy about this movement though, is just how beautiful it is. It has to be the most architecturally beautiful chronograph ever produced and the finishing is the best in the industry. Just look at the classic hand engraved Lange balance cock!

As a testament to the Datograph’s quality above the rest, Philippe Dufour owns one himself and calls it the nicest chronograph ever made. That means a lot coming from one of the greatest watchmakers of our generation. 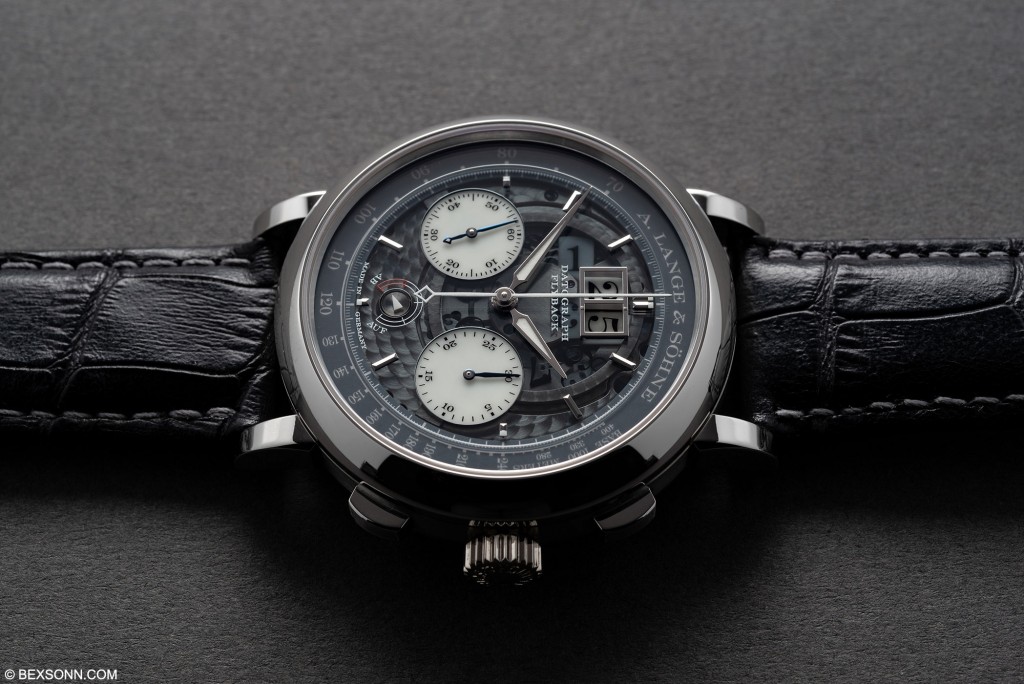 So, while A. Lange & Söhne has produced the Datograph for nearly two decades now, what we are looking at is a rework of the original classic and it has been given the manufacture’s Lumen treatment. The Lumen series is basically Lange’s creative take on improving legibility and uses a whole host of luminous coated surfaces to achieve this.

The Datograph is, in fact, the fourth watch to be released in a Lumen version, with the previous models being the Grande Lange 1, the Grande Lange 1 Moonphase and the Zeitwerk, which you can see here. While it is nothing new, the Lumen watches are always so beautiful and well executed that it is worth writing about.

Housed in a 41mm platinum case, it begins with the classic Datograph layout. It has a pusher at 10 o’clock acting as a quick-set for the date, an outer stepped tachymeter and minute scale, two sub registers featuring the running seconds and minute counter, a power reserve indicator at 6 o’clock and the signature oversized date in a framed double aperture at 12 o’clock. 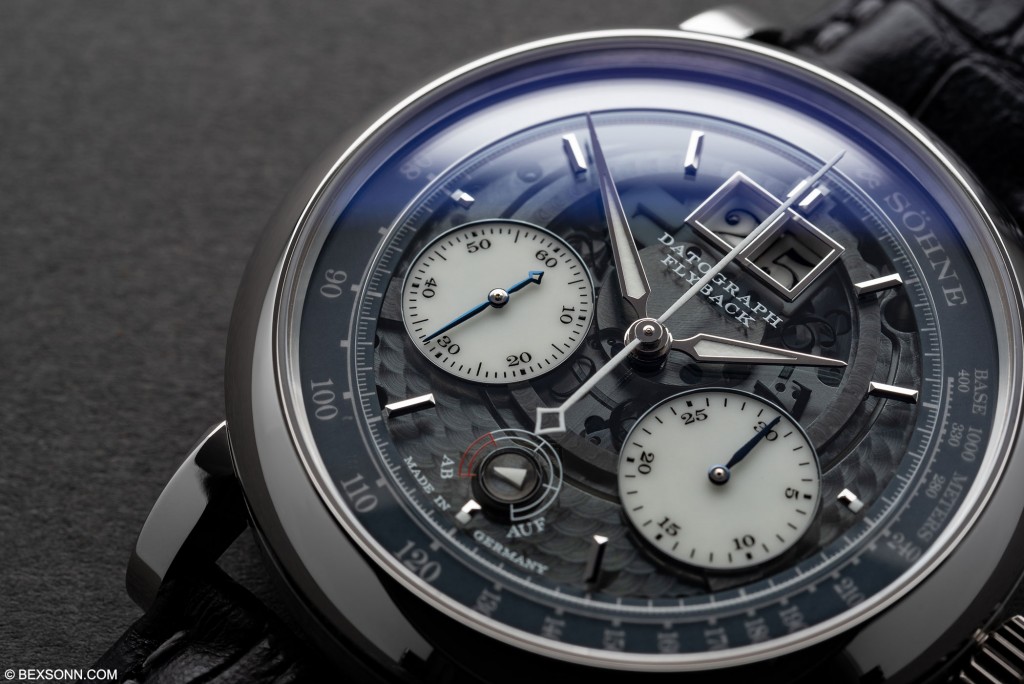 What makes this interesting, is how exactly, this layout is executed. As mentioned, this is the Lumen version and it becomes an entirely different watch as a result. Beginning with the outer tachymeter and minute scale, it is made from German silver and the whole thing is coated with Lange’s special luminous compound. The minute and hour hand are filled with lume while the chronograph seconds is fully coated too. The minute and running seconds sub dials feature blued steel hands and, in the backdrop, the entire subdial is similarly coated. To top things off, the huge date aperture is coated too, and the result is a stunning luminous display when the lights are off. Just take a look at the photos, as they perhaps give a better understanding of what I mean. 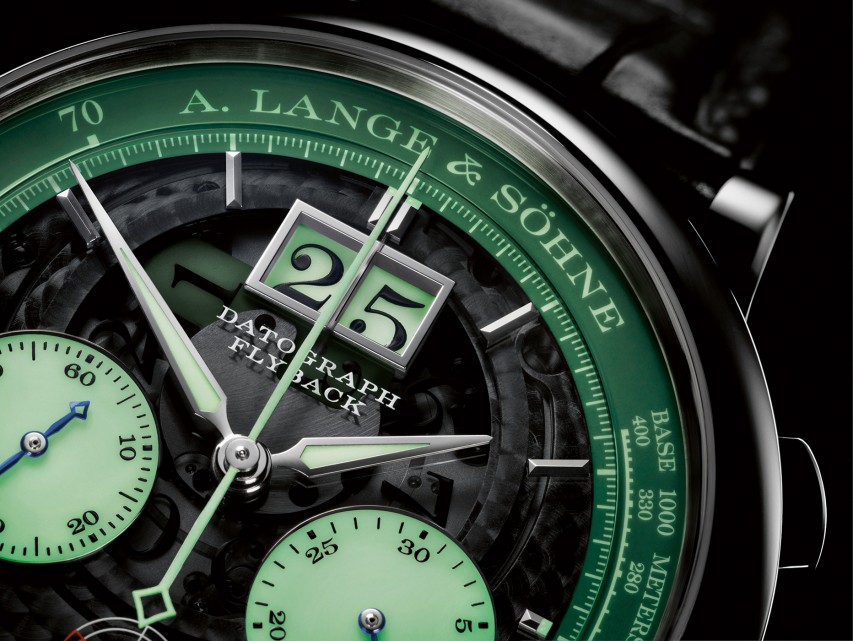 Interestingly, one of the main obstacles of the Lumen watches ironically lies in Lange’s most iconic design element, the oversized date aperture. The challenge was how Lange could ensure that the date wheels, despite being covered for most of the day, would remain charged and luminous at the stroke of midnight. Ingeniously, this was achieved through a black printed semi-transparent sapphire crystal dial that filters out most of the visible light but allow the necessary UV rays to charge the date discs. 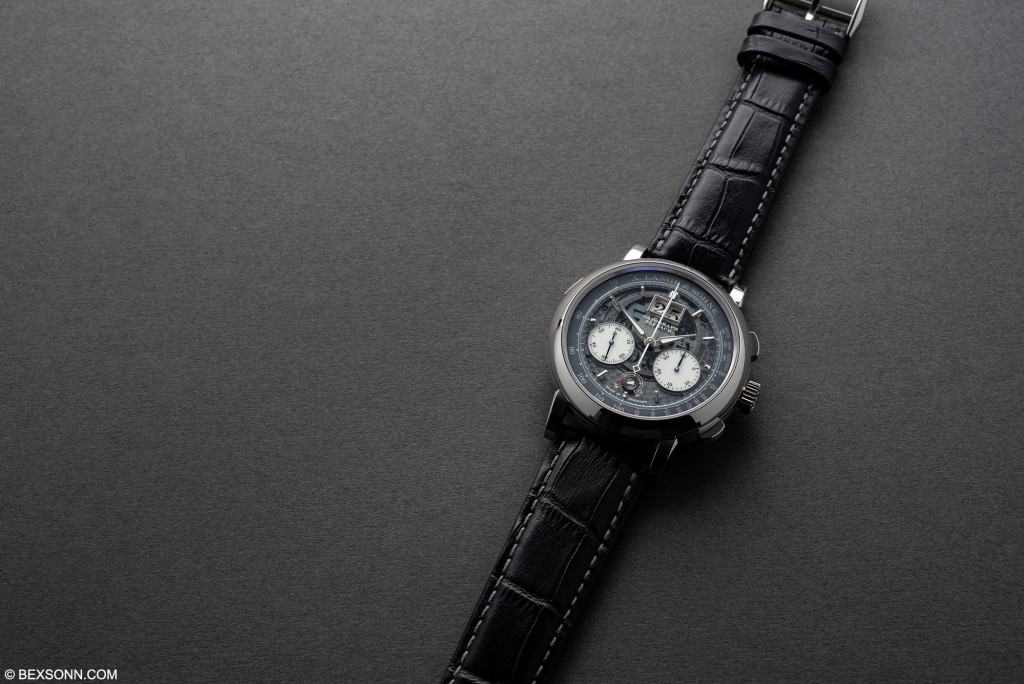 The Datograph Lumen is really a masterstroke in both problem solving and design, building upon an already legendary watch. While most update releases from brands these days might seem superfluous and gimmicky, I have always respected Lange in that their releases are always driven by practicality and improvements. The Lumen line is a really creative take on legibility and every element, from the date disc problem to choosing only necessary parts to be luminous is really well executed. I am a big, big fan.

The A. Lange & Söhne Datograph Up/Down Lumen is a limited edition of 200 pieces worldwide and is priced at £84,000.

For more information on the new Datograph Up/Down “Lumen”, visit the official A. Lange & Söhne website. 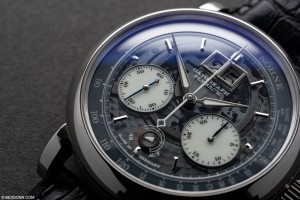 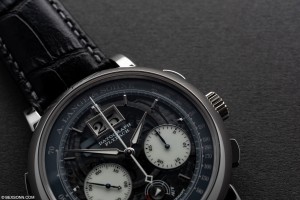 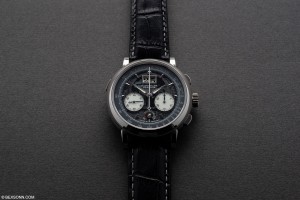 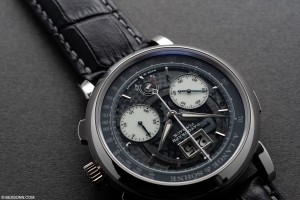 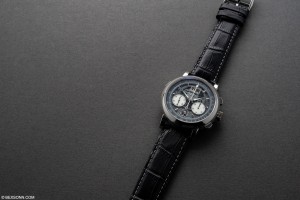 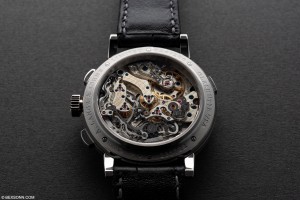 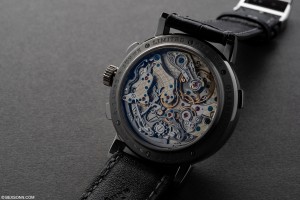 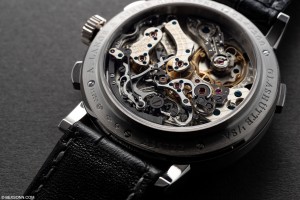 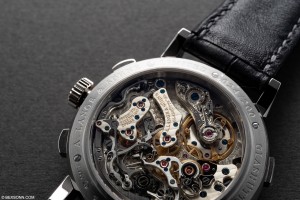 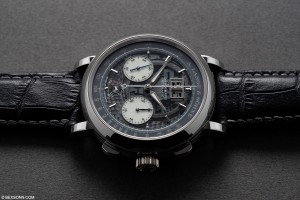