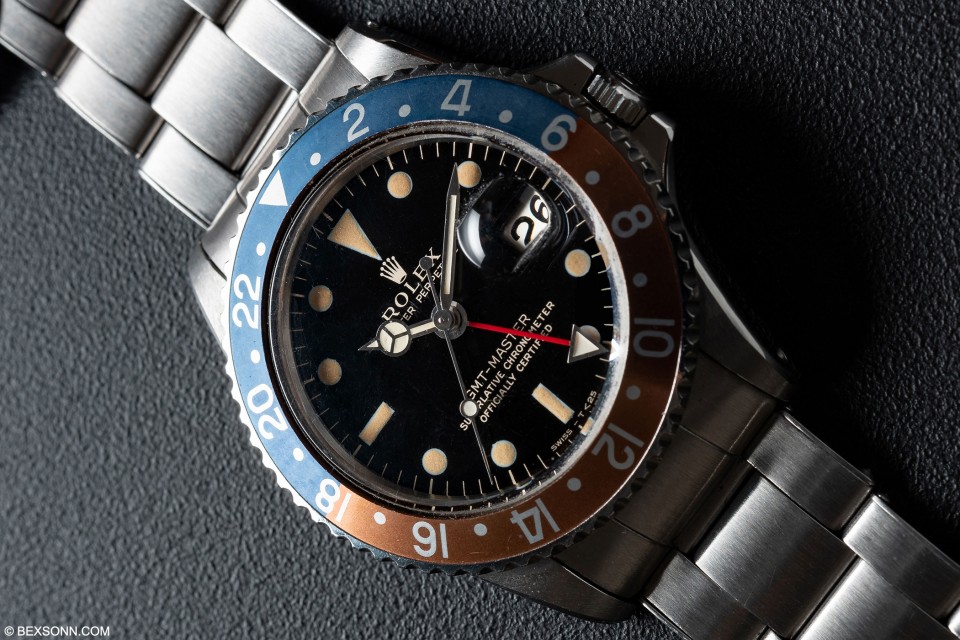 Auction season is upon us and this year Sotheby’s are kicking things off quite early with their first London watch auction. We’ve highlighted many watches over the past 5 years from many auction houses but up until now have never highlighted anything from Sotheby’s. Why? We’re not completely sure why but long may it continue. Sotheby’s are a well-seasoned auction house when it comes to selling watches, over the many years in doing so, they’ve set some enviable records along the way. Perhaps the most important watch that comes to mind is the Henry Graves Supercomplication Patek Philippe Pocketwatch, which sold for a record-breaking $24M dollars – a record that still stands till this day. That said, for those of you who follow the auctions more religiously (like we do), you’ll have noticed there has been a bit of a shuffle staff-wise. Sam Hines, once of Bacs & Russo in Association with Phillips, is now Senior Director and Head of Watches Worldwide for Sotheby’s, and the lovely Kate Lacey, who was also a former employee of Phillips Watch Department, is now at Sotheby’s and based in London – and is of course the person we met with last week to have a look at what’s coming up in their London auction taking place next week. 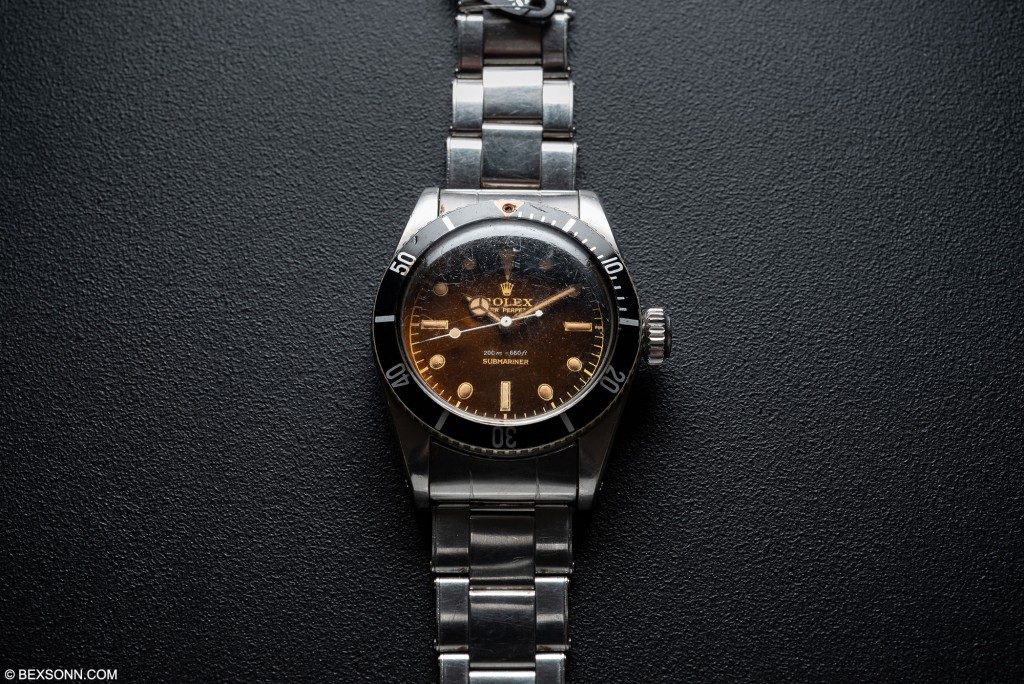 For a Rolex collector, there is perhaps nothing more satisfying than a Submariner but let’s not forget there is a sub collection of the Submariner. A Submariner always proves to be an interesting talking point among collectors but of course there is always an element of one-upmanship. That said, this example is perhaps one that collectors alike dream of. There are many superlatives to describe this current lot but if there is one that is evident, it is undoubtedly unique. This ref. 6538 from circa 1959, not only has a ‘Big Crown’, period correct bezel and honest case but the tropical nature of the dial is a sight to behold. These traits put together have an alluring effect on any kind of watch enthusiast. The tropical ageing nature of the dial can only be likened to a piece of art, with subtle but very significant details that make it, one of the most substantial known 6538 in the collecting community. 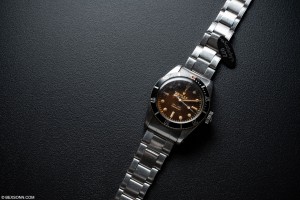 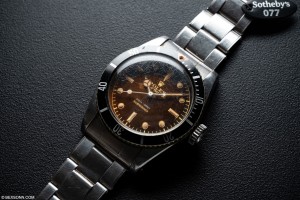 As already mentioned, the black lacquered dial has aged to perfection, like that of a fine wine or cheese, to a uniform chocolate-brown hue, accented by the cream aged indexes and hands. If that wasn’t enough, this example has been consigned to auction by the family of the original owner. Most early 6538s can be found with a range of small dial variations, however this example, displays just two lines of text, with the depth rating written in silver, the rest of the dials text, coronet, markers and model name are in gilt, which has faded to a warm copper tone. 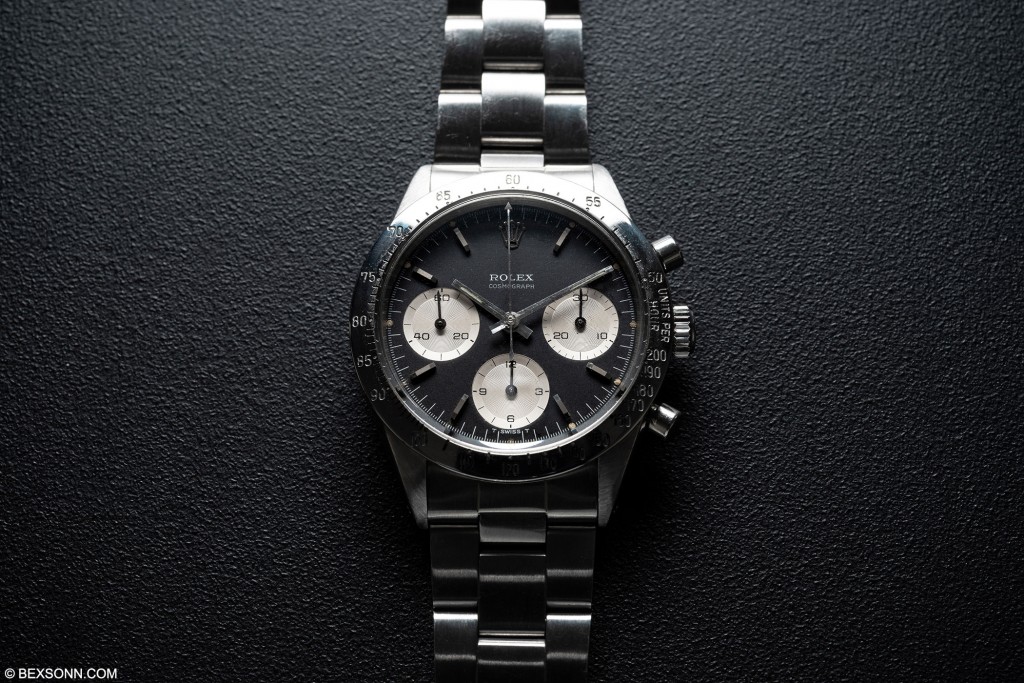 The reference 6239 is the first Daytona ever produced by Rolex, even though the watch had yet to be formally named as such. Introduced in 1963, the iconic chronograph timepiece for the first time featured an external tachymetre scale on its bezel. This example sports a black matte dial that is simply signed “Rolex Cosmograph” though if you look closer you’ll noticed the wording “Cosmograph” has been printed in silver. However, you’ll also note that the word Daytona isn’t present on this piece and only really appeared on dials around 1965, which is the precise year of this model. Meaning this particular lot is one of the last examples produced in this way. 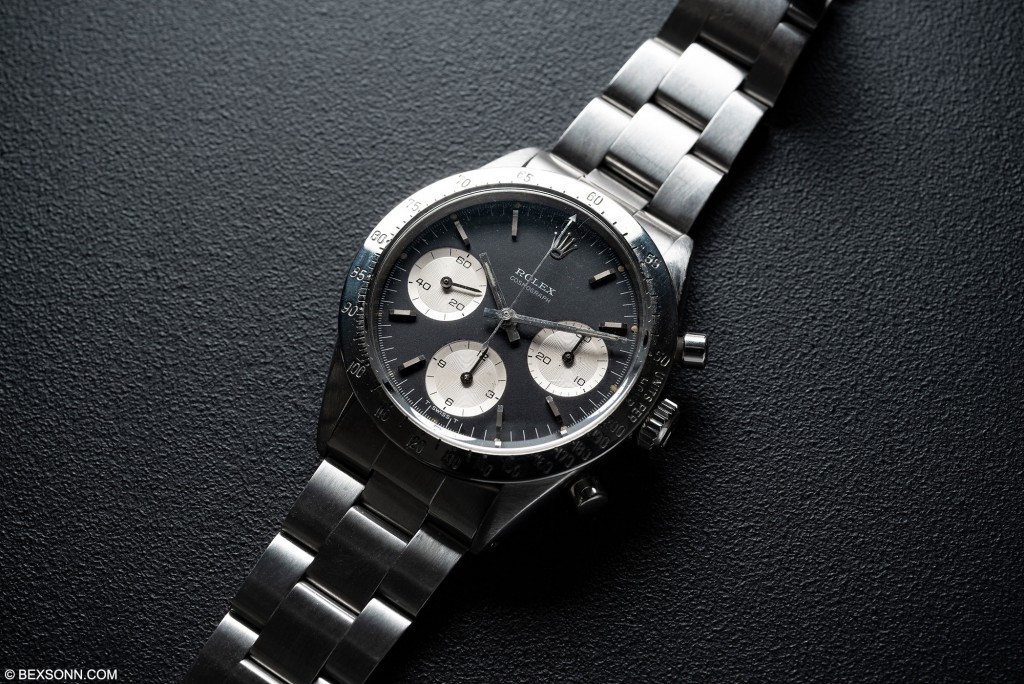 Moreover, the present lot is in honest condition and is presented with its original Rolex guarantee and box, however, there is more to its story than that. Daytona’s are sought-after chronographs in their own right but ones that possess interesting provenance, perhaps have more allure. There are many reasons why some of us choose to purchase certain watches throughout our lives, most often than not to celebrate a particular moment. The vendor of this example, a Dutchman, originally joined the RAF following the liberation of the Netherlands during WWII. After his successful career with the British forces he later went on to join the Dutch forces (the Koninklijke Luchtmacht or KLu), as a flight engineer. Flying was a huge part of his life and so he commemorated this feat buy purchasing this Rolex Daytona in 1968 which, the family of the original owner have noted, he wore on a regular basis. 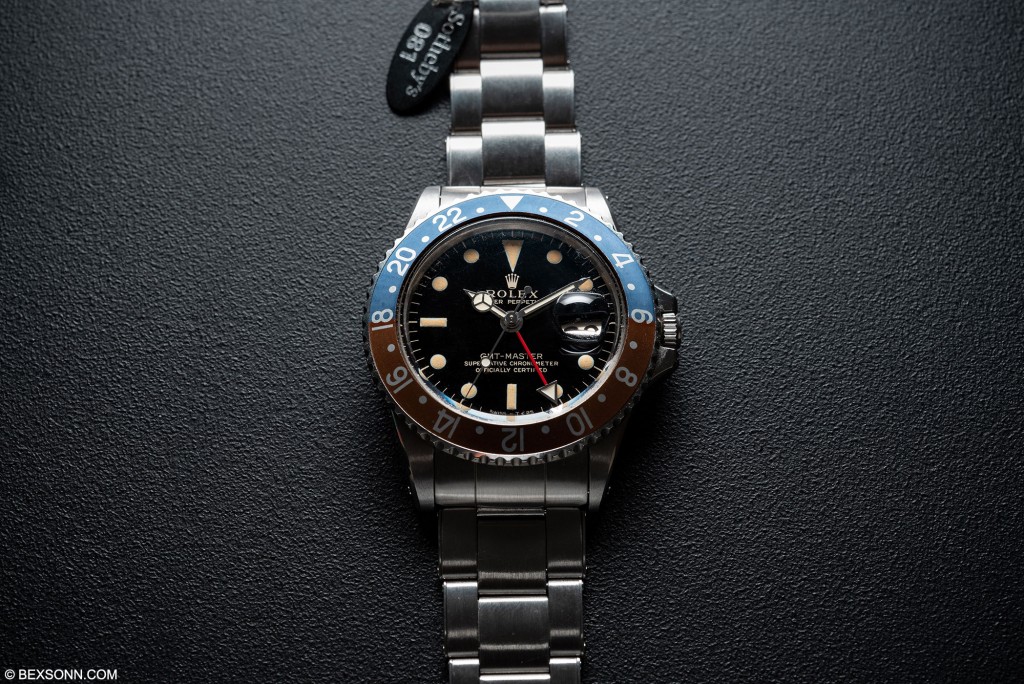 The reference 1675 GMT-Master really needs no introduction, as many of you may know it was the successor to the no-crown guard 6542. However, this particular example is one of the earliest 1675s, as denoted by a few familiar traits, which we have seen before. This example from 1965 features a glossy dial with gilt text, with markers that have aged gracefully to a warm cream colour, but as you’ll notice the dial reads “Superlative Chronometer Officially Certified” (COSC), though not as rare as those with OCC dials, it still displays charming qualities. That said, it would appear the hands have most likely been replaced at some point, during its potentially one and only service. The bezel has faded to an even, light shade of blue and red, and the case it something rather special. 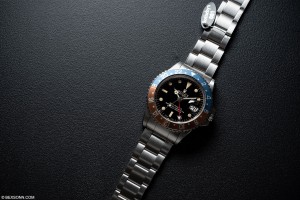 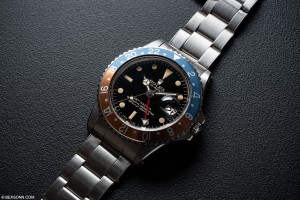 The case appears to have retained its original bevels and has at some point been polished but this has been done sparingly. It comes on its original 7206 bracelet with 80 end pieces and just like the case, has been well-preserved. The watch was originally presented as a graduation present back in 1966, and has since remained the property of its original owner. This GMT-Master 1675 is a highly wearable and attractive vintage sports Rolex for any collector looking to add a piece of history. 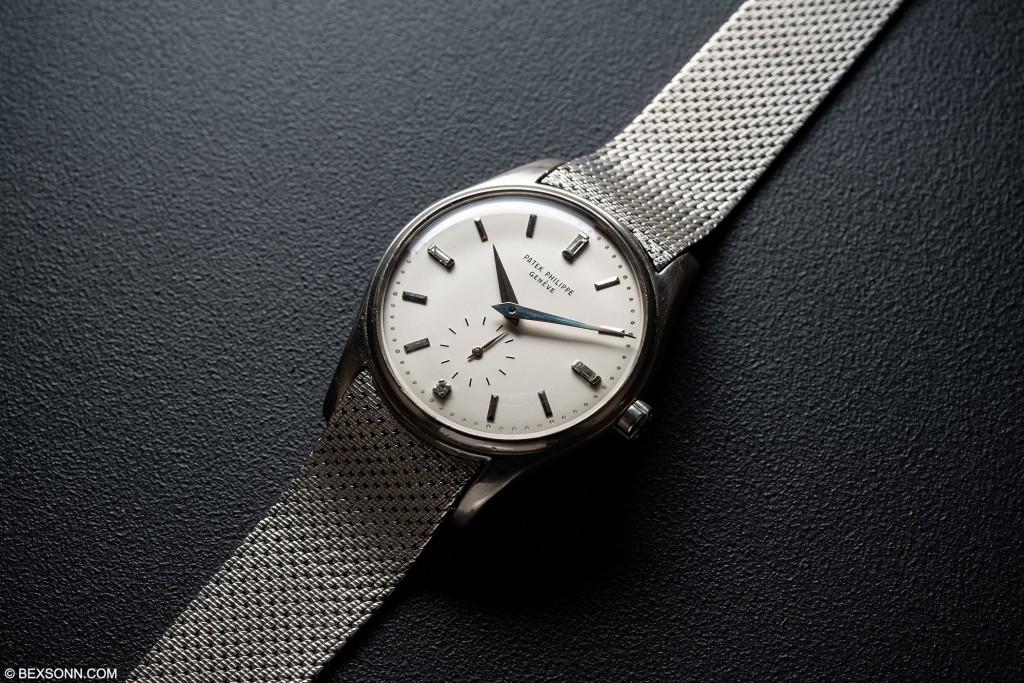 Patek Philippe are one of the most well-known high-end watch brands in the world and while collectors of the brands vintage examples will most likely drool over the complicated pieces they’ve made throughout their history. The piece that really resonates with me and is one of my favourite timepieces Patek ever made, has to be the reference 2526. The 2526 was made between 1953 to 1960 and was the first Patek Philippe wristwatch to be serially produced with an automatic movement: the calibre 12’”600. Not only was this new mechanism technically sound but also finished to the highest quality, as you’d expect any Patek to be, featuring Cote ‘d Genève, circular graining and a solid gold centre mounted weight with a fine hobnail engraving. Something that admittedly sounds trivial by today’s standards but just take a moment to remember that exhibition case backs weren’t vogue back then, so all this beauty was hidden beneath the case back. These are the little details that made Patek, Patek back then! 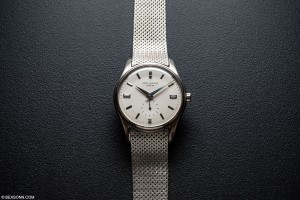 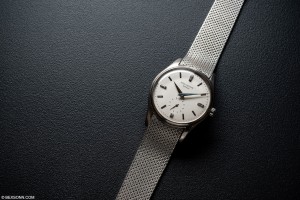 During the 2526s seven-year production, an estimated 2,800 – 3,000 examples were made. Of those made 80% were cased in yellow-gold and around 12% in pink-gold, leaving just 2% that were neither. That 2% were either cased in platinum or white-gold. This particular lot is the latter and considered to be the rarest version with less than 20 examples known in the market – but there’s more. This particular example is fitted with a silver dial with subtle diamond-set quarter-hour indexes, original big “PP” crown and its original, white-gold, Patek Philippe and Gay Frères bracelet (something of a rarity). Furthermore, it comes with its original presentation case, something scarcely seen. This 2526 is a real collectors delight and will undoubtedly compliment any important collectors Patek collection. 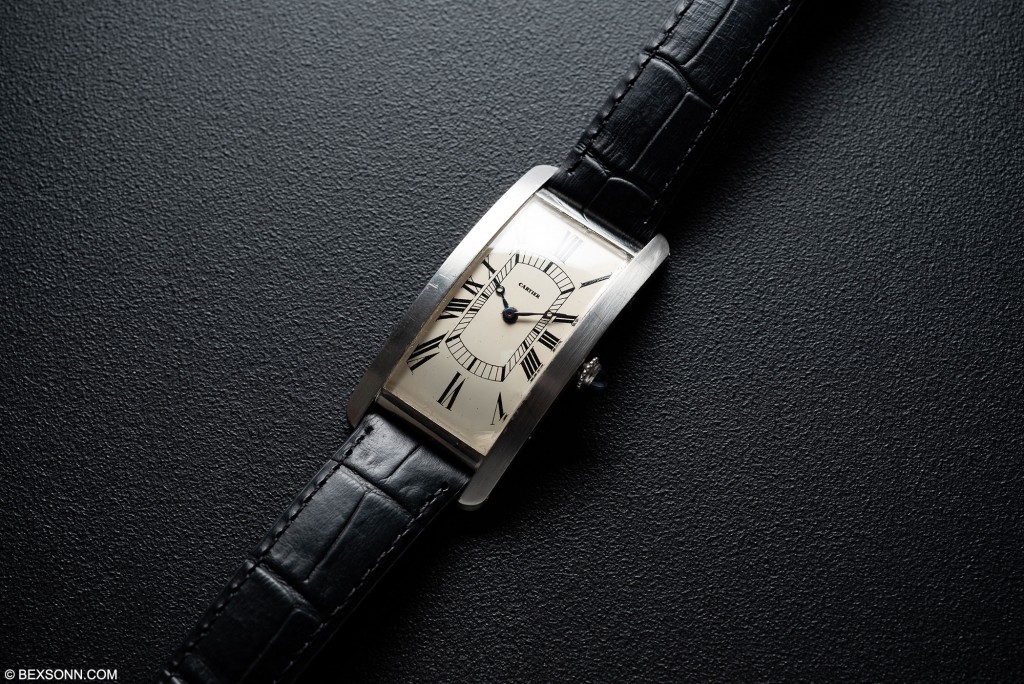 It is impossible to think about the wristwatch and not mention Cartier, after all, it was Louis Cartier who revolutionised the watch industry and commercialised the wristwatch. After the successful launch of the Santos-Dumont in 1911, Louis Cartier embarked upon a quest to create another wristwatch. It was in 1917, that the world first laid eyes on the Cartier Tank, one of the most iconic designs in the watch world. In 1921, Cartier started the production of the Tank Cintrée, which was later called the Tank Normale, which this example is one of the first variations of. 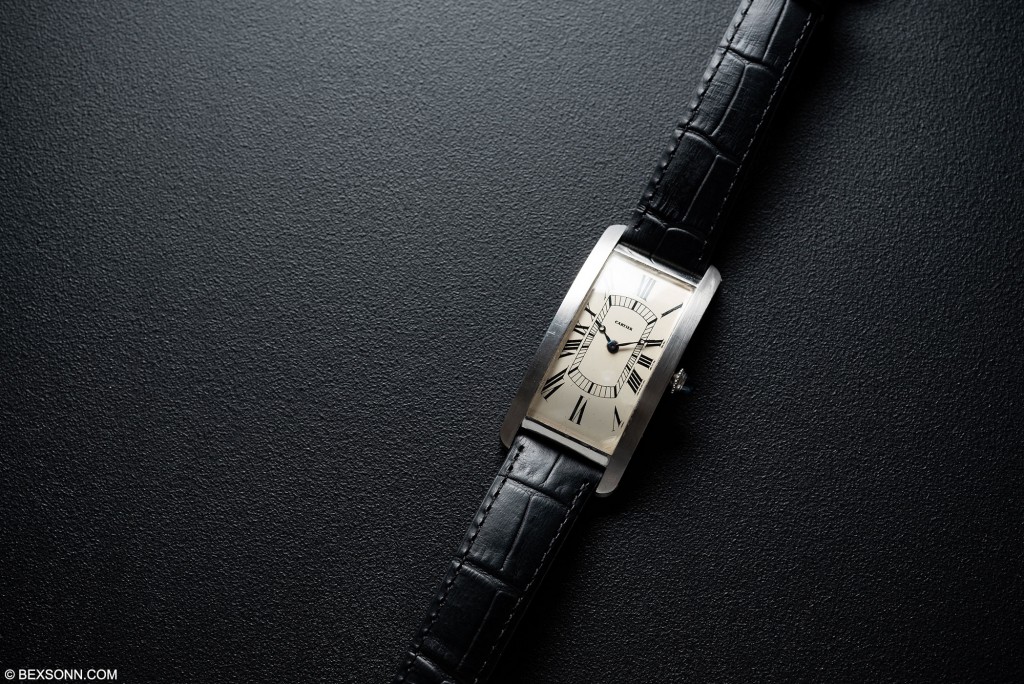 The Tank Cintrée differs, somewhat, from the original Tank. The Tank was square and while the Cintrée may appear to be an elongated version of the Tank, the trait that brings it into its own, is the entirely curved case, which appears to mould to the wearers wrist. This shape made it possible for Cartier to be a bit more generous with the proportions – hence the Grand Tank Cintrée you see before you. Furthermore, wristwatches back in the early 1920s were considered to be rather eccentric, so seeing a wristwatch such as this must have been quite something. Yet here is this 1929 Tank Cintrée that was made entirely from Platinum, produced in a small series and was the largest version made at the time. Evidence at just how ahead of the game Cartier were and also how ground-breaking the Cintrée was at the time.

For more lot information on The Sotheby’s London Watches Auction that will take place on the 25th September at their London HQ at 2pm, visit the official Sotheby’s website to view the entire catalogue.