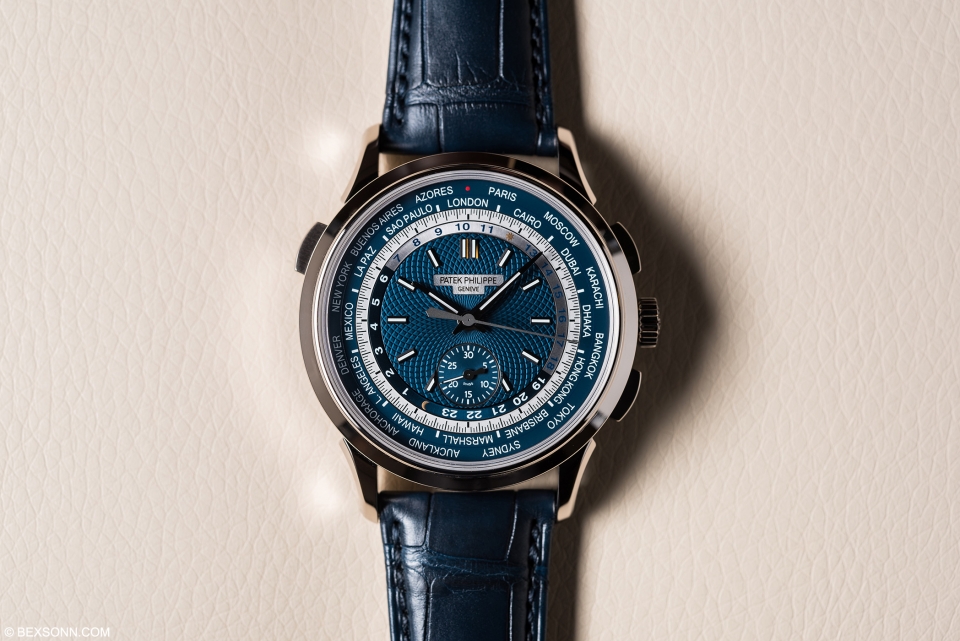 It’s a new year, where there is bound to be an onslaught of timepieces released/introduced and what not. However, today I thought we’d look at a forgotten timepiece of 2016 that we perhaps weren’t completely ecstatic about. We’ve almost become accustom to Patek releasing timepieces that aren’t exactly quintessential Patek; the 5524G of course comes to mind. This 5930 World Time Chronograph fits into that category, why? While it combines two of our favourite complications: the chronograph and the world-timer function, which hasn’t been executed in a particularly Patek manner.

That said, this combination of compilations is not foreign to Patek, it is essentially similar to the 5524G, which in a fashion was loosely based on a 1920’s pilots watch from the archives and the same is true for this World Time Chronograph. The original was a unique piece 1415 HU, as seen in the image below. 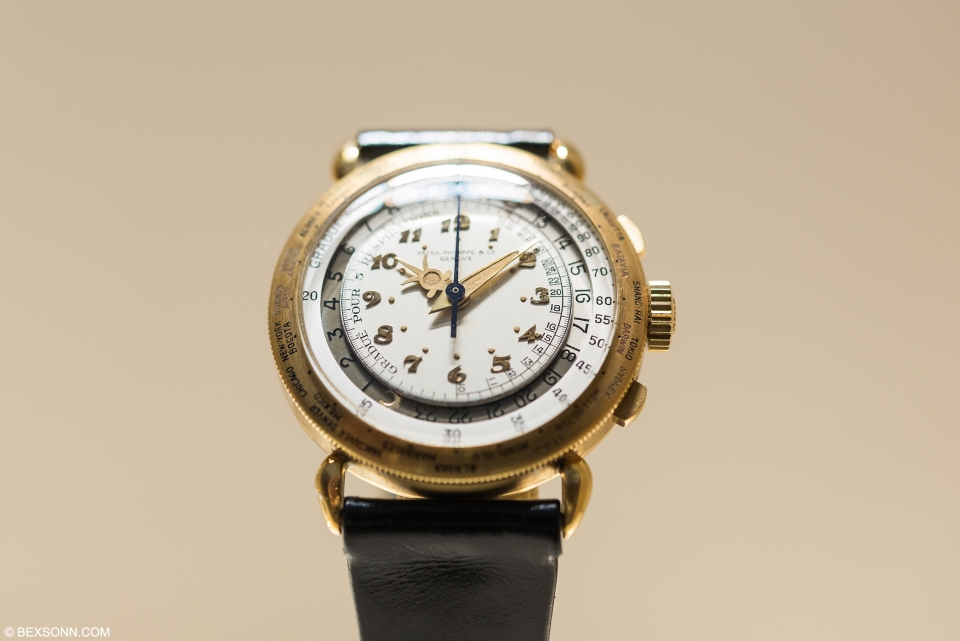 The one-off World-TImer Chronograph ref. 1415 HU – likely made for a travelling physician? (Image taken during the Patek Art Exhibition in 2015)

As mentioned, while the marriage of these two complications is nothing particularly new to Patek, the Ref. 5930 model will of course be a timepiece that is in Patek Philippe’s regular collection. It makes use of the new calibre CH 28-520 HU manufacture movement which combines an automatic chronograph featuring column-wheel control and a vertical clutch with the World Time module. 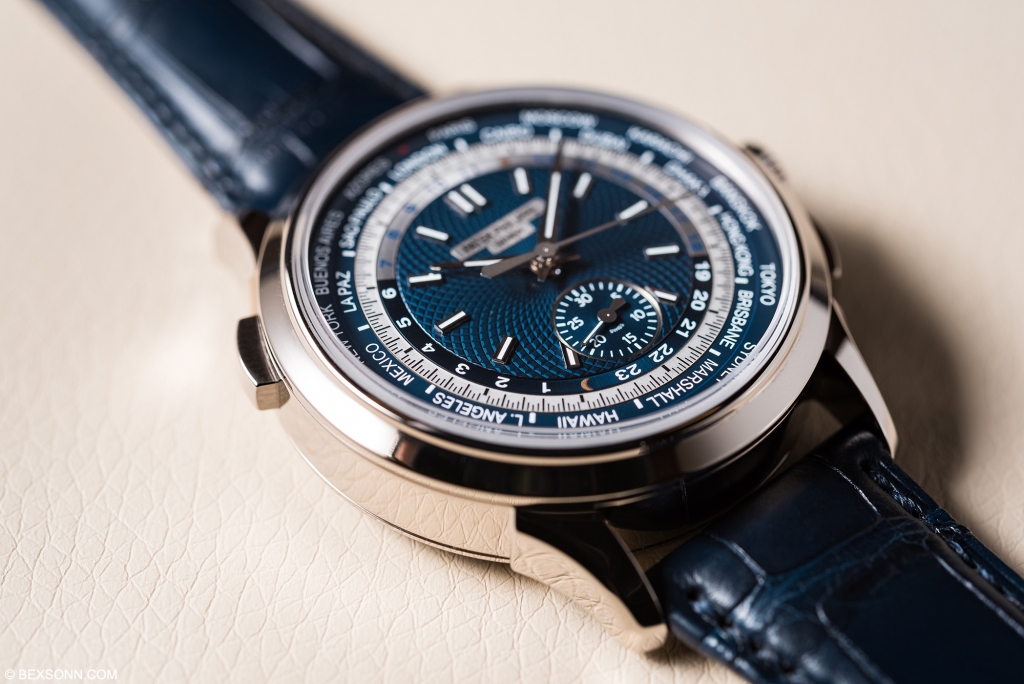 Activated by a pusher at 10 o’clock, this advances the hour hand and the two World Time scales in one-hour increments. Though Patek have lauded this calibre as new, it is not completely surprising that it is in fact a combination of the movements from the 5990 and 5130, making it extremely thin, 4.9 mm to be exact, which makes it the world’s thinnest world-timer chronograph. And if that wasn’t enough the chronograph complication is a flyback. 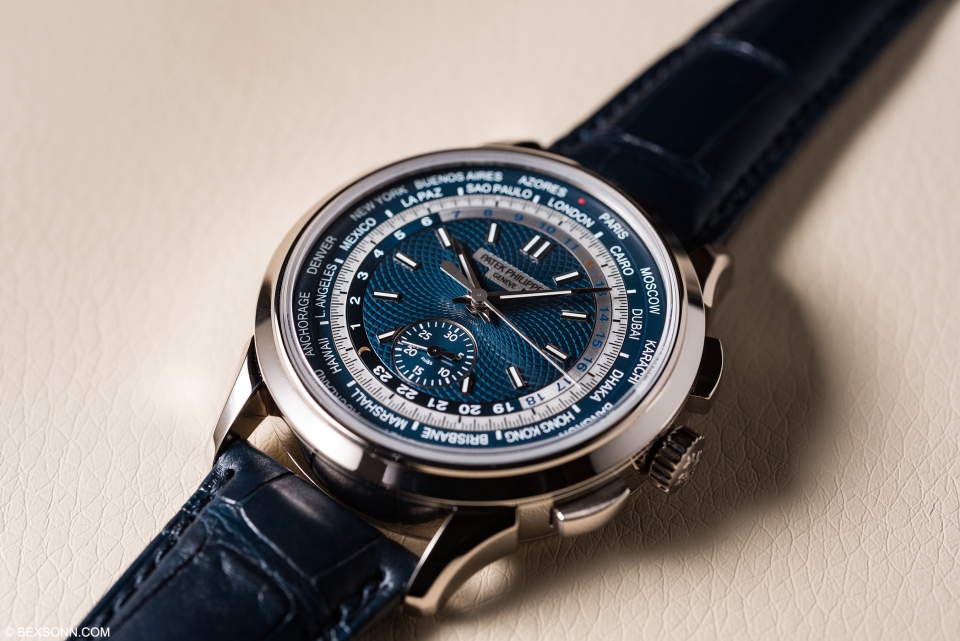 Keeping the new ref. 5930 as classical and elegant as possible, it features a 39.5 mm 18-carat white-gold round case, with winglet-style strap lugs and rectangle pushers – a trait seen in Patek watches in the 1940s and 50s. Combining these two design characteristics is indeed a conscience nod to the past. That said, when gazing upon the dial you can’t help but feel that the 5930 takes on a little bit more of a sporty look. 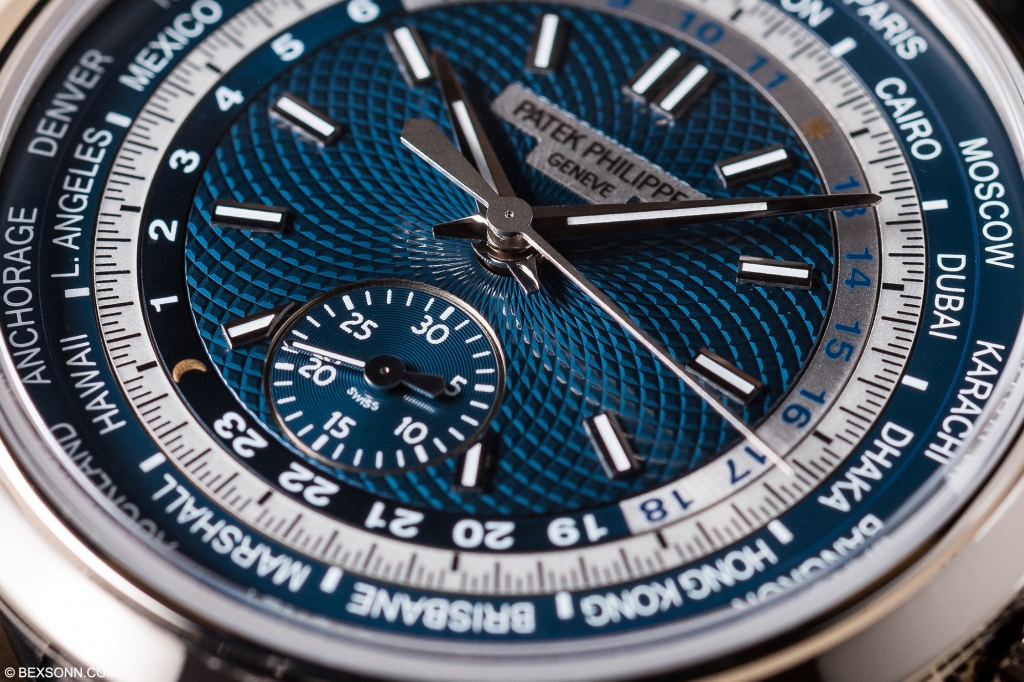 The new Ref. 5930, with its blue and silvery dial that structures the displays of local time, the other 23 time zones, and the chronograph functions in an exemplary manner to assure instant legibility at a glance. The outermost scale is a blue disc with the city names that represent the 24 time zones. It adjoins the white chronograph scale with fourth-of-a-second graduations. An adjacent 24-hour ring with bright/dark zones as well as sun and moon symbols, doubles as a day/night indicator for the World Time readings. As in all Patek Philippe World Time watches, the dark blue centre is dedicated to decorative artistry and manually guilloched.

So, I’ve skimmed over the nitty-gritty of the 5930G but when you mull over the aesthetics of it, it all seems a little confusing to say the least – perhaps a reason we over looked it last year. As already mentioned, it features what Patek have explained as a classic inspired case and you know what, there is no denying its classical elements. However, the blue dial, while supposedly “classic”, says sporty. Moreover, coupled with a blue strap only further increases its sportier idiosyncrasies. 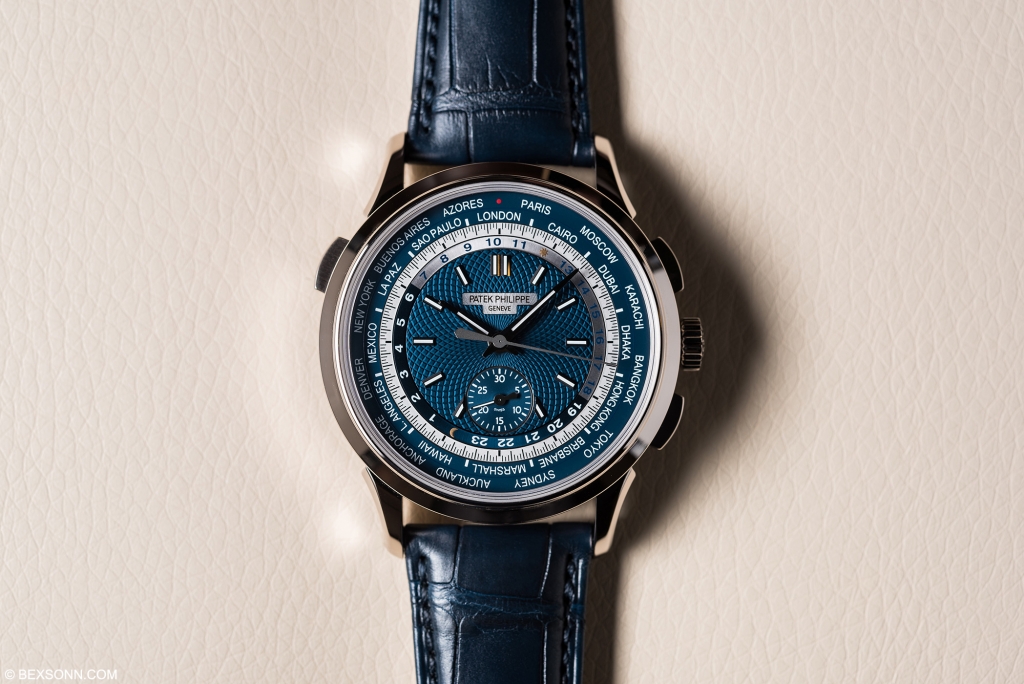 But and it is a big but, it is the first time Patek is adding a world-timer chronograph to its catalogue and this is quite import. We all know that Patek Philippe timepieces are collectible but some of the most collectable timepieces they have ever made are the oddities or the firsts. Look at the 5524G for example, Patek’s first ever commercially available Pilots watch, with Travel Time function, yup – it has a waiting list.

It must be said, while the 5930 has somewhat captured the design of the 1415 HU, albeit it in a sportier way that has divided opinion (something we’ve been seeing all too often of late), it will still be successful. While this perchance won’t have the same impact as the 5524G – though by now I could be wrong – there is no doubt it will be collectible, if not now then at some point in time.