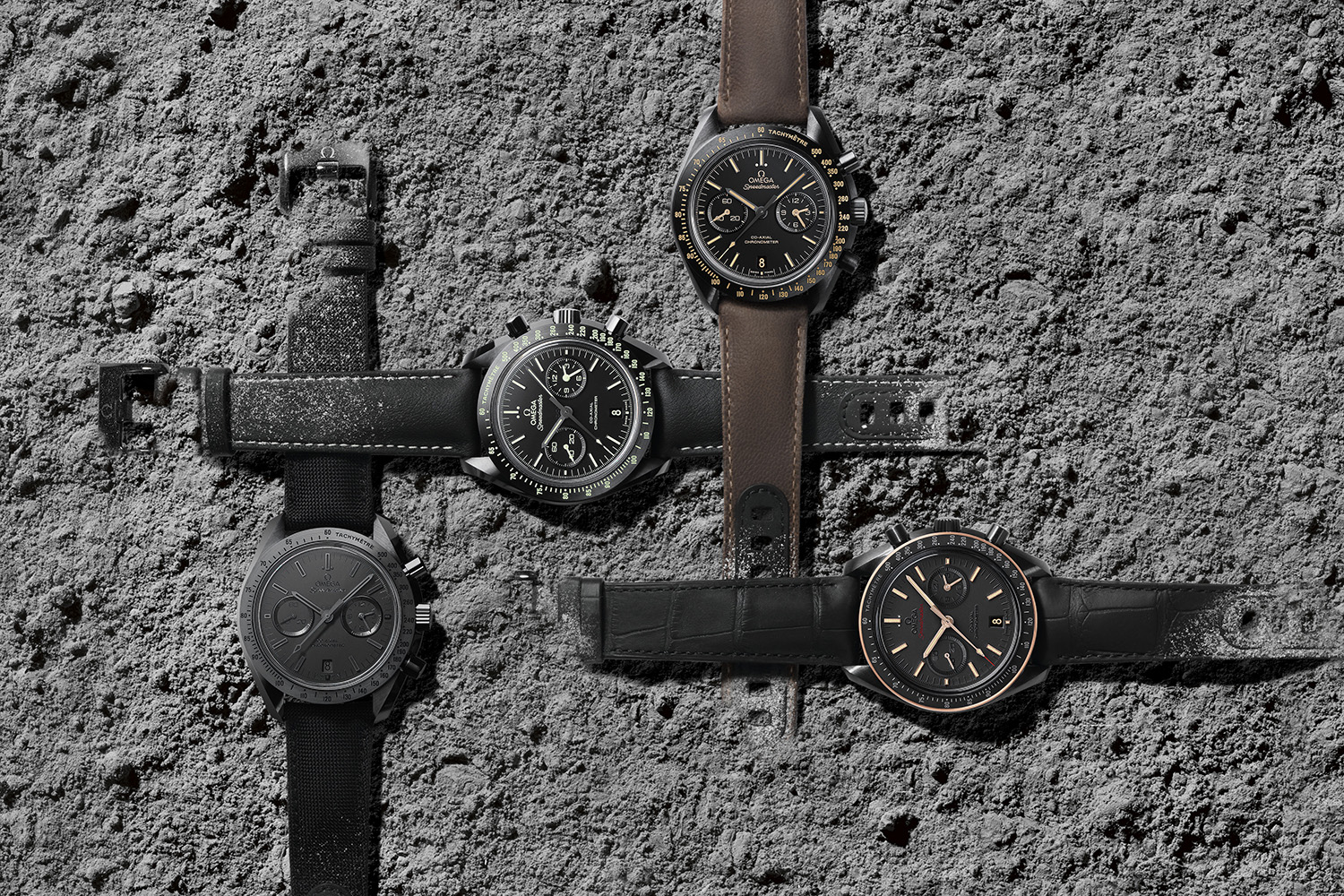 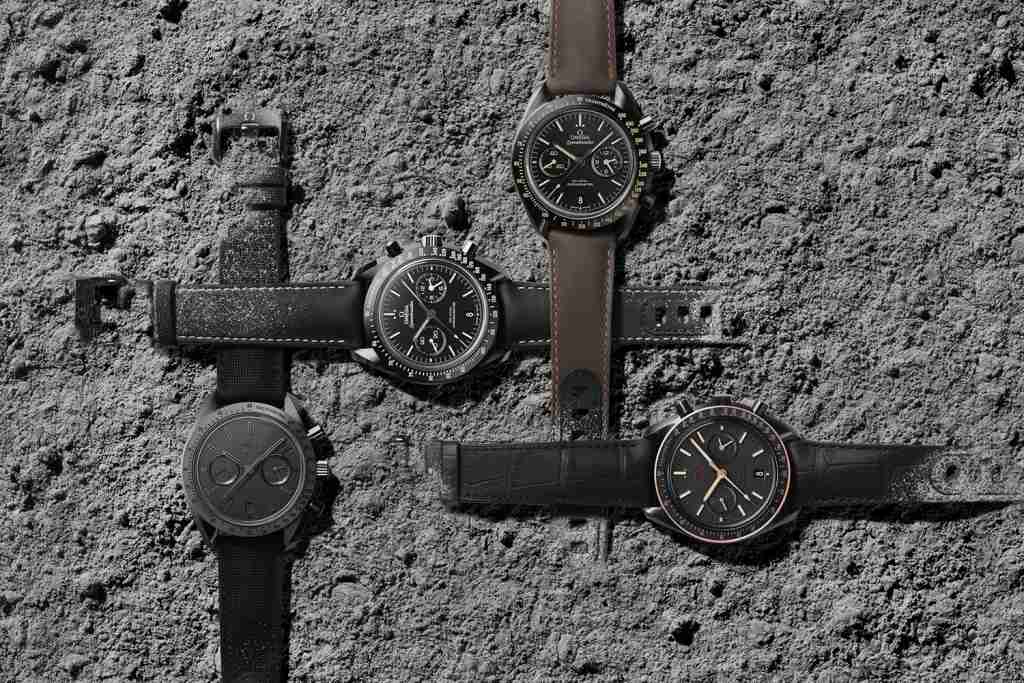 It has been said that it was the Apollo 8 astronauts that inspired the first all-black, ceramic Speedmaster Dark Side of the Moon but it is the mystique of the Earth’s nightlight and its ever-changing yet constant presence that has spurred the creation of four new Omega timepieces that are now part of the collection: Black Black, Sedna Black, Pitch Black and Vintage Black. 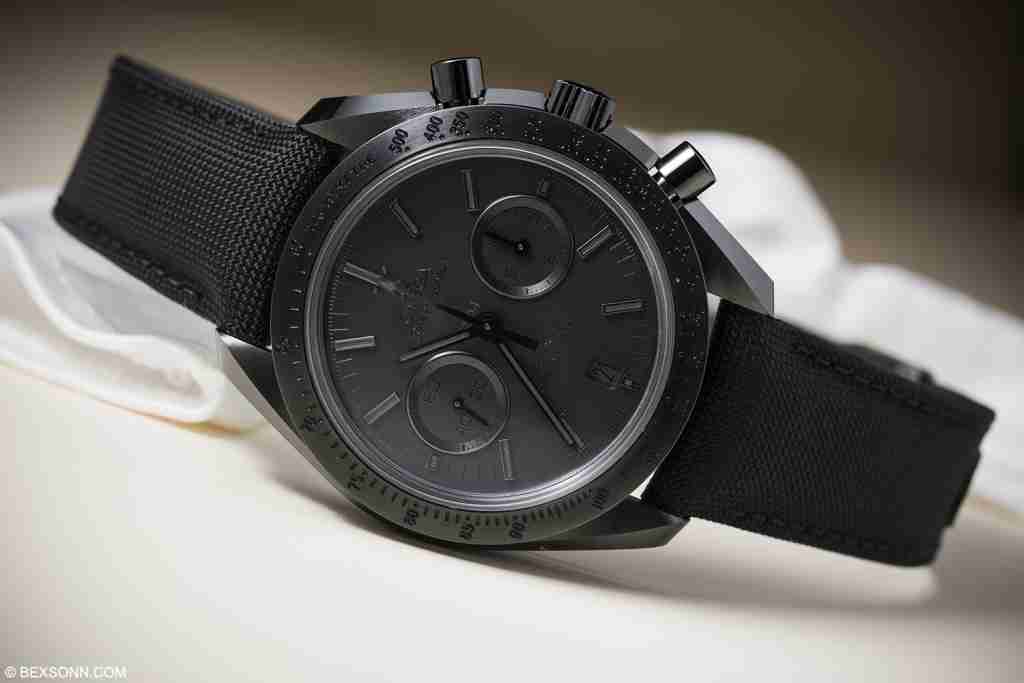 The Speedmaster Dark Side of the Moon “Black Black”(that is incredibly difficult to photograph) has a polished and brushed black ceramic case, a matte black ceramic dial and a black deployant clasp. The clasp is made up of two materials, the cover is made from ceramic and the fold over components are titanium, which have been given a special treatment that Omega call ceramisation, making sure it is light but yet still carries on the same black ceramic aesthetics. The Black Black comes on a black-coated nylon fabric strap. Giving this model its nickname are its brushed blackened Moonwatch-style hands and blackened applied indexes – all of which are coated with black Super-LumiNova. The accustomed sub-dials at 3 and 9 o’clock are also matte black and the black ceramic bezel has a black lacquered tachymeter scale. 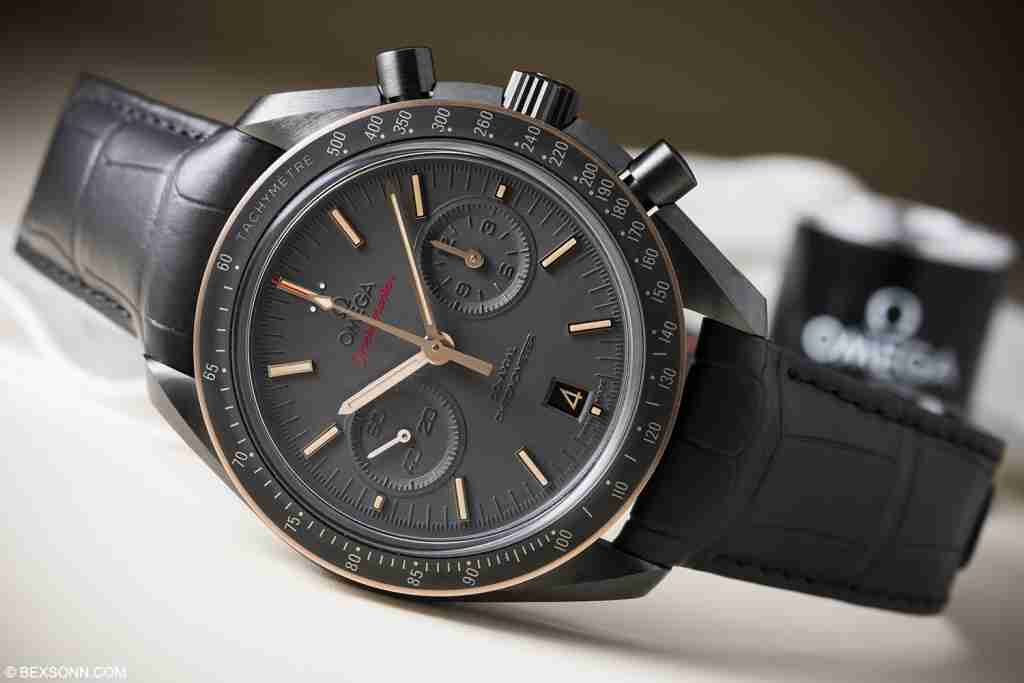 The next piece in the collection, combines Omega’s ceramic technology with its exclusive rose gold alloy, the Speedmaster Dark Side of the Moon “Sedna Black” has a completely brushed black ceramic case with an 18K Sedna™ gold bezel ring which matches the 18K Sedna™ gold applied indexes and hands. The marks on the matt grey dial have been created using laser ablation, the same technology deployed on the 45th Anniversary Apollo 11 Speedmaster introduced last year. “Vintage” Super-LumiNova coats the central hour, minute and gold-plated chronograph seconds hands as well as the indexes and the two dots at 12 o’clock. This timepiece is presented on a black leather strap with a brushed ceramic depolyant clasp. 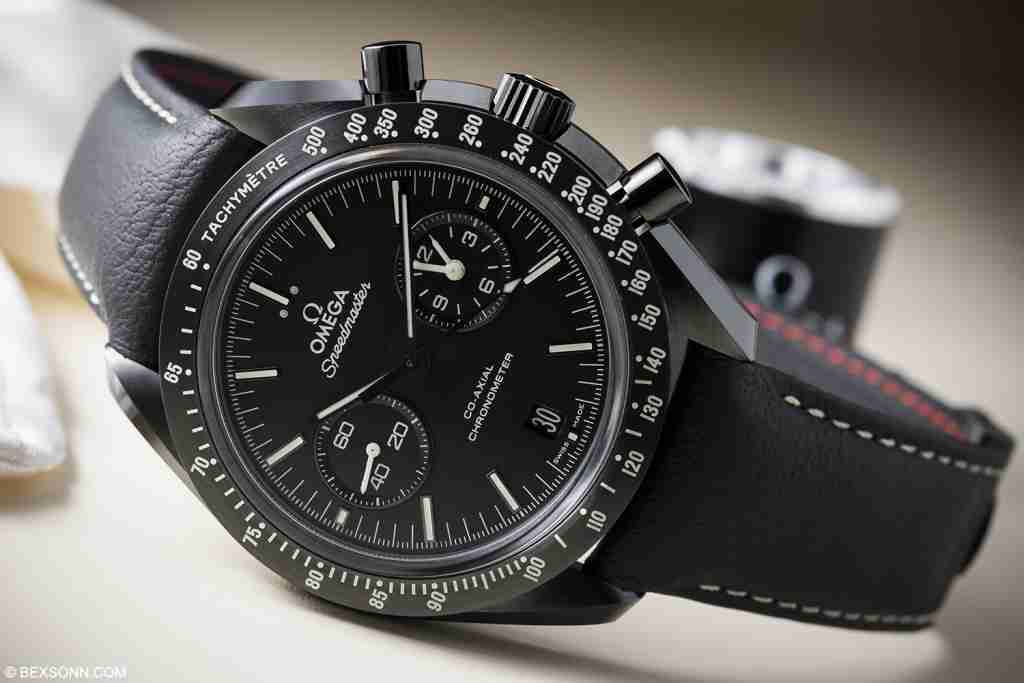 Another timepiece from the collection is this Speedmaster Dark Side of the Moon “Pitch Black”, is distinguished by the Super-LumiNova that coats the indexes on its matte black ceramic dial, thanks to the laser treatment. The ceramic timepiece has a polished and brushed case and a brushed ceramic bezel with a tachymeter scale also in Super-LumiNova. The matt black sub-dials have varnished hands. The “Pitch Black” is presented on a black leather strap with ecru stitching and a ceramic depolyant clasp. 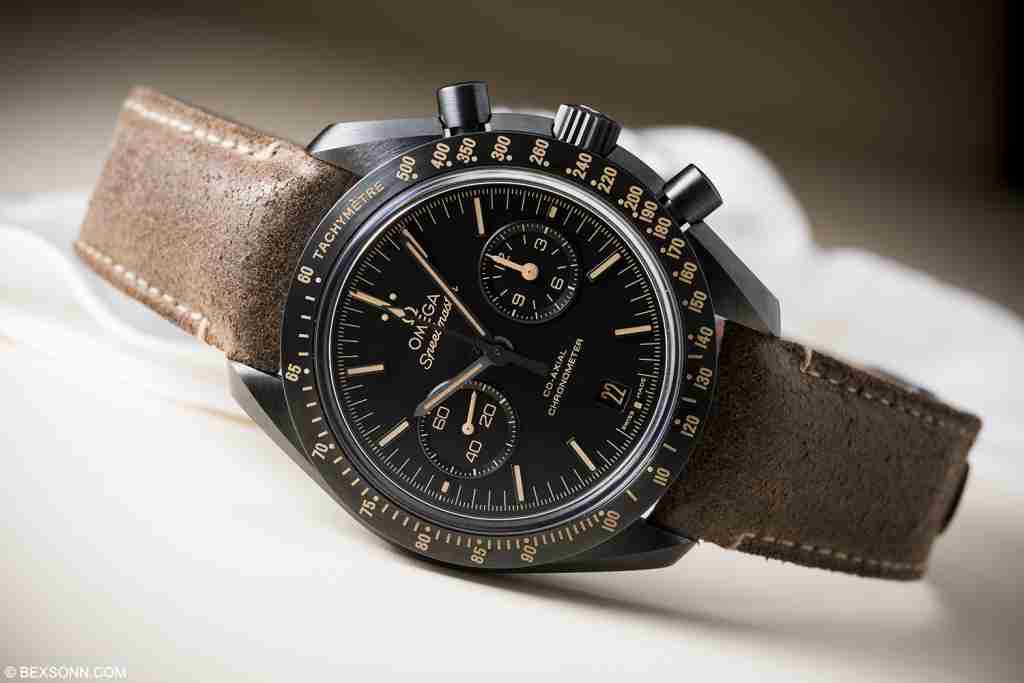 The Speedmaster Dark Side of the Moon “Vintage Black” stands out with brown indexes and hands, which complement the “vintage” Super-LumiNova. The brushed ceramic bezel has a “vintage” Super-LumiNova tachymeter scale and, as with the other new models in this family, the matt ceramic dial has been created using laser technology. The “Vintage Black” has blackened central hands and varnished brown hands on the sub-dials at 3 and 9 o’clock. Another distinguishing feature is the brown leather strap, which gives this innovative timepiece a more classic appearance. 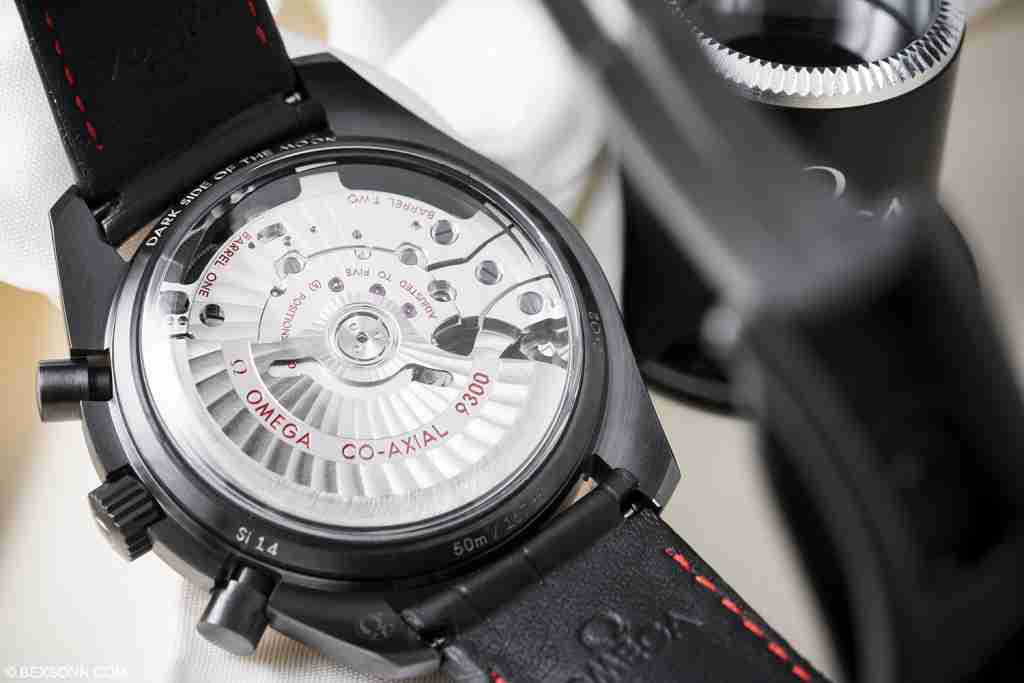 In 2013 when Omega announced the Dark Side of the Moon, it was a well-received novelty but I’m not so sure this will be greeted with the same amount of anticipation? The thing is, the DSotM has always been adored by the masses but the introduction of the new collection does two things. 1. It gives those who want to own a DSotM a greater headache, because of the choice of selection now available to them and 2. Some may believe that Omega have gone too far? But they say variety is the spice of life and this I believe is what Omega have achieved with the Dark Side of the Moon Collection. 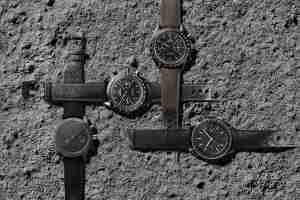 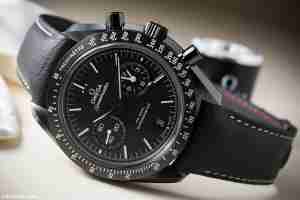 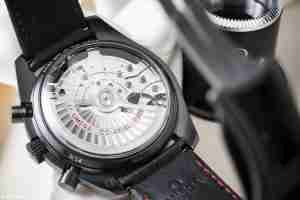 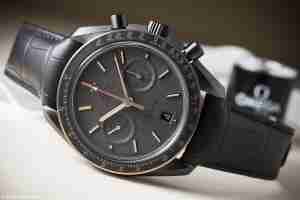 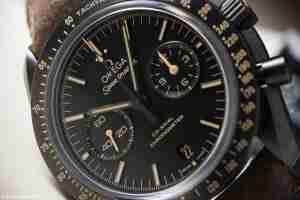 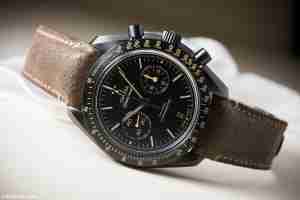 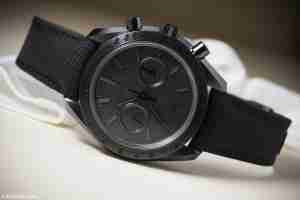