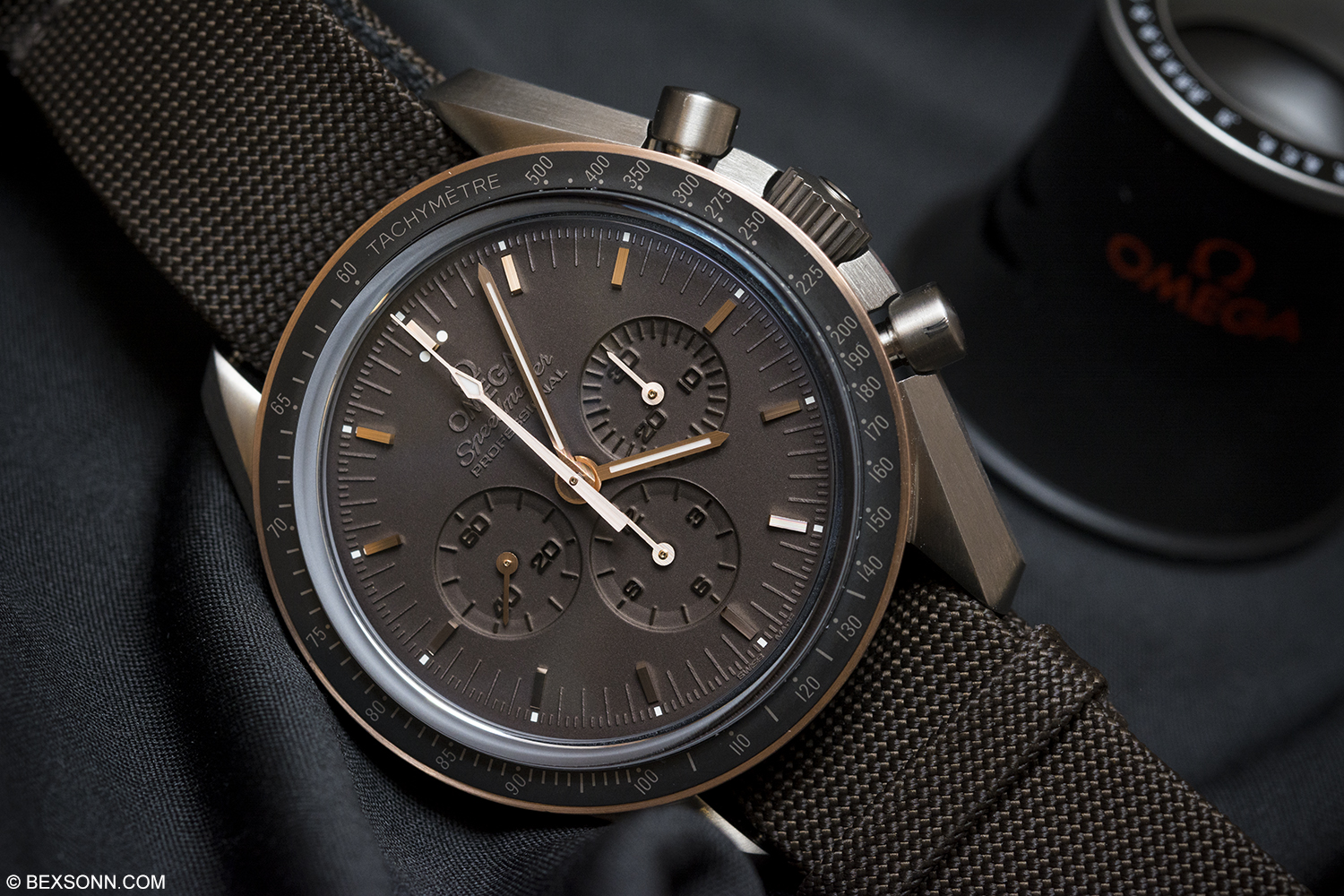 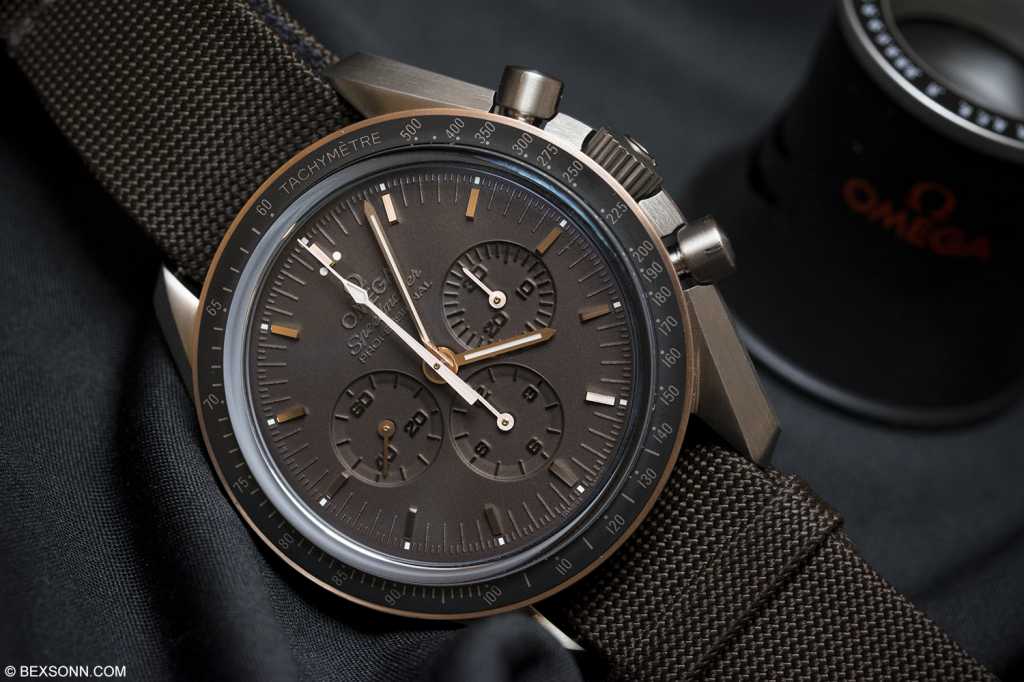 Speedmaster Apollo 11 45th Anniversary Limited Edition:  For those of you who may not be aware the Speedmaster is NASA’s first choice of wrist wear when conducting space shuttle missions.  One of the most important space flights was the Apollo 11 mission, this was because in July 1969 astronauts Neil Armstrong and Buzz Aldrin stepped onto the Moon for the first time, creating history. Strapped around Buzz Aldrin’s spacesuit as he leapt onto the Moon was an Omega Speedmaster Professional. Since this lunar landing, Omega have celebrated with anniversary editions to commemorate the occasion every 5 years ever since and this year at Baselworld 2014, we were there when they unveiled the 45th anniversary limited edition.

It was no secret a Speedmaster 45th edition would be introduced but what it would look like, nobody knew. To our surprise the new Apollo XI features a titanium case, a black PVD dial, the use of Omega’s patented 18K Sedna gold, a matte black ceramic tachymetre scale and it comes on one of Omega’s new NATO-inspired straps. 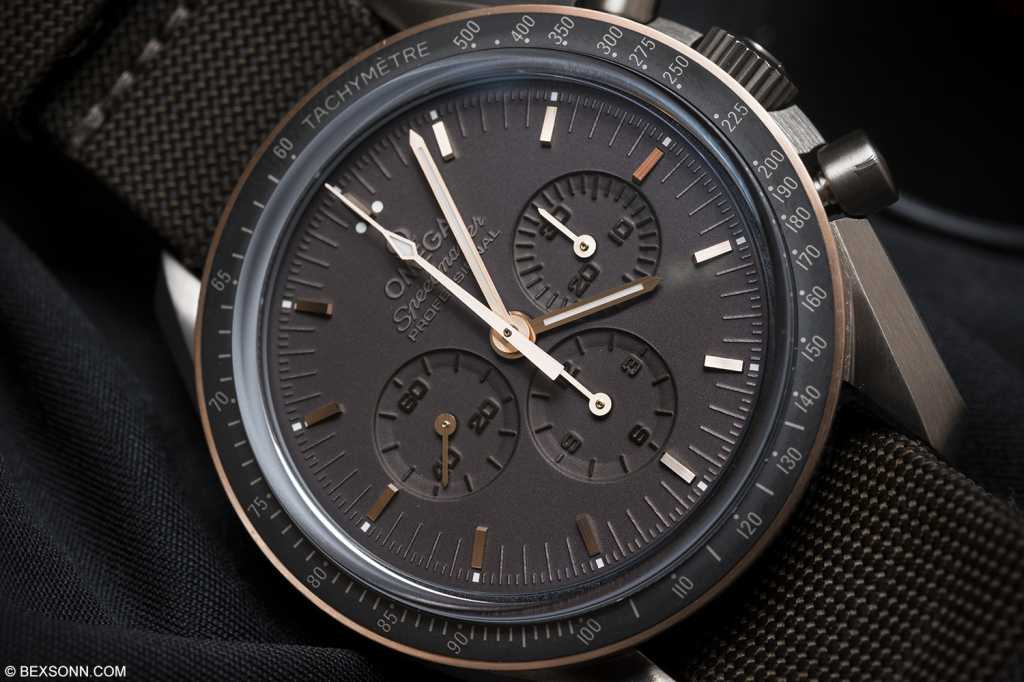 First off, probably the most striking feature of this new Speedmaster is the PVD and Sedna gold dial. The dial is in fact produced using a very special laser which creates the iconic Speedmaster elements by removing the material which surrounds the Omega logo, Speedmaster Professional inscription, as well as the minute makers and sub-dials numerals. To amplify the PVD dial Omega have used 18K red-gold for the indexes (which have been angled to give the dial more depth) and hour, minute, seconds and sub-dial hands. The only exception is the central chronograph hand which is red gold-plated. Super-LumiNova has been used on the hour, minute and chronograph seconds hands as well as the hour markers and two dots at 12 o’clock. This method, used to create the dial, gives it a beautiful grey-ish lunar effect, furthering the Apollo 11 45th’s link to the lunar landing.

Then there is the case; made from completely brushed grade-2 titanium – it measures like its predecessors 42mm in diameter and although titanium is nothing new to Omega and we’ve seen it used in the Speedmaster (Z-33 which used the more common grade-5 titanium), it is the first time it has been used on the a-symmetrical Speedmaster Professional. Grade-5 titanium as mentioned before is more commonly used when it comes to timepieces, this is due to the fact that it behaves more like stainless steel but in this case the use of grade-2 titanium for the 45th anniversary Apollo 11 we actually think is a conscious one by Omega. You see, grade-2 titanium tends to darken more and over time builds up nice patina and we think it will start to match the colour of the dial. 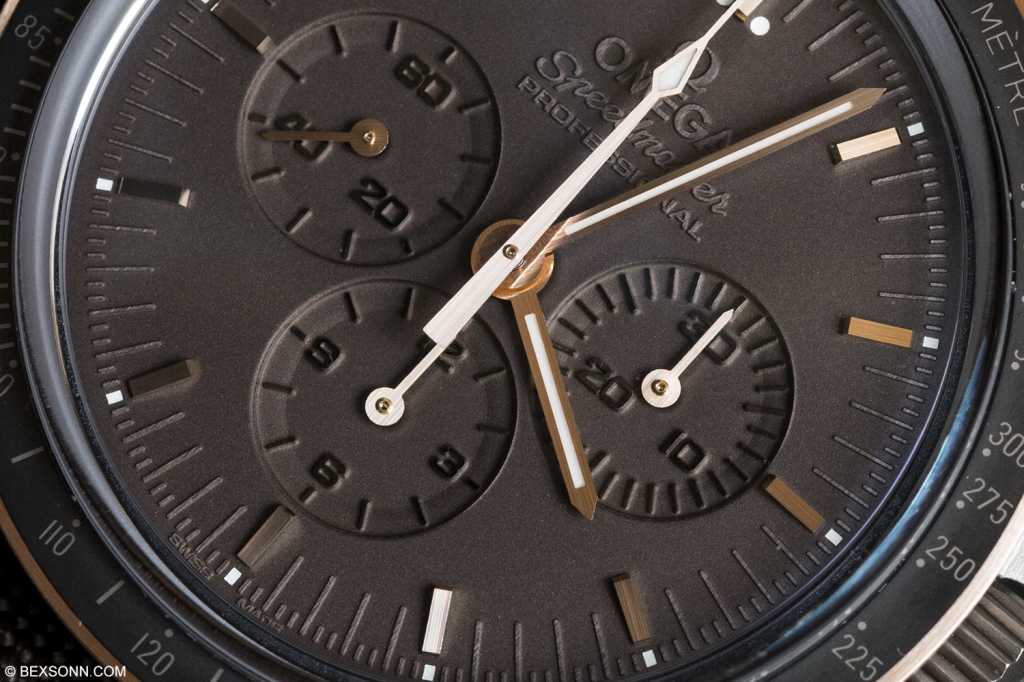 The use of Omega’s patented Sedna gold would probably have come as a little surprise to many but in fact, Sedna gold was used to highlight the colour of the material used on the lunar module. Some may think it makes the 45th anniversary Apollo 11 look a little feminine but it actually contrasts quite nicely with the PVD dial and as mentioned before over time will also contrast nicely with the titanium case.

Omega have used sapphire crystal, instead of the more widely seen Hesalite crystal, which only makes sense considering the use of a – sturdy – titanium case. On the reverse the caseback is embossed with the iconic Seahorse emblem and the outer circle bears the standard inscription, as well as the markings “APOLLO 11, 45TH ANNIVERSARY, LIMITED EDITION” and its edition number (xxxx of 1969 pieces in total). What you’ll probably notice is absent is the use of any eagles, neither on the dial nor on the caseback. 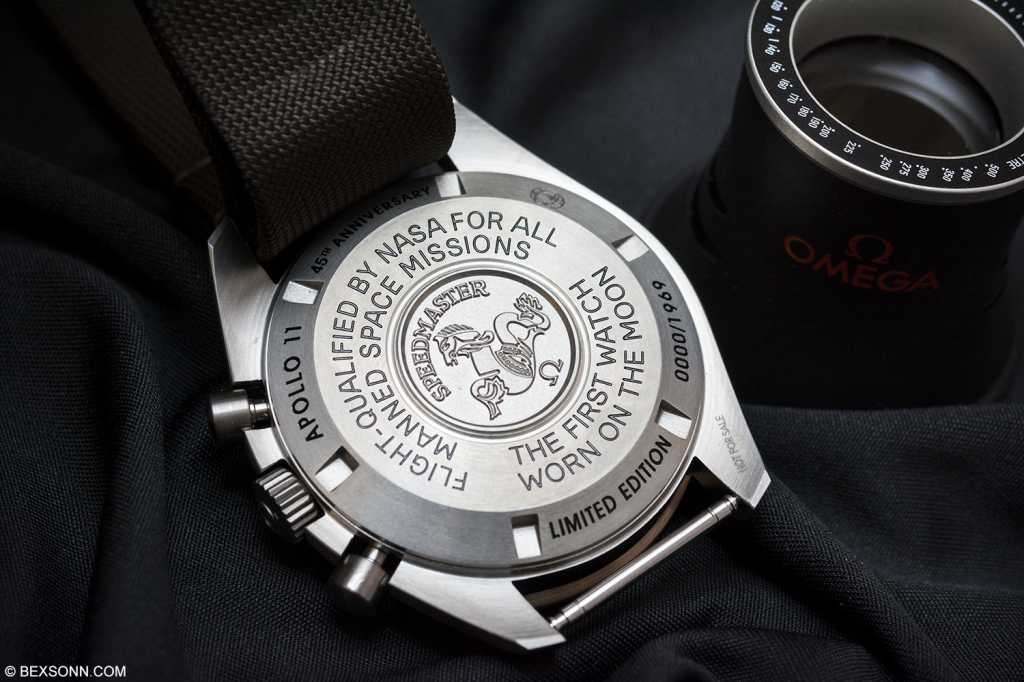 Beating away inside, as long as you’ve wound it up, is the manually wound people’s favourite Lemania based calibre 1861 (water-resistant to 50 metres) and although the Co-Axial calibre seems to be the mechanical movement of choice for Omega, I don’t see any reason why they will ever change this winning formula in the Speedmaster Professional Moonwatch. However, what would be interesting is if Omega created a new calibre 321 manually wound chronograph movement that incorporated a Co-Axial escapement? No, maybe not, this would probably only increase the price of an iconic, cool and affordable chronograph timepiece.

Lastly, probably another unexpected feature was the use of one Omega’s new NATO-inspired fabric straps. Which we think looks very classy and well made. These new straps are available in a range of colours and there is also a nice leather one too. The high-quality fabric used is lined and comes with a rather nice Omega clasp. The 45th anniversary Apollo 11 Limited Edition Speedmaster comes on a kind of grey-ish brown NATO which actually matches the dial and completes the look, and is also a great combination. 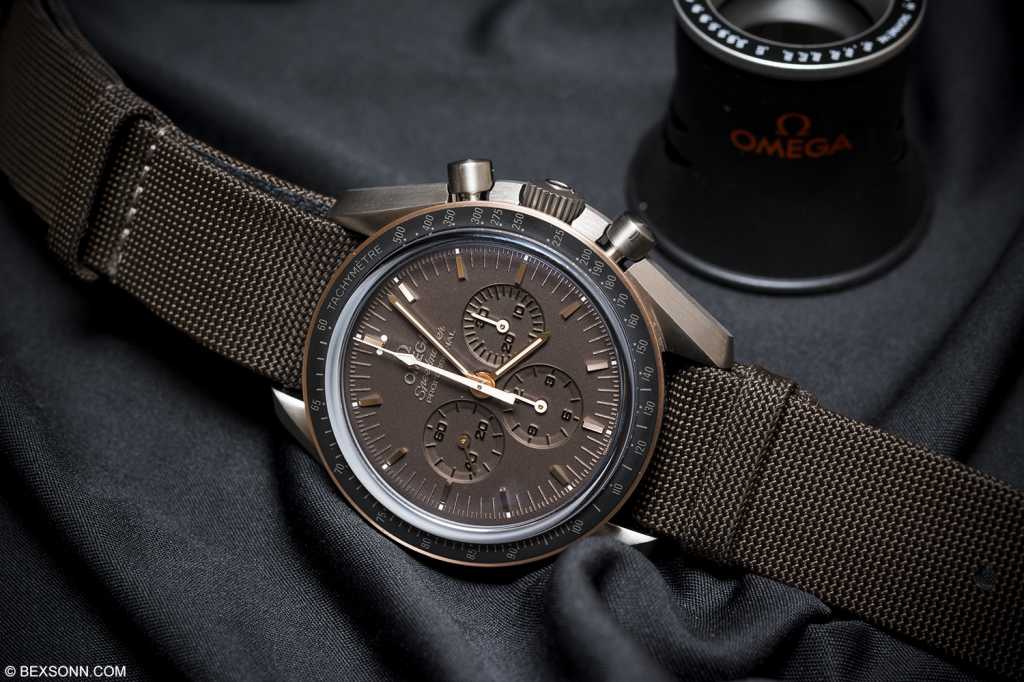 At first glance the 45th Speedmaster Professional Limited Edition does look a little underwhelming but when you look as the details, use of materials and just how cool the black PVD dial is – we think you’ll find it’s rather well-balanced. 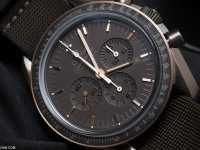 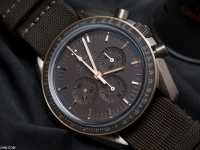 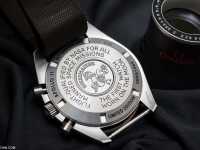 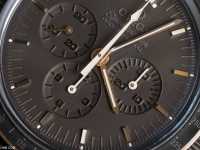 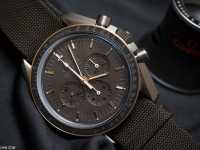 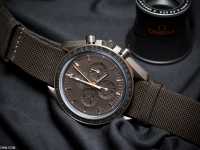