The Omega Seamaster 300: The Coveted Master of the 1957 Trilogy 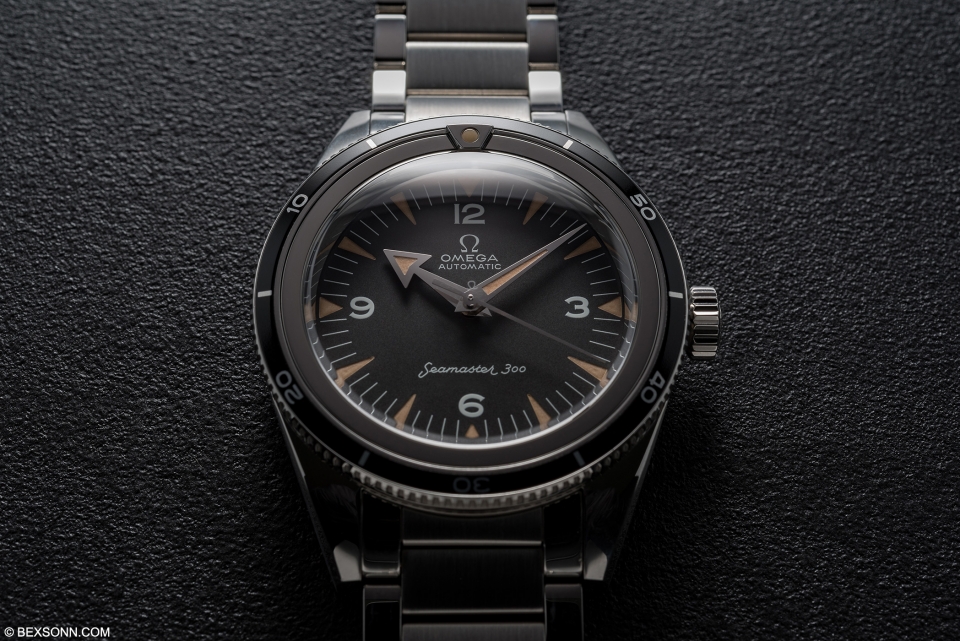 1957, the year that saw Omega release three watches that would go on to become not just famous but household classics among the watch collecting fraternity. The Seamaster 300, Railmaster and of course Speedmaster. These three watches all represented 3 various fields for use. The Seamaster, by virtue was destined for divers, the Railmaster, while perhaps not as clear, was made with scientists who worked in environments of high magnetism in mind and finally the Speedmaster, which was originally made with racing drivers in-mind but we all know where that story ends up. Being the 60th anniversary since all three watches were produced, Omega saw it fit to honour this trilogy by introducing a limited edition of all three examples. 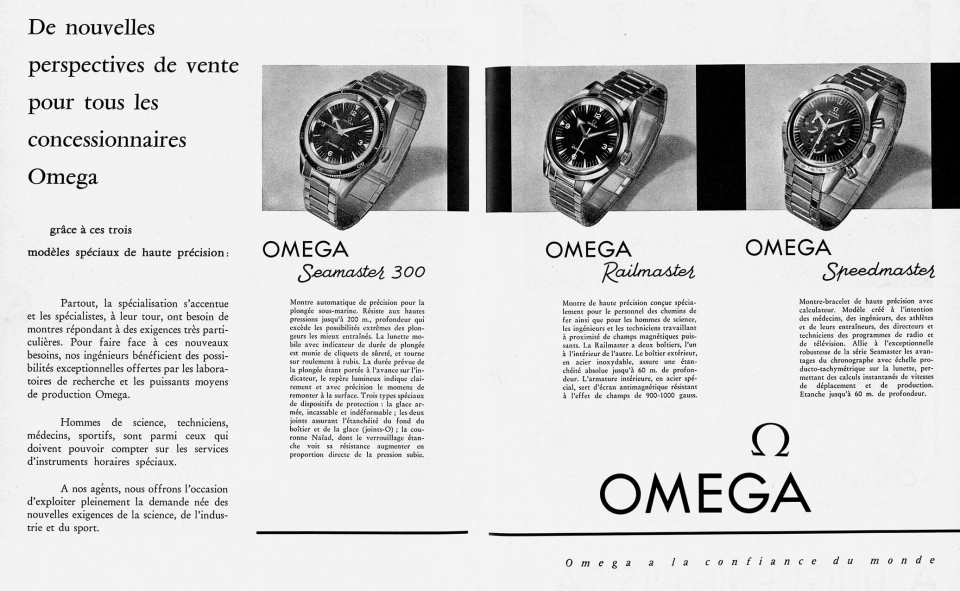 The Seamaster and Speedmaster are something of legends, even among those who aren’t as watch savvy as some. They are well-known pieces but the Railmaster is perhaps the least known piece amongst the three – hence the reason we posted this in-depth article right here. However, the 1st execution Seamaster 300 is perhaps more sought after than the Railmaster, however, the Speedmaster takes the limelight in the rarity, value and grail department.

The original Seamaster 300 ref. CK2913 was introduced in 1957 but it is interesting to note that while it bore 300 on the dial, it was only water-resistant to 200 metres. The story goes that it should’ve been water-resistant to 300 metres but at the time, the testing equipment used could only measure a depth of 200 metres – whether this is factual or not is unknown. However, one ingenious design from the folks at Omega was the Naïad crown, a subject I shall get to a little later in this article.

Beating away inside the Seamaster 300, was Omega’s tried and tested, hassle free, cal. 501. Known as the mother of all Omega diving watches, the Seamaster 300 was pretty much Omega’s answer to the Rolex Submariner and aesthetic similarities can be seen. However, the Seamaster 300 never really got the fame the Submariner received but among its faithful fans it is an absolute gem. In 1960 the Seamaster 300 received a new case reference of CK14755, however, this time inside was the automatic cal. 552 but the Seamaster retained its initial looks. In 1962 the CK14755 was replaced by the ref. 165.014 ST, which also introduced Omega’s new reference numbers, though this time round the ‘Broad Arrow’ hands had been replaced with straight hands, which kind of took away some of the initial impact of the Seamaster 300. In 1964 the Seamaster ref. 165.024 ST was introduced and though it still sported the cal. 552, this was the point that the Seamaster would pretty much change forever, as the case had grown in size and now sported the twisted lug design, new dial and sword shaped hands. That is until a few years ago when Omega re-introduced the straight-lugged Seamaster again, however, it had grown in size and housed the new Master Co-Axial movement. And while it still oozed that vintage appeal, with the use of the much debated “faux patina” lume – I always personally found it just a tad too big. As mentioned, the very first Seamaster ref. CK2913 was introduced to be a divers much needed companion but it also became rather sought-after. It had all the attributes that any diver would need, packaged in a very stylish watch that later became iconic. The original’s unpretentious style has been carried over into the 2017 model. The indices have been filled with faux vintage Super Luminova, which many have frowned upon, however, I think in this instance it would have looked a little strange to see white or green lume. This faux vintage look is also carried over onto the “Broad Arrow” hands, which completes the overall vintage appearance, albeit induced. The dial of course sports 3, 6, 9 and 12 Arabic numerals, with triangles marking each of these hours and elongated arrows marking the rest of the hour marks. The dial features the old-style Ω, as well as text; these are the minute details collectors alike drool over (myself included) and it is this attention to detail that has made these trilogy pieces very special. The case has been carefully and expertly reproduced. Omega used a unique digital scanning technique for the first time, which provided the Swiss watchmaker with accurate representations of all three original watches. These minute cross-sections and dimensions, along with drawings of the original models, served as design templates for the new watches, with subtle updates bringing them into the 21st century, yet allowing them to remain true to the originals of 1957. The ever-fragile Bakelite bezel has been re-created using sturdier and modern material. All angles and facets have been polished to a mirror shine, with only the case sides being satin brushed.

The steel bracelet has of course been updated but has been done so tastefully, with brushed centre links and polished outer links, it is a comfortable fit. If there is one thing that was perhaps jarring about the original flat-link Omega bracelets it was their flimsiness, not to mention the stretchy links that are none too kind to men with hairier wrists. While this bracelet style is nothing new, it has been adapted to these new Trilogy models but even nicer, is the old-style Ω that has been used on the clasp and in true vintage fashion, slightly overlaps the bracelet. Again, Omega’s attention to detail goes even further. You’ll without doubt notice the signed crown sports the old-style Ω symbol again but look closer and what you’ll see is a symbol that looks like the Mercedes emblem. This is what is known by those in the know as a Naïad (meaning water nymph in Ancient Greek) crown but what exactly does this mean? The original Seamaster used a Naïad crown, which Omega also used on the Railmaster and Speedmaster. The crown improves on the water resistance of the watch as the pressure increases the crown seals further. The fact that Omega have even included this on these 60th anniversary pieces just displays their commitment in staying true to the originals. Turning the timepiece over you’ll notice there is a solid screw-down case back, with the hippocampus emblem and the arched Seamaster inscription. However, I think what is more important is what is beneath this case back. As mentioned, the original CK2913 made use of the self-winding Omega calibre 501. This faithful re-interpretation is powered by the automatic Omega Master Chronometer calibre 8806, which can resist magnetic fields of up to >15,000 gauss, with a power reserve of up to 55-hours – somewhat upping the ante from the original. For enthusiasts who have longed to own a CK2913, what Omega have created is something really special – while it’s not the original I think it is likely to be as close as you’ll ever get nowadays. The 60th anniversary Seamaster has been well executed and is in keeping with the true spirit of the CK2913. As already mentioned, Omega’s attention to detail is something to be admired. Even little things such as the Naïad crown and the use of the original Ω symbol in multiple places, including on the crystal, which won’t go unnoticed by collectors. Though, one detail that may go unnoticed is the slightly discoloured dial, which is ever-so-slightly tropical.

Of course, some may bemoan the fact the dial makes use of faux patina, to be honest I can’t see how the Seamaster or any of the other three pieces in the trilogy would’ve worked without it, so this conscious decision by Omega only makes sense. The use of an overlapping Ω on the clasp is a nice touch, that said, while the bracelet is super comfortable I can’t help but think it could’ve been a little more refined – it does add some serious heft to the watch. A slightly thinner bracelet would’ve been more in-keeping with the original but also would’ve helped to make wearing it an even more nostalgic experience. I can see many owners of this limited piece swapping out the bracelet, in favour of a leather or NATO strap. The new anniversary Seamaster is a well-executed reissue and so too are the others from this trilogy but I’m still drawn to the Railmaster for its pure simplicity. Of the original trilogy, the CK2913 has always been the piece that has been hard to find in unmolested condition, so this new piece does present the opportunity to own one, albeit a reissue but this does have its perks. 1) price and 2) modern robustness. When timepieces like these are reissued in limited quantities, this always arouses interest in the original, setting in motion an increase in their value. But this new limited edition Seamaster, like the Railmaster, presents an opportunity to own a slice of yesteryear at a much more moderate price.