Introducing the MB&F HM5 CarbonMacrolon, The Horological Machine that is more than meets the eye (Live Images and Pricing) 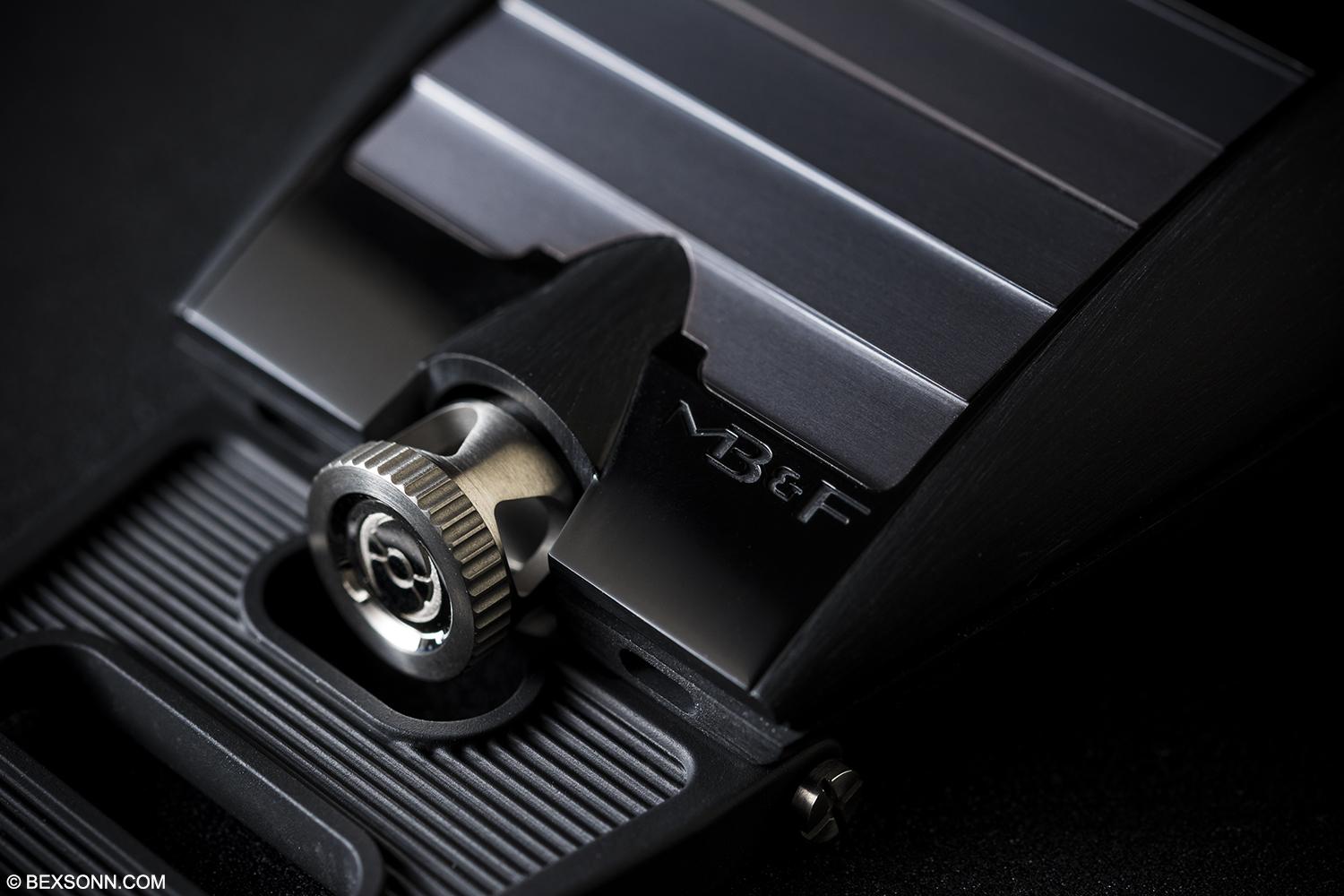 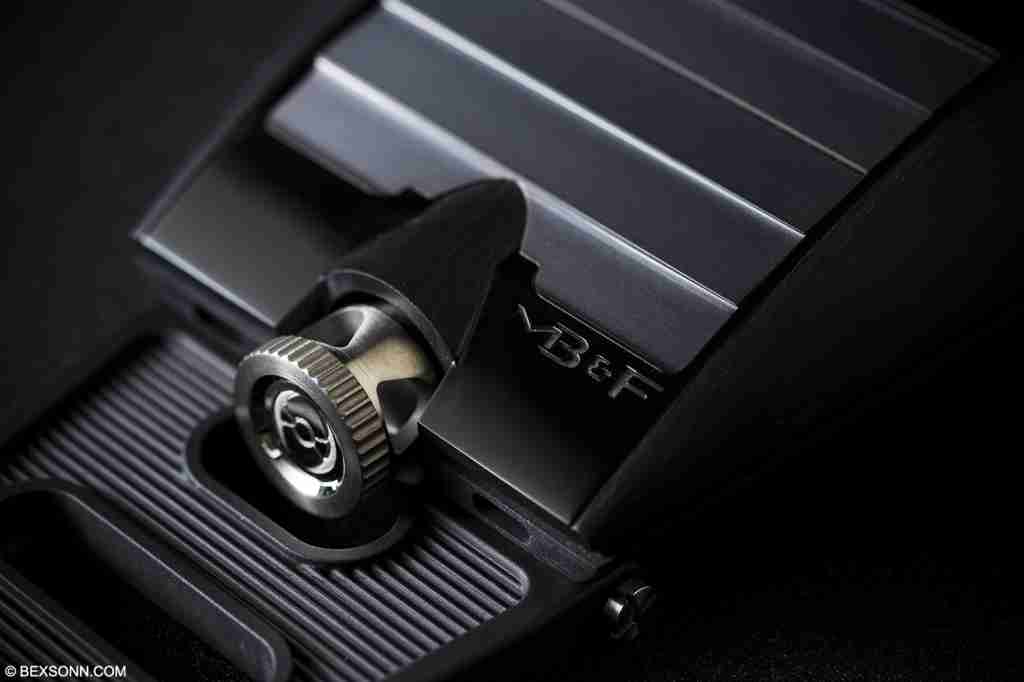 MB&F HM5 CarbonMacrolon: Max Büsser and Friend’s always seem to be able to entice their fans even further and they’ve done it once again. The Horological Machine N°5 was first introduced in 2012 and despite futuristic design, it was well received by many horology and car enthusiasts and it was easy to see why. With Max confirming a while back that they will focus on the format of HM (Horological Machine) then LM (Legacy Machine) and with the release this year of the LM101 their focus is now firmly on the release of the HM6. But before that all happens MB&F have given us a new take on the HM5, aesthetically and mechanically everything remains the same but like the HM5 RT we featured here, it is the use of materials that makes the difference and this time Max has truly added an innovative element to this timepiece in the form of CarbonMacrolon. 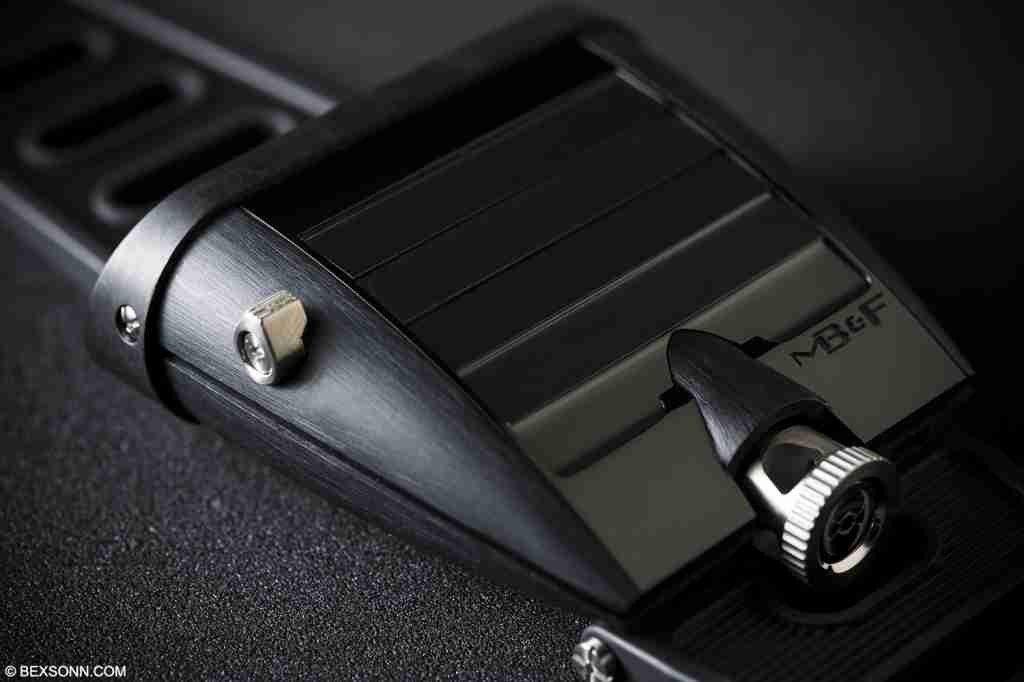 What is this material exactly? Well, Bayer introduced polycarbonate material Makrolon® in 1963, having a huge impact on the world. The material produced was virtually unbreakable and used in an extensive range of diverse applications including CD’s, medical devices, sunglasses, laptop cases, aircraft and fuselage components, and yep even your iPhone 5C. Polycarbonate has excellent heat resistance but is also very easy to mould, has long life use and is eco-friendly reusable. In a sentence, Makrolon® is one of the most versatile thermoplastics ever invented. But MB&F have taken this material to another level. Rather than take the easier path of adding a black PVD coat to the existing HM5 cases, as per usual MB&F took the more ambitious path and searched for a solid black material that could be polished and finished like metal, felt as solid as metal and was as hard as steel – no material with these characteristics existed.

Developed specifically for MB&F, CarbonMacrolon is a composite material composed of an anthracite polymer matrix injected with carbon nanotubes, which add strength and rigidity. Carbon nanotubes offer superior tensile strength and stiffness than traditional carbon fibre reinforcing. MB&F’s CarbonMacrolon is a solid black material that is heavy, hard, and can be polished and finished like metal. 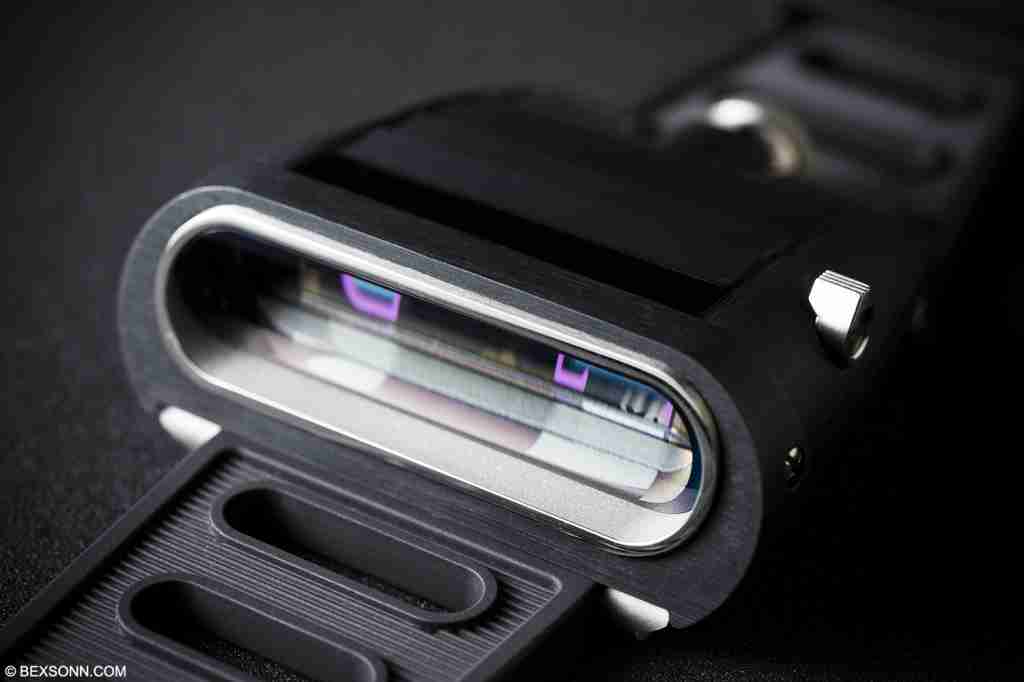 Like earlier versions the Horological Machine N°5 features a wedge-shape like case that took its inspiration from 1970’s sports cars; the Lamborghini Miura, which we managed to get a few shots of while at this year’s Goodwood Festival of Speed. The purpose of the louvres on these awe-inspiring cars was to restrict sunlight (and heat) from entering the near horizontal rear window. The functional louvres on HM5 do the opposite in that they open to allow light down onto the Super-LumiNova numbers on the hours and minutes indication disks to charge them. 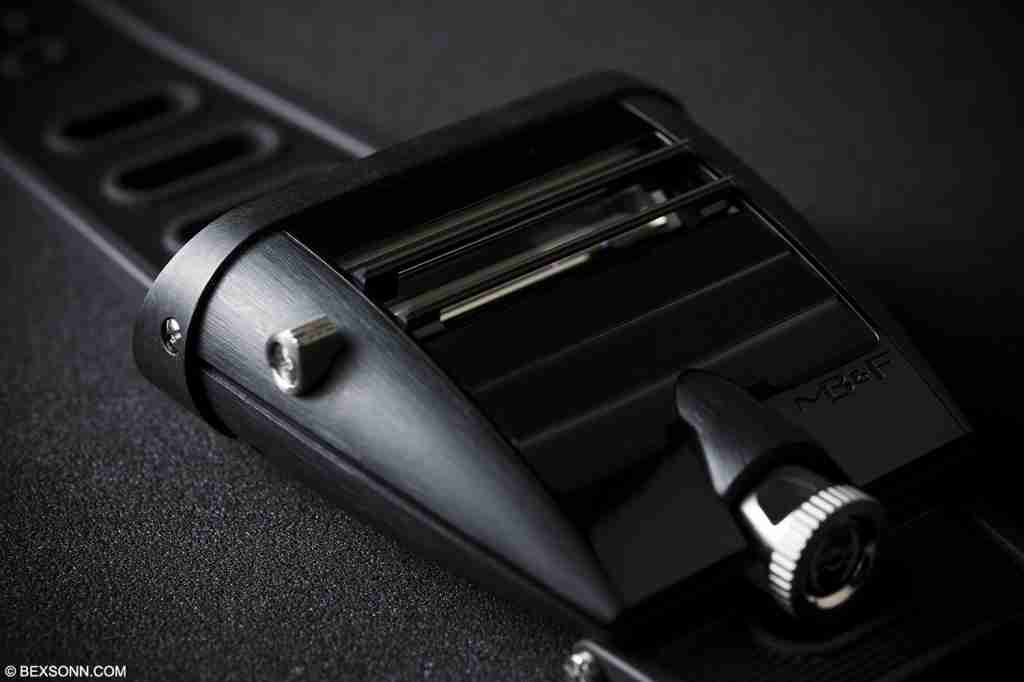 If you’ve read our previous articles on the HM5 you’ll know that the disks actually lay flat on top of the movement and through a wedge-shaped sapphire prism the time is reflected and displayed. Though this may sound simple, don’t forget because the time is reflected, the numbers are printed on the disks as mirror images so that they display correctly on the ‘dial’. Opening and closing the louvres also changes the dial’s light intensity. The louvres are opened and closed by a slide set into the side of the case and though we’ve seen this feature in previous HM5’s we never grow tired of seeing it in action. 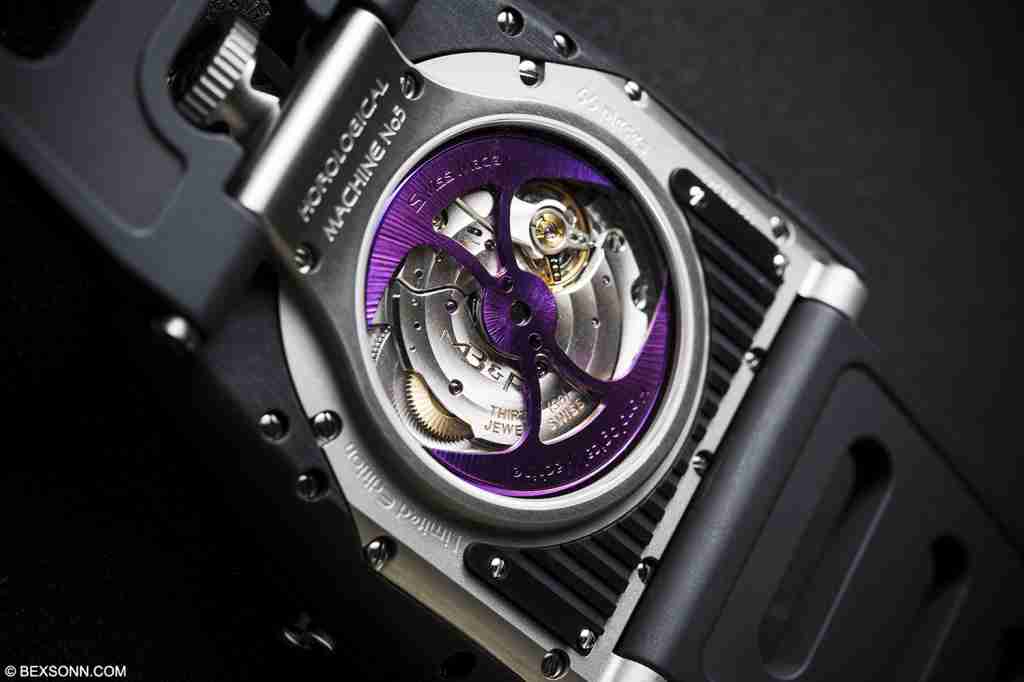 The movement, developed with the help of Jean-François Mojon and Vincent Boucard, is housed in its own stainless steel shell, protecting it from moisture as well as shocks. The jumping hours are bi-directional, enabling the time to be easily set both forwards and backwards. The two mineral glass disks of the hours and minutes are supported by a flat wide bridge. The disks overlap as much as possible to maximise their diameter and space for large legible numerals. Turning the HM5 CM over you’ll see the signature battle-axe shaped winding rotor, made from 22k gold in iridescent purple, matching the indicators on the dial. 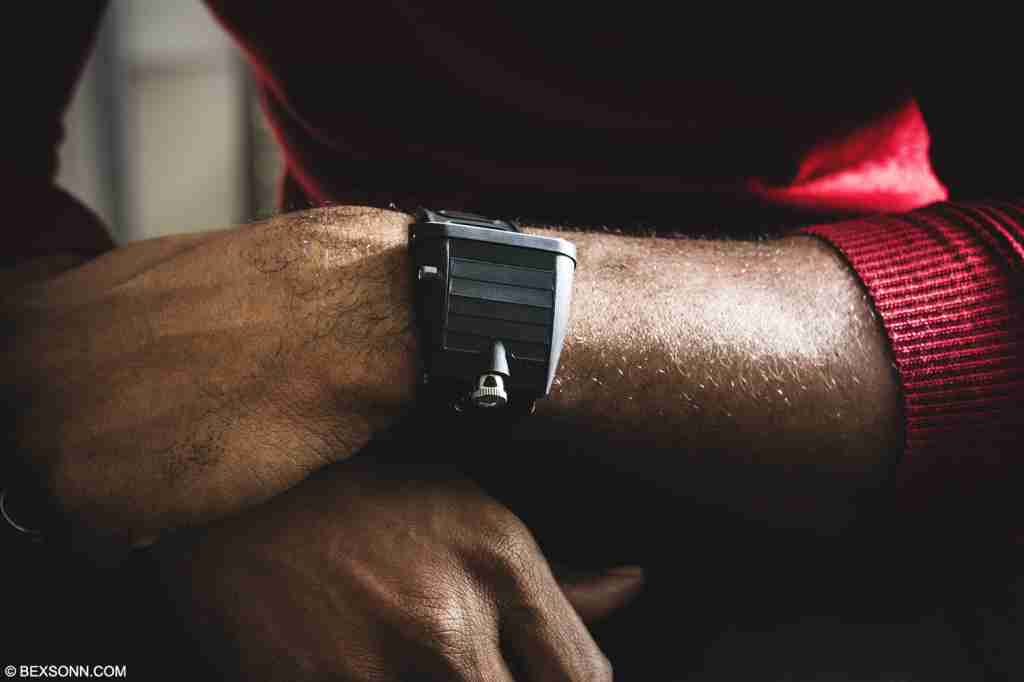 Like the HM5 RT released last year just before Salon QP, the case is the focus point here and the fact that Max chose to introduce a new custom material that is black, robust and can be polished like stainless steel is just downright cool, and also the fact its absence of colour isn’t just superficial. We mentioned before that the zirconium version was still our favourite simply because it was more understated but this CarbonMacrolon HM5 – which is actually rather nice to wear on the wrist because of its lightness – has batman meets Lamborghini Miura appeal to it, which in my opinion suits this piece of Haute Horlogerie down to a tee!

The new Horological Machine N°5 is limited to 66 pieces and retails at £42,500 and is available to buy from MB&F selected outlets such as Marcus Watches. For more information on this piece of Haute Horlogerie visit the official MB&F website. 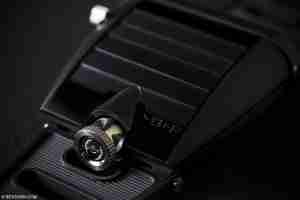 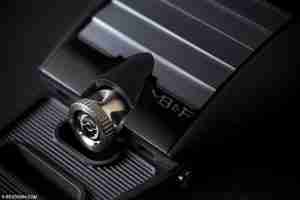 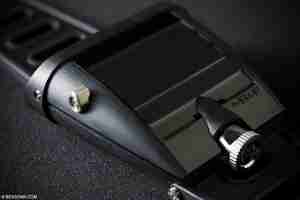 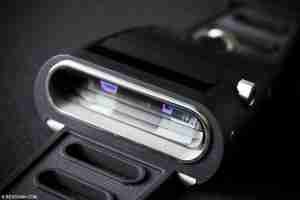 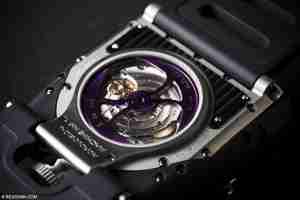 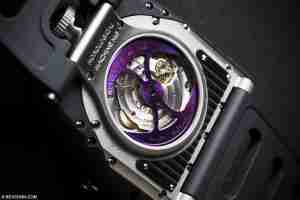 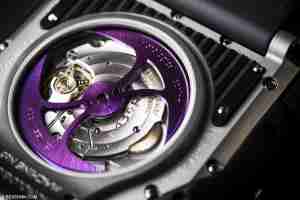 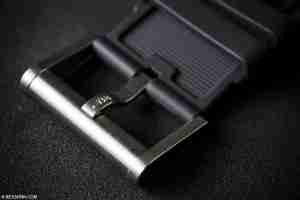 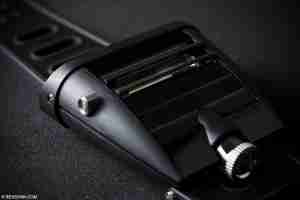 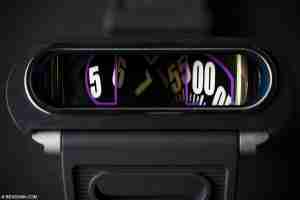 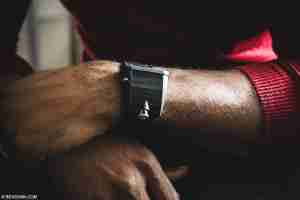 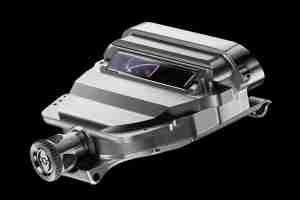 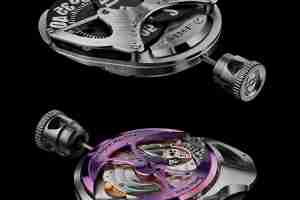 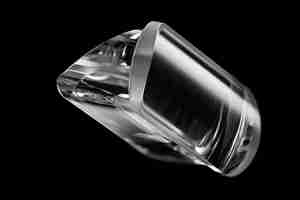