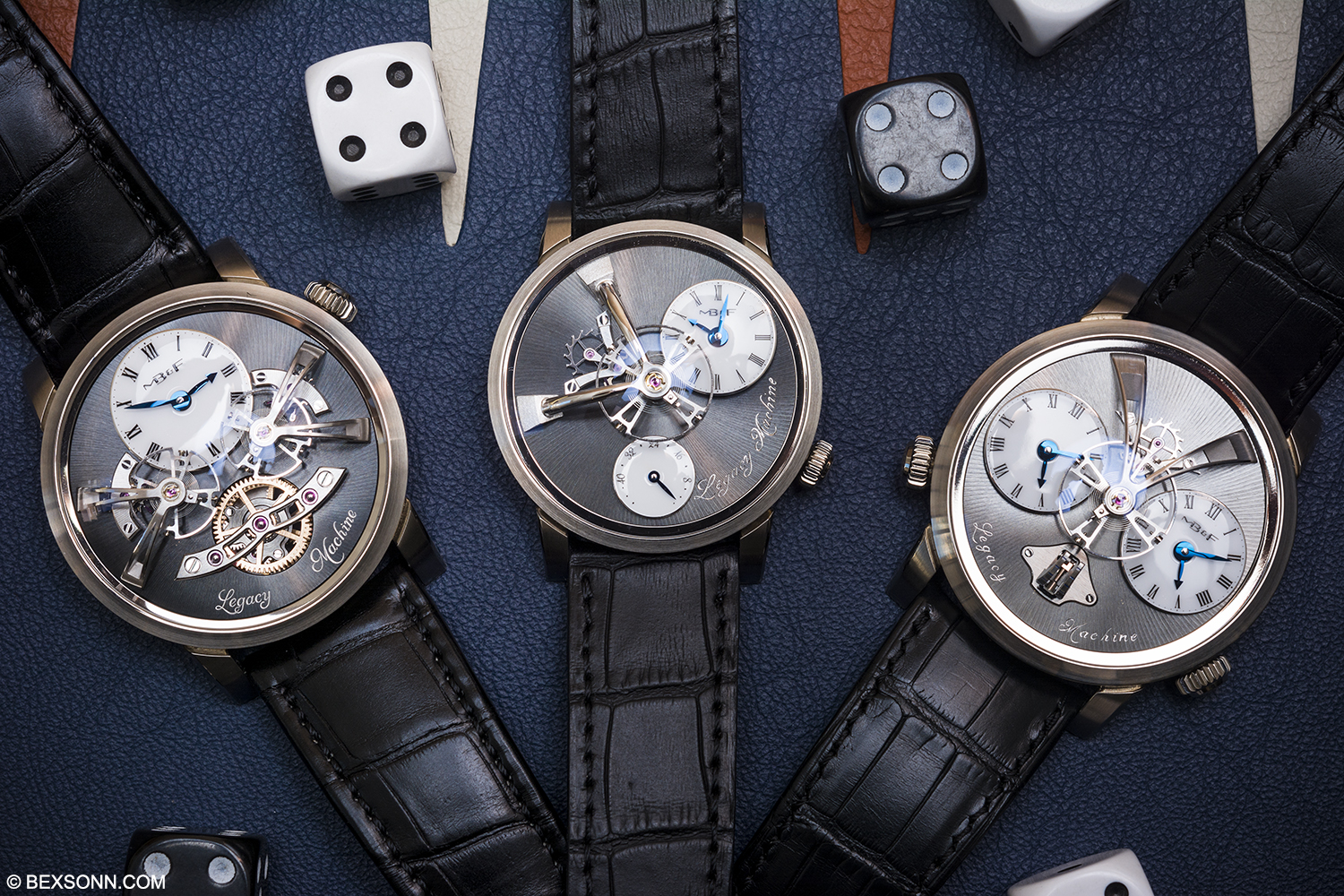 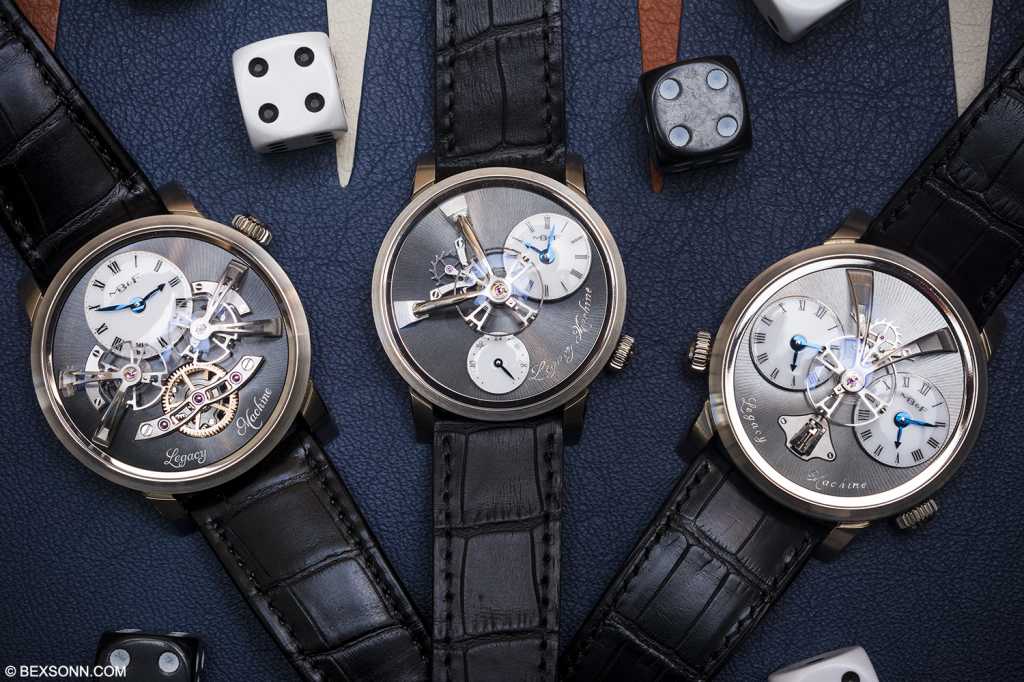 MB&F Legacy Machine 101: Last year Max Büsser and Friends introduced us to the Legacy Machine N°2, which was naturally the predecessor to the LM1, for a recap you can read our previous hands-on posts here, on the LM2. Max first introduced the LM1 in 2011, which featured dual time zone, vertical power reserve and a suspended balance wheel – with a more conservative design. This was made to answer the question of what type of timepiece Max Büsser would’ve created if he were born 100 years earlier? The MB&F LM2 was the follow-up to this exact same question but going back even further by 250 years or so – to the times of horological legends of the 18th century: Abraham-Louis Breguet (1747– 1823), Ferdinand Berthoud (1727– 1807) and Antide Janvier (1751– 1835). 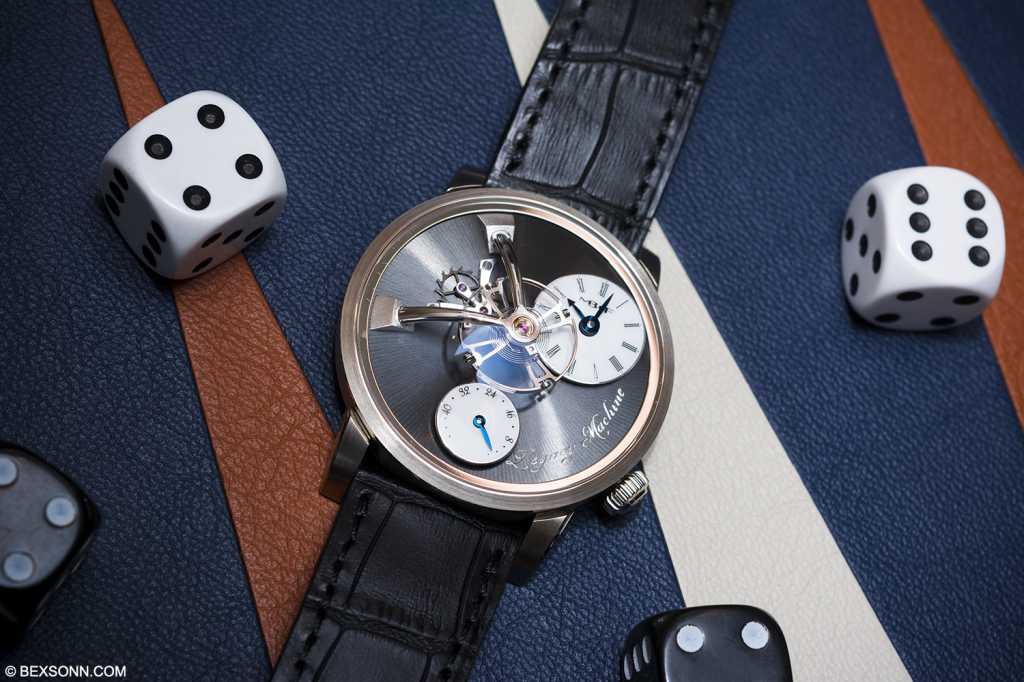 These two haute horlogerie timepieces mentioned above were well received by many but the question that most watch enthusiasts had on the their minds was, “when would MB&F introduce a piece that is more widely accessible and more wearable on a daily basis?” Once again Max Büsser and Friends have answered this question by introducing the Legacy Machine 101, which even they might say probably should have been the first Legacy Machine they introduced, it’s smaller, more affordable and the most wearable MB&F to date. Now, many may argue that calling the LM101 affordable is probably an incorrect statement to make but in comparison to its predecessors, it has a price tag that is certainly easier to swallow. 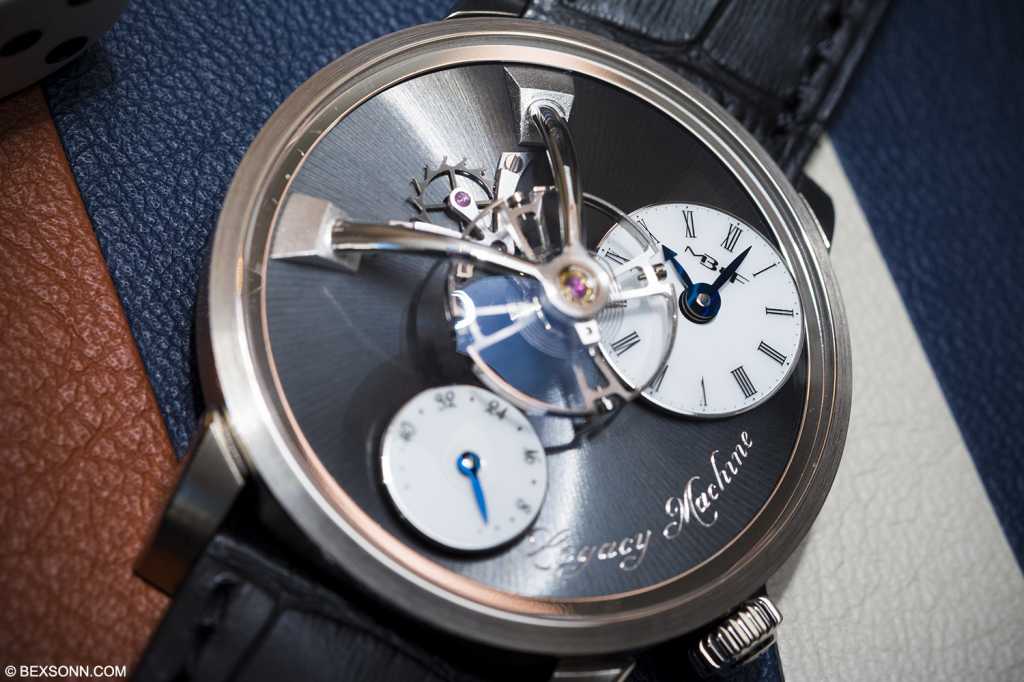 The new LM101 boasts a case that is more classically sized at 40mm, 4mm smaller than both the LM1 and LM2. In essence the LM101 is a scaled-down version of the LM1, with a suspended balance wheel over the white lacquered dials with blued-gold hands (that seem to hover above the fine Sunray engraved top plate) but with the absence of a second time zone and vertical power reserve gauge. Instead, what MB&F have done is place a dial at 6 o’clock that indicates the power reserve. The Legacy Machine 101 embodies and accentuates the very essence of what is essential in a wristwatch: the balance wheel, which is responsible for regulating precision; how much power remains in the mainspring, which indicates when it needs to be next wound; and of course, the time. 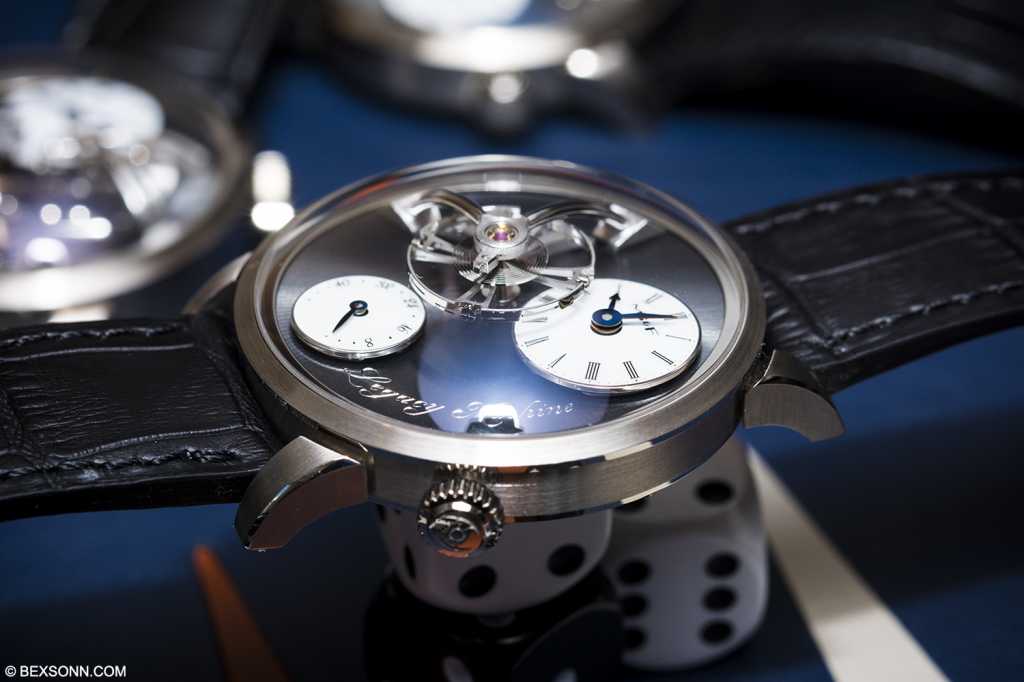 Visually the balance wheel does appear to dominate the dial and even may appear to be larger than that of the LM1 but in reality it is actually the same size (14mm). The balance wheel hangs from elegant twin arches that have been milled from a solid block of metal. And in-keeping with the asymmetrical layout of the dial, the crown for the LM101 has been placed at 4 o’clock.

Covering the dial is domed sapphire crystal to accommodate the twin arches but it has been cleverly disguised to make it seem as though you could actually touch the dial. Turning over Legacy Machine 101, you’ll see the display back crystal (domed to reduce the thickness of the caseband and visually the height of the watch) which reveals the exquisitely hand finished movement. Curved plates and bridges pay homage to the style found in high quality historic pocket watches and testify to the respect accorded to historical legitimacy. 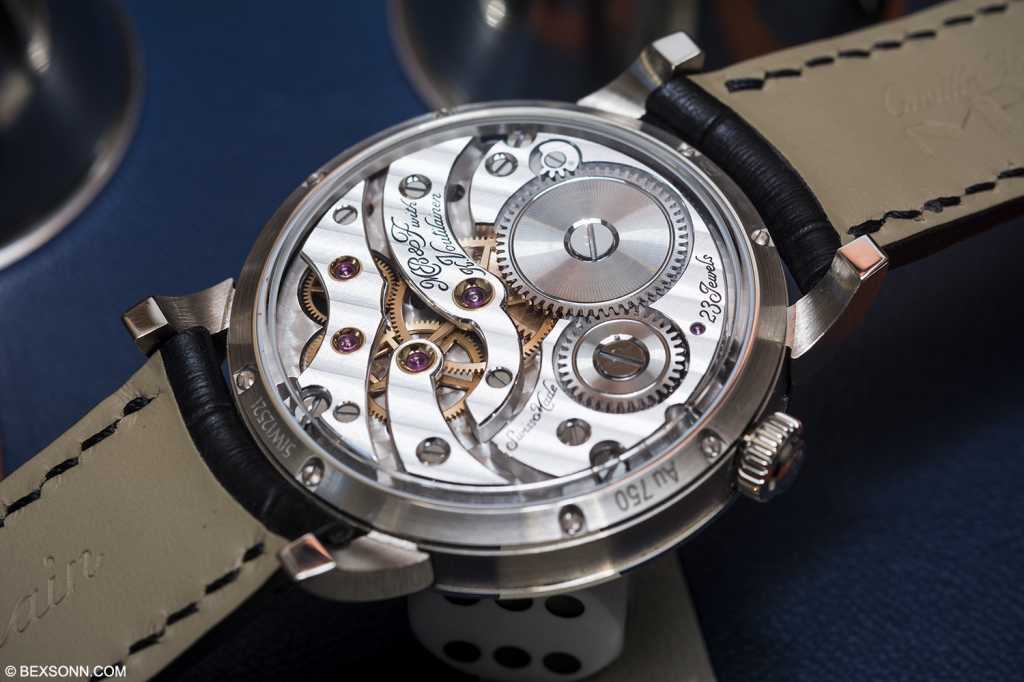 While we’ve highlighted the finer details of the case, dial and finishes, the real star of the show here is the movement. You see, while the movement of Legacy Machine 101 is superficially similar to that of Legacy Machine N°1, closer inspection reveals that it is an entirely new calibre. It is not merely a scaled-down version of LM1’s movement, but an entirely new calibre conceived and developed in- house by MB&F.

The thing is – MB&F have always been very clear about its intention and that it wasn’t a manufacture but instead chose wisely with whom it worked with to create custom movements without having to heavily invest in them. 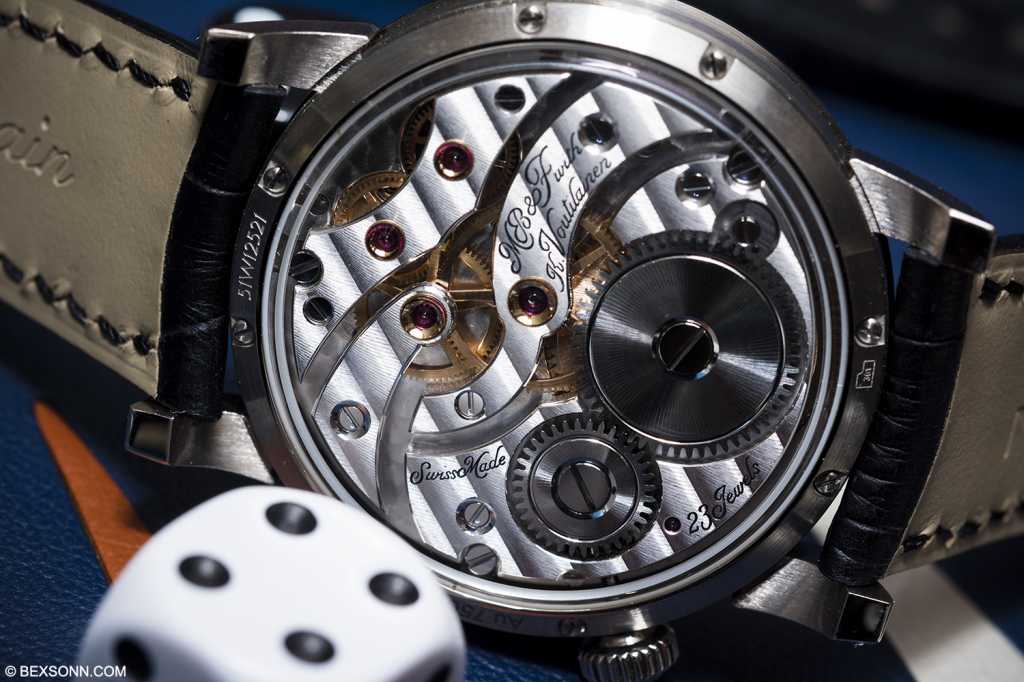 While the movement was developed entirely in-house, Max did call upon friend and acclaimed master watchmaker Kari Voutilainen, who assumed responsibility for ensuring the movement’s historical accuracy of the bridge design and fine finishing. With its undulating Geneva waves, hand polished bevels, gold chatons and countersunk blued screws, which may seem like minor details but they do make it look just down right gorgeous. 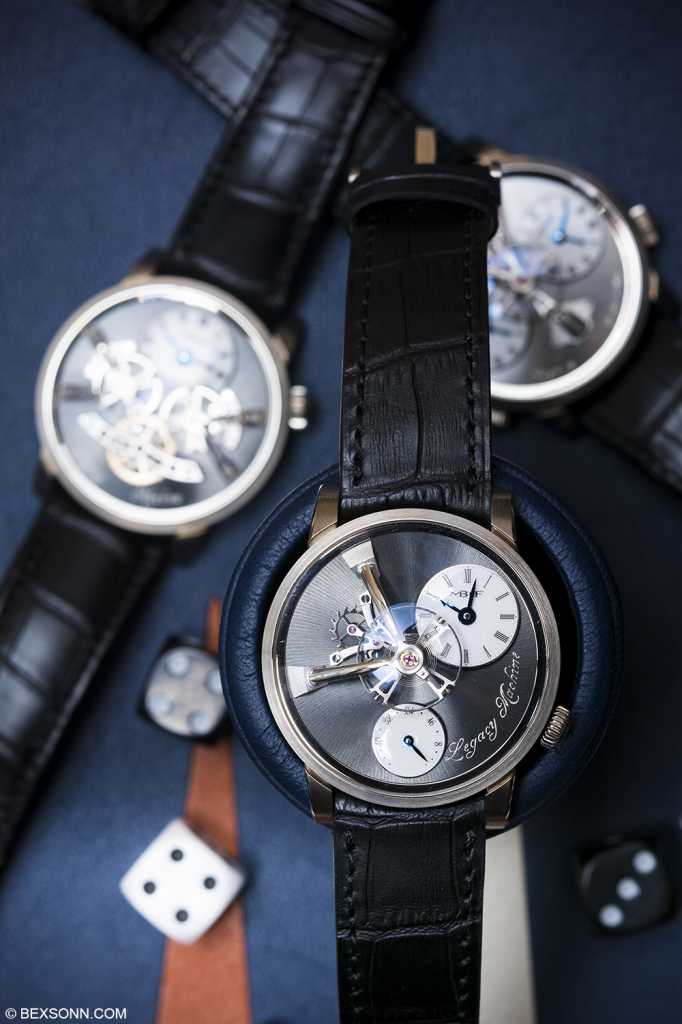 In reality, is was amazing just how small and comfy the LM101 is on the wrist and even with the domed crystal protruding and the entire timepiece being 16mm in thickness, it just doesn’t seem to feel that high. The LM101 in both red and white gold is priced at £44,500, which generally speaking isn’t that attainable but compared to the price of the LM1 and LM2 at £67,500 and £144,000 respectively – it is well priced. Overall, I think the most intriguing story here is the in-house movement and the fact they are moving in a new direction, creating another chapter in the story of MB&F  – with the HM6 on the horizon the future is looking bright.

Big Thanks to Alex Rose of MarcusWatches, where the new LM101 is now on sale. For more information on the new LM101, visit the official MB&F website. 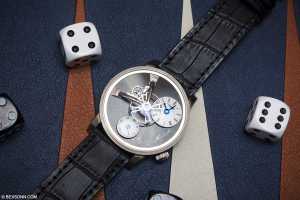 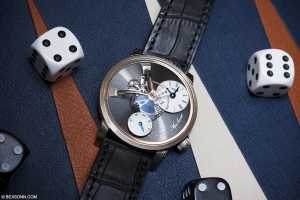 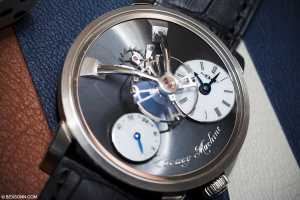 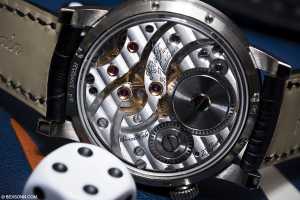 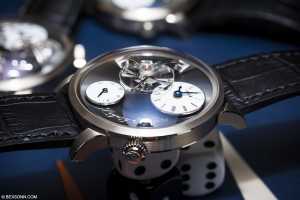 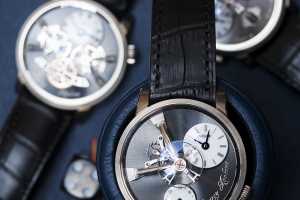 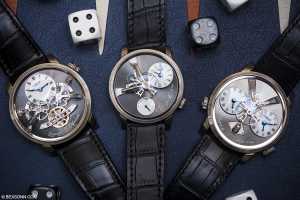 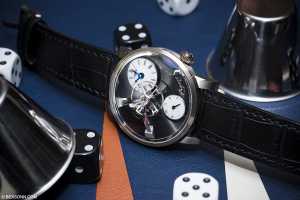 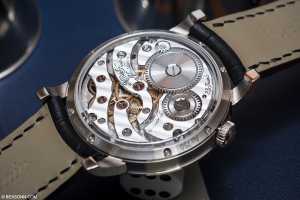 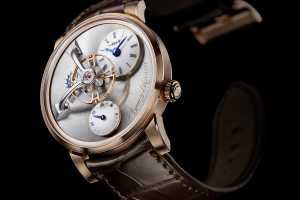 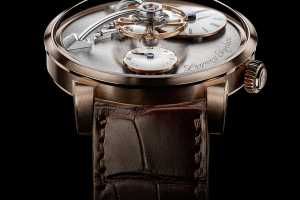 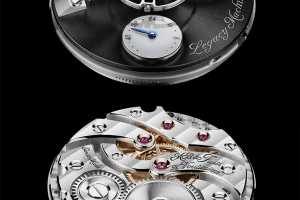 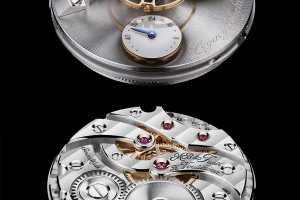