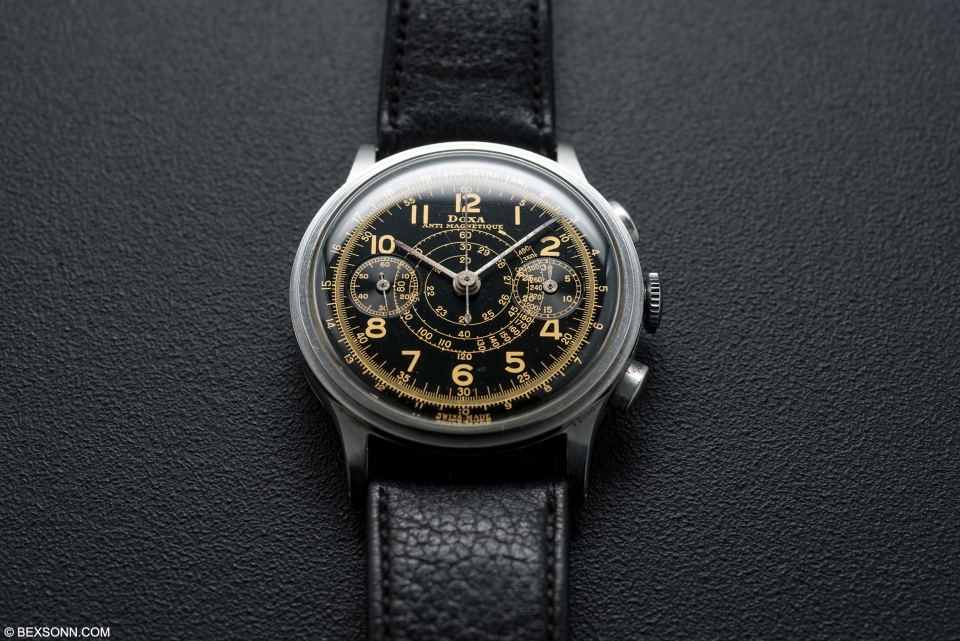 Over the past weekend we spent some time in Geneva. As you’ll be aware it is auction season once again, we visited the likes of Phillips, Christie’s, Antiquorum and Sotheby’s. While it would be easy to forget what’s going on here in London, we thought we’d highlight some lots from Watches of Knightsbridge. While they don’t necessarily feature the super high-end pieces from the mentioned auction houses, they do have some really intriguing pieces that are perhaps more attainable. 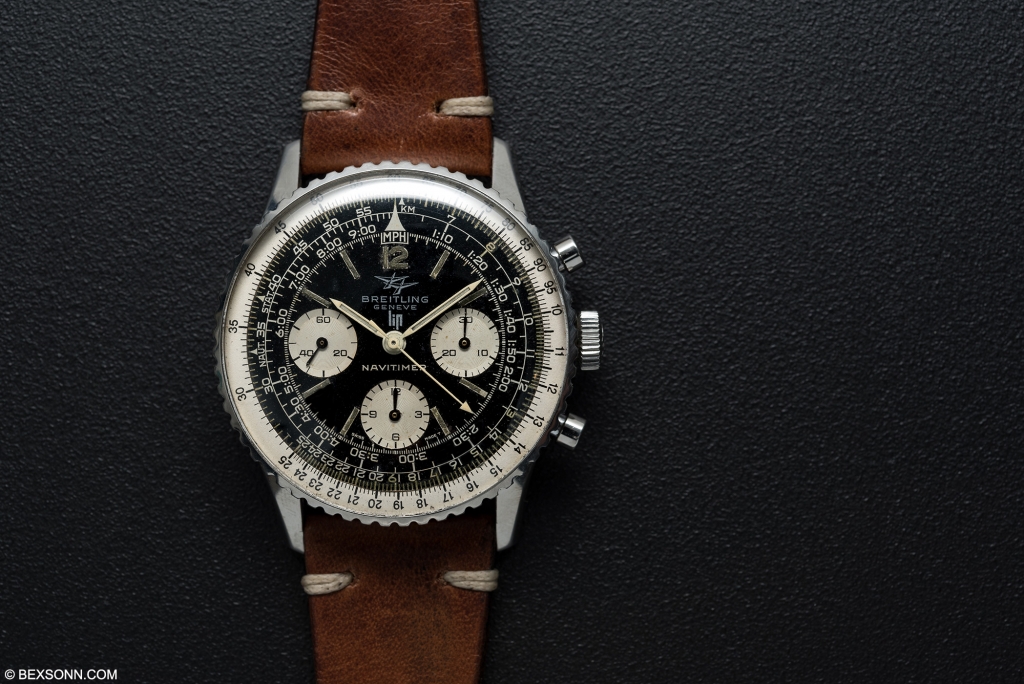 Lot 50: I’ve already mentioned this before, but I think it is increasingly important to mention it again. There seems to be a bit of a buzz around vintage Breitling at the moment and the brand is now under new ownership, with Georges Kern at the helm, which perhaps signals a new dawn. Previously, vintage Breitling’s were largely ignored by collectors for some reason but those in-the-know have always kept a keen eye on the brands vintage pieces.

The Navitimer is arguably Breitlings most famous piece, but the story of the first examples tend to cause a bit of confusion and even a bit of controversy. The problem is, no-one knows for certain the full story of the first Navitimers and if someone does, they’ve yet to shed light on it. The records held by Breitling SA in Grenchen, Switzerland are incomplete. So, to tell the story of the most famous Breitling requires a serious amount of fact-finding and to a certain extent, a bit of assumption; it is said that even the foremost world experts on vintage Breitling’s cannot agree on all the details. 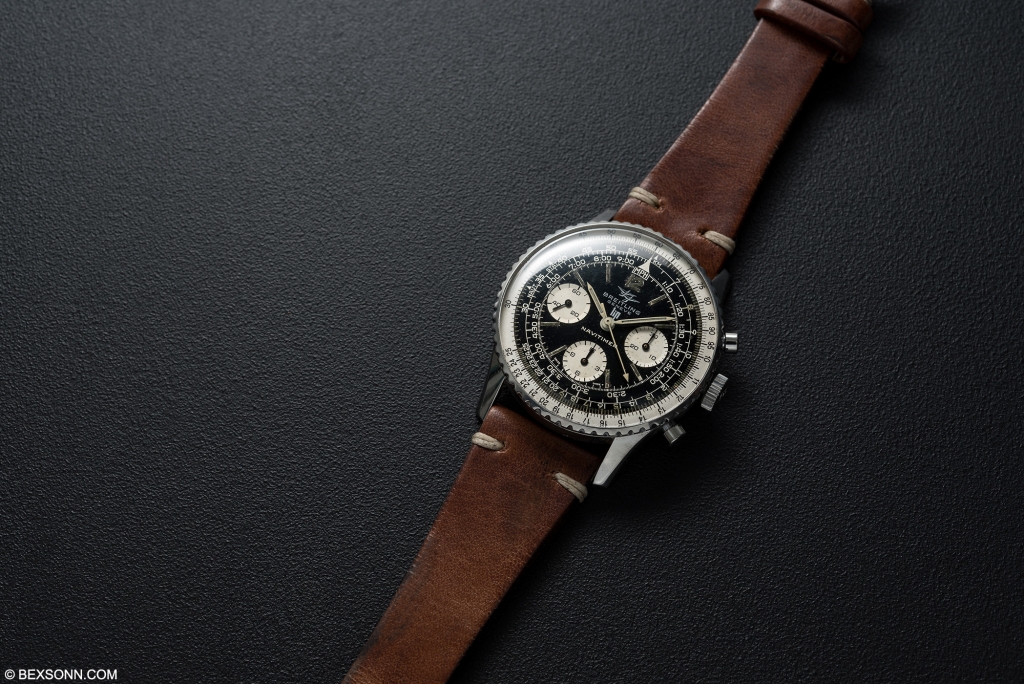 The name ‘Navitimer’ is a combination of the words Navigation & Timer, since the watch was originally developed as a navigation watch for pilots, who could use the slide rule to calculate remaining distances, fuel consumption etc. Though the Navitimer received updates, it has always been instantly recognisable. This 1966 example, is rather typical of the pieces made in the 60s, it features a reverse panda dial with a white outer slide rule scale, twinjet logo and houses the revered Venus 178 calibre; though there is one small detail that makes it standout. Beneath the wording Genève, you’ll notice the French manufacture: Lip. Lip was a well-known French manufacture that offered great watches at reasonable prices, ones of which we’ve highlighted before. It was such an important player in France during the middle of the 20th century that Breitling sought a partnership for local distribution, leading to these double-signed dials – thus making this example rather special. 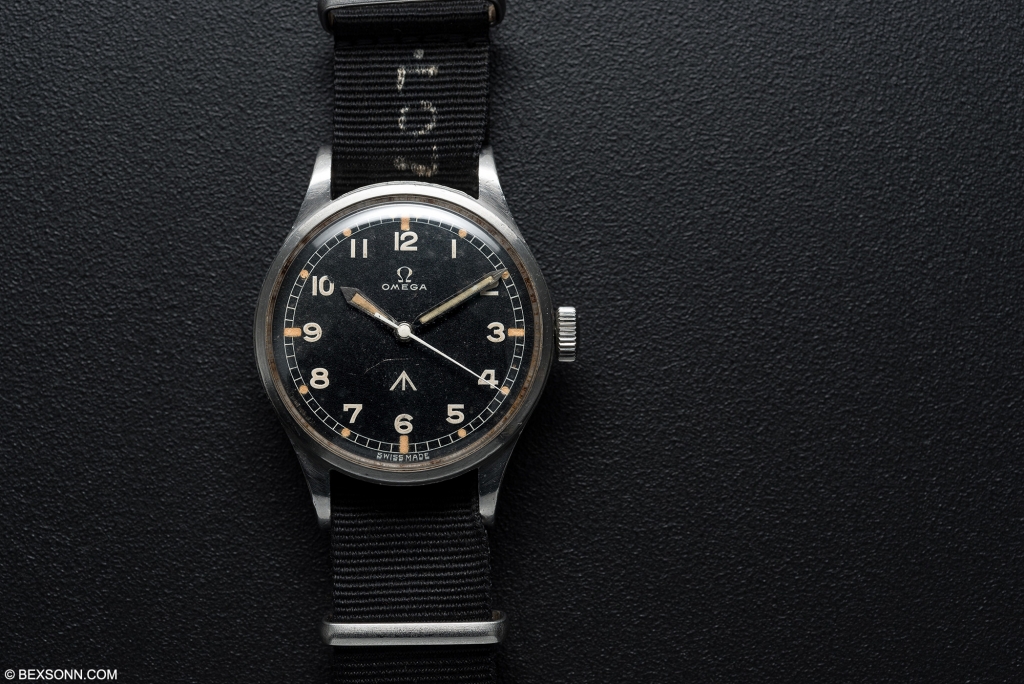 Lot 124: As of late, I’ve become more and more intrigued by military watches – perhaps its association with being made to fulfil a certain purpose draws my attention. The CK2777 was designed specifically by Omega to meet the stringent specifications set out by the Ministry of Defence (MOD) under a detailed document called DEF-3 and amended in 1959 for all HM Forces military ‘issued’ timepieces. It is thought that the MOD ordered 5,900 examples via The Goldsmiths & Silversmiths Company Ltd for the RAF in 1953 and the watches were built to specific military requirements. Very few Omega RAF CK2777’s still exist in original condition – why? Because they were all recalled by the MOD and upon recall almost every ‘Thin Arrow’ watch was stripped down to its base plate, repainted by the MOD with the addition of a ‘fat arrow’ and a T in a circle to denote ‘tritium’ lume not radium. Of the handful of examples that did escape recall, most tend to be in so-so condition but as you can see this one is in a great, honest condition, with a very minor scratch on the dial. 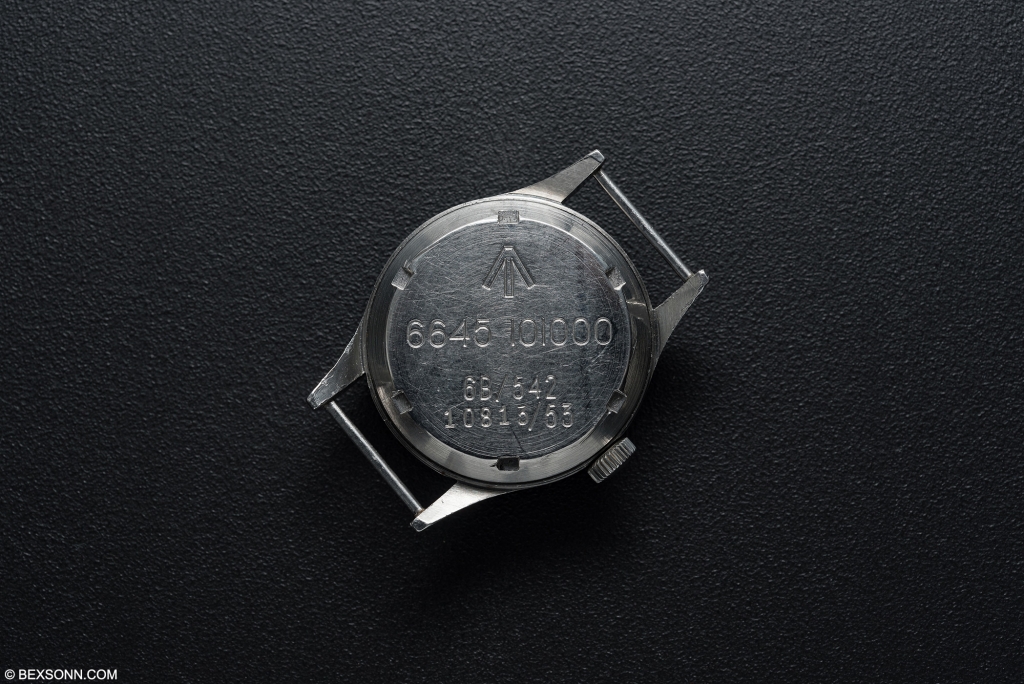 This example still features its original thin arrow black matte dial, though the radium lume on the dial and hands has been swapped out for something a lot safer. It sports its original flat brushed case with fixed solid metal lug bars and correct large non-logo crown in superb condition with perfect clear military engravings on the screw in case back dating it to 1953, making it a very early example. Housed in this 37mm case, is the calibre 283 manual wind 17 jewel movement. 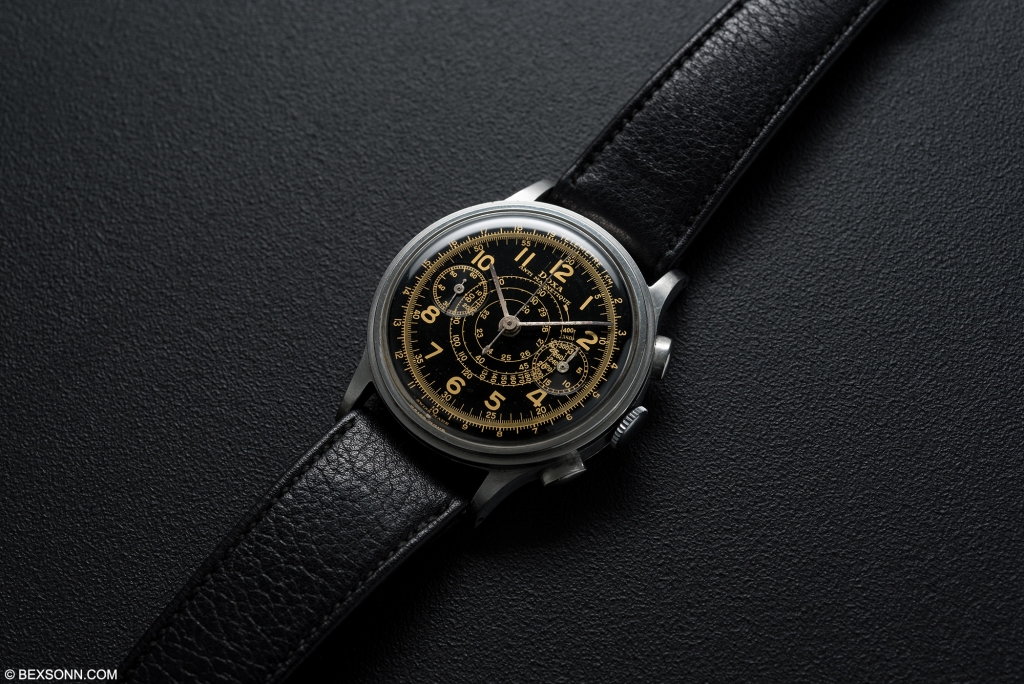 Lot 149: There is a recurring trend as to what the most popular chronographs are today. Multi-scale glossy black gilt dial, check. Large 38mm stainless steel step-case with olive pushers, check. All this, and more. Looking at the glossy gilt dial of this 40s Doxa chronograph, it is evident to see it has been rather well-preserved. While it is relatively easy to find black gilt dial chronographs in the vintage market, this particular one has so much more going for it.  A closer inspection shows a vibrant gilt outer telemeter track that adds a great balance to the dial. Adding further depth to this 40s Doxa chronograph is the gilt inner tach-o-meter scale, with the addition of gilt Arabic numerals too. This Doxa is powered by a 17-jewel manual-wound unsigned column-wheel chronograph movement. Overall, the condition, quality and rarity of this watch makes it one of my favourite pieces in the auction – not to mention the attractive estimate. 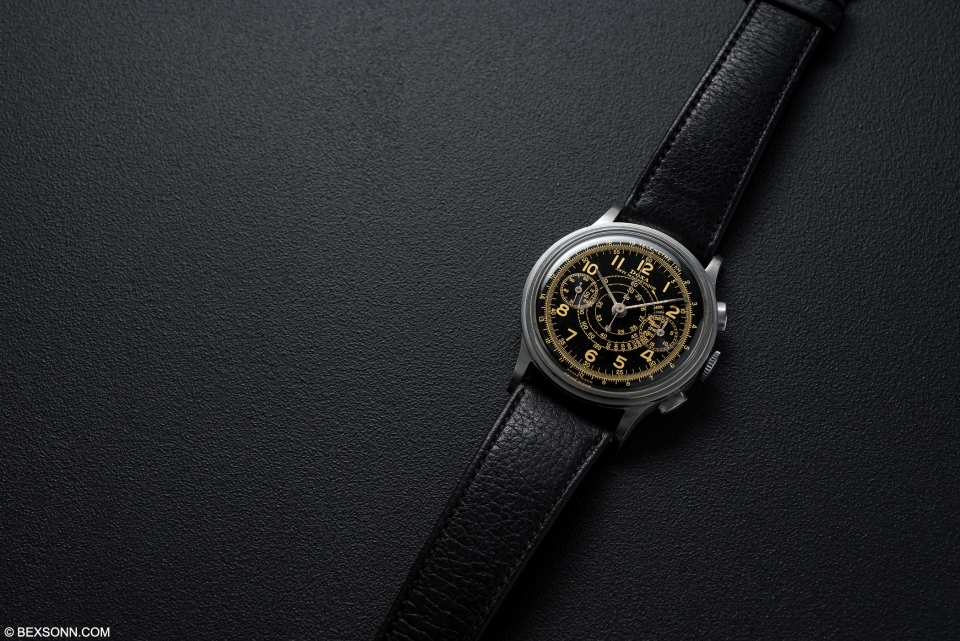 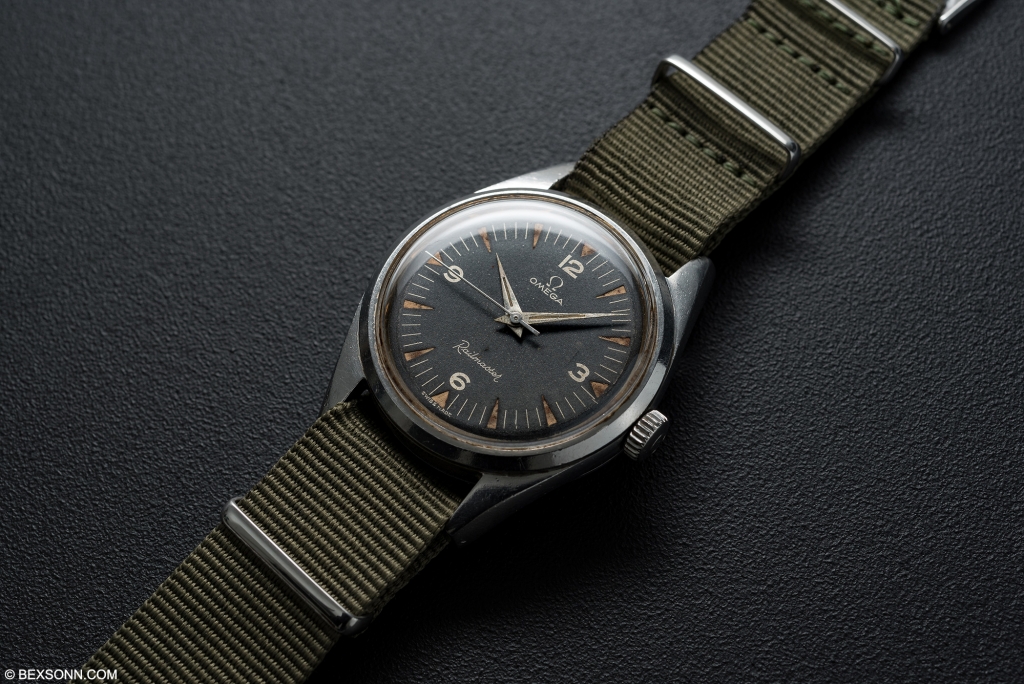 At the time, the Railmaster could resist a magnetic force of up to 1000 Gauss or 0.1 Tesla, thanks to the Faraday Cage protection. By placing a MuMetal plate on the case back, Omega were able to protect the movement inside from magnetic fields. But one thing that maligned the Railmaster, was its relatively short production run, of course starting in 1957 but ending in 1963, something that didn’t affect its trilogy counterparts. Because of its somewhat short production run, this makes the Railmaster one of the rarest pieces of the trilogy and by virtue, one of the hardest to source. 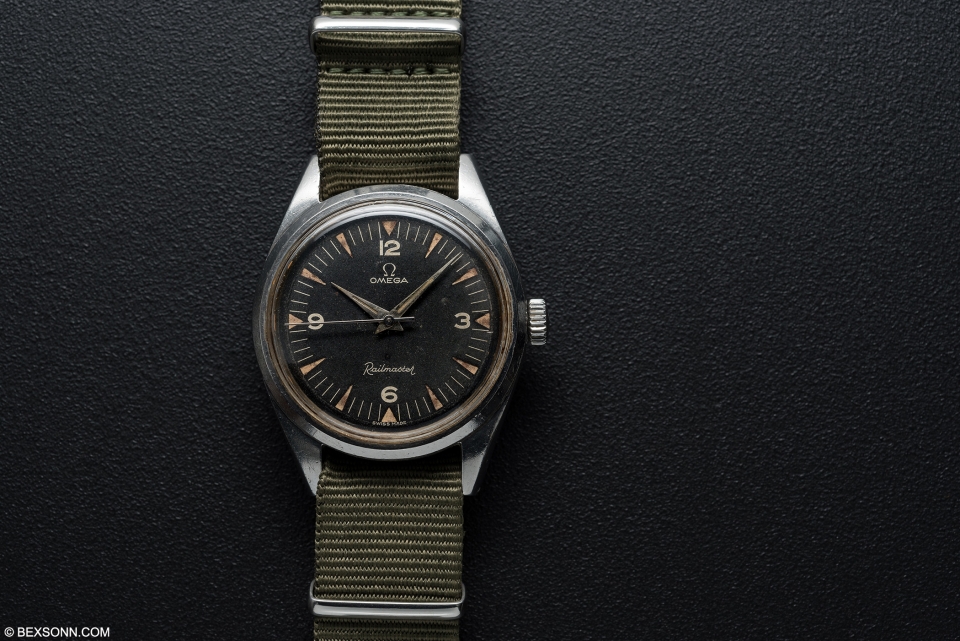 This Railmaster Ref. 2914-3 is in good, honest condition and features a matte black dial, which has aged and sports luminous inset marker, and applied Arabic numerals at 3,6,9 and 12, and steel dauphine hands. Even more interesting, it features its original Naïad crown. Ticking away inside is the calibre 285 17 jewelled movement signed and numbered by Omega. 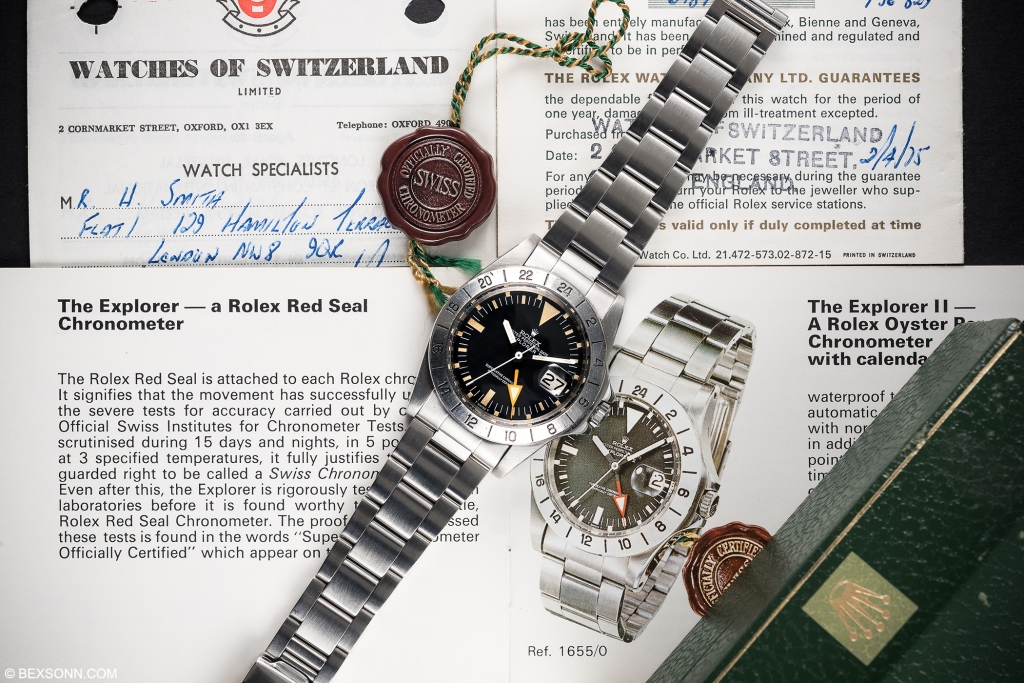 Lot 241: The Rolex Explorer II is a rather peculiar watch to most but Rolex being Rolex don’t just make wristwatches for the sake of making watches. While it may have very little use to most of us it is still iconic. Introduced in 1971, the Explorer II was launched as an Explorer with an additional function – hence the II. Aimed at speleologist (cave explorers), who worked in the dark for the majority of the time, it is said that they could easily lose track of time and become a little discombobulated; which is the reason Rolex introduced this piece. So, as you’ll notice what may actually look like a nice large orange hand for tracking a second time zone, is in fact a day/night indicator, with a bezel marked with a 24-hour scale, despite the fact the 1655 made use of the exact same movement as the GMT-Master 1675, it cannot be used to display a second time zone. 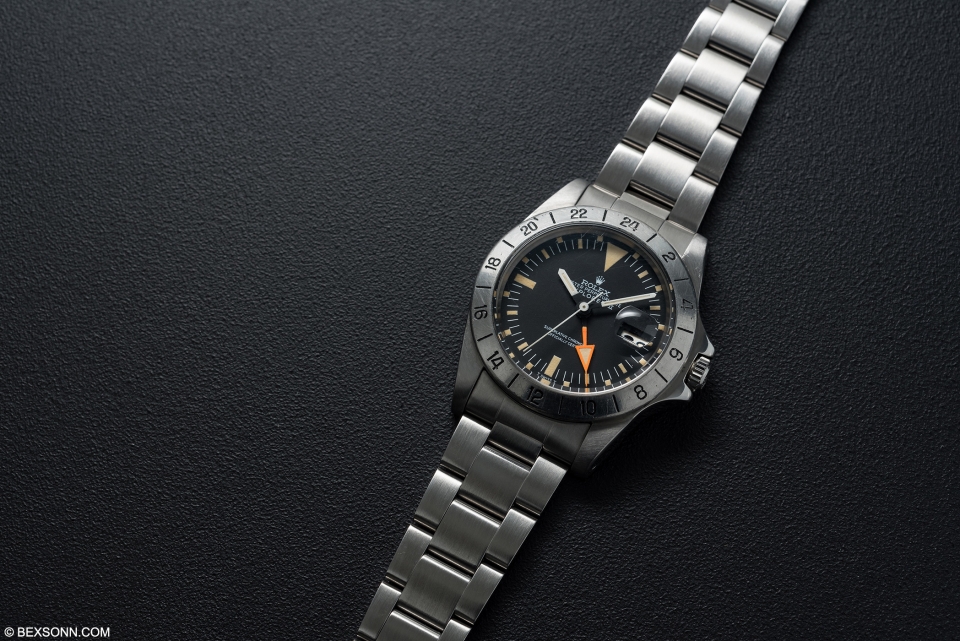 While the Explorer II doesn’t quite have the same allure as a Submariner, Daytona or GMT, there is a special appreciation for these pieces among collectors. The 1655 was never a popular watch while it was produced but maybe this was down to marketing, who knows but you don’t see them as often as the aforementioned pieces. Its unpopularity is perhaps what makes it what it is today and adding to the appeal of this example is the fact it comes with its box, papers and original purchase receipt dated 1975. However, the piece itself is dated 1972, which displays the 1655 just wasn’t a quick seller. 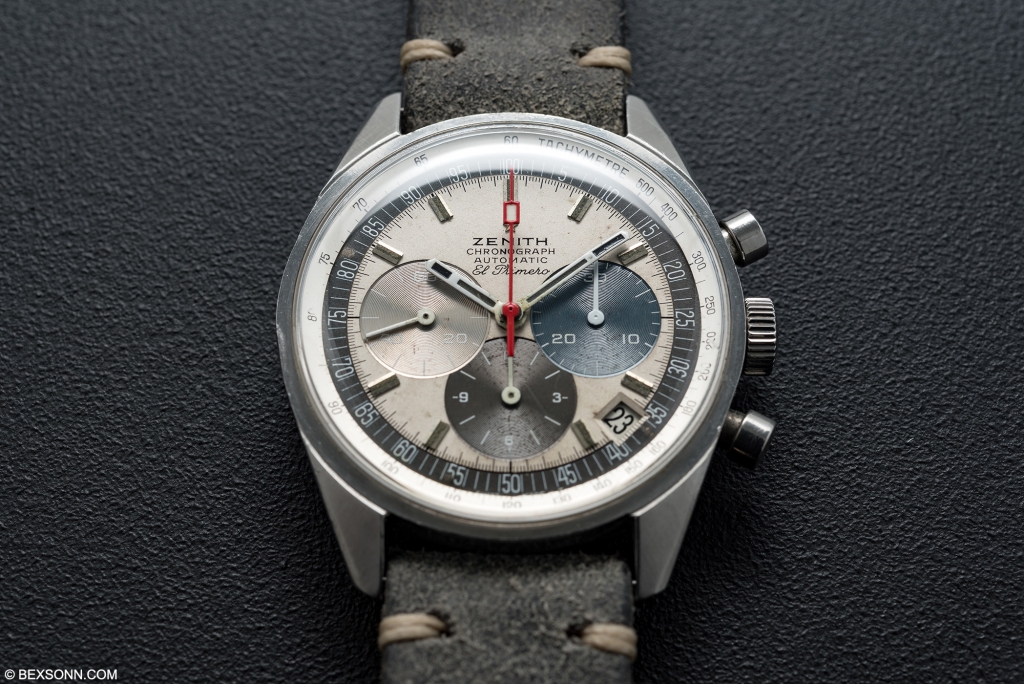 Lot 296: The El Primero is a legend within its own right but there is a much-debated story behind it. During the early 1960s there was a race on to see who could create the world’s first self-winding (automatic) chronograph. There were of course a few companies that shared an interest in claiming this technological breakthrough: Heuer/Buren-Hamilton/Breitling. However, there were a couple of silent watch manufactures working on this advance too: in the Far East was Seiko, who were busy working on their own version and then there was a company from Le Locle – Zenith!

But, and it is a big but, who was first? Was it Heuer/Hamilton-Buren/Breitling or Seiko who actually beat Zenith to the market? This has long been analysed in detail and you can read that in-depth story on Project 99 written by none other than Jeff Stein. But when it all comes down to it, the fact of the matter is this. While Heuer were better prepared for production and Seiko silently released theirs in 1969 (but was only made available to the Japanese market) – it was Zenith who actually announced their automatic chronograph movement first. It was that 7-year journey that started in 1962 that produced, arguably, one of the best automatic chronographs ever made. Though you can’t take anything away from Heuer and Seiko, Zenith produced the more superior automatic chronograph movement in the El Primero. 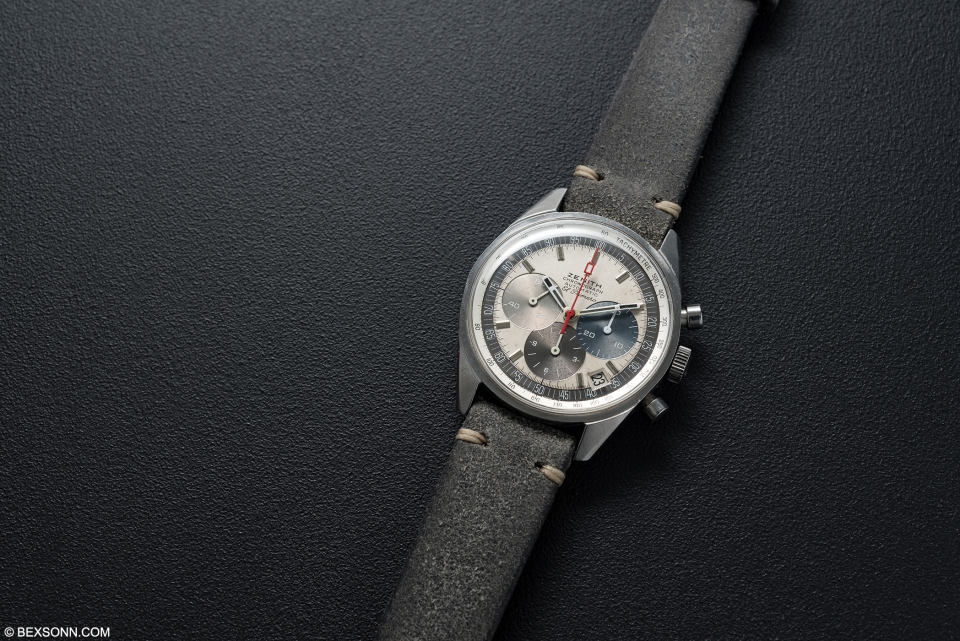 I’ve always been a fan of the El Primero and this current lot presents an opportunity to own a slice of watchmaking history. Made in circa 1969, this ref. A386 El Primero features the iconic tri-colour, large overlapping chronograph registers, with date aperture at 16:30, baton hands and red sweeping-seconds chronograph hand. While it is perhaps not the crispest example I’ve personally seen, it is in great honest condition, with great patina – adding charm.

The Watches of Knightsbridge auction will take place on the 18th November 2017, make sure you visit their new website for this month’s full catalogue.