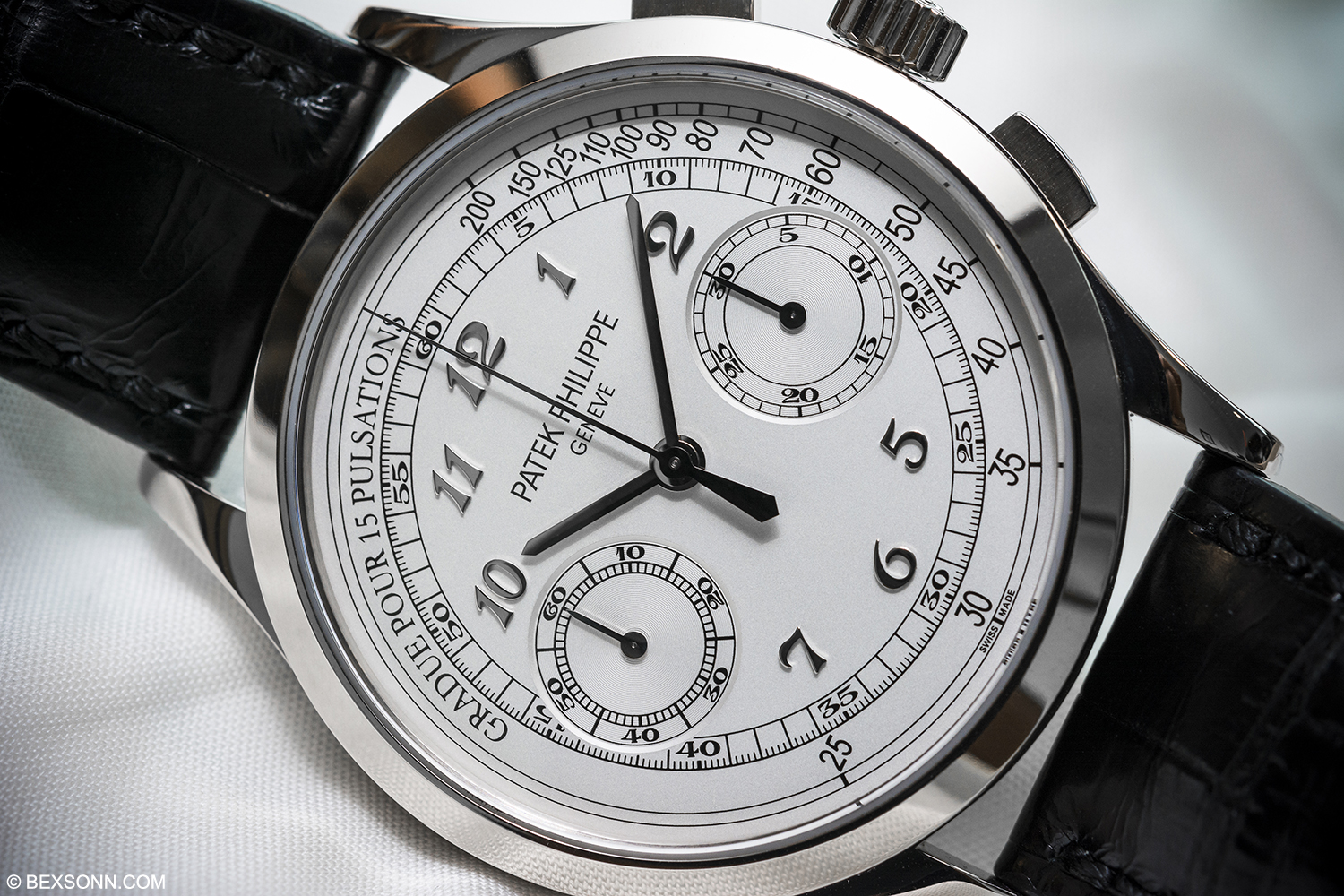 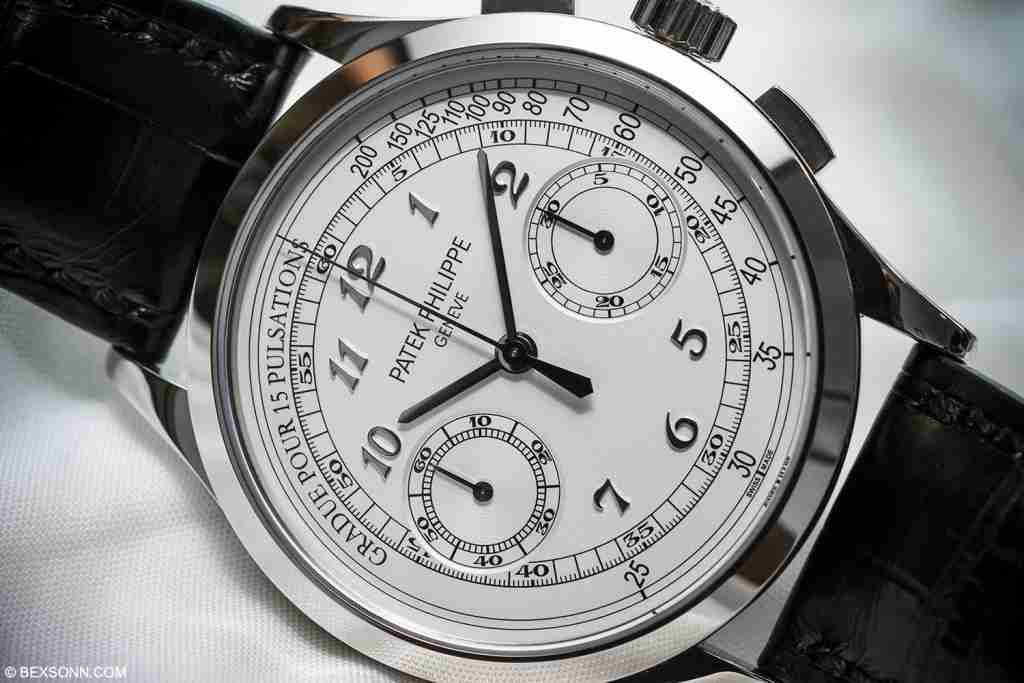 Patek Philippe Chronograph 5170G: Welcome to a new year on BEXSONN.com. We thought we’d start the New Year with a light article on the Patek Philippe 5170G. The 5170 is the current manual wind chronograph in a long line of, well, Patek chronographs. During the summer of 2014 we managed to get our hands on one. Though it’s nothing new, it does after all house one of my favourite complications and you should know by now I find it rather difficult to resist the allure of a column wheel chronograph, not to mention this is one of my personal favourite modern Patek Philippe chronos.

The Patek Philippe is a cult object and considered a wise investment but I think some people seem to forget just why, or some know and don’t let them see the light of day? Patek are steeped in history and produce some of the world’s most unique and beautiful haute horlogerie timepieces but what sets them apart from other brands are their long-term value. But do people care about this? It’s hard to say but knowing a Patek can stand the test of time in a financial slump, I guess it could be considered as being better than money in the bank.

Vintage Patek Philippe chronographs have become sought after, rare and require some seriously deep pockets! Take the ref. 5170s forefathers, the ref. 130 first introduced in 1934, an exquisite chronograph, which is just so downright cool. How about another predecessor, the ref. 530 first introduced in 1939 and bears a close resemblance to the 5170 or, the ref. 1463 first introduced in 1940 and again bears similar likeness. Examples of these references all sold for a handsome sum of money during Christies Patek Philppe 175 auction in the latter part of 2014, but I might add these pieces were made from rarer metals when talking about Patek’s – stainless steel and we’ve touched on this subject in previous Patek posts here, and here. Of course there was the ref. 5070 that the 5170 replaced but this chronograph bears more similarity to the ref. 2512 and this is no coincidence. The 5070 drew its inspiration from the oversize 46mm 2512 chronograph wristwatch produced in 1952. As you can see the Patek Philippe chronograph has very strong pedigree and any new iteration needs to live up to this standard. 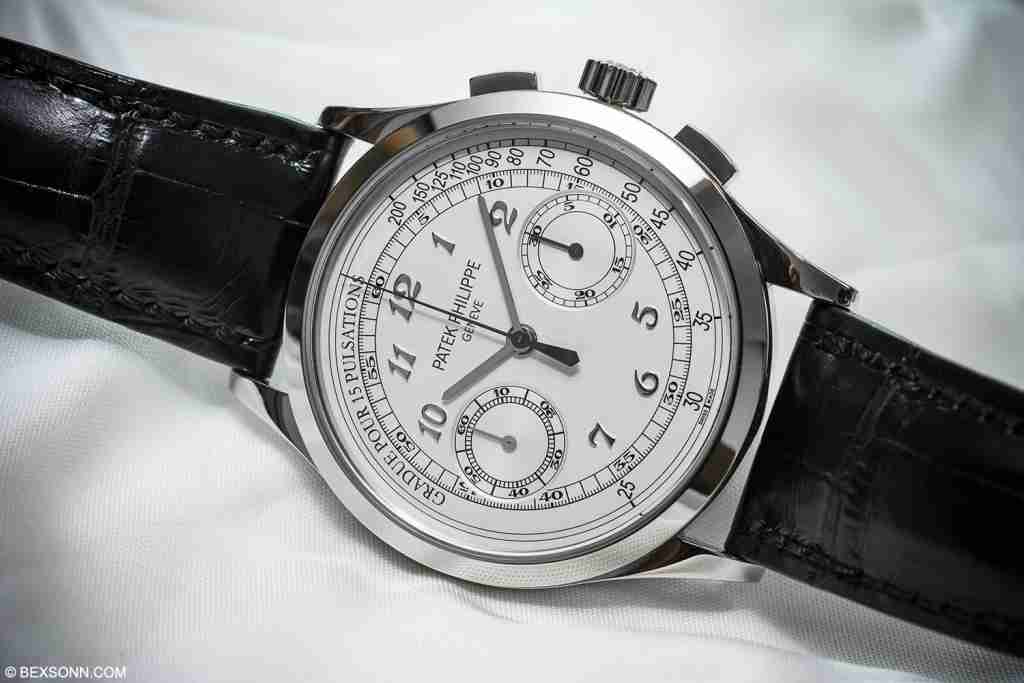 As mentioned above the Patek Philippe 5170 is nothing new and it was in fact the 5170J (Yellow- Gold) that was first introduced at Basel World 2010. But what makes this piece different to its predecessors (5070), is that it uses Patek’s in-house manually wound chronograph movement the calibre CH 29-535 PS. The earlier 5070 calibre CH 27-70 PS, was largely based on a Lemania movement, though Patek completely reengineered it, creating a beautiful chronograph movement nonetheless. 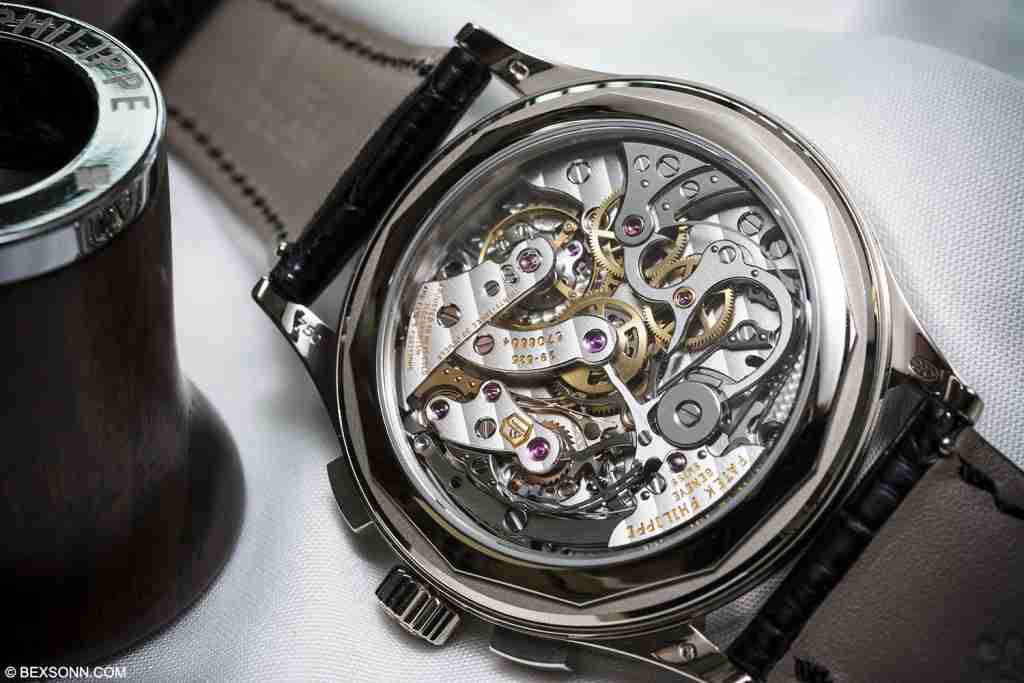 The CH 29-535 PS took more than 5 years to develop but spawned some other chronograph calibres along the way, such as the CHR 27-525 PS that we mentioned before here. In true classic form the calibre CH 29-535 PS makes use of a column wheel and horizontal clutch architecture and a number of Patek innovations, making it super-efficient and precise. 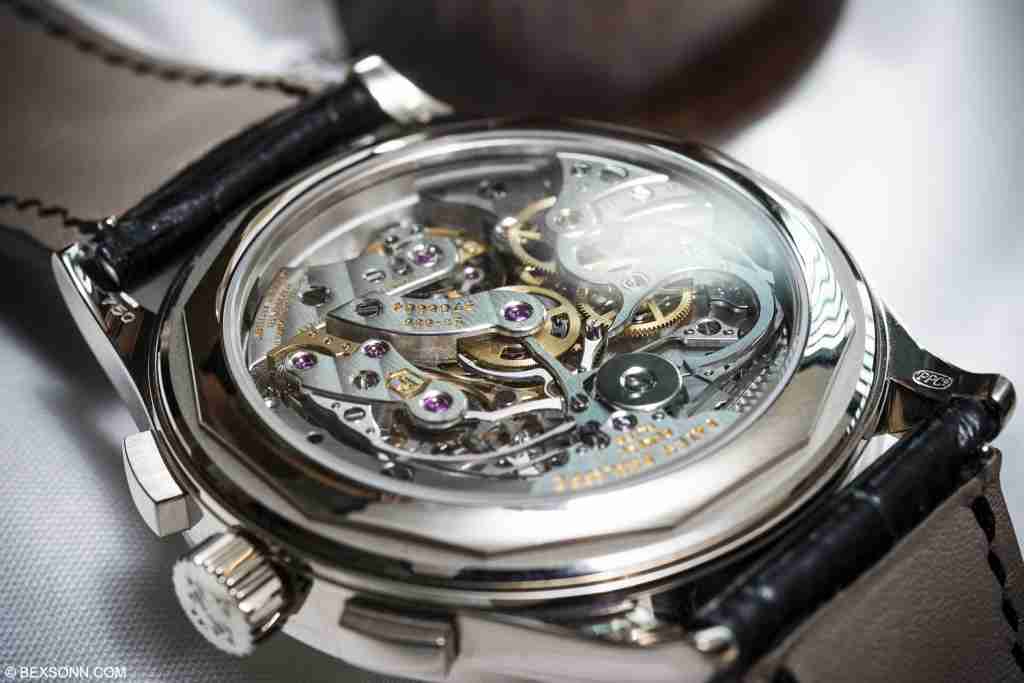 Innovations such as; the vibration-free chronograph hand movement that improves efficiency and reduction of mechanical wear, or the elaborate construction which assures that the small hand jumps within a fraction of a second, enhancing precision and legibility. Not only is the CH 29-535 PS precise but it is beautifully finished in faithful Patek fashion. The old-style bridges have been chamfered, polished, and decorated with Geneva striping that can be admired through the sapphire-crystal case back. 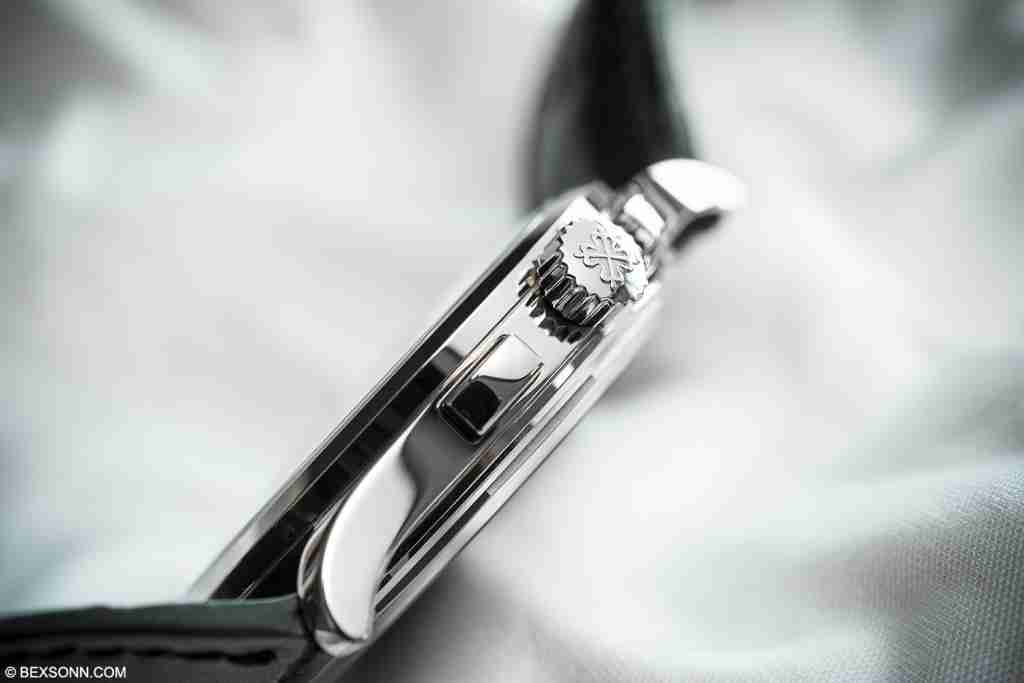 The 18-carat white-gold case of the 5170G measures a classic 39mm and its sleek shape follows the traditional Patek Calatrava design. The lugs extend from the case band with a slight curve that aids comfort. The chronograph is operated with rectangular shape pushers at 2 and 4 o’clock, this has been a typical attribute of Patek Philippe wrist chronographs for over 7 decades. The crown is also an important element, it’s knurled for convenient winding with two fingers but small enough not to jab the wrist when the hand is bent back. 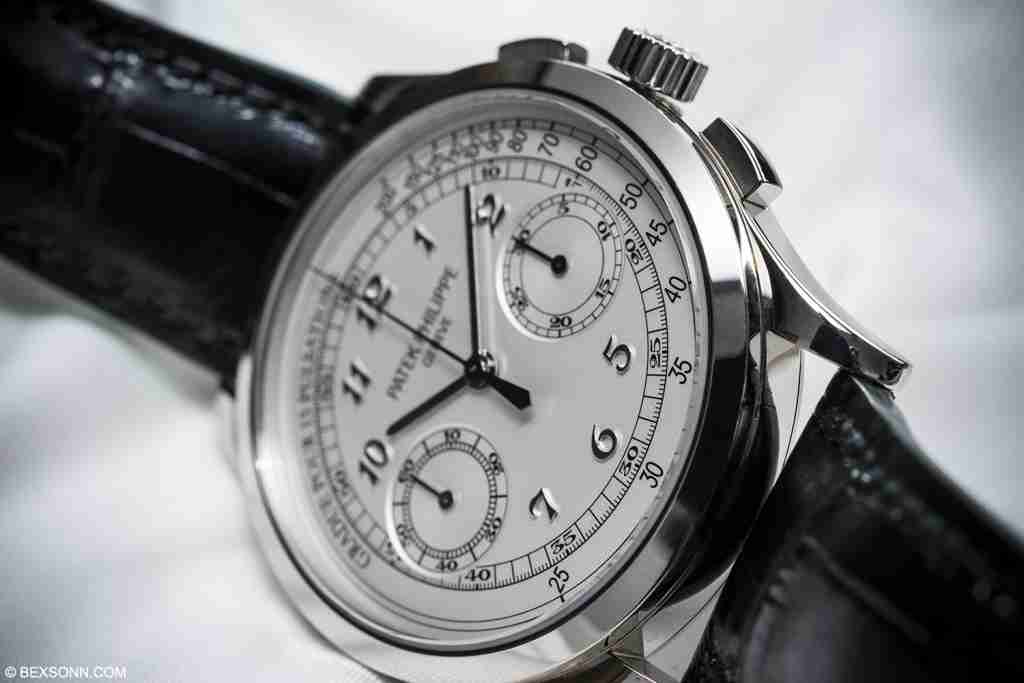 Beneath the sapphire-glass is the silvery-white dial, which differs from the 5170J, making use of applied Breguet numerals instead of roman numerals and slender baton markers, adding character. The 5170 sports a Pulsimeter scale, calibrated to 15 heartbeats, harking back to the traditional doctor’s watch. The railway track minute scale features slightly compressed Breguet numerals. The engine-turned seconds sub dial at 9 o’clock and the 30-minute counter at 3 o’clock are recessed in the main dial and sit just below the horizontal centre axis, which balances out the dial nicely, making it elegant yet legible. 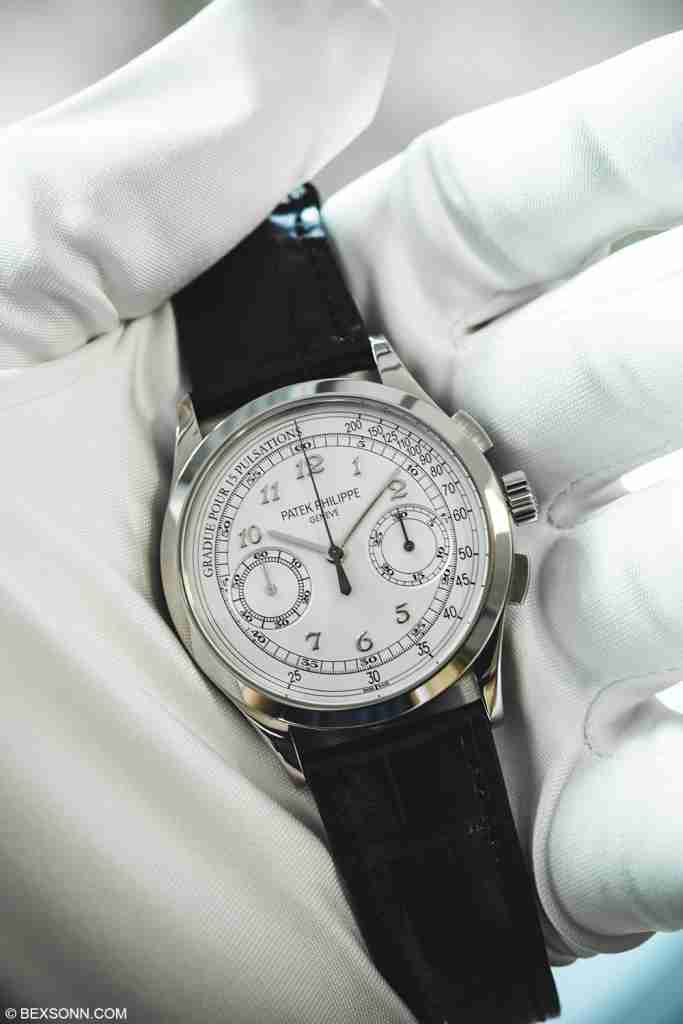 The Patek Philippe 5170G is definitely a retro-contemporary timepiece, which oozes sophistication, refinement and is just downright classy! I made references above to Patek’s vintage chronograph ancestors and this is because one day the Patek 5170 will be a vintage timepiece and I’m pretty sure it will be worth a handsome sum too, and maybe even more so if Patek decide to introduce a stainless steel version, which in my opinion would be great to see in this modern era of Patek chronographs. 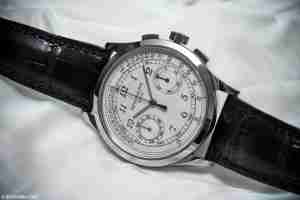 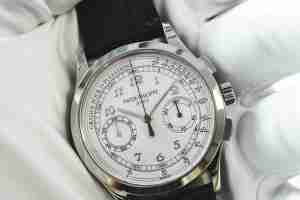 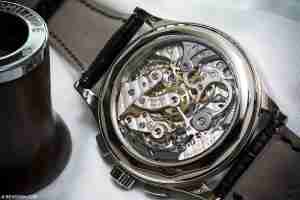 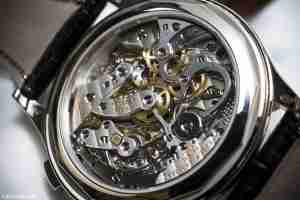 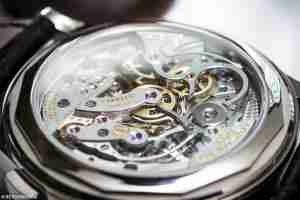 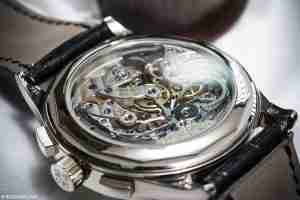 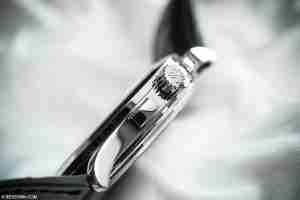 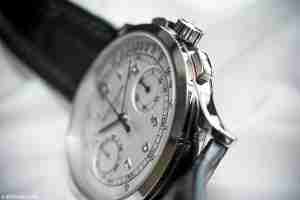 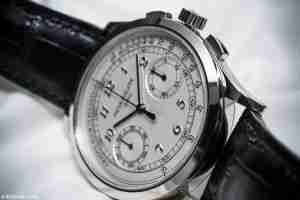 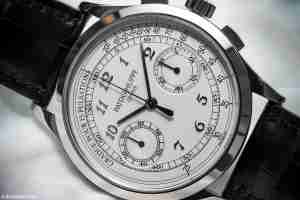 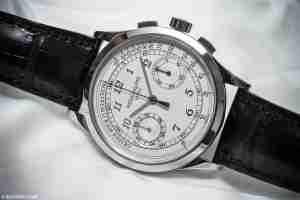