IN-DEPTH: Hands-on with the Omega Speedmaster ’57 Co-Axial, Nostalgia with a Twist 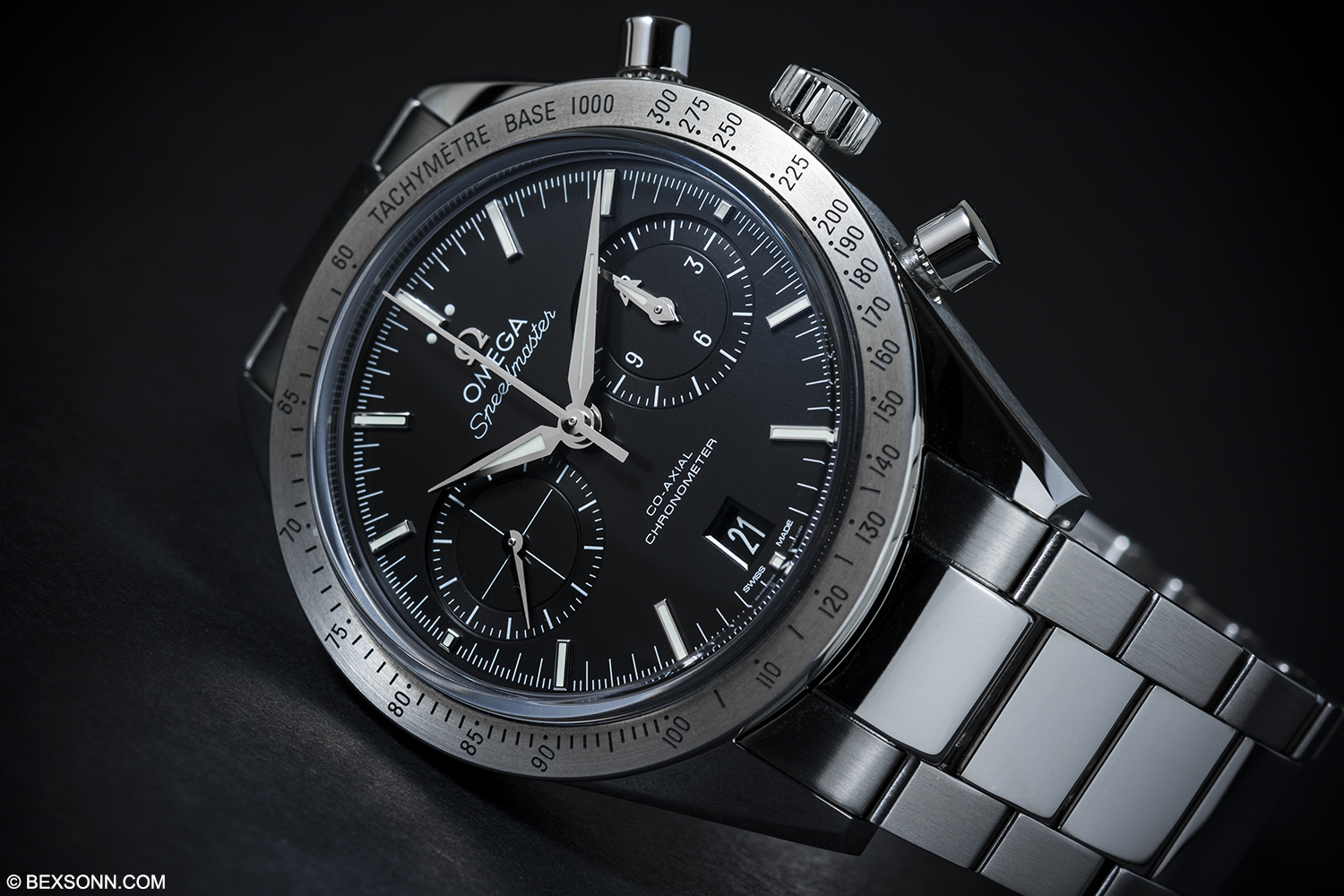 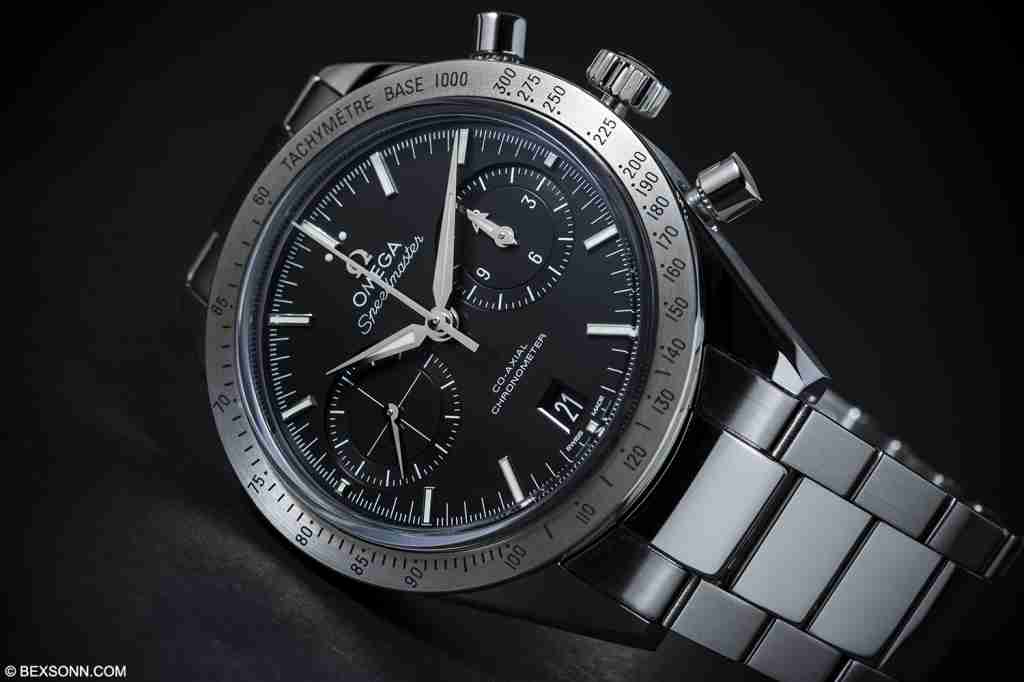 Omega Speedmaster ’57 C0-Axial: First introduced at Basel world 2013 alongside, arguably the most coveted timepiece of the watch fair that year, the Speedmaster ‘Dark Side of the Moon’. We had a very brief look at the Speedmaster ’57 last year and decided it would be good to get hold of one for a hands-on review. So we contacted the very nice people over at Omega and they were kind enough to send over an example to us for a couple of weeks. 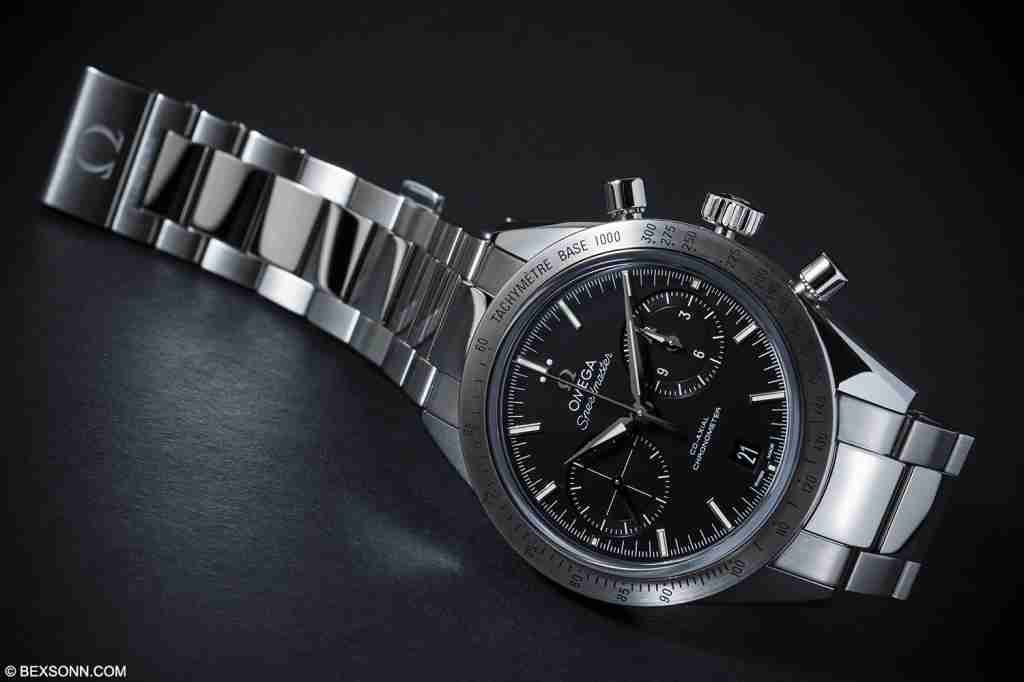 Omega do like conjuring up a little bit of nostalgia and we’ve seen this in a newly released timepiece this year too; the Seamaster 300, of which you can read our extensive review on here. They’ve done the exact same thing with this Speedmaster ’57. They’ve taken a dive into their archives and reproduced a timepiece akin to the original Ck2915 but have incorporated up to date in-house technology in the form of the Co-Axial movement. Being named the ’57 by Omega inevitably puts a little weight on its shoulders for obvious reasons. Inspired by the original CK2915 launched in 1957 (alongside the CK2913 Seamaster 300 and CK2914 Railmaster) the Speedmaster ’57 Co-Axial definitely bears resemblance to its legendary ancestor. 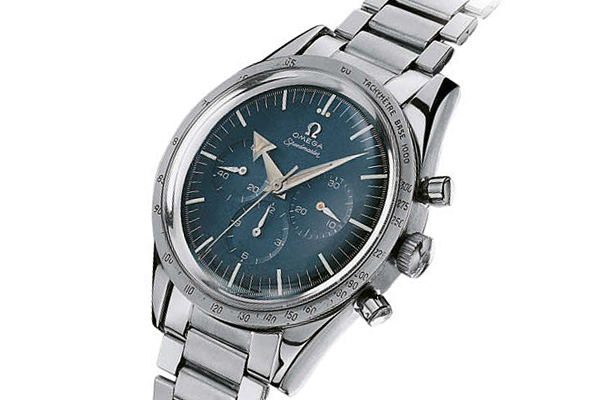 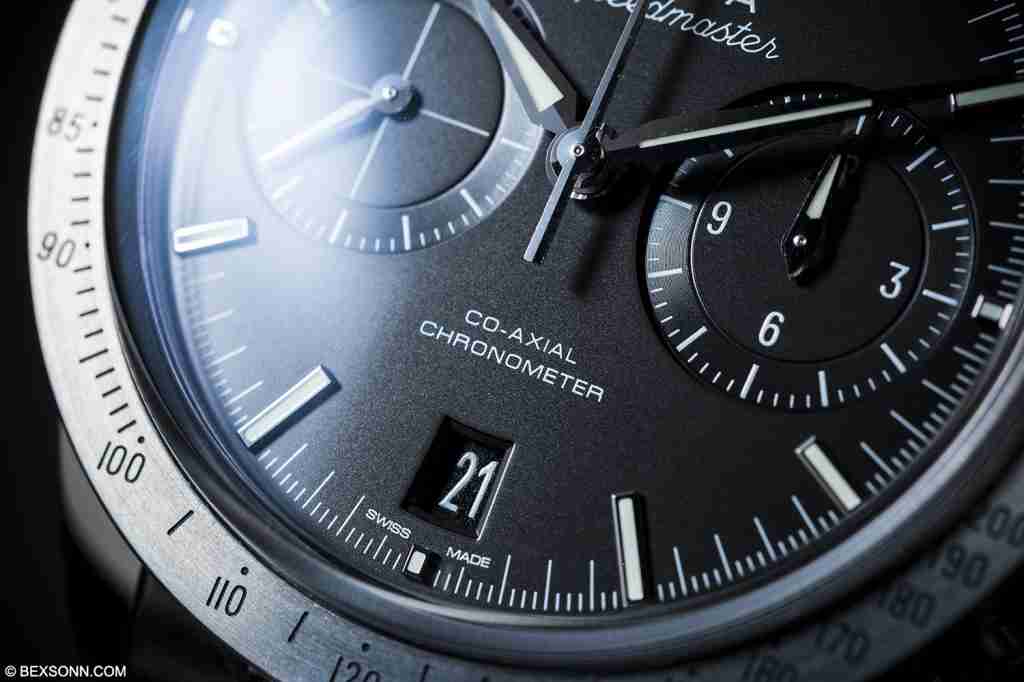 Straight away you’ll notice the dial layout is completely different to that of a ‘Professional’ Speedmaster or for even that matter a pre-moon/pre-professional Speedy too. However, it is more in-keeping with all the Speedmasters that now house the 9300 Co-Axial movement but even then there are subtle changes too. For instance the two sub dials appear to be larger than those seen on the Moonwatch Co-Axial Chronograph (ref. 311.30.44.51.01.002) and also the continuous minutes sub dial make use of crosshairs, like those seen on some of the previous Broad Arrow re-issue Speedmasters. You may also notice the use of Alpha hour and minutes hands, which is taken from the CK2998 instead of the use of ‘Broad Arrow’ hands from the original CK2915, though this is probably a good idea as it would’ve made the dial look cluttered and probably a little clumsy. 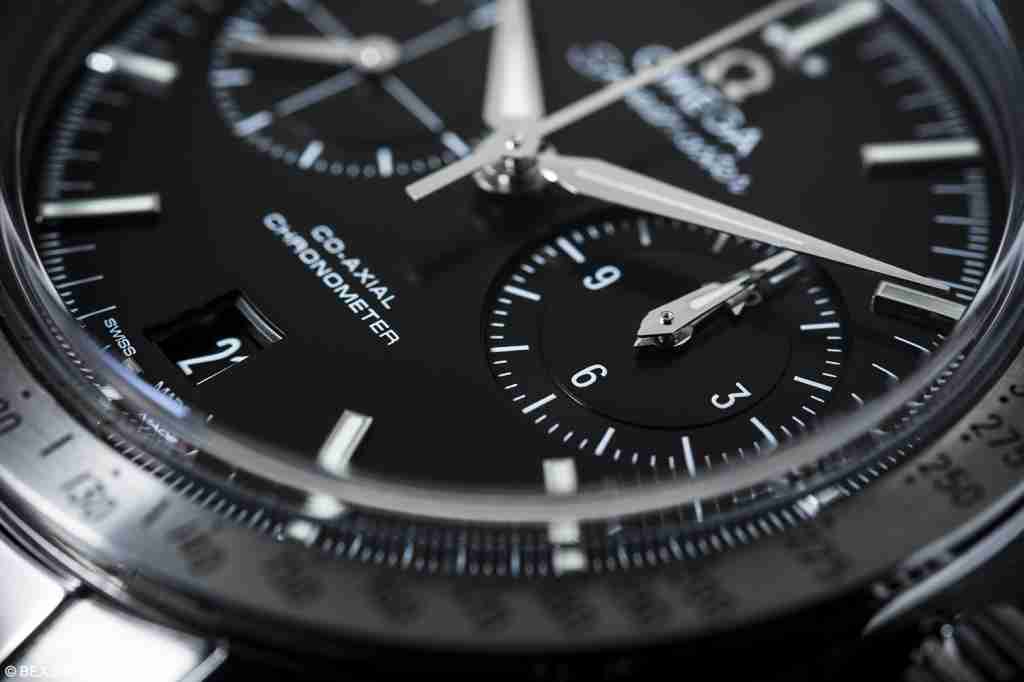 Though on the right, the recording hour and minutes chronograph sub dial, Omega have used ‘Broad Arrow’ hands which works very well providing a clean and clear reading of time accumulated, which I think is a very conscious design thought by the guys from Omega, as this incorporates the historic use of the ‘Broad Arrow’ hands. The rhodium-plated inlaid luminous indexes also appear to be a little shorter too but this isn’t hugely noticeable as the dial is more compact. The black PVD coated dial features a date window at 6 o’clock, which can be quickly set by using the jump hour function built into the calibre 9300. 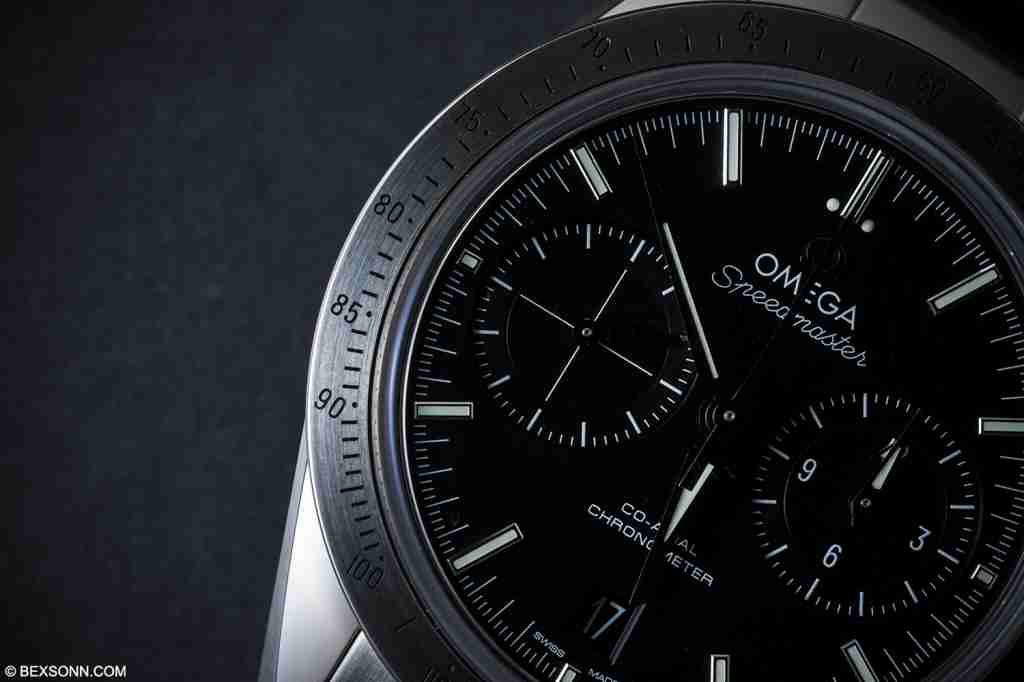 The Speedmaster ’57 Co-Axial we managed to get our hands on was the stainless steel version on a bracelet, though there are other variations of red-gold, yellow gold, titanium and various bi-metal combinations of: steel/yellow gold, steel/red-gold, with the added option of a bracelet or leather strap but you can’t beat a bit of classic steel-on-steel action. The Speedmaster ’57 features a 41.5mm case with a brushed steel Tachymetre bezel, which is in keeping with its vintage CK2915 ancestor – though enthusiasts, will notice the little detail that would probably have been nice to see, like a dot over the 90. The symmetrical case (for me) is just on the right side of perfect at 41.5mm though on the wrist it does wear a little bigger due to the sapphire sandwich and use of the Co-Axial movement. 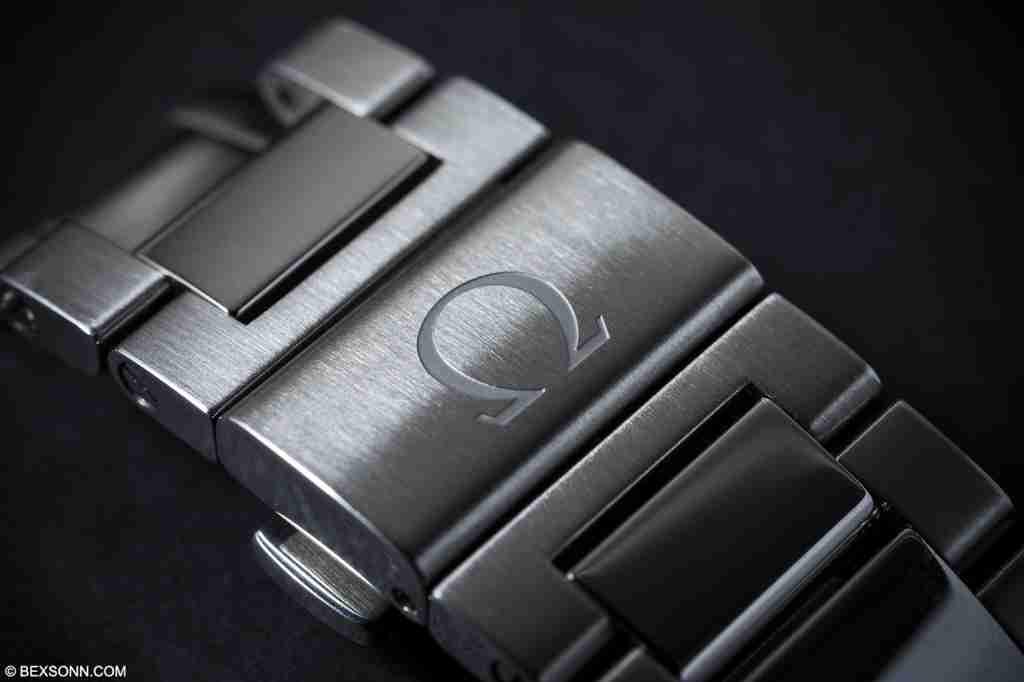 Like the Seamaster 300 Master we looked at, the Speedmaster ’57 also features polished lugs with brushed sides that are also in keeping with its 1957 historical predecessor. Covering the dial is domed, scratch-resistant sapphire crystal with anti-reflective treatment inside. The bracelet sports the same classic styling as the case with brushed outer links and polished centre links, though I’ve been told on the grapevine that you can get these centre links brush by Omega? The bracelet sports a double-folding locking clasp mechanism that is very secure and is operated by two buttons on the centre of the clasp. The case obviously features the non-crown guard design and pump-style pushers at 2 and 4 o’clock respectively. 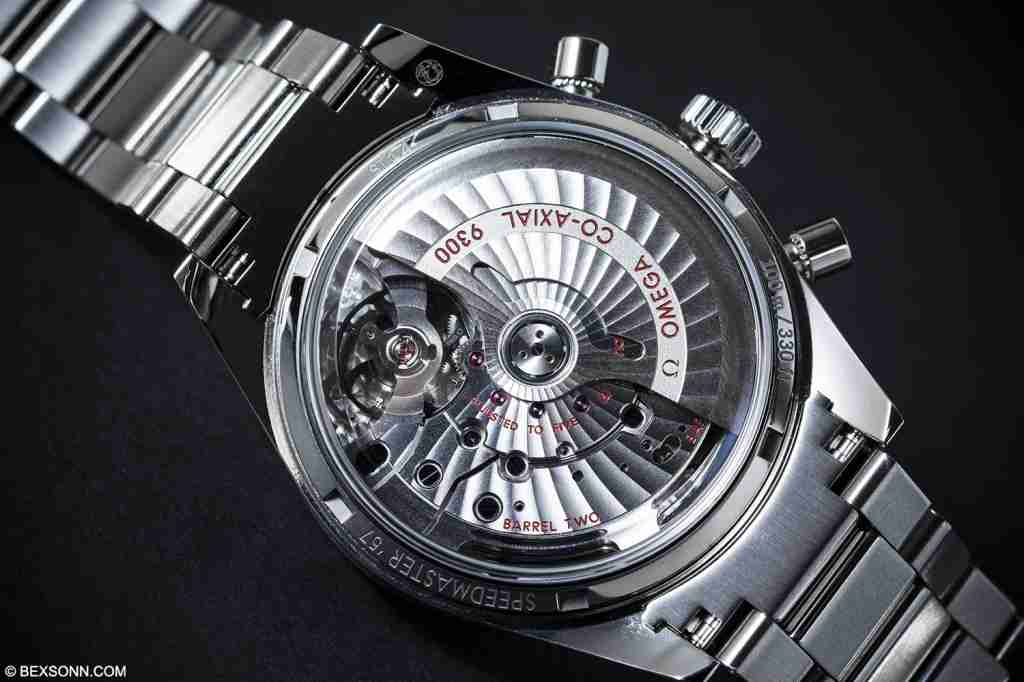 As mentioned above the Speedmaster ’57 is powered by the Omega Co-Axial calibre 9300 (with the gold versions making use of the calibre 9301, which uses a gold winding rotor and balance bridge) that is the first of Omega’s exclusive in-house Co-Axial calibres to incorporate a chronograph function. The calibre 9300 utilises a column-wheel chronograph mechanism with 12-hour and 60-minute counter hands placed on the same sub-dial at 3 o’clock. The two chronograph control pushers function totally independently – accordingly, there is no risk to the chronograph mechanism as a result of inadvertent manipulation. Operating the chronograph movement via the start/stop and reset pushers’ does feel very crisp, with solid feedback. 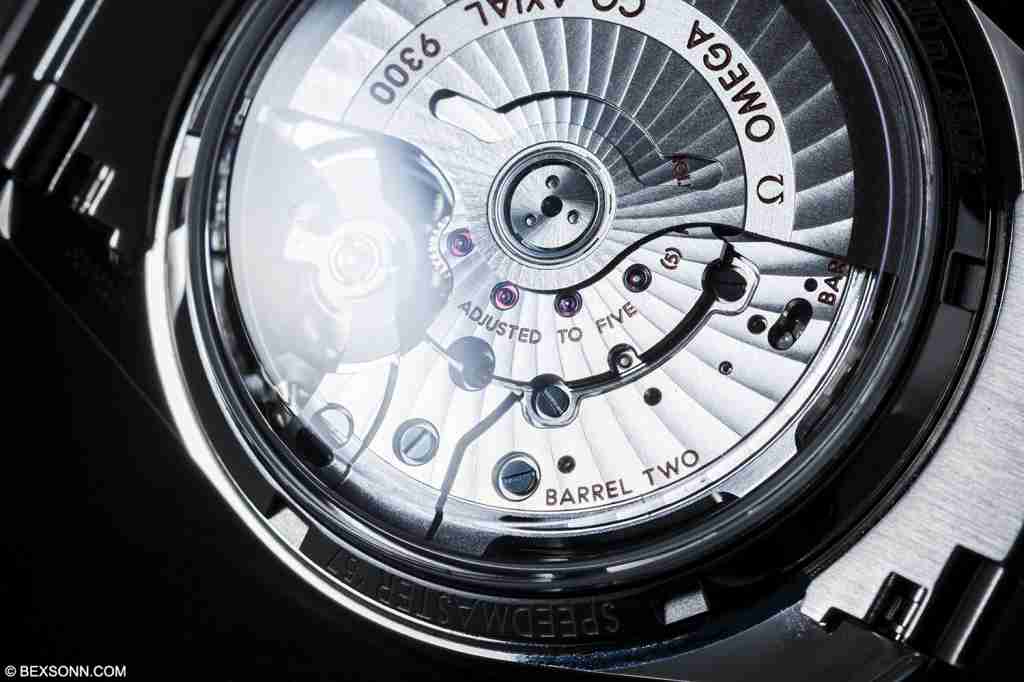 The self-winding calibre 9300 utilises a free sprung-balance with silicon balance spring (non-magnetic so it is not influenced by magnetism), with two barrels mounted in series providing a power reserve of up to 60 hours. The bridges and oscillating weight have been decorated with exclusive Geneva waves in arabesque.

The Speedmaster ’57 Co-Axial will divide opinions and that is fine because I think those that aren’t fully on board with what Omega are doing still have options to choose from Omega’s Speedmaster range. Admittedly, I was actually quite surprised by how large the Speedmaster ’57 felt on the wrist but this was most probably because I went from wearing my Speedy Pro to this and as informed by friend and fellow watch blogger Robert-Jan “always use an interim watch size before going larger”. And as mentioned even though technically it is smaller than the Moonwatch, because of the in-house automatic Co-Axial movement it adds a bit of height and not to mention the use of a sapphire crystal case back, making the watch feel all-round a little larger. Though I don’t think the size of the watch is what will divide people’s opinion but in fact the price and other Speedmaster options available. 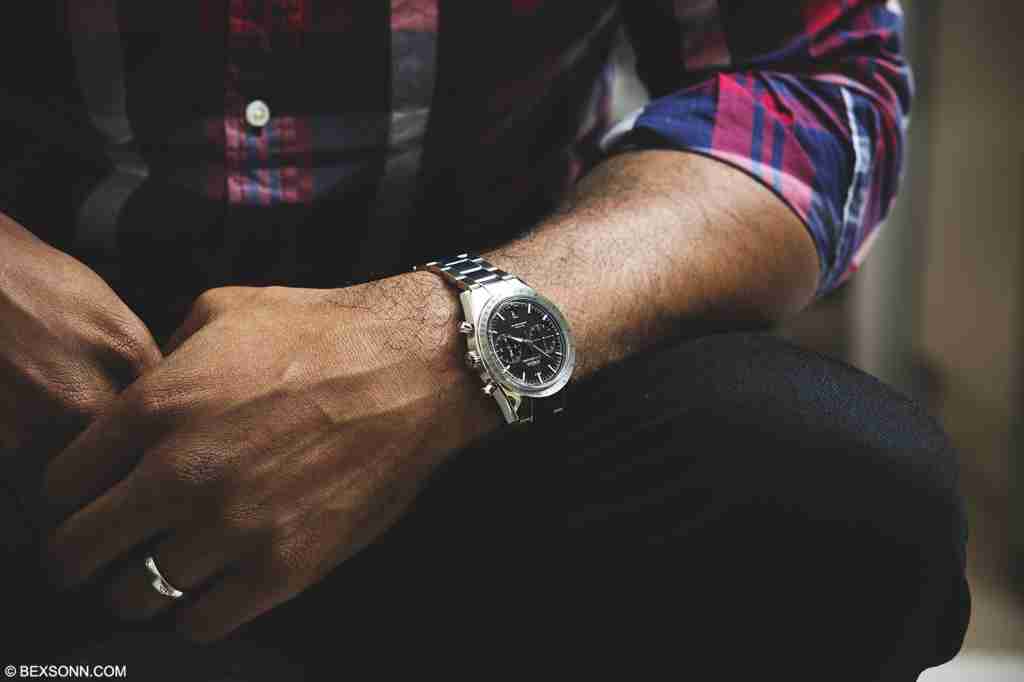 You see, the starting prices of the new Omega Speedmaster 9300 Co-Axial era is altogether different to that of the Moonwatch but the best thing to actually do is compare it to watches in its class from other brands – of the so called big 3 – and I think you’ll start to realise the Speedmaster ’57 is appropriately priced and even better value for money when you consider it houses a Co-Axial movement. Then there are the other options you have from the same Speedmaster range that enthusiasts will say pay more tribute to the CK2915, for instance the ‘First Omega in Space’ but do keep in mind this utilises the same movement as the ‘Professional’ Speedmaster (calibre 1861). What Omega have created here is a Speedmaster for those that are looking for a good all-rounder and the collector that is looking for a daily wearer that is just a little off-piste but still incorporates Omega’s new technology with greater variation in regards to materials and dial colours. Though Speedmaster aficionados will probably rather invest this type of money into a Vintage CK2998 or 105.002, I think the Speedmaster ’57 will still tick a lot of the correct boxes for many. 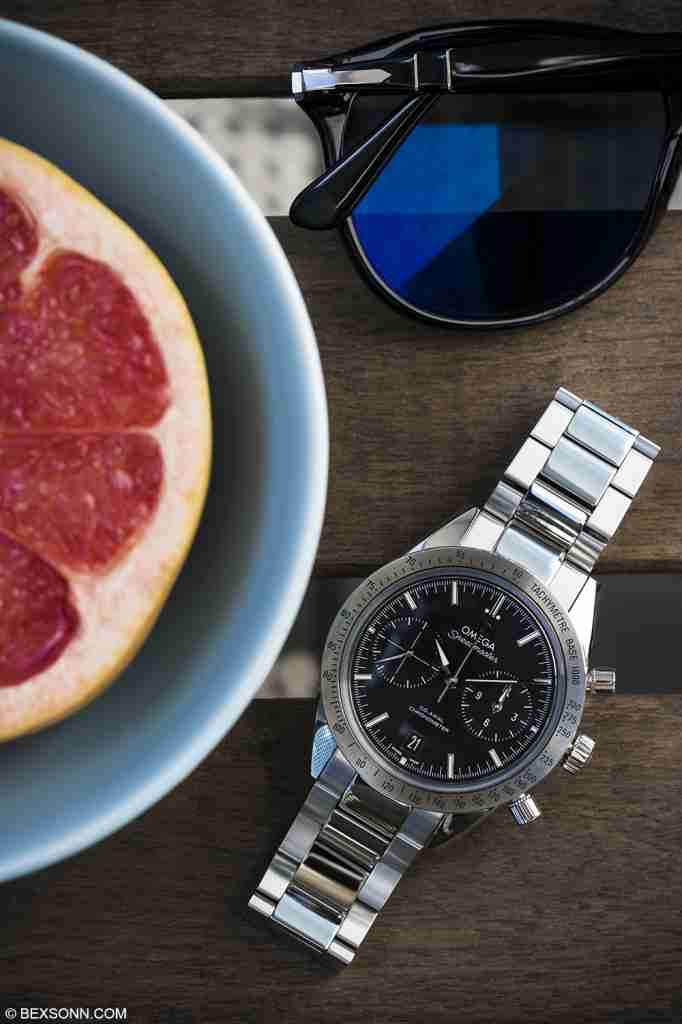 As mentioned above the Speedmaster ’57 comes in 6 different versions. stainless steel, titanium, red-gold, yellow gold and various bi-metal combinations of: steel/yellow gold, steel/red-gold. The stainless steel version with black dial and bracelet, that we managed to get our hands on, has a price tag of £5,690 and as mentioned when compared to chronograph timepieces with in-house automatic movements, it is very reasonable.

For more information on the new Speedmaster ’57 Co-Axial, visit the official Omega website. 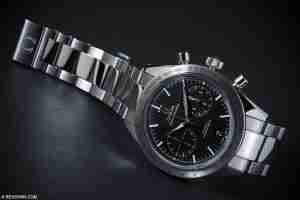 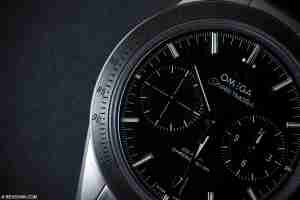 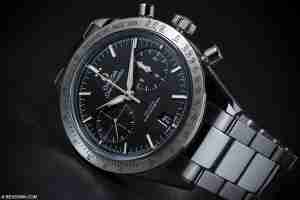 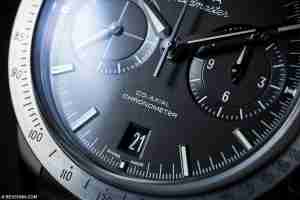 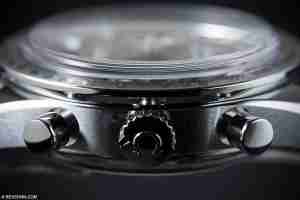 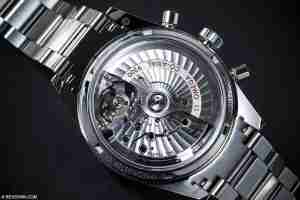 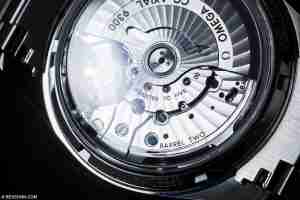 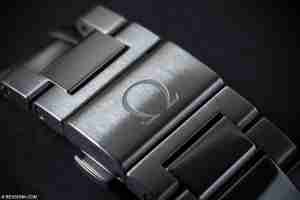 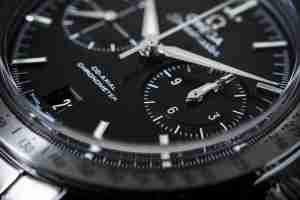 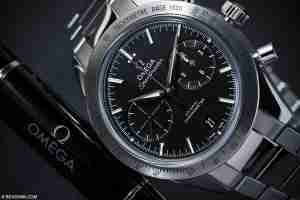 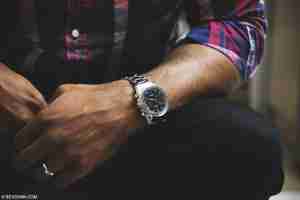 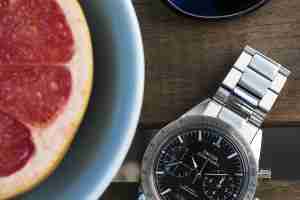