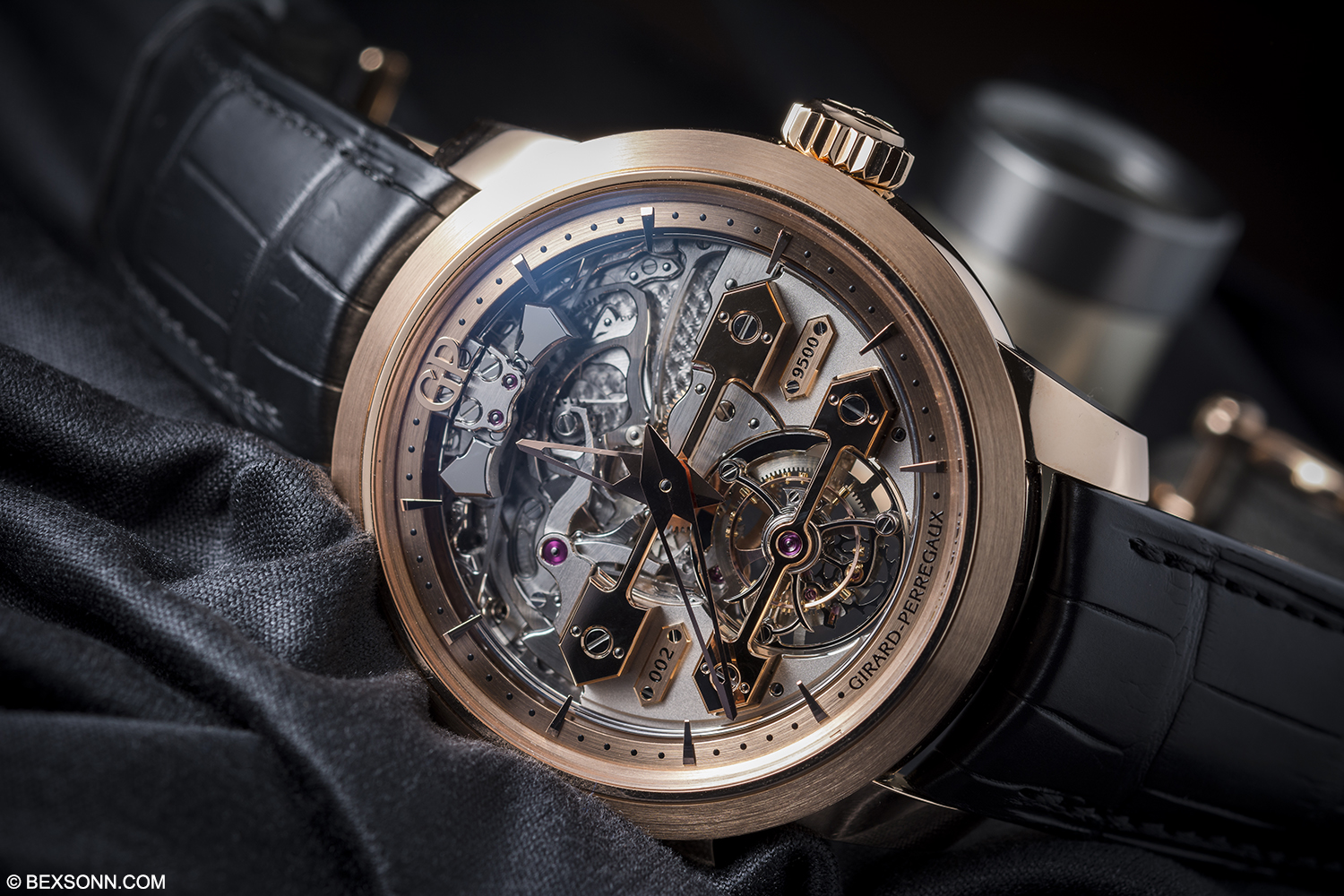 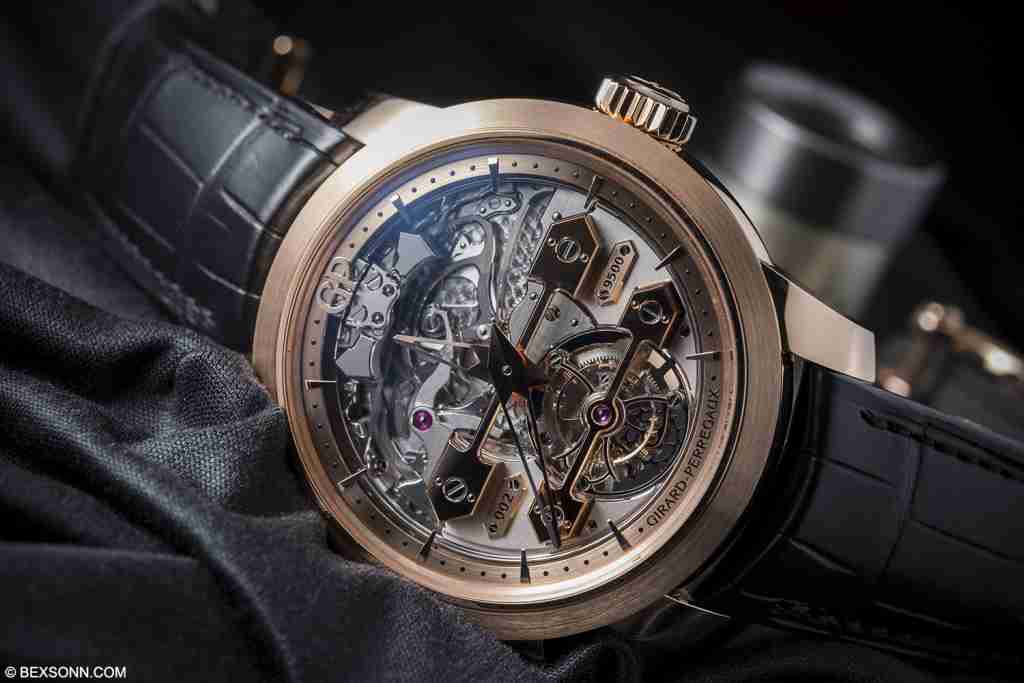 Girard-Perregaux Minute Repeater Tourbillon with Gold Bridges: Undoubtedly, the Girard-Perregaux Minute Repeater Tourbillon with Gold Bridges bares the heretical traits of its kin, the Neo Tourbillon with Three Bridges DLC Titanium. Girard-Perregaux have been manufacturing luxury watches since 1791 in La Chaux-de-Fond, Neuchâtel. The watch manufacture has consistently perpetuated their deep rooted connection to horological virtuosity, never forsaking mechanical precision for aesthetic pleasures. Thus, bridging an accidental or intentional void between the watch brand and its place of conceptual and residing residence, which in English translates as ‘lime-land’ meaning to spread a calcium compound on the land to improve growth. The same way in which Girard-Perregaux craft their creations to epitomise the pedestal of watch craftsmanship. 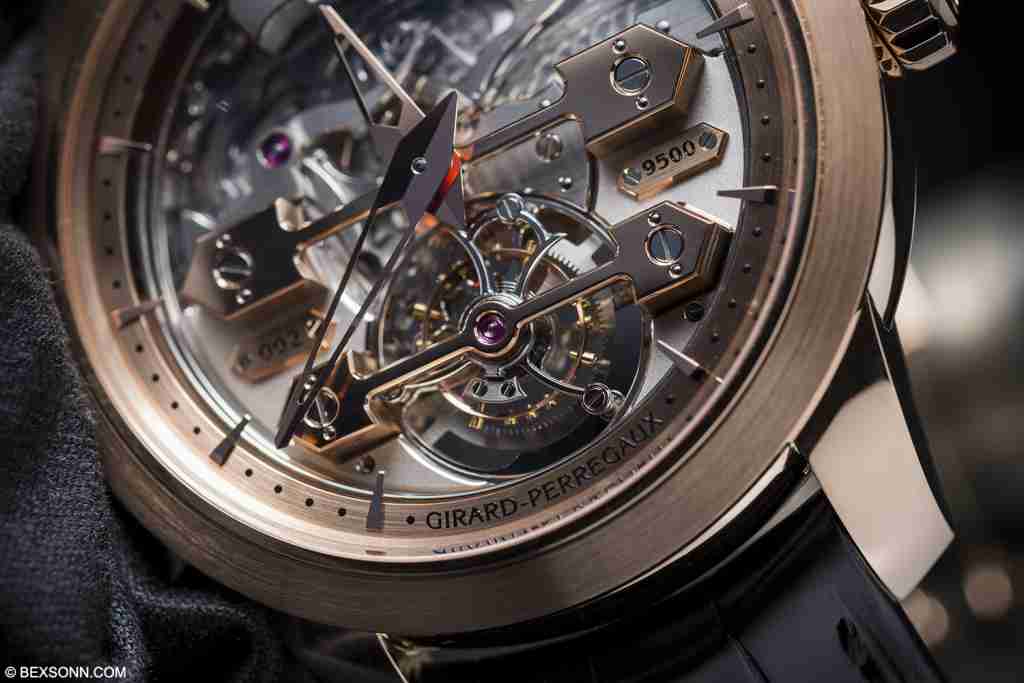 The watch features a skeleton tourbillon rotating once every minute with two 18-carat pink-gold arrow-head bridges on the front and a single arrow-head 18-carat pink-gold bridge visible on the reverse. Originally, the 37 jewelled tourbillon complication was an attempt to improve accuracy and a demonstration of watch-making prowess. Fast forward a few centuries and this is no longer the case, due to mechanical advancements, however, the inclusion of such mechanisms are now singularly common among luxury watch manufacturers to demonstrate superior craftsmanship. The tourbillon makes use of a gold balance wheel and a variable inertia flywheel, drawing the eye to appreciate the artistry and improvement more closely. The variable inertia flywheel, used to regulate the speed of the hammer’s striking speed, is the only undetectable component of the timepieces movement. 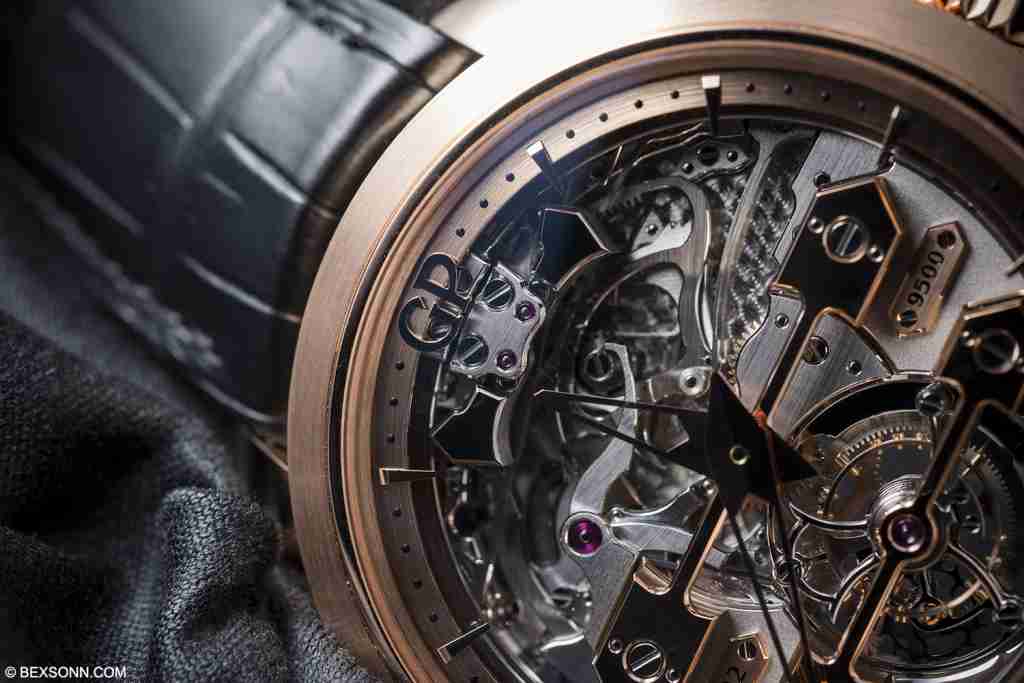 The timepiece offers the original concept to simultaneously witness both sides of the movement’s mechanisms oscillating. The hammers that produce the individual sounds of the; low tone hours, the combined high and low tones of the quarter hours and the high tone of the minutes, by striking the 20AP steel gong wires, which can be seen spiralling skilfully round the blushing gold inner bezel.

Prior to the 1700s,  several solutions to improve sound had been tried and tested, but to no avail, until both Edward Barlow and Daniel Quare pioneered the miniature minute repeater mechanism utilized for a pocket watch. However, idiosyncratically enough, Girard-Perregaux chose to disregard all previous existing solutions, as none of them succeeded in captivating the musical sound-bud of the ear nor did it permit the wearer to view both faces of the movement. 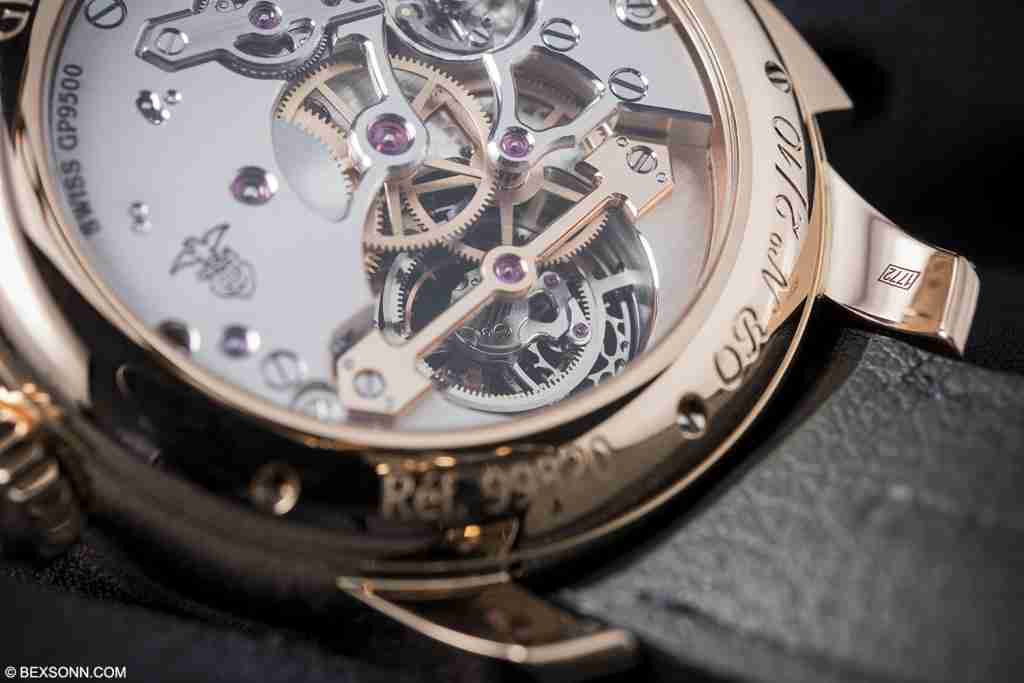 Whilst maintaining classic signatures of haute horologerie requirements, the Minute Repeater With Gold Bridges exhibits the 2  bridges on the front and the third bridge on the reverse, additionally, it presents the tourbillon and astoundingly also the majority of the components that comprise and enable the minute repeater to chime in all its vociferous audibility. This impressive abstraction was achieved by tireless engineers re-designing and hand-crafting the construction and operation of the manual-wind calibre GP09500-0002. 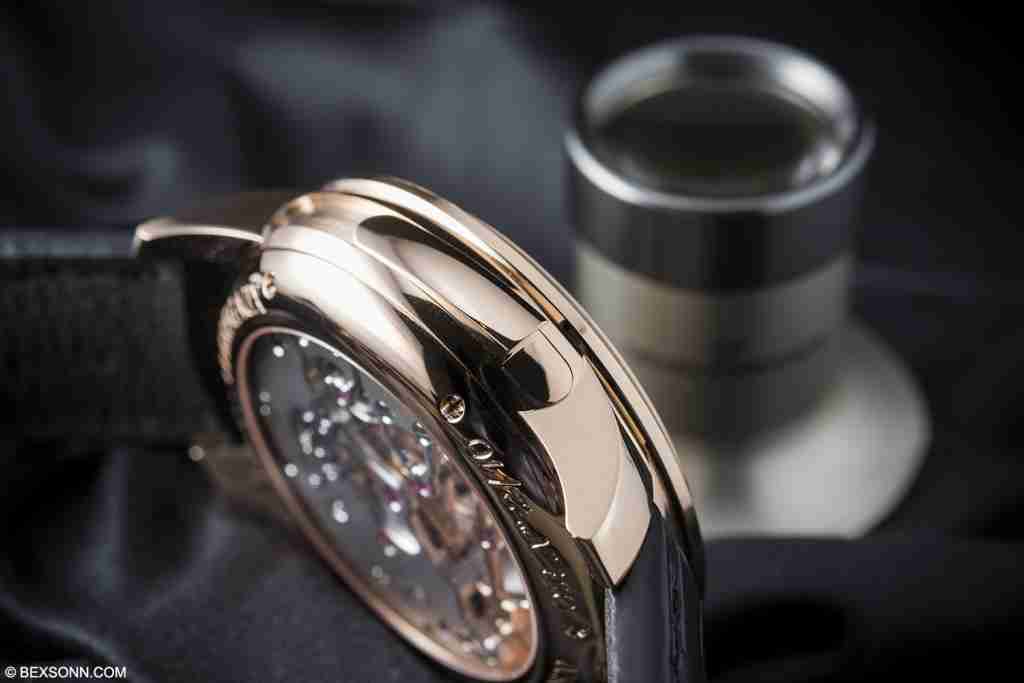 The bewitching nature of the main attraction of the watch movement, is thanks to a sliding bolt, traditionally placed at 8 o’clock on the left hand side of the case-band, causing the sliding trigger-piece to rewind the spring contained in the minute repeater barrel. Once the maximum limit has been attained this minute repeater winding mechanism releases the “on-off” control, a component designed to halt the hammer, whose shape is inspired by the gold bridges first patented in 1884. This prevents the hammer from striking and giving an inaccurate indication of the present time. The positioning enables the acoustic waves earlier commended, to reverberate without being captured and confined by the proximity of the wearers’ skin, a pre-meditated contingency by the watchmakers as a platform for sound wave absorption. 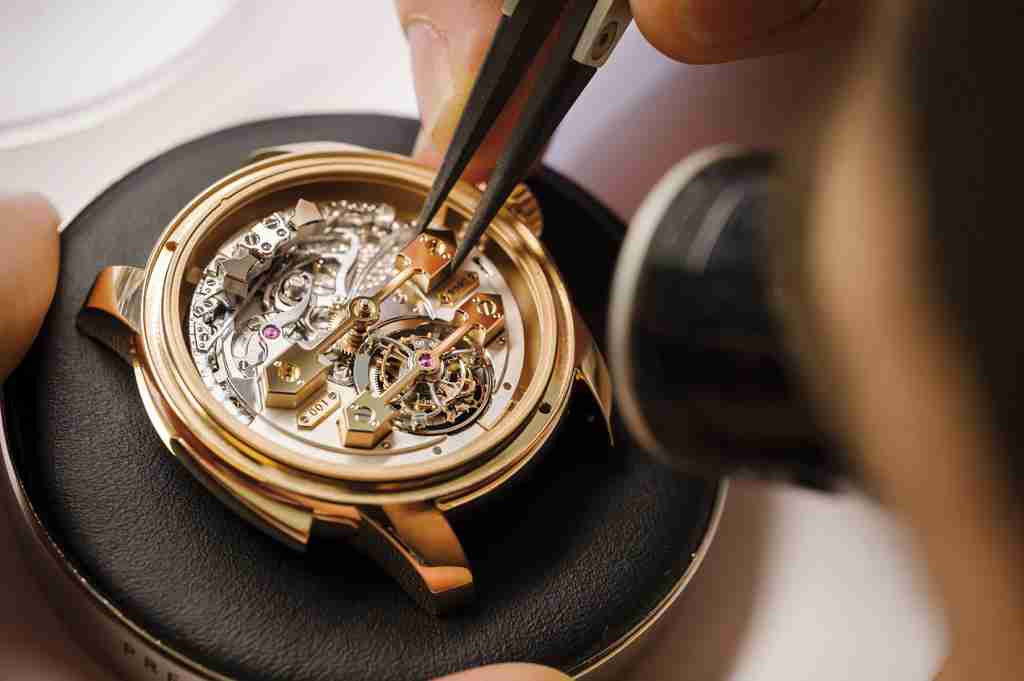 The choice of position of components within the movement allows for optimum melodic sound quality in clarity and volume, portraying the focus of; efficiency on par with beauty to be at the forefront of the craftsman’s mind. Many other watchmakers in the past and present, have and do struggle to harmonise strong, clear sound from a wrist watch equipped with a minute repeater movement. The marking plates on the back are also constructed in 18-carat pink gold, coupled with Girard-Perregaux shield engraved on the back of the movement. Meanwhile, the exposed parts of the movement through the dial is finished with a turn hobnail pattern. The entirety of the small components are made from black polished tempered steel and bevelled to underscore the exceptional design inspired by the Three Bridges watch. 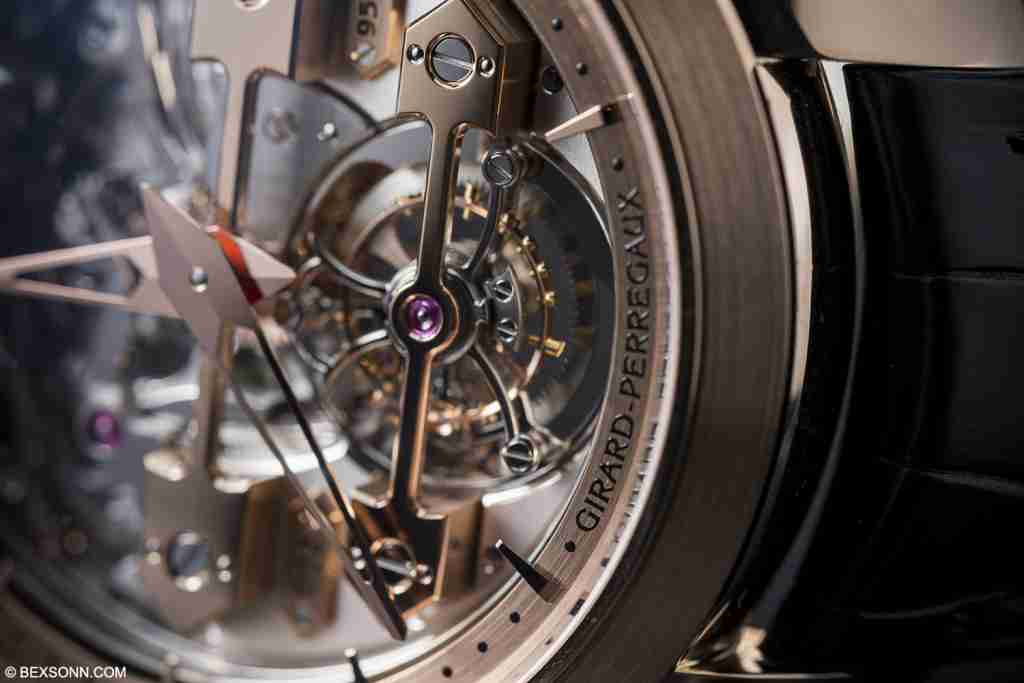 The complexity of the manual-wound movement can be seen skirting the sharp, cone-shaped pink-gold hour markers and are exhibited through sapphire crystal. The case measures 45mm, large enough to accommodate the 406 components, which as mentioned, are also designed to act as a volumetric arrangement, emulating the sounding box on a musical string instrument.

The 32mm calibre possess a power reserve of 58 hours and pink gold skeleton watch hands, it reads ‘Girard-Perregaux’ in black script where one would typically find the hour of 6 o’clock. The minute markers are minute black dots neighbouring the sizeable pink-gold bezel, fixed to an adorned case band which cascades into coved slender lugs. The timepiece is secured to the wrist by a black hand-stitched leather alligator strap and closed with a triple folding clasp. 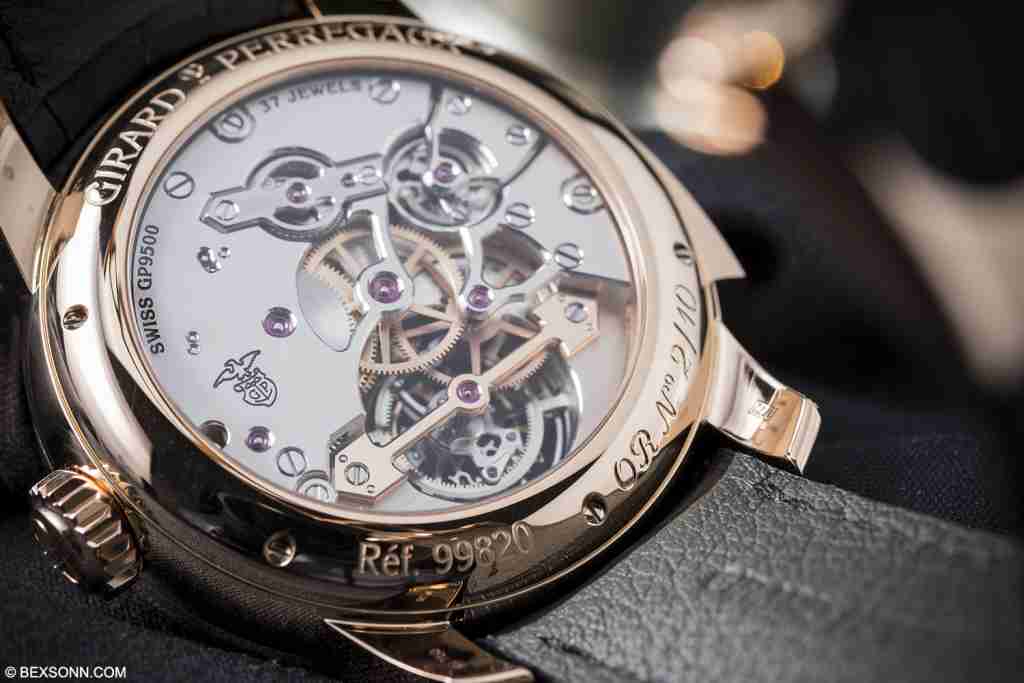 This timepiece openly expresses Girard-Perregaux’s mechanical gratification by flaunting the mastery of the unconcealed timepiece, eponymous of the quote ‘Some are born great, some achieve greatness and some have greatness thrust upon them’, created in the heart of innovation, nurtured by an avidly ferocious horologist and popularised by a rightly ambitious luxury watch manufacture.

The Minute Repeater Tourbillon with Gold Bridges will be available to purchase in July this year and will cost approximately €318,000 excluding VAT. For more information, visit the official Girard-Perregaux website. 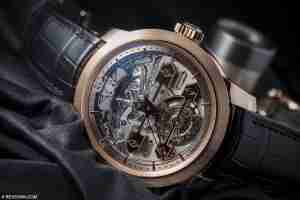 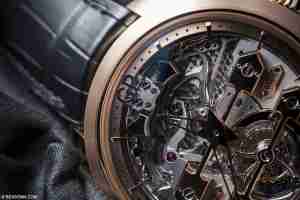 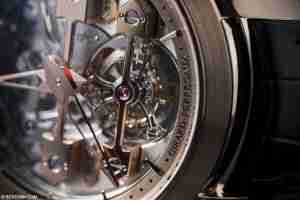 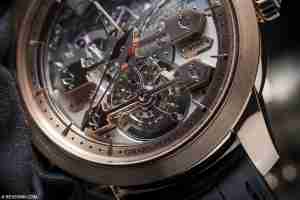 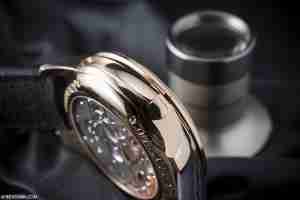 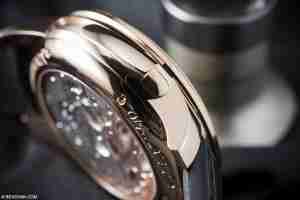 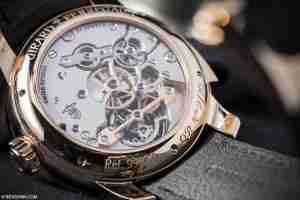 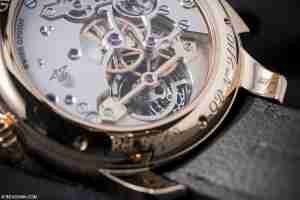 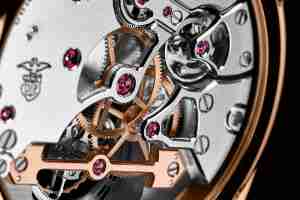 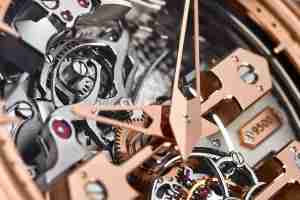 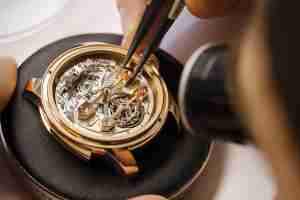 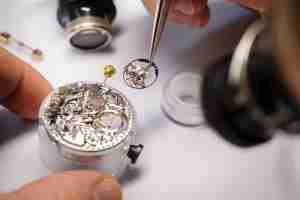