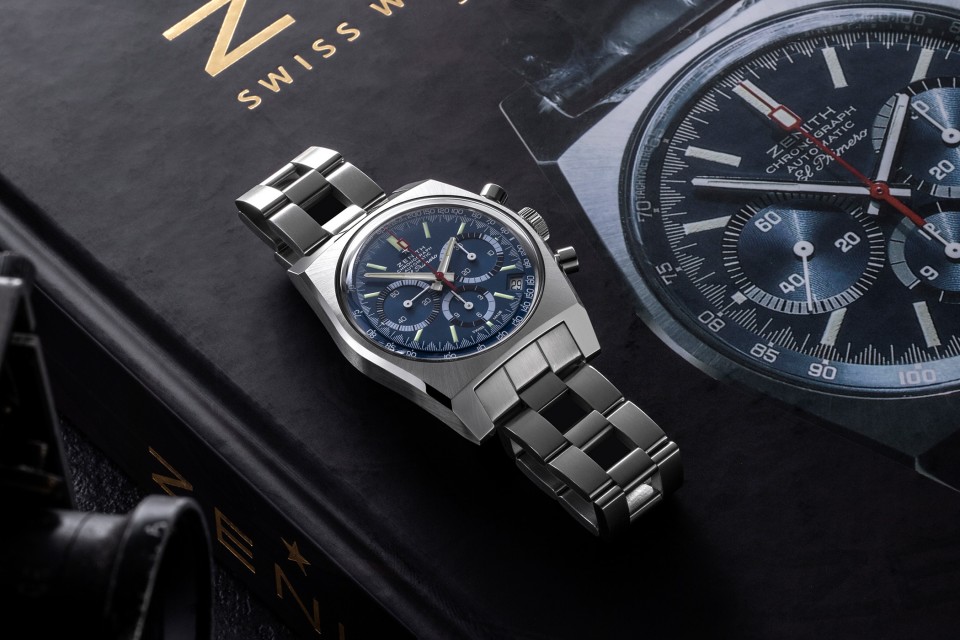 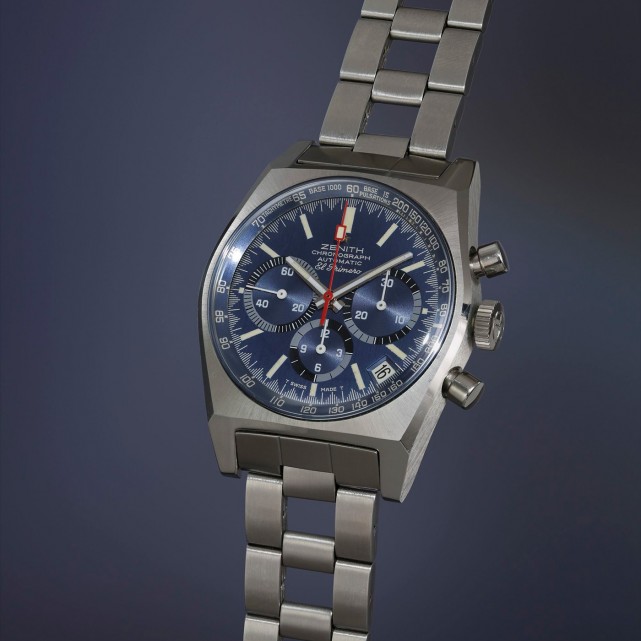 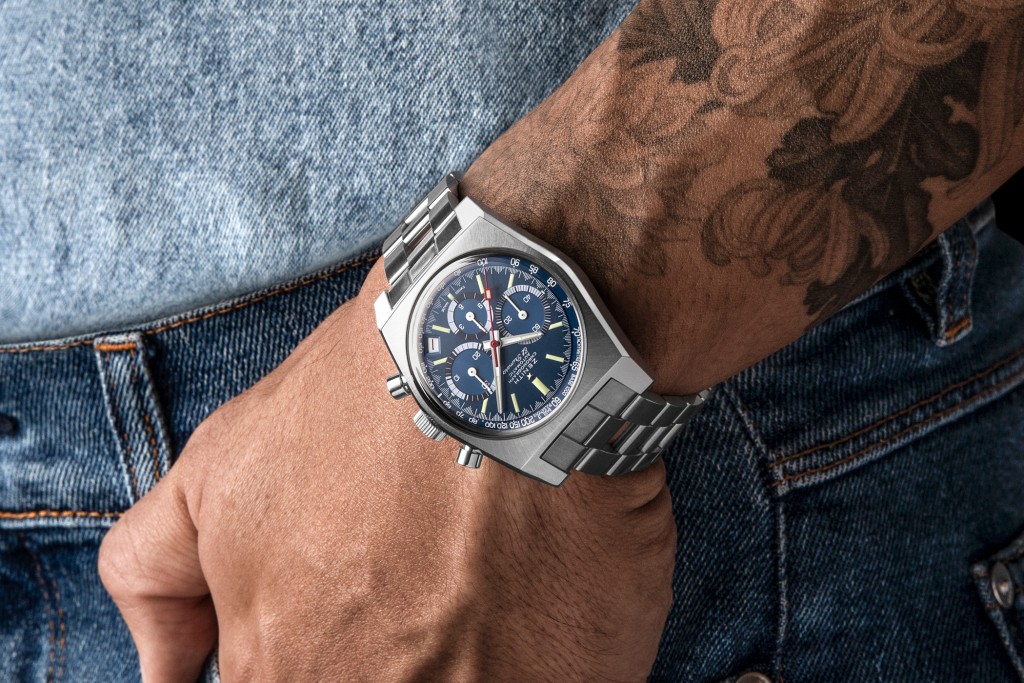 To be more specific, the exact reference number this revival model is based on is the A8318; otherwise known as “Cover Girl”, thanks to its appearance on the front of Manfred Rössler’s book Zenith: Swiss Watch Manufacture Since 1865. However, the reason as to why the watch ended up on the cover of Manfred Rössler’s Zenith book is actually rather straightforward; the man himself simply loved blue dials. Though, I think what is rather cool is just how uniquely different the dial is and also displays the era from whence it came.

The A384 case, which was re-released last year, is enjoying quite the renaissance and this year has seen the addition of the famous ladder bracelet. The 37mm tounneau shape of the A3818 is emblematic of the era in which it was born, featuring multiple facets and curves creating the required vintage-retro look, which has been perfectly distilled in this latest Zenith x Revolution special edition A8318 revival. 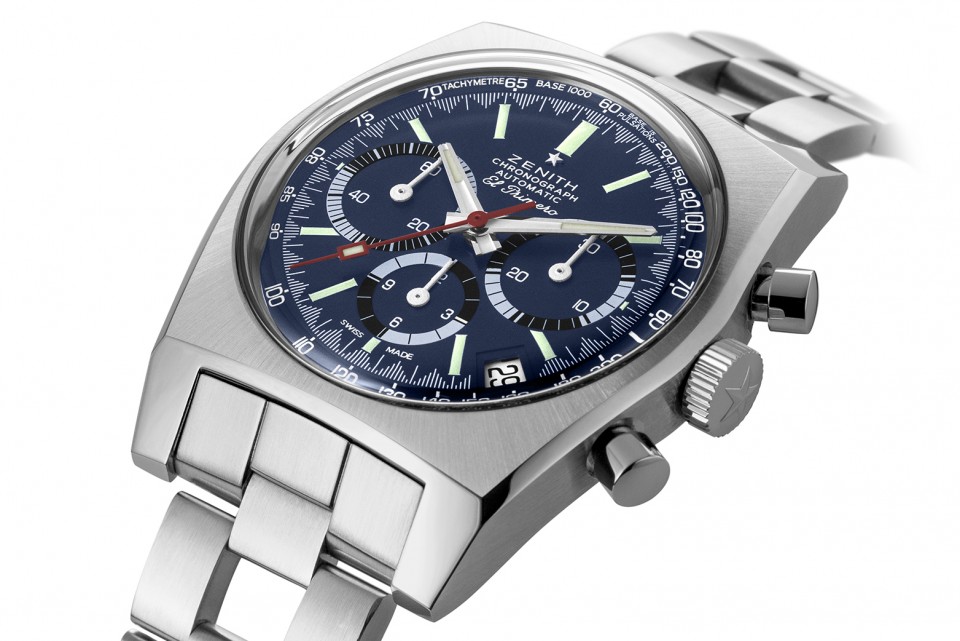 The satin blue dial of this revival model has been meticulously re-created and most importantly, features the iconic stepped or uneven racing track demarcated with thin radial lines that look like a shark’s tooth. These tiny lines, designed almost like a soundwave, lead the eye towards the integrated pulsation and tachymeter scale above the minute track. However, it is important to note that there are precisely 300 of these ultra-thin markers on the dial, which serves a purpose. 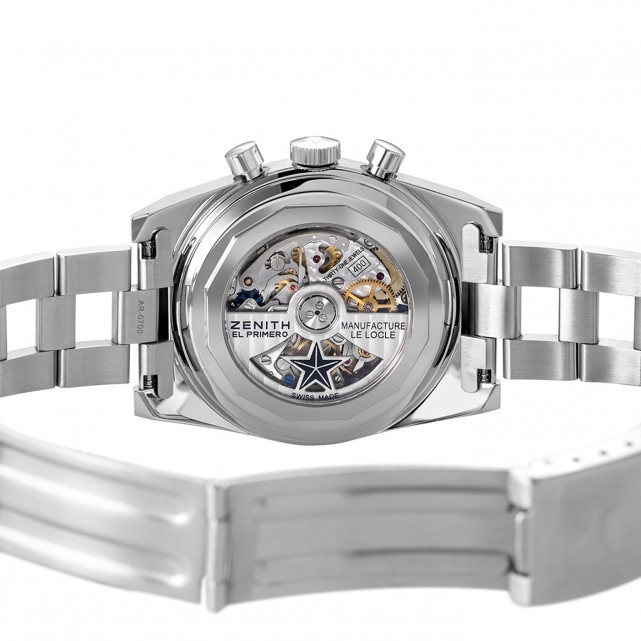 The A8318 “Cover Girl” houses Zenith’s El Primero chronograph calibre 400, which is capable of 36,000vph – thus having 300 of these ultra-thin markers on the dial, allows you to read the chronograph seconds to an accuracy of 1/10th of a second. 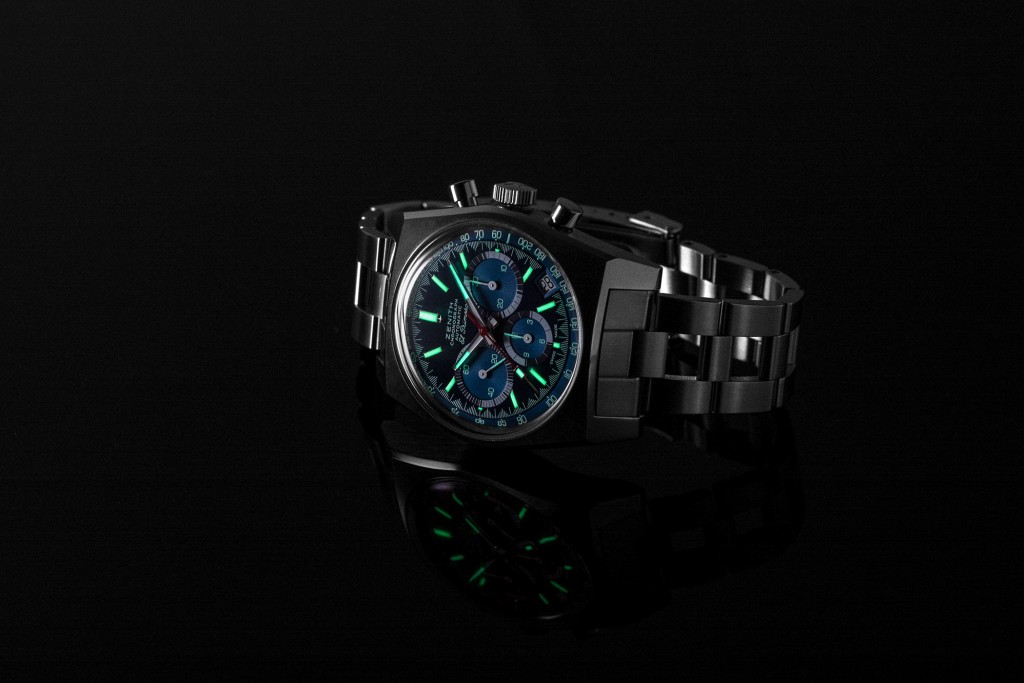 This Zenith x Revolution Magazine collaboration is a stroke of genius – reviving one of Zenith’s most adored models perhaps comes at the most perfect time for the watch industry and even the brand itself. That said, it is important to note that The Revolution consciously chose to keep the same clean design of both the case and the dial of the original model. The guys at Revo even brought back the ladder bracelet to keep it as close to the original as possible – keeping the A8318 “Cover Girl” revival as pure as original as possible.

The Zenith x Revolution Chronomaster Revival Ref. A3818 “Cover Girl”, is limited to 100 pieces worldwide and is priced at $8,100. It also comes with an additional beige strap and blue racing strap, for more information visit revolution.com.