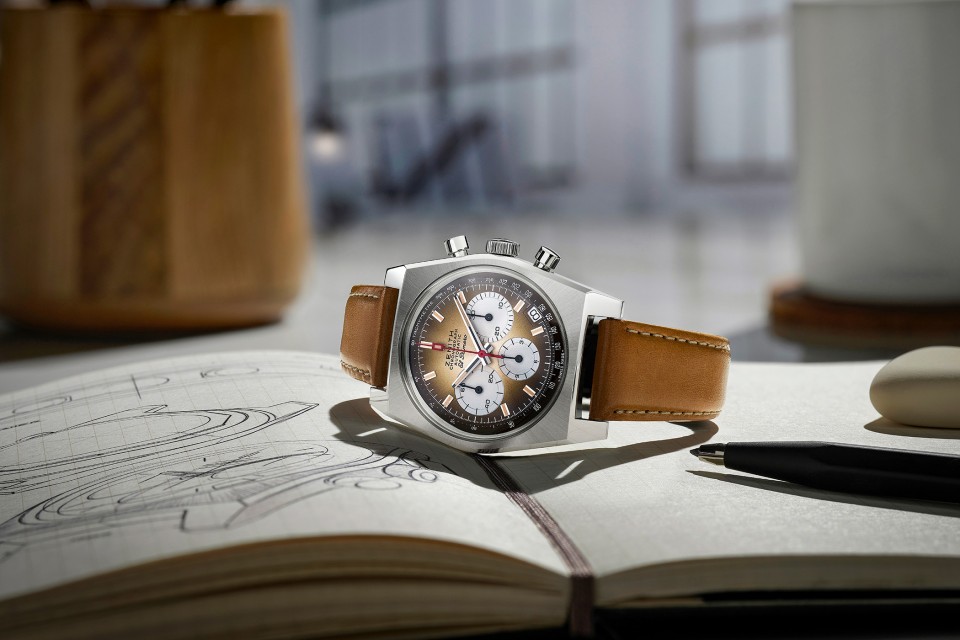 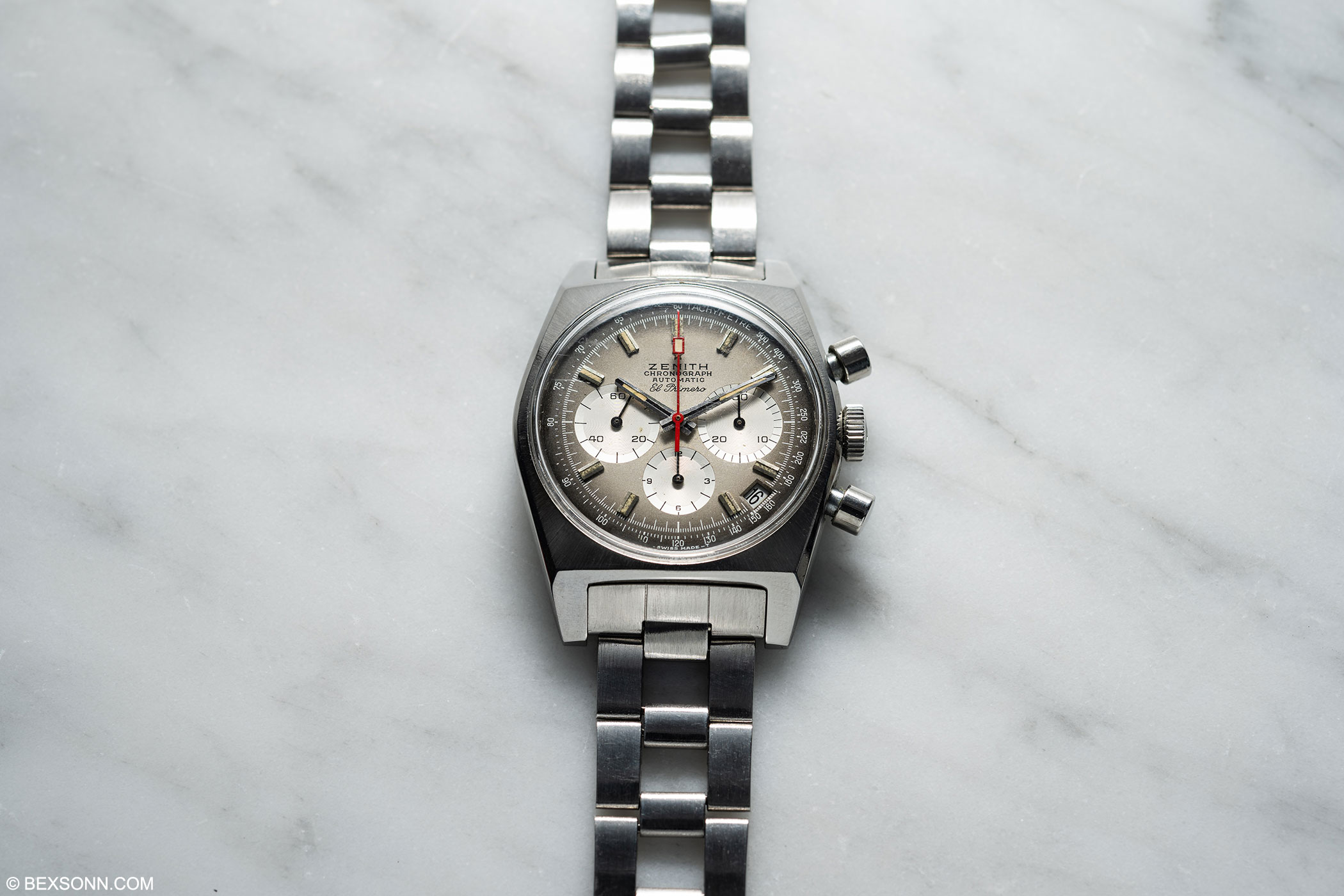 The El Primero is a legend within its own right but there is a much debated story behind it. During the early 1960s there was a race on to see who could create the world’s first self-winding (automatic) chronograph. There were of course a few companies that shared an interest in claiming this technological breakthrough: Heuer/Buren-Hamilton/Breitling. However, there were a couple of silent watch manufactures working on this advance too: in the Far East was Seiko, who were busy working on their own version and then there was the company from Le Locle; Zenith. While there is a debate on who was first, there’s no doubt that Zenith were first to announce the El Primero, with three different references. The A386, the A384 and of course the model that is the basis for this revival, the A385. 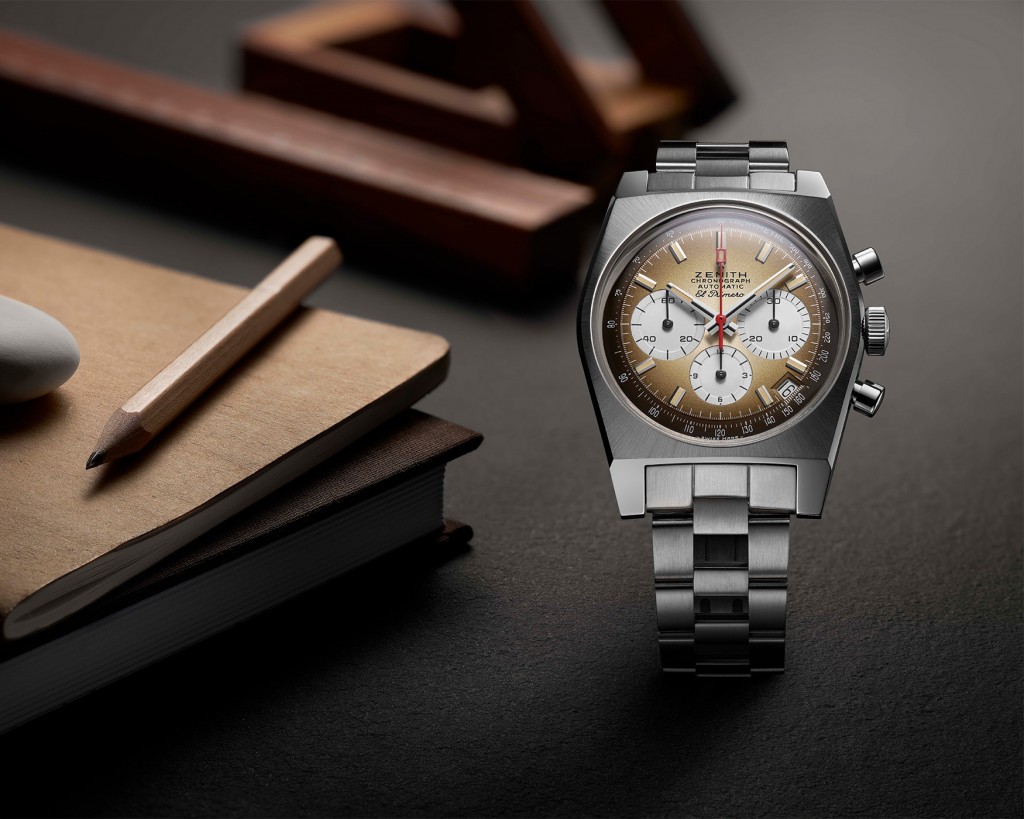 What made the A385 truly standout was its smoked brown gradient dial with a vignette effect that blackens towards the edges and provides a striking sense of visual depth, as if the dial was domed. For this Chronomaster Revival piece, Zenith sought to recreate the same warm tones and gradient effect, almost indistinguishable from the original with its red chronograph central second hand and silvery-white chronograph counters.

The A384 case, which was re-released a couple of years ago now, is enjoying quite the renaissance and last year saw the addition of the famous ladder bracelet. The 37mm tounneau shape of the A385 is emblematic of the era in which it was born, featuring multiple facets and curves creating the required vintage-retro look, which has been perfectly distilled in this latest Zenith El Primero A385 revival.

The smoked brown gradient dial with a vignette effect of this revival model has been meticulously re-created. Furthermore, in-keeping with the retro theme, the Chronomaster Revival A385 is available in two options that could have come straight from 1969: The first is the steel “ladder” bracelet, a modern remake of the Gay Frères bracelets that became emblematic of the early El Primero watches. The second option is a light brown calf leather strap that will develop a unique patina with wear and time.

The Revival A385 houses Zenith’s El Primero chronograph calibre 400, which is capable of 36,000vph – allowing you to read the chronograph seconds to an accuracy of 1/10th of a second.

This Zenith El Primero Chronomaster Revival A385 is a gorgeous thing in my humble opinion – reviving one of Zenith’s most adored models perhaps comes at the most perfect time for the watch industry and even the brand itself. The dial is warm and inviting, while the tonneau case evokes a 70s design that isn’t too out of touch in these modern times. We shall try and get our hands on an example for a full in-depth review before we share our personal and honest thoughts on this new release from Zenith.

The Zenith El Primero Chronomaster Revival A385, doesn’t appear to be limited like some past models and is priced at £6,700 on a strap and £7,100 on the bracelet. For more information on this new release, visit zenith-watches.com.