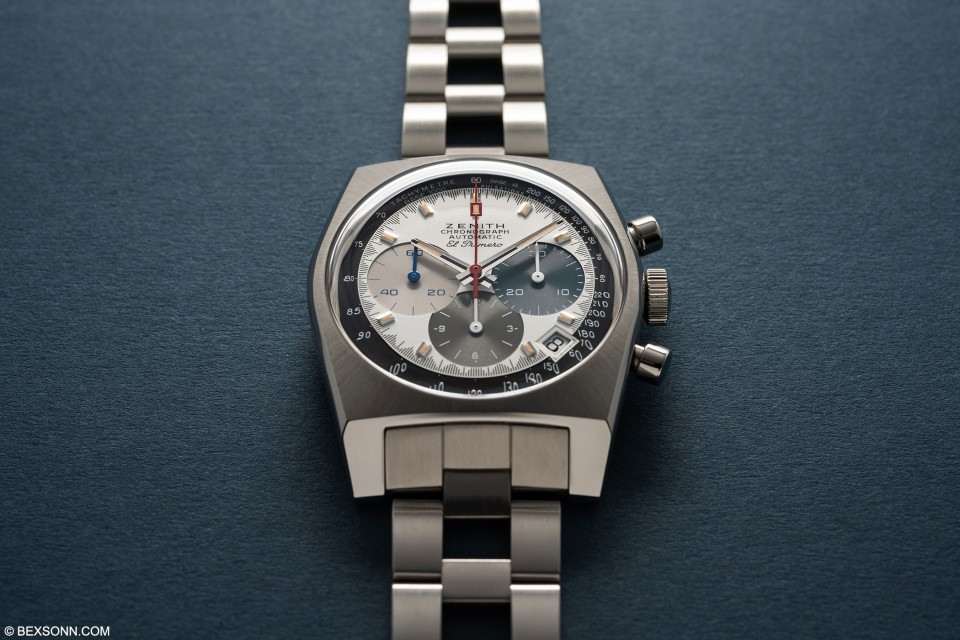 Zenith has been on a bit of a roll lately with their re-editions and not too long ago they introduced one of their latest re-edition timepieces and luckily for us, we were able to get our hands on an example to get up close and personal to see if this recreated El Primero was all we expected it to be? As you know, the Zenith El Primero is quite simply one of the most important chronographs in watchmaking history. I’ve previously mentioned before that chronograph watches have been around since the 19th century, but it wasn’t that long ago that automatic chronographs were introduced. It was only as recently as the 1960s that there was a push to invent an automatic chronograph and while Zenith can be considered the first, it wasn’t quite that straight forward.

The El Primero is a legend within its own right but there is a much debated story behind it. During the early 1960s there was a race on to see who could create the world’s first self-winding (automatic) chronograph. There were of course a few companies that shared an interest in claiming this technological breakthrough: Heuer/Buren-Hamilton/Breitling. However, there were a couple of silent watch manufactures working on this advance too: in the Far East was Seiko, who were busy working on their own version and then there was the company from Le Locle; Zenith. While there is a debate on who was first, there’s no doubt that Zenith were first to announce the El Primero, with three different references. The A386, the A385 the basis for the A3817 and the A384. 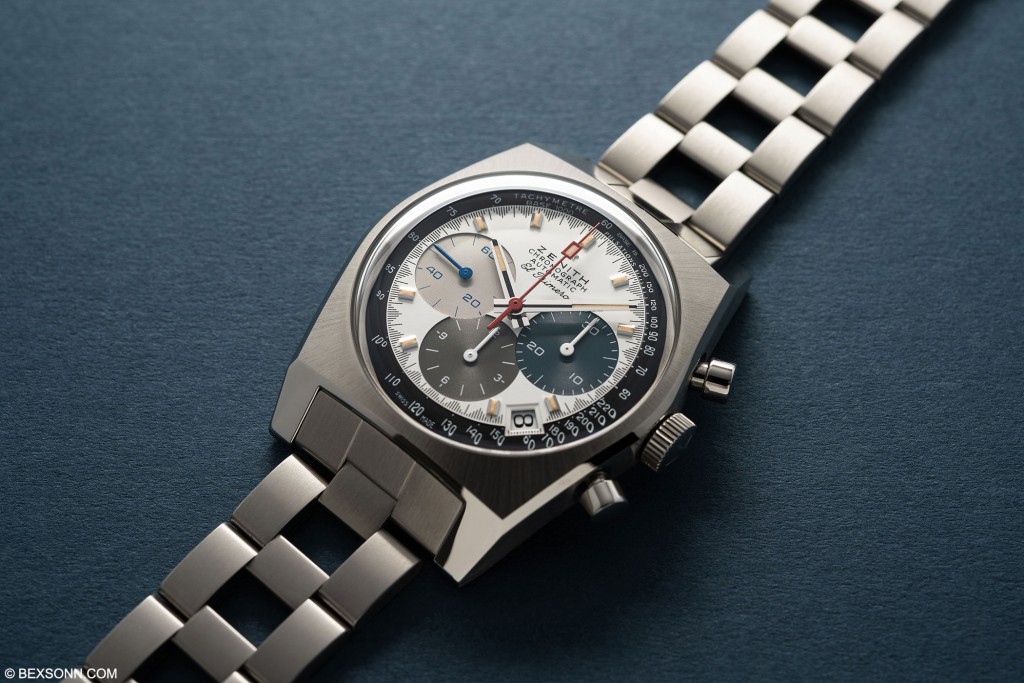 The Zenith El Primero ref. A3817 was released in 1971 and it combined the sportier steel tonneau-shaped case of earliest El Primero ref. A385 with the striking tri-colour dial of the A386, resulting in a unique and aesthetically pleasing 70’s sports chronograph. Moreover, only 1000 examples of the A3817 were ever made, making it one of the most elusive and sought-after references among the early El Primero chronograph watches. 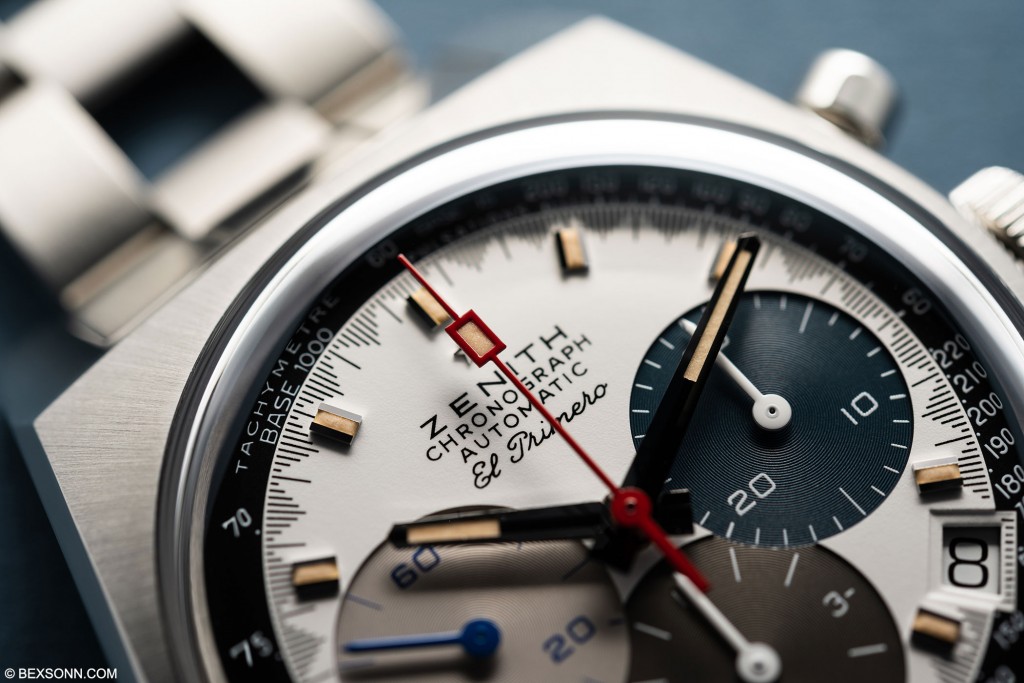 What made the original A3817 truly standout was its white dial with tri-colour registers and instantly distinctive uneven racing track, that resembled sharks’ teeth. For this Chronomaster Revival piece, Zenith sought to recreate the same effect, almost indistinguishable from the original with its red chronograph central second hand and tri-colour chronograph counters. 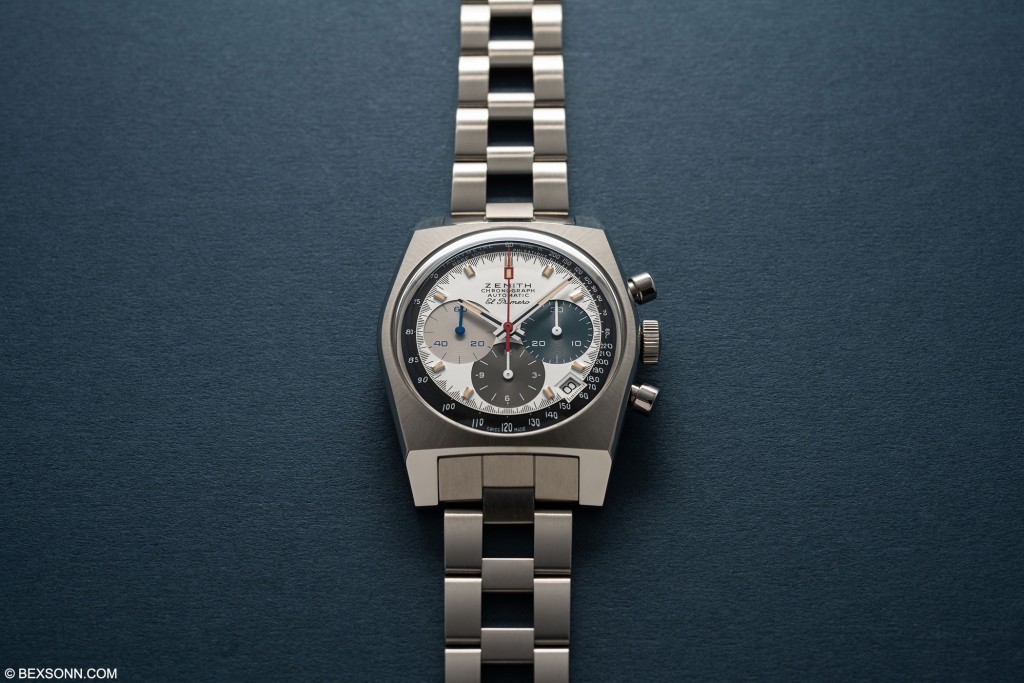 The A3817 Revival features a white dial, with overlapping tri-colour registers. At 3 is the blue minute register, at 6 is the grey hour register and 9 o’clock is the light grey running seconds register with blue hand. The base of the dial is an eye-catching grained white backdrop, with a black soundwave minute track, which is encircled by a black chapter right that displays a tach-o-meter and pulsations scale. The rhodium-plated hour markers are inlaid with faux SuperLuminova (a detail we’ll get back to). In between 4 and 5 o’clock is the date aperture, which is rather un-intrusive and doesn’t seem to unbalance the dial at all. The style of hands is in-keeping with those from the original A3817 and featuring a thin black stripe down the centre, which is briefly interrupted by SuperLuminova.

The A3817 case, which was re-released a couple of years ago now, is enjoying quite the renaissance and in 2020 we saw the addition of the iconic ladder bracelet. The 37mm tonneau shape of the A3817 is emblematic of the era in which it was born, featuring multiple facets, curves and domed crystal, creating the required vintage-retro look, which has been perfectly distilled in this latest Zenith El Primero A3817 revival. 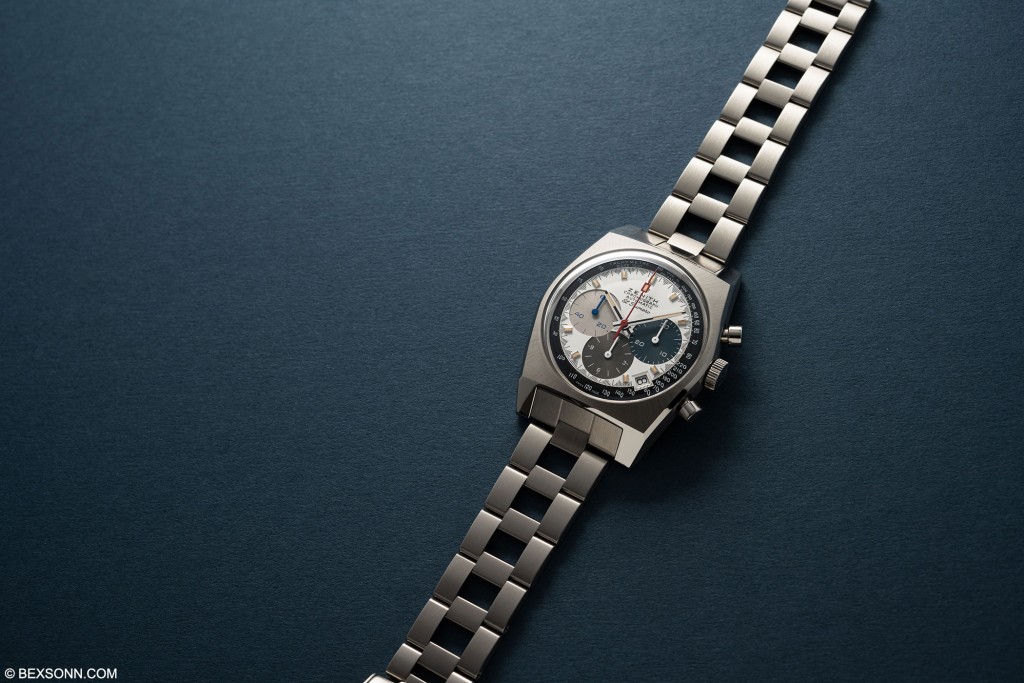 The face of the case features a sunburst satin brushed finish, with the chamfered edge and angled lugs featuring a mirror polished finish. The pronounced pushers are also polished and quite wide, which actually lends to the comfort during actuation. The large, fluted crown bears an embossed Zenith star logo. The case is waterproof up to 50 metres and turning the case over you’ll see the sapphire display case back, which offers a glimpse of the El Primero 400. 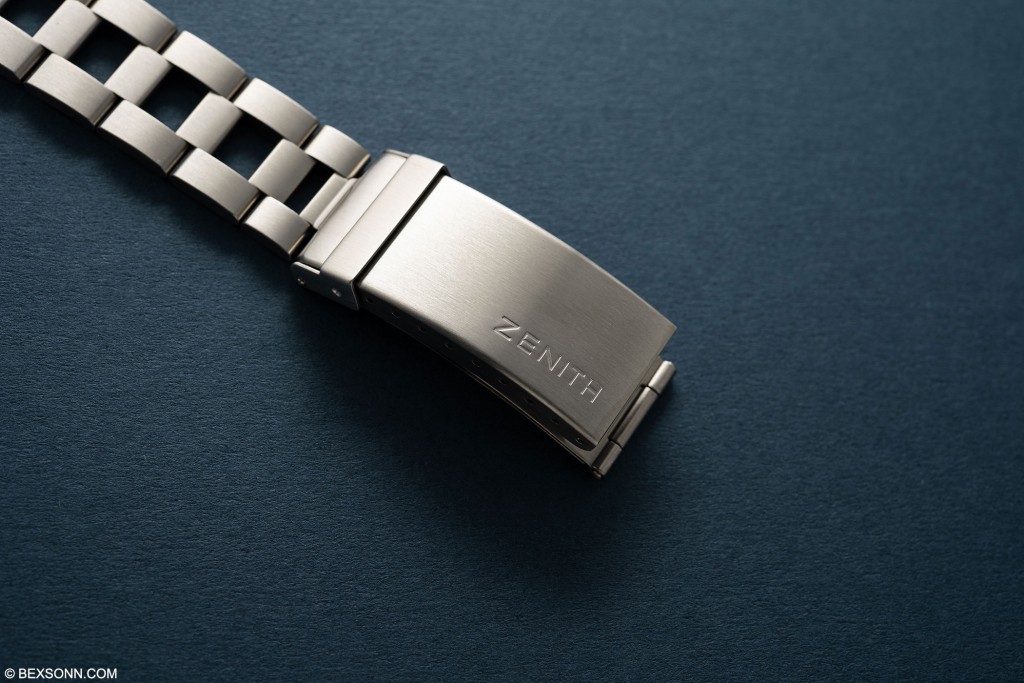 Furthermore, in-keeping with the retro theme, the Chronomaster Revival A3817 is available in two options that could have come straight from 1969: The first is the steel “ladder” bracelet, a modern remake of the Gay Frères bracelets that became emblematic of the early El Primero watches. The second option is a light brown calf leather strap that will develop a unique patina with wear and time. Luckily for use we managed to get an example on the former and this does lend to the overall vintage look and feel of the watch. The bracelet has been meticulously recreated, with the feel and heft of the bracelet mirroring the original. Even the Zenith engraving on the clasp has been placed in the exact same location. 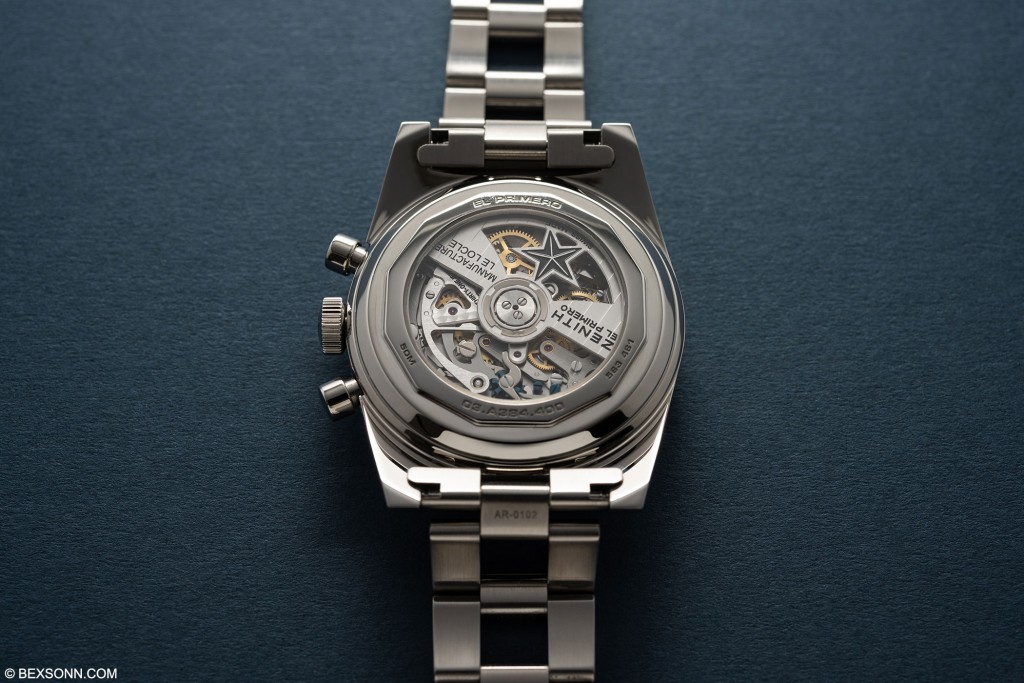 The Revival A3817houses Zenith’s El Primero chronograph calibre 400, which is capable of 36,000vph – allowing you to read the chronograph seconds to an accuracy of 1/10th of a second. As we’ve already mentioned Zenith won the race in announcing their self-winding chronograph movement first but even more interesting than that, it has seen very little in the way of modifications since then. Even when Rolex were tasked to find a self-winding chronograph movement that was slim enough to fit into the Daytona, the El Primero was the movement of choice; they even pared down its ridiculous beat rate to 28,000 vph. However, this high-beat rate has its advantages. Beating at 36,000 vph, allows the chronograph to provide a more accurate reading and also provides a smoother chronograph and running seconds sweeping hand.

The El Primero calibre 400 automatic has been beautifully finished and sports a rather industrious look, even though the oscillating weight bears the undulating “Côtes de Genève”. Looking beyond the weight, you’ll be able to see the standout golden gears, blued screws and just some of 278 components that makeup the calibre 400. Much of the cases slight profile is down to the movement, which measures a mere 30mm x 6.6mm. While this may not sound that slim, bear in mind this is an automatic chronograph that utilises a column wheel mechanism. 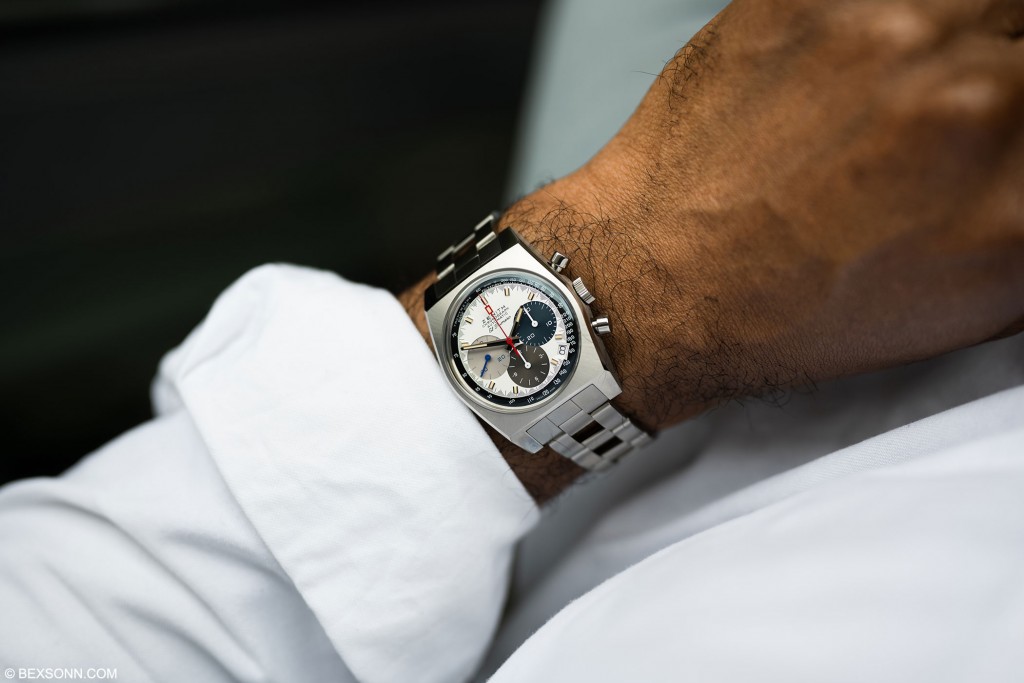 The original Zenith El Primero ref. A3817 had always seemed a little odd to me, it’s always felt as though someone just got bored and decided to throw a A386 dial into a A385 case but when you realise all the little details and the fact they only made 1000 examples – it shows just how special this piece was. This new A3817 revival is like-for-like and for the duration that I had it, it was incredibly comfortable to wear and sat snuggly on the wrist. Even with my 7” wrists, at no point did the 37mm case look or feel too small. 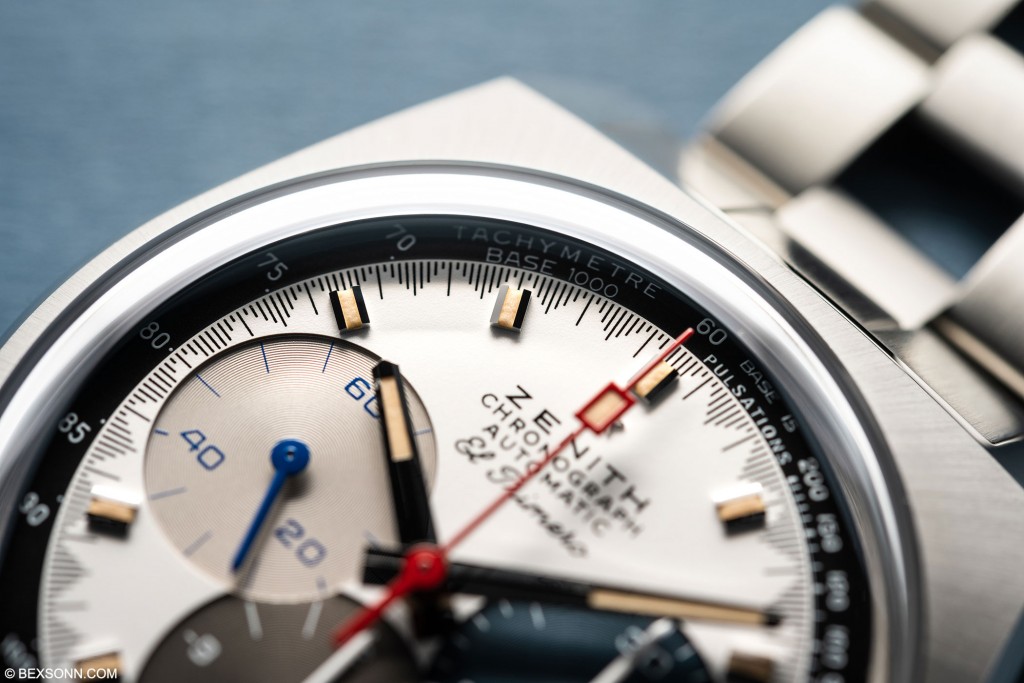 The attention to detail that has been lavished on the dial doesn’t go unnoticed and the use of faux patina luminous, which can be a bit hit or miss, works on such a piece like this – it pairs nicely with the pale nature of the dial. The size of the case is perfect in my humble opinion and recreation of this vintage tonneau case is spot on, though it is only slightly thicker than the original A3817, but it is barely noticeable. I think where the whole package is only slightly let down is in the bracelet department. 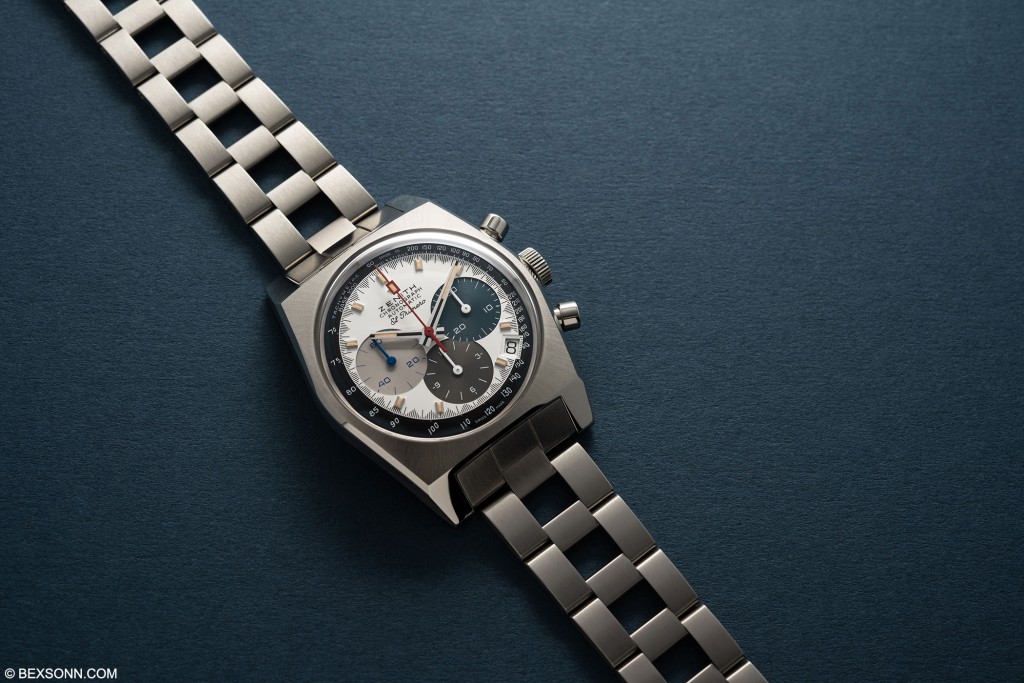 Recreating a vintage style bracelet and getting it right is an art and those of you who have worn and own any vintage watches will most likely bemoan how flimsy they can feel. Modern bracelets are perhaps liked somewhat more because of their robust construction, that said, it would appear that Zenith have chosen to straddle a fine line between vintage and modern when it comes to their new take on the iconic ladder bracelet. It feels a lot lighter than I would’ve expected but it doesn’t feel flimsy, I was anticipating a little more heft, but it has a more vintage feel, and this is kind of a cool thing.

This Zenith El Primero Chronomaster Revival A3817 is a gorgeous thing in my humble opinion – reviving one of Zenith’s most scarce models perhaps comes at the most perfect time for the watch industry and even the brand itself. The recreation of the dial is spot on, while the tonneau case evokes a 70s design that isn’t too out of touch and still feels rather contemporary. The Revival A3817 appeals to the watch enthusiast who is mindful of the original but doesn’t want to go through the rigmarole of having to search, find and then inspect to make sure everything is correct. It is no secret I love a good vintage timepiece and it is no different when it comes to the El Primero, and honestly the Chronomaster Revival A3817 has captured the essence of it original forebearer.

The Zenith El Primero Chronomaster Revival A3817, doesn’t appear to be limited like some past models and is priced at £6,700 on a strap and £7,100 on the bracelet. For more information on this new release, visit zenith-watches.com.