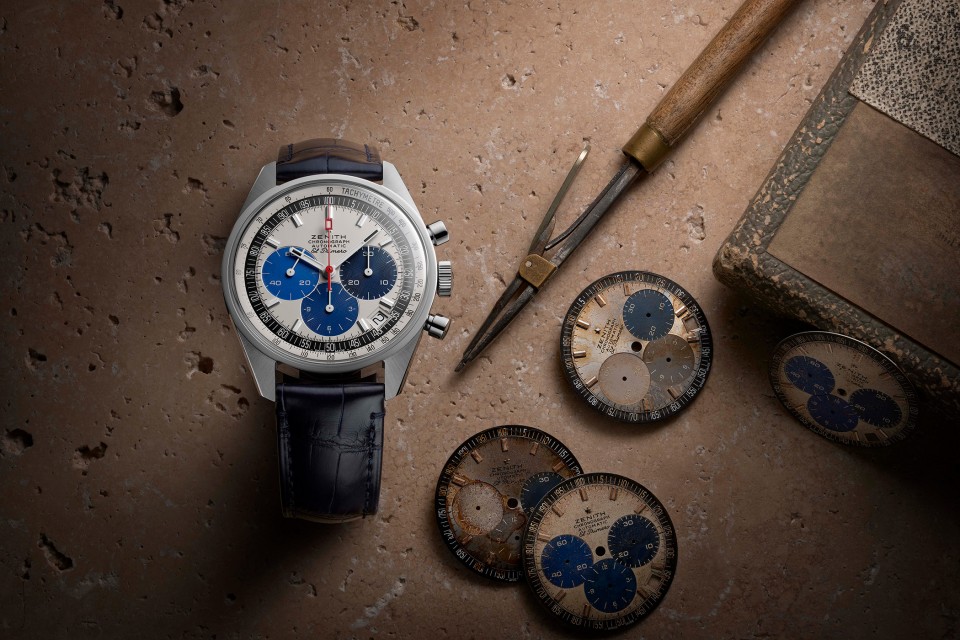 The El Primero is a legend within its own right however, there is a much debated story behind it. During the early 1960s there was a race on to see who could create the world’s first self-winding (automatic) chronograph. There were of course a few companies that shared an interest in claiming this technological breakthrough: Heuer/Buren-Hamilton/Breitling. However, there were also a couple of silent watch manufactures working on this advance too: in the Far East was Seiko, who were busy working on their own version and then there was the company from Le Locle; Zenith. While there is a debate on who was first, there’s no doubt that Zenith were first to announce the El Primero, with three different references. The A384, the A385 and of course the model that is the basis for this revival, the A386.

It is well documented that during the quartz crisis many watch manufactures closed down or there was a downturn in mechanical watch production. It is noted that senior Zenith engineer from the ébauches department, Charles Vermot had hidden away countless artefacts and pristine preserved tools in the 1970s during the quartz crisis in a rather unassuming attic.

The Zenith Manufacture is a special place, with many secrets still being uncovered till this day and back in 2019 a small, modest and unlabelled box was uncovered. In it, were a number of dials that had been extremely well-preserved: The signature El Primero tricolour dial of the A386 that became a design icon but more remarkably was another version of the tricolour dials, using three different shades of blue.

No records exist of these blue tricolour dials but considering that they were kept with dials of the A386 in the same configuration it was commercialised in 1969, one can only assume that it was part of a set of the original prototype dials for the A386, that Charles Vermot himself hid in the attic along with all the other El Primero tools. Though Zenith are unsure if the dial with three shades of blue was intended as an alternative to the A386’s dial or intended for a different model, one thing is for definitely for sure – the intrigue and stark contrast in blue tones have compelled the watchmakers at Zenith to finally put it into production.

To bring this prototype to life, it was appropriate that Zenith preserved the case the dial was intended for and made this timepiece a revival model. The 38mm stainless steel case with pump-style pushers is an exact reproduction of the A386 from 1969, using the blueprints of the original to preserve the proportions of the iconic chronograph. But what makes this edition significant and even more unique is that the Chronomaster Revival Manufacture Edition is in fact the final version of the A386 available with the original “Revival” case.

The A386 Chronomaster Revival Manufacture Edition houses Zenith’s El Primero chronograph calibre 400, which is capable of 36,000vph – thus having 300 of these ultra-thin markers on the dial, allows you to read the chronograph seconds to an accuracy of 1/10th of a second.

I have always been an admirer of the Zenith El Primero reference A386 and to know that it played such an important part in chronograph history is the icing on the cake. While 2019 saw the manufacture introduce a host of revival models based on the original A386, this latest and last revival edition perhaps sums up just how important Zenith were before, during and after the quartz crisis. The colours used from the prototype dial, which have been replicated for the new revival edition perhaps pays more tribute to one Charles Vermot and his foresight to preserve some of the soul of Zenith than anything else and adds a chapter to the El Primero otherwise previously unknown.

The Zenith El Primero Chronomaster Revival Manufacture Edition, is intended to be an exclusive piece, available uniquely to visitors of the Zenith Manufacture. Nonetheless, given the current situation, which does not allow to offer tours of the manufacture, Zenith is making the Manufacture Edition available on e-commerce, giving customers the opportunity to purchase the watch until the Manufacture reopens to the public for visits. The e-commerce site will be rolled out gradually across different markets, starting with Italy, France and Switzerland in May, followed by Germany, Spain, the United Kingdom and then in United States. The watch comes in a special packaging, mimicking a book that can be displayed on a bookshelf and bearing a blueprint of the Zenith manufacture on its cover. It will also include a comic book about Charles Vermot by renowned Swiss cartoonist Cosey, as well as a reproduction of the vintage dial found in the attic. The Zenith El Primero Chronomaster Revival Manufacture Edition will retail for £7,300 – for more information visit zenith-watches.com