Highlights From Watches of Knightsbridge May Auction 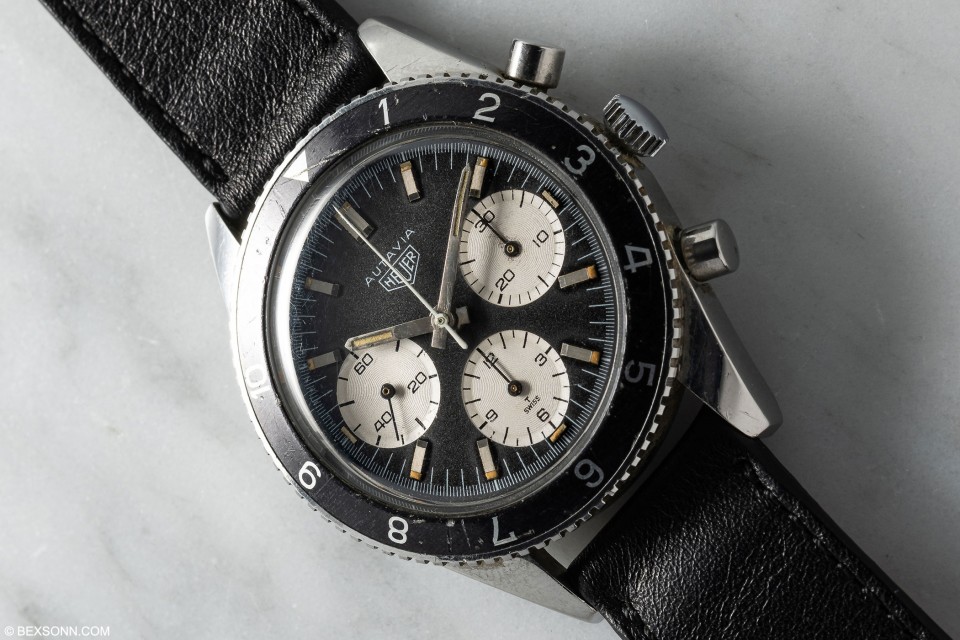 Spring is in the air and of course that means a couple of things for us here at BEXSONN and the wider watch community – new watches. That said, it has been a bit of a tumultuous start to 2021, which has seen many events and gatherings cancelled due to ongoing worldwide pandemic but as the saying goes, “the show must go on.” It is Watches of Knightsbridge’s first London auction of the year, so we recently spent some time over at their South Kensington offices to have a look at a handful of timepieces in the upcoming May auction on the 22nd. As per usual we decided to pick out some of our highlighted lots and share our thoughts on them. 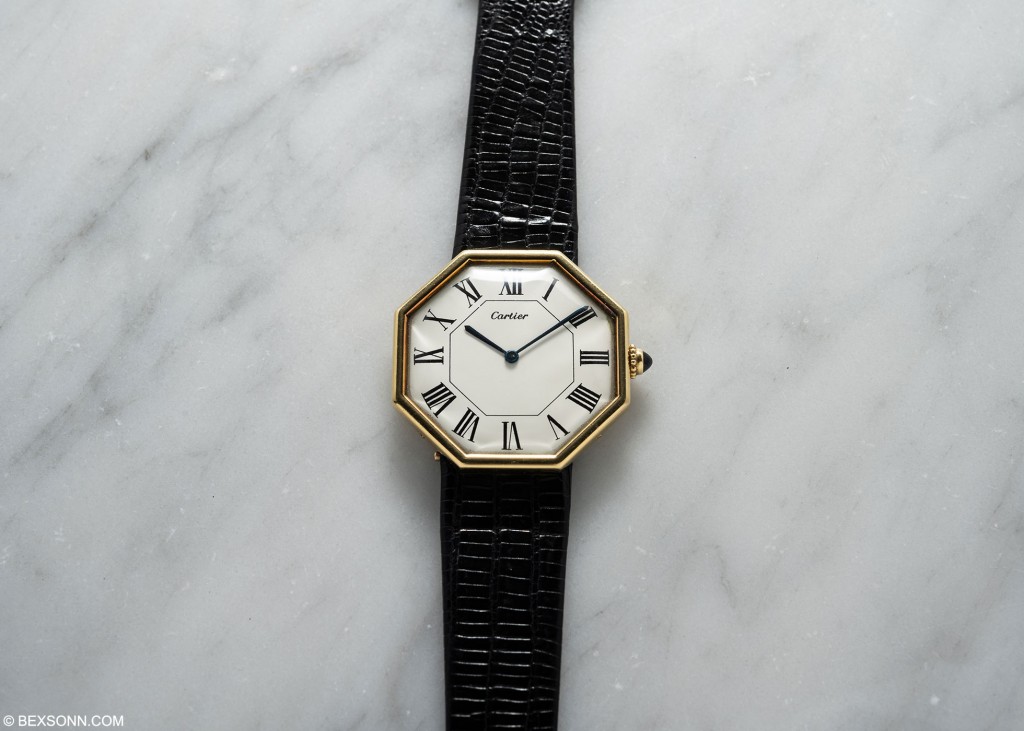 Lot 8: It is impossible to think about the wristwatch and not mention Cartier, after all, it was Louis Cartier who revolutionised the watch industry and commercialised the wristwatch. However, Louis had two other siblings: Jacques and Pierre. The three brothers pretty much spread themselves across the western world – Pierre headed to New York, while Jacques headed to London, and it was in London where some of the most outrageous designs where conceived. That said, it wasn’t until 1966 under the guideship of Jacques’ son, Jean-Jacques that the Cartier London branch really established its own uniquely designed watches. Many Cartier aficionados believe London to be the spiritual home of Cartier’s bolder designs, which blend traditional craft with innovation. 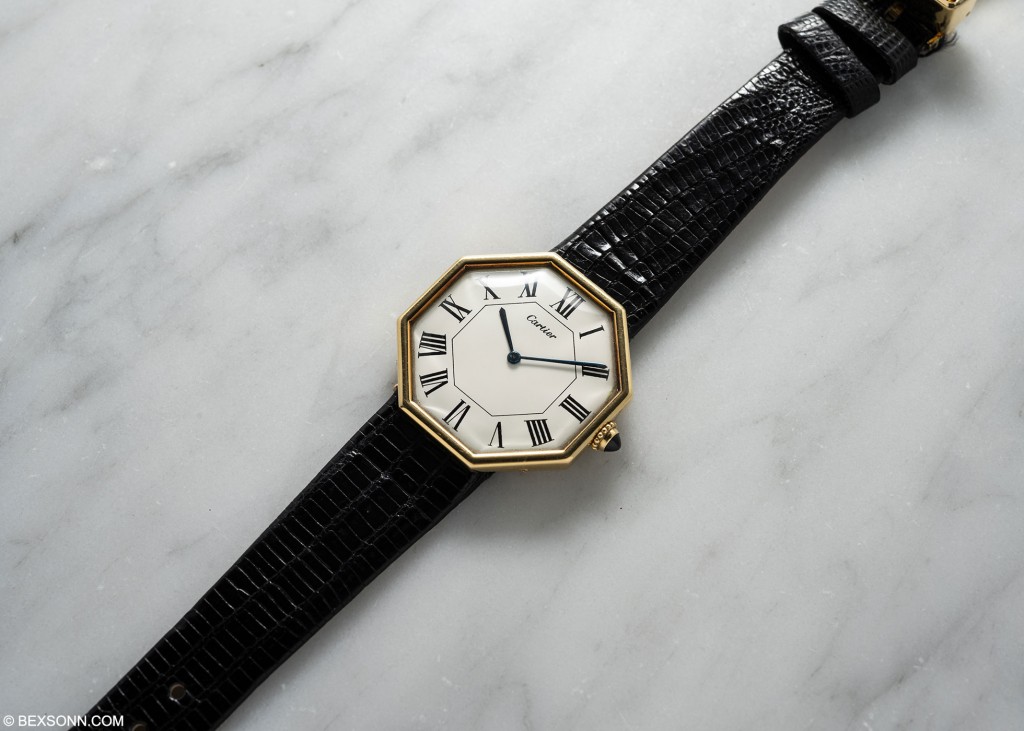 Created by the Cartier London artisan are iconic timepiece such as the Crash, the Pebble (such as this example that sold at Phillips Geneva Watch auction recently), the Oval and this example: the Octagonal. The Cartier Octagonal differs greatly from the Crash or Pebble, which features curved cases; the Crash being a somewhat more elaborate. This 1976 large Octagonal Cartier, like its names suggests features an 18-carat yellow-gold case with 8 equal sides with Cartier’s signature gold crown with a sapphire at 3 o’clock. Like most London models, the signature Cartier dials were reworked and in wanting to create a simpler layout, the chemin de fer (railway) chapter rings were abandoned. However, like the Baignoire, Pebble, Oval, Oval Maxi and Crash, the use of Roman numerals were retained. Again, like many special Cartier pieces such as this, it is important to mention that these models were produced in very small quantities. 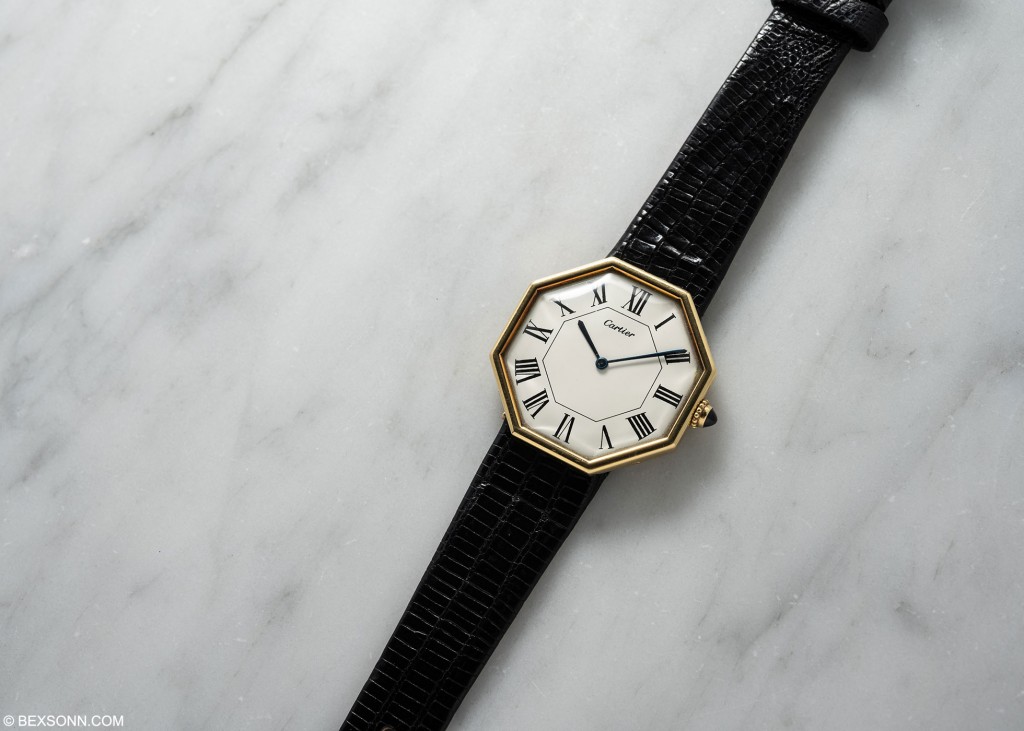 It’s important to note the originality of the timepiece; the number 1825 is stamped both on the case and on the original clasp, showing that the watch remained with its original buckle throughout its whole life. Furthermore, there are London hallmarks for 1976 on the clasp, as well as the “JC” stamp for Jacques Cartier. And like many of the Cartier London pieces created during this period, at the heart of this Octagonal is the manual-wind Jaeger-LeCoultre calibre P838. 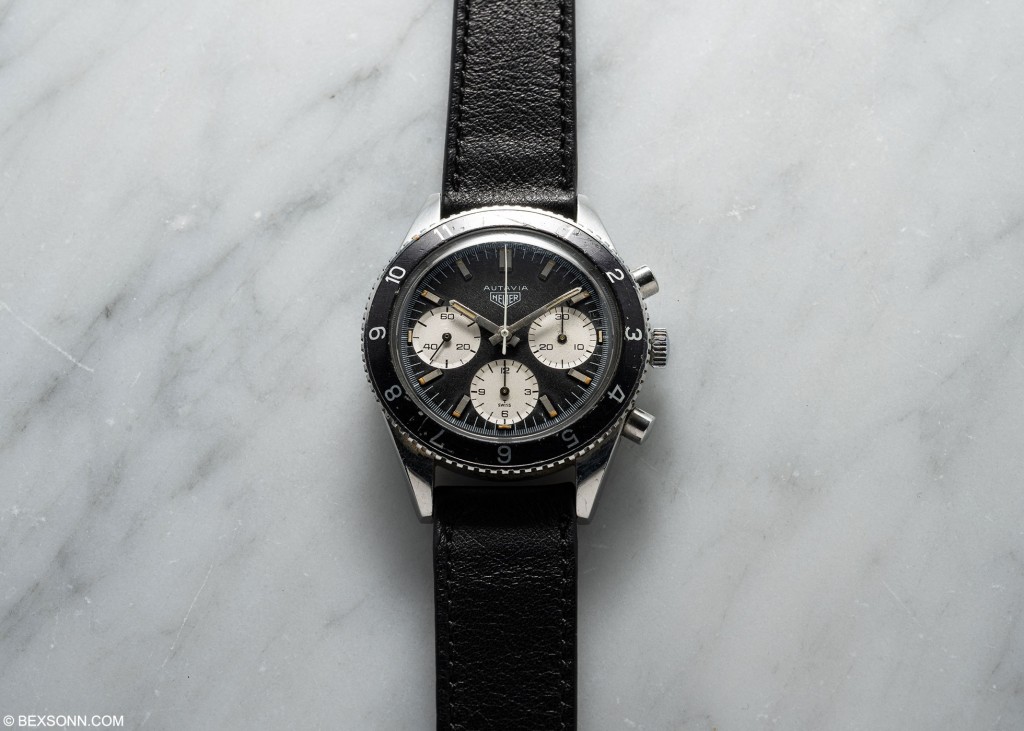 Lot 49: The Heuer Autavia 2446 third execution is famously known as the ‘Rindt’ as it was worn by the 1970 Formula One world champion Jochen Rindt. It is the last of the screw back Autavias Heuer made before transitioning into the later compression cases. What I do wonder sometimes, is how nicknames placed by collectors on timepieces play a role on its value, with pieces such as a Paul Newman Daytona, the Andretti or in this case a 2446 Rindt immediately adding to its cool factor. However, this one is a little bit different and in fact slightly pre-dates the example worn by Rindt.

The easiest way to distinguish a 2446 third execution most of the time, is by the long lume strips at 3,6 and 9 o’clock. At first glance, you could be forgiven for thinking this is a Rindt. But on a closer inspection, the case appears to be sharper, and this is because the lugs bear no bevels. This reference bearing this trait are known as transitional cases and it is believed that there were no more than 500 examples made using this straight lug case. The dial on this 2446H has aged very nicely, with most of the lume still present. It is fitted with a 1-12 bezel and comes on a rather fitting black leather strap. 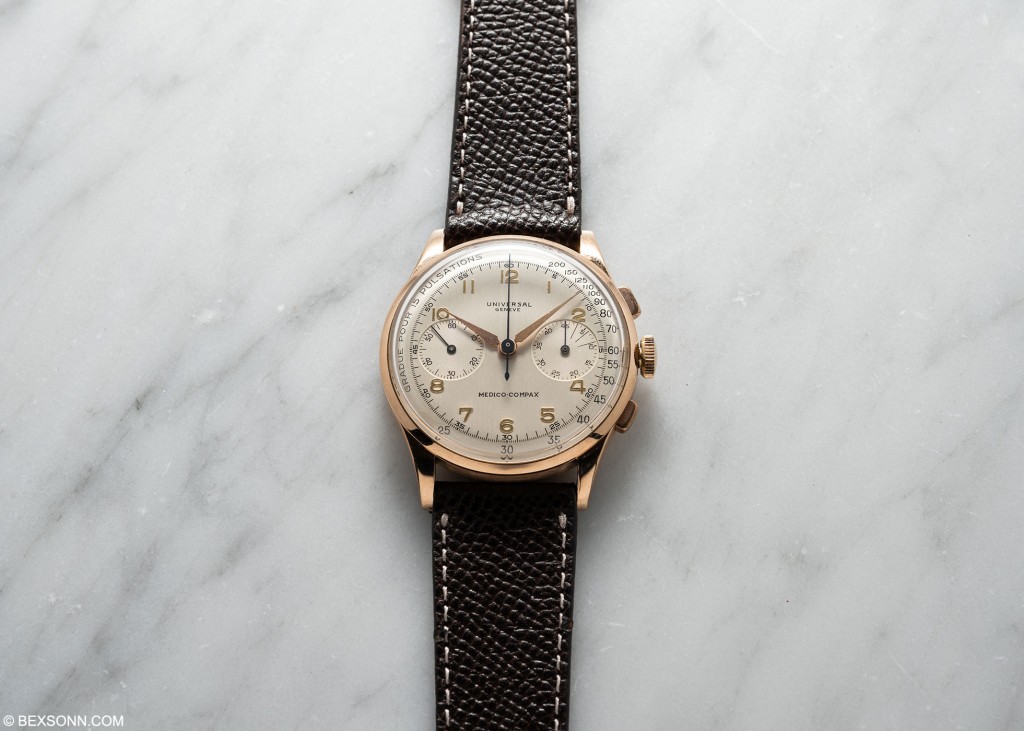 Lot 185: We’ve always loved watches built for a particular purpose and this beautiful 1950 gentleman’s solid 18-carat rose-gold Universal Geneve Medico Compax ref. 124103 just so happens to fit the bill. Universal Geneve came to prominence in the 1930s with the dual push-piece chronograph and chronograph wristwatches with a 12-hour register, which brought about quite a significant change in chronographic functions. This innovation was followed by the “Compur” range and, in 1936, the “Compax”. In the space of only a few years, Universal developed a succession of prestigious models. Today vintage UG is very much sought-after and this particular piece just happens to be in excellent and well-preserved condition.

The Medico-Compax is one of the rarer variants of the Universal chronograph range and this design is one of my favourites. Designed for doctors to measure a patient’s heart rate, this particular dial design features a huge outer ring for the pulsations relative to the dial. If you think about it, this makes sense as legibility is improved dramatically for the doctor, not to mention a pretty unique aesthetic appeal. This Medico Compax features a silver dial, with Arabic numerals and three sub-dials; recording hours, minutes and continuous seconds. Inside this timepiece is a manual wind Universal Watch Co. signed 285 calibre movement. The solid gold case measures a modest 37.5mm in diameter, with oblong pushers and snap on case back. 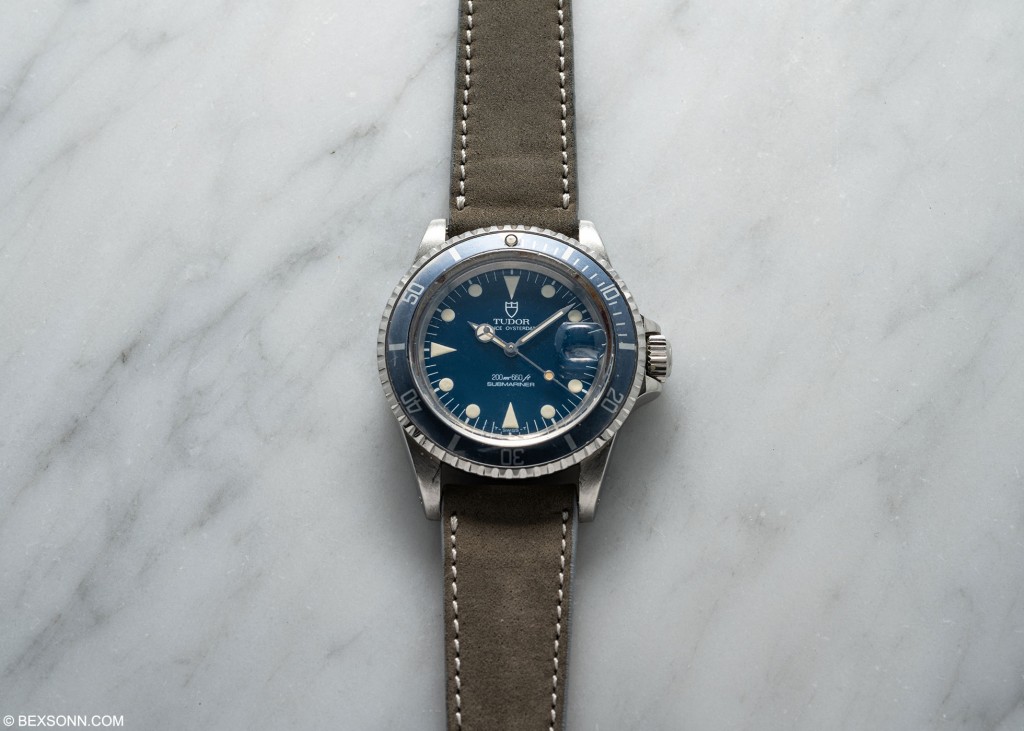 Lot 193: Over the past 5 years or so, Tudor have been on a bit of a role. Creating some of the most eye-catching reinterpretations of a handful of their iconic timepieces. Of course, this only leads to more interest in their past models and sparking a somewhat of a price increase in older models. As you likely known, the Tudor Submariner perhaps possesses one of the most iconic designs around during the 70s. Collectors use the name “Snowflake” to refer to the Tudor Submariners with reference 7016/0, 7021/0, 9104/0 and 9411/0 produced from 1965 to 1975. These watches featured square hour markers and a unique hand style that distinguished them back then, and still distinguish them today, from other watches. These models are well-known also because they were issued to the French Marine Nationale and as with MilSubs have become grails in the collector world. Although a diver’s watch at its core, the Tudor Submariner “Snowflake” like the Rolex Submariner also became a fashionable everyday wear but of course these pieces are only rising in value and becoming harder to find in good condition.

However, fear not as Tudor continued to make blue dial Submariners after this period (the reference 79090). This reference 79090 Tudor Submariner features Mercedes style hands with round markers and examples like these are also now in high demand. This example is a superb example, in overall good condition with strong case proportions. The blue dial appears clean with lume plots that have aged to a light creamy hue, with matching hands. The bezel also shows signs of patination adding to the vintage look and feel of this Tudor Sub.

The Watches of Knightsbridge auction will take place on the 22nd May 2021 at 14:00 BST, to review the full catalogue visit watchesofknightsbridge.com.