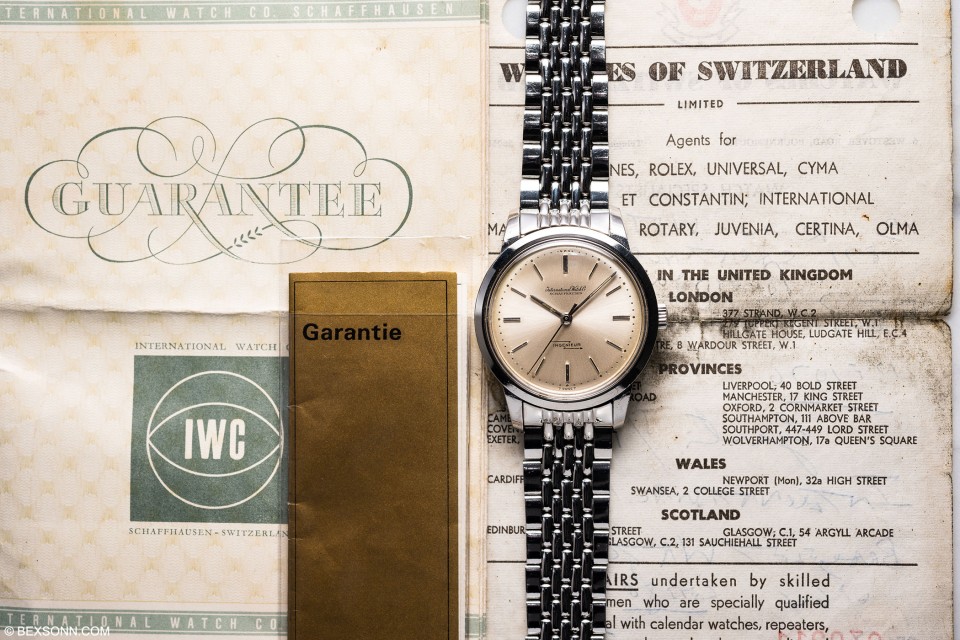 Spring is in the air and of course that means a couple of things for us here at BEXSONN and the wider watch community – new watches. That said, it has been a bit of a tumultuous start to 2020, which has seen many events and gatherings cancelled due to COVID-19 but as the saying goes, “the show must go on.” It is Watches of Knightsbridge’s first London auction of the year, so we recently spent some time over at their new offices in Knightsbridge to have a look at a handful of timepieces in the upcoming March auction on the 28th. As per usual we decided to pick out some of our highlighted lots and share our thoughts on them.

Lot 83: While it’s not entirely clear who invented the first antimagnetic wristwatch, we do know that the IWC Mark XI was most certainly one of the earliest, which was introduced in 1948. IWC took this this development a step further when they introduced the Ingenieur (German for engineer). The model was developed by Albert Pellaton, IWC’s technical director responsible for the creation of the firm’s first automatic movement calibres 81 and 85. The Ingenieur was considered to be one of the earliest tool-watches and with its distinctive, yet timeless design – the early Ingenieur model enjoys cult status amongst aficinados. The distinctive Ingenieur logo, which has an arrow passing through the name is said to be reminiscent of the Swiss thunderbolt icon which warns of the presence of an electrical current. The thunderbolt symbol was chosen to mark the model’s anti-magnetic properties; the soft iron shield protecting the movement against magnetic fields.

The Ingenieur was an iconic watch for IWC and this circa 1969 example, features a distinctive silver sunray dial, applied hour markers and minute track. The watch comes with the original box, guarantee, purchase receipts, booklets and two spare links. The watch furthermore retains its IWC rice grains bracelet manufactured by Gay Frères, the master bracelet maker of the 20th century.

Lot 103: We’ve highlighted CK2998’s before and spoke about just how cool they are. Back in 2015 Christies had a special sale of Speedmasters, where they highlighted many rare lots. In my opinion, CK2998’s are just as rare as Rolex Daytona’s from the same decade, in fact I’d said they’re actually rarer. The CK2998 is one of my personal favourites from the pre-moon era of Speedmaster’s and is in fact the first Speedmaster to be worn in space by Walter “Wally” Schirra during the Mercury program’s sigma 7 mission.

However, with all due respect, we haven’t just highlighted any old CK2998. Speedmasters were of course issued to NASA’s astronauts but this particular example was purchased from the British Military suppliers NAAFI Geilenkirchen (an establishment created by the British Government back in 1921 to sell goods to servicemen and their families), that said, this 1963 example appears to have been rather well-preserved. The dial is in good conditioned and the lume exhibits a rather creamy patina. The case appears to be in quite good condition to and comes fixed with a period correct bracelet and end pieces.

Lot 158: The Tudor Submariner perhaps possesses one of the most iconic designs around during the 70s. Collectors use the name “Snowflake” to refer to the Tudor Submariners with reference 7016/0, 7021/0, 9104/0 and 9411/0 produced from 1965 to 1975 and some newer reissue models. These watches featured square hour markers and a unique hand style that distinguished them back then, and still distinguish them today, from other watches. These models are well-known also because they were issued to the French Marine Nationale and as with MilSubs have become grails in the collector world. Although a diver’s watch at its core, the Tudor Submariner “Snowflake” like the Rolex Submariner also became a fashionable everyday wear.

This reference 9411/0 Tudor Snowflake Submariner is a superb example, in overall good condition with strong case proportions. The matte black dial appears clean with square lume plots, which have aged to a deep creamy colour, though the hands are a tad lighter that could indicate they’ve been replaced at some point – though that may not explicitly be the case. Overall, it is in awesome condition.

Lot 216: The El Primero is a legend within its own right but there is a much-debated story behind it. During the early 1960s there was a race on to see who could create the world’s first self-winding (automatic) chronograph. There were of course a few companies that shared an interest in claiming this technological breakthrough: Heuer/Buren-Hamilton/Breitling. However, there were a couple of silent watch manufactures working on this advance too: in the Far East was Seiko, who were busy working on their own version and then there was a company from Le Locle – Zenith!

But, and it is a big but, who was first? Was it Heuer/Hamilton-Buren/Breitling or Seiko who actually beat Zenith to the market? This has long been analysed in detail and you can read that in-depth story on Project 99 written by none other than Jeff Stein. But when it all comes down to it, the fact of the matter is this. While Heuer were better prepared for production and Seiko silently released theirs in 1969 (but was only made available to the Japanese market) – it was Zenith who actually announced their automatic chronograph movement first. It was that 7-year journey that started in 1962 that produced, arguably, one of the best automatic chronographs ever made. Though you can’t take anything away from Heuer and Seiko, Zenith produced the more superior automatic chronograph movement in the El Primero.

I’ve always been a fan of the El Primero and this current lot presents an opportunity to own a slice of watchmaking history. Made in circa 1971, this ref. A386 El Primero features the iconic tri-colour, large overlapping chronograph registers, with date aperture at 16:30, baton hands and red sweeping-seconds chronograph hand. The dial on this example displays some signs of aging, however, this adds to the natural patination of the watch in my humble opinion. It also comes on the much sought-after original Gay Frères “Ladder” bracelet with correct endlinks.

The Watches of Knightsbridge auction will take place on the 28th March 2020, make sure you visit watchesofknightsbridge.com for this month’s full catalogue.