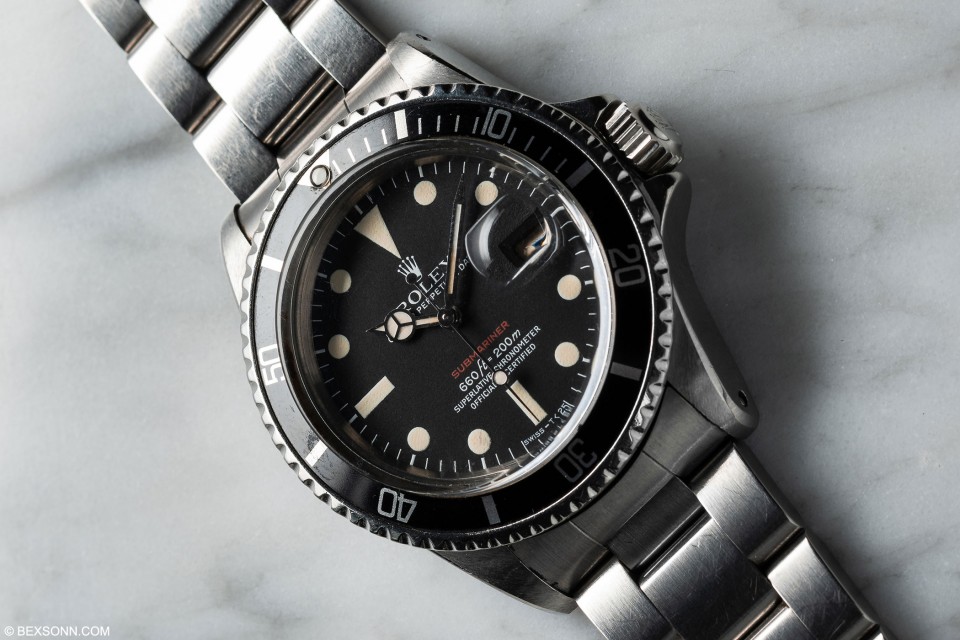 We are now just a little over half way through the year, which could only mean one thing: the summer Watches of Knightsbridge auction is upon us and they admittedly have some gems in the auction line-up. A couple of weeks ago we spent some time over at their South Kensington offices in the Michelin building, to get hands-on with some of the timepieces in the upcoming July auction. As per usual we decided to pick out some of our highlighted lots and share our thoughts on them.

Lot 32: Over the past few years Longines have re-introduced some past models, the Legend Diver, the Single Push Piece Chronograph, Heritage Diver 1967 just to name a few. Nevertheless, one that hasn’t been re-issued is this rare Nautilus Skin Diver. What you are looking at here is one of the earlier examples of a Longines diving wristwatch. First introduced in 1957, the Nautilus Skin Diver is probably lesser known than its predecessor the Automatic Diver. This very early example sports a 3-6-9 dial as opposed to the more common 3-6-9-12 dials. One of the weakest points of this Nautilus Skin Diver is or was in this case the fragile Bakelite rotating bezel. While it’s not easy find a replacement – I must admit, I kind like it without the bezel. Maybe it’s just me but I think it adds a certain element of ruggedness.

This Longines Nautilus Skin Diver sports a black dial that has a sandy/tropical patina, with luminous markers, along with numerals at 3, 6 and 9 o’clock. As mentioned above the 60-minute rotating bezel is missing but nonetheless it still has a good well-preserved case. Inside is the Longines caliber 19AS, which is protected by a thin layer of lead and is cased in a 40mm stainless steel housing that will be fixed to the wrist via a well-weathered black tropic strap.

Lot 39: The Autavia is arguably Heuer’s most appealing, attractive and elegant chronograph of their famous three. There is a likeable quality to it that perhaps is lacking in the others, maybe this is the reason why their popularity and of course value have skyrocketed over the past few years. That said, what makes this example more appealing than all others that we’ve seen to date is the inclusion of a tachymetre scale on the outer edge of the minute track.

The dial features applied steel markers, which includes the Arabic numerals at 12 and 6 o’clock. Moreover, this 3rd execution dial includes lume plots that appear to form a triangle, with this combination giving the dial a unique look. Only a small handful of these dials are known to exist and it is suspected that these dials were special order only, thus proving to be extremely rare amongst collectors and as such, only four are known in existence.

Another noticeable trait that this 3646 sports is a bezel that has 13-24 demarcated on it, for easy use of reading international time in the afternoon. Again, only very few of these bezels are known to exist in the vintage Heuer market.

Lot 65: We just love Speedmaster’s and admittedly featured quite a few here in the past. That said, we’ve also looked at Speedmasters from Watches of Knightsbridge auctions before but this one is just a little bit special. I’ve seen my fair share of discoloured brown dial Speedmasters and even ones with a blue or grey sunburst dials. Seeing a light-matte grey dial is a first for me and it would appear these pieces are not only rare but possibly unique.

According to Watches of Knightsbridge the very unusual matte grey dial with black indices in this Speedmaster ref. 105.002 comes from a batch of prototype dials (batch 20816 to be specific) made by Singer, who were the official Omega dial makers at the time. These dials were most likely rejected dials by Omega as they were never carried over into general production. This particular example is very different to the typical Speedmaster dial and is what makes it so interesting and unique. These dials were discovered many years ago by the vendor solely as dials with their batch reference sticker applied on the back and no dial feet. They are presented today fitted to the correct watches from the period.

This 1963 Speedmaster ref 105.002-62 features as mentioned a matte grey dial with black markers, which don’t appear to feature any luminous material. An applied Omega logo, triple sub dial registers recording hour, minutes and continuous seconds, with central chronograph seconds and a step dial. Inside is the infamous calibre 321 and it comes on an expandable Omega 7912 flat link bracelet, with 516 end links, which is numbered and dated 4/62 (fourth quarter of 1962). It also features a period correct “DON” (dot over ninety) bezel, which also bears signs of ageing. But I guess the real question is does this dial add to the overall value of the watch? In my humble opinion, I think it does just as it would if it was fitted into a Rolex or a Tudor. That said, this reference of Speedmaster is rare in it’s own right.

Lot 88: The Rolex Red Submariner was produced from roughly 1969 to 1973. It is entirely possible that many of you reading this may well have seen a Submariner Date but this one has a small difference, making it highly covetable: it’s the first Submariner with a date. Today it may not seem like such a big thing, considering that a large percentage of Submariner’s you see on wrists feature a date aperture. The Rolex Cyclops actually started out years back in 1953 on the Datejust (some say it was the Turn-O-Graph), however, what you need to remember is that it didn’t begin life on the Submariner Date. Perhaps the main reason for highlighting such a piece like this, is that due to the current pandemic, prices on these have softened somewhat.

Inside this reference 1680 Rolex Red Submariner beats the 26-jewel calibre 1570 movement. The reference 1680’s 40mm stainless steel case offers wearers 200 meters of water resistance, which is more than adequate for the majority of real-world applications – however, these Submariners were considered a watch for the desk-divers. Due to their limited production numbers, Rolex Red Submariners are considered quite rare, and generally sell for significantly more than their equivalents with white text. Additionally, their rarity has only increased over the years, as it was a standard practice for Rolex to replace damaged Red Submariner dials with white-text, service dials when watches were sent in for servicing. Moreover, this example is in excellent condition as well.

Lot 106: The Rolex Explorer 1016 has always been the Rolex sports watch that has somehow sailed under the radar, in comparison to the brands big hitters; such as the Submariner, GMT and Daytona. The no nonsense of the 3-6-9 dial perhaps lends to its more simplistic nature and by virtue probably makes it more underrated and underappreciated. That said, it is likely the reason why it remained hardly unchanged for nearly 30 years. As you’ll likely know from my in-depth article on the 1016, I am a massive fan of the Explorer and while this ref. 1016 is nothing extra special it has been well-preserved.

This circa 1984 Rolex Explorer ref. 1016 has a matte black dial with applied luminous markers, 3-6-9 Arabic numerals and Mercedes hands. The lume on the dial has patinated to a subtle warm cream hue. Inside this Explorer ref 1016 is the 26-jewelled automatic calibre 1570 movement, signed Montres Rolex S.A. The case excellently preserved and comes on its original bracelet, which can be quite hard to come by these days.

The Watches of Knightsbridge auction will take place on the 18th July 2020, be sure you visit watchesofknightsbridge.com for this month’s full catalogue.