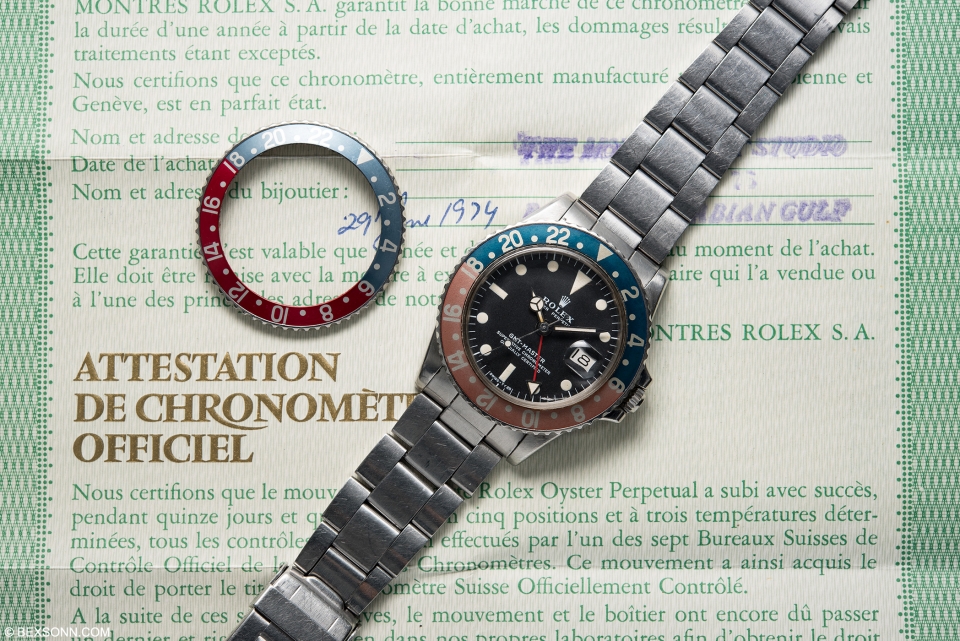 Last weekend, Watches of Knightsbridge’s first auction of this year took place and we thought it would be good to see how some of the lots we highlighted performed, before BEXSONN becomes awash with novelties from this year’s Baselworld. While Watches of Knightsbridge don’t exhibit the high-end pieces from the more established auction houses, they always have some really intriguing pieces that are perhaps more attainable. It was also good to see some of the more underrated lots perform really well on the day and exceed their higher estimates. 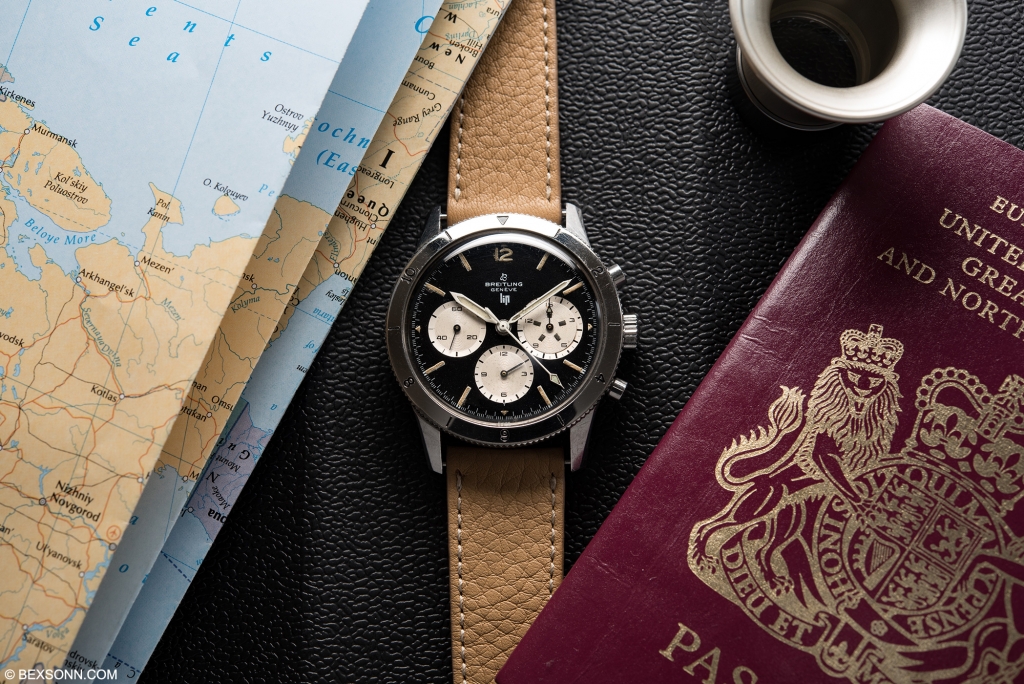 Lot 37, which we highlighted in a completely separate post; a 1960s Breitling 765 AVI retailed by Lip. As mentioned, Lip was a really famous French retailer, which largely explains why Blancpain and Breitling had a partnership with them. It was the 2nd major French collaboration for Breitling after UTI. The Lip signed Breitlings are often large tool-watches like Navitimers, Cosmonautes and AVI co-Pilot but we see also Chronomat 808 and Chrono-Matics bearing the retailers name. But how much did this little detail impact on the hammer price? It would appear quite a bit, as when the gavel fell on this piece, it sold for £11,000 – £3,000 above its higher estimate. 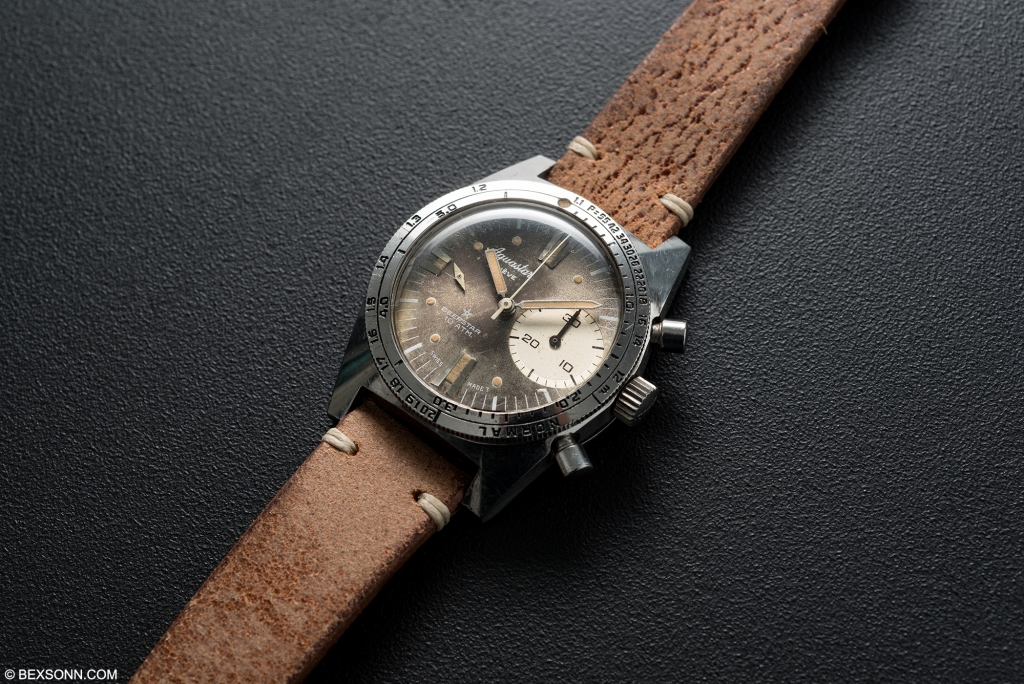 The Aquastar Deepstar Chronograph was lot 71 and was used by the one and only Jacques Cousteau and his crew on the Calypso back in the sixties. It sported an unusual but unique little propeller seconds hand and one of the biggest contrasting subsidiary dials of all vintage watches. It sported a Tropical dial and hands appear with original lume and an overwhelming grey-golden patina that brought an awesome individual look to that watch and I wasn’t the only person who thought so too. When the gavel fell on this lot, it sold for £7,200 -£1,200 more than its higher estimate. 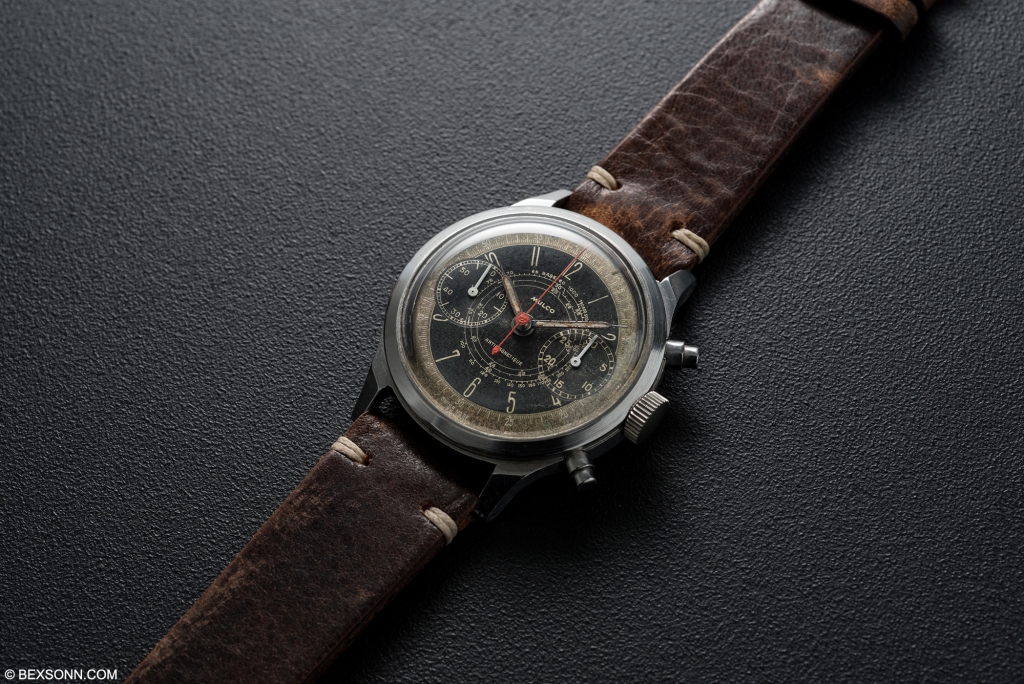 Another piece we were drawn to was lot 86. A Large 38mm stainless steel ‘Spillman’ case, Mulco Chronograph from the 1940s. All this, and more. While it was evident the two-tone dial of this Mulco chronograph had seen some rather rough days, this all added to the allure and patina of the watch itself. Overall, the condition, quality and rarity of this watch made it one of my favourite pieces in the auction – not to mention the attractive estimate and it would appear I was not alone as someone managed to win this piece at its lower estimate of just £3,500. 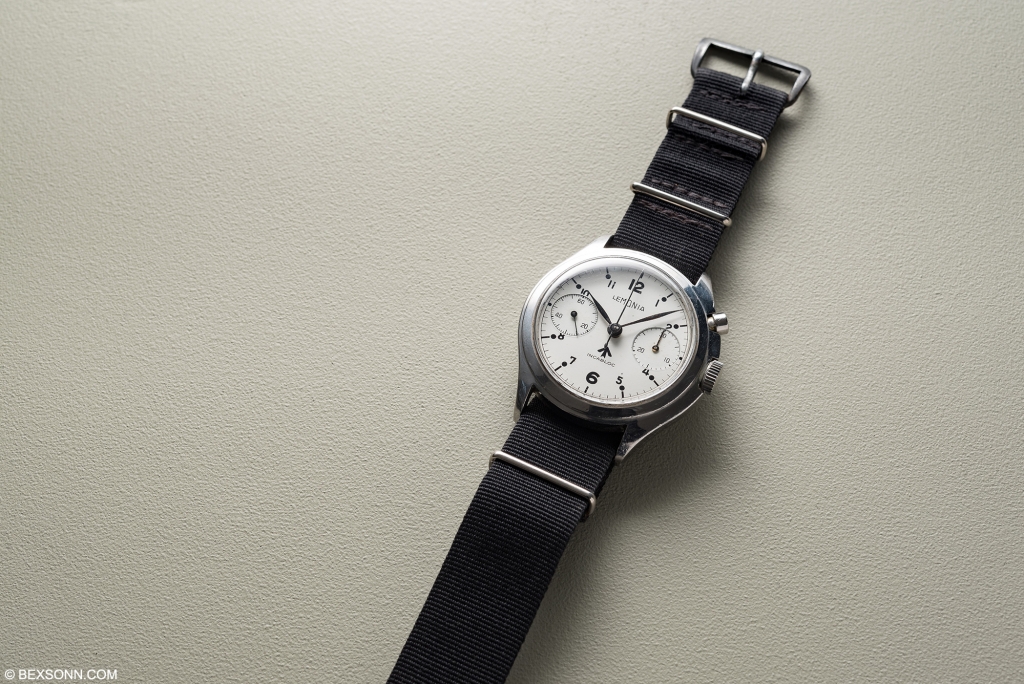 Another piece that we decided to single out, with its own dedicated article, was that of the lot 144: a Lemania Royal Navy Nuclear Submarine. As mentioned, Lemania had a long relationship with the British Military, producing watches for the Royal Navy between the 40’s to the 70’s with a large portion being mono pusher chronographs. Split between Series 1, 2 and 3, the first two series featured round cases whereas the Series 3 had a more muscular asymmetric case that Lemania has become famous for. However, this example was consigned by the son of the original owner, who was issued the watch while serving in the Royal Navy. He worked on-board the HMS Conqueror (S48) during the Falklands conflict in the 80’s, which was the only nuclear-powered submarine to have engaged an enemy ship with torpedoes. The original owner of this watch, was part of the crew responsible for the sinking of the General Belgrano, an Argentine Navy Cruiser on the 2nd of May 1982. How much weight did this provenance add? Enough because when the hammer fell, it sold for £9,200 – £1,200 above its higher estimate. 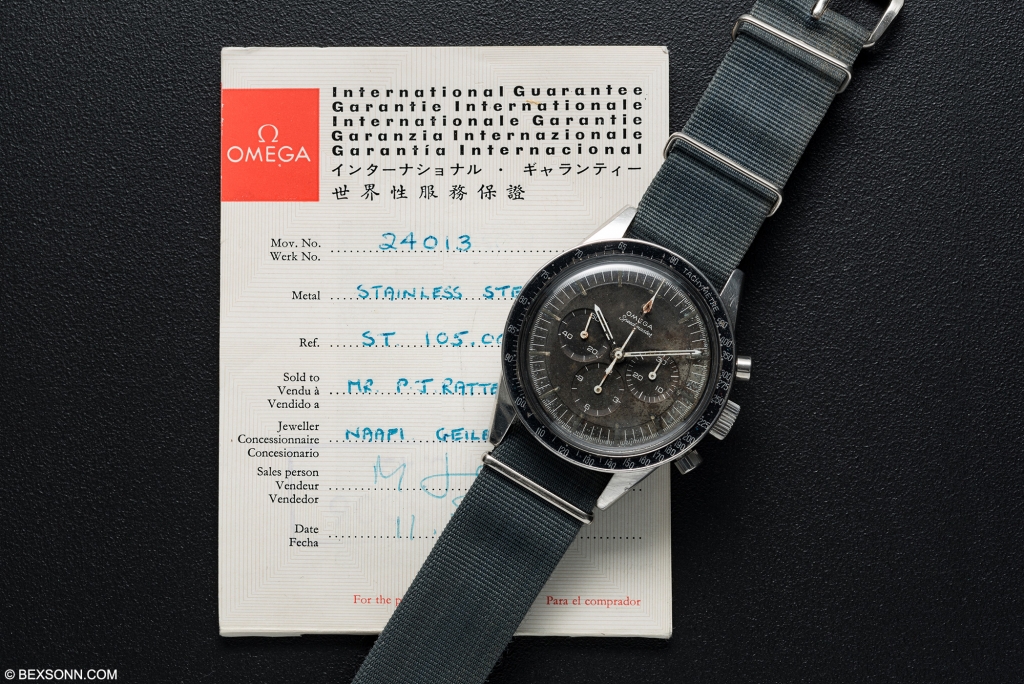 Then there’s lot 193 – an Omega ‘Ed White’ Speedmaster that was purchased from the British Military suppliers NAAFI Geilenkirchen (an establishment created by the British Government back in 1921 to sell goods to servicemen and their families) – which was perhaps the reason it looked like it had seen some rather tough days but again, this all adds to its patina and of course its story. The dial was well weathered and looked almost tropical but remained honest. The case appears to be in quite good condition despite the weathered dial and it fittingly came on a NATO strap. Hammer price? Just a tad under its higher estimate of £8,000 – selling for £7,600 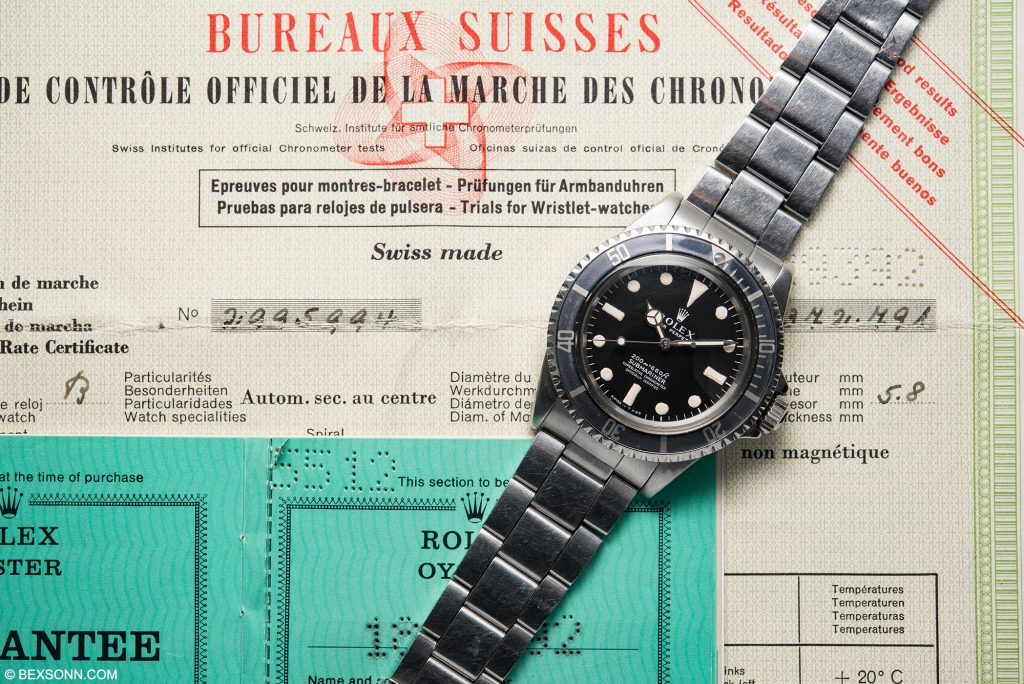 Lot 267 was of course the humble and modest 5512, albeit, with a few sought-after details that make collecting Rolex timepieces so intriguing. This 4-liner featured a metres first depth rating and also came with box, papers and chronometer test certificate. While this is more of a novelty – as these cannot be worn – it does add some weight to its overall value. But exactly how much weight did it add? Enough – selling for £15,000. Another Rolex sports watch we highlighted was lot 271: a Rolex GMT-Master, which was in great, honest, condition with natural signs of ageing which came complete with all the original box and papers, booklets, as well as additional bezel insert and was been consigned to the auction by the original owner. These little details added to its value, hammering at £15,000 – £3,000 above its higher estimate. 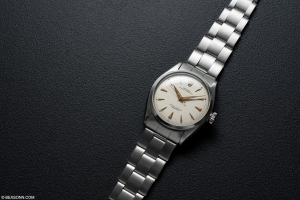 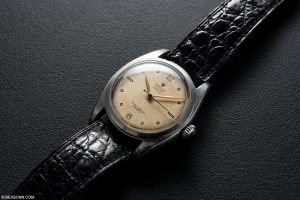 Lot 315 & 318 were two examples I highlighted simply because of their clean aesthetics and also the fact they weren’t sports models. The reference 6084 was the transitional piece from the “Bubbleback” era that preceded the Datejusts and Day-Dates that came after. This reference 6084 featured the traditional Rolex Oyster style case and though it only measured a mere 34mm in size, the cleanness of the dial made it appear a tad larger. However, the allure of this 6084 was all in its honeycomb dial, which also drew the attention of bidders too – selling for £3,000. The large Rolex Ref. 6098 ‘Ovettone’, which measured 36mm case diameter also faired rather well too. The famed Rolex “Ovettone” was the largest bubbleback-type, time-only watch produced by the brand and this one featured a matte white dial, which had patinated to a warm creamy tone, inset gilt block and baton markers with 12, 6 numerals, inset coronet, gilt feuille hands – all the ingredients for a good performance. When the gavel fell on “Ovettone’ it sold for £3,800 – above its higher estimate of £3,000. 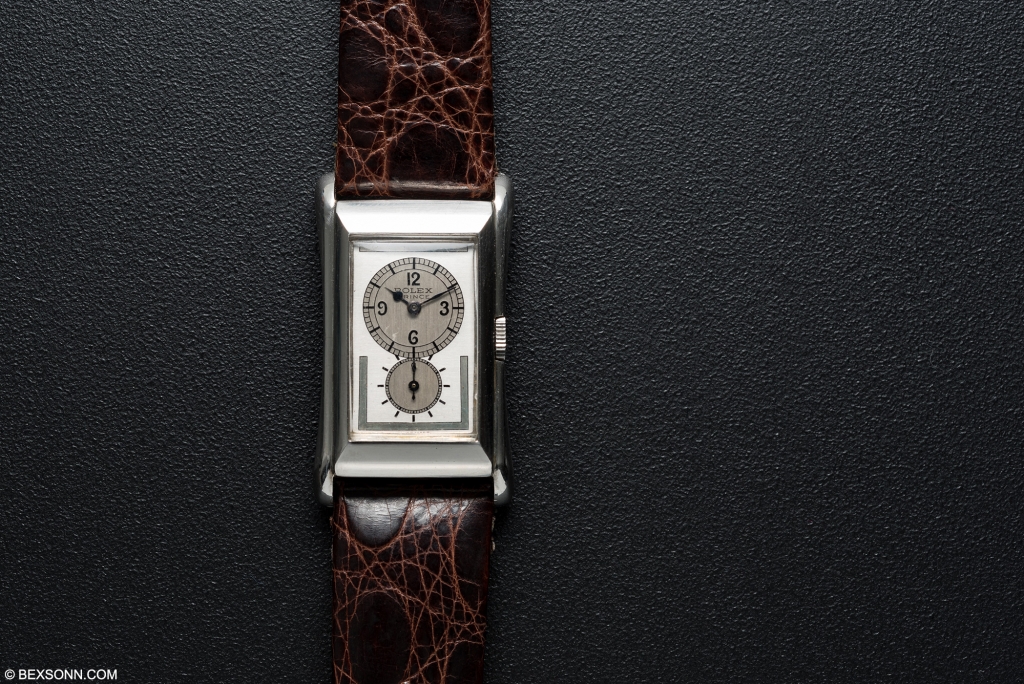 Lot 333 was this rare platinum Rolex Oyster Prince Brancard ref. 971, which featured a well-preserved silver dial that nicely contrasted with its heavy platinum case, which measures 43mm x 26mm. The upper hour and minutes dial features a sector style layout with numerals at 3, 6, 9 and 12, which just adds to the overall look. As mentioned, it is notoriously difficult to handle platinum and only the most skilled artisans could work with the metal, however it would appear this craftsmanship went unnoticed and this lot was passed. 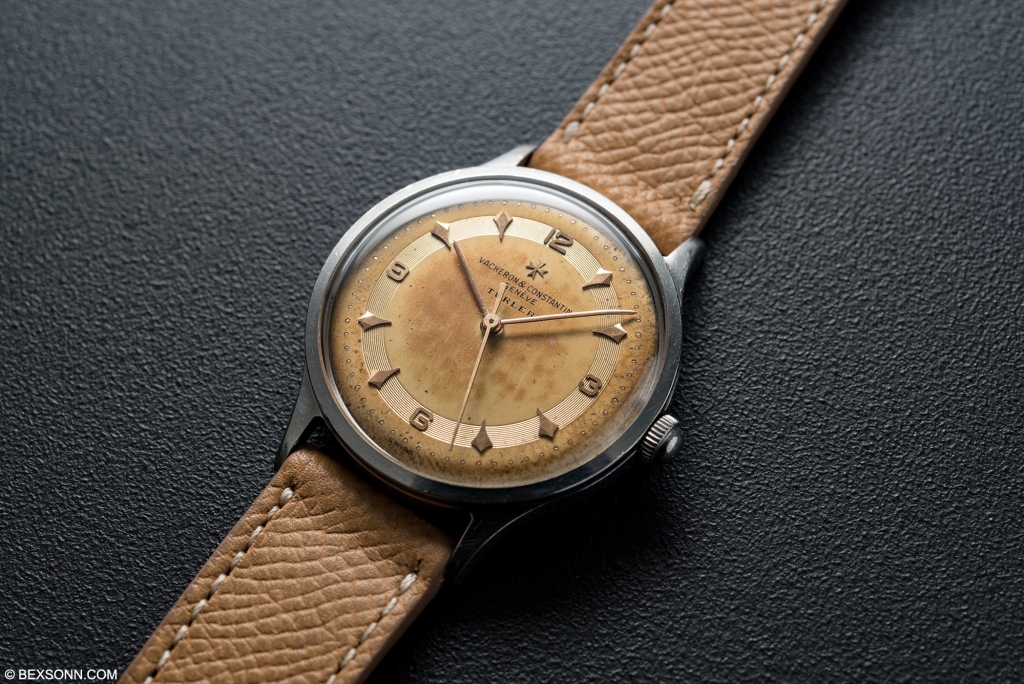 Steel watches from the likes of Vacheron Constantin are in my opinion; instantly cool and of course rare, and this is exactly what lot 334 was. Last but certainly not least is this Vacheron Constantin. Why have I highlighted this piece? This steel 40s dress watch ref. 4301 from Vacheron was no ordinary stainless-steel vintage VC dress watch, no. The 35 mm case featured a waterproof screw down case back and there was more. The dial had been signed by Zurich retailer Türler adding an extra feature, one that was overlooked because when the hammer finally came down on this piece, it sold for £4,000.