Highlights From The Watches of Knightsbridge June Auction The end of June marks Watches of Knightsbridge’s second London auction of the year, though it doesn’t feel that long ago that we were going through their first 2018 catalogue. It perhaps goes without saying that we would inevitably highlight some of our favourite lots. That said, and I believe I’m not alone in saying this, flicking through the pages of this month’s auction catalogue, not only are there more lots but also some stunning pieces too. Of course, we’ve picked just a handful to give you a taste of what is to come next weekend. Lot 39: The Navitimer is arguably Breitlings most famous piece, but the story of the first examples tend to cause a bit of confusion and even a bit of controversy. The problem is, no-one knows for certain the full story of the first Navitimers and if someone does, they’ve yet to shed light on it. The records held by Breitling SA in Grenchen, Switzerland are incomplete. So, to tell the story of the most famous Breitling requires a serious amount of fact finding and to a certain extent, a bit of assumption; it is said that even the foremost world experts on vintage Breitling’s cannot agree on all the details. 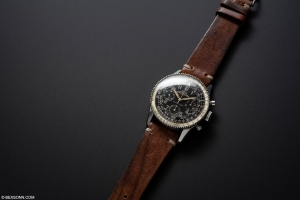 The name ‘Navitimer’ is a combination of the words Navigation & Timer, since the watch was originally developed as a navigation watch for pilots, who could use the slide rule to calculate remaining distances, fuel consumption etc. Though the Navitimer received updates, it has always been instantly recognisable. This 1963 example, is rather typical of the pieces made in the early 60s, it features an all matte black dial with a white outer slide rule scale that has patinated to a warm cream hue, an AOPA winged logo and houses the revered Venus 178 calibre; though there is one small detail that makes it standout. Of course, the all black dial is an indicator that it is an early execution, but it also features the coveted “beaded” bezel that features 93 beads, which is correct for this production year – something that Breitling collectors would’ve made a note of. That said, I still find it quite remarkable just how relatively cheap you can still pick these early Navitimers up for. Lot 124: Heuer over the past few years have seen a sharp increase in value,that said, this is only the case for early models from the Autavia and Carrera collection. While the Monaco was perhaps the earliest of them all to see record prices, interest in them have been rather muted but perhaps this is the best time to be buying a Heuer Monaco. The Heuer Monaco Ref 1133 is a fairly mature market in terms of vintage Heuer and when it comes to the Monaco there can only be one that evokes nostalgia – Steve McQueen’s Monaco, the Ref. 1133B. Sure there are prototype dials and other rarer variants, but for the iconic one, it has to be this. The condition of this Monaco is excellent, with a few tell-tale signs to distinguish an honest 1133B. Firstly, the dial is in great condition, with the familiar bold blue showing no sign of tarnishing and all lume plots present. The case, often in poor condition, is perhaps closer to how it would have left the factory. On the front, the distinctive vertical brushing is still evident. The pushers are correct, and the crown is signed, rounding off what is a great example of a 1133B Monaco. Lot 232: Seldom do we touch on the subject of military Seamaster’s but this example doesn’t really scream military but the deeper you delve the more that is revealed. Military Omega Seamaster 300’s has come into their own and have been gaining quite a bit of interest, this may have something to do with one that was sold at Bonham’s back in 2015 but who knows? Whatever the reason these watches are cool, perhaps not as cool as the CK2913’s in my opinion, but these bombe lung variants still demand respect. The first Military Seamaster 300’s were introduced in 1967 with a standard dial and sword hands. Some featured Naiad crowns, which was Omega’s version of the triplock crown. All military SM300 wristwatches featured engraved numbers on the back, with some also featuring the letter ‘T’ in a circle on the dial (denotes the use of Tritium), however, this particular W10 example is from the first batch of military issued pieces, which didn’t feature the circled T or screw down crown. But what it is accompanied by are its Omega archives, which tally up correctly, making quite a big difference 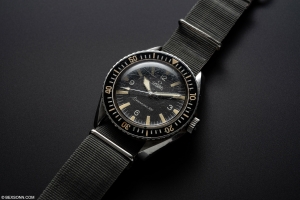 This rare Military Seamaster 300 from 1967 sports a black matte dial with Arabic numerals and tritium hour markers. It sports steel sword minute and hour hands. Inside is the 24 jewelled, calibre 552 automatic movement. The 42mm Military case is fitted with fixed lugs and features a 60-minute rotating bezel – demarcated all the way through to 60, though the 0 of 30 has discoloured, which adds a nice touch. Of course, being a Military issued Seamaster 300, on the case back are issue markings, which you can see in the image above. The lugs on this example are particularly well-preserved but what I think adds to the overall character is the crazed crystal. Lot 322: A Rolex icon, which is all the rage these days: the Cosmograph Daytona – after all it is the quintessential sports chronograph of the last five decades. As you’ll know, the Daytona was introduced as a motorsport racing wristwatch. This is the one Daytona we’ve chosen to highlight from the Watches of Knightsbridge June auction. Looking at this reference 6265 Daytona it is not blatantly obvious how much sought-after it is. If you look very closely, you’ll noticed that the hue of all print is slightly different; it is in fact silver in colour, something that collectors will duly take note of as this are just that little bit rarer. The 6263 & 6265 were first introduced in the latter part of the 60s and replaced the 6240. This 1974 Cosmograph Daytona has the same 37mm as its predecessor, with a Valjoux based 72 movement, which has seen some refinishing by Rolex making it a calibre 727. This particular example features a rare matte black sigma dial, which has aged beautifully, with the Greek sigma letters bookending “T SWISS T” – signifying the use of white gold hour markers and hands. The white sub dial registers appear to be rather crisp, with lume plots that are intact and have patinated to a warm cream tone. Lot 324: It perhaps goes without saying that I’ve always been a massive admirer of the simple and humble Rolex Explorer. It’s just an elegant and functional watch. Rolex launched the reference 6610 as a new generation “Explorer” wristwatch. The model housed the slim calibre 1030 movement that allowed for a flatter case back. The Explorer now had a more modern and sleek appearance compared with earlier references fitted with the thicker calibre A296 that required a rounded “bubble back”- type case, though these are still revered today. This Explorer 6610 features the classic black glossy, gilt dial and 3-6-9 hour numerals that defined the Rolex “Explorer” model. The reference 6610 is unusual for their standard gilt lettering and “Officially Certified Chronometer” designation. In very nice overall condition, this example is rare amongst the “Explorer” family. Rolex produced the reference 6610 for only five years, and in 1963 changed the movement from the calibre 1030 to the calibre 1560. The new reference – 1016 – became the best known of the “Explorer” line, which spanned over 25 years. Lot 326: As the successor to the first GMT-Master reference 6542, reference 1675 was launched in 1960 using a metallic bezel insert that replaced the fragile Bakelite bezels used in the 6542 models. This example from 1961 features a glossy dial with gilt text and chapter-ring, with markers that have aged gracefully to a warm cream colour, but as you’ll notice the dial reads “Superlative Chronometer Officially Certified” (COSC), though not as rare as those with OCC dials, it still displays charming qualities. The bezel has faded to an even, light shade of blue and red, and the case has great definition in the lugs. The early case features coveted pointed crown guards known as “Cornino” – making them truly collectible in the world of vintage Rolex. Fitted with a newer replacement Jubilee bracelet, which doesn’t detract from the overall allure of this example, however, finding an expandable Oyster riveted bracelet would be more in-keeping. It is also accompanied by its original box, papers, test certificate, purchase receipt and even the retailers guarantee. This GMT-Master 1675 is a highly wearable and attractive vintage sports Rolex for a collector. Lot 337: The Tudor Submariner perhaps possesses one of the most iconic designs around during the 70s. Collectors use the name “Snowflake” to refer to the Tudor Submariners with reference 7016/0, 7021/0, 9104/0 and 9411/0 produced from 1965 to 1975 and some newer reissue models. These watches featured square hour markers and a unique hand style that distinguished them back then, and still distinguish them today, from other watches. These models are well-known also because they were issued to the French Marine Nationale and as with MilSubs have become grails in the collector world. Although a diver’s watch at its core, the Tudor Submariner “Snowflake” like the Rolex Submariner also became a fashionable everyday wear. This reference 9411/0 Tudor Snowflake Submariner is a superb example, in overall good condition with strong case proportions. The matte black dial appears clean with square lume plots, which have aged to a deep creamy colour, though the hands are a tad lighter that could indicate they’ve been replaced at some point – though that may not explicitly be the case. Overall, it is in awesome condition but also accompanied by its original box, papers, booklets and tag, which are always an added bonus for any collector.

The Watches of Knightsbridge auction will take place on the 30th June 2018, make sure you visit the official website for this month’s full catalogue.