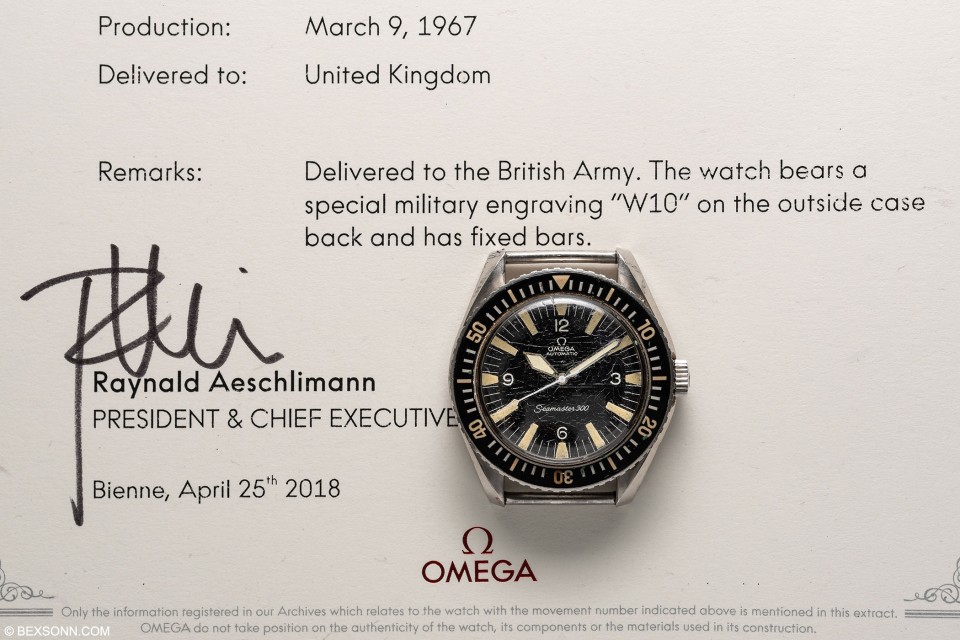 Last weekend Watches of Knightsbridge’s second auction of this year took place, so we thought it would be good to see how some of the lots we highlighted performed and our overall thoughts. While Watches of Knightsbridge don’t exhibit the high-end pieces from some of the more established auction houses, they always have some really intriguing pieces that are perhaps more attainable. It was also good to see some of the more underrated lots perform well on the day and exceed their higher estimates, that said there were a mixed bag of results with some lots somewhat underperforming. 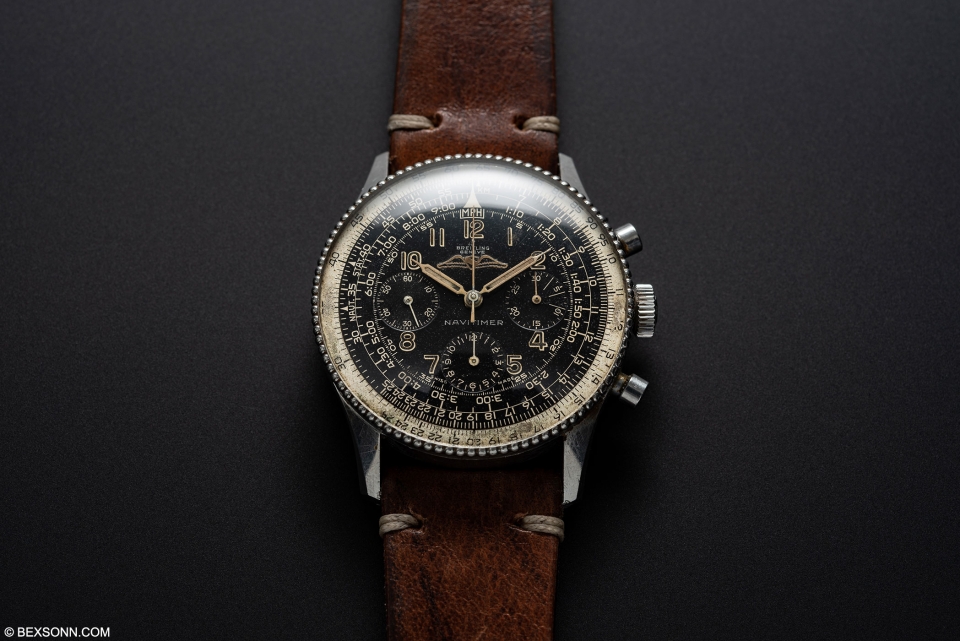 Lot 39: A 1963 Navitimer, which was rather typical of the pieces made in the early 60s, it featured an all-black dial with a white outer slide rule scale that had patinated to a warm cream hue, an AOPA winged logo and houses the revered Venus 178 calibre. It also featured the coveted “beaded” bezel that features 93 beads, which is correct for this production year – something that Breitling collectors would’ve made a note of. That said, patination hadn’t been particularly kind to the outer slide rule (which I happen to think lends more honesty), but did this have an effect on the hammer price? It sold for £3,200, which is an absolute steal in my humble opinion! 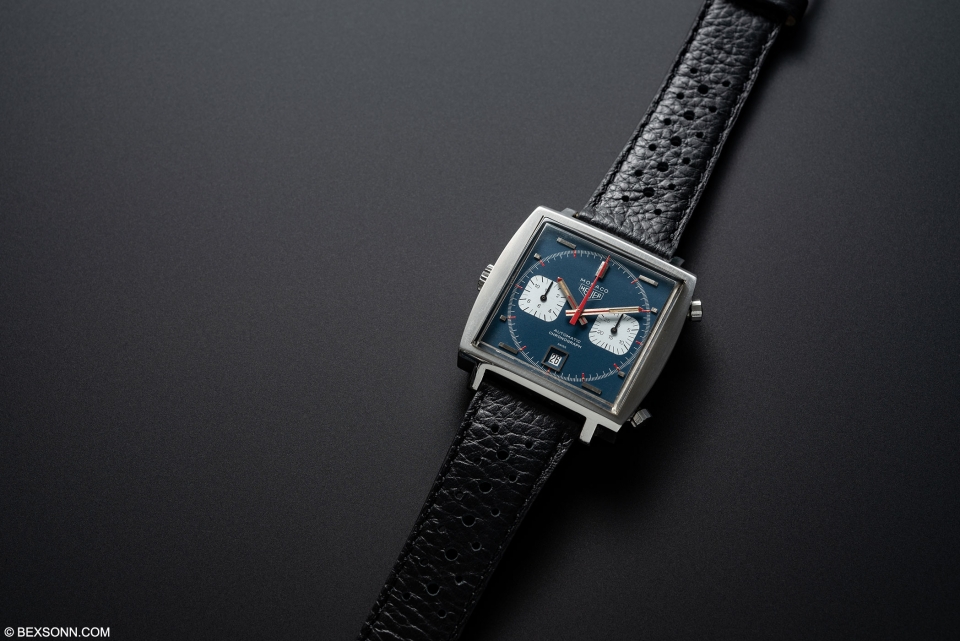 Lot 86: A Heuer 1133B, which over the past few years has seen rather muted interest and while I believe this is probably the best time to be buying a Heuer Monaco, not everyone would agree. The condition of this Monaco was excellent, with a few tell-tale signs to distinguish an honest 1133B. Firstly, the dial is in great condition, with the familiar bold blue showing no sign of tarnishing. The case, often in poor condition, is perhaps closer to how it would have left the factory. On the front, the distinctive vertical brushing is still evident and while condition is key, it would also appear that when a particular model is out of favour, it’s just out favour – hence this lot went unsold. 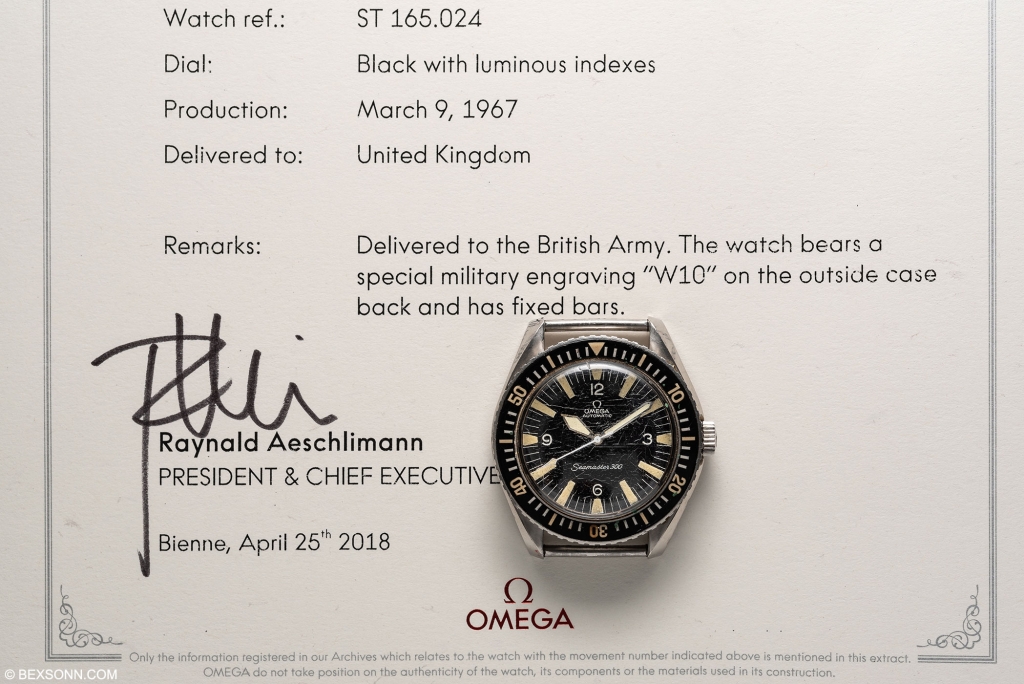 Lot 232: A rare Military Seamaster 300 from 1967. The 42mm Military case was fitted with fixed lugs and features a 60-minute rotating bezel – demarcated all the way through to 60, though the 0 of 30 had discoloured, which added a bit of charm. Of course, being a Military issued Seamaster 300, the case back featured issue markings. To add; the lugs on this example were particularly well-preserved but what I thought added to the overall character was the crazed crystal. This particular W10 example was from the first batch of military issued pieces, which didn’t feature the circled T or screw down crown. But what it was accompanied by were its Omega archives, which tally up correctly, which should’ve made quite the difference but did it? When the hammer fell it sold for £22,000, which isn’t cheap by any means, but many would’ve thought that it perhaps deserved more but one must remember not only does it look like a civilian example, but it also wasn’t a MOD issued piece, so this lot technically performed rather well. 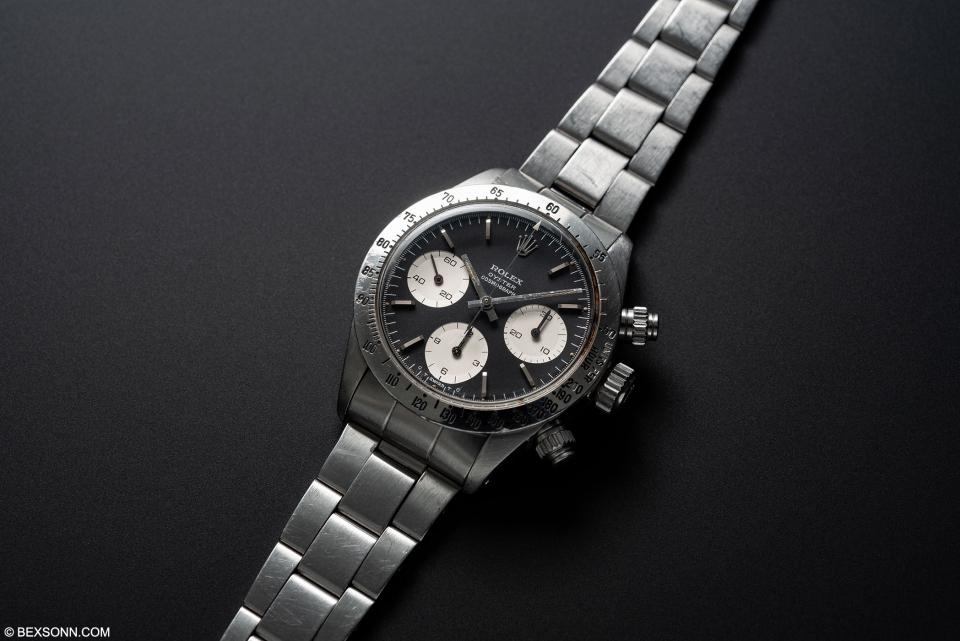 Lot 322: A 1974 Rolex Cosmograph Daytona, which featured a rare matte black sigma dial, which had aged beautifully, with the Greek sigma letters bookending “T SWISS T” – signifying the use of white gold hour markers and hands. However, the standout detail on this piece was the hue of all print, which was slightly different; it was in fact silver in colour, something that collectors will duly take note of as this are just that little bit rarer. But with all this, how did it perform. It sold for £35,000 not exactly cheap but one would’ve expected it to perhaps perform a little better. That said, the steel 6265s are not exactly the most sought-after examples from the Daytonas of the 60s & 70s. 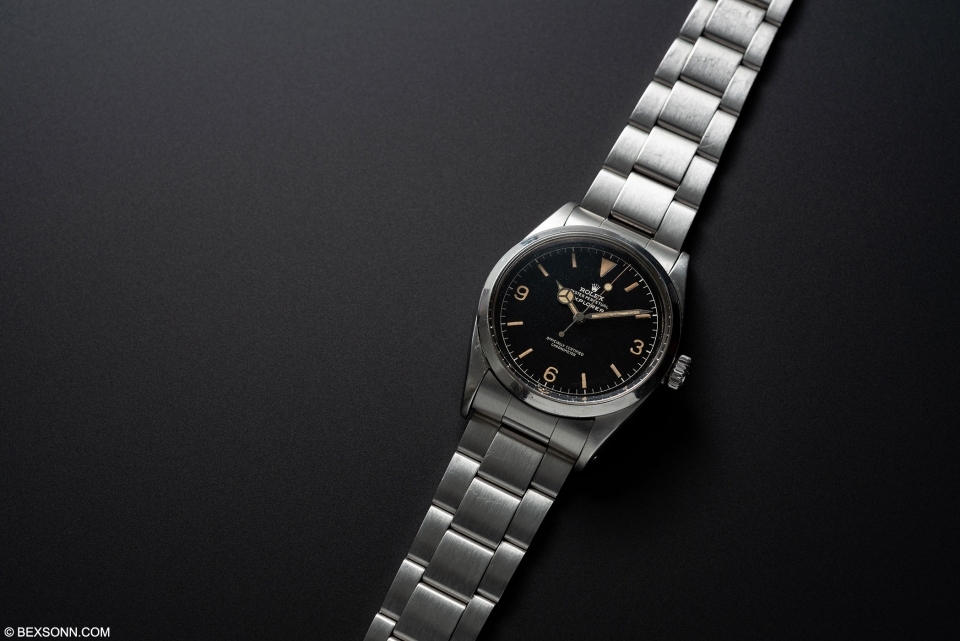 Lot 324: An early Rolex Explorer 6610, which of course featured the classic black glossy, gilt dial and 3-6-9-hour numerals that defined the Rolex “Explorer” model. The reference 6610 is unusual for their standard gilt lettering and “Officially Certified Chronometer” designation. It was in great overall condition and these examples are rare amongst the “Explorer” family. Rolex produced the reference 6610 for only five years, and in 1963 changed the movement from the calibre 1030 to the calibre 1560. The new reference (1016) became the best known of the “Explorer” line, which spanned over 25 years. So, while the ref. 6610 is not extremely rare, it is without doubt much scarcer than the 1016 but would this impact its sale price? Not exactly, it actually underperformed and sold for just £11,500 – which is a tad below its lowest estimate but obviously above its actual reserve. Again, another steal for any collector. 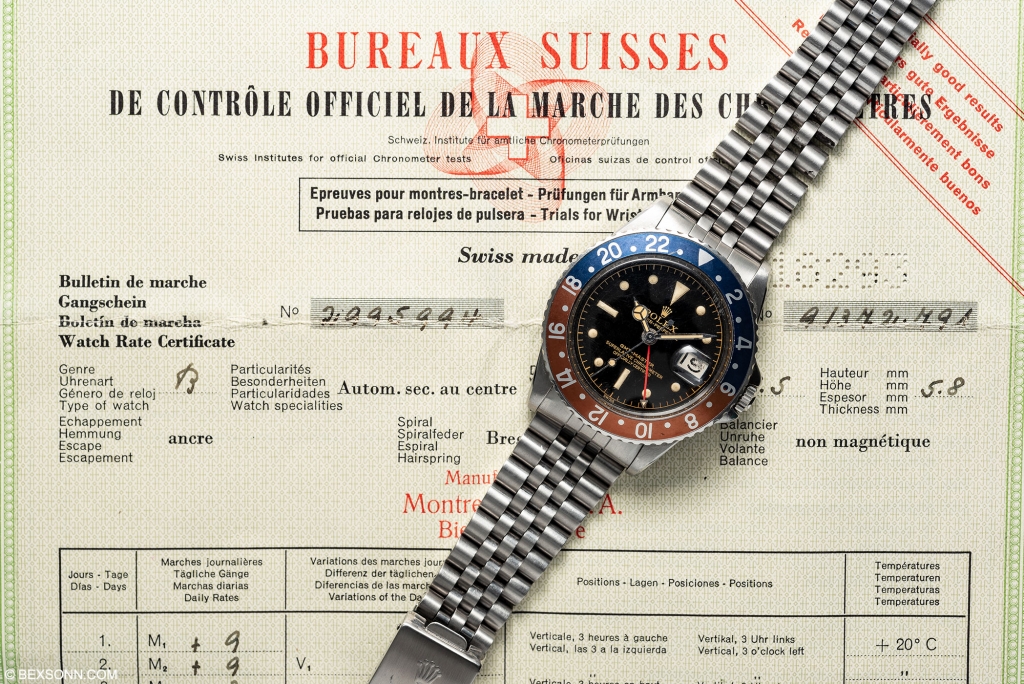 Lot 326: A 1961 Rolex GMT-Master with glossy dial, gilt text and chapter-ring and markers that had aged gracefully to a warm cream colour, but as you’ll notice the dial read “Superlative Chronometer Officially Certified” (COSC), though not as rare as those with OCC dials, it still displayed charming qualities. It also featured the coveted pointed crown guards known as “Cornino” – making it highly collectible in the world of vintage Rolex. Fitted with a newer replacement Jubilee bracelet, which didn’t really detract from the overall allure of this example. And what’s more it was also accompanied by its original box, papers, test certificate, purchase receipt and even the retailers guarantee. What did all these little details add up to, quite a bit as when the gavel came down on this lot, it sold for £24,000 – yup, almost double the higher estimate. 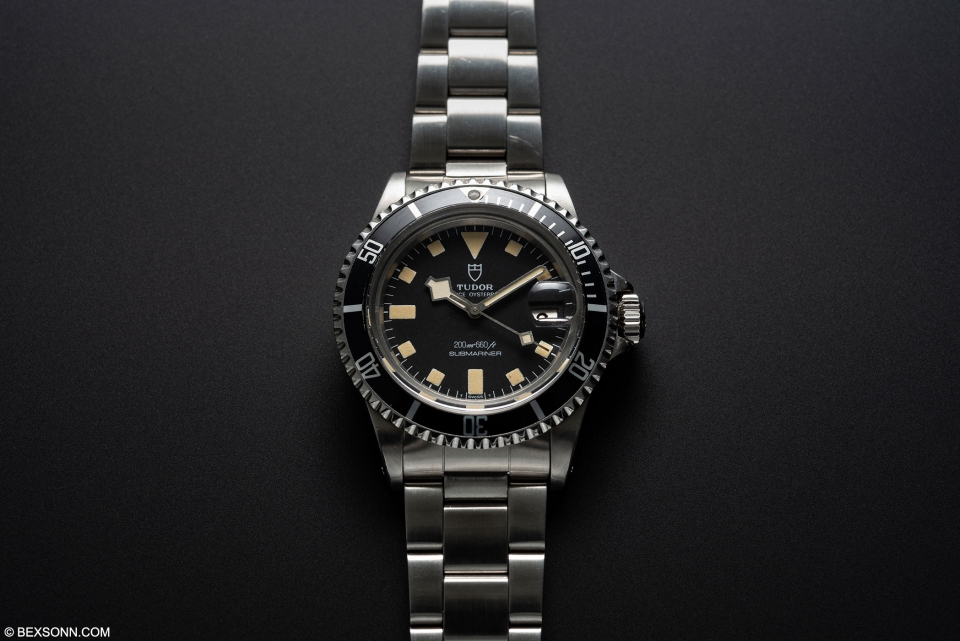 Lot 337: A superb example in my humble opinion of a Tudor Submariner Oyster Date reference 9411/0, which was in overall good condition with strong case proportions. The matte black dial appeared to be clean with square lume plots, which have aged to a deep creamy colour, though the hands are a tad lighter that could indicate they’ve been replaced at some point – though that may not have explicitly been the case. Overall, it was in awesome condition but was also accompanied by its original box, papers, booklets and tag, which are always an added bonus for any collector. However, these details didn’t appear to resonate as loudly with collectors, as when the hammer fell it only sold for £4,300, again below its lowest estimate but obviously above its actual reserve. 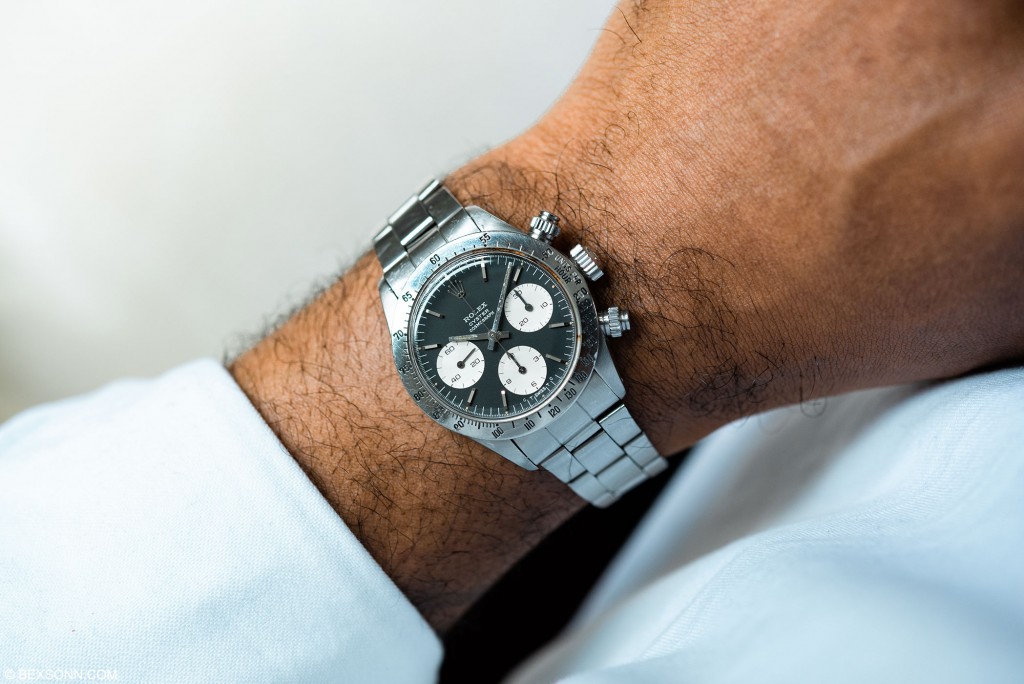 Overall it would appear, from the outside, that Watches of Knightsbridge June auction was as mentioned above; a mixed bag of results. While we saw lots like the Omega Seamaster perform strongly, as well as the Rolex GMT-Master we highlighted (that will likely go straight into a collector’s collection and perhaps not been seen for a while, as it was just that good), there were a quite a few lots that to many, us included, didn’t appear to perform very well at all.

But when you take a step back and have a look at the auction you’d have notice there were just over 400 lots in this auction, considerably more than their March auction and in all honesty if you’re a collector or dealer (yes dealers do buy watches from auctions too), you’d have bagged yourself some absolute bargains on the day, well from those lots that underperformed. And yet, Watches of Knightsbridge this past weekend actually recorded one of their most successful grossing auctions to date, despite the dip sale percentage comparing to their last. So, as mentioned, while things from the outside didn’t look that positive, when you take a step back and look at the numbers it would appear things went better than we initially thought.