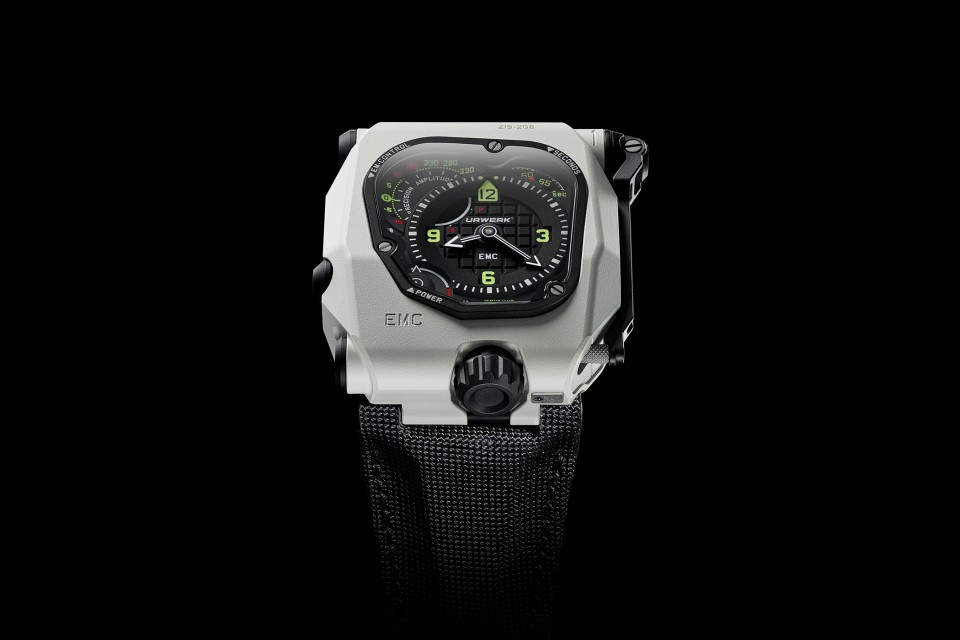 It was almost 7 years ago when we saw Urwerk’s first EMC timepiece but even so, it still feels rather fresh and new. The uber cool innovation that is Urwerk’s EMC (Electro Mechanical Control) timepiece. It would appear that the EMC White Ceramic aka Stormtrooper was an easy nickname to choose, from Martin and Felix’s love of sci- fi and in particular, Star Wars. The universe that George Lucas built has heavily influenced the design of Urwerk timepieces over the years.

The EMC “Stormtrooper” is crafted from steel and its caseback from titanium. Its aesthetic is not round, square or cushion-like, nor indeed any of URWERK’s signature indefinable shapes. This hyper-technical “machine” hugs the contours of the ‘motor’ inside and submits to the constraints of its various organs. It is not symmetrical, regular, flat or curved, yet remains aesthetically pleasing and distinctive. EMC’s design obeys its overall function and breaks the rules with a unique personality. Furthermore, its stainless steel ‘hood’ is micro-beadblasted and then given a hard, matt ceramic lacquer-type treatment. As a result, the surface of the EMC TimeHunter “Stormtrooper” has a grainy finish which highlights it utilitarian quality. 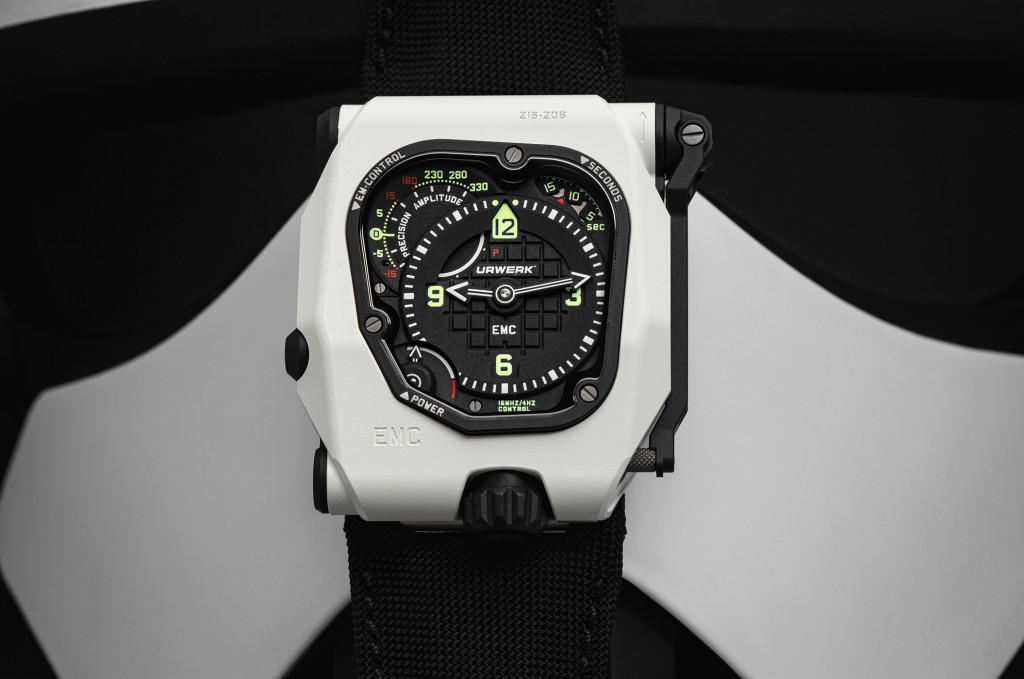 Legibility is of course important and as such features a matte black dial with separate zones. A clockwise tour of the displays from the top displays the indications linked to the chronometric (precision timekeeping) monitoring function are concentrated at 11 o’clock and indicated by the “EM Control” marking on the screw-down bezel. The rate accuracy is graduated from -15 to +15, using seconds as the measurement unit for the daily rate deviation. The amplitude ranges from 180 to 330, measured in degrees. In the top right you’ll see your seconds indication with the main dial asymmetrically placed below EMC and seconds indications, with an 80-hour power reserve indicator placed to the bottom right between 7 o’clock. 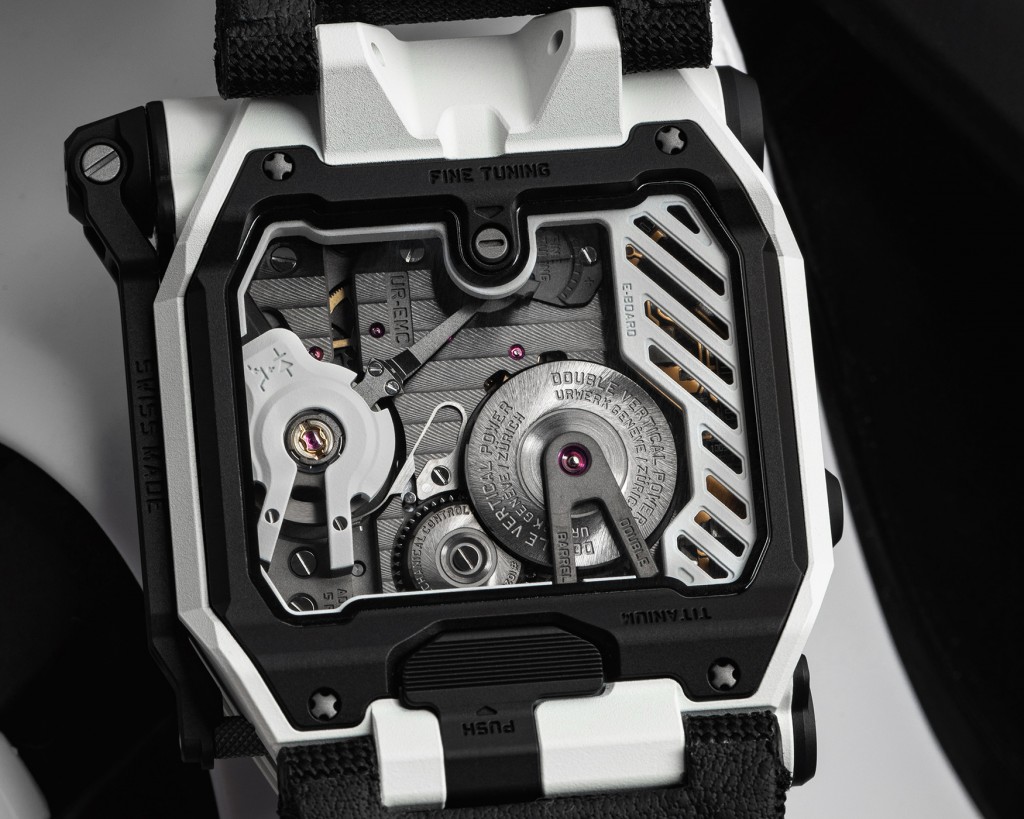 Turning EMC over reveals the fully in-house movement with the integrated circuit board – the EMC brain. It is an entirely mechanical watch, optimised with the help of an electro-optical circuit. On the one hand, its hand-wound movement stems from the mind and hands of Urwerk. Designed exclusively for the EMC collections, the UR-EMC2 calibre is entirely crafted, finished, assembled and adjusted by Urwerk. However, as you well know there are two sides to the movement that incorporates an electronic module whose function is to measure the rate of the mechanical part. It has its own power source, separate from the rest of the movement. Positioned on the side of the case, a large retractable lever raises a dynamo which feeds the control micro-circuit. 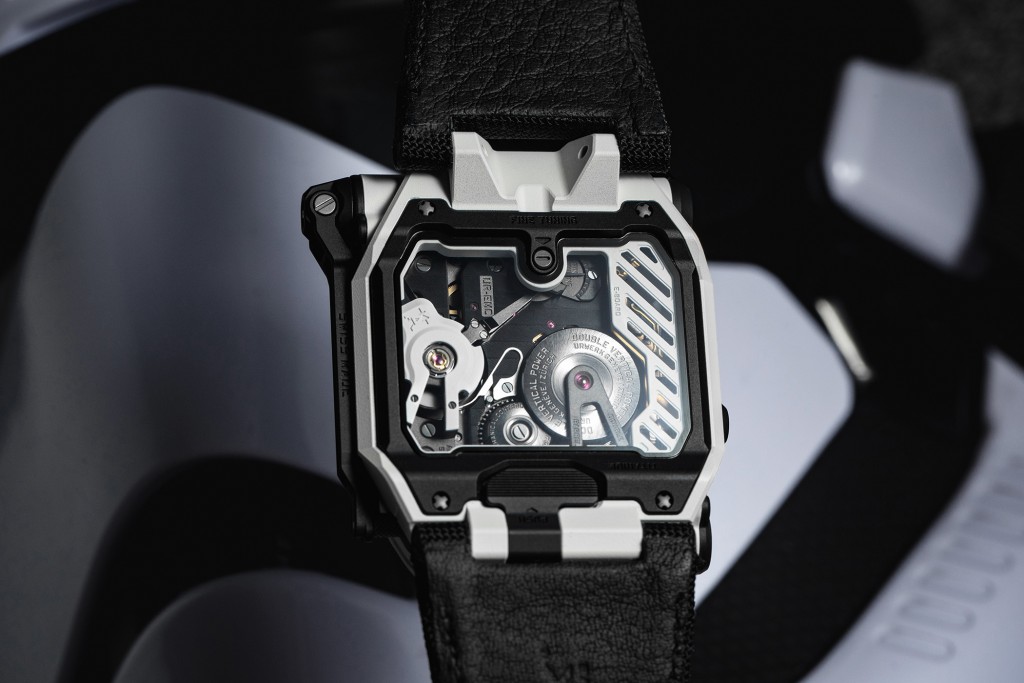 When putting this innovative notion into action, you’ll find it quite an easy yet enjoyable task to carry out. On one side, the ‘engine’; and on the other, the control unit. Yet these two entities are not sealed off from each other, quite the contrary. They are integrated, nested and Urwerk has created a means of access to both that makes EMC TimeHunter the world’s only truly wearer-adjustable watch. A timing adjustment screw makes it possible to manually fine-tune the oscillation speed of the balance and thus to correct the variations in rate that inevitably appear over time and are intimately dependent on the use made of the watch by its wearer. This corrector is located on the back of the watch and is duly indicated by the engraving “Fine Tuning”. It manages the behaviour of the movement at its very heart, by modifying the length of the regulating balance-spring. 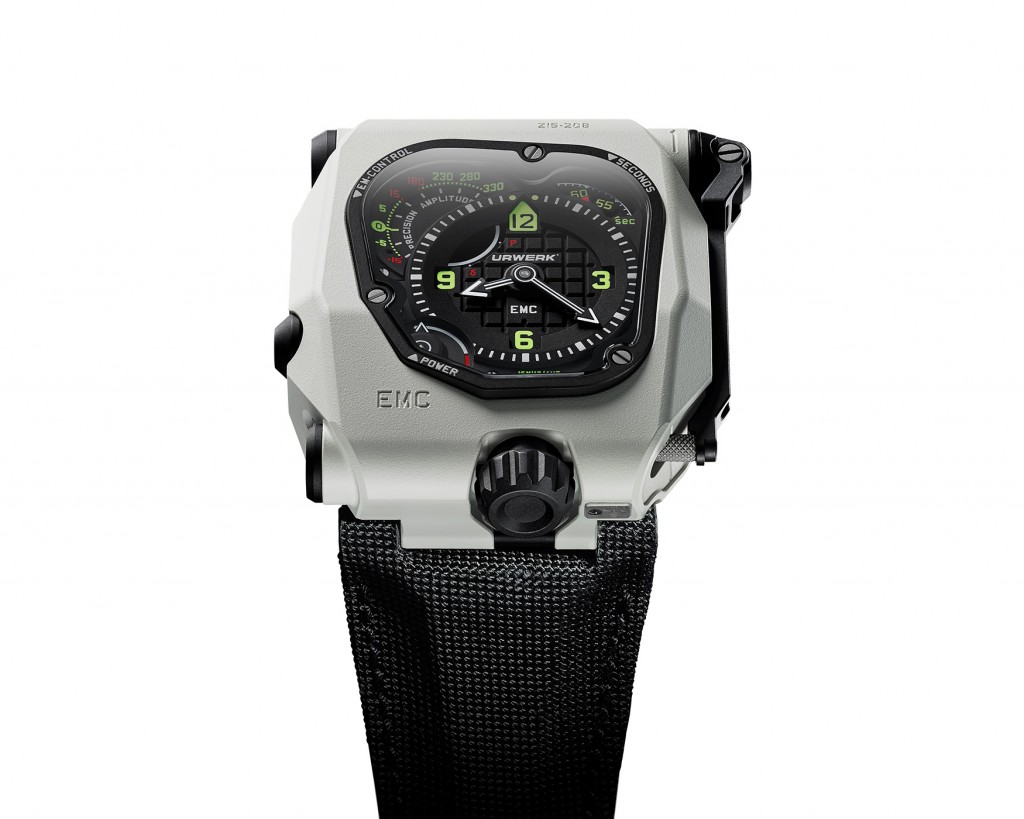