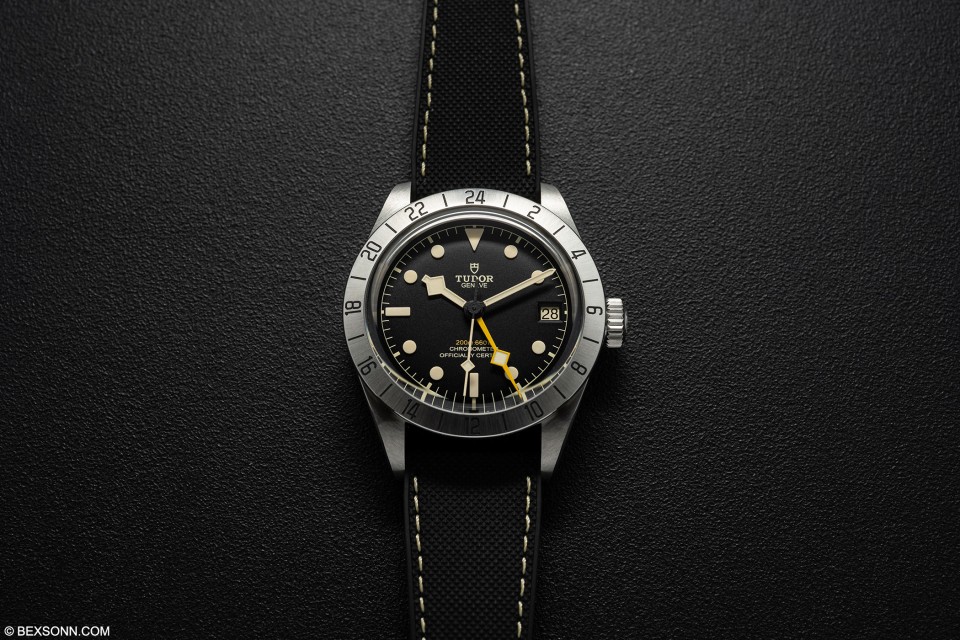 It wasn’t that long that Tudor introduced their first GMT, and this year they also introduced a steel and gold version, but no one really saw the Black Bay Pro coming. Last year, Rolex introduced a new and improved Explorer II – to celebrate 50-years since its inception, but this perhaps wasn’t the update many had been waiting for. Fast-forward to 2022 and guess what, Tudor unveiled the BB Pro – which is more akin to the Explorer II many had indeed been waiting for but of course in the guise of a Tudor Black Bay case. 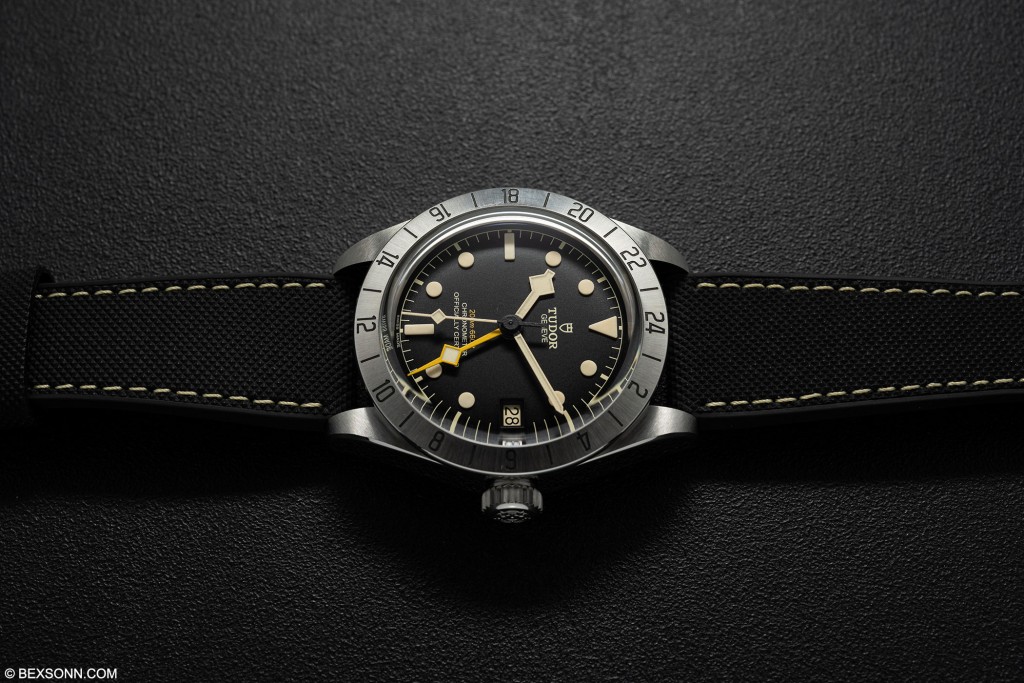 With that said, what was the original intention of the Explorer II? It was a rather peculiar watch to most but Rolex being Rolex don’t just make wristwatches for the sake of making watches. While it may have very little use to most of us it is still iconic. Introduced in 1971, the Explorer II was launched as an Explorer with an additional function – hence the II. Aimed at speleologist (cave explorers), who worked in the dark for most of the time, it is said that they could easily lose track of time and become a little discombobulated, which is the reason Rolex introduced this piece. So, as you’ll notice what may look like a nice large orange hand for tracking a second time zone, is in fact a day/night indicator, with a bezel marked with a 24-hour scale. 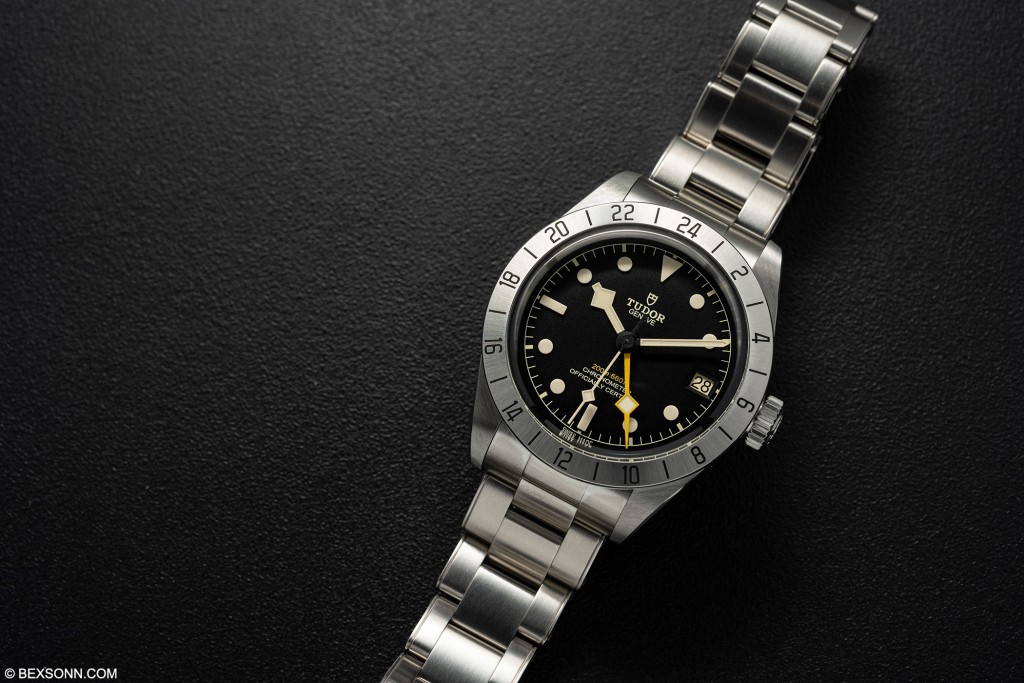 However, the Black Bay Pro is perhaps more of an ode to Tudor’s past partnerships with explorers who embarked on an expedition to North Greenland to study Arctic ice, who wore Tudor watches on their wrists. Whatever the reason for this new Black Bay, it evokes the spirit of adventure and embodies aesthetics of the original Explorer II – a touch of genius from Tudor if you ask me. 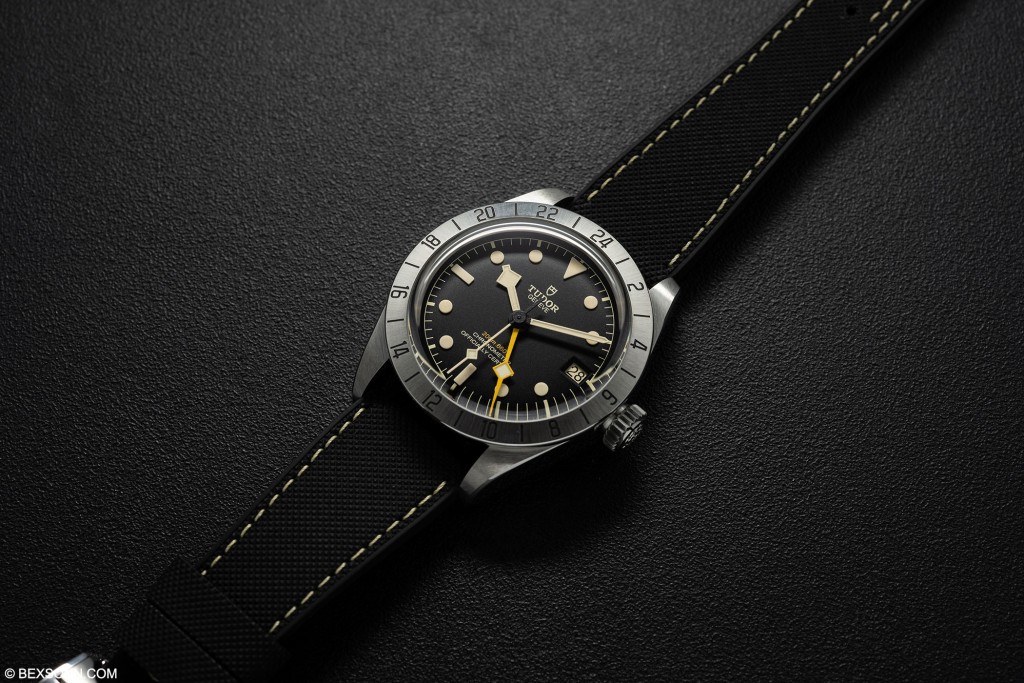 This all-new BB Pro sports a 39mm case made from stainless-stee, with a mixture of satin brushed and polished angles. The Black Bay Pro is waterproof to 200 metres (660 ft) and as said by Tudor “designed to withstand the elements.” The case is finished in a fashion we’ve come to expect from Tudor, with precision but retaining that tool-watch charm and likeability, hence the reason it is available on a choice of three bracelets: black Jacquard fabric, riveted steel bracelet or a hybrid strap in black rubber and fabric with a folding clasp. 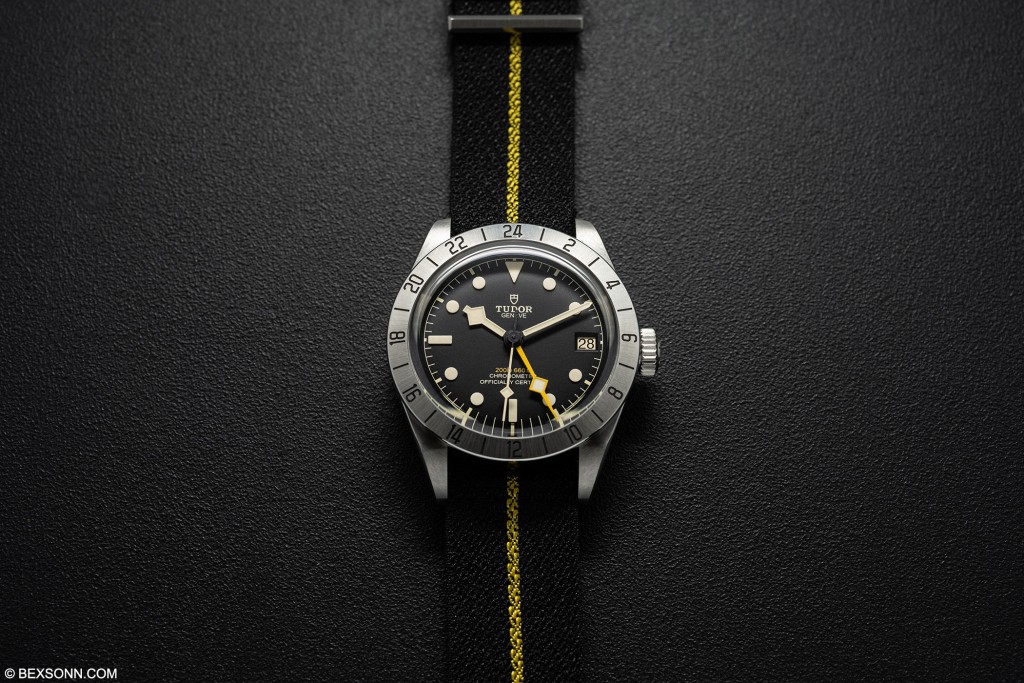 The steel fixed bezel is calibrated for 24 hours, with odd numbers/hours denoted by a line. As the bezel is made from steel, it has been given a satin-brushed that adds a certain rugged quality to it. One of the standout features of the bezel that I really like are the use of elongated numeral font, that mirrors the font found on the BB GMT. 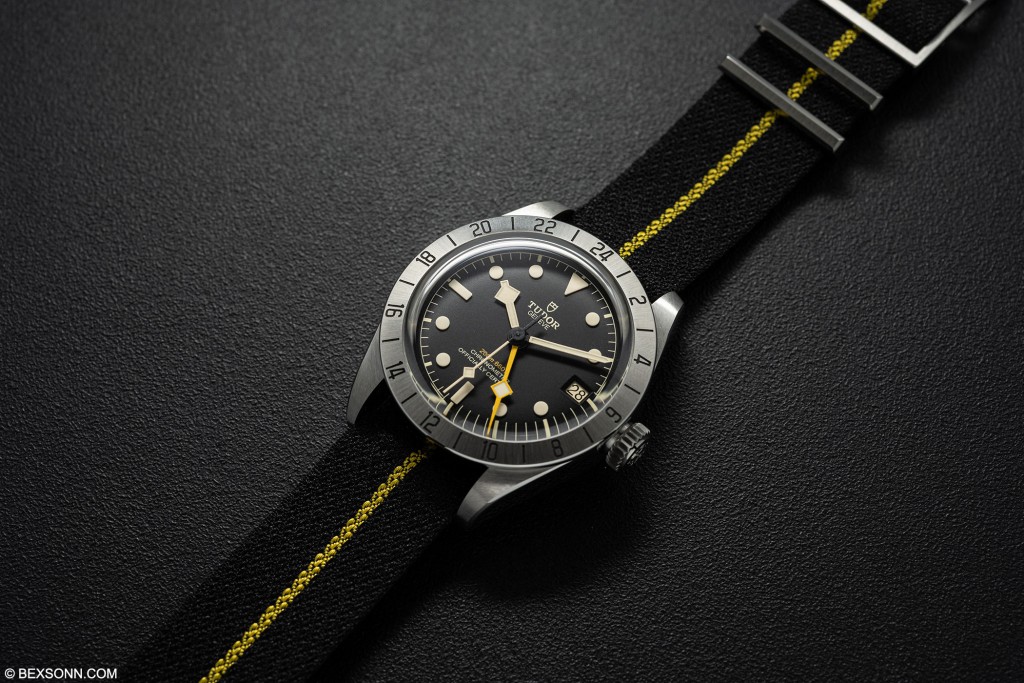 The dial is styled in the typical fashion we’ve come to expect from Black Bay; it’s a matte black affair, with large, applied markers, inlaid with Super Luminova and a unintrusive date aperture at 3 o’clock. The time is indicated via “Snowflake” hands, a trademark of Tudor timepieces. Though you’ll notice a longer yellow hand, which completes a full revolution once every 24-hours. The jumping hour hand serves two purposes 1) it can be used as a second time zone and 2) it can be used to quickly advance the date. 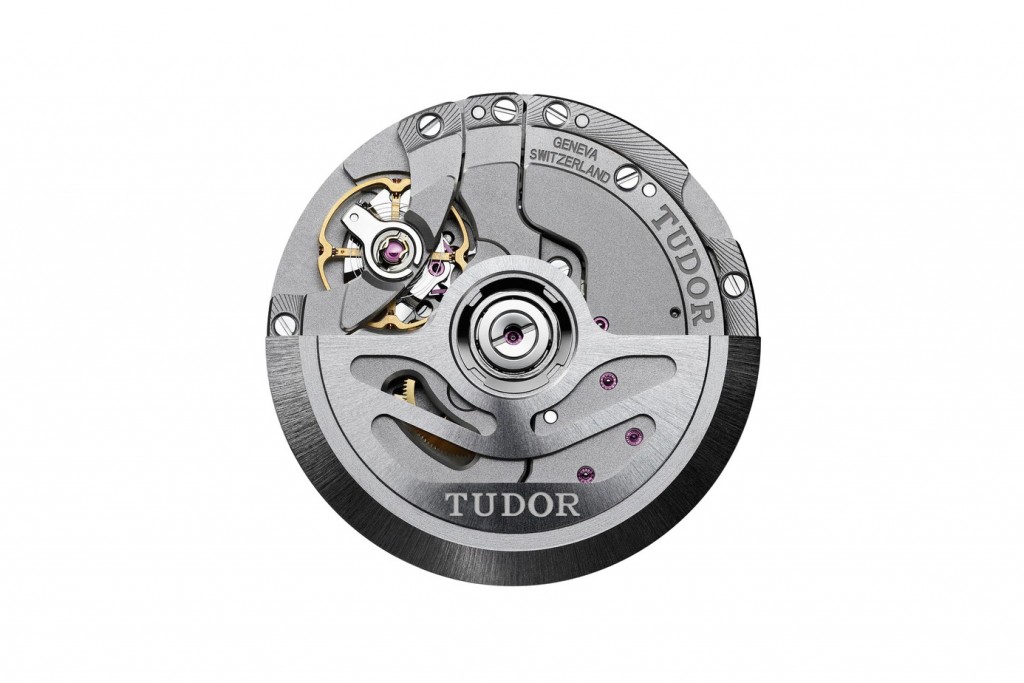 Tudor developed a new in-house calibre reference MT5652 for the Black Bay GMT model back in 2018 and have used the same movement in this new Black Bay Pro. The GMT functionality has been fully integrated into the movement rather than modular, this approach has given Tudor a more flexible calibre that allowed them to keep this new movement svelte and identical in thickness to the standard Black Bay. The COSC certified calibre MT5652 offers a power reserve of 70 hours, featuring distinguished finishing on its bridges and main plates, as well as a satin-brushed rotor all measuring some 31.8mm in diameter and 7.52mm thick. 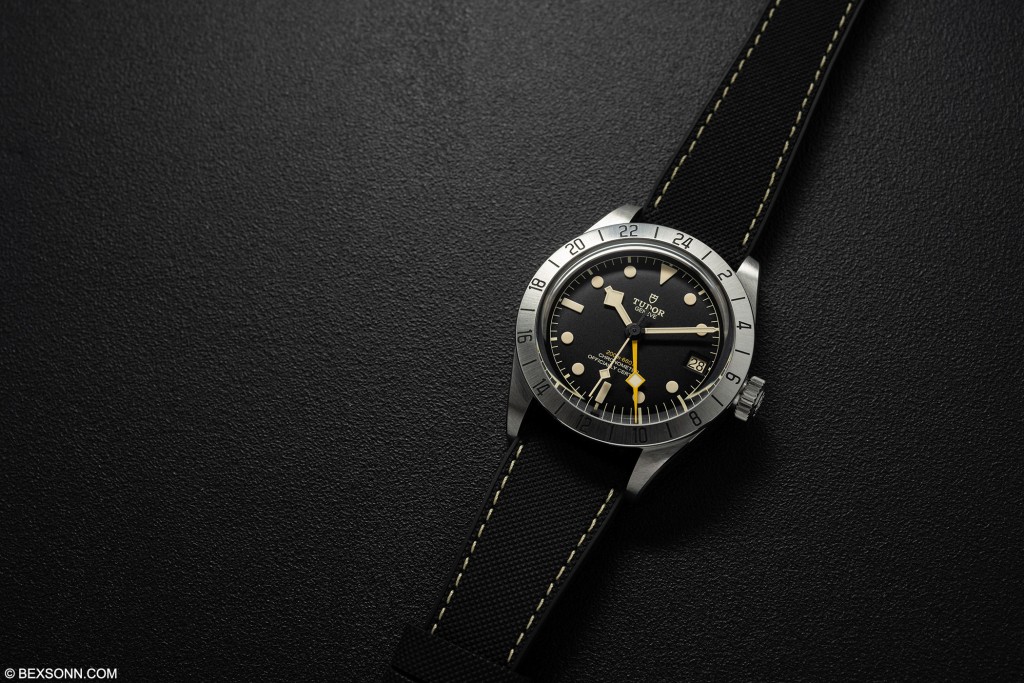 I really like this new Black Bay Pro from Tudor, and the conscience use of aesthetics from the Explorer II. Its rugged charm is evident, and the GMT functionality makes it perfect for the adventurer. The thing I admire about is how understated it is. Unlike its shinier, more expensive, and seemingly impossible to find older sister the Black Bay Pro is much subtler, with its satin brushed angles and gentle hue of matte black dial and satin brushed bezel – it’s an old tried and tested recipe.

The Tudor Black Bay Pro on the riveted steel bracelet is priced at £3,080 and is priced at £2,840 on the rubber strap or fabric strap. For more information on visit tudorwatch.com. 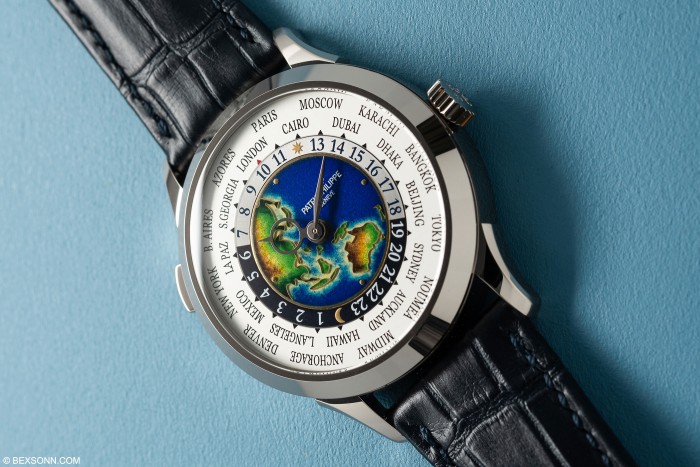