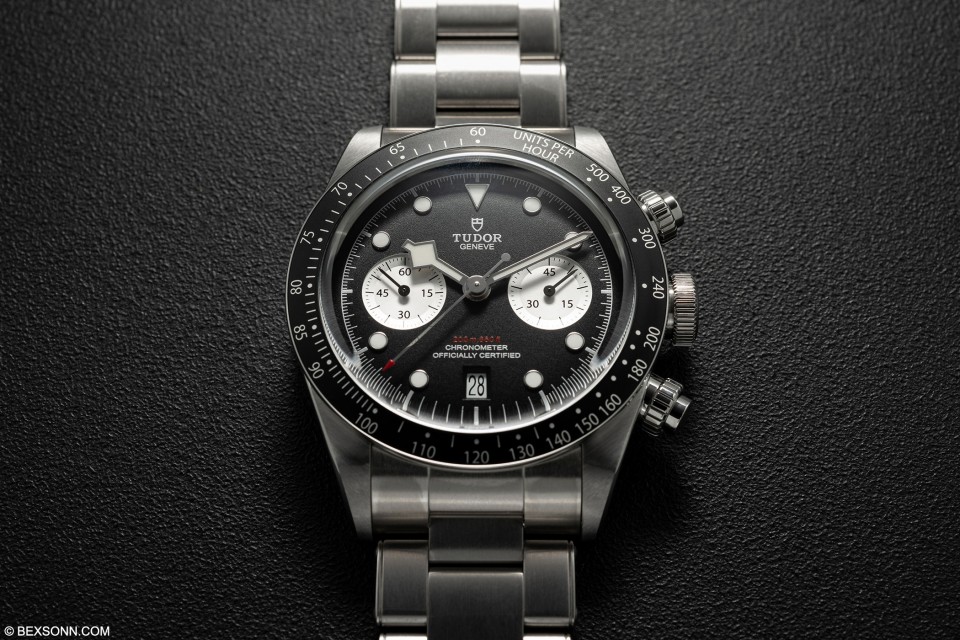 Tudor seem to be on a bit of a roll these days and while they haven’t really created any new models, the 2021 novelties that have seen them embrace materials they’re not synonymous with, as well as dial combinations that have made a real impact. Another piece from Tudor that piqued our interest was this new Black Bay Chronograph Steel, with a panda and reverse panda dials – reminiscent of their iconic “Big Block” chronographs. The first Black Bay Chronograph was introduced back in 2017. This year Tudor saw it fit to introduce another interpretation of said timepiece. This iteration has perhaps caught our eye for a good couple of reasons, 1) being Tudor’s great price points in general and 2) it’s uncanny similarities to its big brother’s sports chronograph.

As mentioned, this new Black Bay chronograph in steel reminds me a lot of the “Big Block” chronographs. The Big Block was introduced in 1976, the third series of chronographs saw Tudor take a big leap, in terms of innovation and also in size. Unlike its big brother at the time, it would now feature automatic movements, making the Big Blocks the first self-winding chronographs from the Wilsdorf group – yup, well over a decade before Rolex introduced their first automatic Daytona chronograph; the Zenith-powered reference 16520. This was a big deal for Tudor at the time. The name “Big Block” came about because the rotor of the self-winding mechanism required a redesign – meaning the watch case had to be made deeper, hence the collectors’ term Big Block.

The first Big Block chronographs were the 9400 series, which ran until approximately the late 1980s. In the late 1980s these were replaced by the 79100 series; however, these pieces had a more Daytona-esque appearance. That said, they still retained their deeper “Big Block” cases. 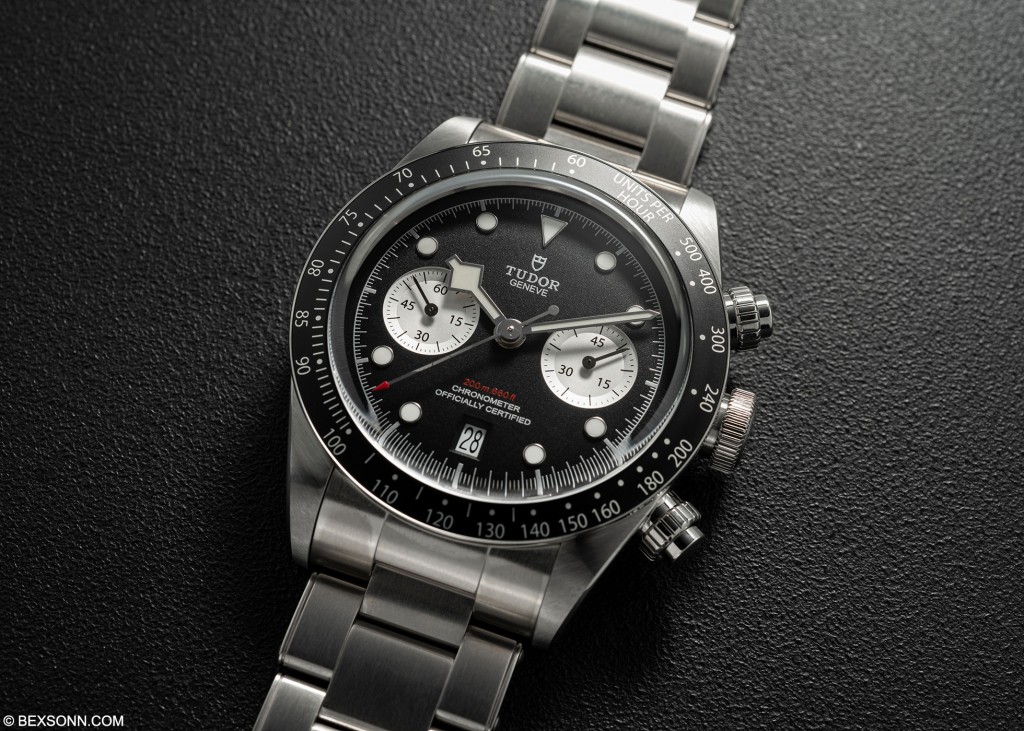 The new Black Bay chronograph, while thicker than say the BB58 is actually thinner than the “Big Block” and sports a slimmer 41-millimetre steel case and equipped with pushers that hark back to the early Tudor millerighe examples. It also features a black anodised aluminium bezel with silver print tachymetric scale, which is graduated to base 500 units per hour. The dial is an all matte black affair with the registers at 3 & 9 o’clock highlighted in opaline, with a silver minute scale and text, or vice versa if you opt for the opaline dial. Though the depth rating of 200M has been highlighted in red, matching the central chronograph seconds arrow tip. 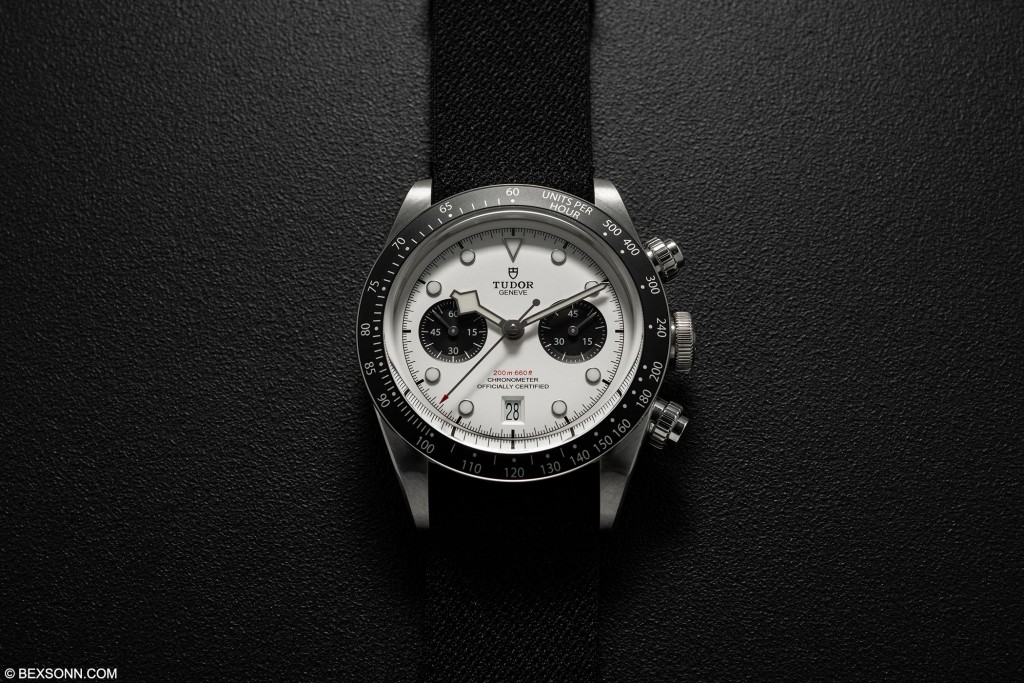 The Black Chronograph is fitted with a 70-hour power reserve, a silicon balance spring and Official Swiss Chronometer Testing Institute certification. The calibre MT5813 that drives this new Black Bay Chrono model is a high-performance movement, which is based on the Breitling B01 but has been modified by Tudor and I’m told rotated slightly to allow the watch to retain its slimness. The movement itself is designed in the purest watchmaking tradition, with a column-wheel mechanism and vertical clutch. 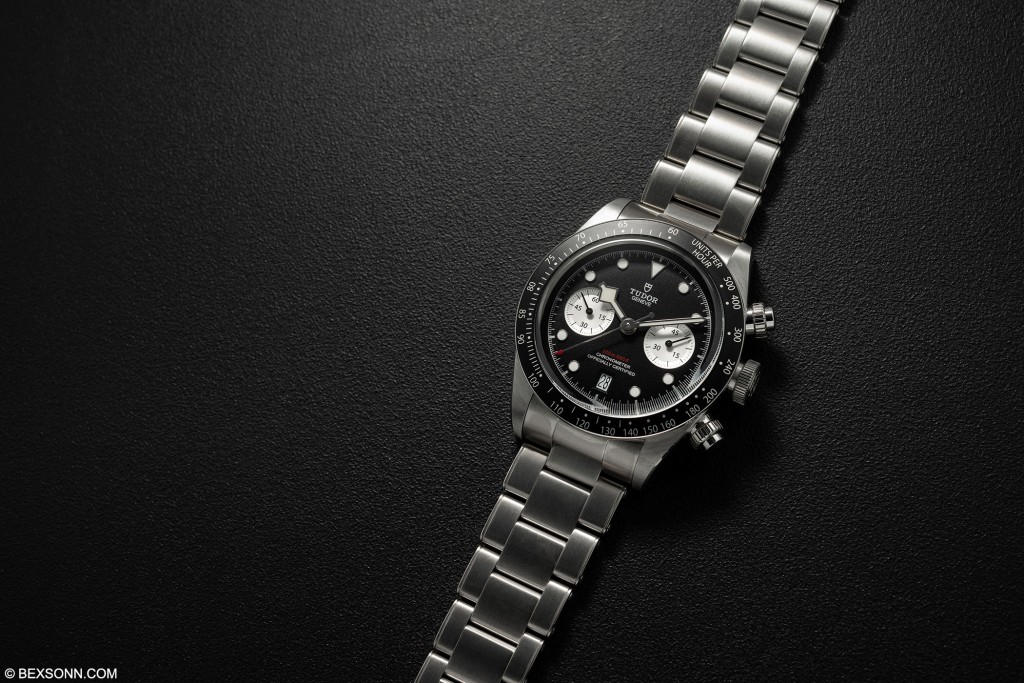 Another touch that adds to the overall aesthetics of the Black Bay Steel, is the bracelet it’s been paired on. We first saw this 1950s/1960s vintage inspired, riveted bracelet in 2016 on the Black Bay Black. This modern interpretation is true to form and features the very distinct stepped construction, though instead features faux rivets and modern solid links that offers a vintage look but has modern robustness. The Black Bay is also available with an aged brown leather bund strap with deployant clasp, or on a black fabric strap – which I have to mention has to be one of the finest woven fabric straps around. 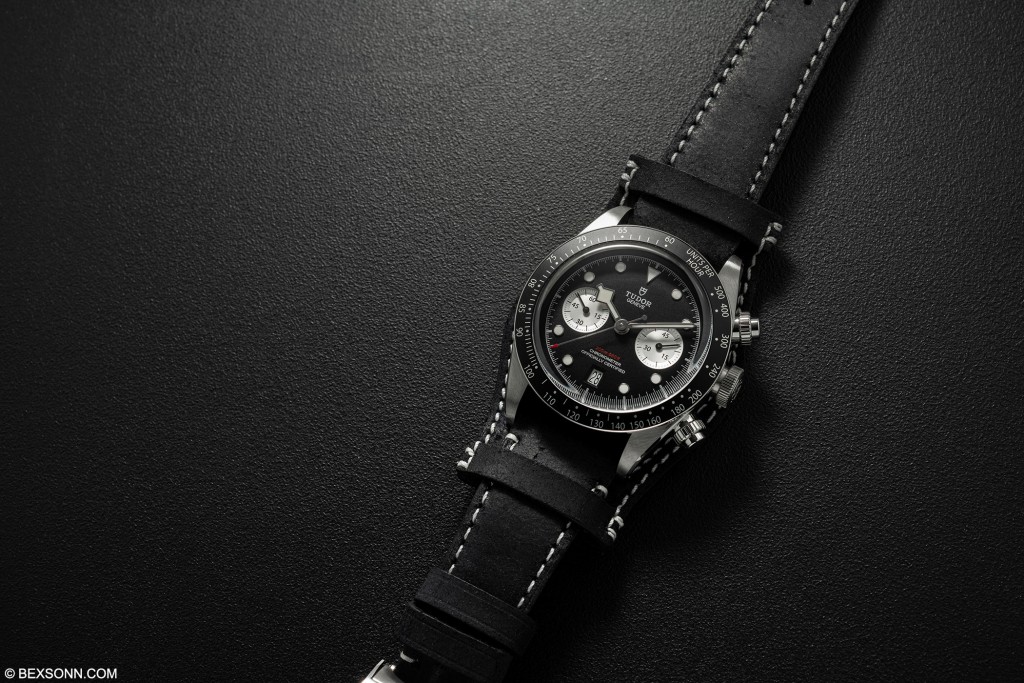 Tudor have been ahead of the curve for some time and the blending of vintage details into their modern watches is commonplace. That said, what Tudor been marrying together isn’t just examples from their back catalogue but also of their sibling brand: Rolex.  The dial of this new BB Chrono has something of a resemblance to the early Daytonas as well as their own “Big Block”. These subtle vintage design traits in a contemporary timepiece, offer nostalgia and practicality in one package, which is something that Tudor have done so well. Ushering in the new without forgetting the old…

The Tudor Black Bay Chronograph Steel on the riveted steel bracelet is priced at £3,900 and is priced at £3,660 on the distressed leather or fabric strap. For more information on visit the official Tudor website.