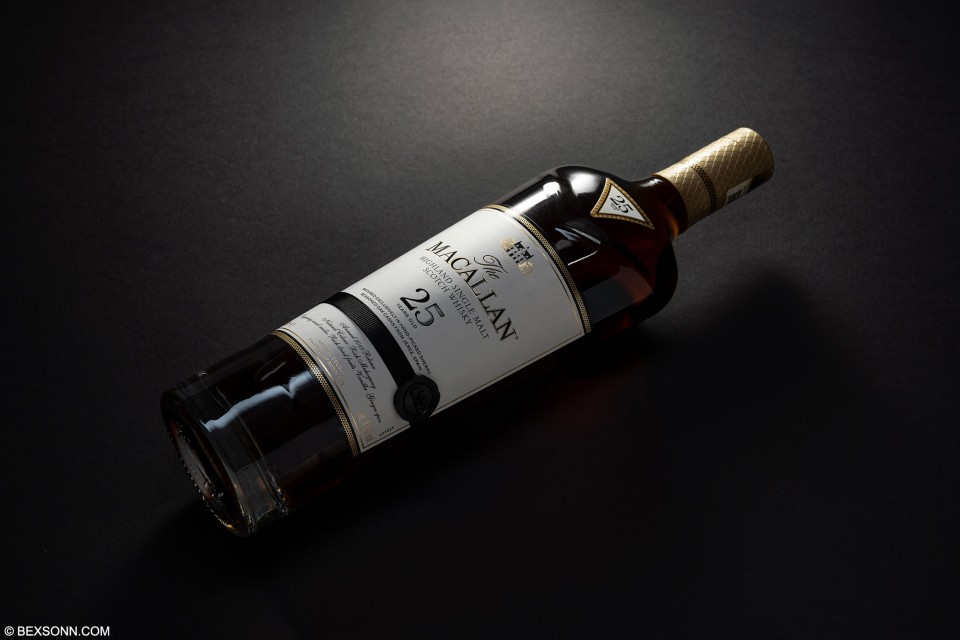 We’ve highlighted the 12-year-old, entry-level and the more sought-after 18-year-old single malt scotch from Macallan’s sherry oak finish range over the years. As you may already know, The Macallan is the third largest selling single malt scotch in the world and Macallan’s Scotch whisky is, primarily, matured in oak seasoned with sherry brought to the distillery from Jerez, Spain. The sherry cask finish scotch from Macallan is what could be considered their core age-statement range. That said, the 25-year-old expression from this range is perhaps one of their rarer drops. This distinguished single malt is matured exclusively for twenty-five years in Oloroso sherry seasoned oak casks from Jerez, Spain. Laying undisturbed in the same casks for a quarter of a century.

On the nose: there’s a lovely waft of currants, dried fruits, blackberries, oranges, almonds and vanilla. These initial notes are closely followed by notes of plums, cinnamon, star anise, brown sugar and cracked black pepper. Rounding-off the nose are notes of leather, dark chocolate, a hint of lemon zest, subtle smoke, green herbs and whiff of tobacco leaf. On the palate: those notes of mixed fruits and raisins are evident, followed by marmalade, maple syrup, plums and walnuts. Notes of chocolate start to appear, followed by salty caramel, lemon zest, star anise, cinnamon and meaty note. Completing the palate are notes of toffee, a musky note, some floral notes and tobacco smoke. The finish: is long, with lingering notes of currants, spices, herbs and nuttiness.

The verdict: The 25-year-old expression displays classic Macallan notes with every sip. From nose to palate is a joy, with a finish that is something to savour. The Macallan 25yo has an ABV of 43%. This whisky showcases the typical sherry bombs that I’ve sampled from Macallan and is a testament to their skill in creating beautiful drops of liquid gold.

The Macallan 25 Year Old Single Malt Scotch Whisky can be found at any well-sticked whisky shop for approximately £1,500. For more information on this 25-year-old expression from the Sherry Oak range, visit themacallan.com .