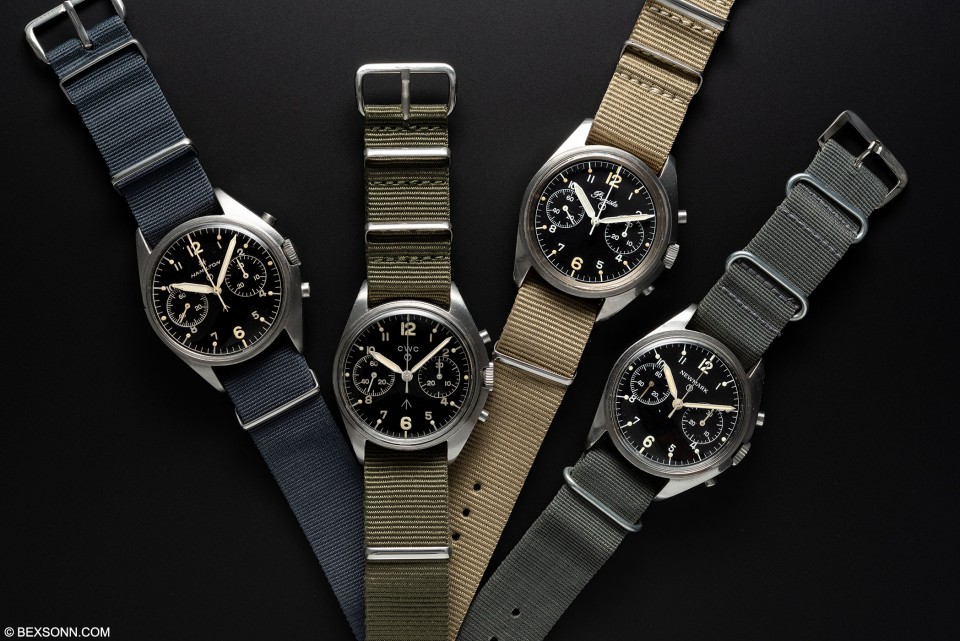 This weekend in London, Watches of Knightsbridge will be having their mid-year auctions and the great thing for us here at Bexsonn is that we get to see all kinds of rare vintage pieces. As usual, we will highlight some of the more interesting lots and with only a few days to go till the auction, I want to highlight a set of four watches that were issued to the British military known affectionately as the ‘Fab Four’.

Of all the countries, the one with perhaps the most distinguished military issued timepieces would have to be Britain. At the height of Britain’s empire expansion and wars, some of the highest quality pieces were issued to the Army and the division that received the best of the best, was the Royal Air Force. It makes sense, after all, the wristwatch was a vital piece of equipment that was required not only for synchronisation but also for navigation. I have spoken to a few ex-RAF pilots who said that without their watch, they would’ve literally been lost in the sky. 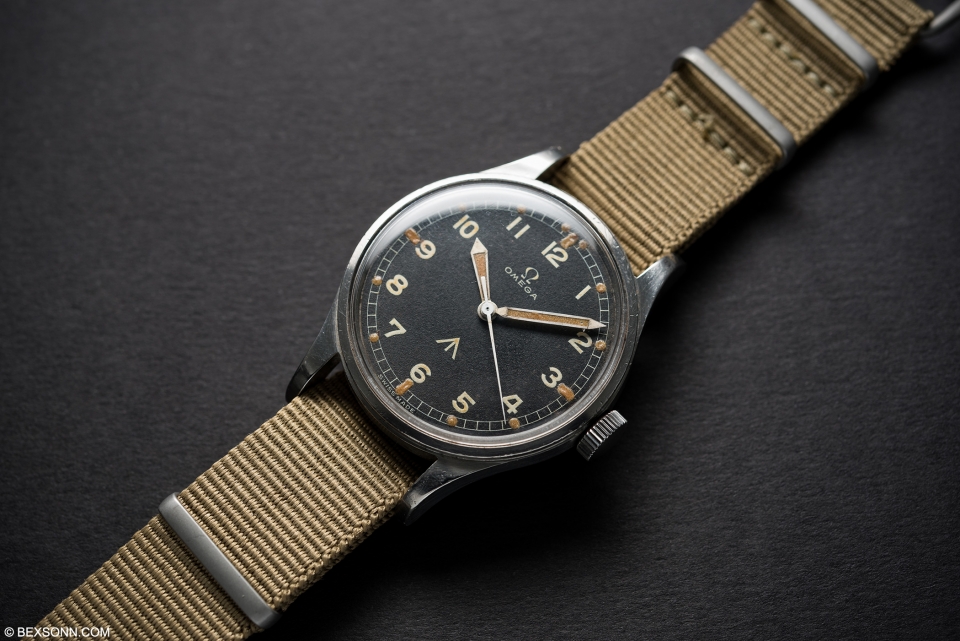 Some of the most collectible RAF watches came from the 40’s-60’s including the famed Mk 11 watches produced by Jaeger-LeCoultre and IWC, the Omega CK2777-1 issued in 1953 known as the Thin/Fat Arrows and of course (pictured above), the distinctive Lemania mono pusher chronographs issued in the 60’s. These were all incredibly complicated and high-quality pieces that had to follow strict military specifications and were powered by movements that kept incredible timing.

Interestingly, as the need for war died down and as military spending was reduced in the 70’s in Britain, the quality of watches produced consistently followed this as a consequence. This is where we see the introduction of the ‘Fab Four’ watches. In the early 70’s, the Ministry of Defence’s DEF-STAN (Defence Standardization) was altered in order to produce more commercially viable pieces for the military.

The result of this was the creation of watches over a decade by four brands – Hamilton, CWC, Newmark and Precista. Despite the change in specs, these watches followed the specifications of its predecessor, the Lemania Mono-pusher as it remained house in the 39mm asymmetric stainless-steel case and consisted of a black dial with luminous hands and markers. The change was that instead of one chronograph pusher, you now had two. As such, the movements that powered these pieces were not quite the quality of the 15TL in the Lemanias but instead the workhorse cam activated Valjoux 7733.

You might be thinking why one might be interested in pieces that are not comparable to its predecessors. Sure, the Lemanias will always be more coveted and expensive, but the Fab Four remain highly undervalued and for a fraction of the price you get a historically important military issued chronograph. Despite the more workhorse movement used, the quality of these are just as robust and, on the wrist, feels very solid.

Flip the watch over and you are greeted with military markings seen throughout all British issued pieces. With these examples going to auction on the weekend, three of the four pieces were issued to the Royal Air Force, denoted by the ‘6BB’ marking while the Hamilton was issued to the Royal Navy Fleet Air Arm, as denoted by the ‘0552’ marking. The 9243306 marking throughout all the watches indicated the military spec as denoted by the MoD and the bottom markings show the issue number followed by the year it was produced.

Between the four, the Hamilton and the CWC was issued throughout the 70’s, making them more common while the Newmark and Precista were only issued for one year in 1981 and 1982 respectively.

All four examples are in mint condition with correctly signed movements and case backs. The luminous material on all four of these have aged to a beautiful creamy patina. It is not often that you see all four brands for sale in one place, let alone in this condition, so it will be very interesting to see how high these goes. I would not be surprised if it sets a new benchmark for the value of the Fab Four but as it is now, these remain highly coveted and highly undervalued.

The Watches of Knightsbridge auction will take place on the 30th June 2018, make sure you visit the official website for this month’s full catalogue.