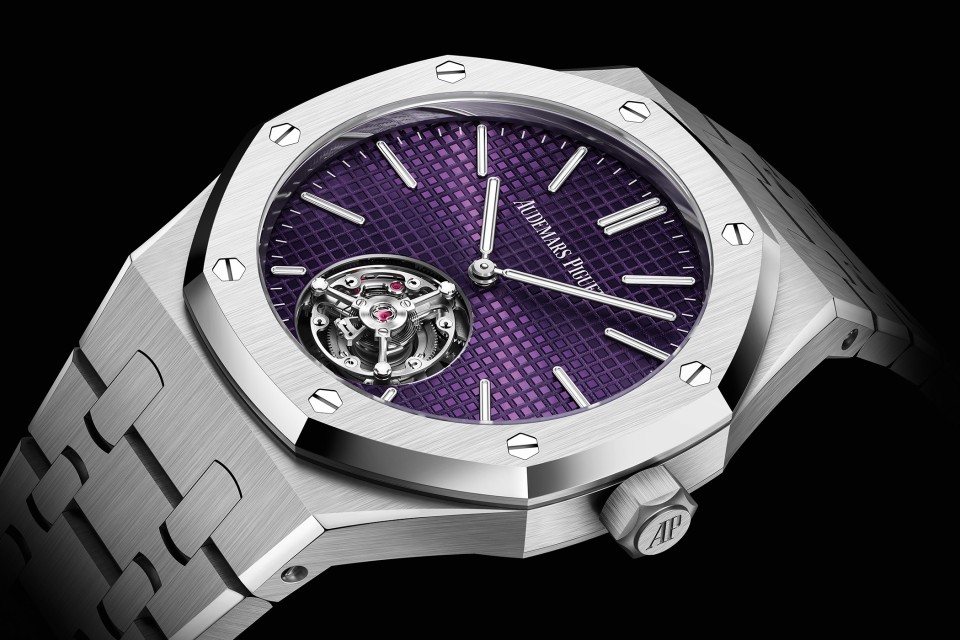 It doesn’t really come as surprise that AP have a way of translating their concepts into mainstream production pieces, and while this is a watch that many would’ve expected from the brand that is steeped in history when it comes to tourbillons seeing it in a smaller vessel is quite the feat. As we’ve previously stated, for better or worse, the Royal Oak will always be a staple of the AP collection but sometimes it’s nice to see some variations, even if it’s within the Royal Oak collection. Just a couple of weeks ago, Audemars Piguet unveiled its latest Royal Oak Self-winding Flying Tourbillon Extra-Thin (RD#3) model.

Towards the end of 2020, Audemars Piguet introduced the 41mm Royal Oak featuring a flying tourbillon, which is available in three different variants (my personal favourite being the titanium version). However, as you’ve probably noticed, AP were on a bit of a green dial vibe last year (as were many other brands), and so they decided to also release a green dial variant of their flying tourbillon. However, for 2022, Audemars Piguet have introduced a new 37mm RO Flying Tourbillon to complement the new 39mm RO Flying Tourbillon introduced earlier this year. 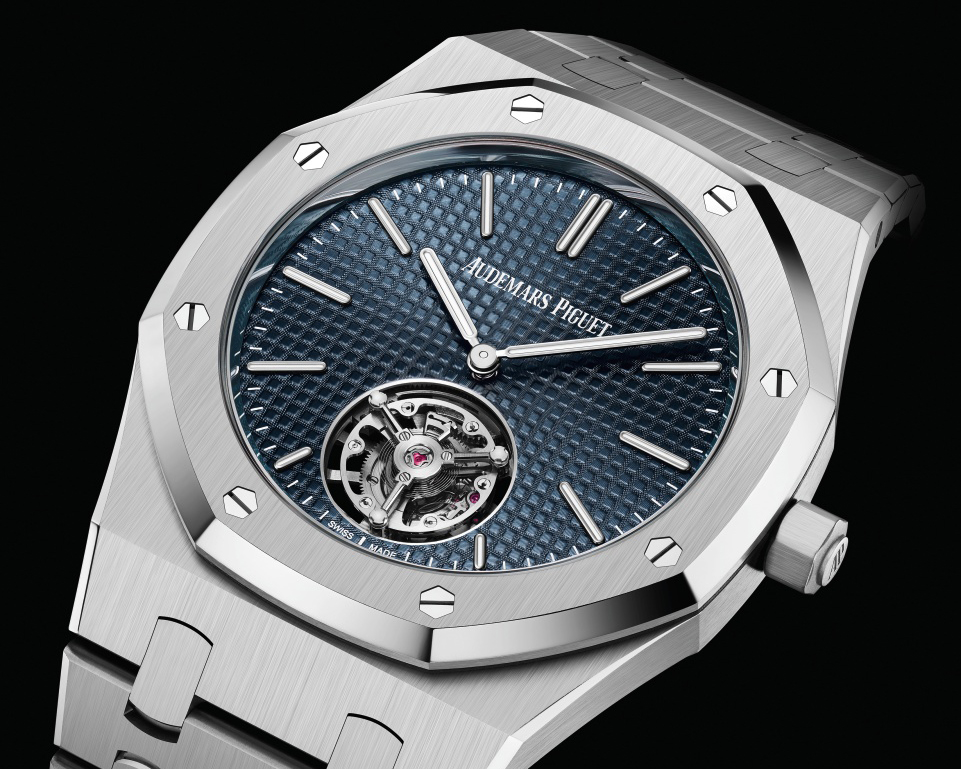 Audemars Piguet are no strangers when it comes to tourbillons and even tourbillons in Royal Oaks aren’t that recent either, with one first gracing the scenes back in 1997 as a 25th anniversary model. That said, this new RO flying tourbillon does toe the line of said 90s piece in a contemporary 37mm format. 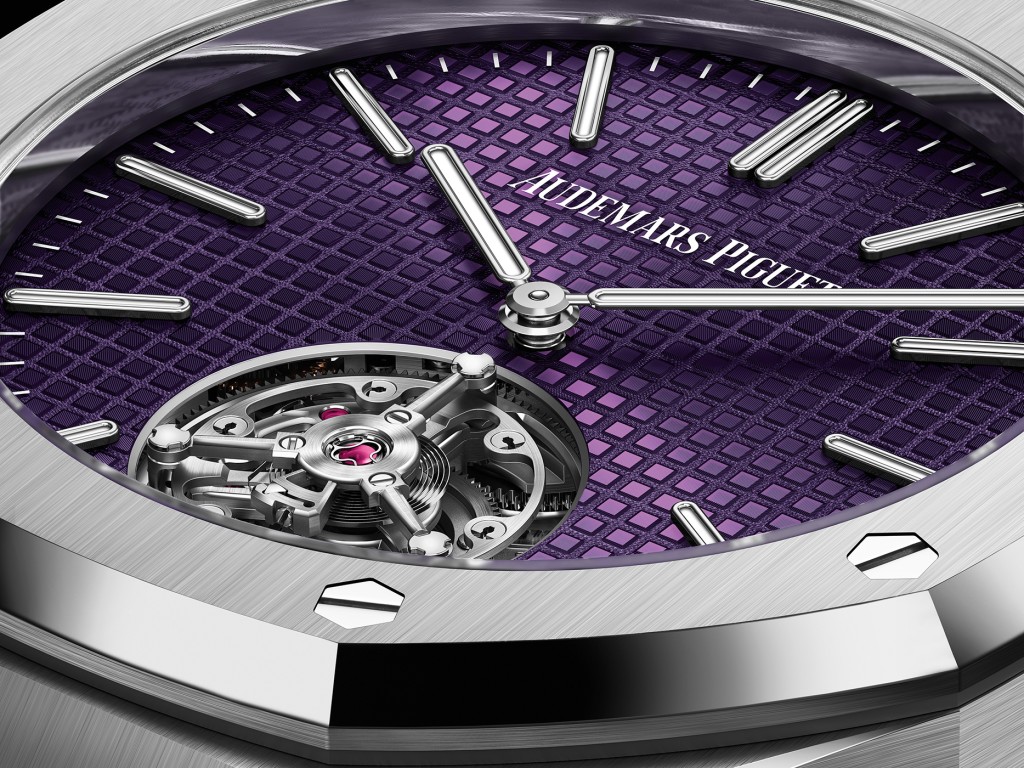 This new 37mm Audemars Piguet RO Flying Tourbillon features a familiar Royal Oak dial aesthetics. Although endowed with a smaller diameter, the second RD#3 version integrates the dial aesthetic codes of the “Jumbo” model released earlier this year. Similarly, to its 39 mm counterpart, the timepiece adorns a Petite Tapisserie dial, but presented for the first time in a vivid plum hue, obtained by Chemical Vapour Deposition (CVD) to guarantee a long-lasting hue across all dials. The brand’s name is proudly positioned below noon, with the 3-arm flying tourbillon cage proudly on display at 6 o’clock. 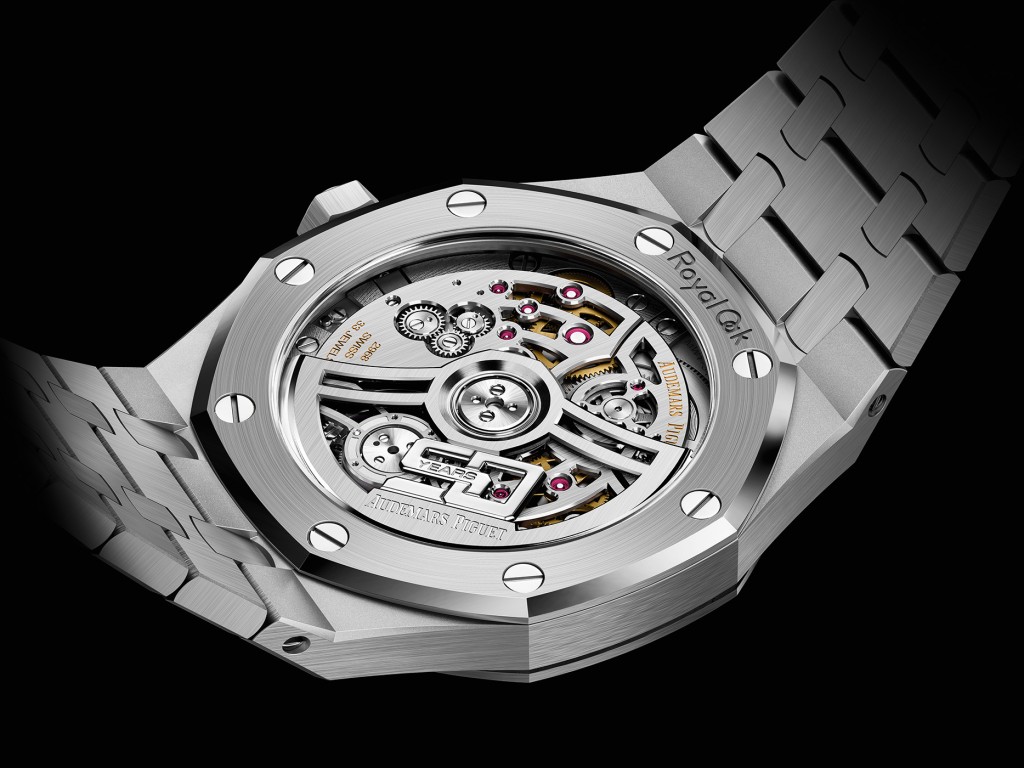 To get a flying tourbillon into a case this size, AP had to develop a new tourbillon movement. The 41mm Royal Oak Flying Tourbillon first released in 2020 was powered by the self-winding calibre 2950, which was important to note at the time that this calibre used was originally launched in the CODE 11.59 line – this movement measured 31.5mm x 6.24mm. As things go, flying tourbillons are kind of a flagship complication for AP and as such are a little more unique than others. Unlike a conventional tourbillon, a flying tourbillon eschews the upper bridge, affording views of the escapement, regulating organ and cage in motion. 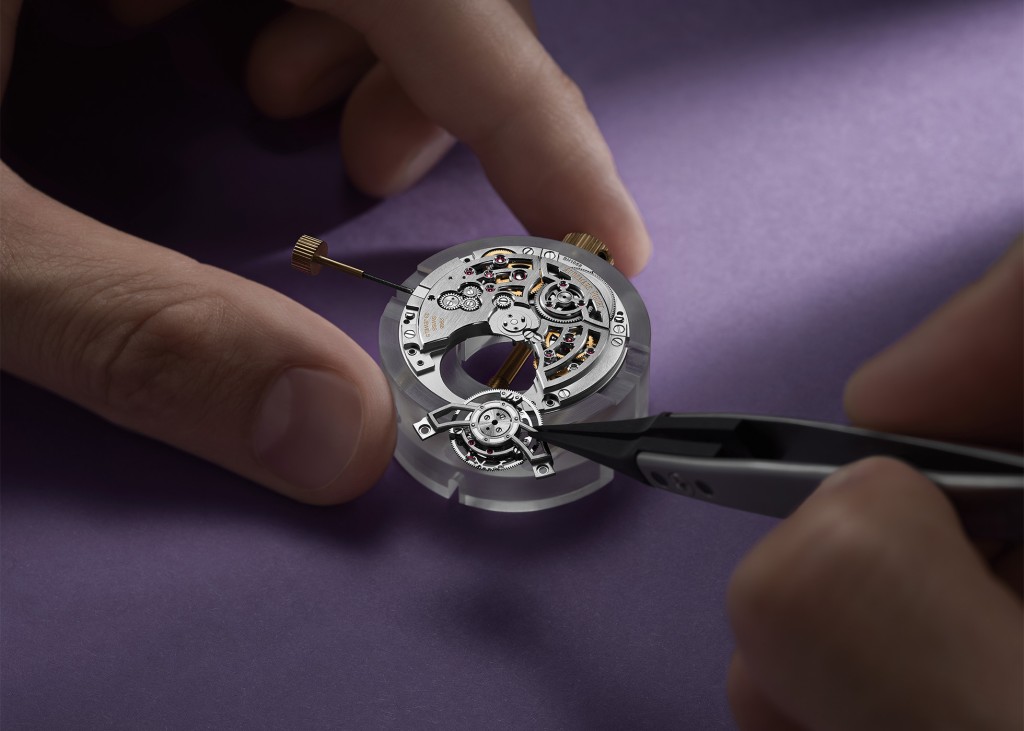 At the heart of this innovation is Calibre 2968, an ultra-thin self-winding flying tourbillon movement that was developed over a five-year period. Integrating a flying tourbillon powered by an innovative escapement in a case of 39 mm and then 37 mm in diameter represents the Manufacture’s main technical achievement as this complication was previously reserved for 41 mm diameters. Given the restricted space available, this self-winding flying tourbillon had to be creatively rethought to reduce its thickness, while retaining the initial proportions of its cage, leading to the repositioning of certain components. The tourbillon cage, which is crafted in titanium, is notably equipped for the first time with a peripheral drive, which also contributes to its thinness – measuring 29.6mm x 3.4mm, which is noticeably tinner than the calibre 2968. 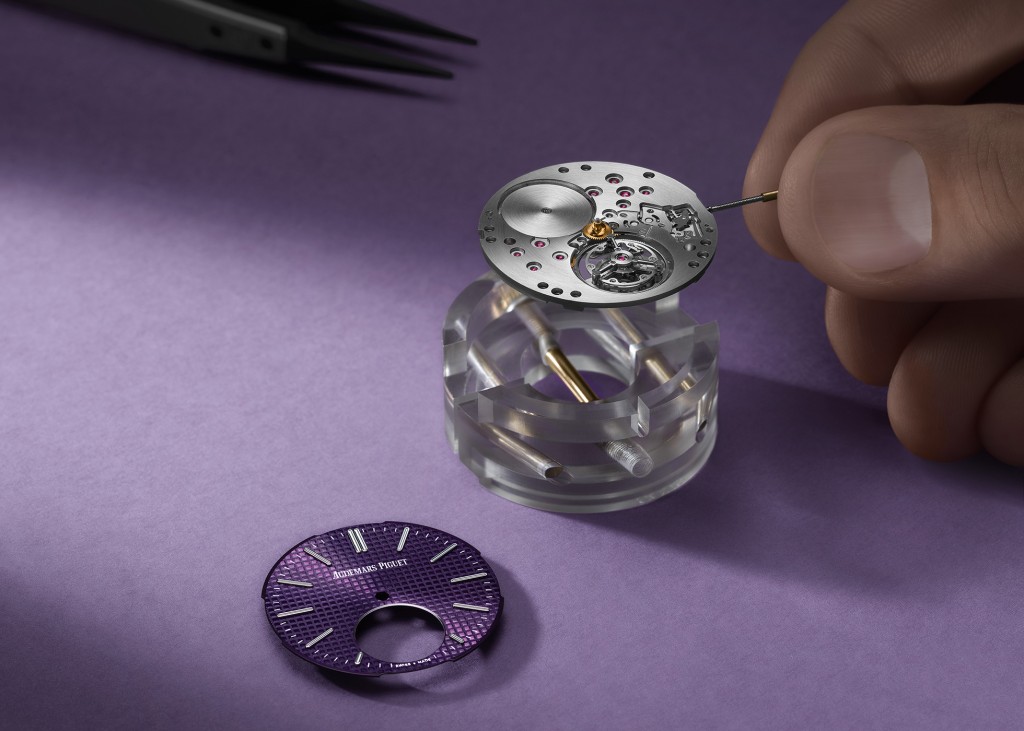 It perhaps goes without saying that the calibre 2968 embodies the distinctive features and extensive finishing techniques that define a luxury sports watch. Featuring a bidirectional rotor expertly engraved with the coat of arms for the Audemars and Piguet families, it is finished in true haute horlogerie standards with all edges and screw heads bevelled and polished and the familiar Côtes de Genève on the bridges. Of course, to make this visually impacting – Audemars Piguet have ensured the bridges have been openworked to unveil the movement’s inner workings, while achieving a harmonious and symmetrical aesthetic.

This AP Royal Oak Flying Tourbillon in stainless steel is expectedly excellent, measuring 37mm in diameter, with enough depth to accommodate a sapphire exhibition case back – allowing the wearer to admire the movement. The Genta designed case and bracelet of the Royal Oak is second to none, with a combination of brushed surfaces and polished bevels that showcases the par excellence of the manufacture. 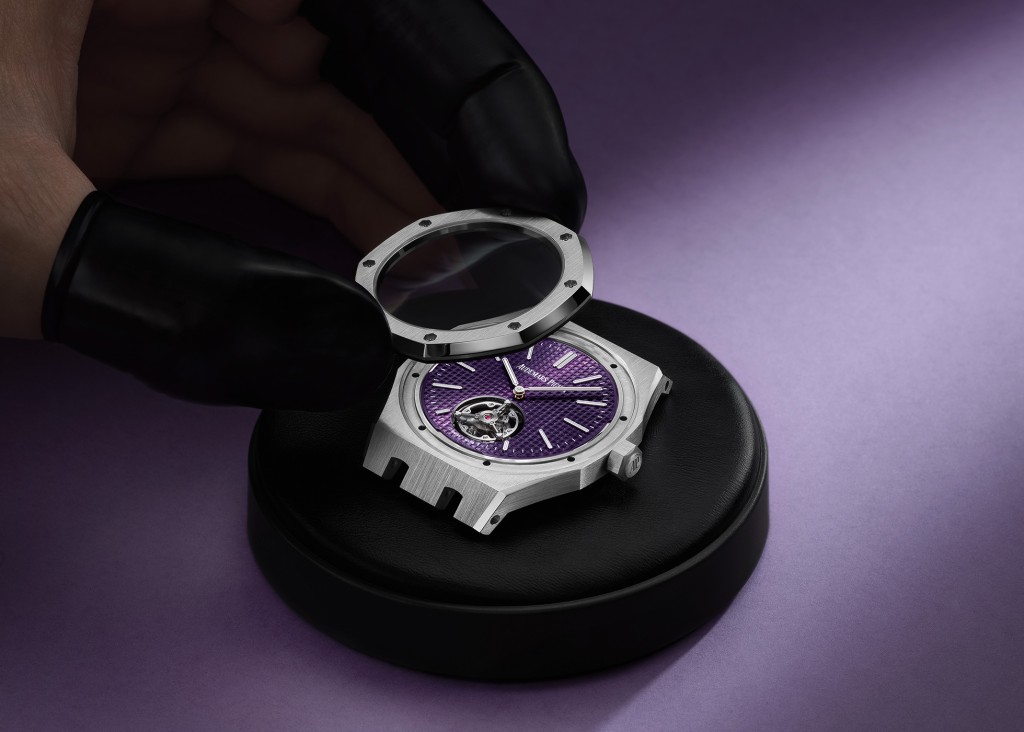 The Royal Oak is perhaps one of the most distinctive watches around. With its masculine octagonal shape, exposed screws, and integrated bracelet, it is easy to recognise from afar. The Royal Oak has an air of timelessness to it, which is by and large because of one defining factor: good design. Good design is timeless, but this new 37mm flying tourbillon does have a touch of the fancy-fancy that maybe breaks some rules, yet it still looks just as elegant.

The Royal Oak Self-Winding Flying Tourbillon 37mm RD#3 ref. 26660ST.OO.1356ST.01, is priced at CHF 165,400 and will only be available from AP Boutiques. For more information on this new piece, visit audemarspiguet.com.