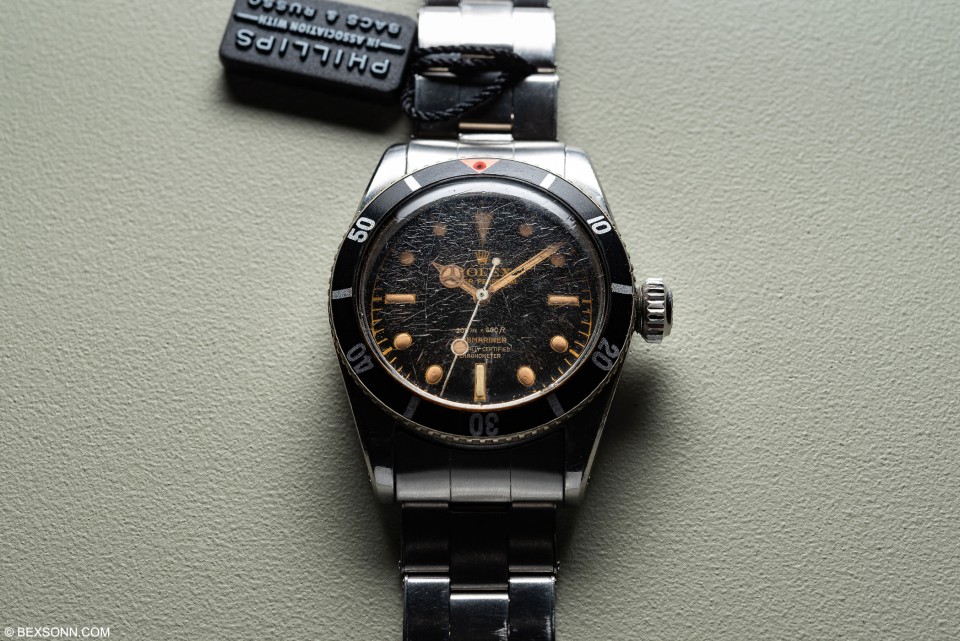 With the Geneva and Hong Kong auctions for Phillips wrapped up, December brings the final leg of the auction season with New York hosting perhaps the most interesting auction of the season. For the first time ever, a watch auction house, Phillips, is partnering with The Rake, an industry leading lifestyle magazine and Mr. Porter, the pioneering and highly successful online e-commerce fashion website.

Personally as someone who loves clothes nearly as much as watches, it is really exciting to see a collaboration like this. I’ve always been a fan of the Rake, drawing inspiration from their articles and also Mr. Porter, where I would subsequently empty my wallet after getting excited from reading about menswear.

The concept is that The Rake and Mr. Porter will curate a selection of tailored looks to be showcased alongside the exceptional watches that will be on offer by Phillips. This watch sale will be segmented in to categories of style and how watches play a role in completing each look. Anything from business to casual, to even specific events such as Goodwood and Wimbledon are addressed and this is something quite unique that has never been done in a watch auction before.

As usual, today I’ll be taking a look at some of the pieces that caught my eye. 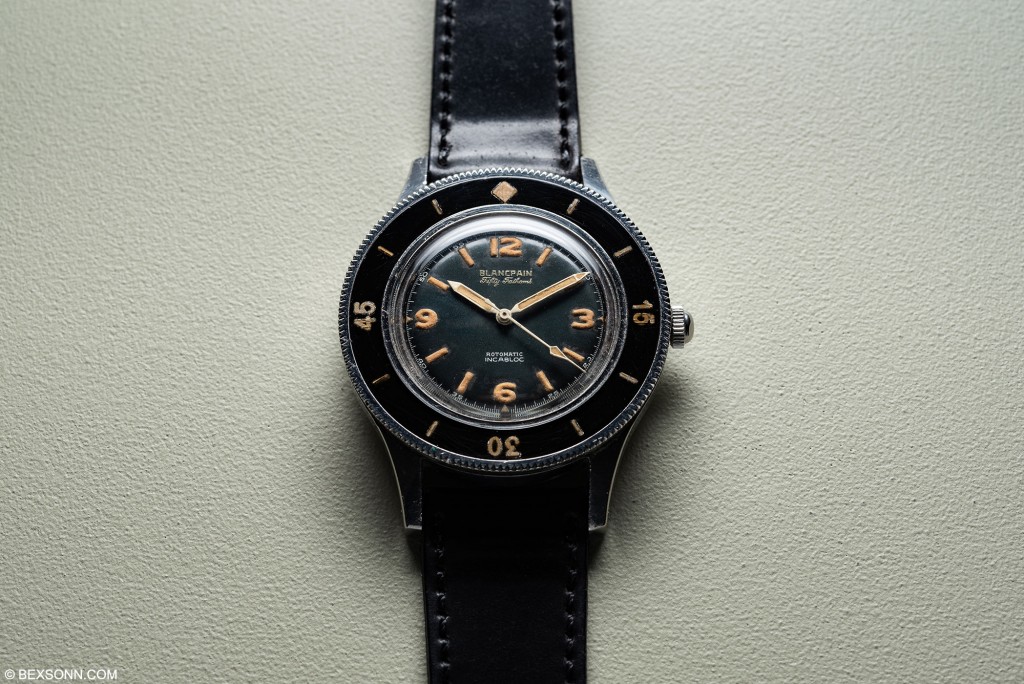 Lot 36: First of all, I’ve always been a Fifty Fathoms fan, and always will be. Something about the unmistakable Blancpain design language with that huge bakelite bezel and glossy black dial filled with lume made me fall in love with it all those years ago when I first got into watches. First released in the 1950’s, the Fifty Fathoms is one of the most iconic dive watches and sits alongside the Rolex Submariner, the Omega Seamaster 300 and the Jaeger LeCoultre Deep Sea Alarm as the most important dive watches ever produced.

Born out of a real need by military divers, it was issued to militaries all over the world, including the US Navy. It is a truly utilitarian piece and like all tool watches of the era, it is just downright good looking. 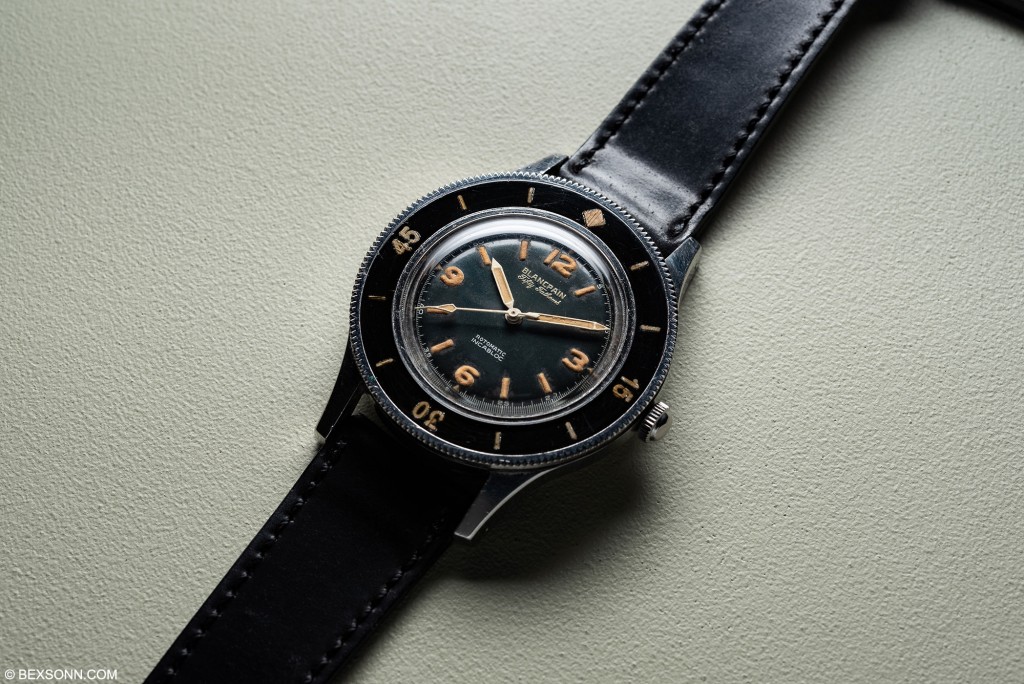 This example offered by Phillips, is a very early example and a very unusual and rare one. It features a ‘Luxor’ minute hand, where the tip of the minute hand is separated from the rest and resembles the obelisks of the Luxor Temples in Egypt. It is all about details with vintage pieces and the gilt writing of the logo and narrow ‘rotomatic’ text is affirmation that this is indeed one of the earliest Fifty Fathoms. To top things off, this piece is in excellent overall condition, including its bakelite bezel, which was prone to cracking overtime.

This would be a perfect weekend watch with a denim over shirt, distressed chinos and Chelsea boots. 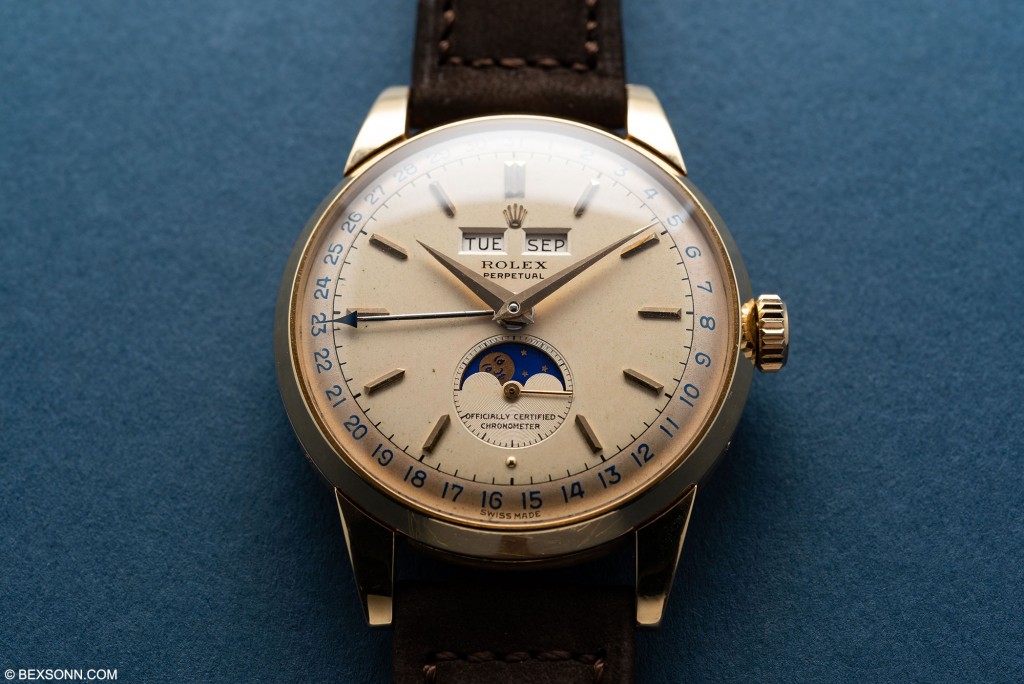 Lot 74: The Rolex Ref. 8171 was nicknamed ‘Padellone’, which translates to large frying pan by Italian collectors because well, apparently it resembles a large frying pan. Somehow, nicknames always sound more elegant in Italian than they do in English.

Anyway, the Padellone is widely considered by vintage collectors as one of the holy grails of Rolex collecting and in general one of the most sought after pieces ever. The reason being is that Rolex were entirely focused on producing tool watches during the era and to produce something that was something, dare I say, Patek dress watch-ish, was highly unusual. In fact, this alongside the Rolex Ref. 6062, another holy grail Rolex, was the only pieces offered by Rolex that had a moonphase and triple calendar function. Of course today, there is the Cellini line with moon phases but other than that, Rolex has never made anything else like it. This is a proper dress watch! 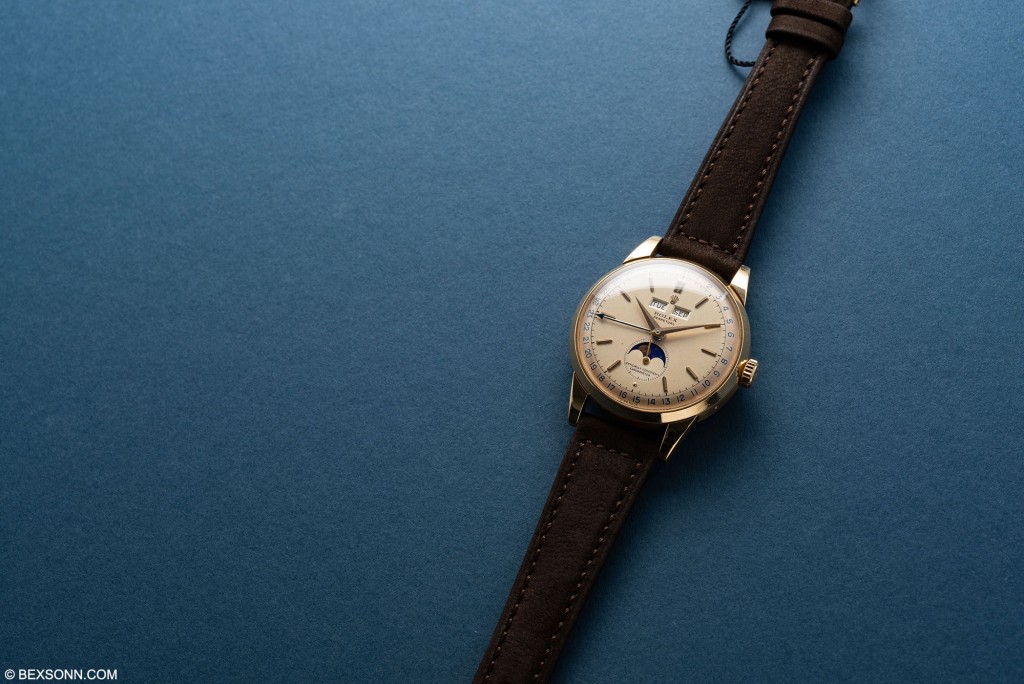 The Ref. 8171 is large at 38mm (I get the frying pan bit now), and this example comes in a very nice vintage condition. You can see the dial has aged nicely and that the case is immensely well-preserved with its caseback number and Rolex crown still visible. A great dress watch with an unusual aspect to it, a gold triple calendar moonphase watch certainly calls for a suit – and in my opinion a lighter tone suit in a brown/beige shade would suit the warm yellow gold and brown strap perfectly. This piece is fresh to the market and I expect it to fly. 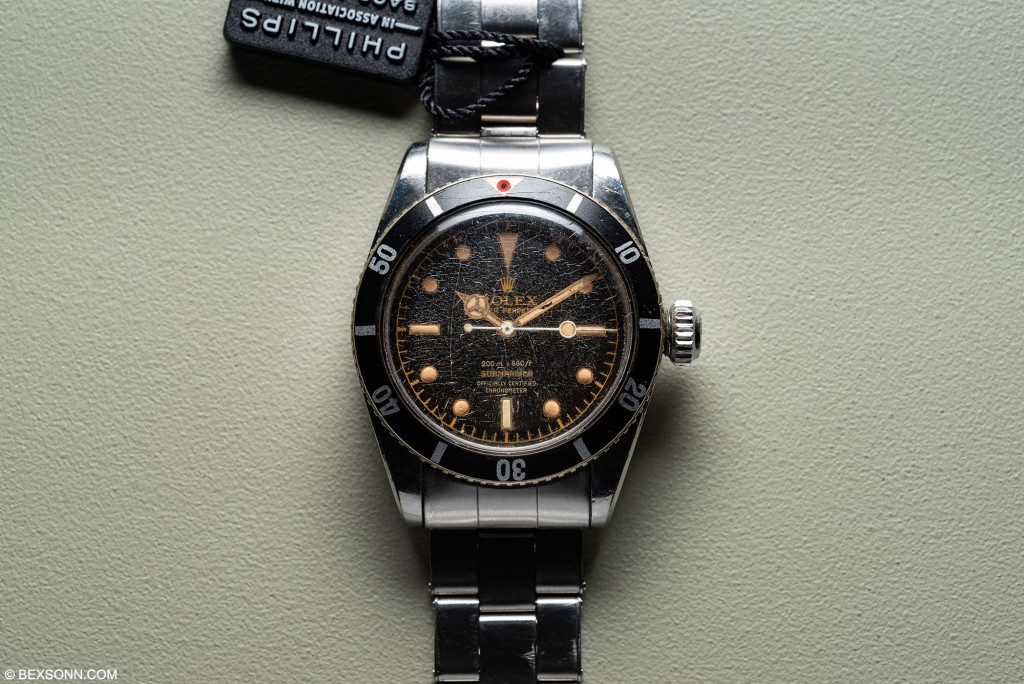 Lot 77: The Big Crown is having its time in the limelight currently. As you may or may not know, Tudor also made Big Crown variants of their Submariner and most recently, a nice example went for around 160,000 USD. This is crazy for vintage Tudor, and of course, they have always been seen as the younger brother of Rolex. So, can you imagine what might happen if the Rolex version, in pristine condition comes to market? 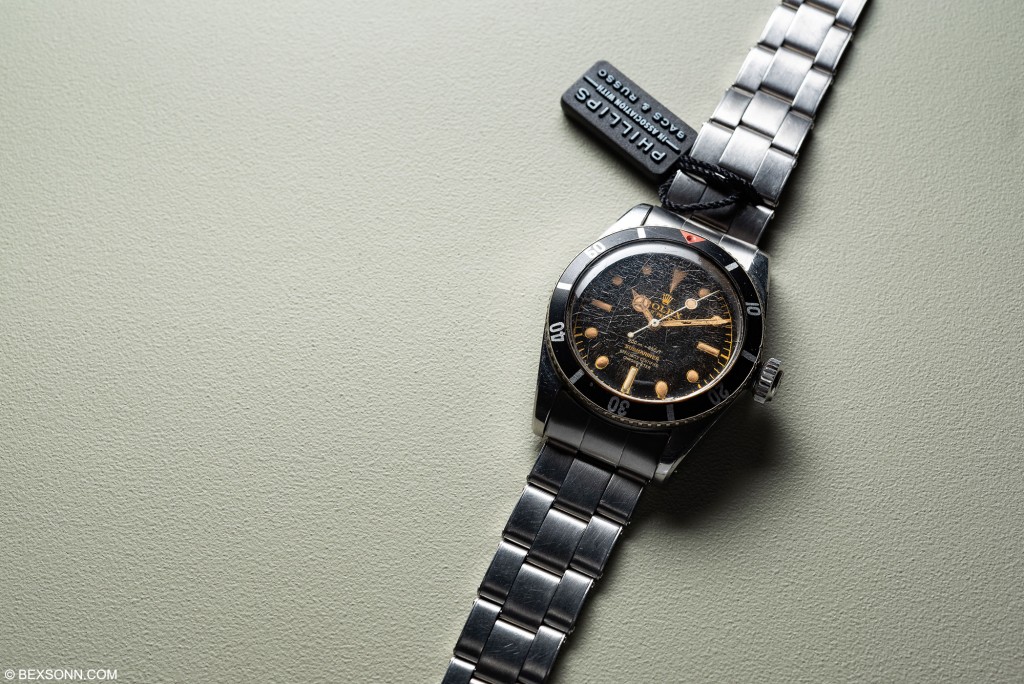 First launched in 1955, the Ref. 6538 was made in small quantities and was produced only for four years. It was early times for the Rolex Submariner, and it set the tone for what is undisputedly the most popular watch model today. Furthermore, the Ref. 6538 gets extra brownie points for being the watch of choice for Sean Connery when he was James Bond, featuring in Dr. No, Goldfinger and From Russia With Love. Called the ‘Big Crown’ because of its unusually large 8mm crown, the Ref. 6538 is instantly recognisable from its lack of crown guards. 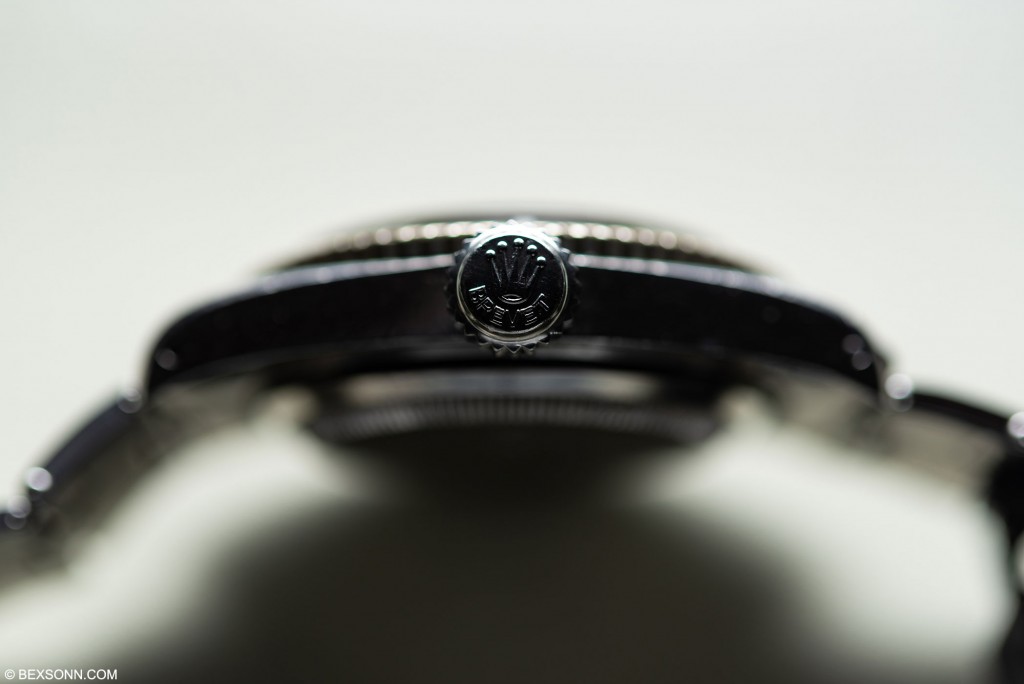 This example, as expected from Phillips, is fresh to the market and in exceptional condition. It is unpolished and has its strong bevelled lugs incredibly well-preserved. It has its original domed crystal and underneath it, a pristine glossy gilt dial with perfect radium lume. To top things off, this watch comes as a full set (!), including its box, guarantee and even chronometer rating, which is insane for a watch this old! 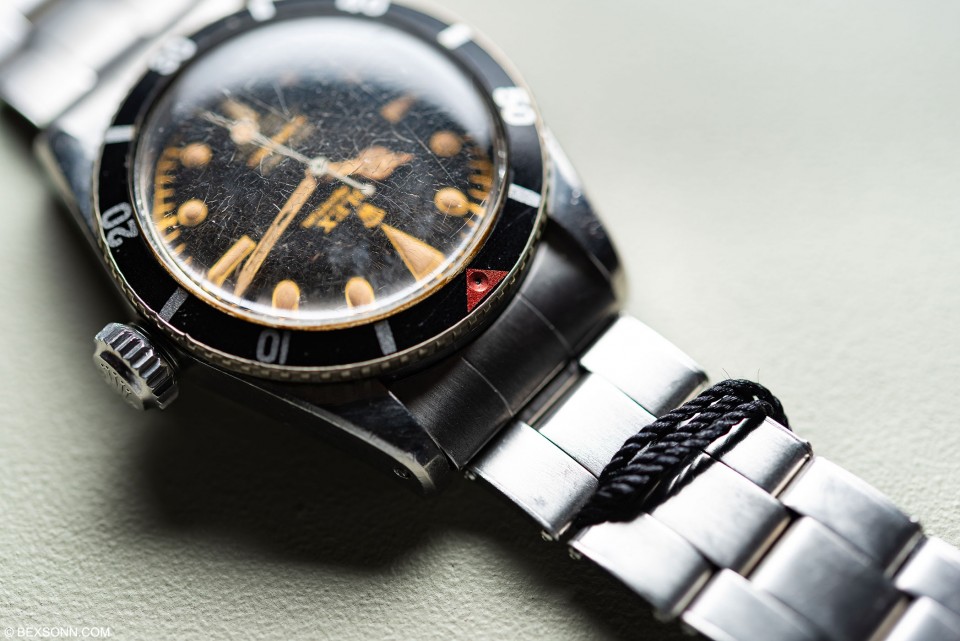 As with all Submariners, it is an incredibly versatile piece that can go with any outfit, but if given the choice, I would be pairing it with something rugged and distressed, highlighting that it is indeed, the most perfect tool watch ever created. 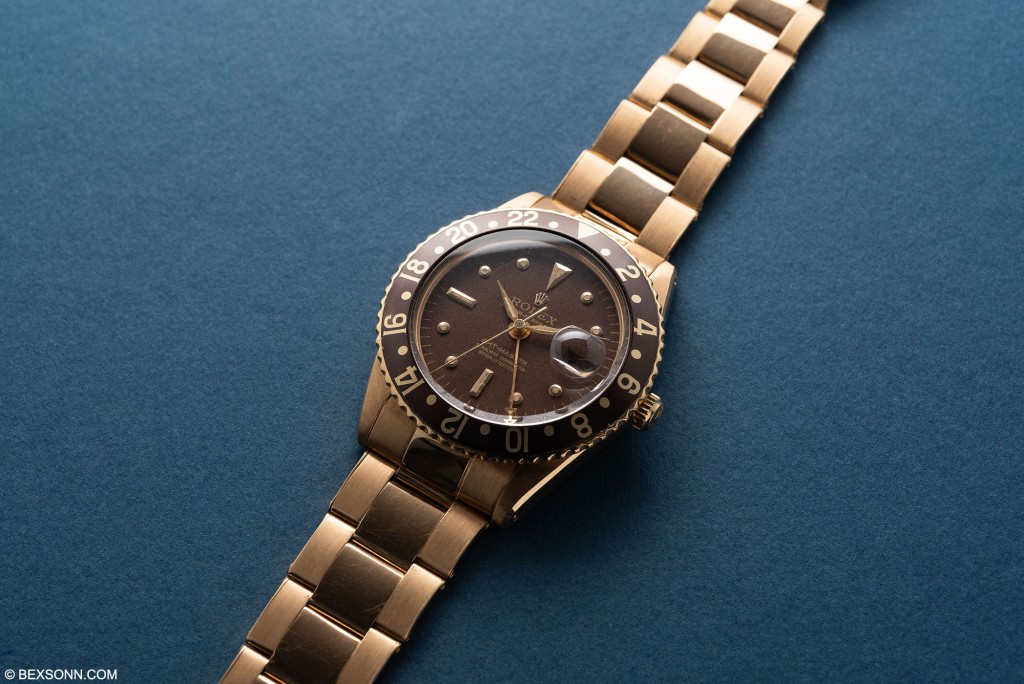 Lot 94: The Rolex GMT-Master, up till today, is one of the staples in the Rolex lineup and next to Submariner and Daytona, sits on top of the Rolex food chain. These two time zone watches, with its rotatable bezel was created in conjunction with Pan American Airlines and made for pilots in the 1950’s as air travel was being popularised. 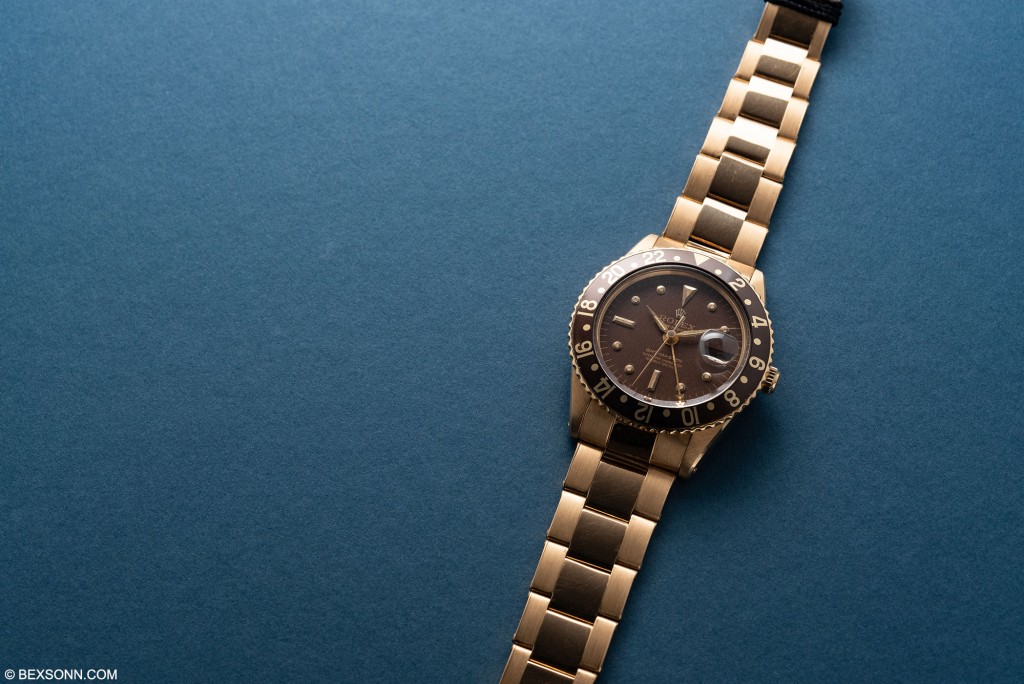 While they were predominantly made in steel, Rolex also made a yellow gold variant in much smaller quantities and what is being offered by Phillips is a rare transitional mode. The Ref. 6542 was the first GMT-Master introduced and it featured a Bakelite bezel, which was highly brittle and a case without crown guards. As they improved upon this with the 1675, now with an aluminium bezel and crown guards to protect the watch, this was only with the steel models while the 1675’s in yellow gold got the bezel upgrade without the crown guards. It wasn’t for a few years before Rolex incorporated crown guards into the yellow gold 1675’s and the example you see here is a rare transitional version. Furthermore, it features gold leaf hands and is hardly worn. It comes as a full set, with its box and guarantee, and is impressively preserved.

A yellow gold GMT-Master is one of the most versatile watches and it works just as well with a linen suit as it would with shorts and a T-shirt. Not to mention, the two time zone feature is in my opinion, one of the most relevant and useful complications in a watch today. 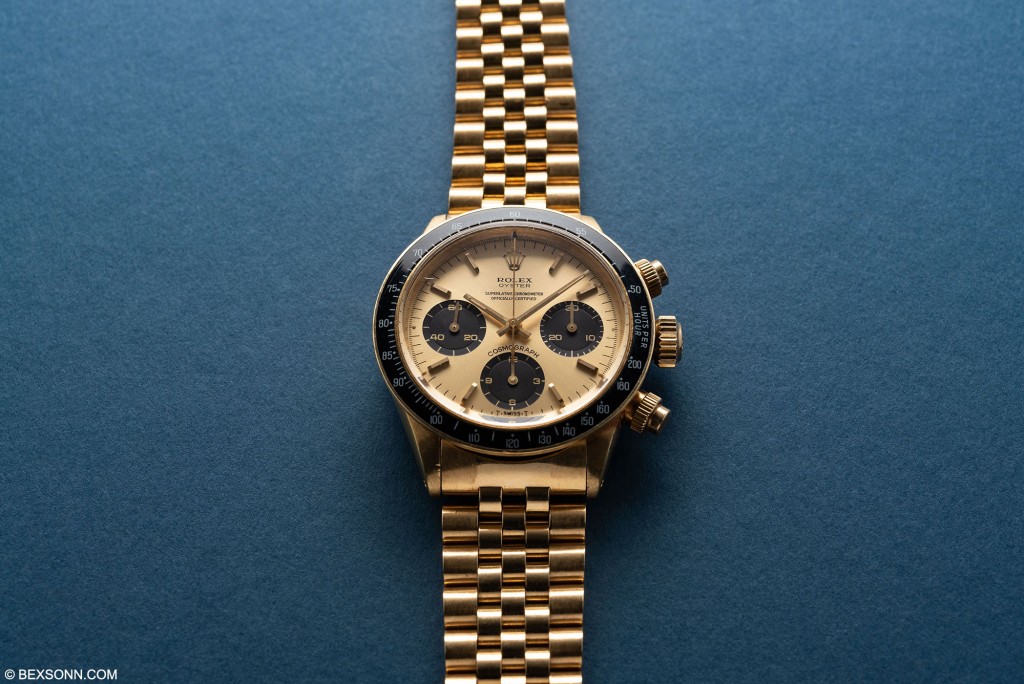 Lot 120: If you know anything about vintage Rolex Daytona, you will know two things. One, they are insanely expensively and two, it is always about the most minute details that can make a watch a few hundred thousand dollars or a few million.

The Rolex Daytona has been the holy grail of vintage watches for a long time now, and with such strong branding from Rolex and its iconic status from being worn by all kinds of famous people, it is easy to see why. Furthermore, the Daytona as a chronograph is just such a proportionality perfect and attractive watch. 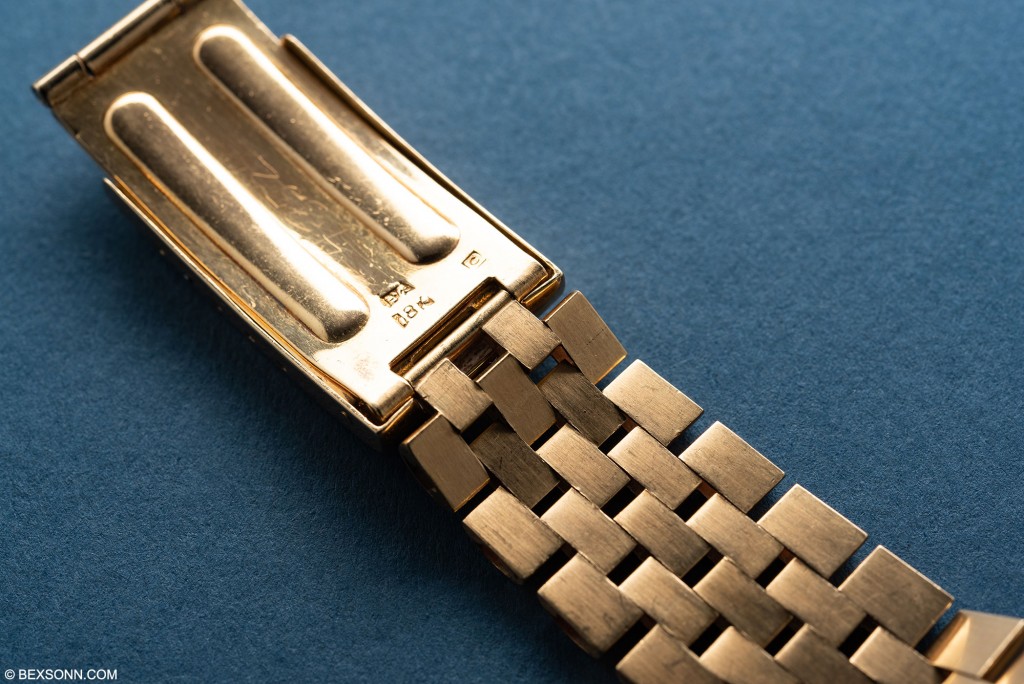 This example being offered by Phillips highlights what I said about details. The Ref. 6263 was introduced in 1969 and featured a new Oyster case with screw down pushers and later on a chronometer rating. This present example is one of the rarest variants of the 6263 as it is firstly in yellow gold, where most were made in steel. Moreover, this features a dial that displays the chronometer rating beneath the Rolex Oyster text, which gives way to its nickname the ‘Oyster-Split’. 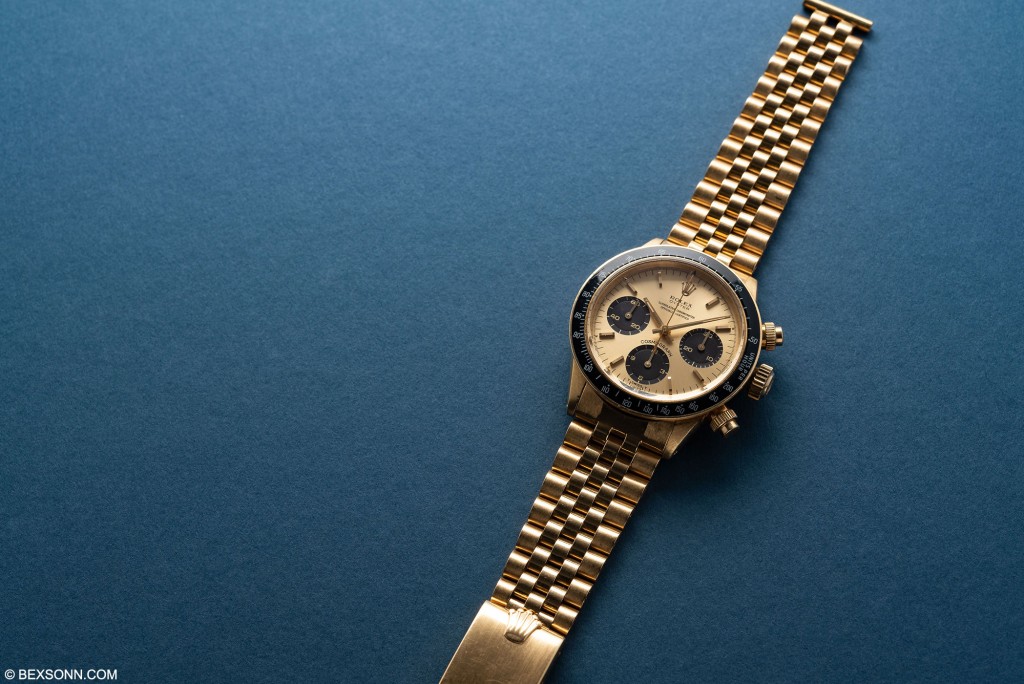 It is the earliest known yellow gold 6263 with a chronometer rating printed on the dial and as a result, it is one of the most desirable. It comes in nice original condition, including its original Mk 1 pushers and its estimate of $80,000 – $120,000 seems conservative. Just like most Rolexes, these Daytonas are extremely versatile pieces and in yellow gold? Gangster.

I would opt for a more casual approach to this Yellow Gold Daytona as I think that the warm gold tones, usually reserved for dress watches, contrasting with its sporty overall look will work well with anything casual. It’s certainly not conventional, but the shock factor of the juxtaposing elements is something that I’ve been loving lately.

While I am a huge watch fan, I have always thought of it as  just one component of how I see myself. I think a watch should be complemented with an equally impressive and curated wardrobe on the whole is always more than the sum of its parts. Here is an example, would you rather a man in a finely tailored suit, displaying sprezaturra with a vintage Omega Seamaster dress watch, or someone in cargo shorts and a pink polo wearing a Rolex Paul Newman Oyster Sotto Daytona? You get the drift.

It’s never really been about what you wear but instead how you wear it that makes an impression and with this new style of auction by Phillips, The Rake and Mr Porter, it is certainly an interesting take on how we view vintage watches and something that I welcome.

For more lot information on The Phillips STYLED. Timeless Watches & How to Wear Them Auction that will take place on the weekend of the 5th of December at 450 Park Avenue, New York visit the official Phillips Watches website to view the entire catalogue.