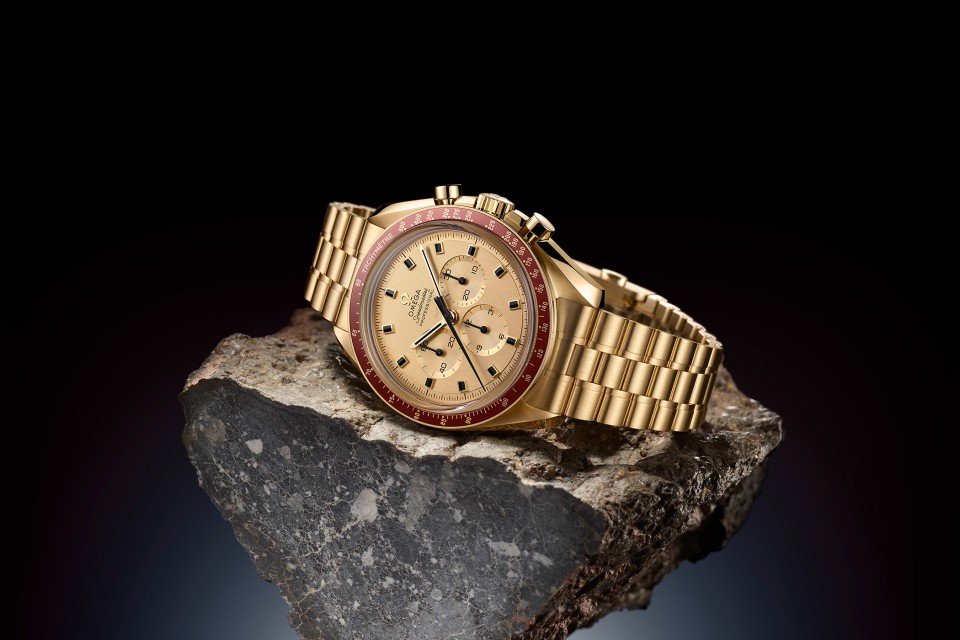 For many of you who may not be aware the Speedmaster is NASA’s first choice of wrist wear when conducting space shuttle missions.  One of the most important space flights was the Apollo XI mission, this was because in July 1969 astronauts Neil Armstrong and Buzz Aldrin stepped onto the Moon for the first time, creating history. Strapped around Buzz Aldrin’s spacesuit as he leapt onto the Moon was an Omega Speedmaster Professional. Since this lunar landing, Omega have celebrated with anniversary editions to commemorate the occasion every 5 years since the 1980s and this year, Omega have unveiled the 50th anniversary limited edition.

As a tribute to the success of the Apollo 11 mission, a special “Astronaut Appreciation Dinner” was held on the 25th November 1969, in Houston, Texas, in tribute to the moon landing heroes. More importantly though, it was at this dinner that Omega presented a very special Speedmaster to the astronauts in NASA’s space program. The watch in question was a Speedmaster BA145.022; crafted from 18-carat yellow-gold, with a burgundy bezel, as well as an inscription on the caseback that read – “to mark man’s conquest of space with time, through time, on time.” This Speedmaster ref. BA145.022 housed the camshaft chronograph calibre 861 and was Omega’s very first commemorative numbered edition, with only 1,014 models being produced from 1969 to 1973.

To mark the golden jubilee of the first moon landing, Omega have produced a new Limited Edition Speedmaster of 1,014 pieces. Taking design cues of the Speedmaster BA145.022, this new chronograph has been crafted from an exclusive new 18-carat gold alloy and is powered by a brand new manual-winding Master Chronometer calibre 3861.

The case, bracelet, dial, hour-markers and hour-minute hands have all been crafted from Omega’s new 18-carat gold alloy, dubbed Moonshine gold. This gold alloy is paler in hue than traditional 18-carat yellow gold. Moreover, it is said to offer high resistance to the fading of colour and lustre over time. Furthermore, the bracelet Omega have adorned this new limited edition Speedmaster with is reminiscent to that of the one originally fitted to the BA145.022.

Staying true to the BA145.022, Omega has included a burgundy bezel ring, though fashioned out of ceramic [ZrO2], with its tachymeter scale in Ceragold. The scale, like the original, is graduated to 500 units per hour, and also features a marker dot above 90 (aka DON bezel), which aficionados alike will appreciate. Another aspect collectors will appreciate is the use of a solid gold [Au750] vertically brushed dial, which has been adorned with facetted black onyx, set in gold, as well as the hour and minute hands filled with black varnish and the black varnished central chronograph seconds and register hands.

The outer case back is a rather intriguing affair, featuring engraving, which display the limited edition numbering among other things, but it is the inner decorative ring that really grabs your attention. This blue inner section features a partial world map of the American continents (in polished finish), opposite a domed lunar meteorite inlay representing the moon. This inner ring also includes the wording – “APOLLO 11 – 50th ANNIVERSARY” and “THE FIRST WATCH WORN ON THE MOON” in gold.

In true Omega fashion, not forgetting any little details, this 50th anniversary gold Speedmaster features vintage Omega logos on the dial, crown and bracelet clasp. And if that wasn’t enough, Omega have created a unique presentation box for each piece. Inspired by the original packaging of the BA145.022 model from 1969, Omega has created a new crater box that will house each Limited Edition timepiece, and because of the unique structure of the box panels, no two crater boxes will be alike.