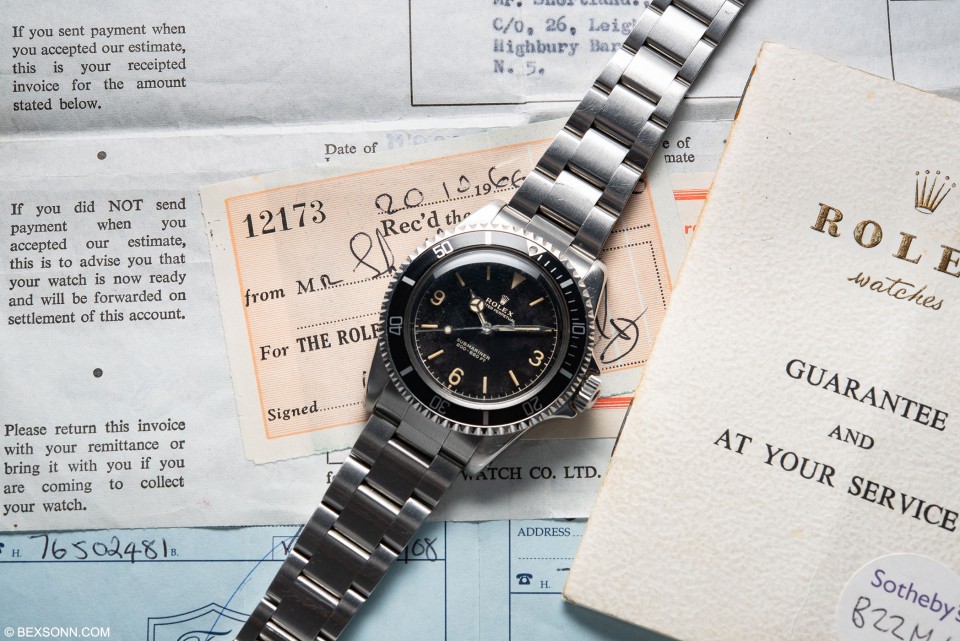 Auction season is on the horizon and of course that means London is one of the first destinations of the year where watch auctions will be held. The last auction to be held by Sotheby’s in London was last September and we highlighted some rather intriguing lots. As mentioned before, Sotheby’s are a well-seasoned auction house when it comes to selling watches. Over the many years in doing so, they’ve set some enviable records along the way. And as testament to this, last November they set a new record for the most expensive Patek Philippe ref. 2499 ever sold at auction – a rather enviable feat. As also mentioned, there has been a bit of a staff shuffle at Sotheby’s, with Sam Hines, once of Bacs & Russo in Association with Phillips, now Senior Director and Head of Watches Worldwide for Sotheby’s and the gentleman who brought the gavel down on the new world record just mentioned. During our visit to their London offices we sat down with the lovely Kate Lacey to look at some of the lots coming up for sale in their April London auction.

Lot 76: The Rolex Explorer 1016 has always been the Rolex sports watch that has somehow sailed under the radar, in comparison to the brands big hitters; such as the Submariner, GMT and Daytona. The no nonsense of the 3-6-9 p dial perhaps lends to its more simplistic nature and by virtue probably makes it more underrated and underappreciated. That said, it is likely the reason why it remained hardly unchanged for nearly 30 years. As you’ll likely know from my in-depth article on the 1016, I am a massive fan of the Explorer and while this ref. 1016 to the layman is nothing particularly special, those who love the way nature patinates certain watch dials, will love this.

This circa 1964 Rolex Explorer ref. 1016 has a matte black dial with applied luminous markers, 3-6-9 Arabic numerals and Mercedes hands. However, as mentioned, the dial has patinated to a dark chocolate hue. But you’ll notice the patina gradually fades in from 9 o’clock. Perhaps the only thing that slightly lets it down a bit is the missing tritium lume from the hour and minute hands, but this adds to the overall allure. Inside this Explorer ref 1016 is the 26-jewelled automatic calibre 1560 movement, signed Montres Rolex S.A. The case is in good condition and comes on a brown leather strap that matches the dial.

Lot 80: As the successor to the first GMT-Master reference 6542, reference 1675 was launched in 1960 using a metallic bezel insert that replaced the fragile Bakelite bezels used in the 6542 models. This example from circa 1960 features a glossy dial with gilt text and chapter-ring, with markers that have aged gracefully to a warm creamy tone. The dial reads “Superlative Chronometer Officially Certified” (COSC), though not as rare as those with OCC dials, it still displays charming qualities. Such as the striking tropical patinated dial that has discoloured, turning the dial to a warm inviting brown over time. Furthermore, it sports a small GMT hand – another feature of the early GMT production.

The bezel has faded to an even, light shade of blue and red and features nice “fat font” numbers, and the case has great definition in the lugs too. The early case features coveted pointed crown guards known as “Cornino” – making them truly collectible in the world of vintage Rolex. It also features a ‘Swiss” only dial, meaning the dial has radium as luminescent material. Another trait of this early GMT is the small luminescent dot above the 6 o’clock index. Known in the collectors circles as exclamation point dials, which were produced during a short period from 1960-63, making it more desirable amongst aficionados. However, it is believed that this trait signified lower radioactivity of the luminescent material on the dial.

Lot 82: There is no denying that the Submariner is the ultimate tool watch and while we’ve looked at quite a few there are some varying combinations and this particular variation is one of the most coveted by collectors and Rolex aficionados. You see, this Submariner 5513 features what is known as the 3-6-9 dial, which was one of the options given to the original purchaser of a Submariner when ordering. These dials are also referred to as Explorer-style dials for obvious reasons. Very few Submariner references were fitted with these 3-6-9 dials i.e. the 6538, 6200, 5510 and of course the 5513.

This present 5513 dates to circa 1962, when this reference was first introduced but of course this isn’t your run-of-the-mill 5513, which makes it highly coveted. You’ll notice the depth rating is somewhat different to the standard meters first. You’ll notice the M is absent and FT (feet) is written in different font. Moreover, like the 1675 above, this 5513 also makes use of an exclamation point at 6 o’clock. Furthermore, it features another trait of early 5513 Submariners from this period; pointed crown guards – yet another detail the aficionados will appreciate. However, an original bezel would’ve made this lot an absolute dream but I’m sure a period-correct one can be sourced, though expect to pay a premium for one.

In addition to the above, this lot is accompanied by its original guarantee stamped by Watches of Switzerland, as well as numerous receipts from the day of purchase and service receipts. And if that wasn’t enough, the watch has been kept in the family of the original owner and is fresh to the market.

Okay, not often do we (I) highlight contemporary watches that are coming up for auction, unless it’s a seriously rare independent timepiece or a piece unique but this one is perhaps the exception. Not many modern watches are instantly seen as legendary by collectors, this status only tends to be awarded over a number of decades. However, the Daytona Rainbow, which was first introduced in 2012 in yellow-gold and later in white-gold were bestowed with this title.

At Baselworld 2018, Rolex introduced the Everose (pink-gold) version, which was instantly welcomed and created the perfect backdrop to the rainbow sapphire-set bezel. Moreover, this new pink-gold iteration introduced the baguette rainbow indices, as opposed to the simpler diamond-set indices of the previous two. Most of these rainbow Daytonas tend to come with gloss black dials, however, this present lot has been fitted with the rarer pavé diamond-set dial.

Only a handful of these pieces are made each year by Rolex due to the complex nature in sourcing the perfect sapphires of the right colour to create this piece and this has inherently created supply and demand problem. And while this Daytona Rainbow may at first seem rather loud, it’s just so damn cool, hence the demand and this full-set Rainbow Daytona is in excellent condition and is said to be the first of its kind to appear at auction.

For more lot information on The Sotheby’s London Important Watches Auction that will take place on the 16th April at their London HQ, visit the official Sotheby’s website to view the entire catalogue.