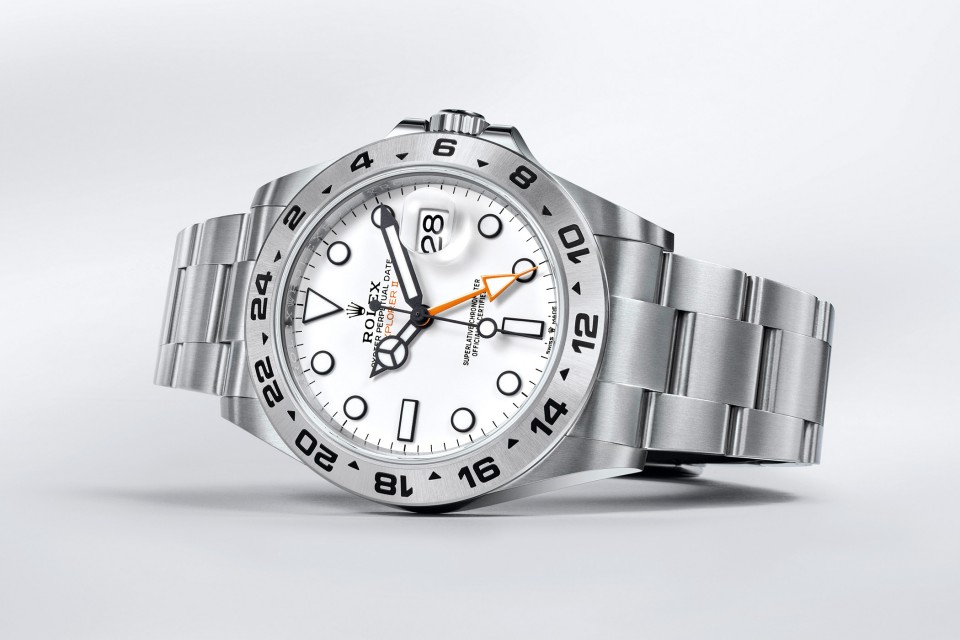 Rolex always like to improve upon what has come before and if I’m honest, it’s been a little while since the Explorer II has seen an upgrade, however, this year being it’s 50th anniversary since it was first introduce in 1971 – Rolex thought they’d mark the occasion with somewhat of an upgrade to the Explorer II. Though, it perhaps may not be the update many had been waiting for…

The Rolex Explorer II is a rather peculiar watch to most but Rolex being Rolex don’t just make wristwatches for the sake of making watches. While it may have very little use to most of us it is still iconic. Introduced in 1971, the Explorer II was launched as an Explorer with an additional function – hence the II. Aimed at speleologist (cave explorers), who worked in the dark for the majority of the time, it is said that they could easily lose track of time and become a little discombobulated, which is the reason Rolex introduced this piece. So, as you’ll notice what may actually look like a nice large orange hand for tracking a second time zone, is in fact a day/night indicator, with a bezel marked with a 24-hour scale.

This 2021 Rolex Explorer II hasn’t seen much in the way of changes to its exterior, it still maintains the same white lacquer dial, the hour markers – whose black coating is applied using PVD and the black lacquer hour, minute and seconds hands stand out for their matt finish. The 24-hour hand retains its characteristic orange hue, which is the same colour as the Explorer II inscription – a feature we’ve seen since 2011.

The case retains it 42 mm Oyster case of the new- generation Explorer II is guaranteed waterproof to a depth of 100 metres (330 feet). Its middle case is crafted from a solid block of Oystersteel, a particularly corrosion-resistant alloy. With the Explorer II not being a professional diving instrument, it features Rolex Twinlock winding crown, fitted with a double waterproofness system and protected by an integral crown guard, screws down securely against the case.

This new Explorer II is equipped with the in-house self-winding calibre 3285, a movement we first saw in 2018, and like all of Rolex movements, is chronometer certified and boast a power reserve of 70 hours. The calibre 3285 makes use of a blue Parachrom hairspring patented and manufactured by Rolex in an exclusive alloy, as well as a Chronergy escapement, which offers greater resistance to magnetic fields, inherently making it more accurate. As you may be well aware by now, all current Rolex movements are COSC certified but Rolex themselves carry out further testing with the movements cased and simulate daily wear, with even stricter tolerances, making sure deviation is no more than +/- 2 seconds per day. However, as I mentioned before, it would be interesting to see if Rolex ever develop their own certification as other watch brands have done over the years?

Keeping all this Explorer II goodness fixed to your wrist is the Oyster bracelet that is equipped with a Rolex-designed and patented Oysterlock folding safety clasp, which prevents accidental opening. It also features Rolex Easylink comfort extension link, developed by the brand, which allows the wearer to easily adjust the bracelet length by approximately 5 mm.

Briefly observing the new Explorer II there is no noticeable external difference, which may perhaps come as a bit of a surprise to some – us included. It would’ve been nice to see a different style of bezel on this new Explorer II, something more akin to the first generation reference 1655, this would’ve differentiated it from the previous version. Though it’s hard to see if there have been much in the way of changes to the cases dimensions, it will be interesting to see how this looks and feels in the metal – so until then I shall reserve full judgement.

The new 42mm Oystersteel Explorer II, will retail for £6,800. For more information on the new Explorer II, visit rolex.com.