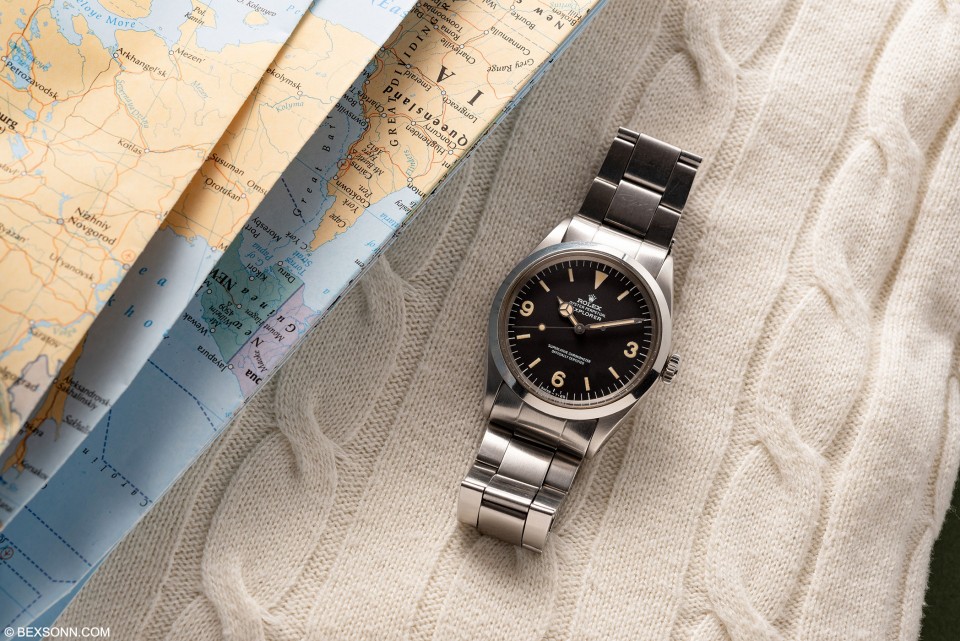 The Explorer is perhaps one of the most underrated watches from the Rolex sports range line-up, but this doesn’t diminish its notable feats. The humble and diminutive 36mm wristwatch that is easily distinguished, even from afar, by its iconic 3-6-9 dial is an everlasting constant. As you are likely aware, Rolex is one of the biggest brands in the world, if not the biggest and their constant involvement in exploration and numerous projects to put their wristwatches to the test, are too often forgotten. Like many of the watches that they’ve designed over the past decades, including those that have come and gone, Rolex emphasis has always been on reliability, quality and value and no other watch makes this statement more poignant than the Explorer – which has been in production since 1953.

The earliest Explorer-type watches date back to the 1940s, however, it is the reference 6098 & 6298 which are known to be the precursors to the Explorer and often referred to as the pre-Explorer. These watches featured what were known as bubbleback cases – or Ovettone – to facilitate the rather thick calibre A296. However, they didn’t yet quite resemble what we know today as Explorer dials, but featured Oyster dials with applied arrow markers and applied coronet, often referred to by collectors as “Everest” dials. That said, no Explorer could really be considered an “Explorer” without the iconic 3-6-9 dial, and though this was a dial layout that had been used before, Rolex officially used the black 3-6-9 dials in the reference 6150 and 6350 – the predecessors of the 6098 and 6298.

Nonetheless, these new models still shared the same “Ovettone” case and still made use of the A296 movement, but they were true Explorers. The 3-6-9 dials, with a large triangle at 12 o’clock and printed text, coupled with the moniker – Explorer gave birth to an iconic watch. These are what collectors consider the first proper Explorers. The difference between the two models was that the 6150 was given the name Precision, whereas the 6350 was afforded the title “Officially Chronometer Certified” or OCC for short. However, there was also the highly sought-after honeycomb dial version, which is highly sought-after by collectors alike.

With a knack for forever pushing the boundaries, in the mid-1950s Rolex introduced the in-house built and designed calibre 1030 chronometer certified movement. This new movement allowed for a sleeker case design, giving birth to the reference 6610 around 1956. The slimmer case allowed the Explorer to now sit closer to the wrist, perhaps giving it a more organic feel, while retaining the same dimensions. The 6610 also retained the standard Explorer look, with a black 3-6-9 dial, triangle at 12 o’clock and Mercedes hands, though some also came with white centre seconds hands. However, the dials were now more uniform, with gilt lettering but of course being Rolex there were some very rare examples too. These displayed an extra line of text beneath the wording Explorer; a depth rating (50m = 165ft) in either silver or red (as pictured above).

The reference 6610 lasted just a few years shy of a decade and in 1963 Rolex introduced the Explorer ref. 1016, which went on to become one of the longest-running sports watch references in history. Production on this timeless Rolex sports icon stopped in 1989, however, not a lot changed during this period – if at all…

As mentioned, the 1016 has always been the Rolex sports watch that has somehow sailed under the radar, in comparison to the brands big hitters; such as the Submariner, GMT and Daytona. The no nonsense of the 3-6-9 p dial perhaps lends to its more simplistic nature and by virtue probably makes it more underrated and underappreciated. That said, it is likely the reason why it remained hardly unchanged for nearly 30 years, aside from the move from gilt gloss dials to matte ones. Oh and the move from the calibre 1560 (non-hacking) to the calibre 1570 which had hacking seconds. The only other Rolex that even comes close to the longevity of the 1016 is the Submariner 5513, so the 1016 is somewhat unique in this department.

Another department in which the 1016 perhaps excelled was in its case design. We all know the countless stories out there that recall the Explorers connection to the summit of Mount Everest but have you ever taken a moment to consider that technically all the Explorer was, was a simple 36mm Rolex Oyster and the only thing that distinguished the Explorer (most importantly the 1016) from the others was its dial layout? While this is fundamentally true there is one other factor that perhaps made the 1016 a much more robust outfit, even over its predecessors. The 1016 was the first reference from the Explorer lineage to feature a case that was waterproof up to a depth of 100m, before this point it was only half this amount.

But how was this achieved in a case just as slight as the DateJust and previous Explorers? Rolex came up with a couple of simple solutions that overall had greater impact: 1) they installed a domed crystal that was thicker and 2) a round case back gasket. While these were the defining factors which made it more robust, Rolex also added thicker spring bars and also gave you the choice of choosing whether to opt for a different lubricating substance that allowed the watch to still operate as per normal at low temperatures. The Explorer 1016 did have a much more measured approach than perhaps initially thought, while the differences were rather subtle the outcome was evident.

As mentioned, the 3-6-9 dials, with a large triangle at 12 o’clock and printed text, coupled with the moniker – Explorer gave birth to an iconic watch but what made this layout stick was its legibility. When you think about it, considering the conditions the Explorer was made for, ease of reading the dial in tough circumstances, such as climbing a mountain was most paramount. Also, the introduction of Mercedes hands to the Explorer also enhanced visibility. The only change that took place to the reference 1016 over the years was the move from radium to the much safe tritium denoted by new “SWISS T<25” or “T SWISS T” on the edge of the dial at 6 o’clock, and of course the switch from gilt to matte. If there was need or any further proof of just how iconic this dial was, even the great Submariner took inspiration from the Explorer, with the use of the 3-6-9 dial layout in the early reference 6200.

Apart from the dial, case and movement – what truly makes the 1016 so desirable is it versatility. On the wrist, the 36mm case is a perfect fit and I’d even go as far to say it wouldn’t even look out of place on anyone with much larger wrists. Like most Rolex watches fitted with an Oyster bracelet, it is a comfortable fit and what’s more it pretty much works with any attire. While it is perhaps not as dressy as the gloss dial iterations, including its successors (14270, 114270 & 214270), the 1016 may just be the most beautiful Rolex sports watch ever made! Hence the reason its getting increasingly difficult to find a nice example and even when you do, you’ll notice just how expensive they’ve become.