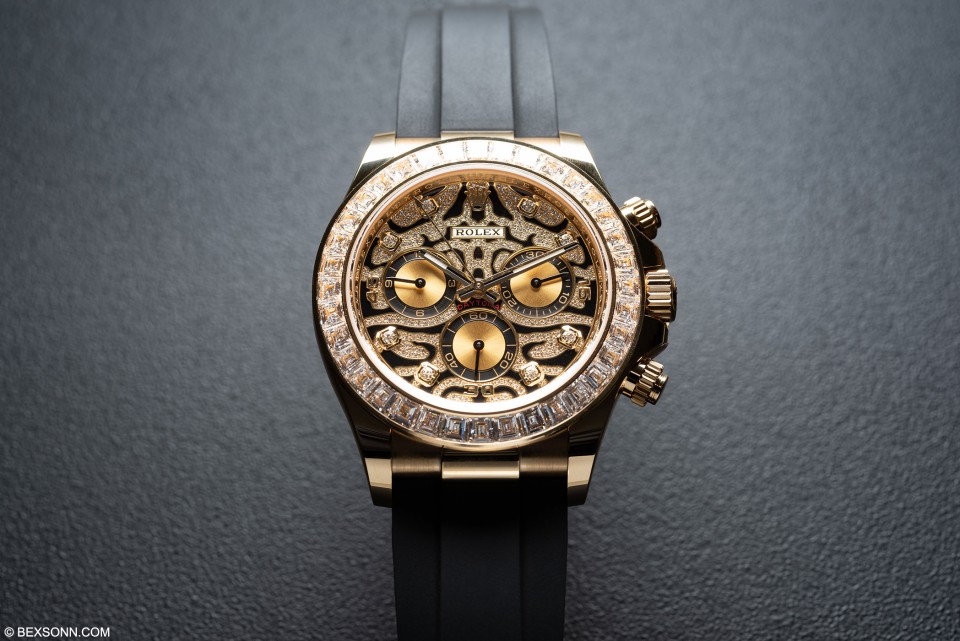 I am going to say it straight up – Rolex is really testing the power of its branding with this one. For the longest time, Rolex has been one of the most recognisable and reputable brands in the world with a huge following of loyalists and brand equity that has been building up over the decades. Words such as quality, prestige, luxury and cool have been associated with the pointed crown and with the rise of vintage Rolexes and huge wait lists for modern Rolexes, it seems that the brand itself is invincible. 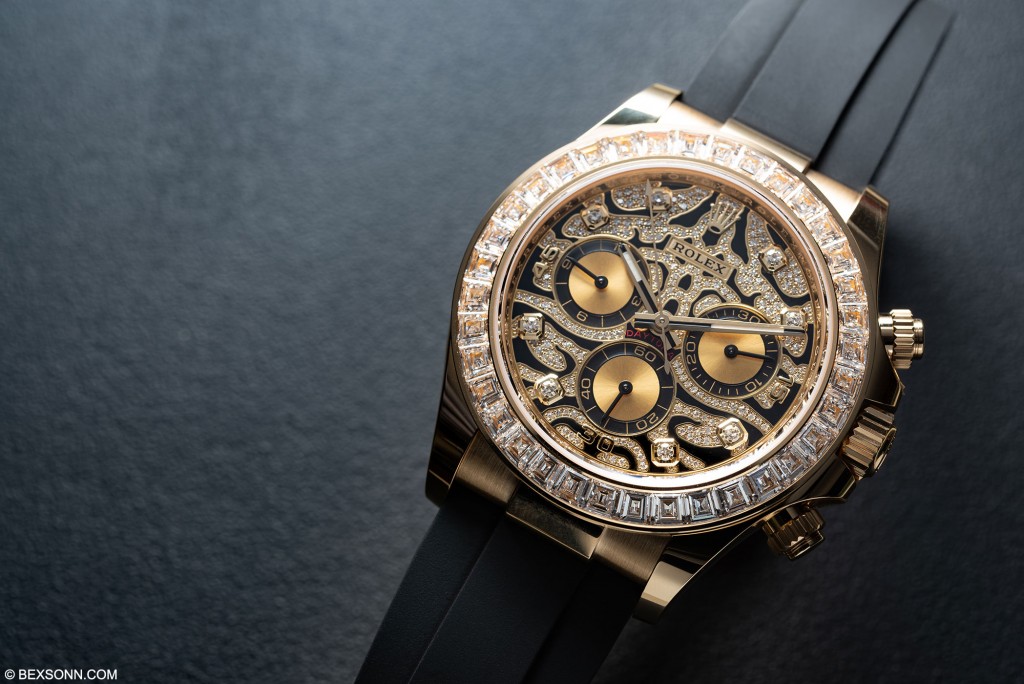 In Basel 2019 this year, Rolex surprised us all with an absolutely insane Daytona- the Ref 116588TBR. I mean, I’m sure most of you would have seen the photos already before clicking on this article so you know exactly what I’m talking about. A 40mm solid gold Rolex Daytona, it comes with a paved black lacquer dial, which has a sort of pattern on top of it set with 243 diamonds. The hour markers are set diamonds with champagne coloured subdials. The bezel is similarly in solid yellow gold set with 36 trapeze cut diamonds and the whole thing is finished off with Rolexes proprietary Oysterflex rubber strap.

With such a privilege of brand power and coolness, naturally comes biases and I will admit it myself, I am a sucker for it – I love the Rainbow Daytona (What?!). Gem set and intricate Rolexes have been a staple of the brand’s line up for a long time, polarising itself with the original ethos of ‘tool watches for professionals.’

I feel that Rolex has always played with this contradiction, and probably even had some fun with it. I mean think about it, we have a diamond encrusted Daytona 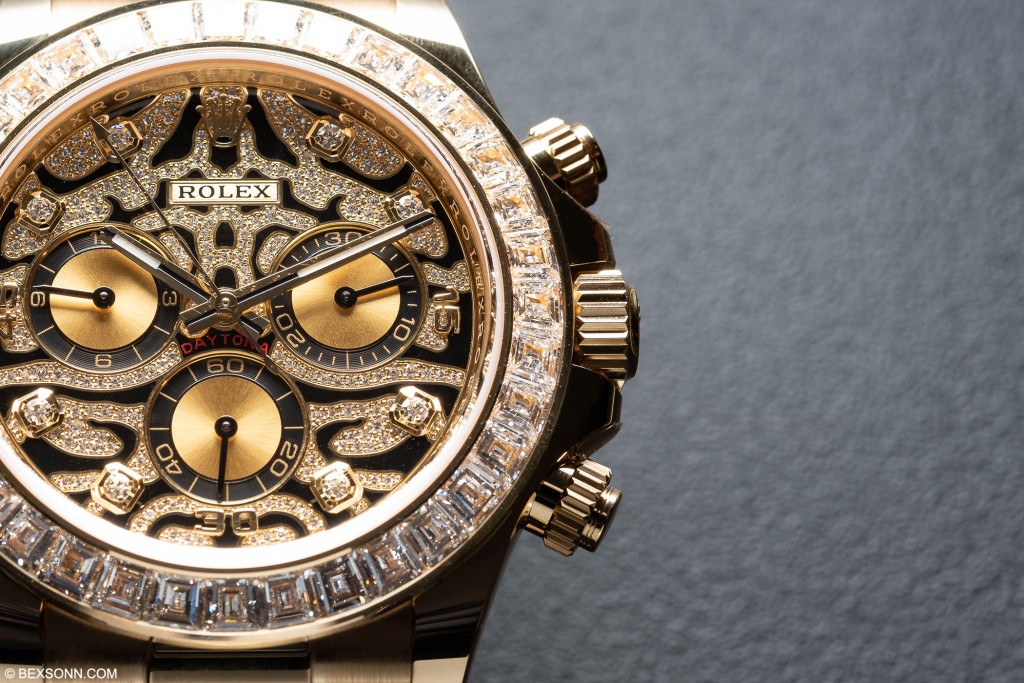 with essentially a tiger print on the dial (or maybe they were going for a Rorschach look?), which is pretty fancy, paired with a rubber strap that is essentially something rooted in utility. This absurdity is pretty interesting to me and well, while I may not be so crazy about this iteration of the Daytona, I love this idea of dissonance.

Rolex has truly entered an era of luxury and has evolved overtime to be a symbol of wealth, a Veblen good, rather than something truly functional as it was back in the 20th century and so I suppose they do have the room to play with ideas like this. 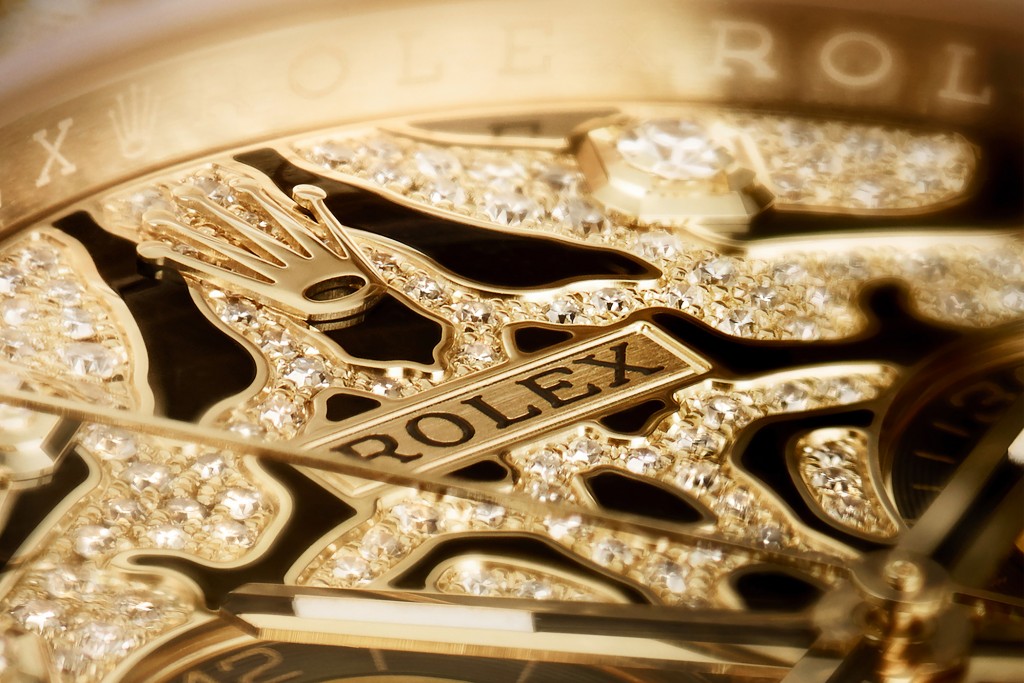 Some of the famously outrageous gem set Rolexes include the Rainbow Daytona, which trades for multiples its retail, the GMT Master SARU with a Pepsi bezel set with baguette sapphires and rubies and who can forget the Leopard Daytona! The point I’m getting at is that, if a brand with less ‘power’ made something like this, say Omega or Jaeger-LeCoultre, they would be absolutely crucified for creating such an abomination but because its Rolex, well – I guess it’s kind of cool. Can you imagine a Leopard Speedmaster!? 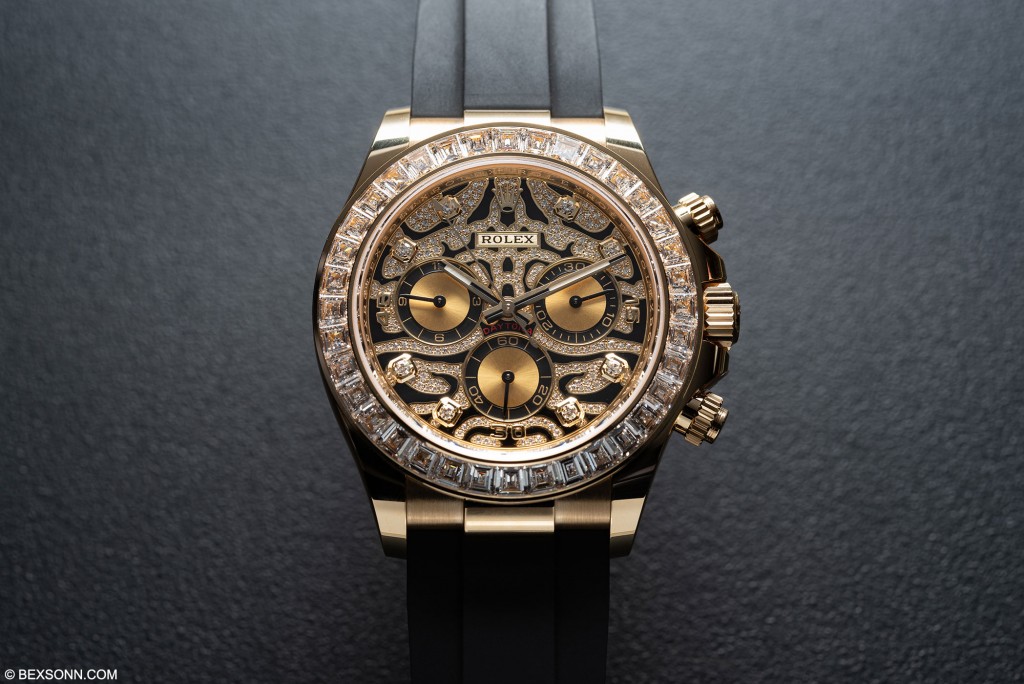 To be fair, we as humans have always been like this. Everything is rooted in perception rather than fundamentals and desirability is gauged based on what the media says. Rationality plays no role and Rolex knows this. They remain the masters of branding and marketing and as long as they continue to sell their main models and maintain the status quo, they will be free to create these wild watches and command a huge demand for them. Hats off to the brand, as they’ve achieved something that not many brands have.

As for this 18-carat yellow-gold Daytona reference 116588TBR, no pricing has been indicated, which means Rolex is telling you that, it is so in demand and quantities are so low that we don’t have to share this information.