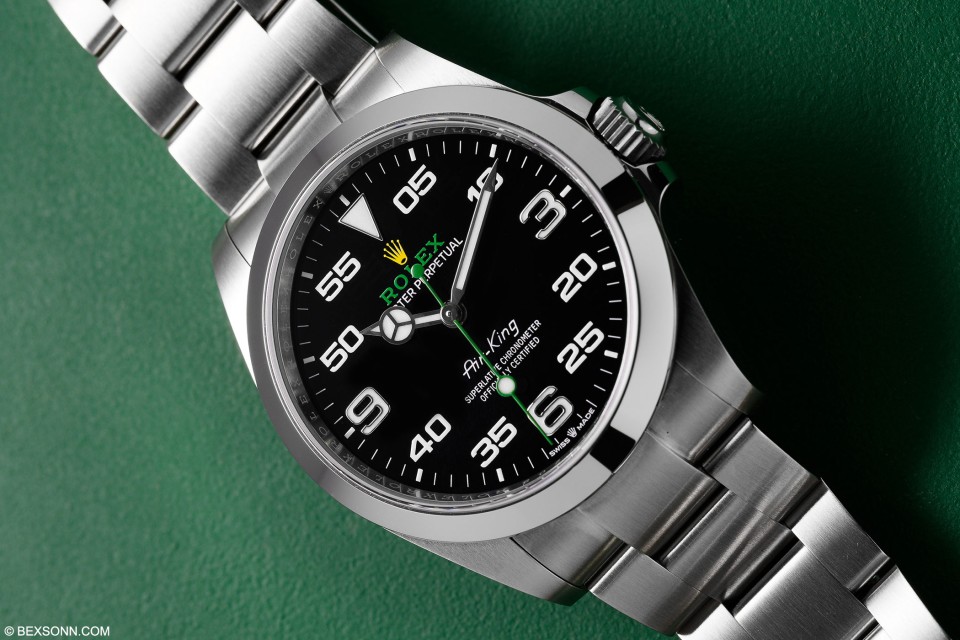 The Air-King has been a mainstay in the Rolex collection for many years, but it’s always been one of those watches that have been largely misunderstood. For most of its existence, it’s always been one of those watches that’s been seen as the perfect introduction to Rolex – the ideal Rolex to get one’s toes whet but it’s much more than that. You see, the history of the Air-King dates to 1945, when Rolex released the “Air” models all for the British Royal Air Force. At the time, the “Air” model line was made up of the Air-Lion, Air-Tiger, Air-Giant and of course the Air-King, though the Air-King was the only model that continued its production – with the first model being commercially available in 1958. 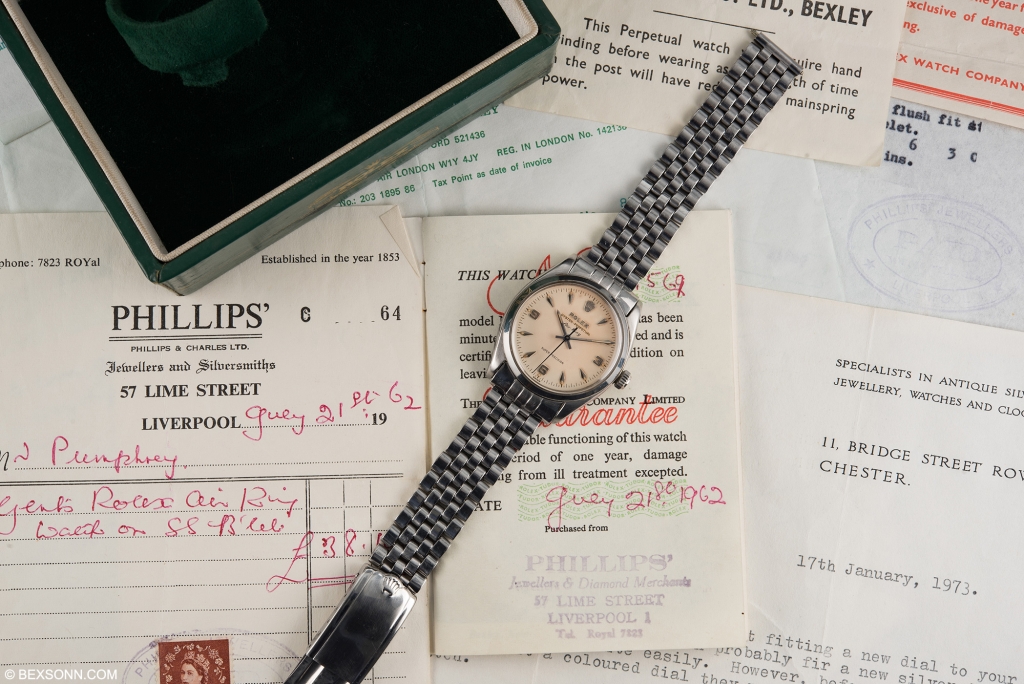 Throughout the many decades the Air-King has been in production, it was only typically available in a 34mm to 36mm case, with all models closely mirroring the case of the early Oyster Perpetual Explorers but obviously these models bore the name “Air-King” on the dial in an Italic typeface. As mentioned, these were mostly seen as watches that introduced new wearers into the Rolex brand and the reason behind this is that they were consistently affordable and came in a wide variety of styles. However, in 2014 Rolex put an end to the longstanding Air-King collection. In 2016, during Baselworld, Rolex re-launched the Air-King with the ref. 116900 – the heir apparent for one of the most successful and most produced models. This new model sported a 40mm case, a dial more akin to a speed-o-meter and for the first time featured the coronet and Rolex inscription in a vibrate hue of yellow and green, respectively. 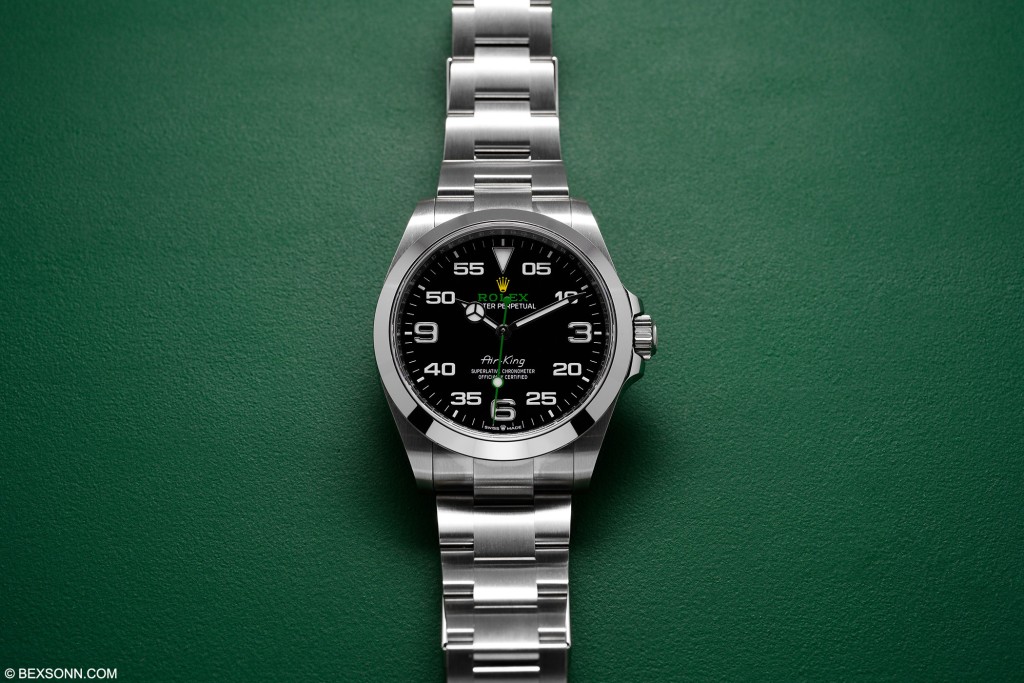 Though it’s not clear how well this 2016 Air-King performed, one thing that is most definitely know is how divided people’s opinions were on said piece. Fast-forward to 2022, and Rolex have given us a new Air-King and while the changes they’ve made are not all instantly obvious, it does appear to be more balanced. 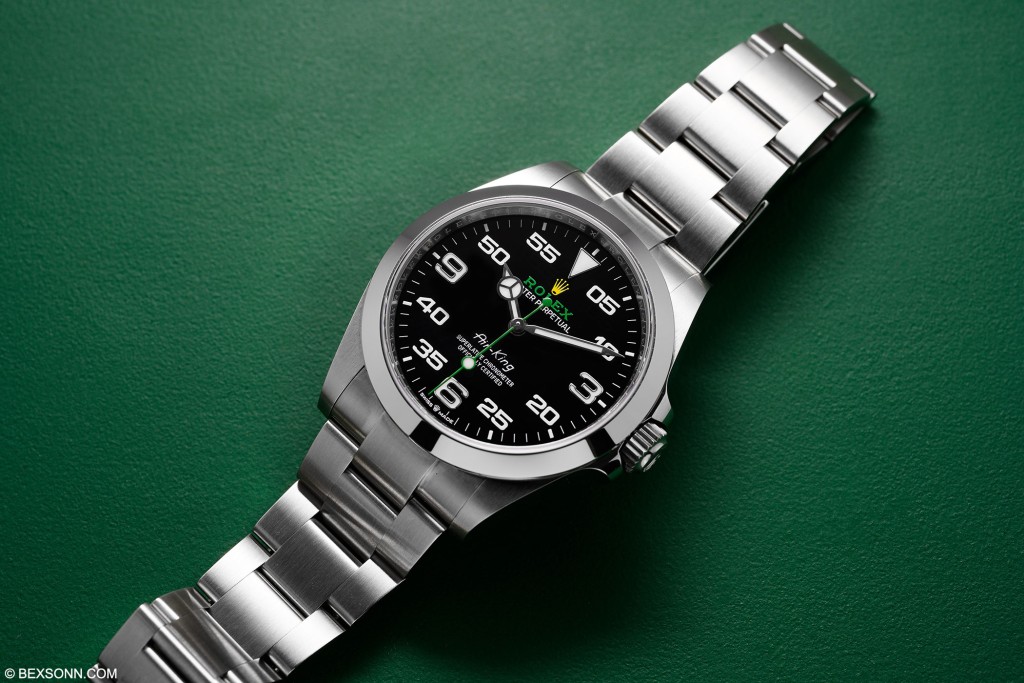 The new Oyster Perpetual Air-King features a completely redesigned case with crown guards and straight sides, which now brings this model into the realm of the professional sports models, thus the case remains at a reasonable 40mm in diameter. On top of this, the bracelet has also been revisited, with a minor tweak being made to the centre link and the addition of an Oysterlock safety clasp, a first for Air-King. 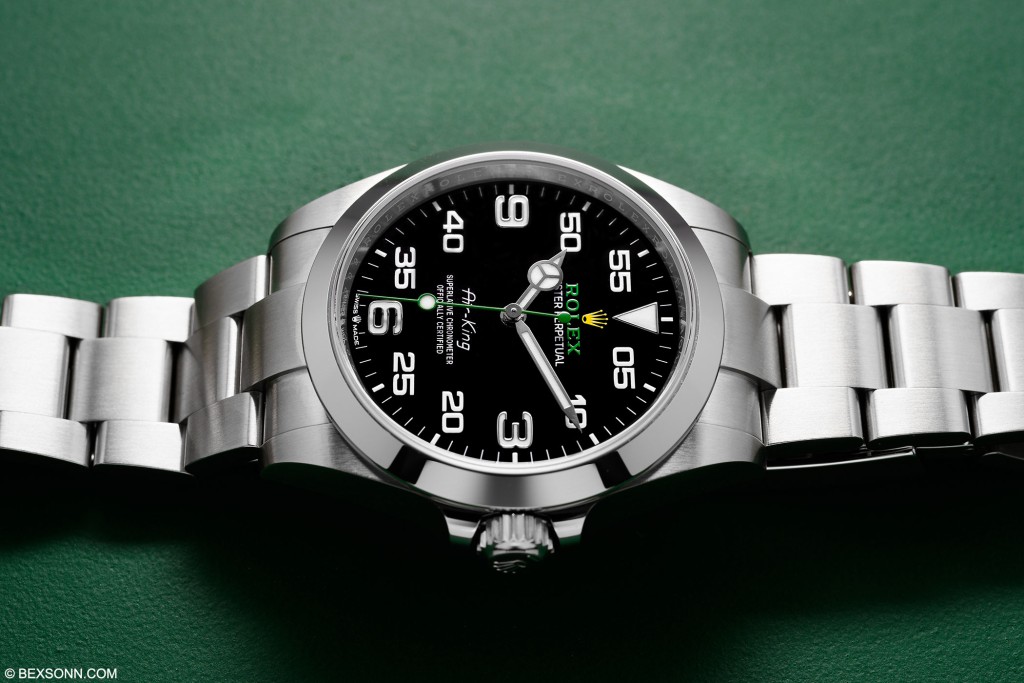 The other new feature of this Air-King is the refreshed dial and unless you have the previous version side-by-side with this new one, it’s kind of difficult to notice what’s changed. To add more balance to the dial Rolex have added a zero before the ‘5’ on the minute scale, so now each five-minute interval is marked by two digits. A rather simple and perhaps unimportant change but the overall balance this now adds to the dial has quite the subtly intended impact. In addition, this new dial now incorporates Chromalight, guaranteeing legibility in dark conditions. If that wasn’t enough – Rolex went a step further and making the 3, 6 and 9 numerals visible in the dark too. The previous Air-King numerals were fashioned entirely out of 18-carat white gold, and where not capable of this small but important detail.

This new generation Air-King is equipped with the in-house self-winding calibre 3230 and like all of Rolex movements, is chronometer certified and boast a power reserve of 70 hours. The calibre 3230 makes use of a blue Parachrom hairspring patented and manufactured by Rolex in an exclusive alloy, as well as a Chronergy escapement, which offers greater resistance to magnetic fields, inherently making it more accurate. As you may be aware by now, all current Rolex movements are COSC certified but Rolex themselves carry out further testing with the movements cased and simulate daily wear, with even stricter tolerances, making sure deviation is no more than +/- 2 seconds per day.

The case for this new Air-King is rather sharp and the addition of crown guards, gives the watch a more tool-like appearance, though having a Rolex sports watch with a bezel that has no function will take a little getting used to. The improved balance of the dial through the simple addition of a zero next to the 5, perhaps says more about the philosophy of Rolex than any other improvement on this new Air-King. With these new updates to the Air-King, it now has its own identity. The last iteration felt very Milgauss-like but with this new release the Air-King has finally come into its own and while many have perhaps focused their attention on the Left-Handed GMT-Master II, this new addition to the sport line-up is the real star of the new releases from Rolex this year.

The new Rolex Air-King ref. 126900 is only available on an Oyster bracelet and is priced at £5,900. More information is available rolex.com.